Running through Cartagena On A Cruise Port Stop

The furthest point south on our 26 day cruise with Oceania Cruises was a day running through Cartagena, Columbia! We looked out from our balcony on the cruise ship and saw the very modern skyline of Cartagena emerge. On one side we saw resort properties.  And on the other a very busy port.  The city of Cartagena was in the middle.

We docked beside another cruise ship and joined our tour leader on the bus. Maria was a wiry woman who had us running through Cartagena!  She took total control over our tour group.  We were hustled too quickly at times from spot to spot.  And she never hesitated to stop traffic while she stood in the middle of the street to explain something. 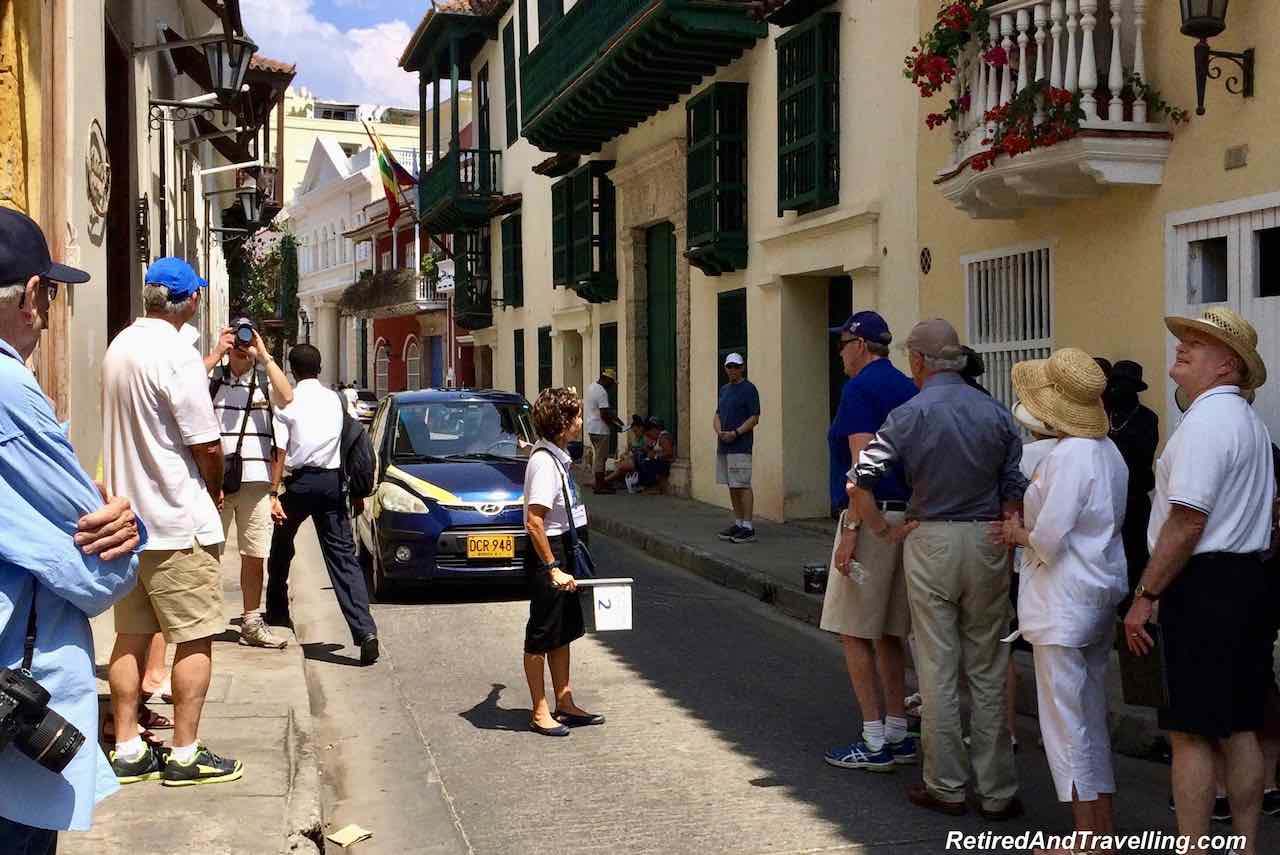 Our first stop as we were running through Cartagena was at Castillo San Felipe on the hill. Maria hustled us past the long line of aggressive street vendors.  They hawked t-shirts, hats, purses and a wide assortment of other tourist trash. She warned us not to pose with women in traditional garb unless we were prepared to pay for the picture. 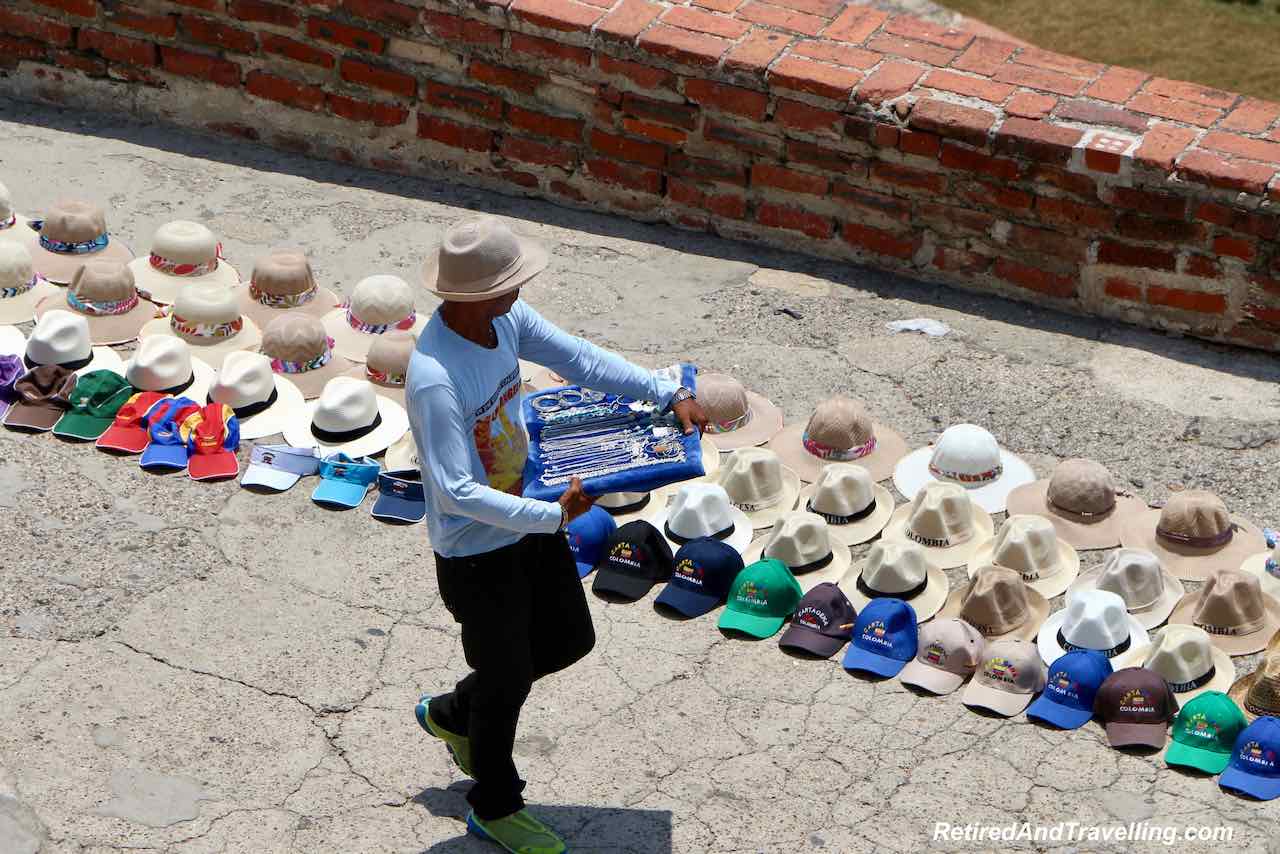 It was a good climb up the ramp and stairs to multiple points in the fort. We had no problem since we climbed so many stairs onboard the ship as part of our plan to not gain a pound a day.  But many of the group struggled and almost went back to the bus. We walked inside one of the many tunnels at the top that led from vantage point to vantage point. 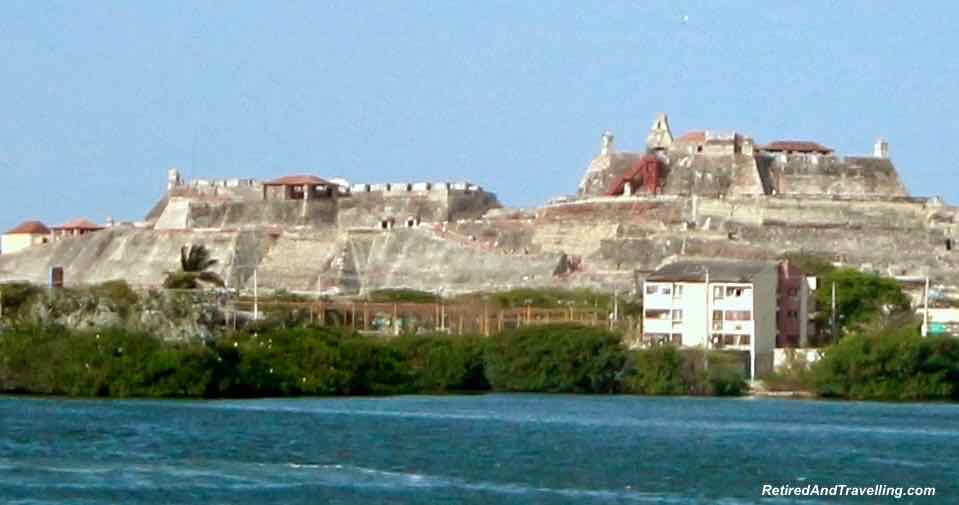 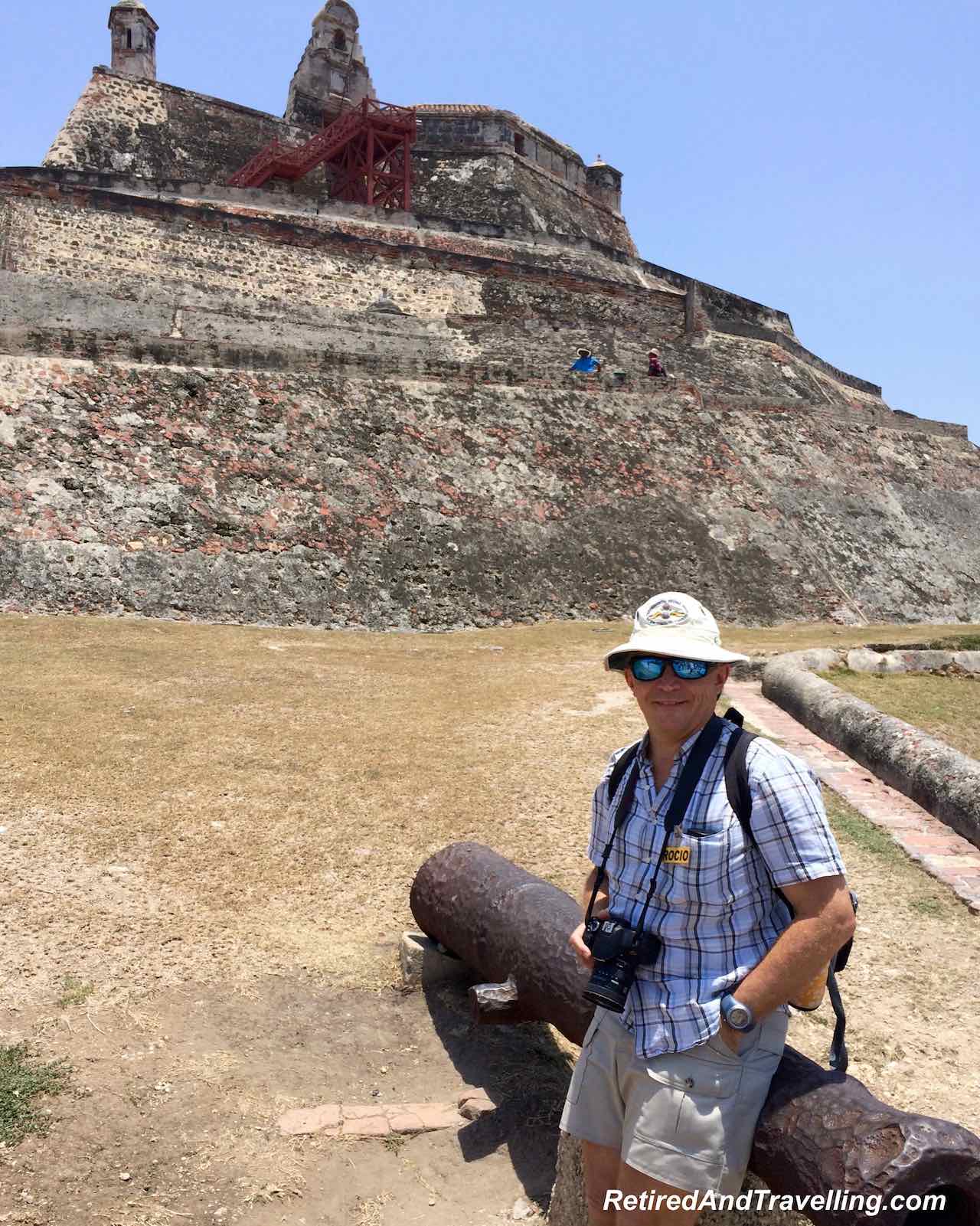 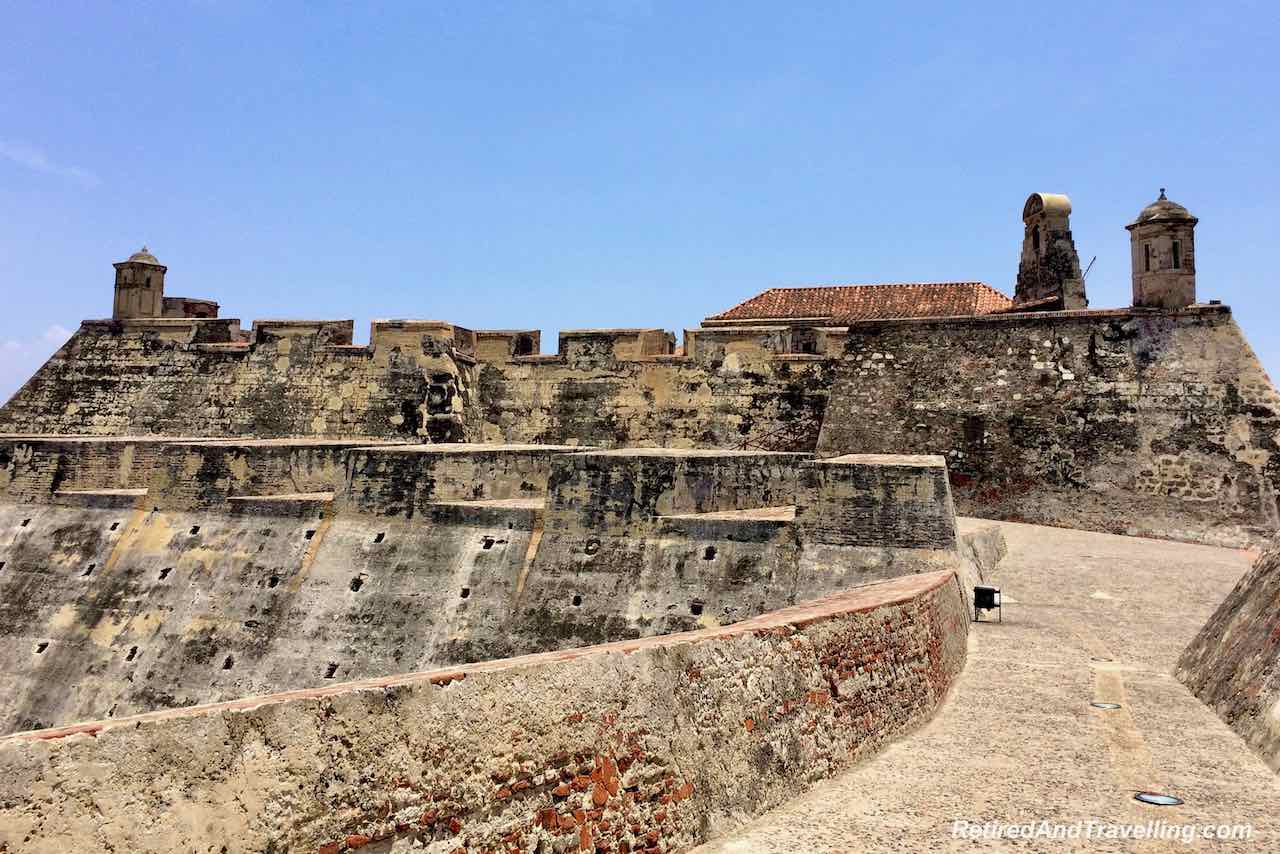 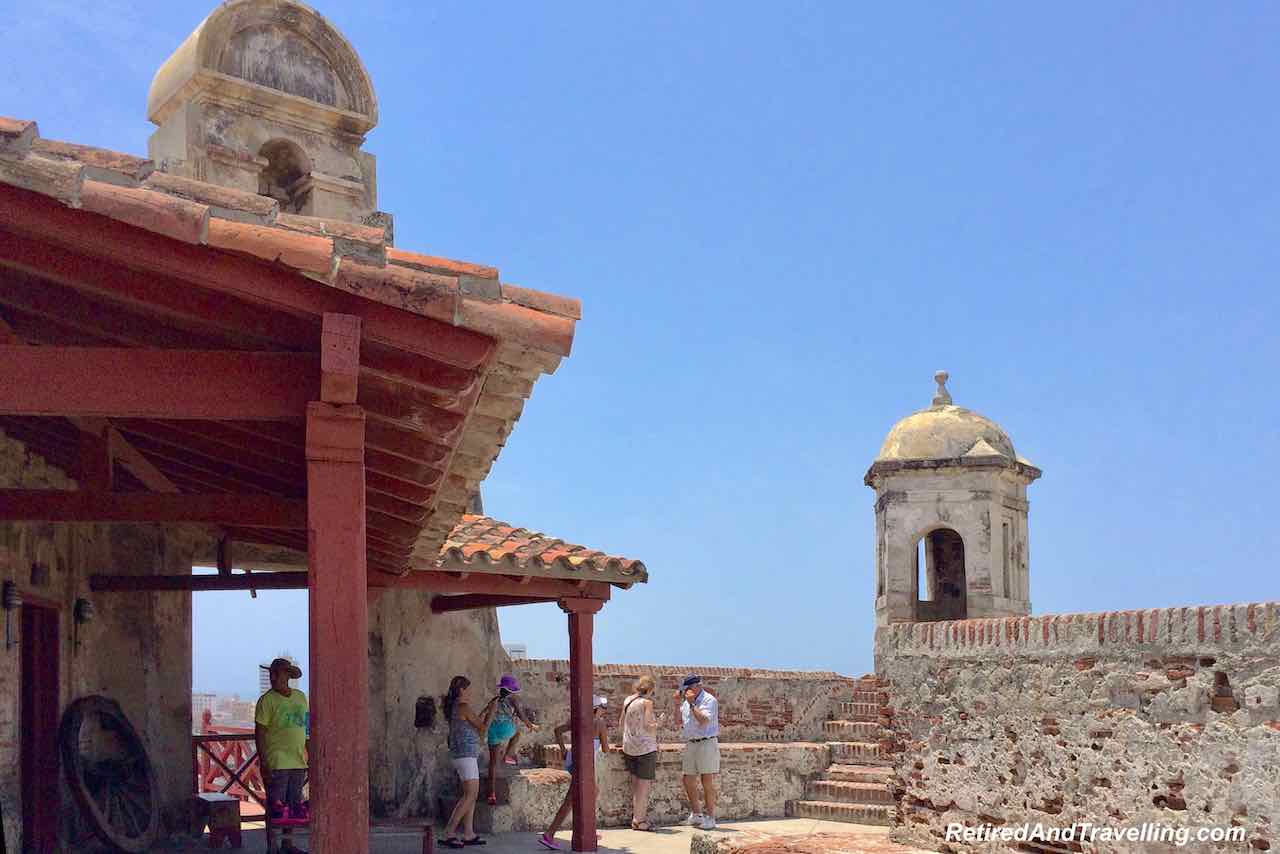 At the top we was the panoramic view of Cartagena.  It was easy to understand why this hill spot had been chosen as a major defence for the city. 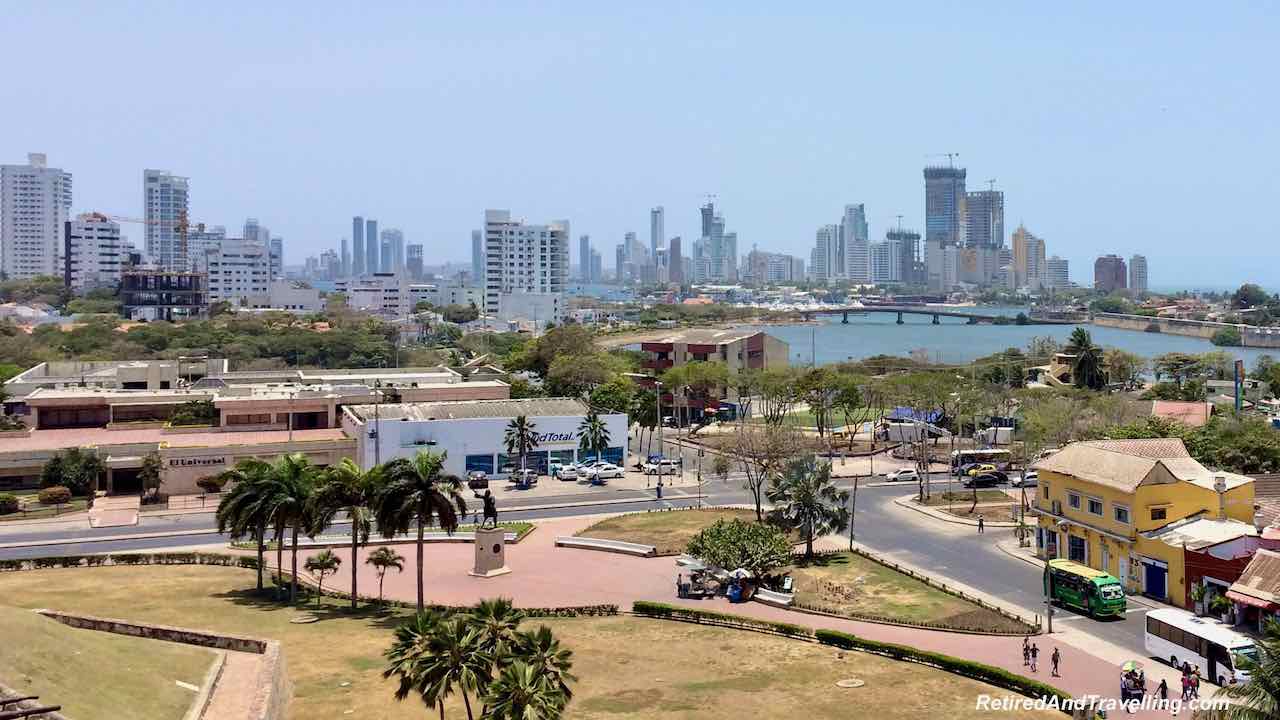 Walking back down, we boarded the bus for our next stop at the dungeons. I had great visions of dark, mouldy rooms.  So I was surprised when we alighted at a row of 23 small shops currently housed in the restored dungeons. We wandered from shop to shop.  But there was nothing we wanted to buy.  The hawkers lining the walkway eventually just became tiresome to dodge.

We went back out to continue running through Cartagena old town to see a few more sites. The narrow streets presented very European balconies overflowing with flowers as we walked towards the central square. We found Cartagena to be a colourful city, filled with artist expression everywhere we looked. 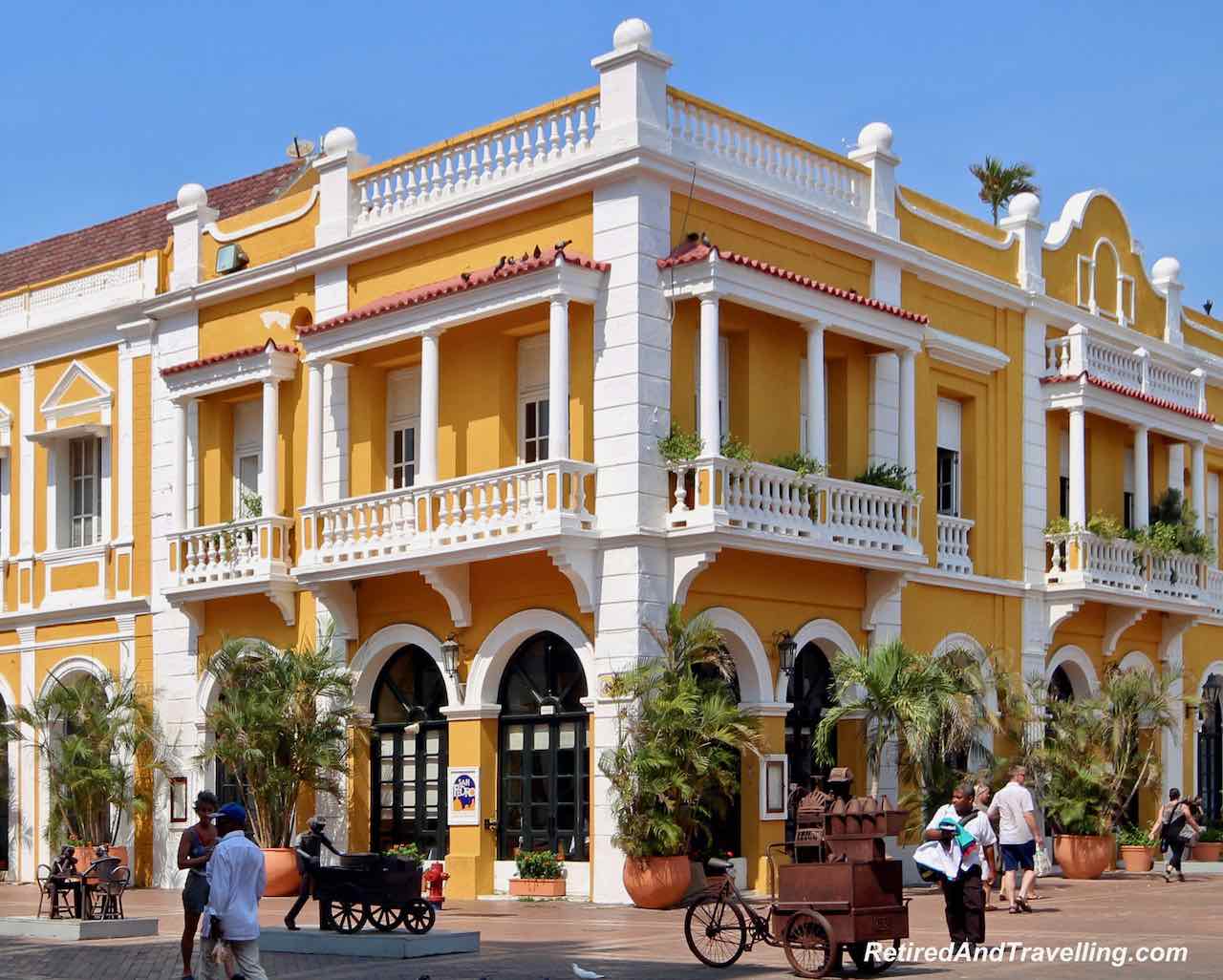 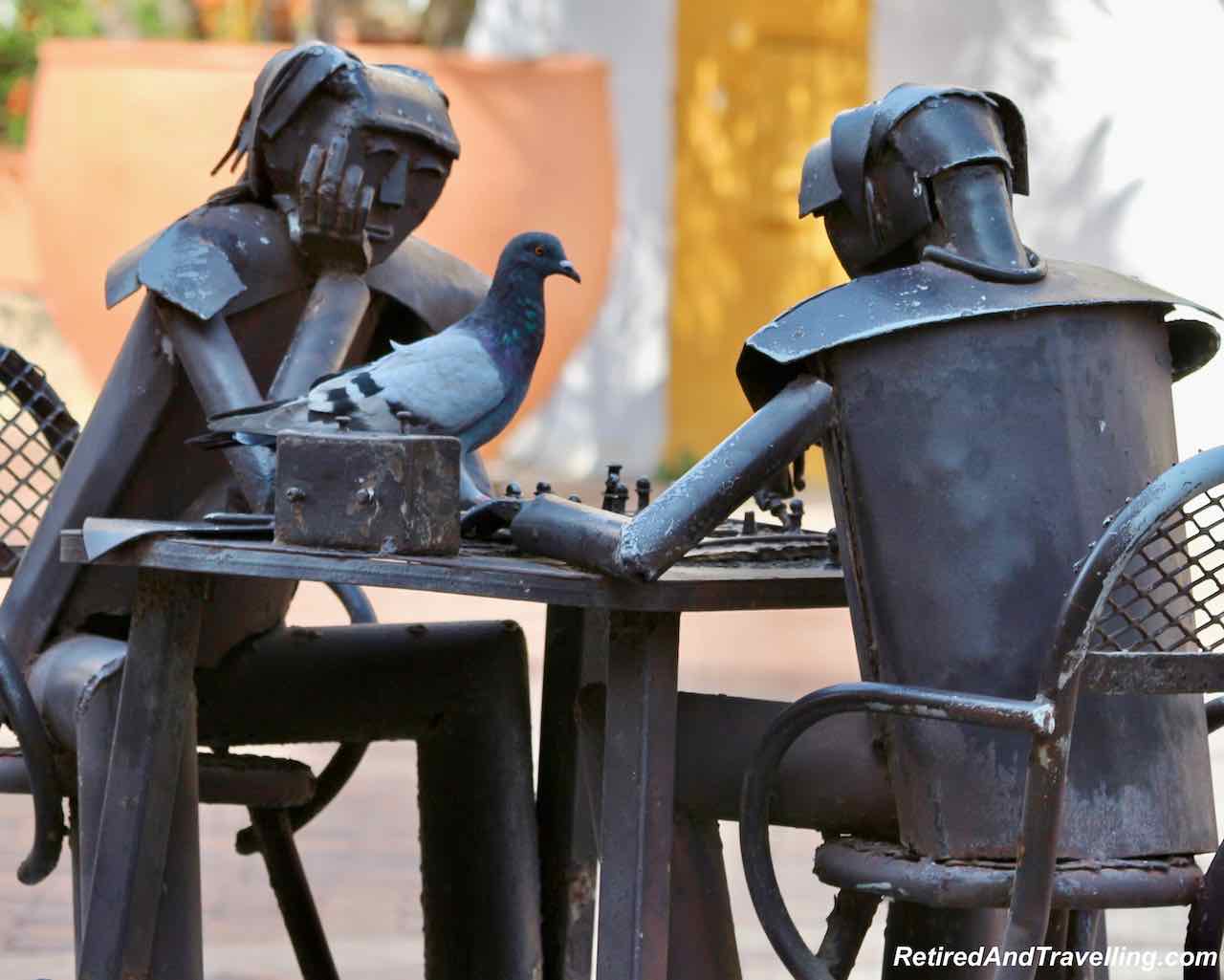 The House of Torture At The Cartagena Inquisition Museum 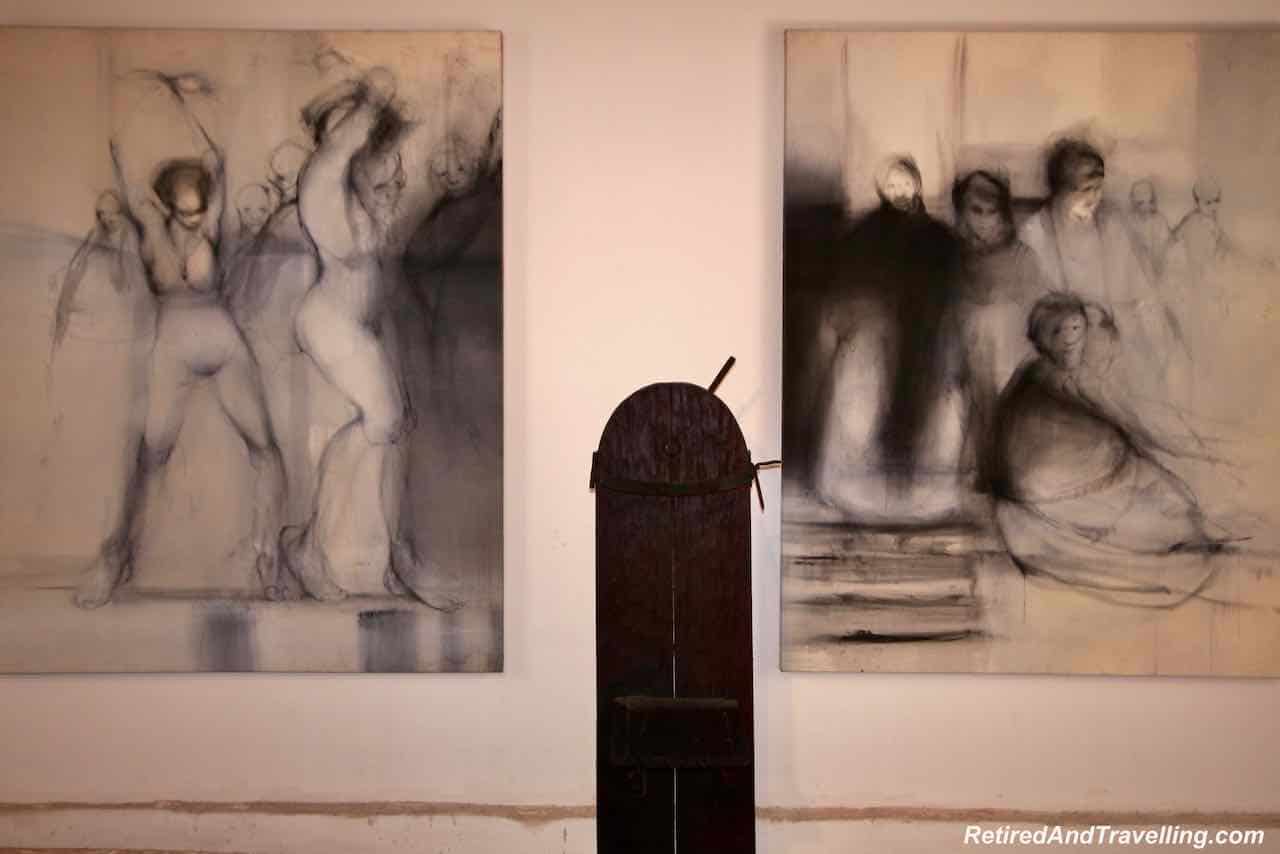 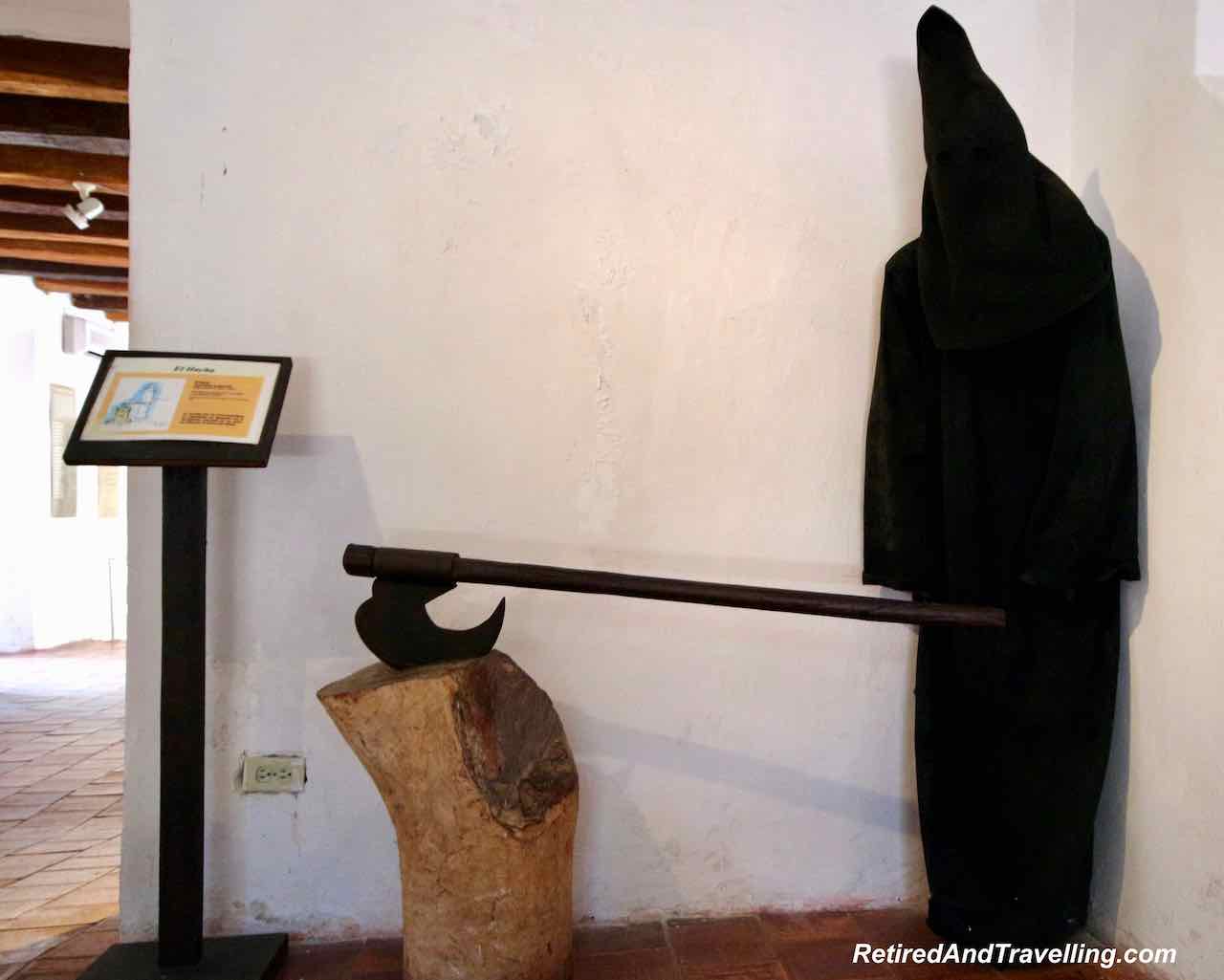 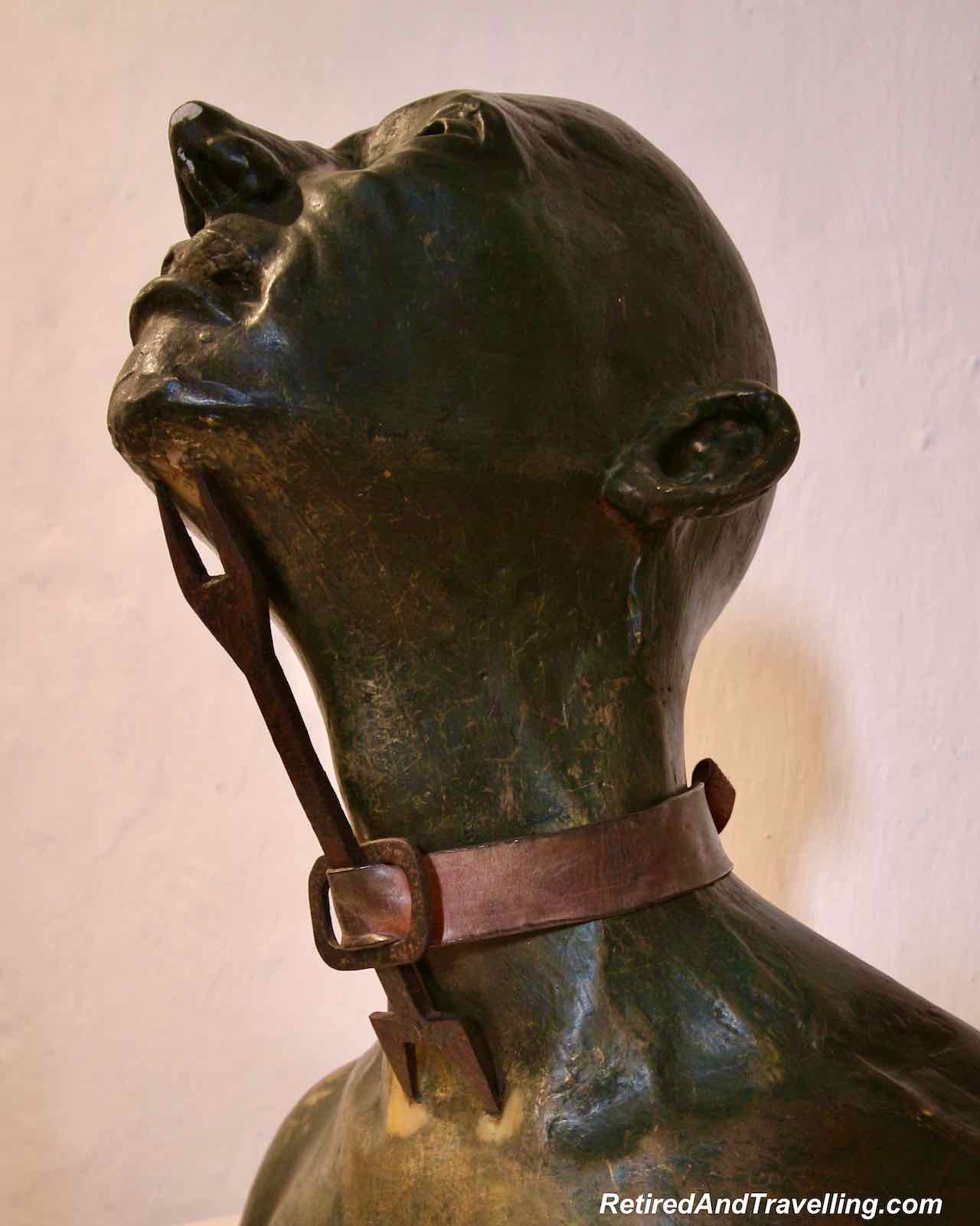 Walking into the main square we were not surprised to find the Juan Valdez coffee shop.  It looked very much like a Starbucks franchise store. We wandered in and checked on coffee prices.  But we were a bit surprised to find they did not accept US dollars. Luckily we found a more local little coffee shop that had a menu in US dollars and they were happy to take our business.

From there we found a courtyard in front of the San Pedro Claver Church. The courtyard was filled with colour and decorated with maybe a dozen different iron statues. The tourists posed with the statues and the birds used them as resting spots. Also found in the square was the statue of San Pedro and one of his followers. 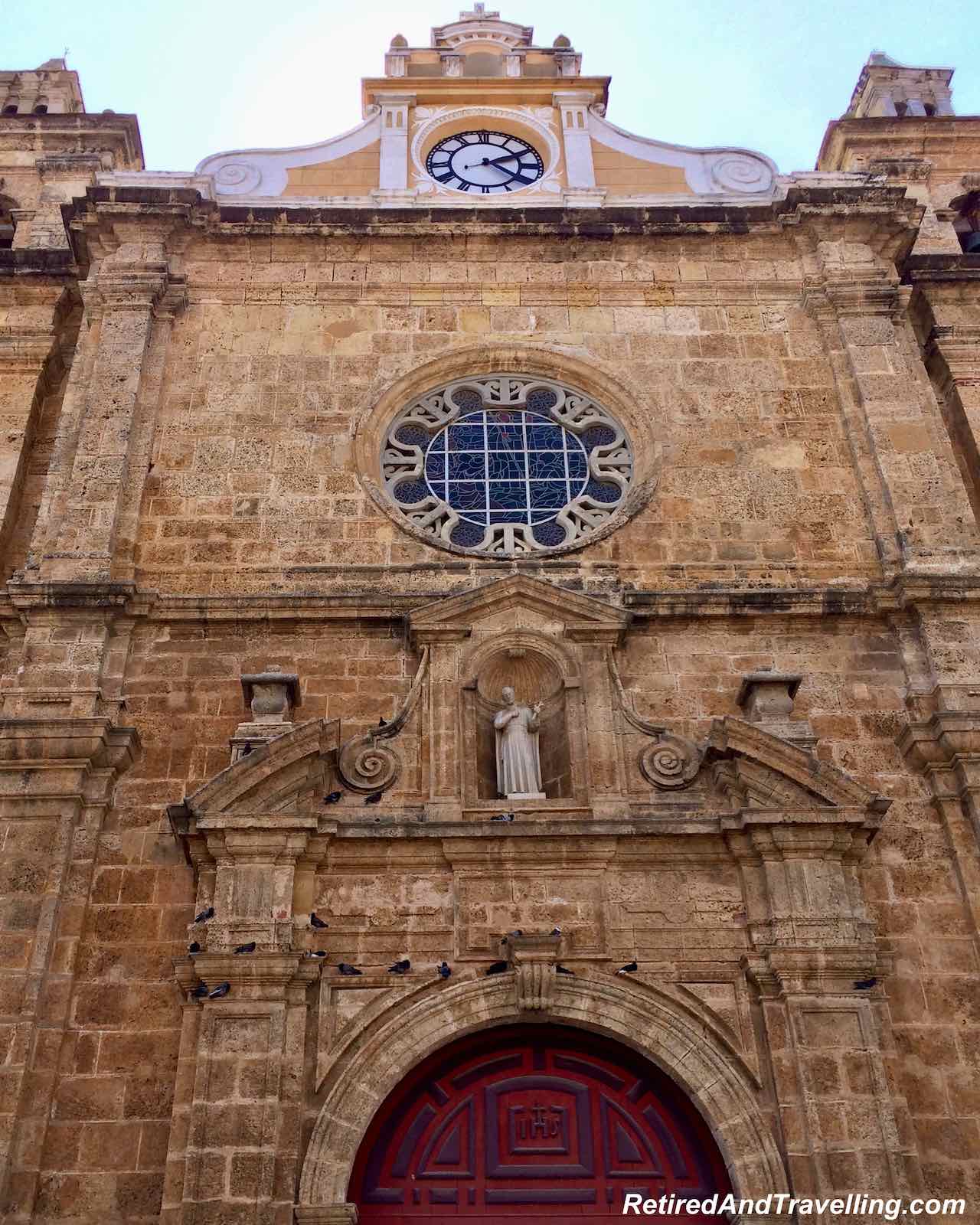 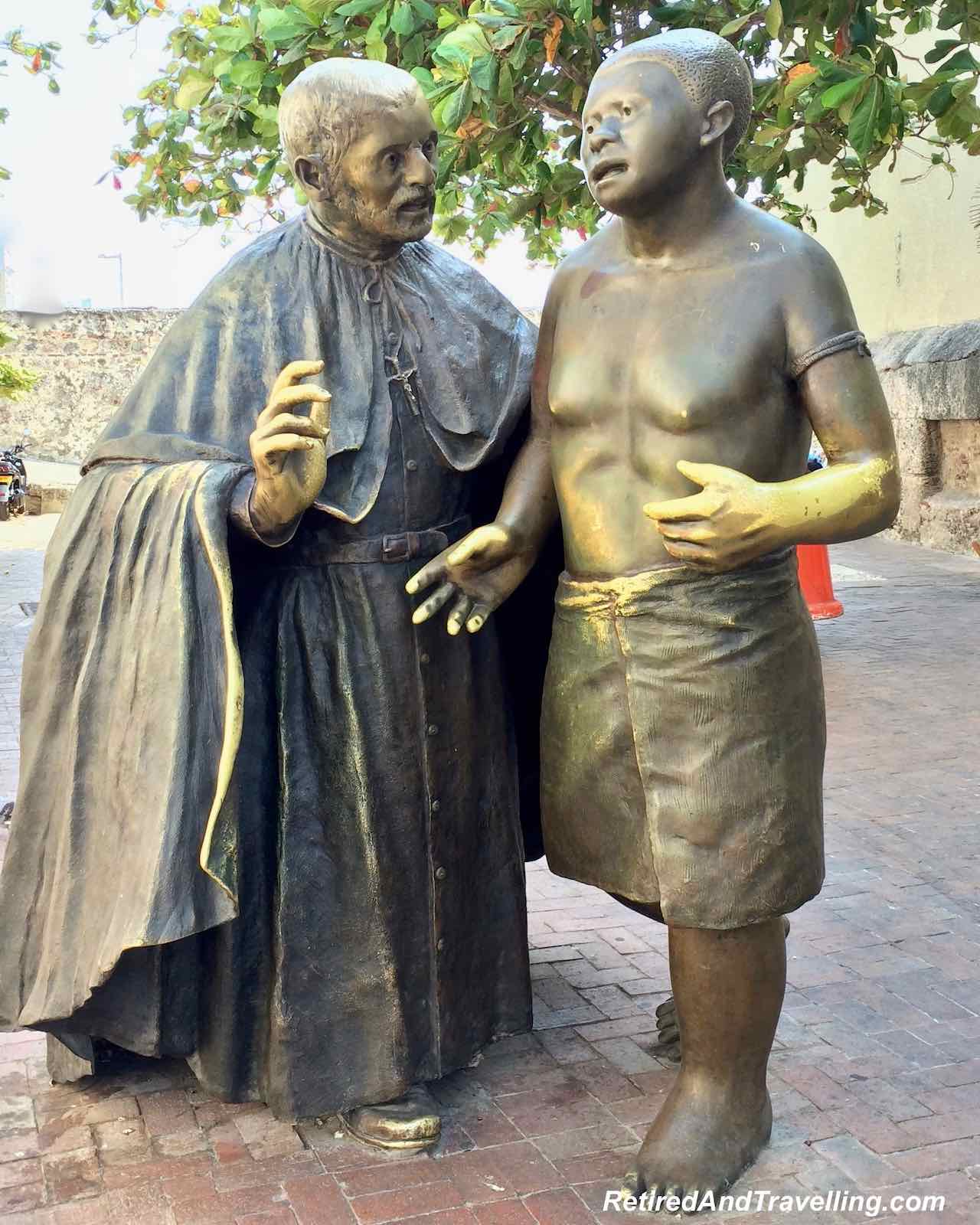 The church courtyard was cool and tree covered.  It led to a more simple church than I had expected to find given the Spanish heritage of Cartagena. There were a few stained glass windows and a nice altar. Beneath the altar there was a glass crypt where the body of San Pedro was found.  Apparently it was moved a few times before finally being placed there. 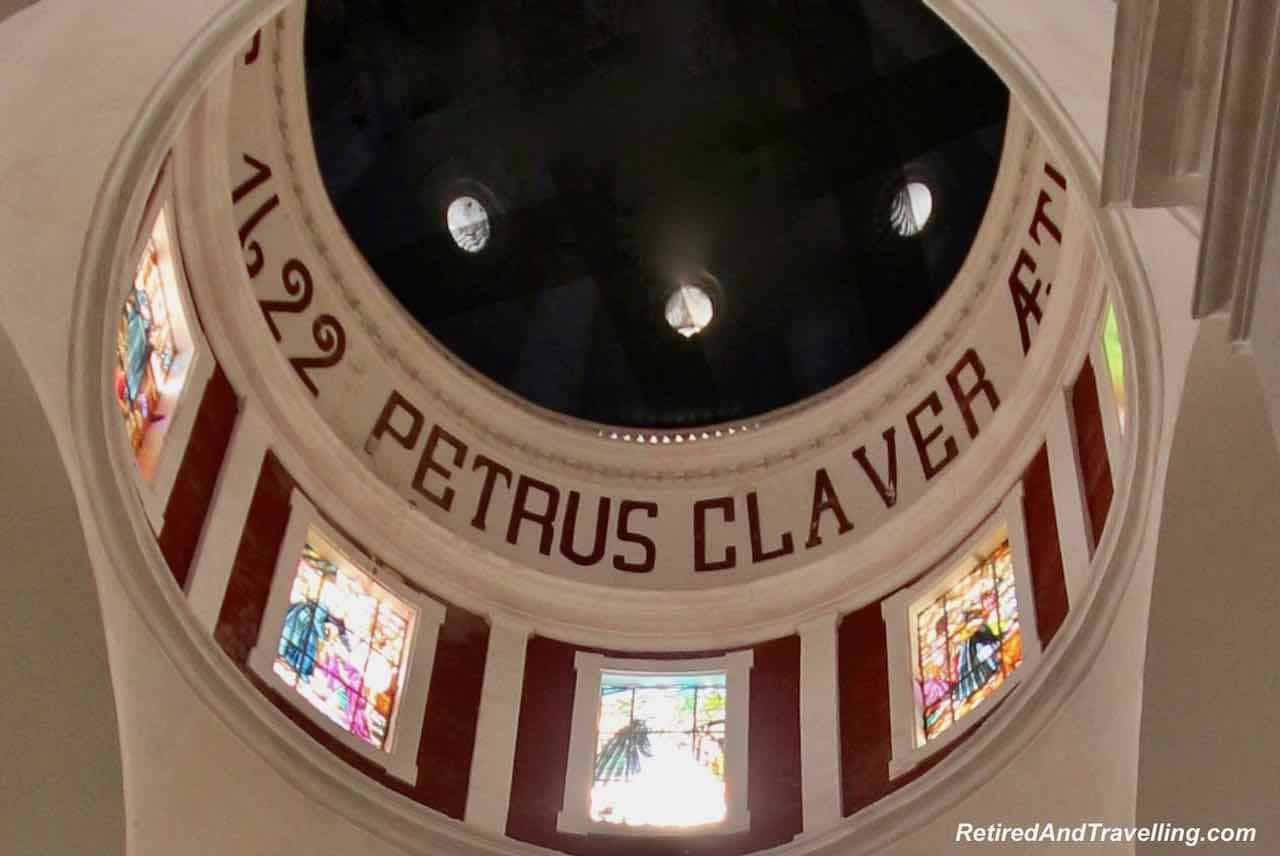 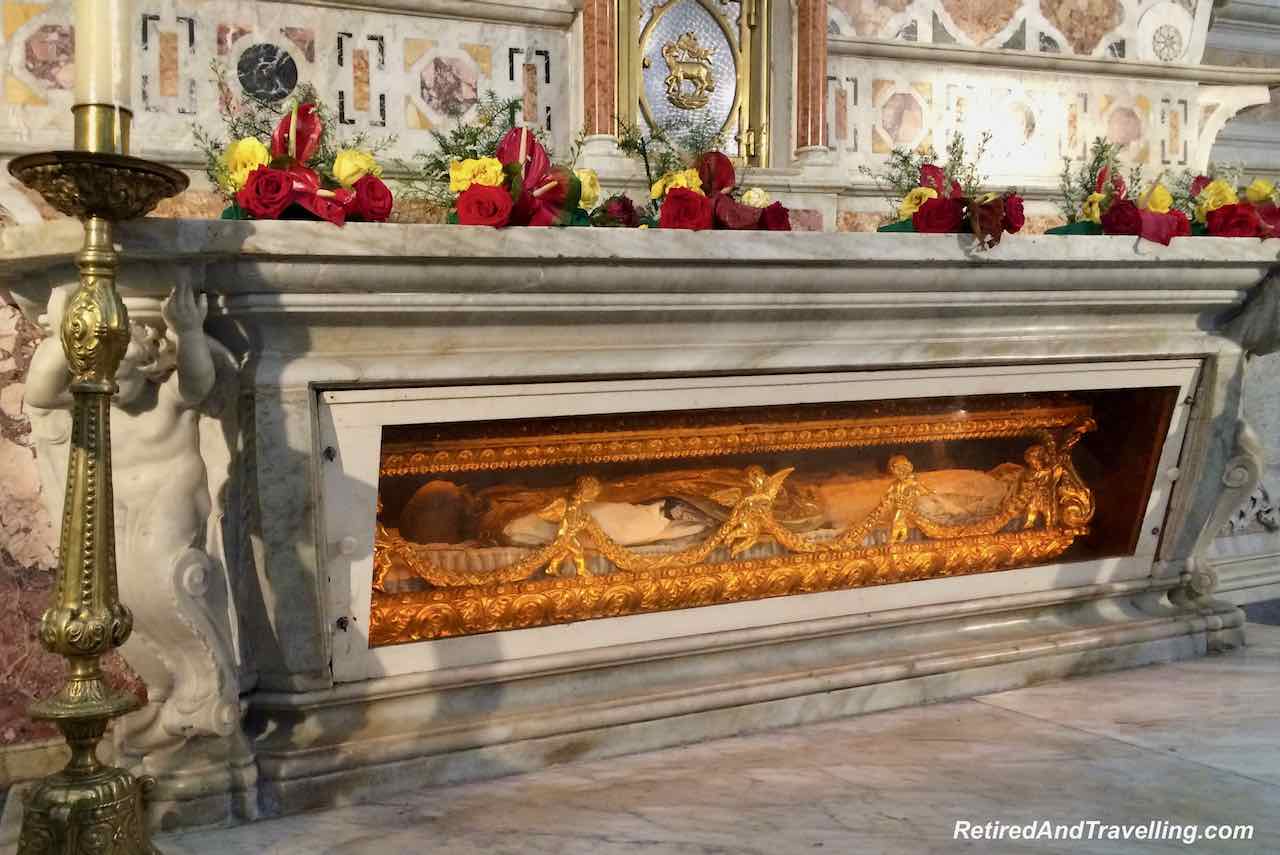 The last thing Maria had for us when running through Cartagena was a very brisk walk through of the Maritime Museum. There were many displays that talked about the maritime history of Cartagena.  This included  the obligatory pirates swinging from the ropes. This might be an interesting place to re-visit when we could really spend some time at the displays. 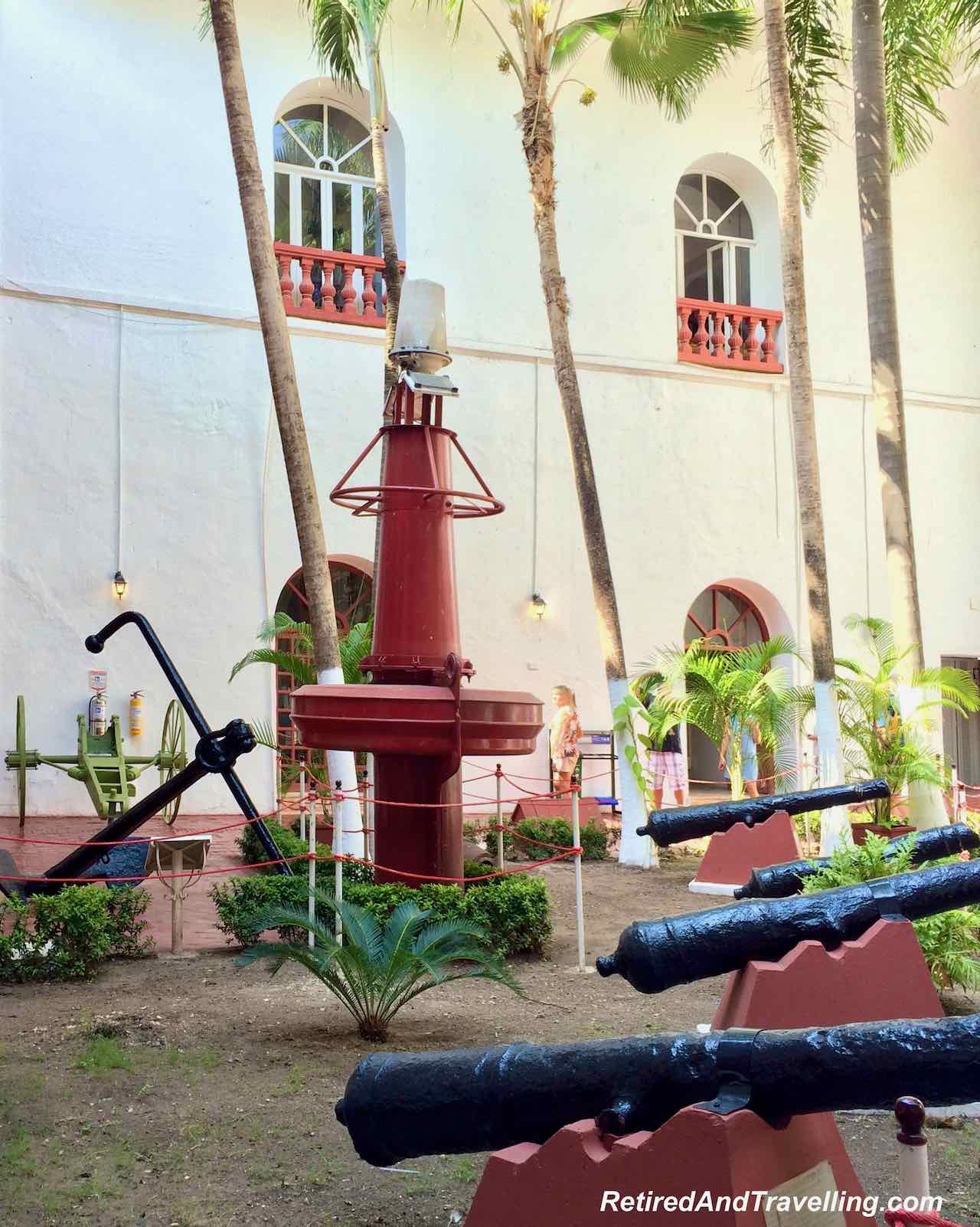 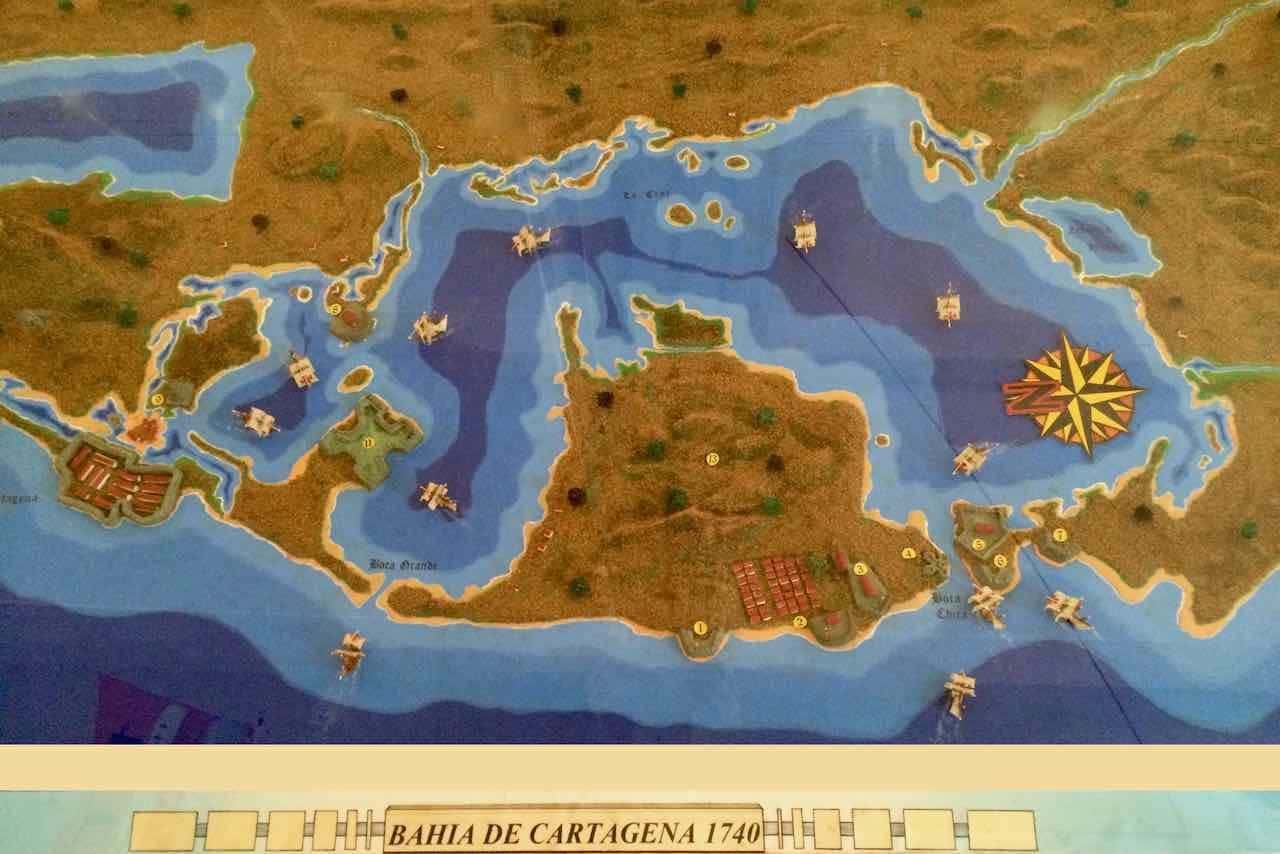 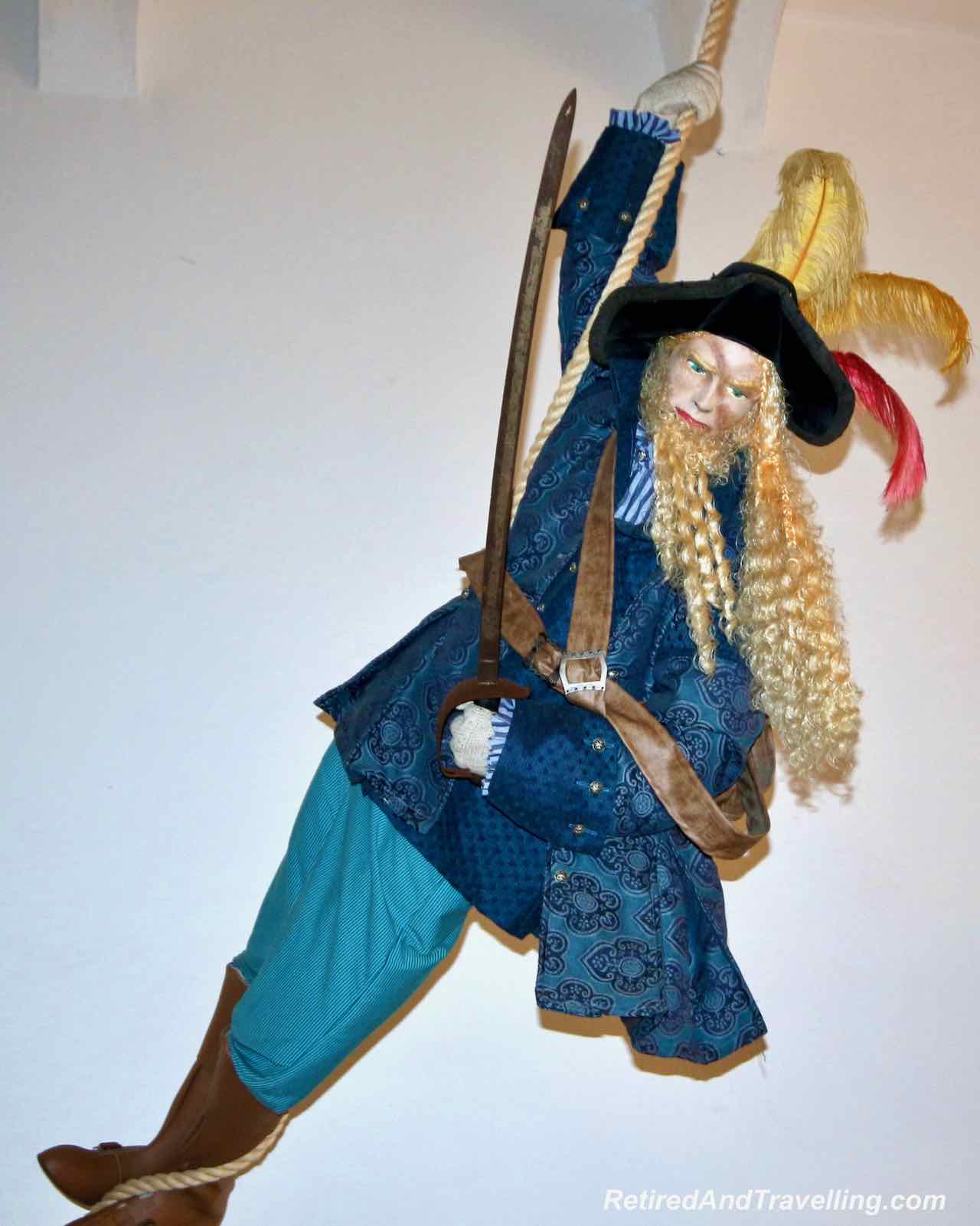 In the outer courtyard we finally got a chance to sit down and had some cold water. There was a local band and dancers entertained us while we had our first and only rest stop. I was sure they would have got a heartier reaction if we all were not quite so wilted at that point. 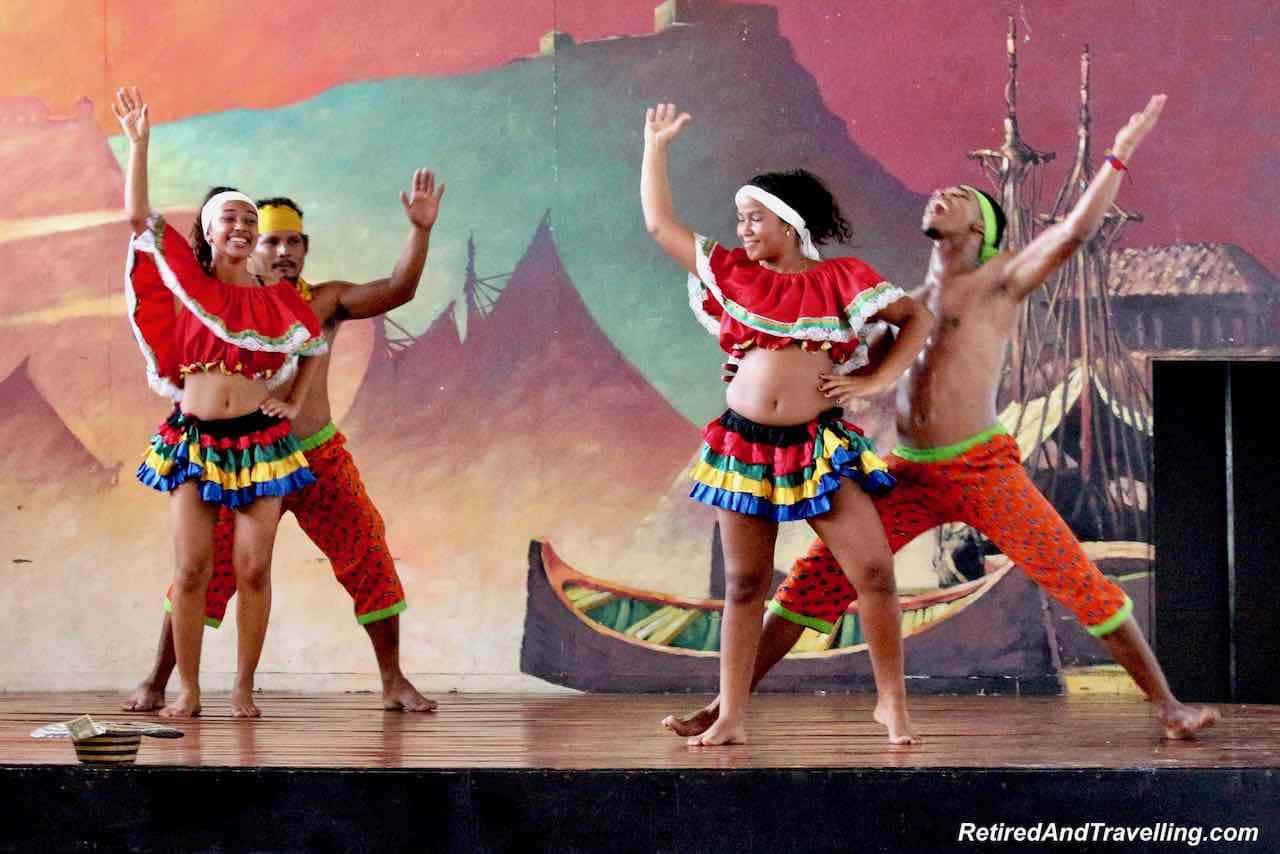 We got a quick 30 minutes to continue running through Cartagena on our own before we were marched back to the bus. The bus took a winding path to get back to the cruise ship.  So we got to see glimpses of the colours of Cartagena as they rushed past.  It was quite a whirlwind tour with barely enough of a taste.  Perhaps Maria wanted us to leave really wanting more?

A Surprise In The Cruise Port When Finished Running Through Cartagena

After a quick lunch on the ship, we took a small bus to the cruise terminal and were surprised to find a small park. The pink flamingos were plentiful within an enclosed area.  But the peacocks walked more freely around the park and the shop area.  Many times they found a perfect spot to pose for the tourists.

We spent about 15 minutes trying to get a good view of the toucan hiding in the tree.  But while he regularly managed to drop leaves on the flamingos, he did this while keeping himself hidden behind the leaves. Unfortunately the aviary was not open so we could not get a closer look at the birds. 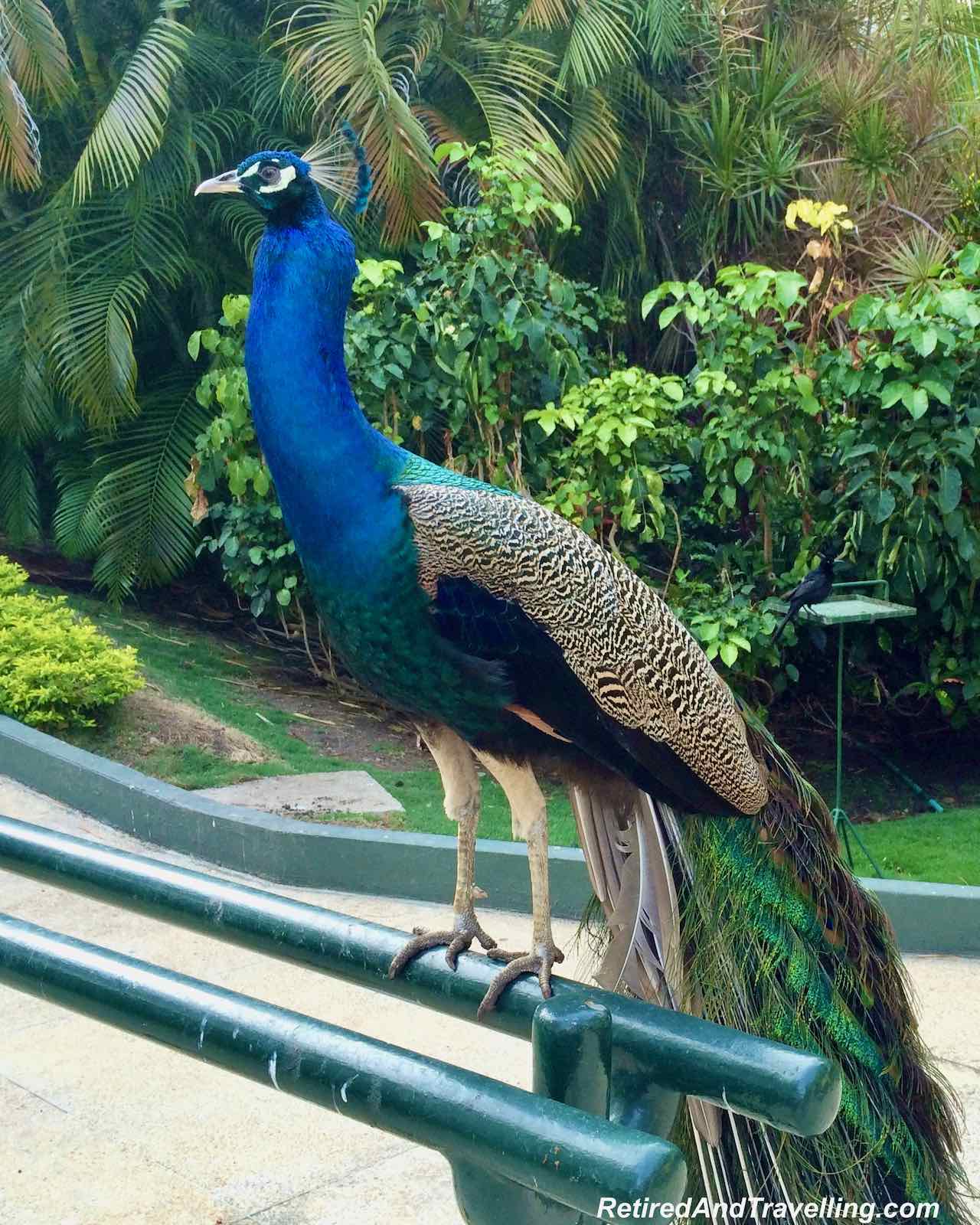 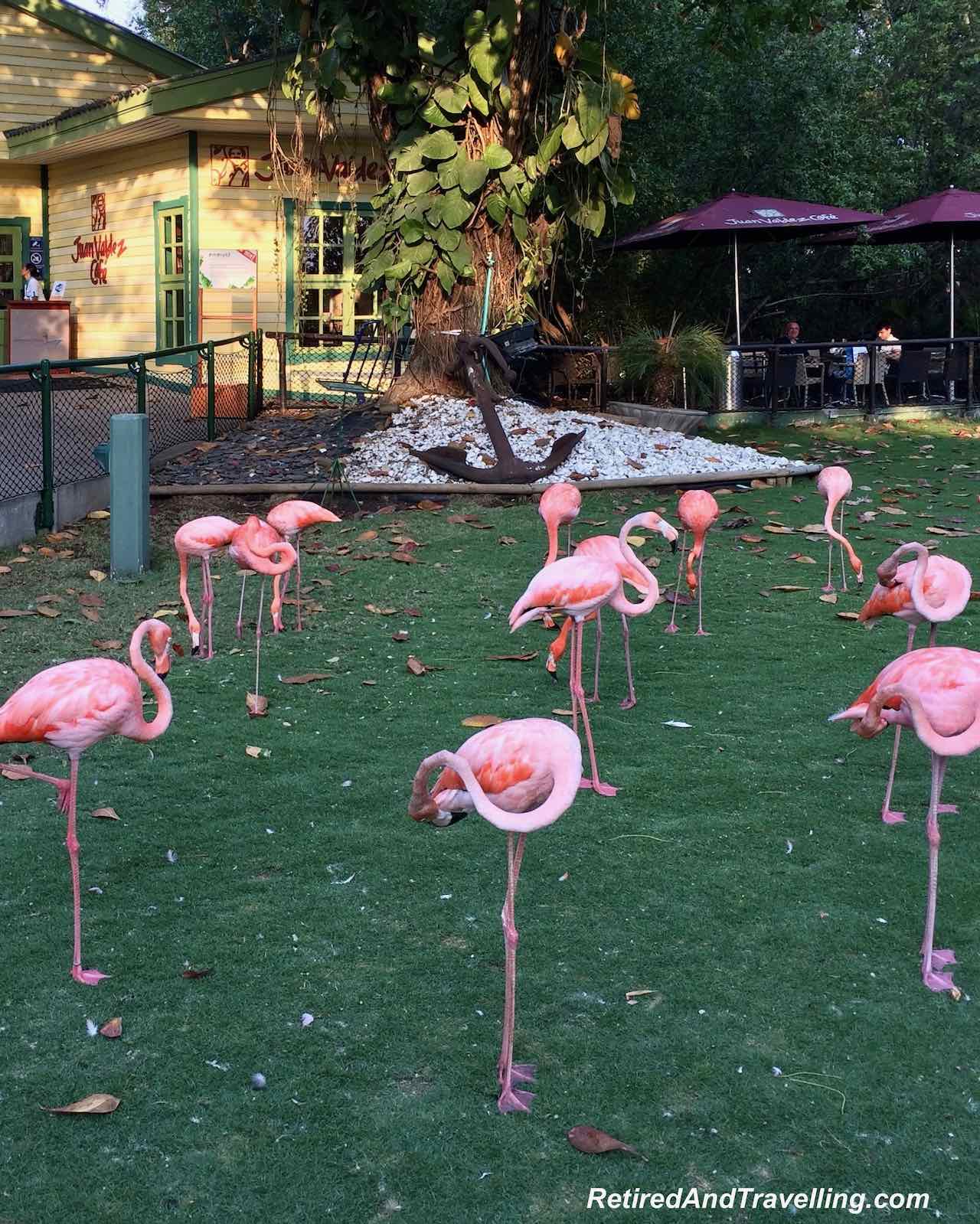 One day in Cartagena was not enough to get more than a taste test. When we met the Emerald expert on board the ship later that day he suggested that we should return for 7 – 10 days. Cartagena was a good base to explore more of Columbia. That would now go on “the list”.

What would you recommend we add to a Columbia itinerary?  What did we miss when running through Cartagena? 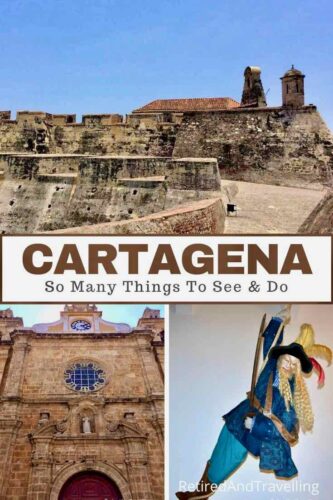 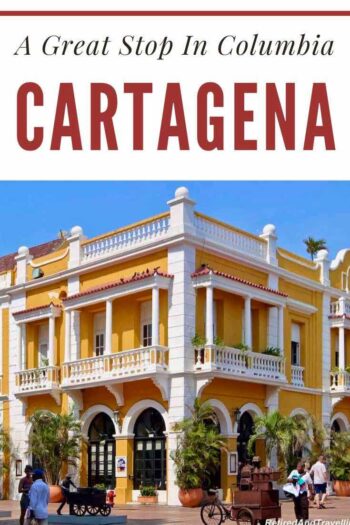 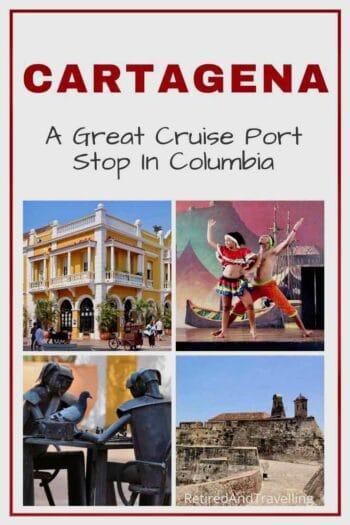