We were excited that the next stop on our 26 day cruise with Oceania Cruises was to be Panama. Costa Rica and Guatemala provided us with interesting insights into Central America.  Our 6 hour tour took us along the Panama Canal Atlantic to Pacific and back again! We went one way by train along the side of the Panama Canal and returned by bus with a stop at the Gatun Locks. 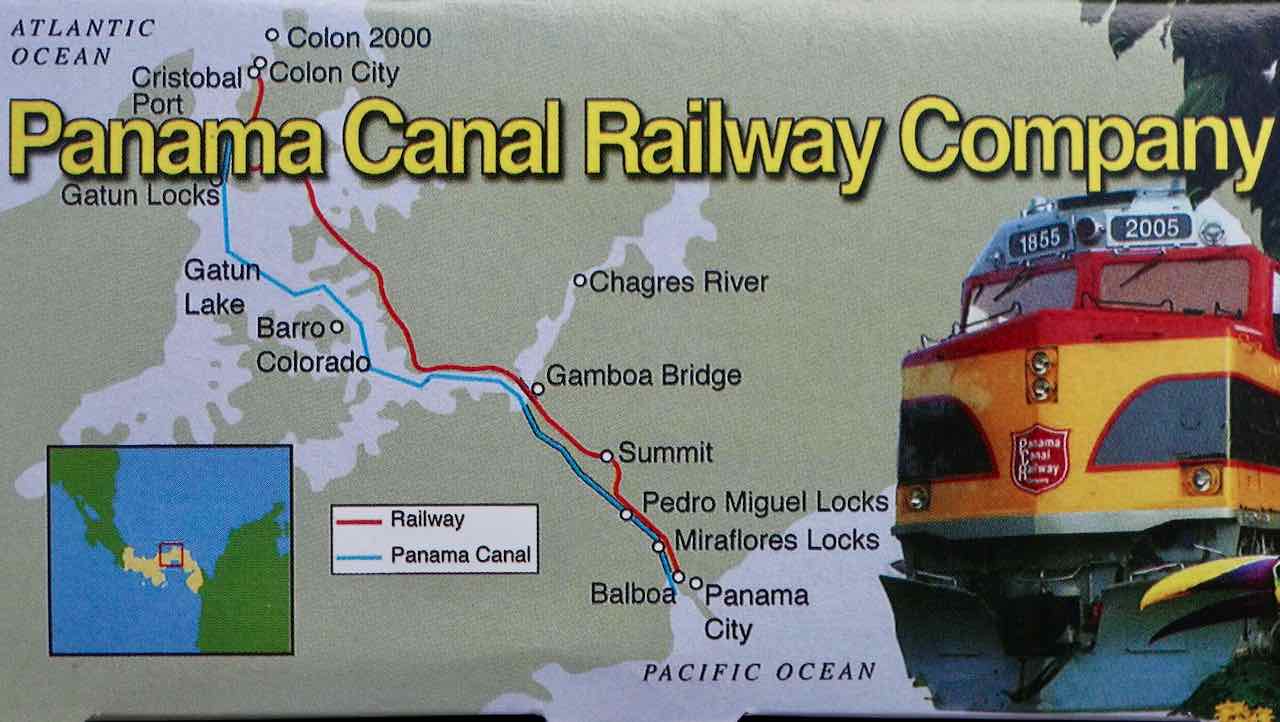 We were up early the morning we arrived in Colon, Panama.  The line up of ships just floating in the bay waiting to enter the Panama Canal was amazing. 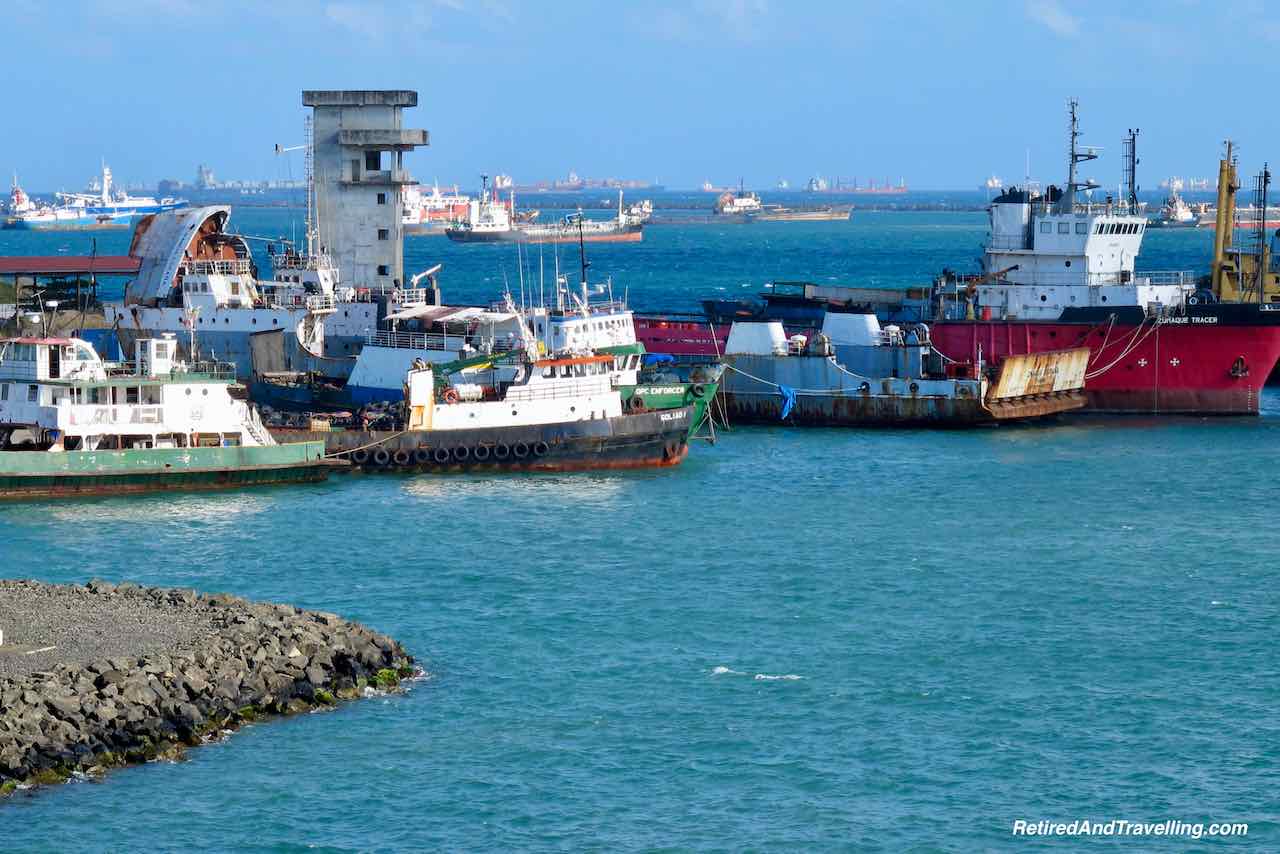 We were interested to learn that the Panama Canal pilots take over for the ship captains to go through the canal.  This is the only place where the ship captain gives up control.

About 36-42 ships per day currently go through the Panama Canal Atlantic to Pacific or back. A major expansion was planned to add capacity but would also allow much bigger ships to transit. We heard that the Chinese were currently looking to build a competing canal in Nicaragua. Since a large percentage of current canal traffic is Chinese, it will be interesting to see what this will do to Panama Canal traffic and prices.

We learned how lucky we were when we got Arthur as our tour guide. He proved to be an entertaining font of knowledge.  He took advantage of the lack of traffic on this Easter Sunday and added more spots to our trip through the day.

It was a quick bus trip to the train. We opted for the more expensive train tour with the dome car that let you sit high up with windows all around. 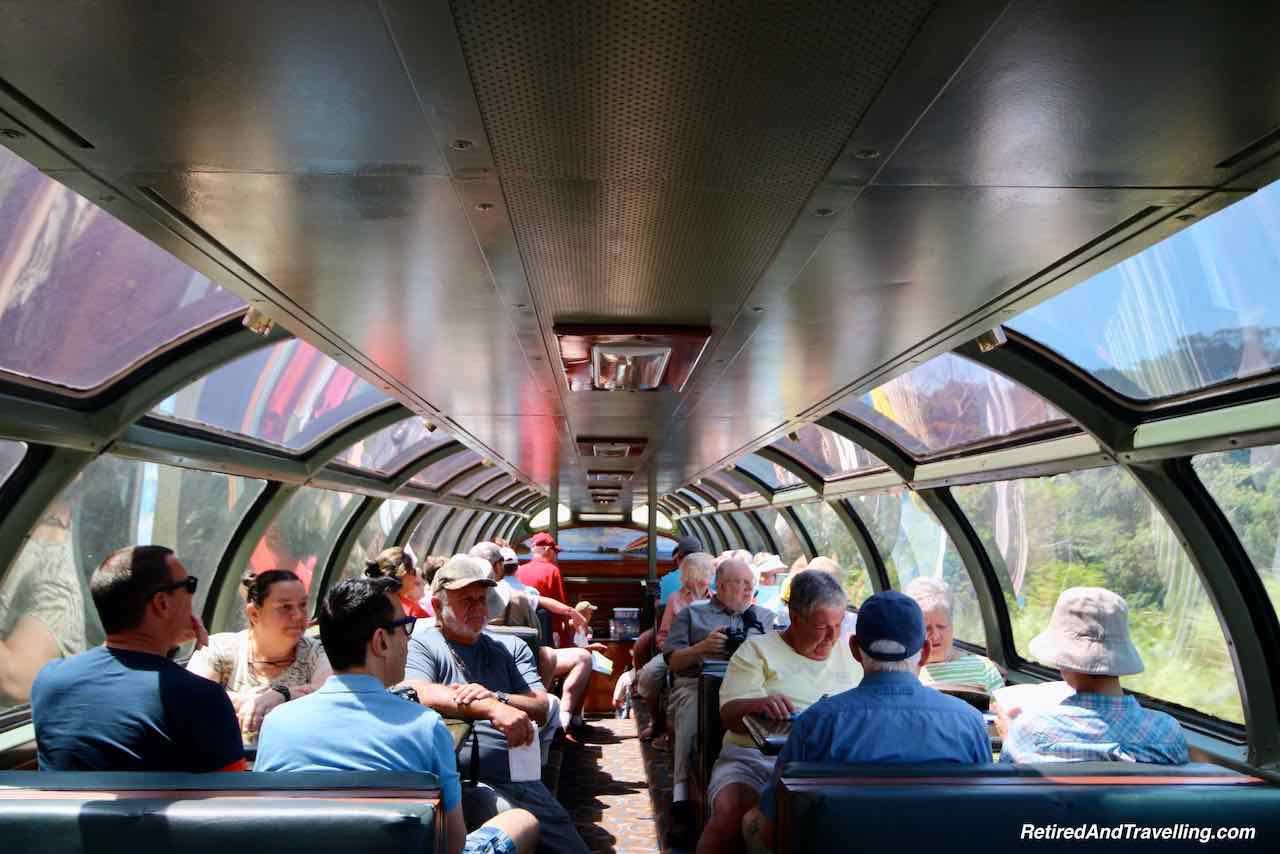 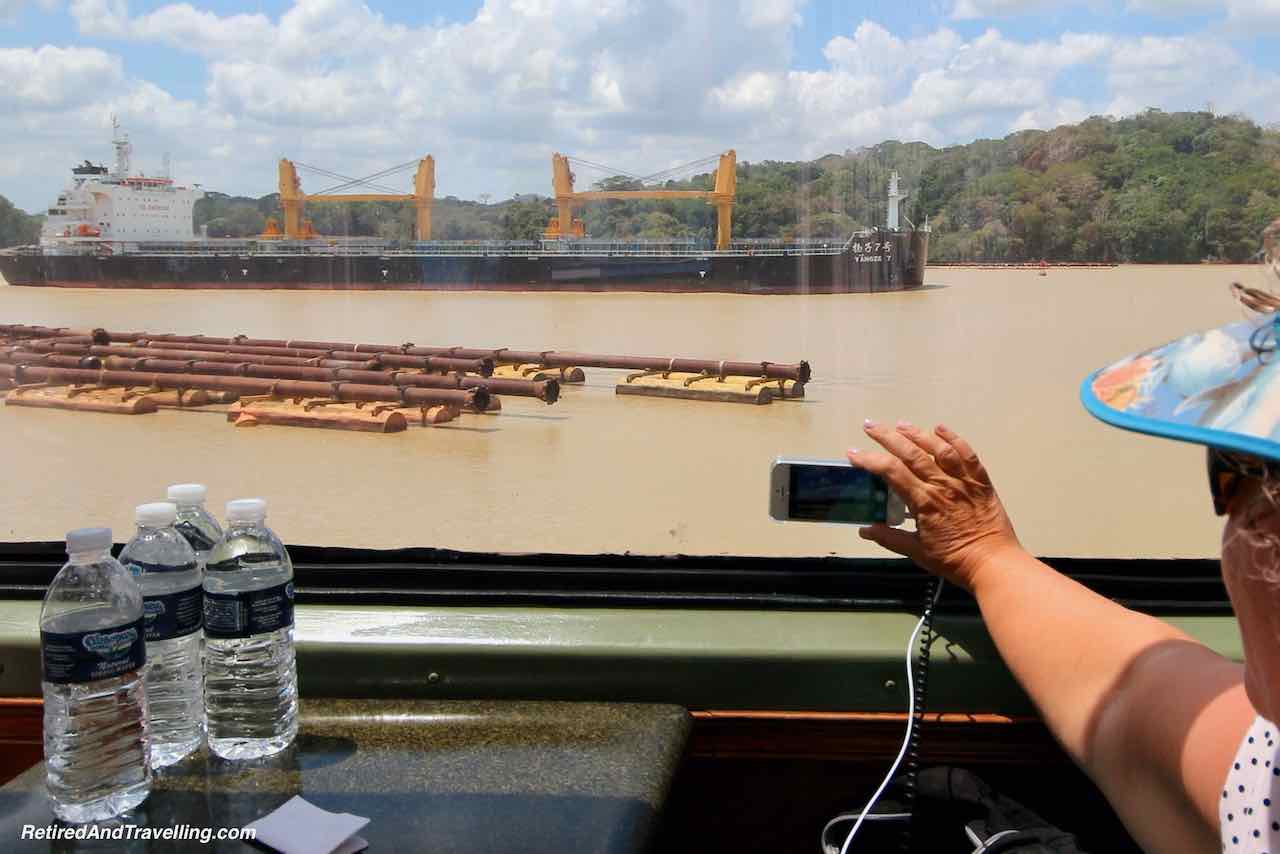 We snagged a seat on the canal side and cleaned the window inside the train.  This let us take pictures from our seats as we passed along the Panama Canal Atlantic to Pacific. We quickly learned that there was also an outside platform at the end of the car when we wanted pictures with no windows.

The train tracks took us by Lake Gatun. This was the largest man made lake, created as part of the lake and lock design for the canal. Much of what we saw as we transited through the lake to the locks were commercial freighters.  But we occasionally saw other pleasure craft. 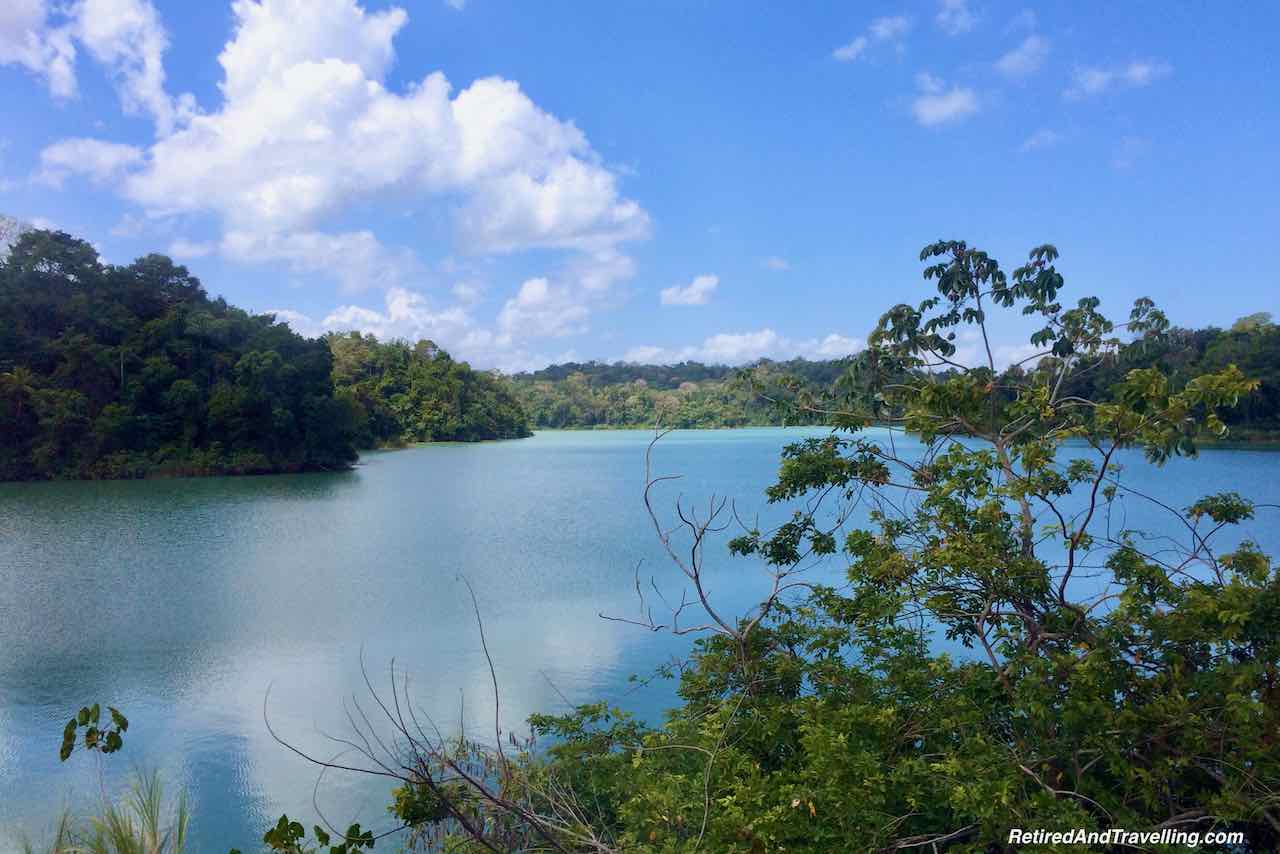 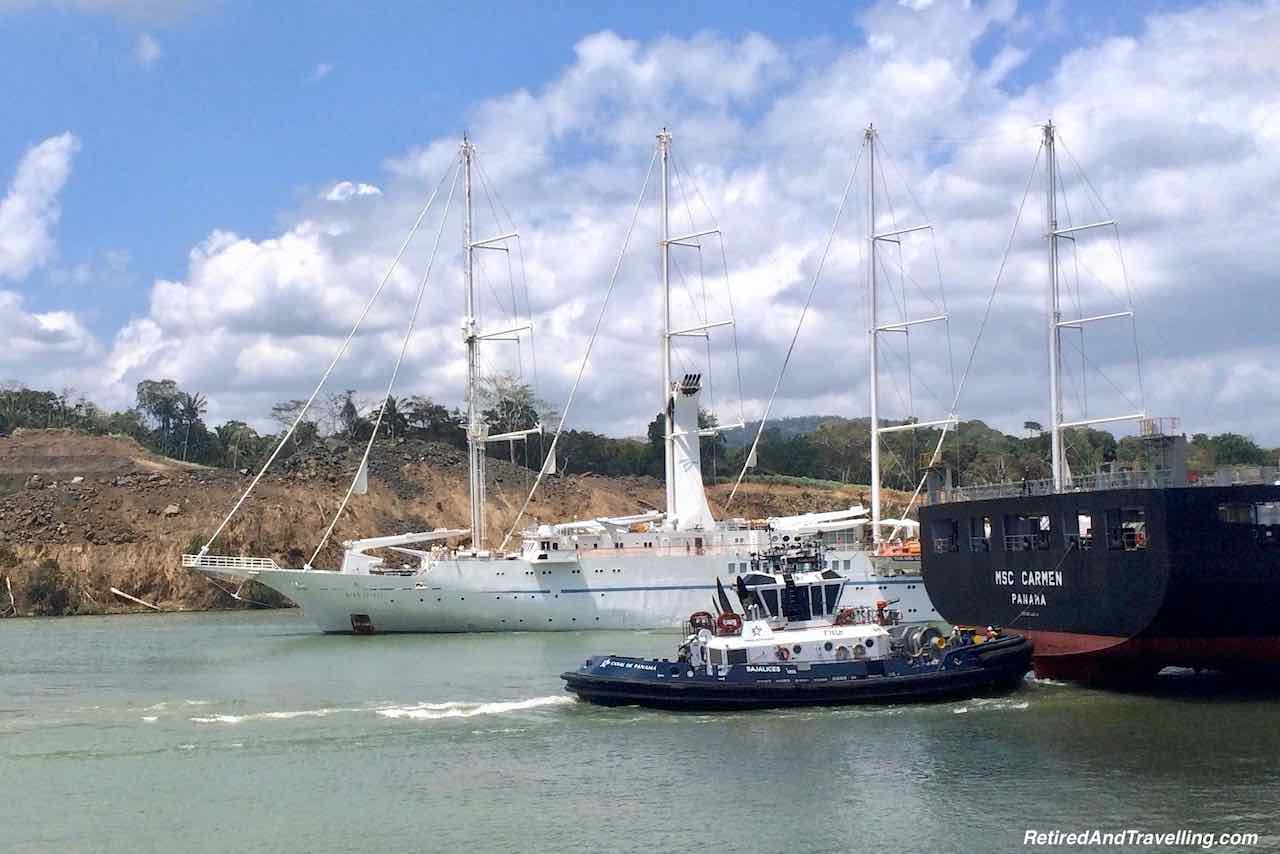 In many parts, the lake water was very brown due to silt returning to the lake and canal whenever it rained.  This was due to the high number of trees that were cut down for the new canal.  Dredging was done on a regular basis. 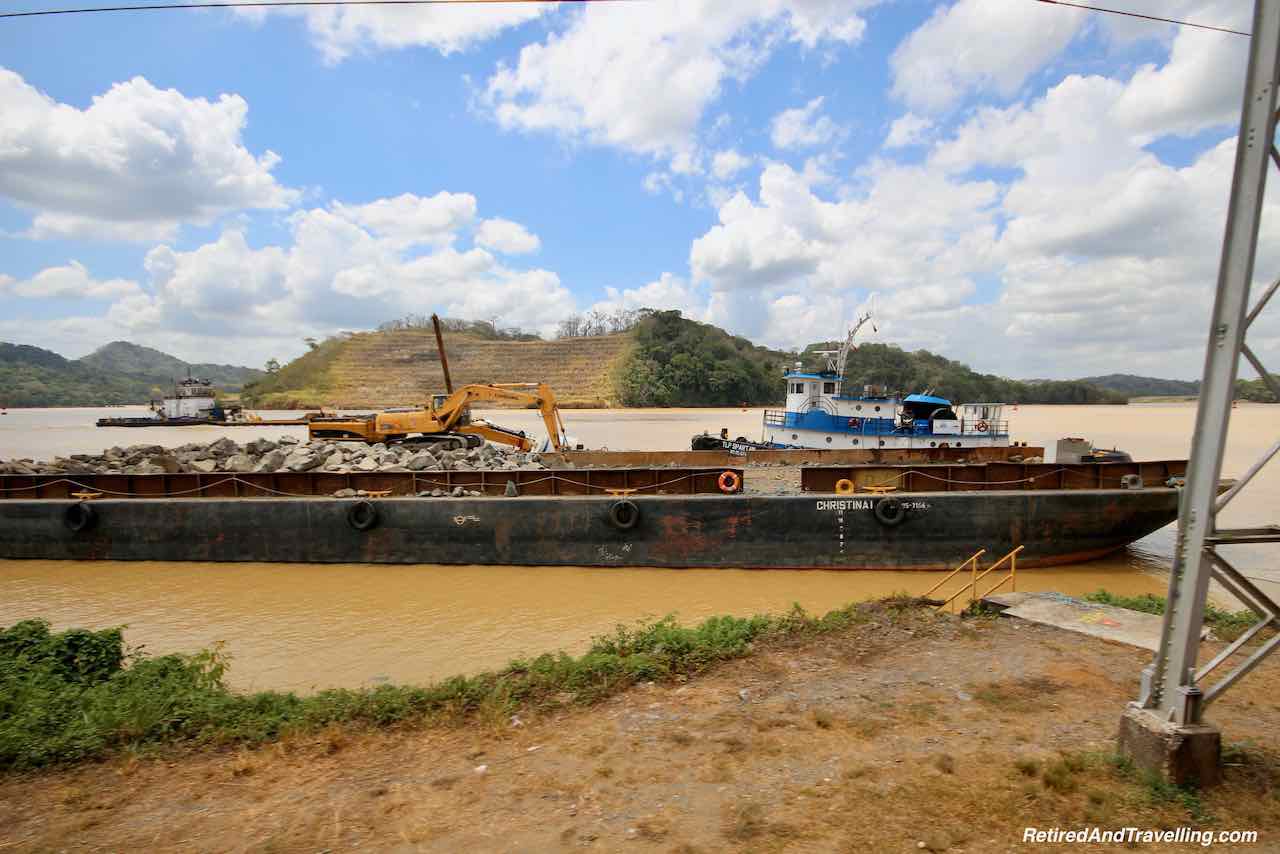 From the train in a number of spots, we saw the construction on the new canal.  Terracing was being done and the large equipment excavated. Arthur ensured that the bus detoured so we saw the large channels being built at both ends. We wondered if it will really be ready by next year. 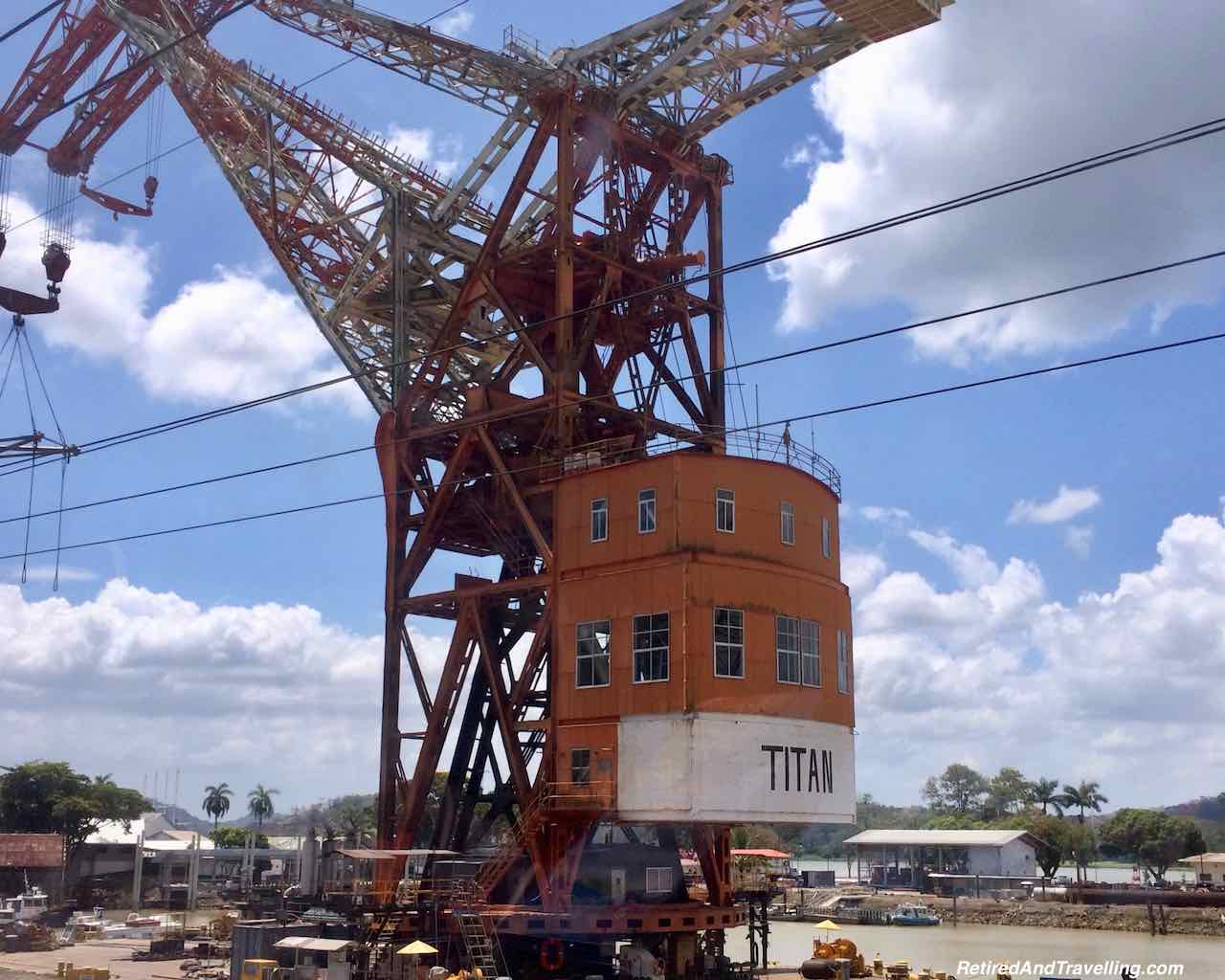 When the train reached the end terminus after travelling the Panama Canal Atlantic to Pacific we were met again by our bus. We left the train station and headed towards Panama City.

This city looked bigger, more modern and much more colourful than we expected after we landed at the poorer port on the Caribbean side. We also saw the older part of Panama City modelled after Cartagena .  Columbia originally included Panama. 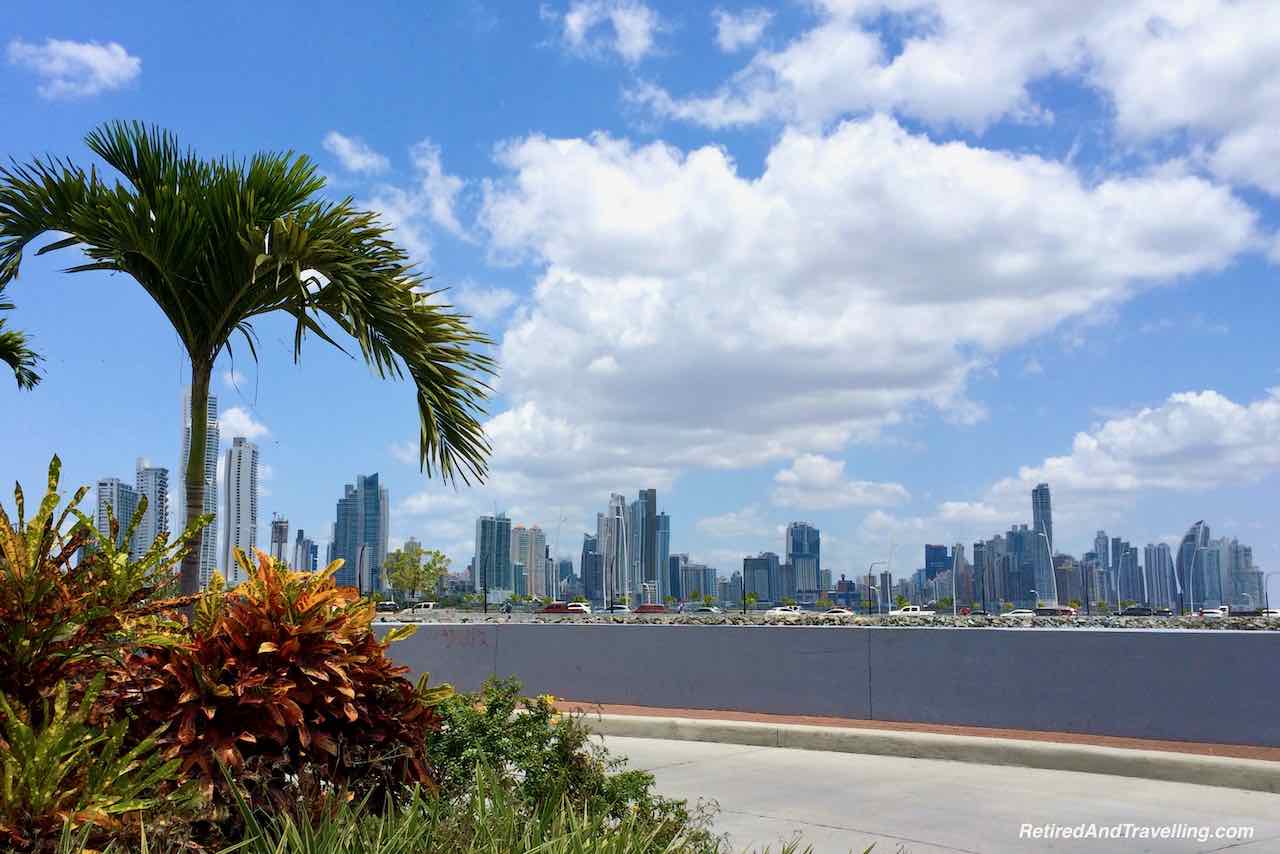 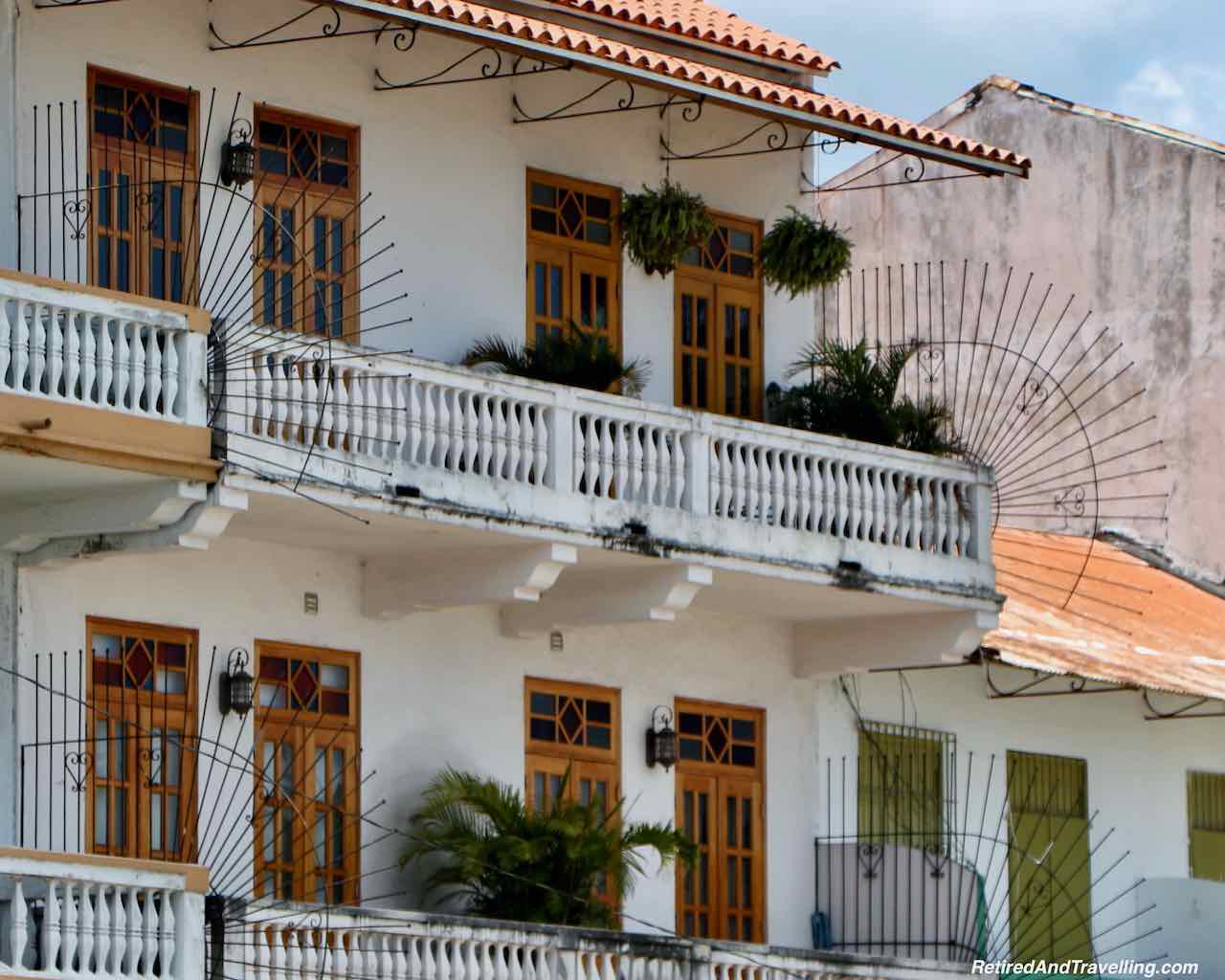 The traffic was light so it allowed us to transit out along the isthmus and we looked back at Panama City. As we saw as we approached the Colon harbour that morning, there was a long line of ships waiting to enter the Panama Canal

The huge yacht club looked back at Panama City and demonstrated the growth of the rich class. But when we drove back through the outer edges of the city we saw the disparity on the other side of the tracks where the poor sold their houses for continued development. 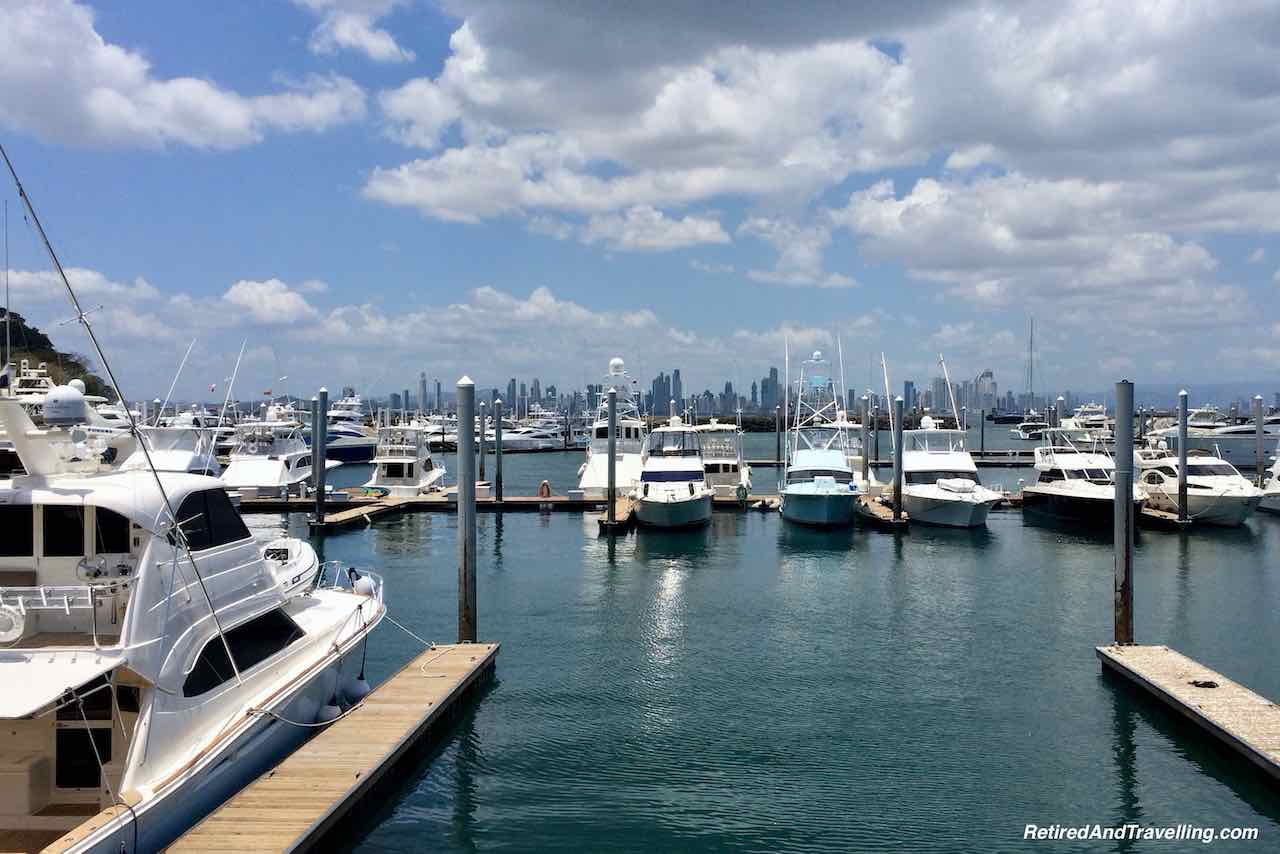 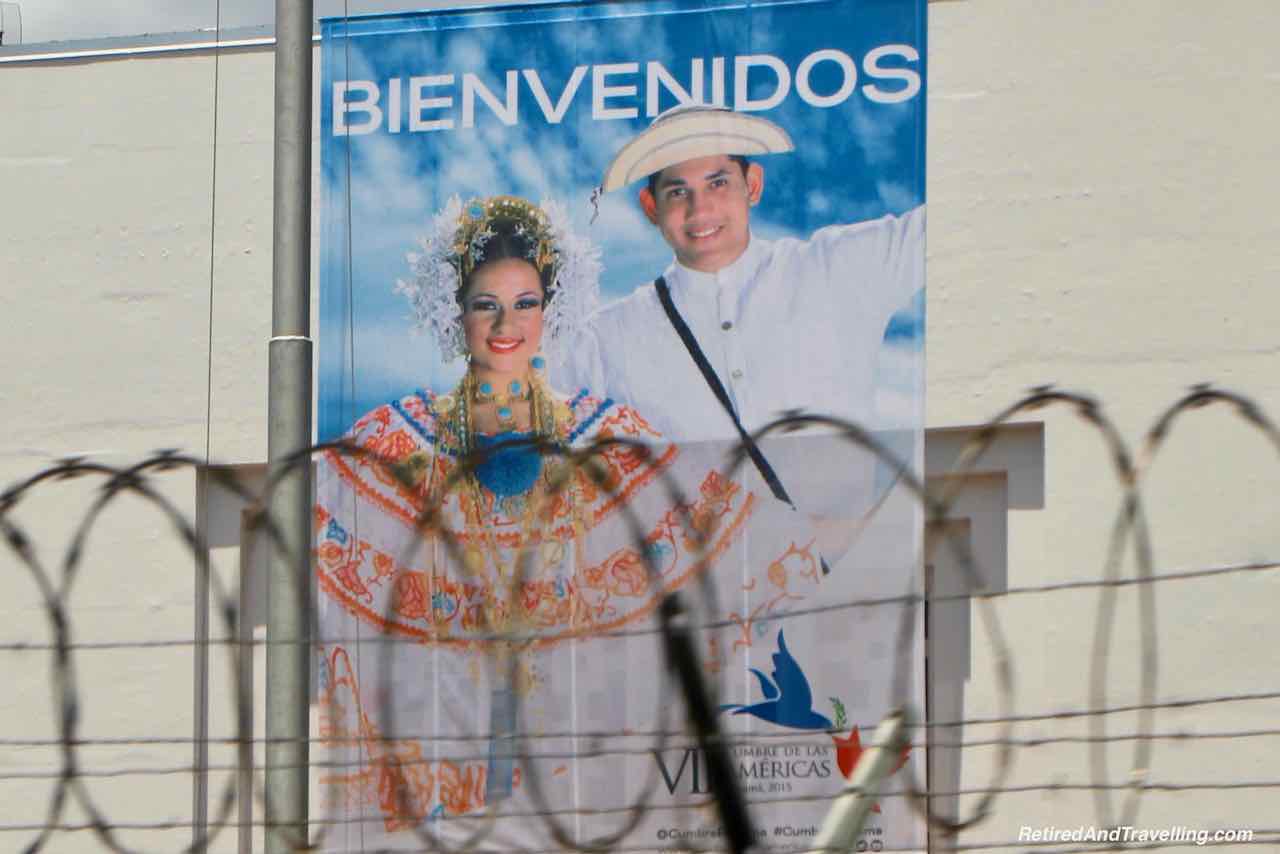 We were intrigued by the vast amount of street art decorating the city in bright colours! 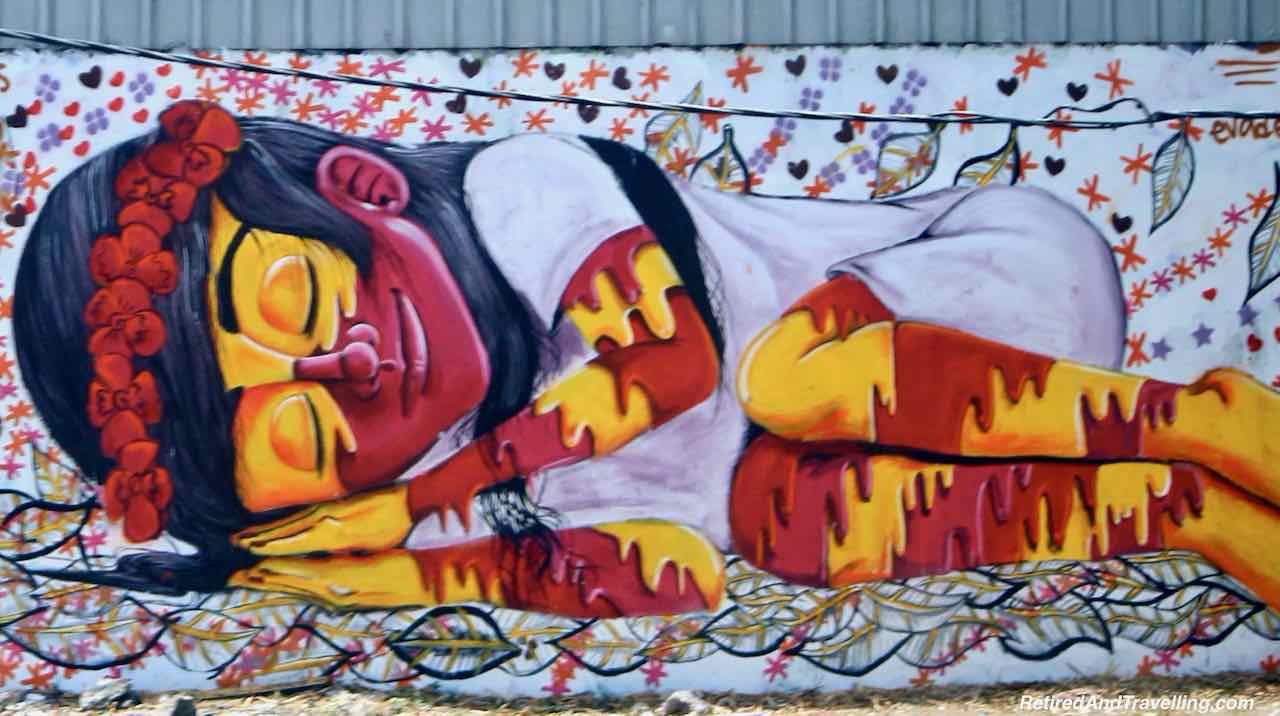 Gatun Locks on the Panama Canal

Heading back, the bus driver took us on the bridge over the water.  This bridge essentially joined the two halves of the country split by the canal. We saw all the way back to Panama City.  And saw the work being done on this end of the new canal.

After a u-turn we headed back on the highway to the Caribbean side. When we reached the other side, we got a similar glimpse of the work being done at the other end of the new canal. 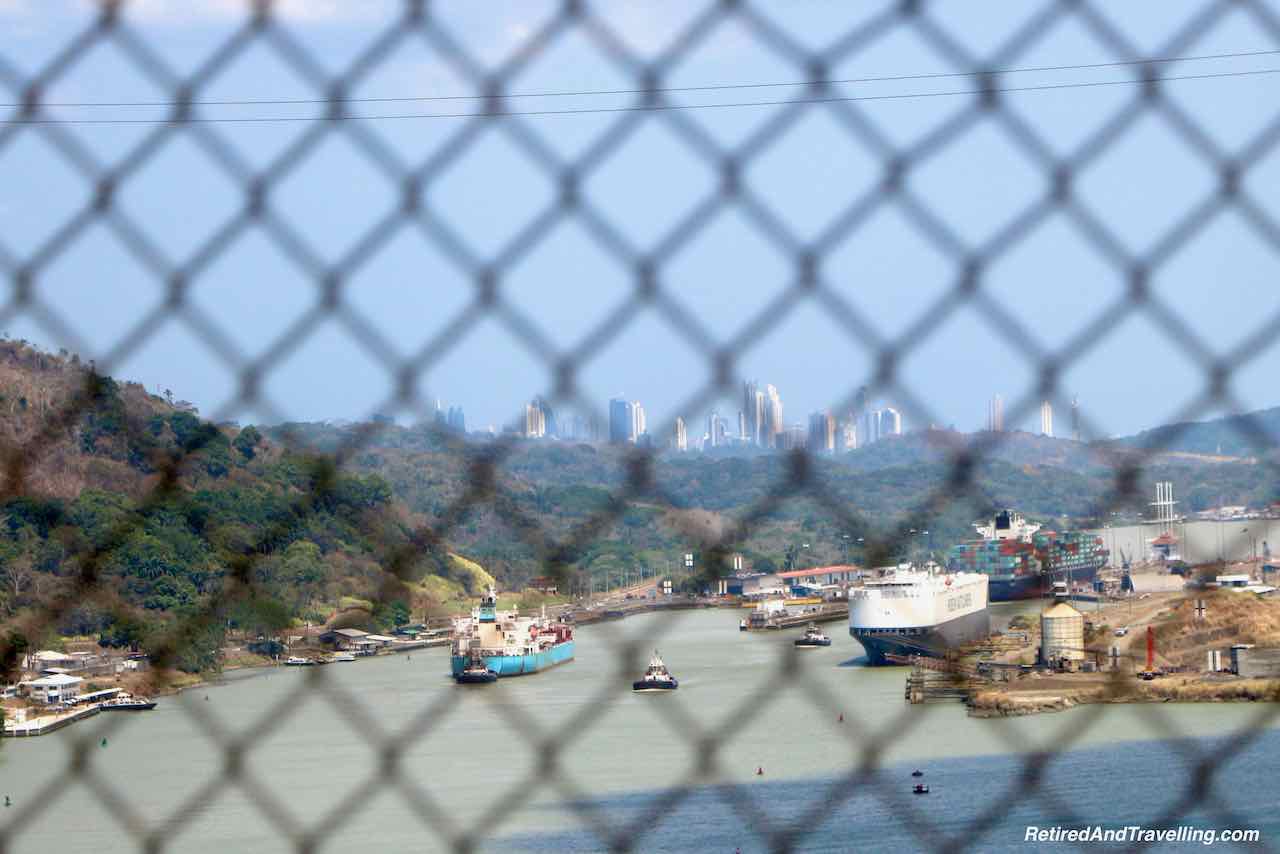 When we arrived at Gatun Locks, we were lucky to find four ships in the locks. After we climbed up to the upper observation deck, we saw a huge freighter leaving.  And a massive RoRo (roll-on roll-off) car carrier was moved in the lock right in front of us. 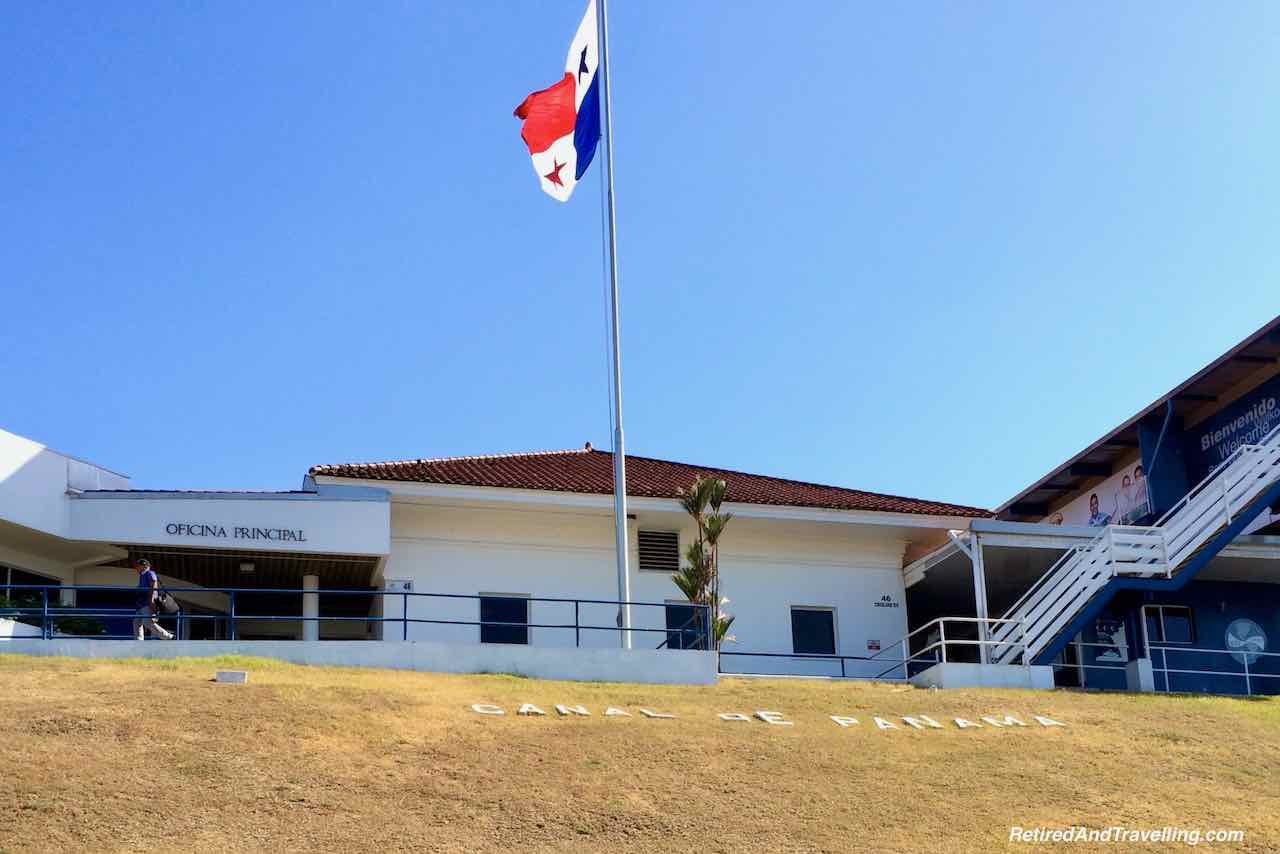 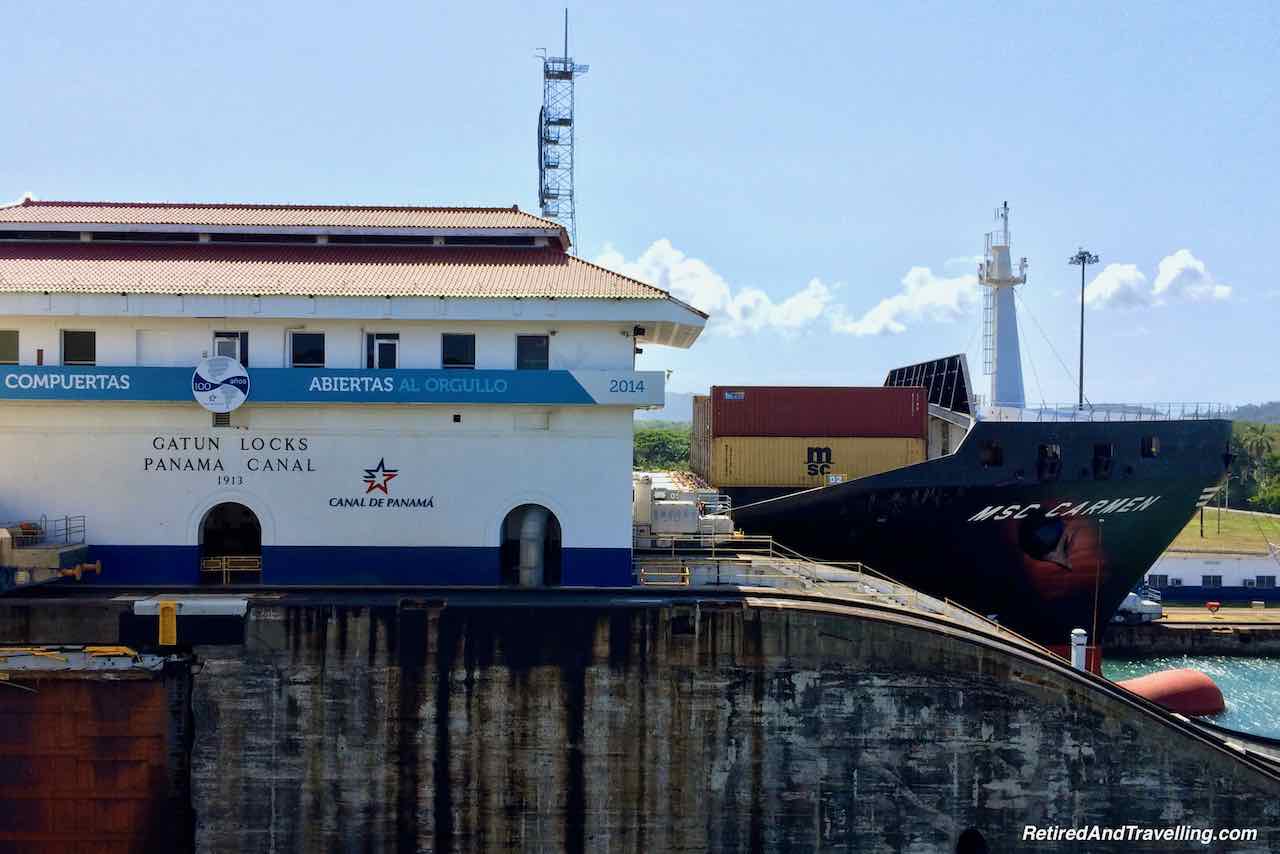 The railway mules pulled the ship through the channel. The double lock doors then closed behind it and the section emptied before the large ship moved to the next section.  We saw other locks in operation before.  But never experienced the massive size of the ships that passed so close before us this day. 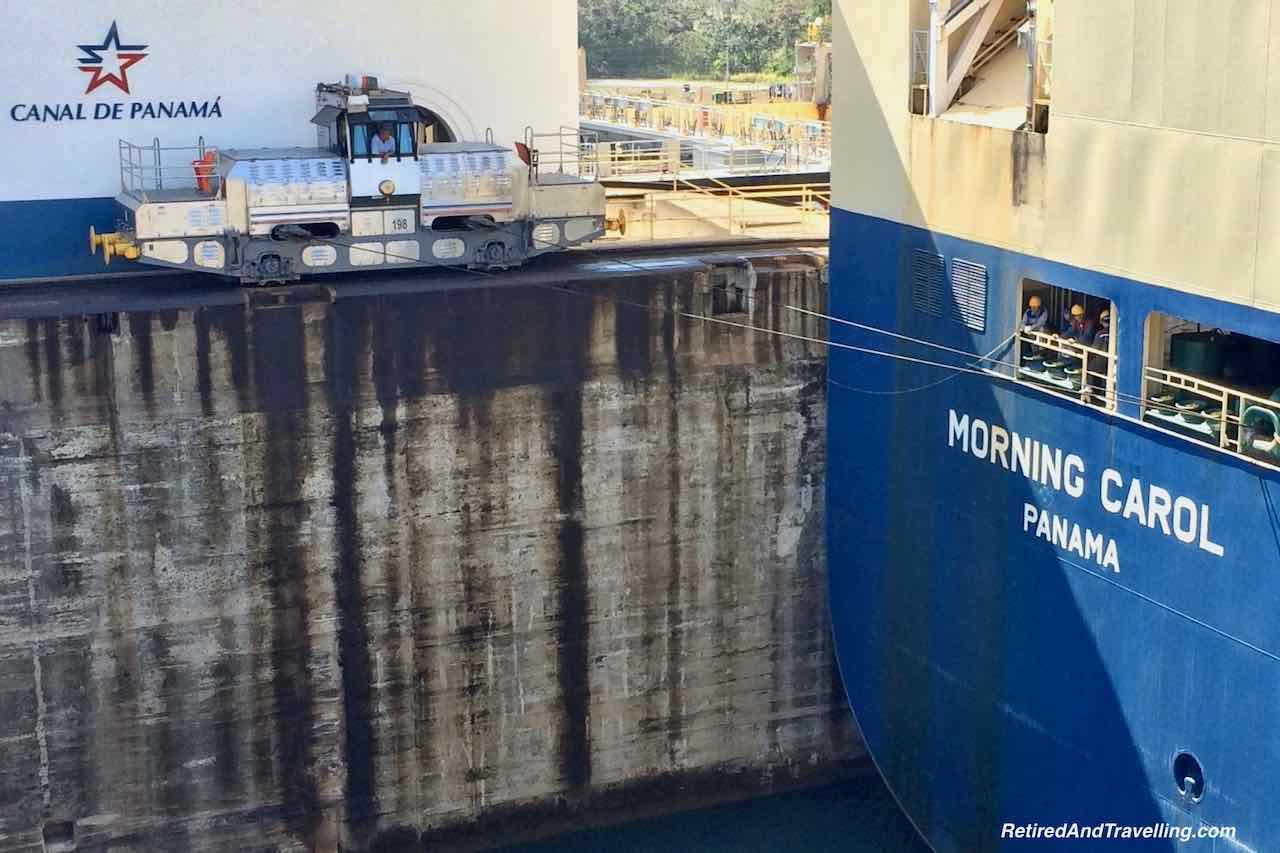 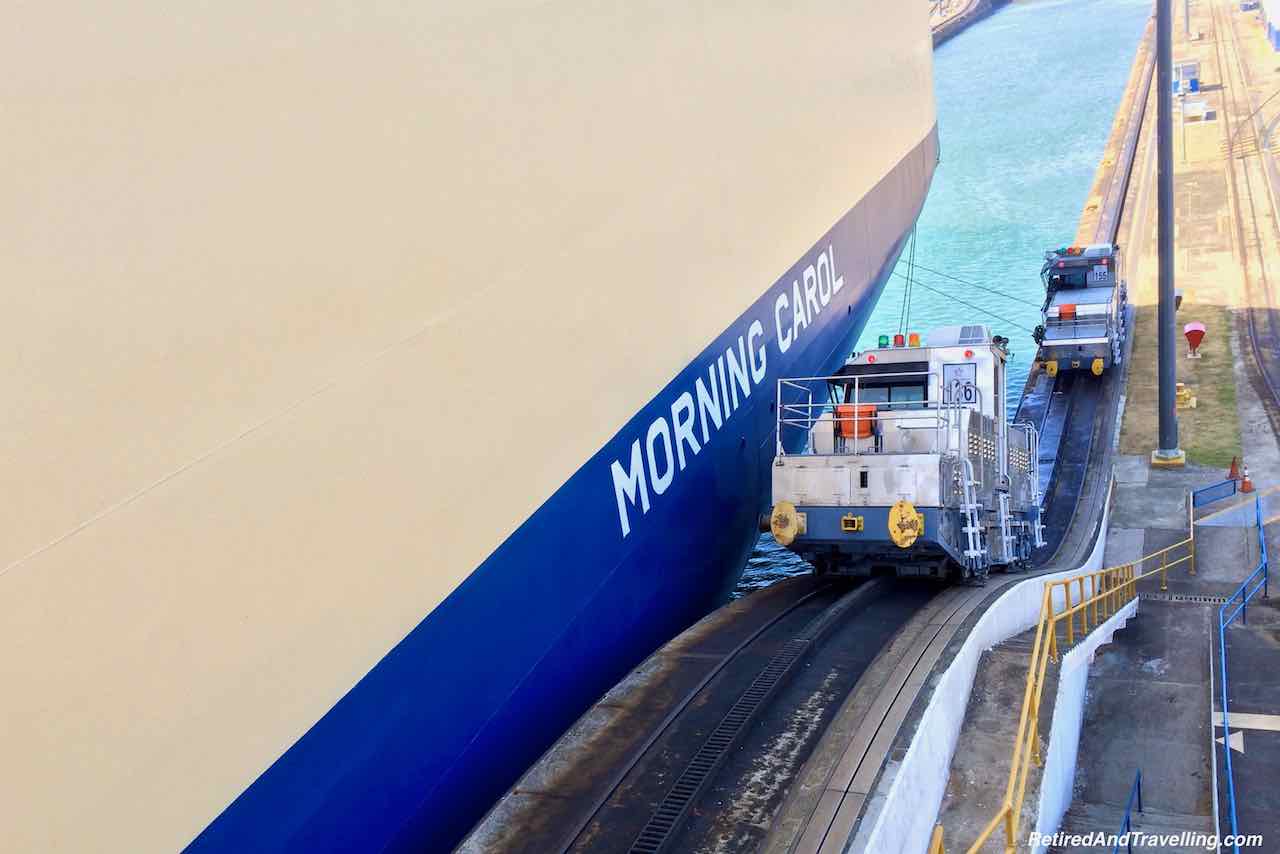 It was a short ride back to the ship. We passed the massive tax free zone.  But had no time to shop due to our extra stops on this tour. Arthur was great and ensured that we retained his gems of information about the Panama Canal Atlantic to Pacific with regular repetition and quizzes. We took his card for private tours if we returned to Panama in the future.

We headed to Cartagena for the next adventure on this cruise of the west side of the Caribbean!

More About Building The Panama Canal

The 51 mile Panama Canal went through this tiny S-shaped country and allowed you to see the sun rise over the Atlantic Ocean and then set on the Pacific Ocean. It was referred to as “the kiss of the oceans”. The transit through the canal takes 8-10 hours and saved 8,000 miles and 10 days for ships.

The building of this greatest man-made wonder suffered starts and stops. The original attempt was made by the French. De Lesseps envisioned another sea level canal like he had built for the Suez Canal.  But Panama was nothing like the Suez area. Dense rainforest, deep swamps, unstable hillsides and death by disease (yellow fever) plagued the early attempts. In 1889, France gave up after a $350 million disaster and having excavated 30 million cubic yards (but only 1/10 or what would be required).

The USA under Roosevelt became interested in the Panama Canal.  It was driven by the need to be able to reposition battle ships from the west coast to the east coast much quicker. They considered putting a canal in Nicaragua even with the high number of volcanoes. The decision to keep it as Panama was finally made when a major volcano erupted in 1902.

The biggest challenge was that Panama was then owned by Columbia so the US needed to instigate and support a revolution to allow Panama to separate. The bloodless coupe ended in 1904.  And the US bought the right to build the canal from the new Panamanian government for $10 million. Work began in 1902 and the canal was opened in 1914. The Panama Canal celebrated its 100th anniversary, having operated year round and around the clock since 1963. 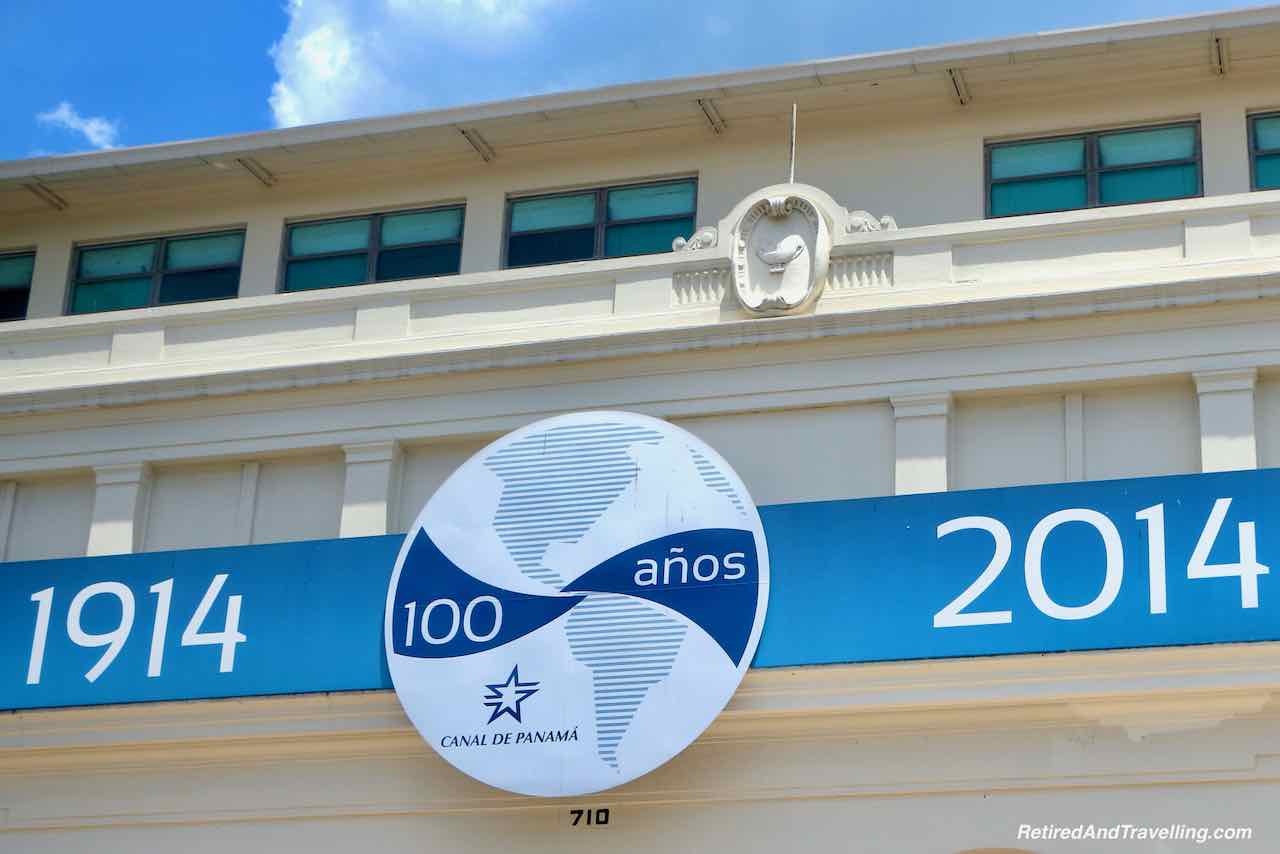 Two issues needed to be resolved before work could begin. The first was the lock design. Ultimately they decided to build a set of locks rather than the sea level canal that de Lessop had begun. The US brought John Stevens in to build the canal due to his extensive experience as a railroad engineer. His plan needed to consider the major challenges involved with moving the amount of earth that would be required for locks, the rugged mountainous stretches and the torrential rains and rising rivers (but no hurricanes in Panama!). He finally decided to use all of this in his “locks and lakes design” where rain and gravity would play a major factor in the lock operations. To this date, they have never had to use a single pump for the lock operations!

The second biggest issue was ensuring a successful ecosystem in which the workers would need to work (including their families). Over 20,000 people ultimately died from disease, Malaria and Yellow Fever.  They were virtually eradicated in 18 months, which allowed work to proceed with much less risk. Much was learned about mosquitos, how disease was transmitted and the timeline for infection.

After 4 years Stevens quit and was replaced by Goethals. The excavated earth was used to build the Gatun lock.  When the Gatun lake was flooded a number of villages were buried under the water. It was said that enough earth was excavated in building the canal to build a Great Wall from New York to San Francisco! On May 20, 1913 the two steam shovels from either coast met.  And the canal was officially opened on August 14, 1914.  It was 6 months early and under-budget by almost $23 Million. No one really noticed this major event because of the war starting.

Have you visited Panama and the Panama Canal Atlantic to Pacific? What should we see when we go back? 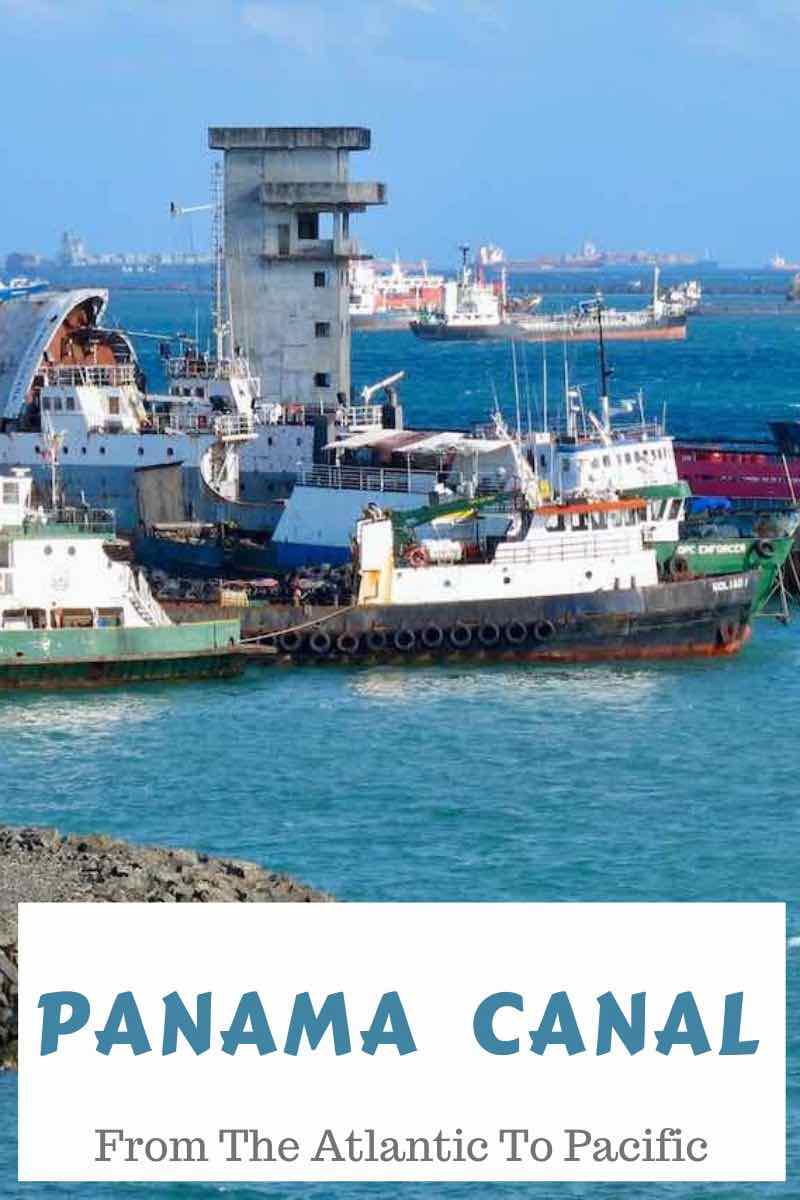 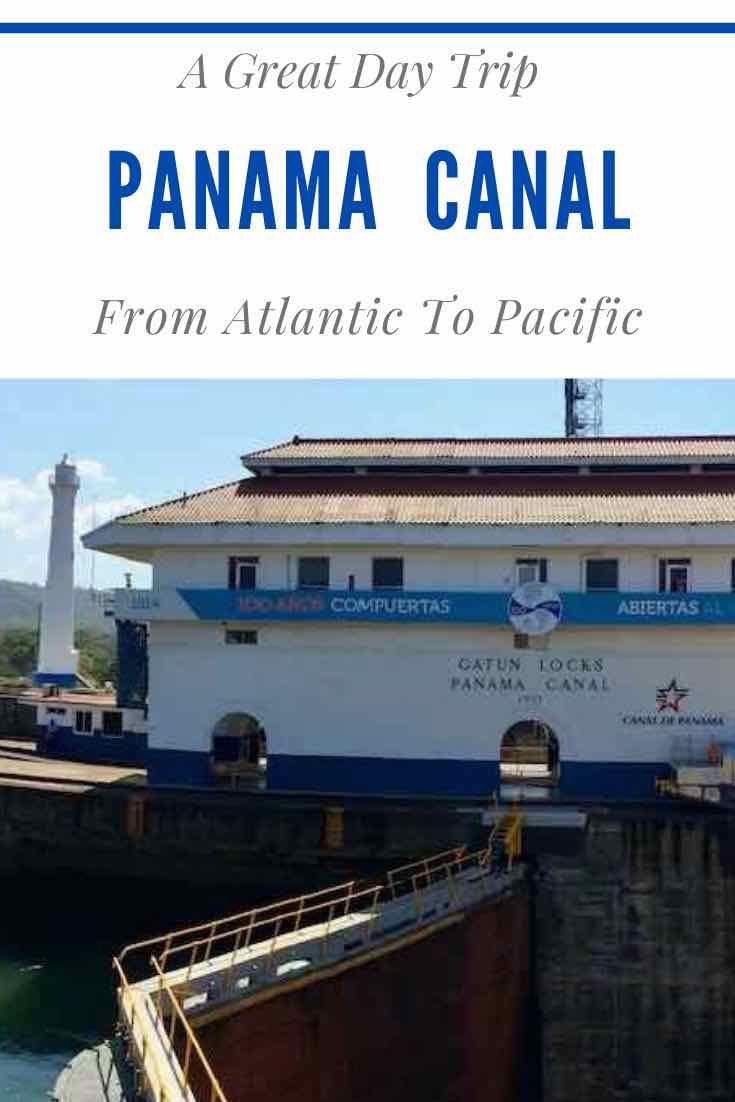 Guatemala Heart Of The Mayan World

Arriving in Santo Tomas, Guatemala Guatemala was our first exposure to Central America on this 26 day cruise with Oceania Cruises.  The captain expertly parallel parked the ship in the small fishing village of Santo Thomas. […]

We would love if you could share this!
23
23
Shares

Returning To Porto It was always great to return to a city you have explored in the past. We visited Porto in the spring and were back for a day stop on our cruise along […]

Lost City of Petra in Jordon

Travelling to Petra We had marvelled at the temples and tombs in Egypt. Touring through Jordon, we headed for the lost city of Petra! This ancient marvel had been on my “list” for a long […]