London Gateway To 10 Weeks In Italy

When heading to Europe for an extended stay, we always pick a gateway city to spend a few day and get over jet lag.  This trip our choice was a London gateway.

Starting our 10 week fall Italy trip, it was a debate whether we would fly Air Canada or BA (although we did briefly contemplate a detour through NYC on a major US carrier). We wanted a good business class experience and we wanted lie flat beds.  Since there seemed to be unrest in much of the world, we decided that AC offered the safest choice (the advantage of having a small military and being known for our peacekeeping missions).  The AC lounge was crowded, not made better by string of delays. We were pleasantly surprised by the good food but found the noisy crowded place not relaxing or productive due to very crappy wifi (even in the business centre). When AC responded to my tweet they suggested talking to a hostess. I guess he didn’t see the business centre full of wired internet cords?

Optimistically, we headed for the gate at the planned boarding time, only to stand like sheep with rest of the priority passengers through 3 delay announcements while the aircraft got re-positioned and readied. Finally boarded we got settled into bus class pod and spent time figuring out the controls on the seat (aided by a picture card that was only a bit helpful). Dinner was ok but service in my side was so slow I got thru a full movie before getting my main dish finished. I watched the Robin Williams movie about dying, kinda poignant given his recent demise. Giving up on desert, I moved my seat to the “zzz” position and with quiet music and a lavender scented eye mask I settled on my side. After about 2.5 hrs, I was woken only by my own snoring. 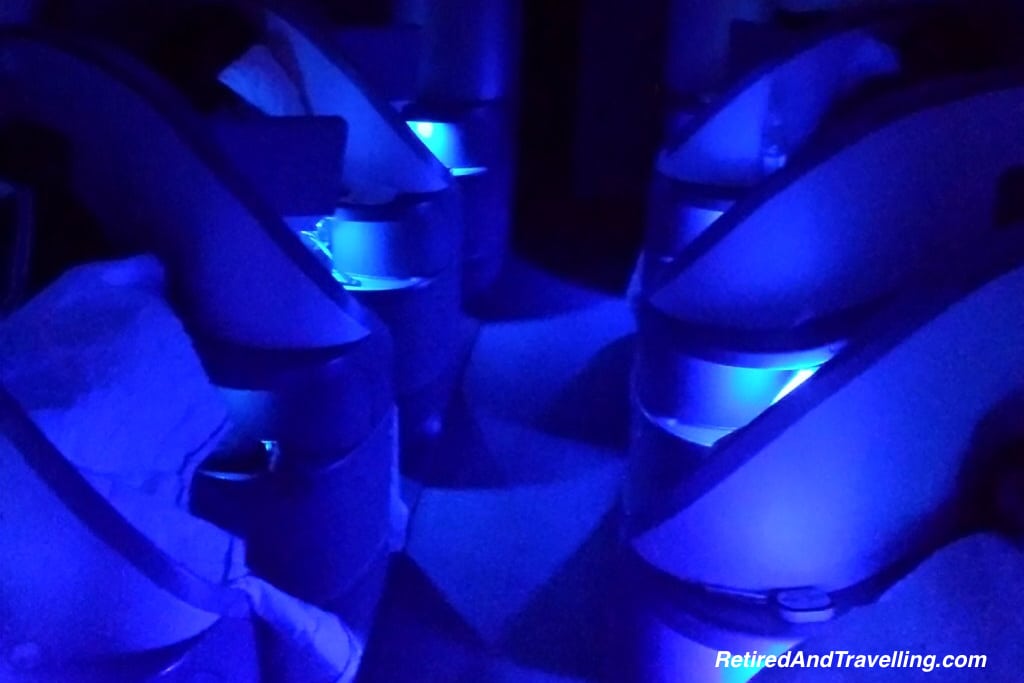 The 6 hr flight passed quickly and we were snacking again before I knew it. It really was about the same flight time as flying back from Vancouver to Toronto – it only felt worse when you knew you were landing having really missed a whole night! One of the biggest benefits of first class is that we were through customs and baggage so quick that we beat our driver to the pickup spot, despite the several kms we walked within the airport.  We were ready to start our London gateway adventure! 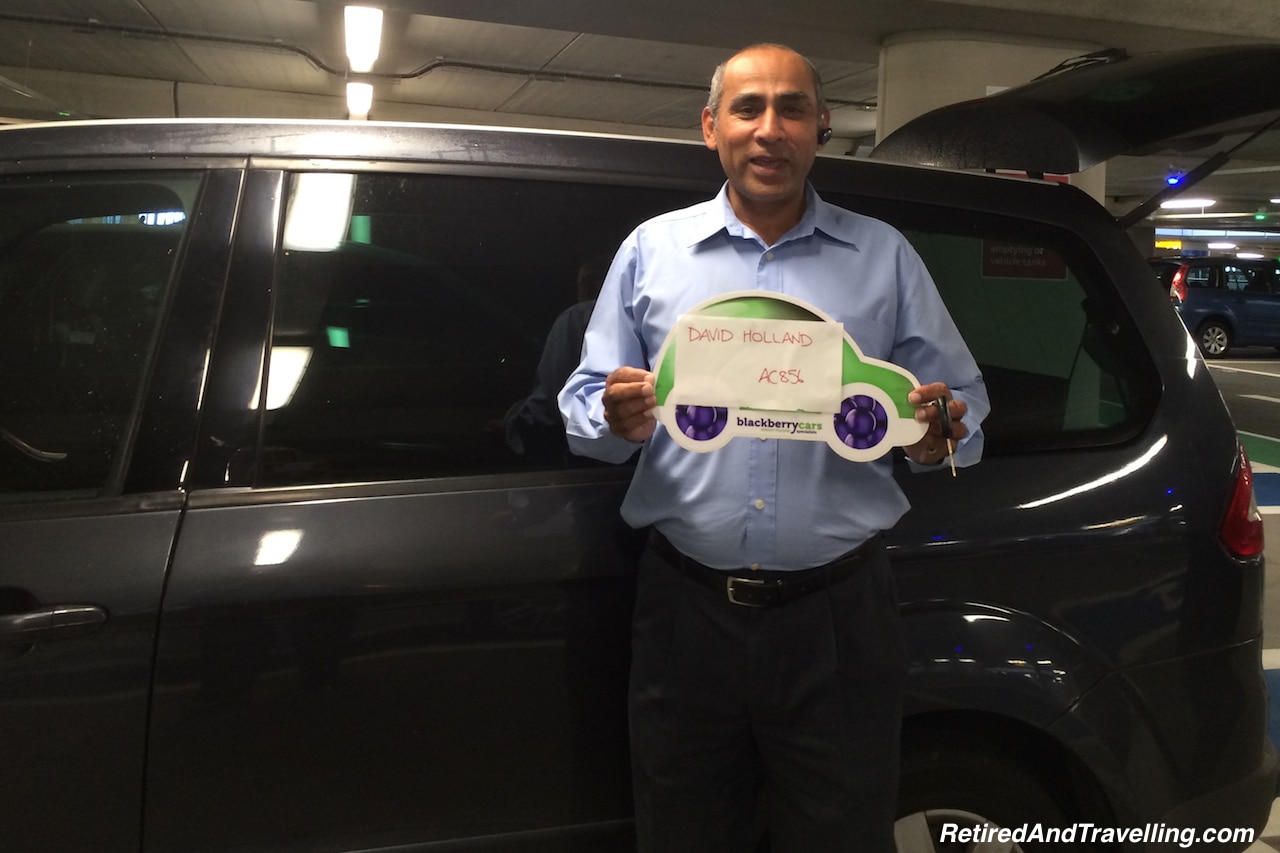 Finding Venice in Our London Gateway

Sunday morning traffic at 7am was sparse, so we arrived quickly at our hotel. It was time to start our 10 week adventure! Our little boutique hotel in the west end (The Colonnade) was busy for the weekend so we would not get to check in early. Taking the recommendations of the staff and our lagging energy, we decided we would stay local in the west end for our first day. We wandered just down the street and easily found Little Venice and the canal system that would take us to Camden Market.  This was a great way to leisurely spend the first day of our London gateway visit! 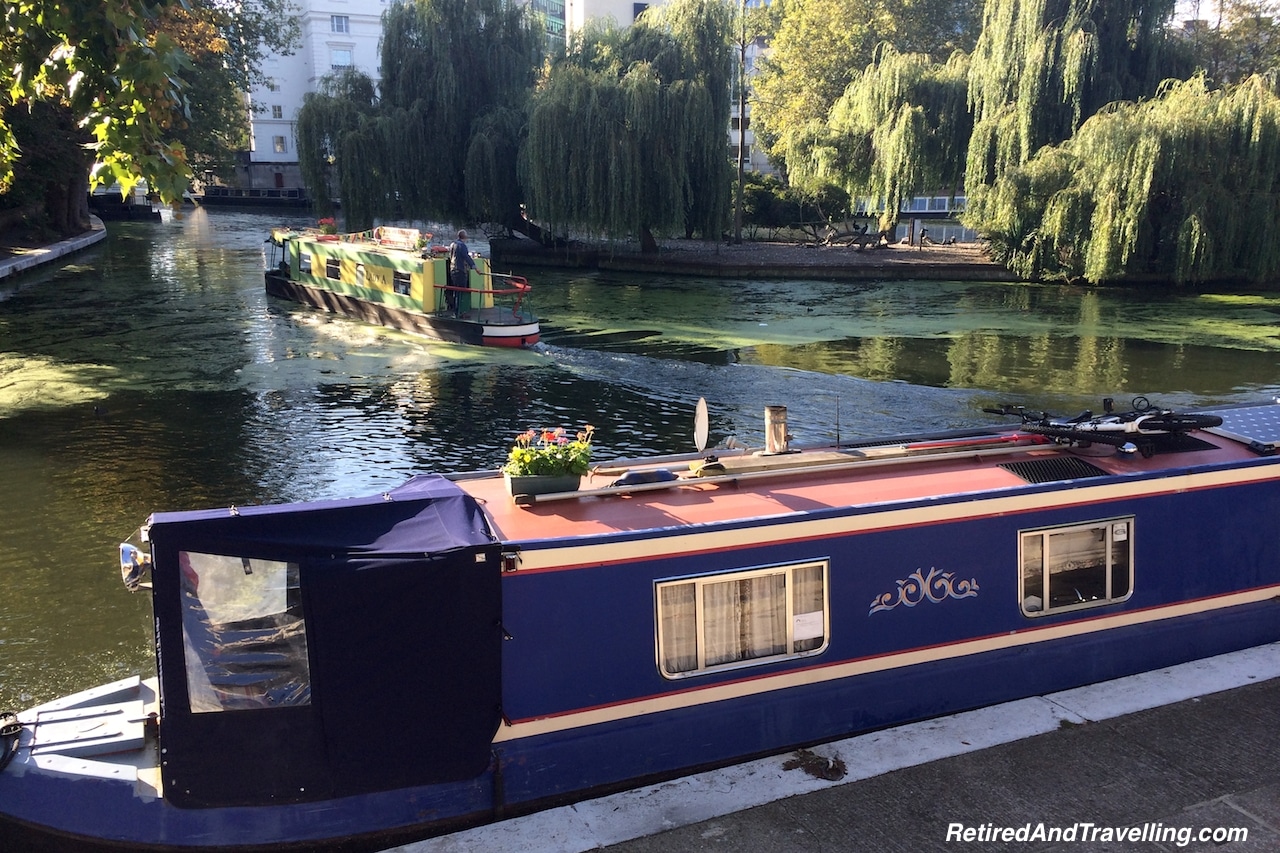 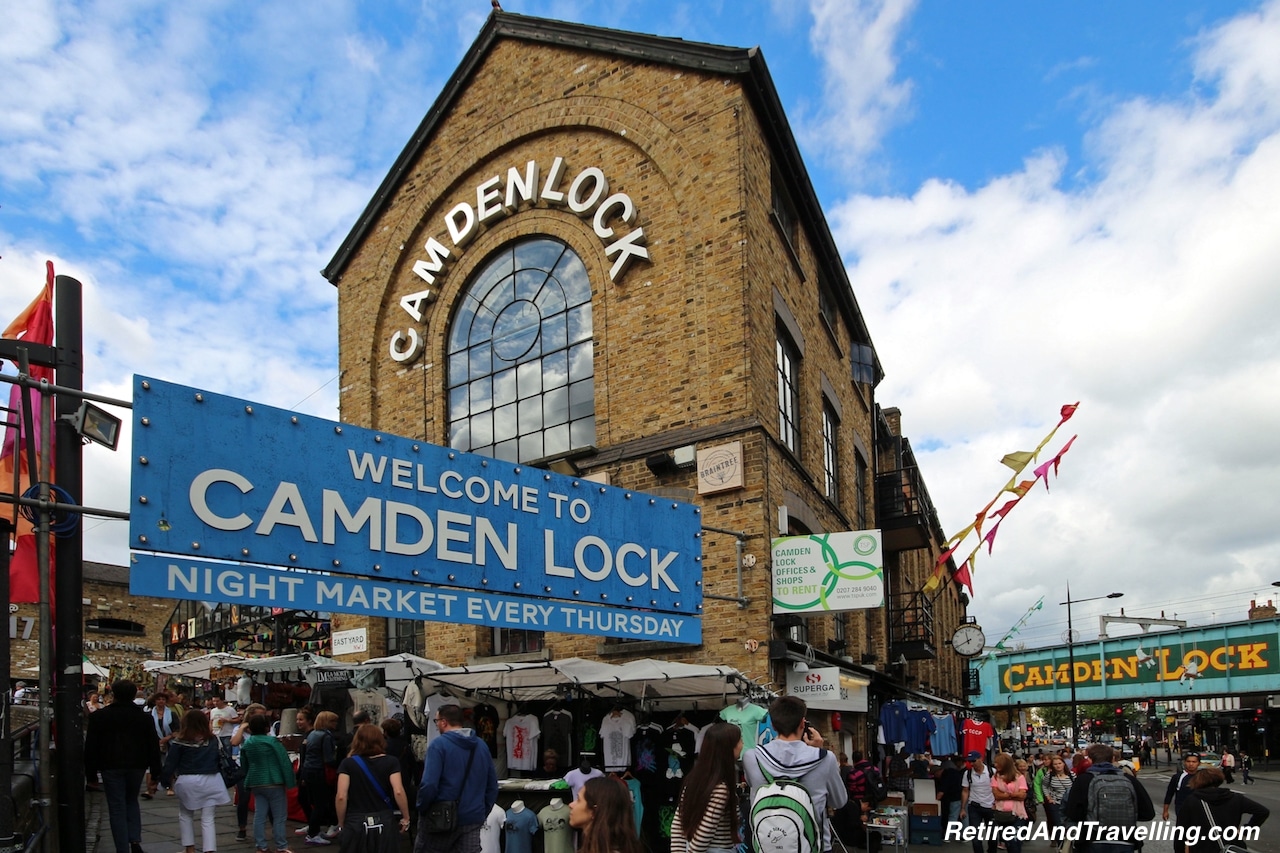 After successfully navigating the London transit system, one bus and one subway ride later we arrived back with a short walk to the hotel. We would find the next day that while we were really close to a tube stop, this particular line was not much use without changing lines at least once. While the hotel had a lift, it didn’t go up to our top floor room so every day we would go up and down the Cinderella stairs with the lean to the inside rail. While our bags had been taken to our room when it was finally ready, the trip back down those steep, narrow stairs would be scary.

Setting an alarm, we had a power nap for a few hours and then started to document our trip. David went off in search of a picnic, returning with a simple meal and a great dry Reisling. While our room bathroom required us to back in to the toilet, all was forgiven when I was able to lie full out in a hot tub and then wrap myself in a big soft towel. We made 10pm before we crashed to sleep for almost 10 hrs to get us solidly on English time

Iconic Sites of Our in London Gateway

Moving a little slowly in the morning, we debated transportation options (to “HopOnHopOff” or not).  We did a quick calculation on the value of a London Pass for our London gateway stop. We decided we would continue to top up our Oyster card and since the extra cost was only 4£, we got a 3 day London Pass (see our break even analysis of our 3 days with the London Pass). Given how much time we lost that first day stopping and lining up to pick up the London Pass, we were lucky to get 2 stops in our first day.

Our cab driver had suggested we try Costa Coffee to be a local. We quickly learned that they absolutely did not want you to take pictures – so keep your camera away! Sitting with our maps, London Pass brochure and notes, we plotted the first stop on our London gateway visit.

Wandering around Picadilly Circus, we tried to find the bus we had selected until giving up and heading back underground. Two tube lines later we alighted at the Tower of London. 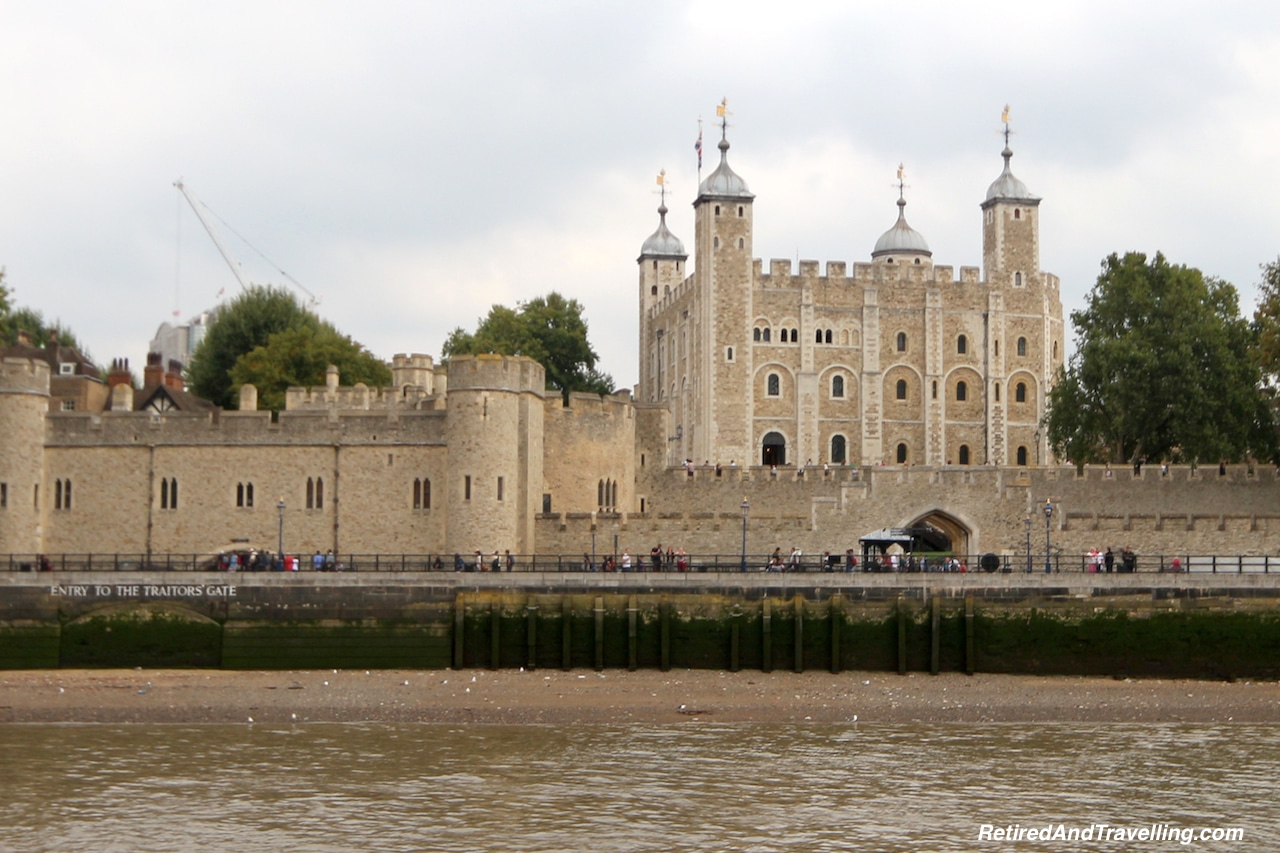 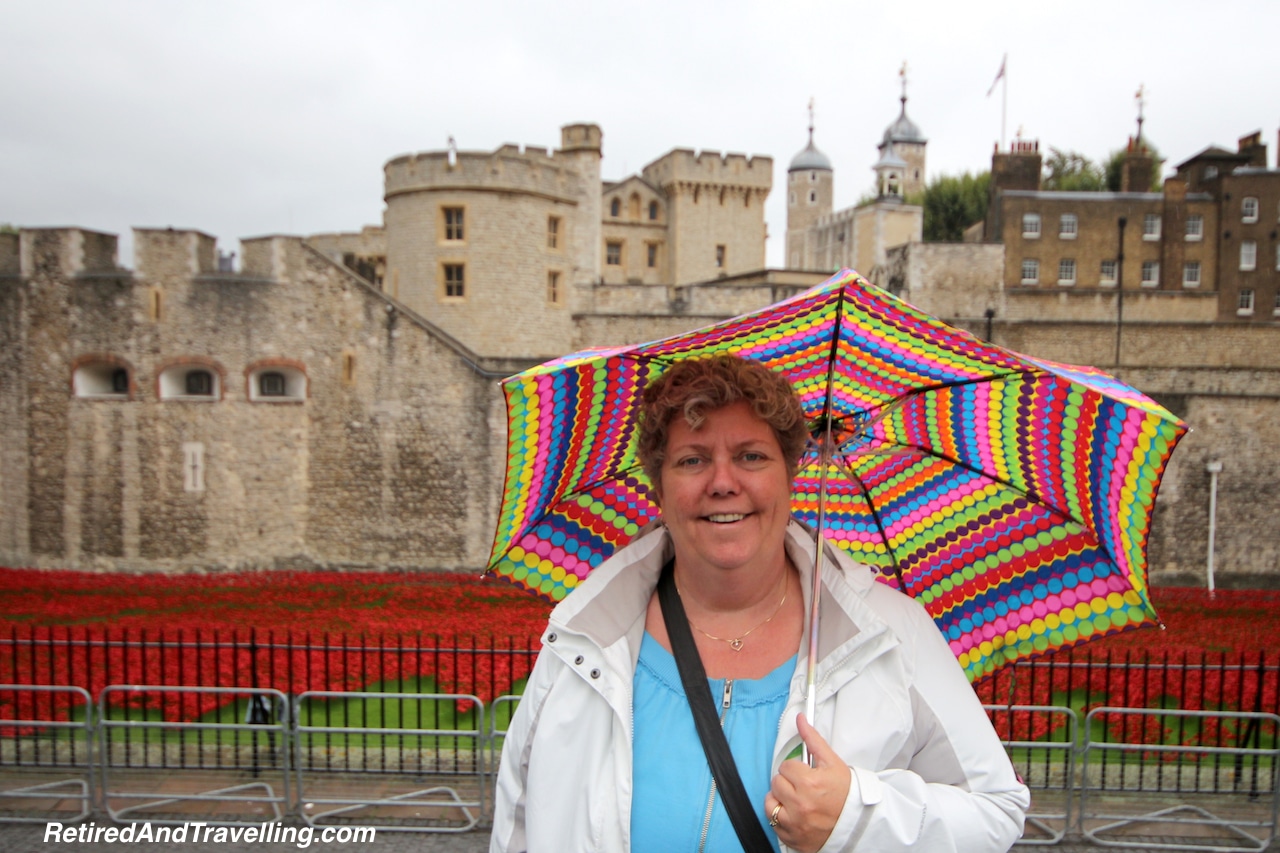 Strolling along outside the gate we could see the poppies filling the moat and bleeding down the outer walls. 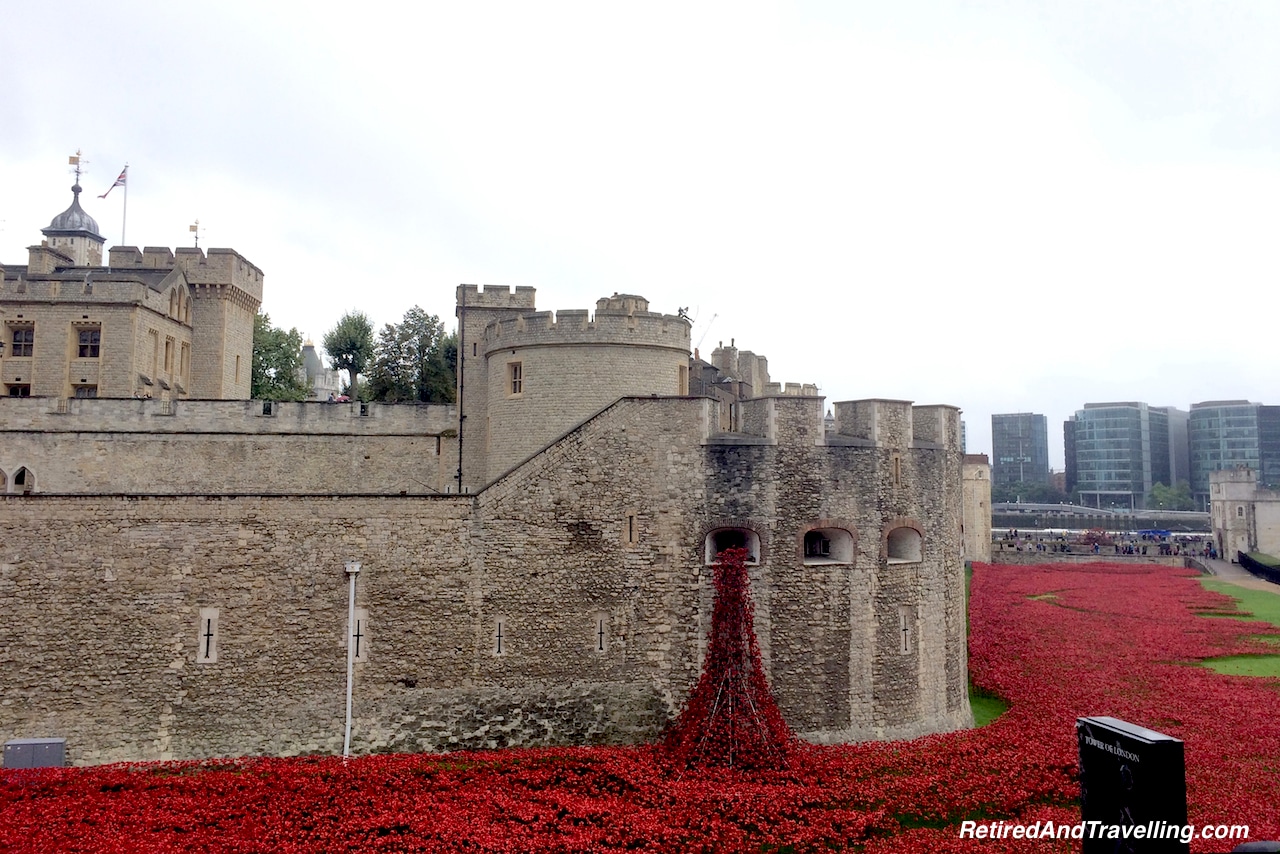 We lucked out and joined a Wardens tour just starting and picked up much about the gruesome history of the Tower of London, with a strong emphasis on beheadings. 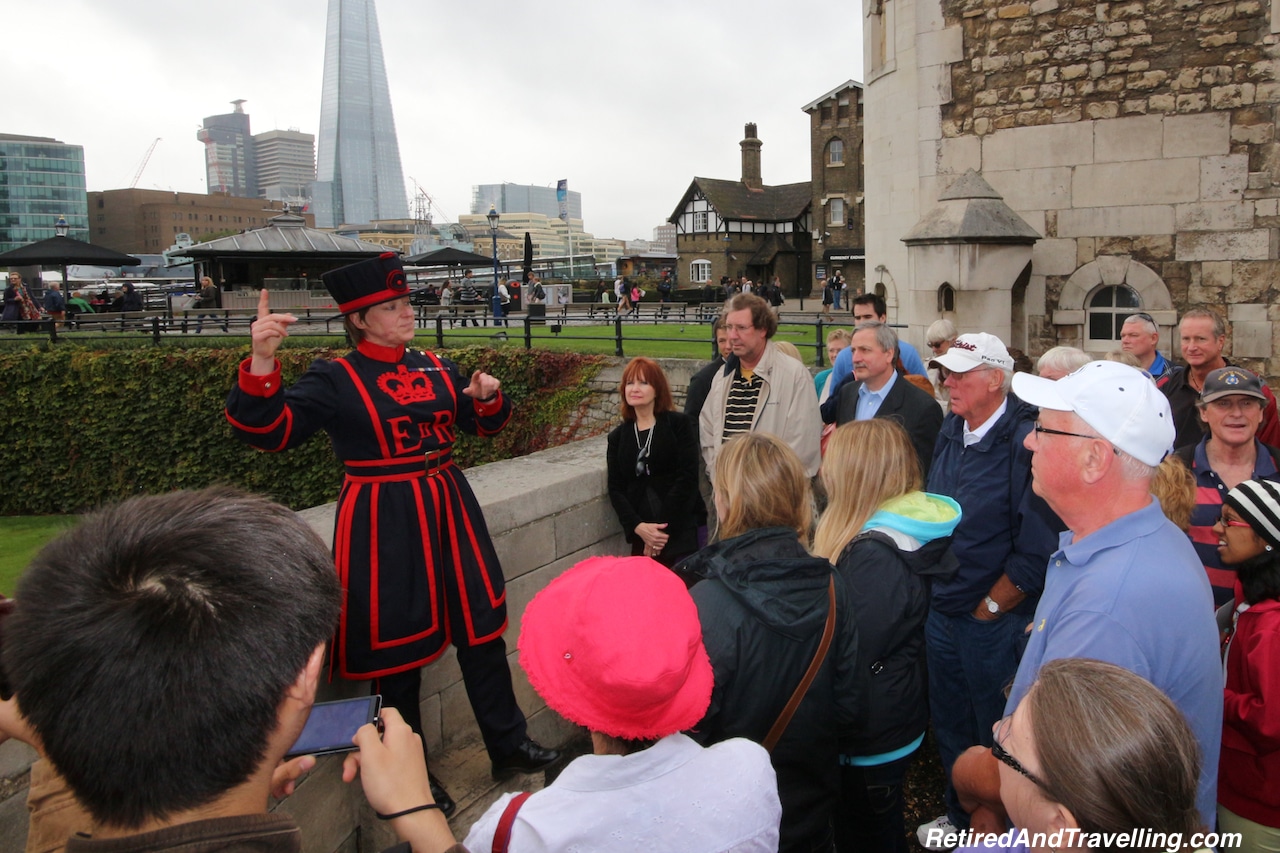 Having had enough, we broke off from the tour to join the long but fast moving queue to see the Crown Jewels. Once the line snaked inside it felt much like an amusement ride with screens placed at intervals to tell short tales as you moved to the vault. The gold plates and goblets were interesting but the jewelled sceptres and crowns were amazing.

We wandered around the Tower of London grounds for awhile before heading to the Tower Bridge. 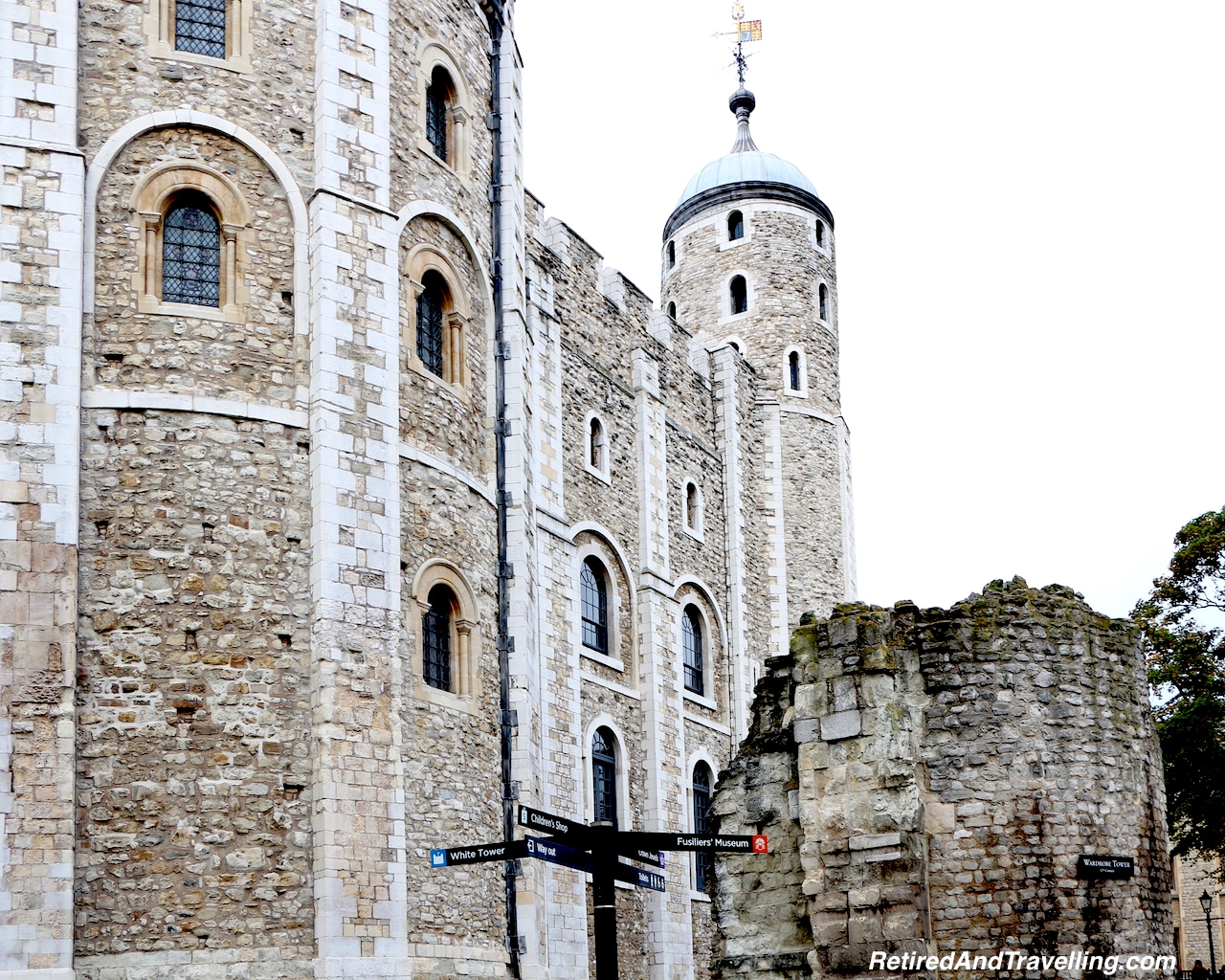 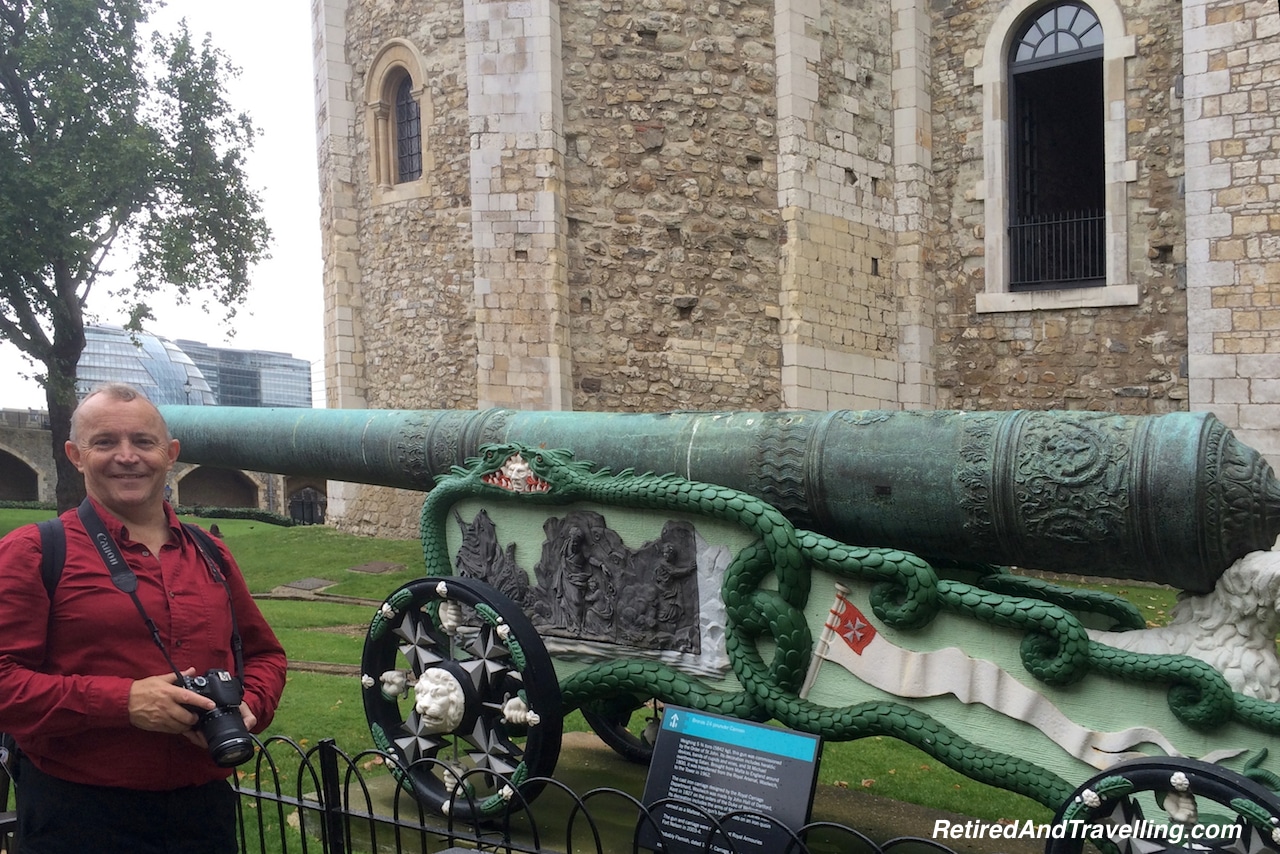 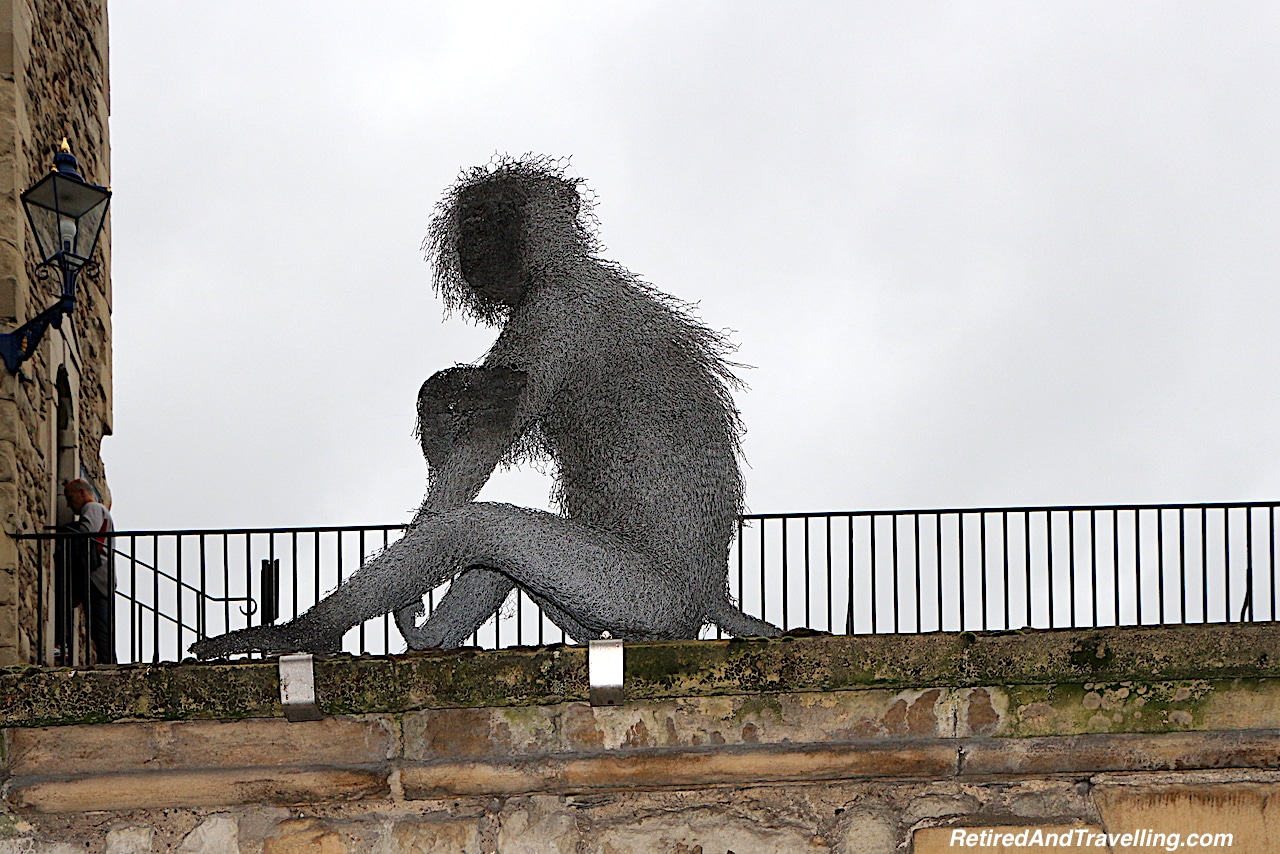 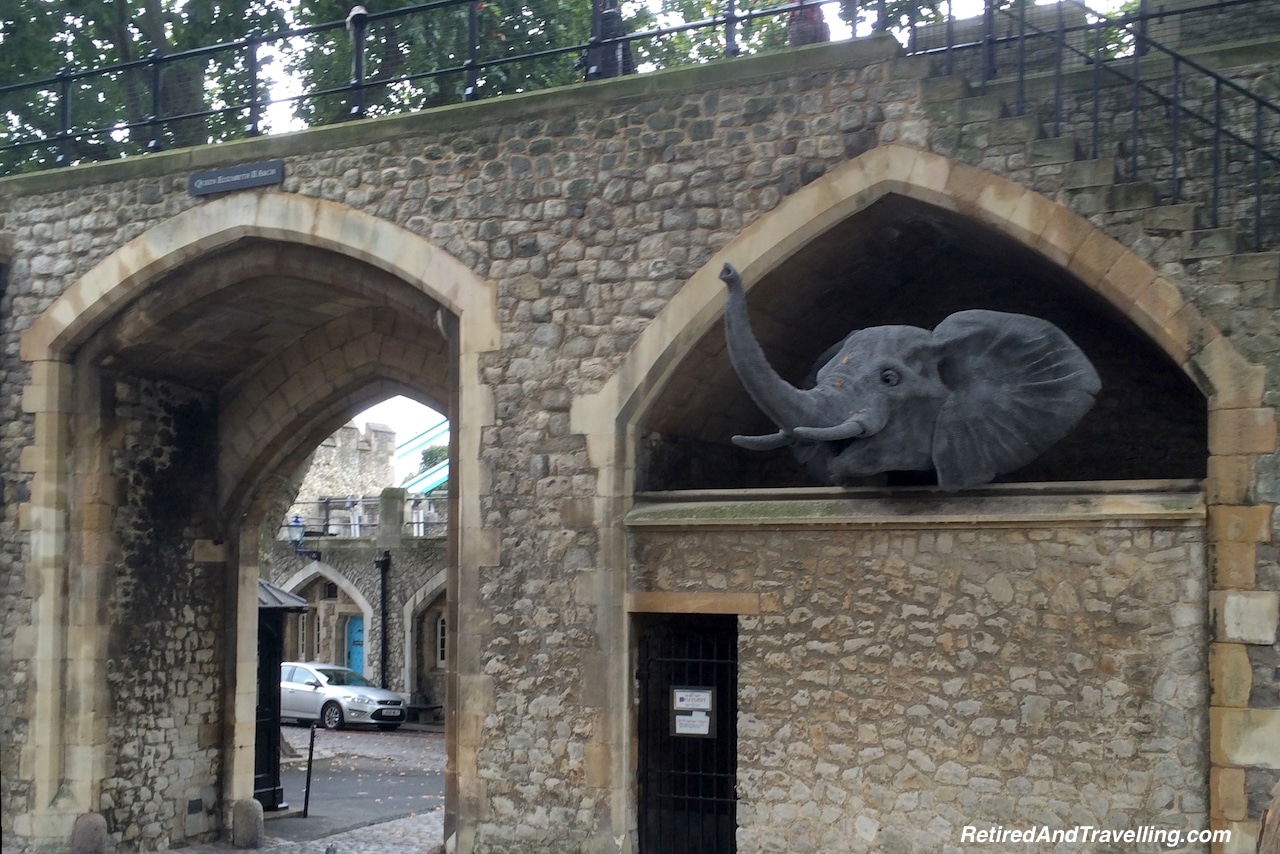 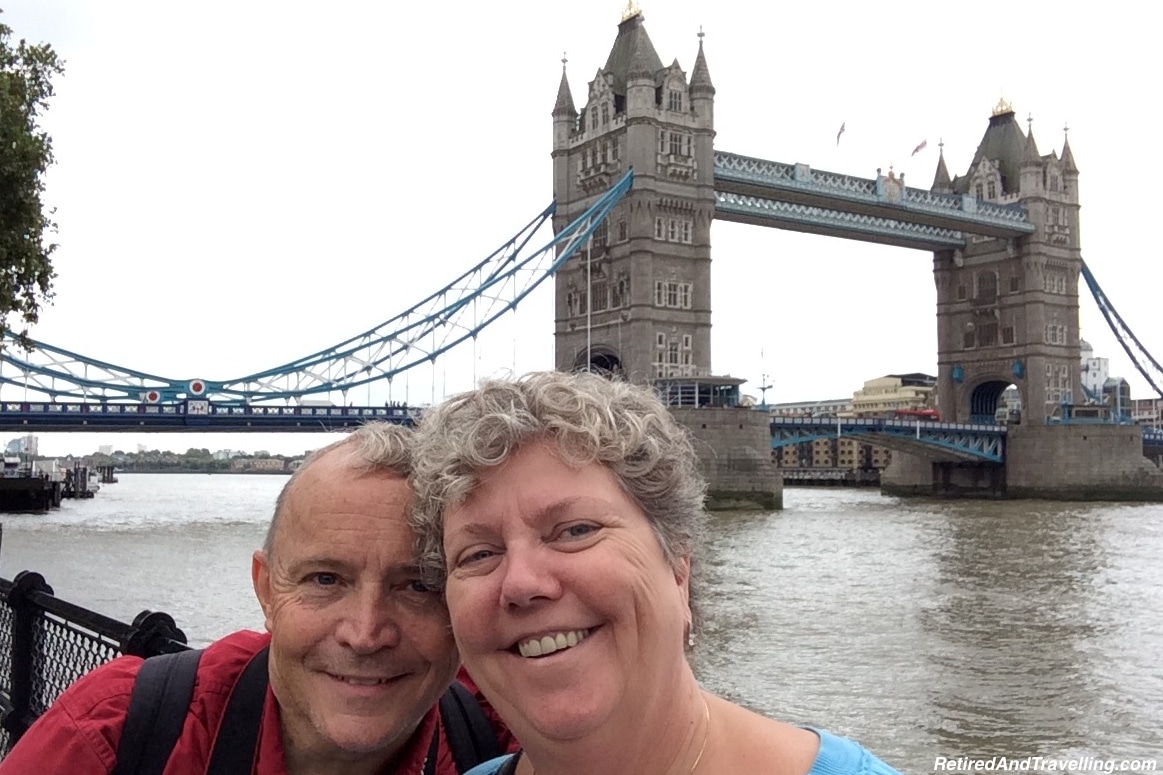 The Tower Bridge tour and videos kept this former civil engineer entertained as we marvelled at the feats of engineering and design for the late 1800’s. The walkways over the bridge offered great views east and west.

With a brief stop at Starbucks at the base of the tower, we were able to recharge our feet for the push home. 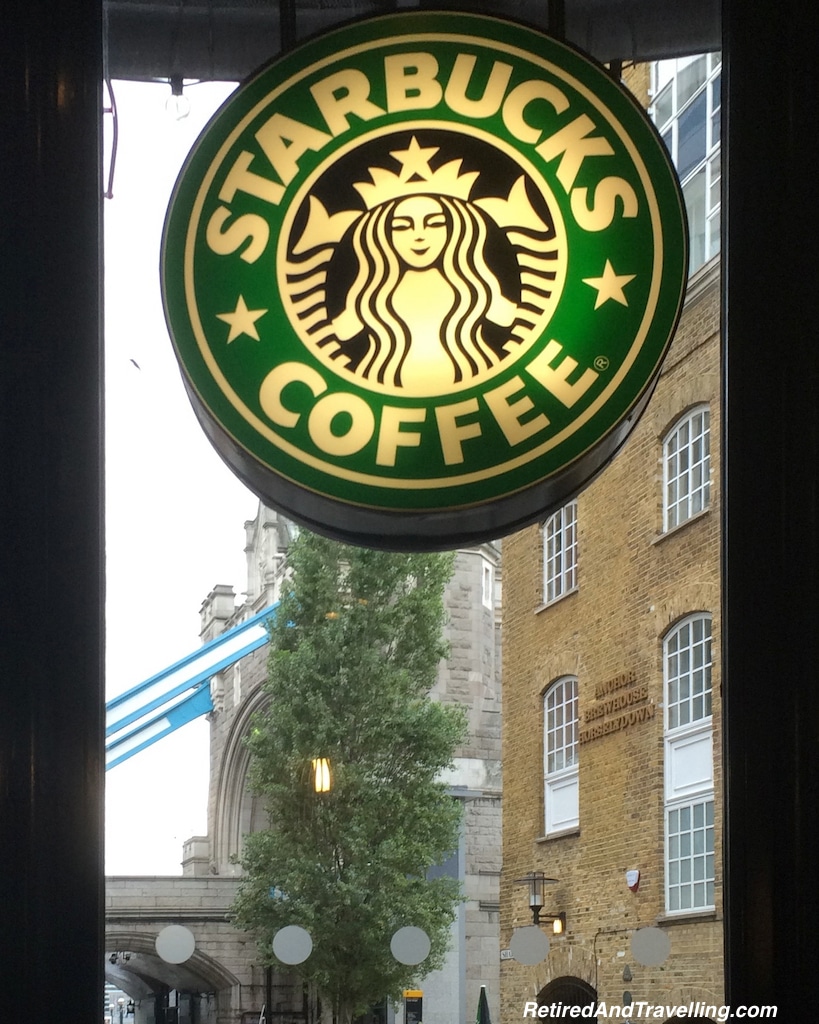 Walking along the Queen’s Walk on the south bank towards the London Bridge, we made a brief stop at Hay’s Galleria to see the interesting metal art The Navigators. 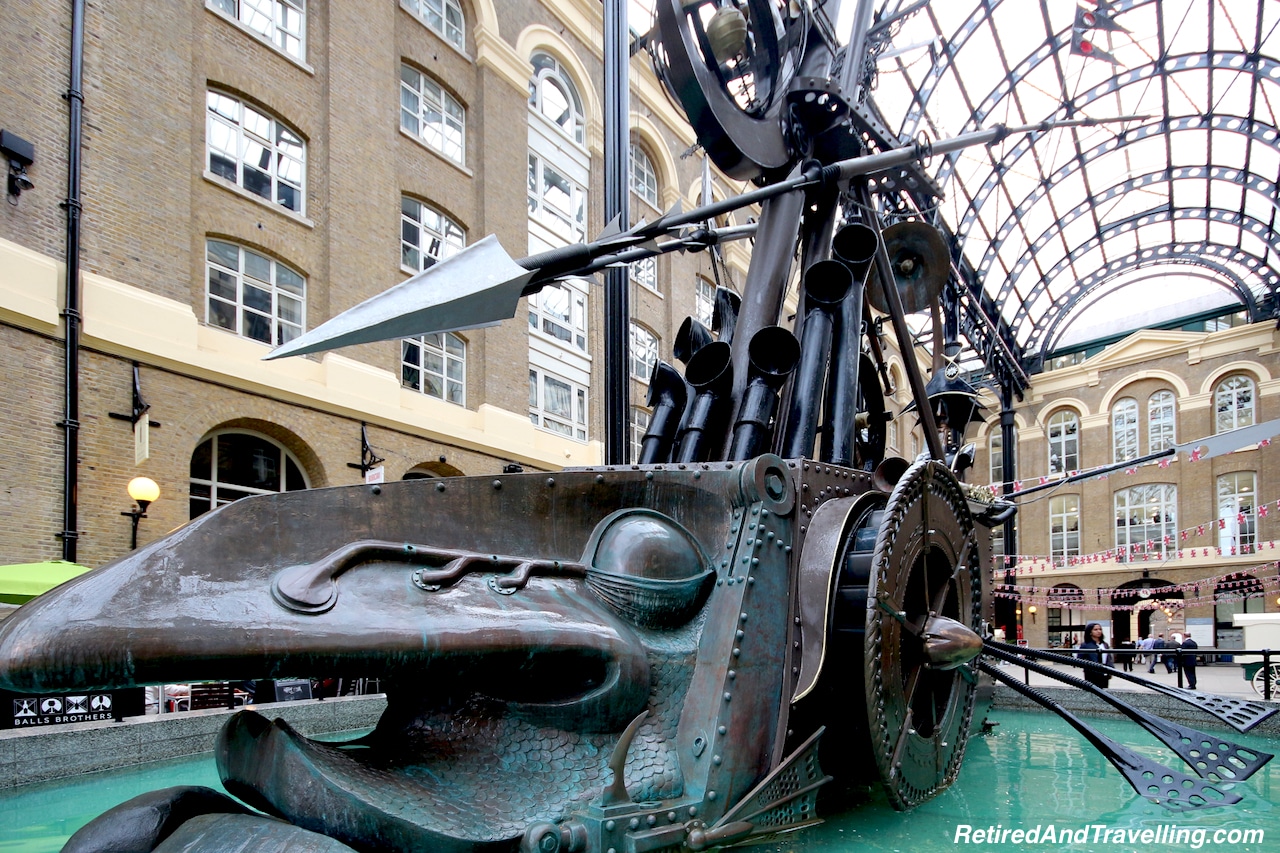 Once we hit the London Bridge tube stop, we were able to plot our way back and dragged our way to a local pub for pub food before crashing for our second night.

Making our way through the easy subway connection (walk across to the other side at Baker between Bakerloo and Jubillee lines) to Westminster stop, we exited from the subway and immediately stopped to peer up at “Big Ben” and snap off a dozen pics (only later would we find that Big Ben is really the bell and not the clock). 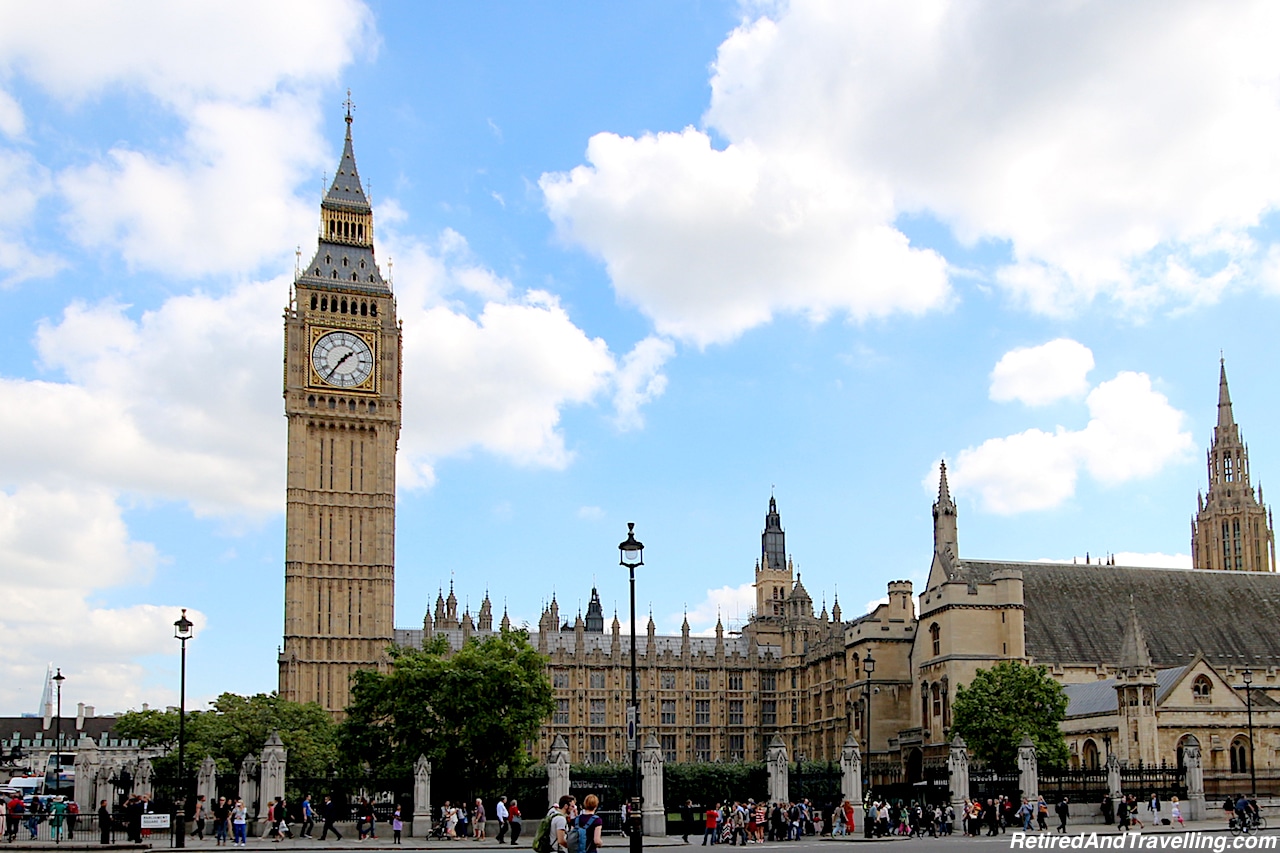 We were able to wander around the outside of the parliament building, but since the government was sitting there were no real tours of the inside until the weekend. 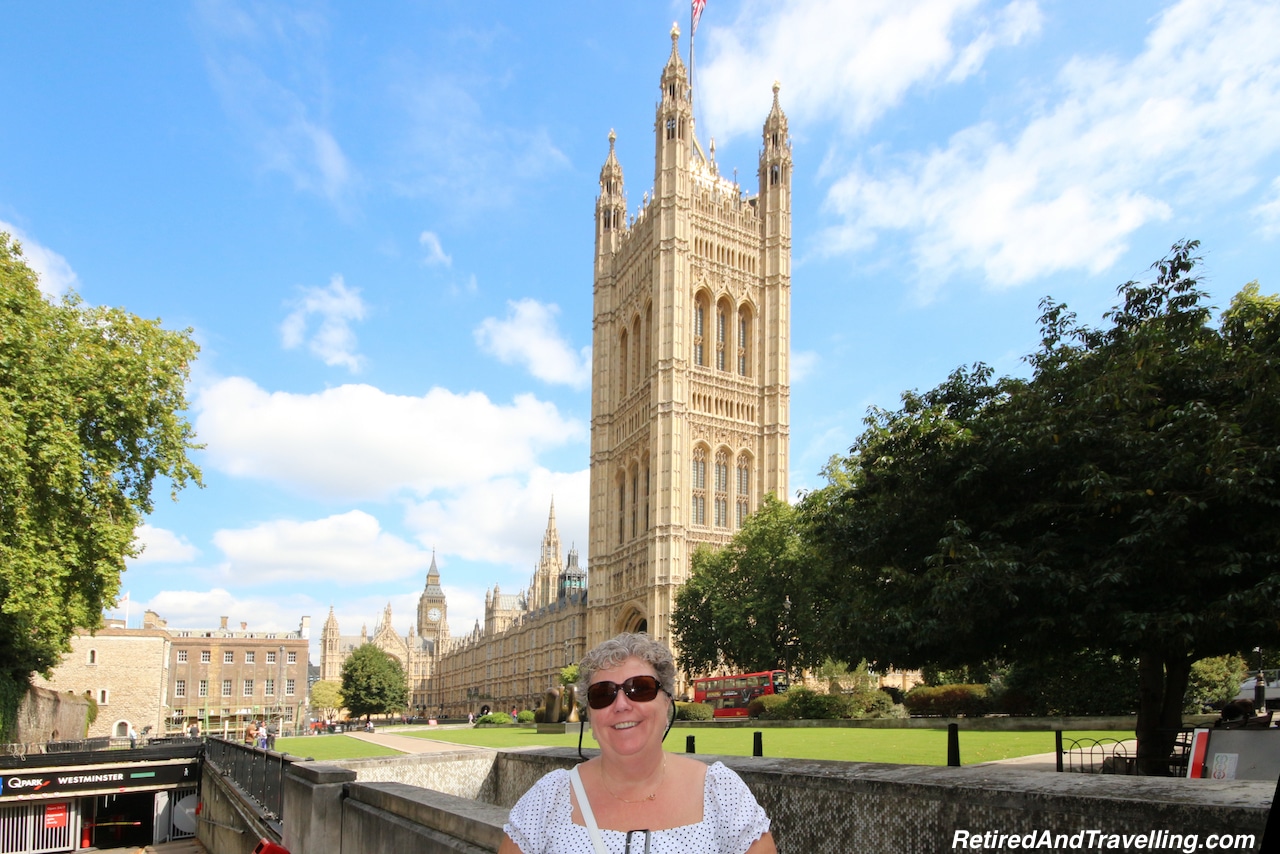 Walking all the way around Westminster Abbey, we joined the line for the north door access. For this site, the entry fee included an audio guide which helped to give us a great overview of the Abbey, it’s history and pointed out the more famous of the 3,000 people buried at the Abbey. The monuments varied in size and style showing the timeframe of the burials or monuments. The audio talked not just of burials but also of coronations and weddings that the famous church had hosted. 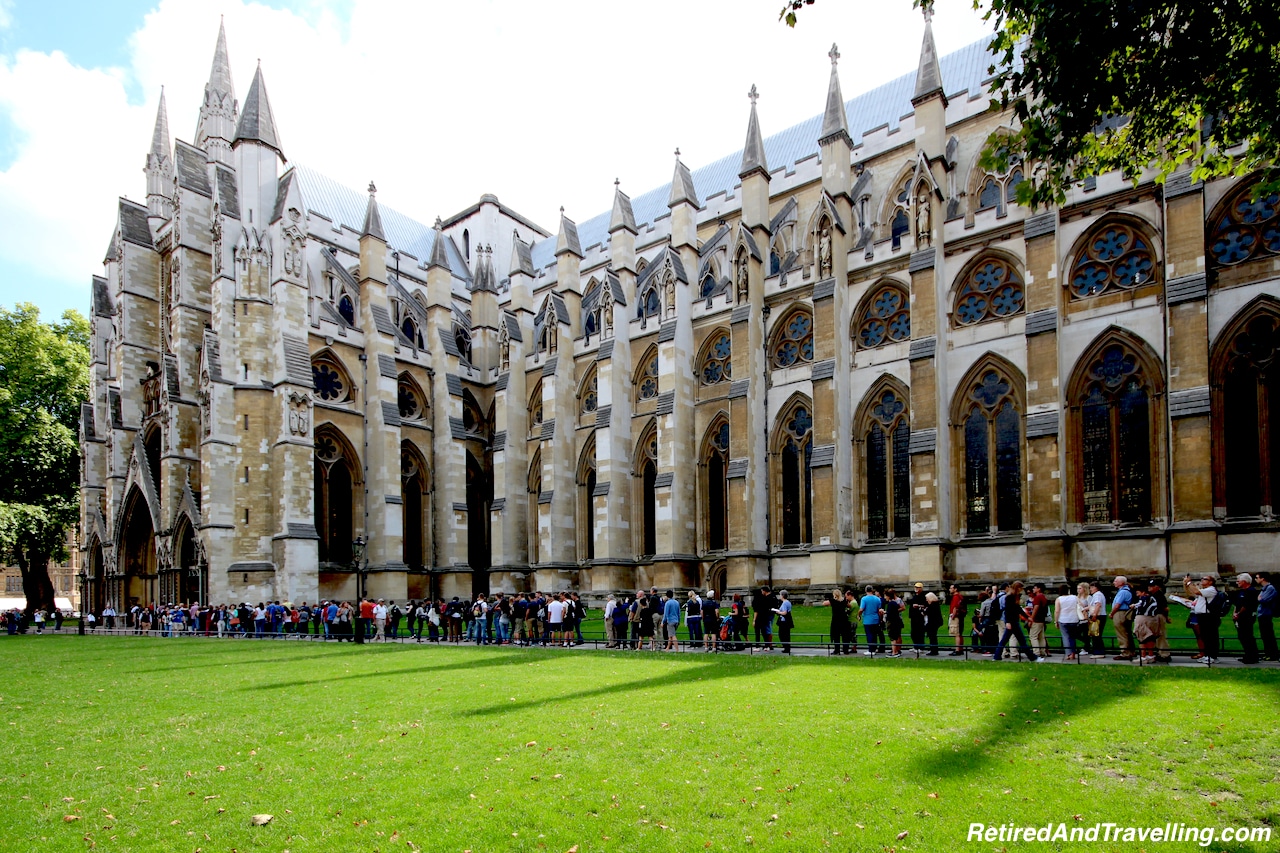 Walking across the bridge to the London Eye, we bypassed the aquarium and London Dungeon attractions. The weather looked good so we opted to get a combo ticket that would let us do the London Eye ride both during the day and at night. This was a great decision on our London gateway stop! 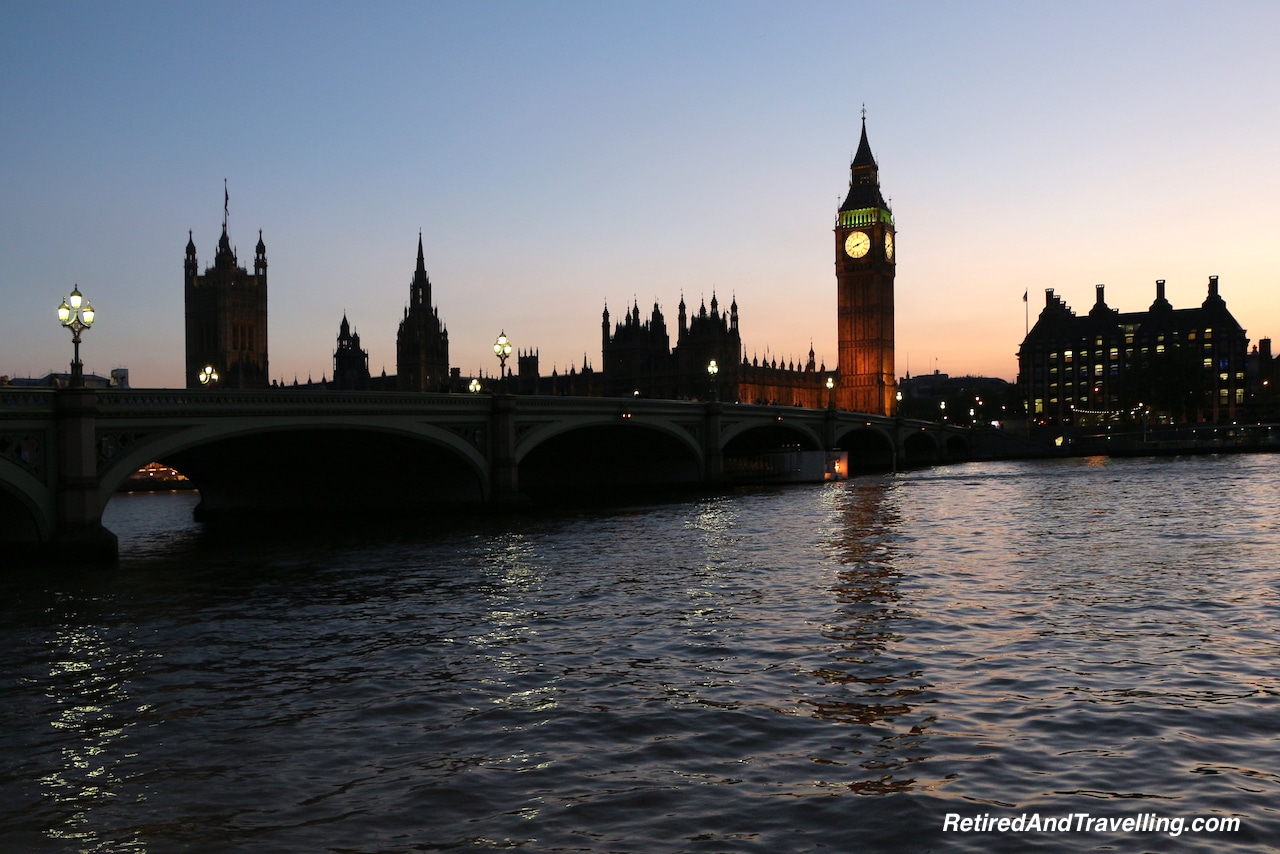 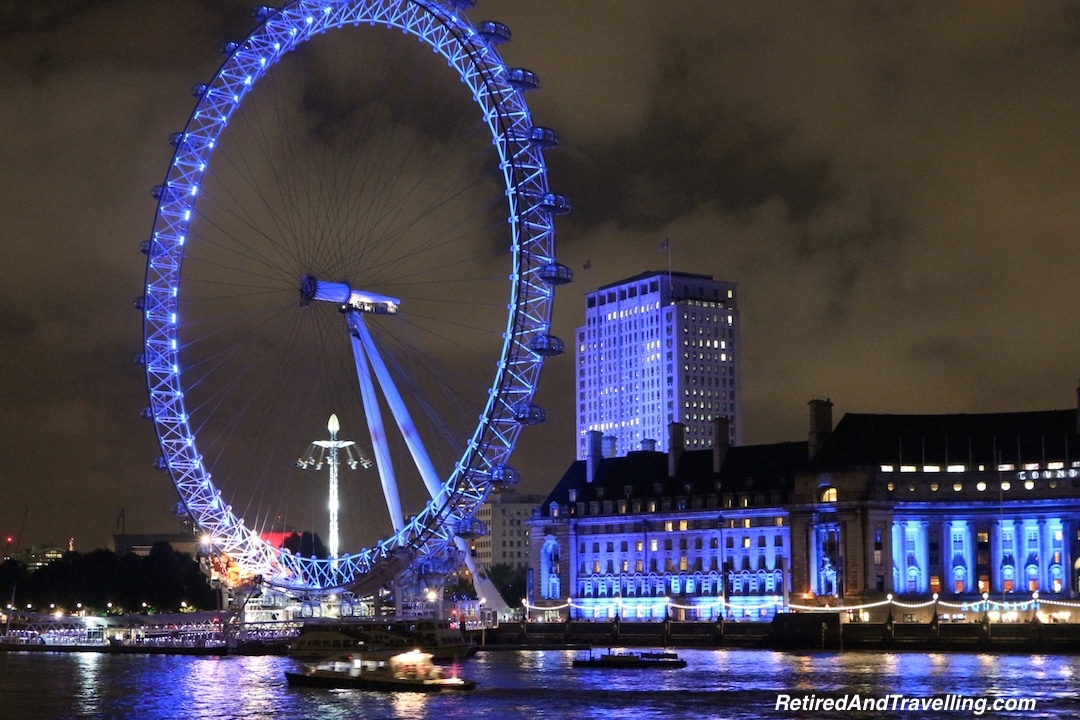 Our trip back into the city that night, after a brief stop at the hotel to rest, cut our travel time a bit close so we gave in and grabbed dinner at McDonalds. Before you screw your nose up, I will note that the chicken and salad we had was probably the healthiest meal we ate our whole time in London! The night view was beautiful and clear – well worth the return visit!

All packed up, we headed back in for the final morning of this London gateway visit. Getting on the City Tours boat at Westminster, we stayed on the boat as far as the Tower bridge (unfortunately we would not have the time to go all the way to Greenwich this time). James (just a crew member and not a guide) provided an amusing commentary throughout the journey. 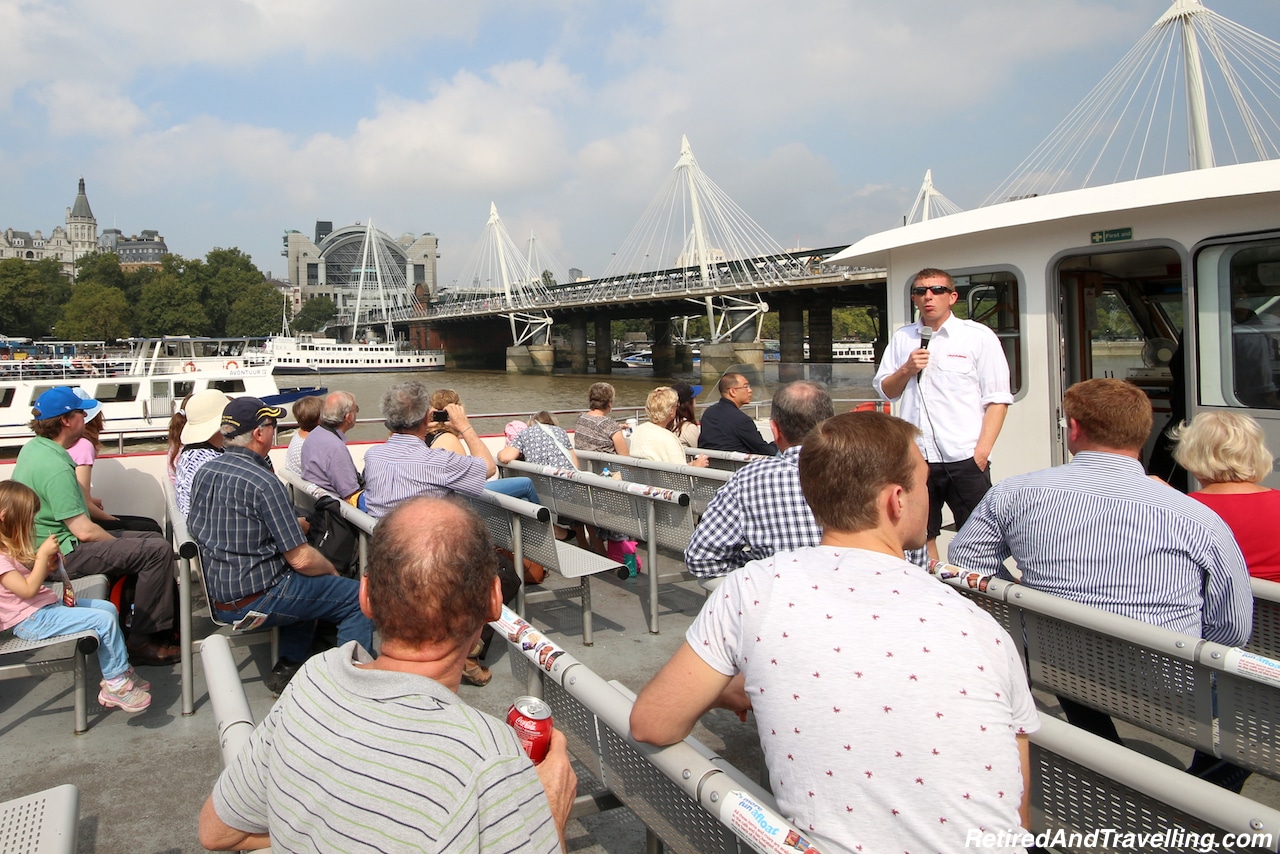 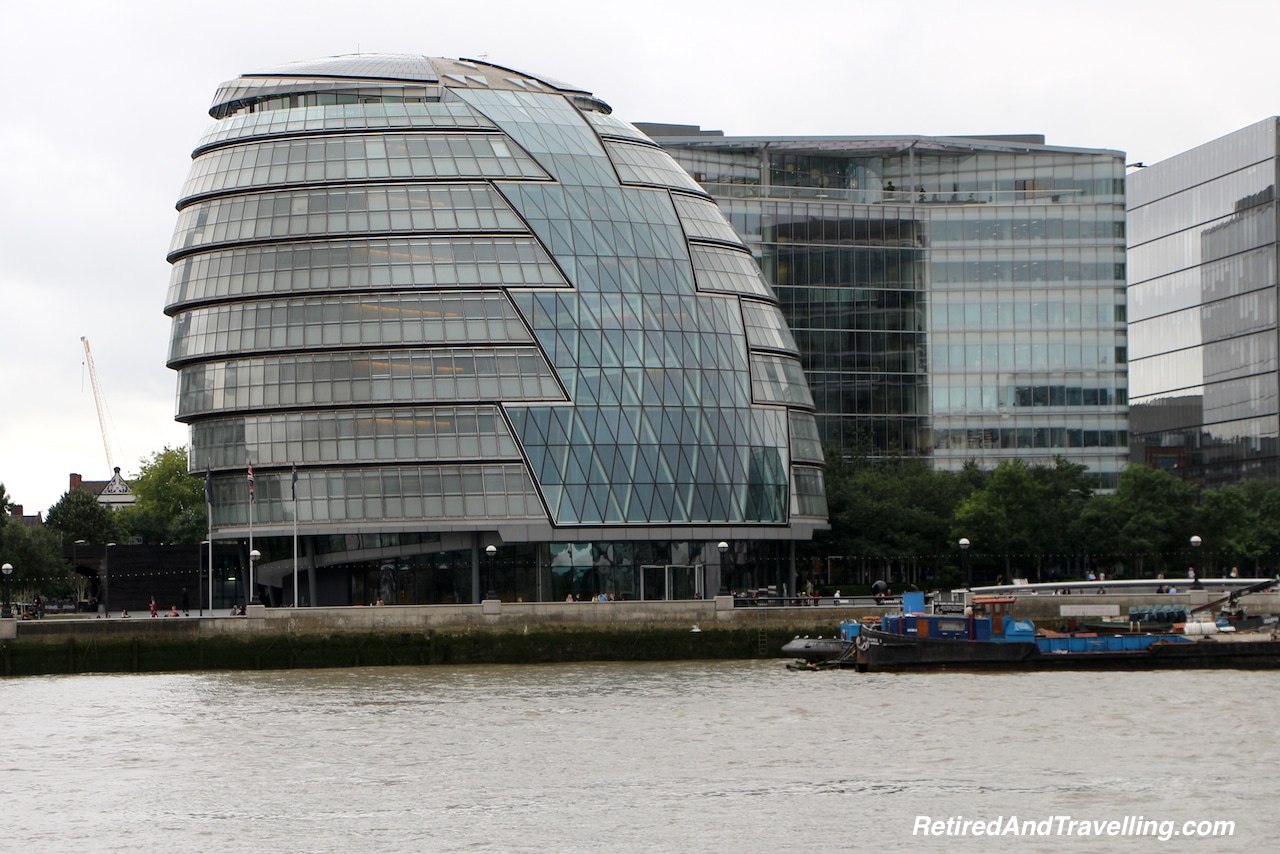 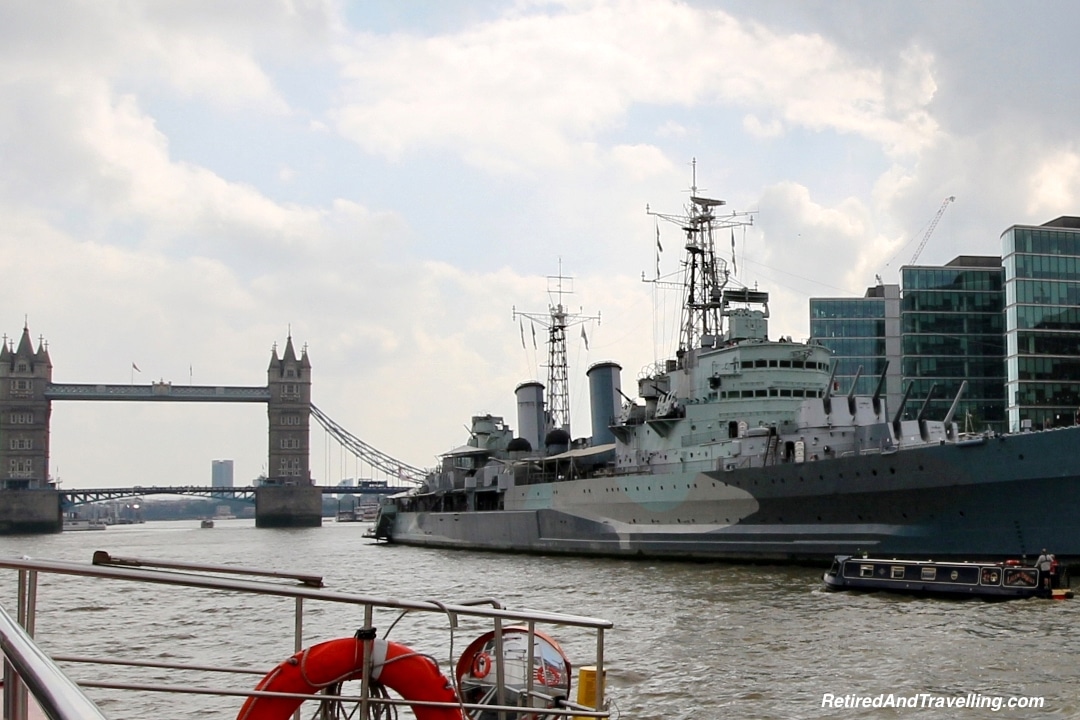 David was prepared to let me wimp out on climbing the Monument but I surprised him. 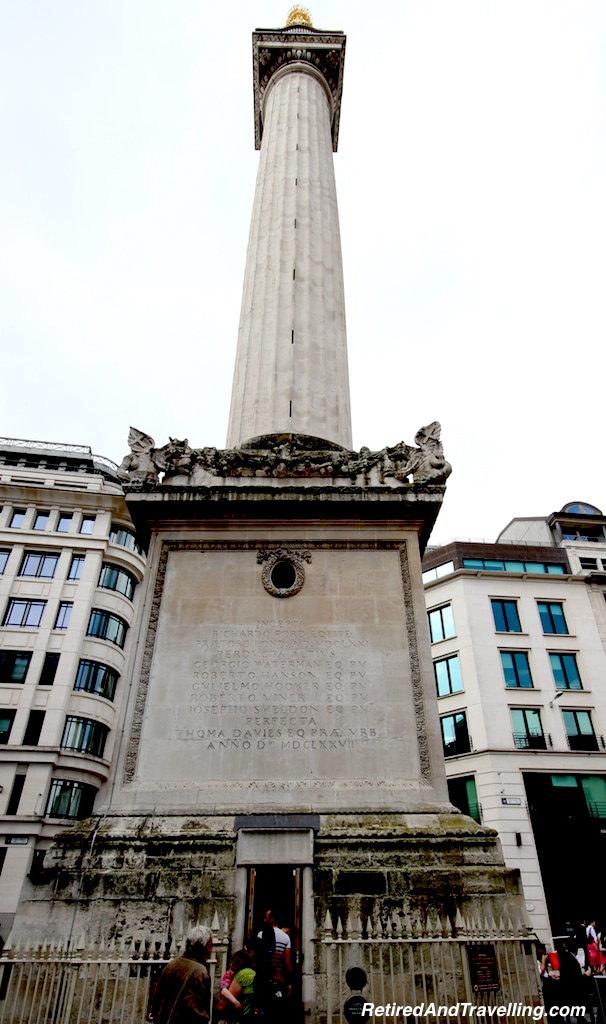 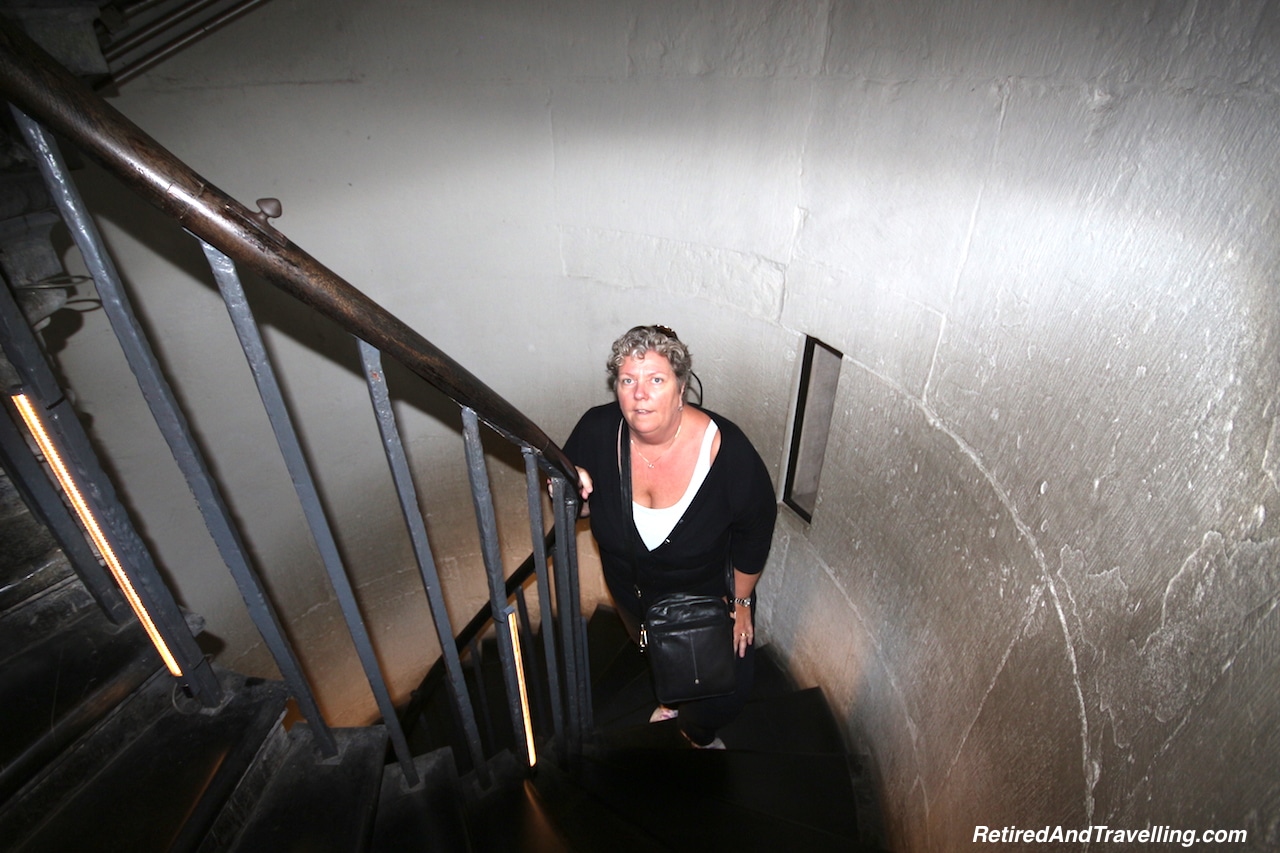 With a few stops to catch my breath, I soldiered on to the top of the 311 steps.  The view from 202′ up showed the area of old London the great fire had burned (commemorated by Christopher Wren with this tower). 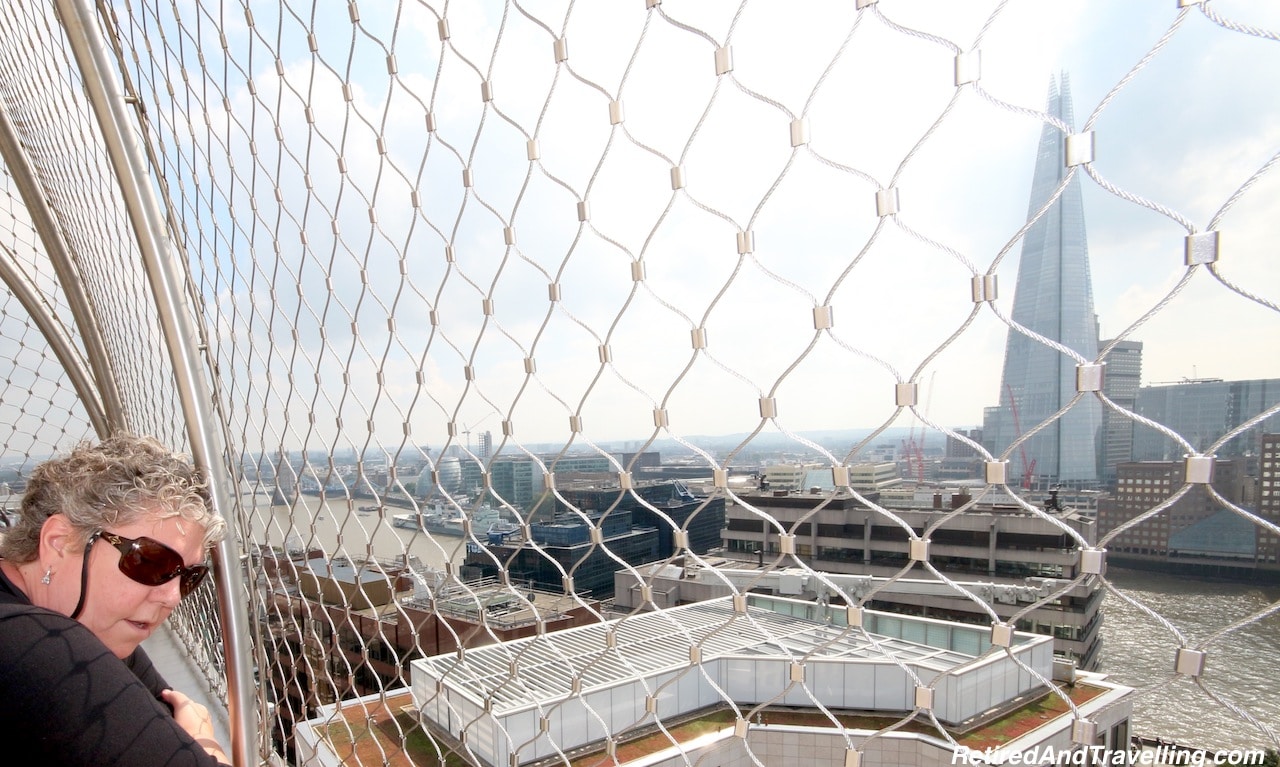 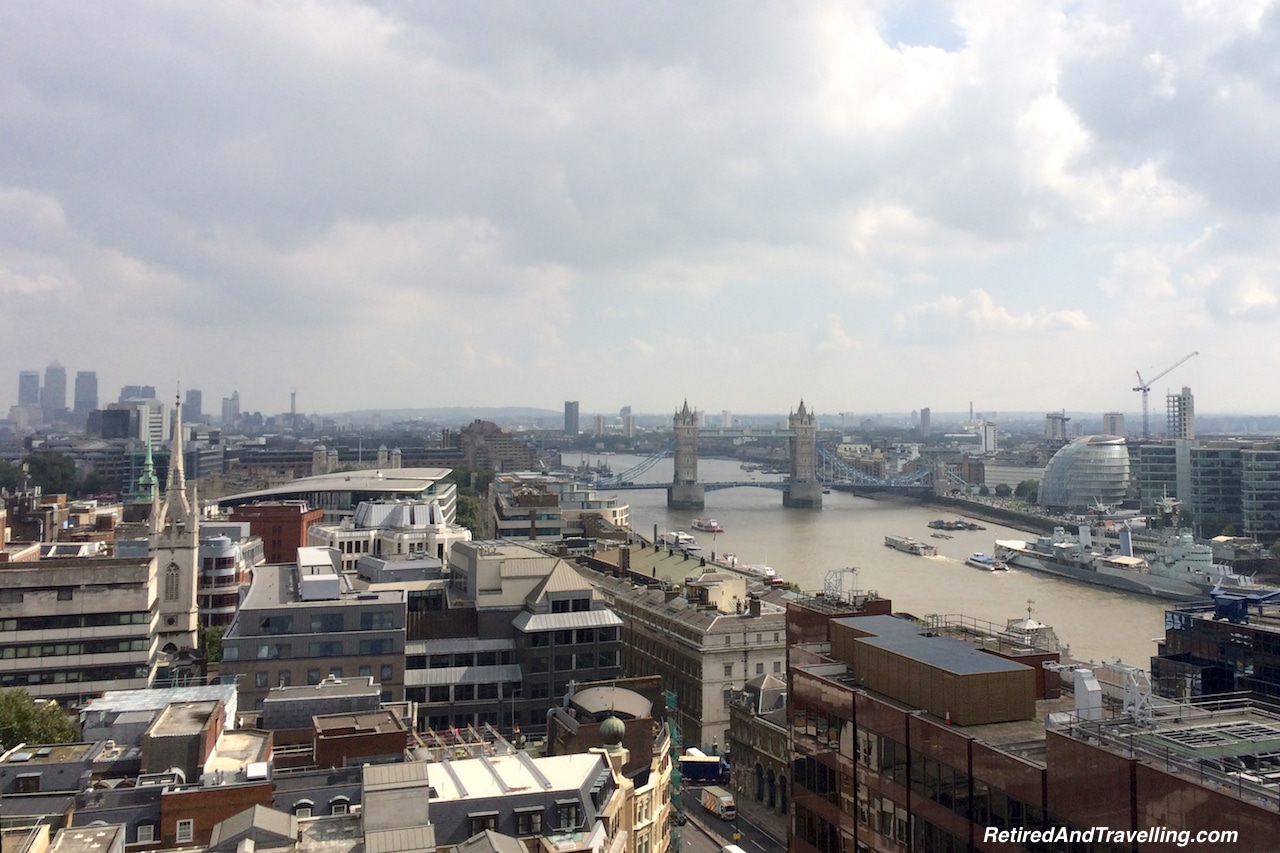 Finishing booking our airport travel with the great wifi service at the top of the Monument, we made the much quicker descent down the 311 steps.

Agreeing to pay the premium for booking a cab at the last minute, we got yet another tour of London as we passed from the west side through town to Gatwick on the far side. We went through many parts of London we would likely not have seen if we had had enough energy left to brave the tube and train trip to the airport. Sometimes there are advantages to taking the easy way out!

This was a great in London gateway stop on our 10 week Italy trip!

We hope this will help you with your trip planning for a London gateway.  It is a whirlwind tour – especially when jet lagged!  We hope to come back.  What should be on the top of our list that we missed? 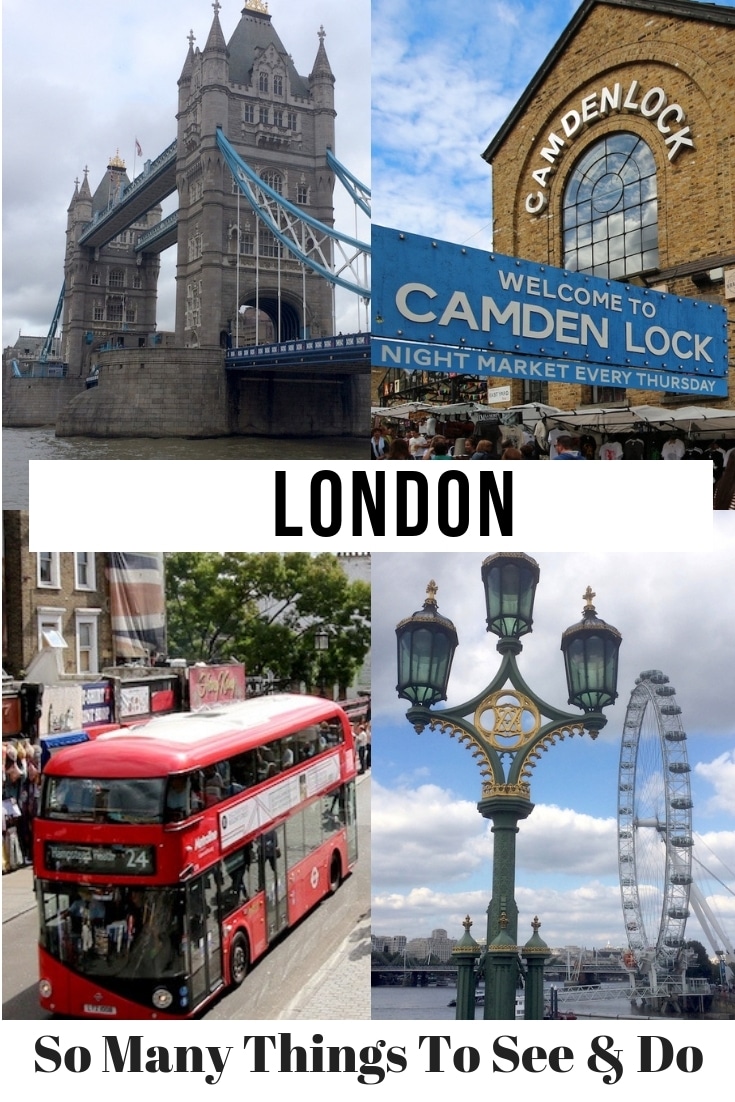 A Day Trip To Visit Schaffhausen And The Rhine Falls

A Sunny Day For A Day Trip From Zurich We had several things planned for our short stay in Zurich. We waited for the first sunny morning and headed out for a a day trip […]

Heading To A Stay In French Wine Country It was time to leave the French Riviera after exploring from first Nice and then Avignon. Our next stop would be a brief stay in French wine […]

We would love if you could share this!
32
32
Shares

A Well Travelled Path On The Adriatic Coast of Italy