Visiting the Karnak Temple in Luxor

We saw many temples and tombs when we visited the Luxor area of Egypt. The first temple we saw in-depth was the Karnak Temple. Our visit to Luxor was an overnight tour for 2 days. This gave us a great chance to see the Karnak Temple day and night. During the day we saw the detail and could wander into the nooks and alleys. At night we were led through the temple with narrated stories told with lights and music.  Between the day and night visit, we saw the Luxor Temple. 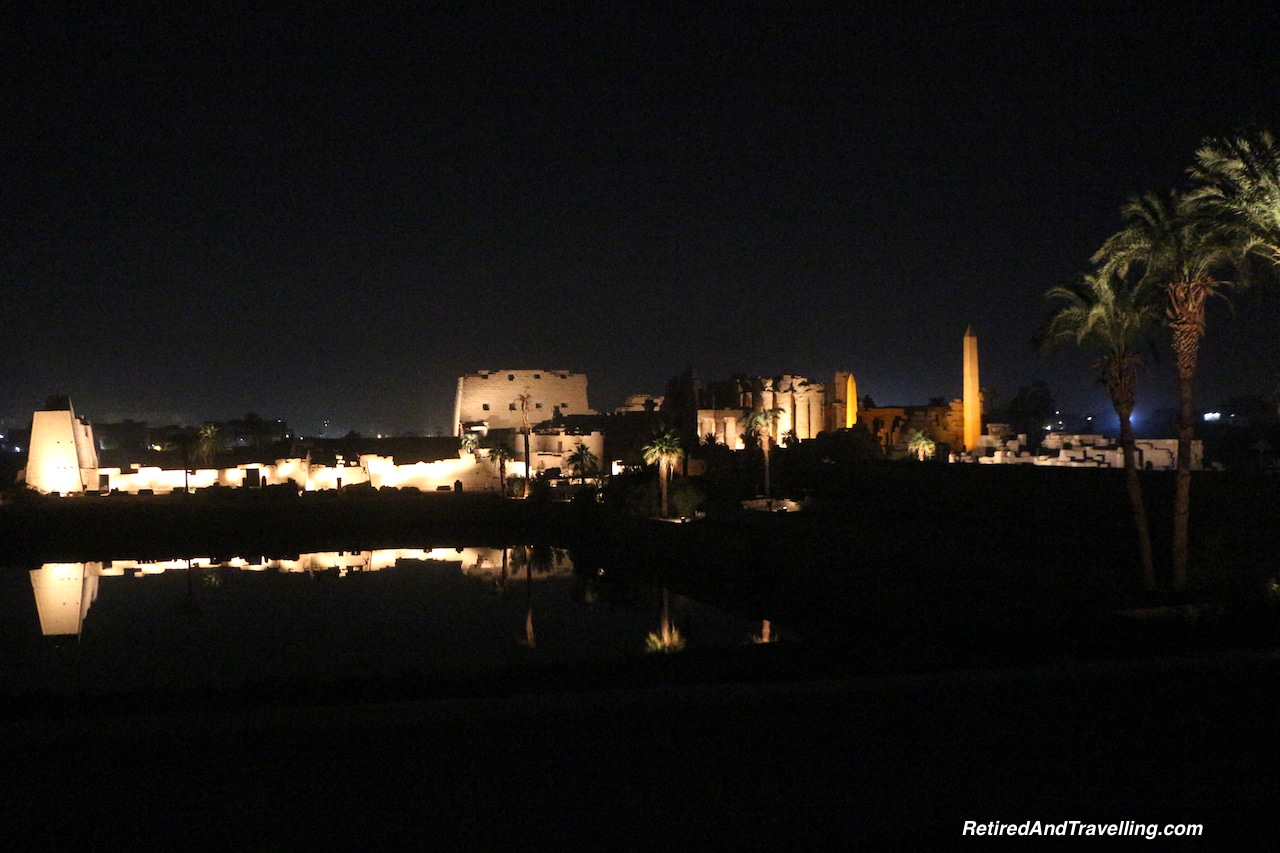 The Karnak Temple is the largest temple ever built. This great temple of Amun-Ra which was begun by Pharaoh Ramses II over 3,000 years ago. Each pharaoh added his own contribution to the temple over 2,000 years. Throughout the temple you will find images of the pharaohs and their queens. 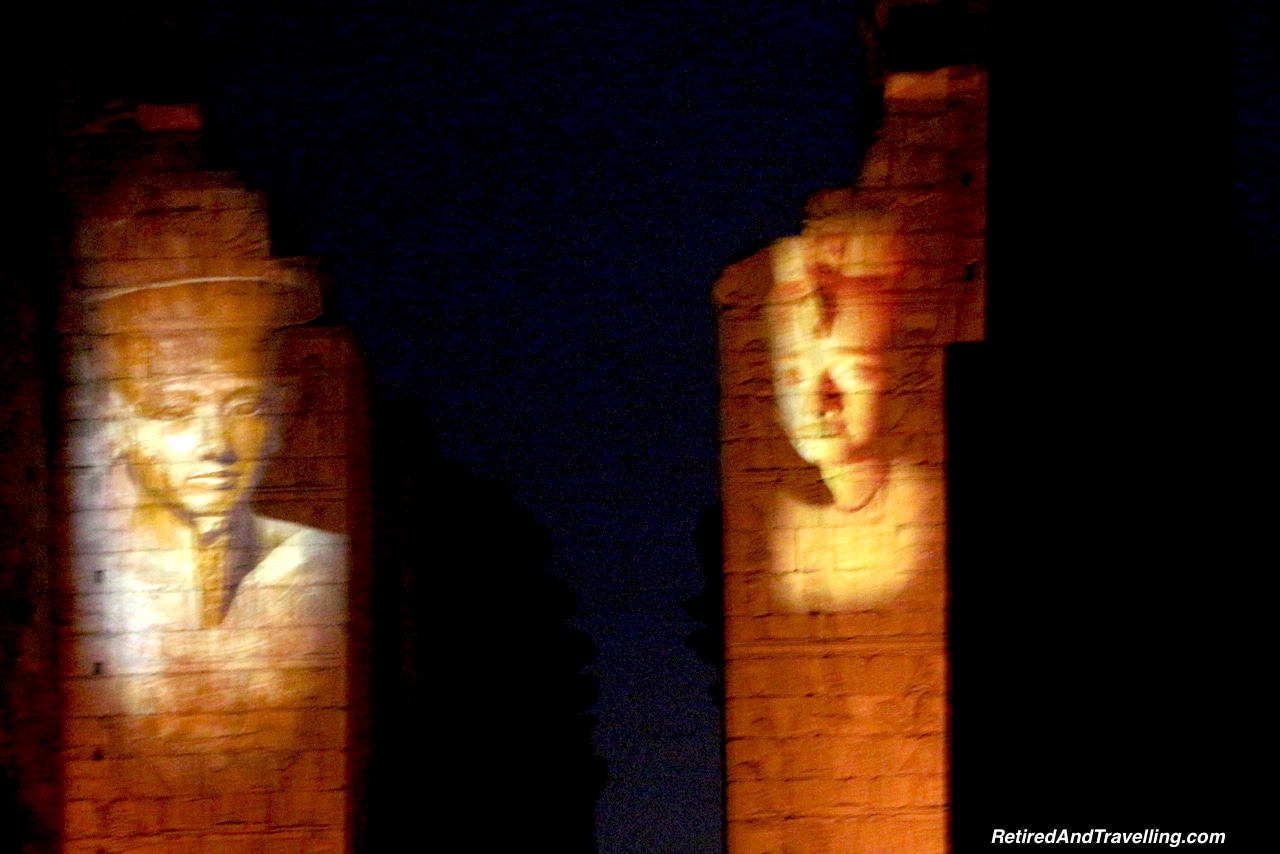 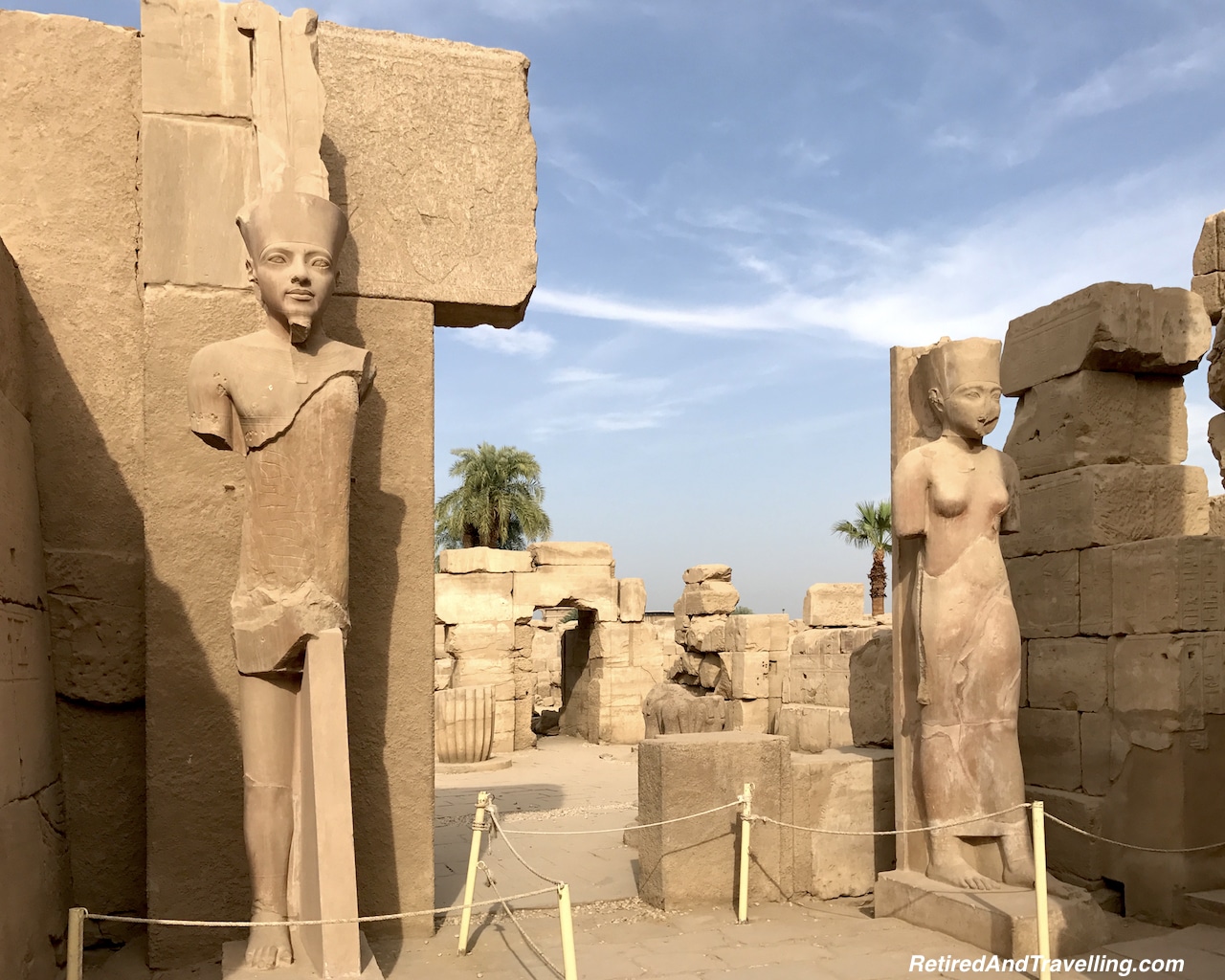 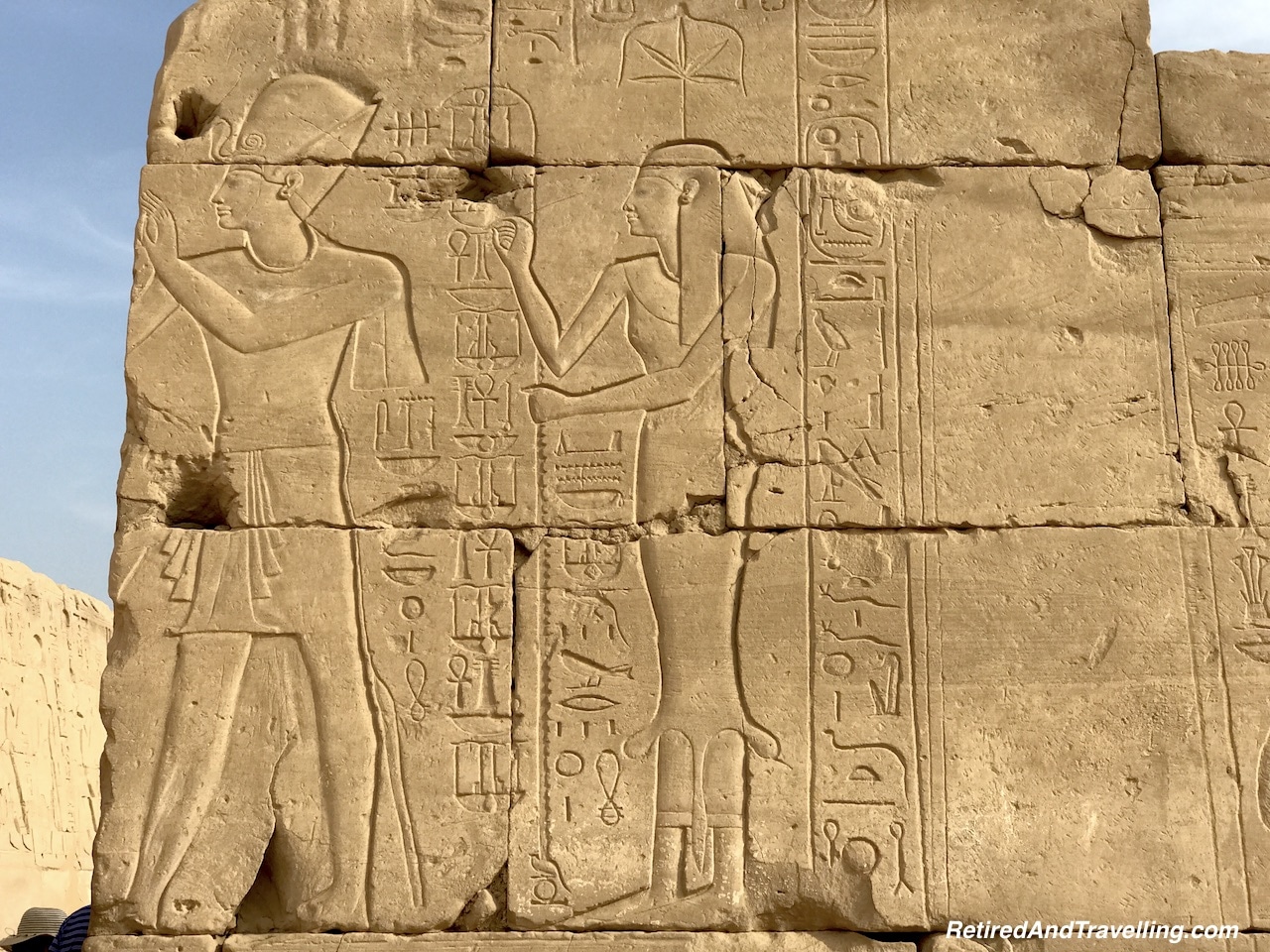 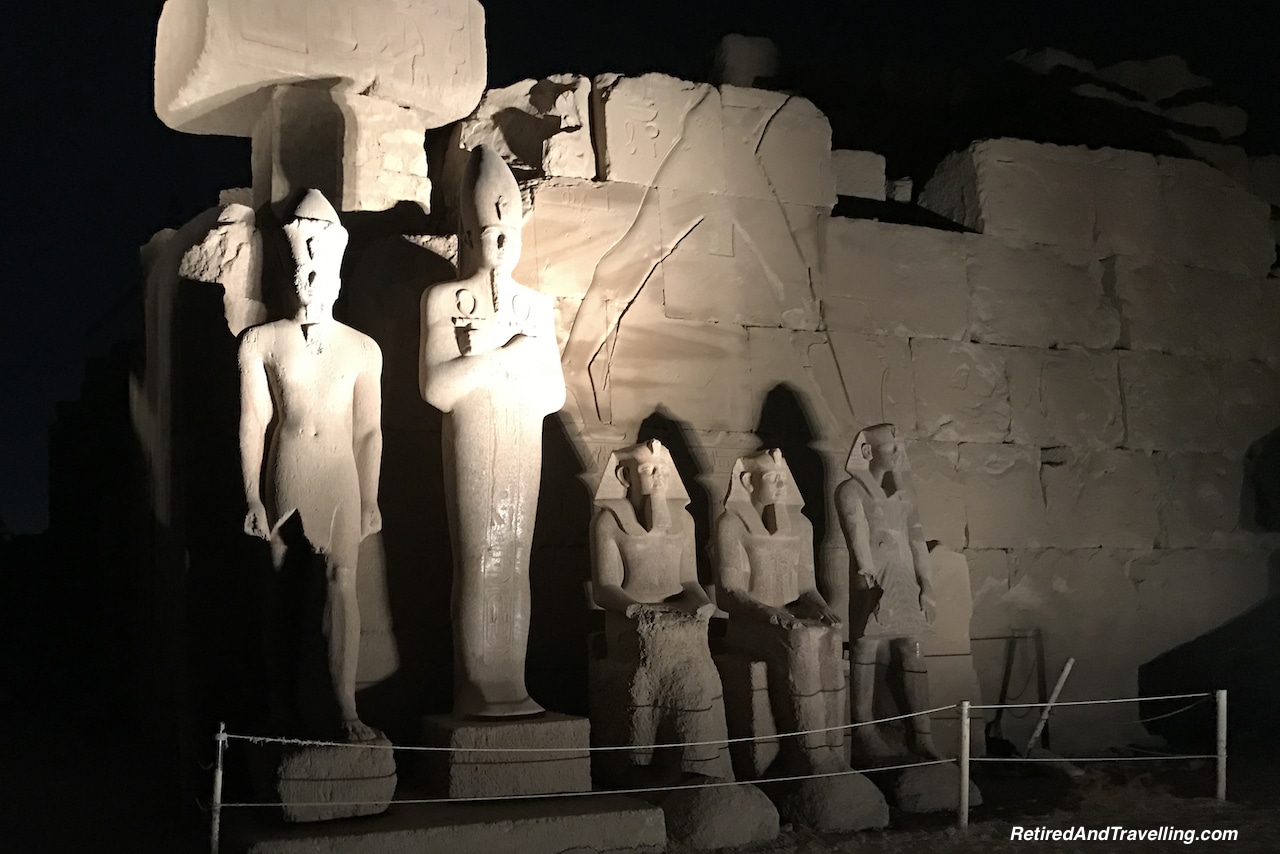 It felt like a sprawling open air museum. As you moved through the temple, you could discover one wonder after another.

Avenue of the Sphinxes

Entering in the visitor centre, we headed off with our guide. Mervat provided great detail as we went from section to section. 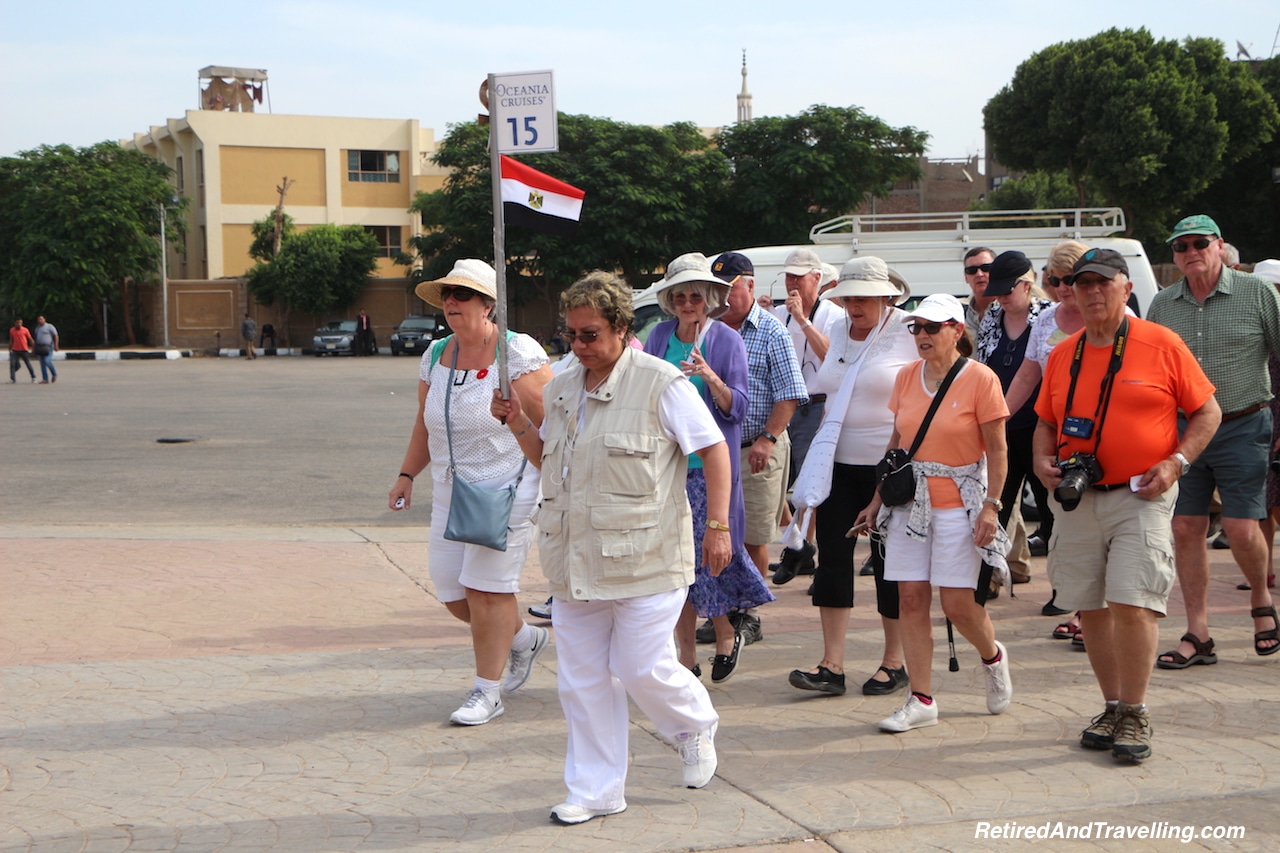 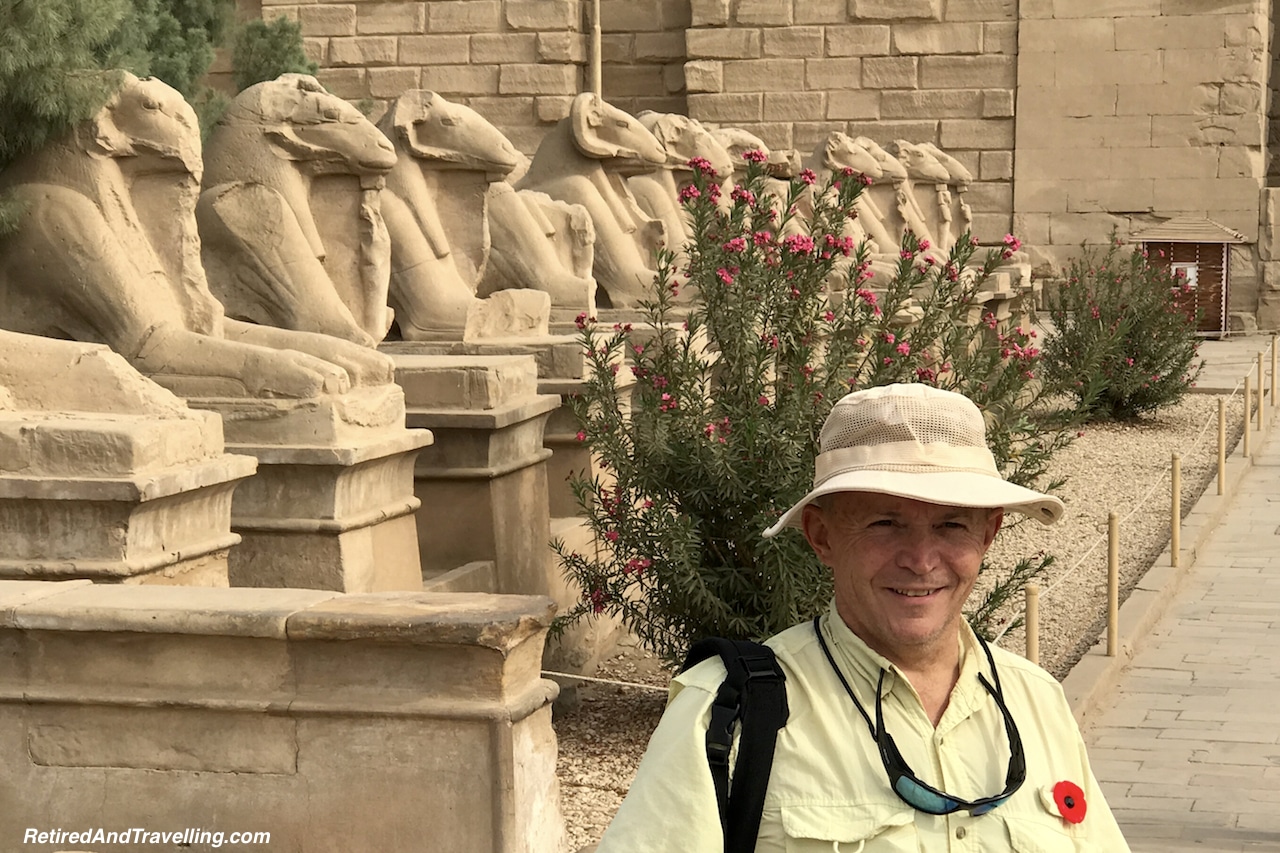 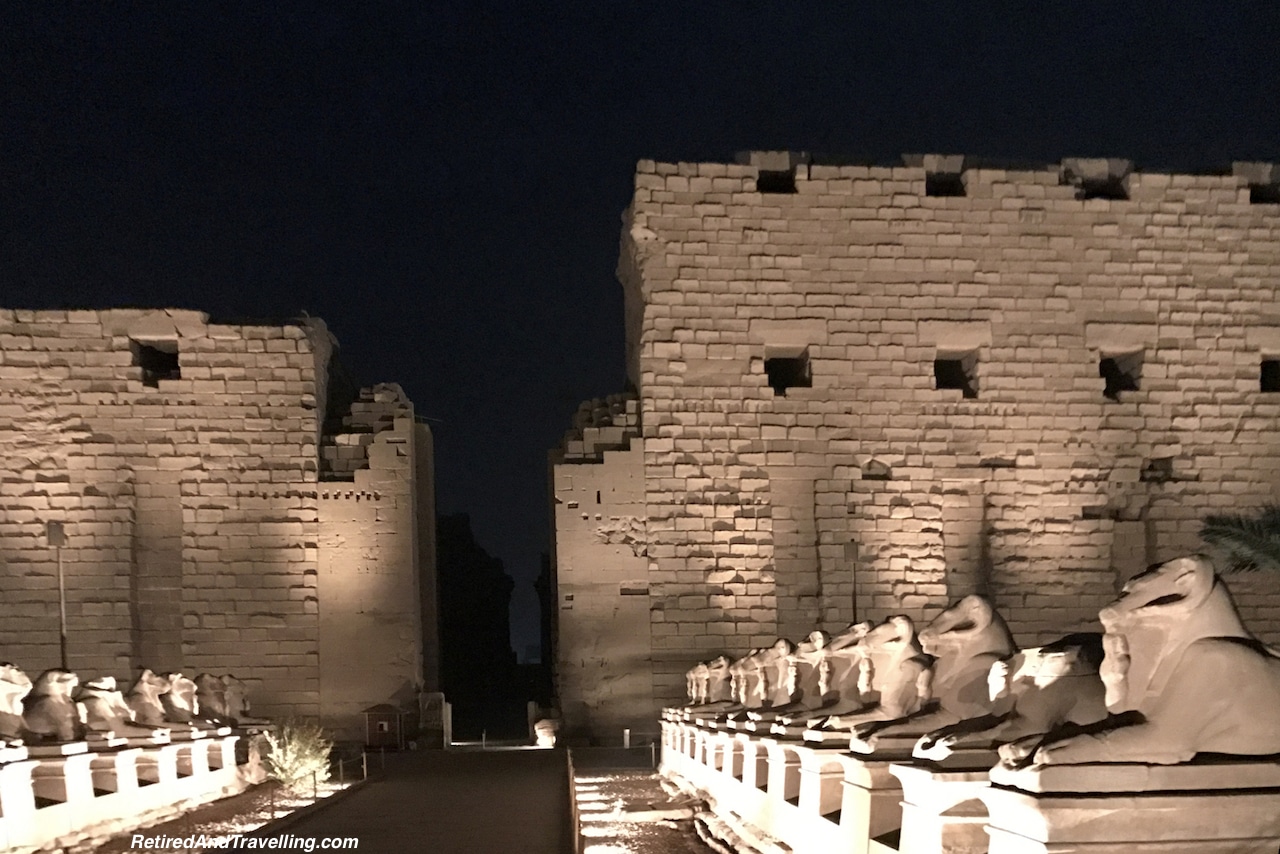 Below the ram head you could see a small statue of the god Amun-Ra. This use of small statues as part of larger ones would be seen over and over again as we toured the temples. 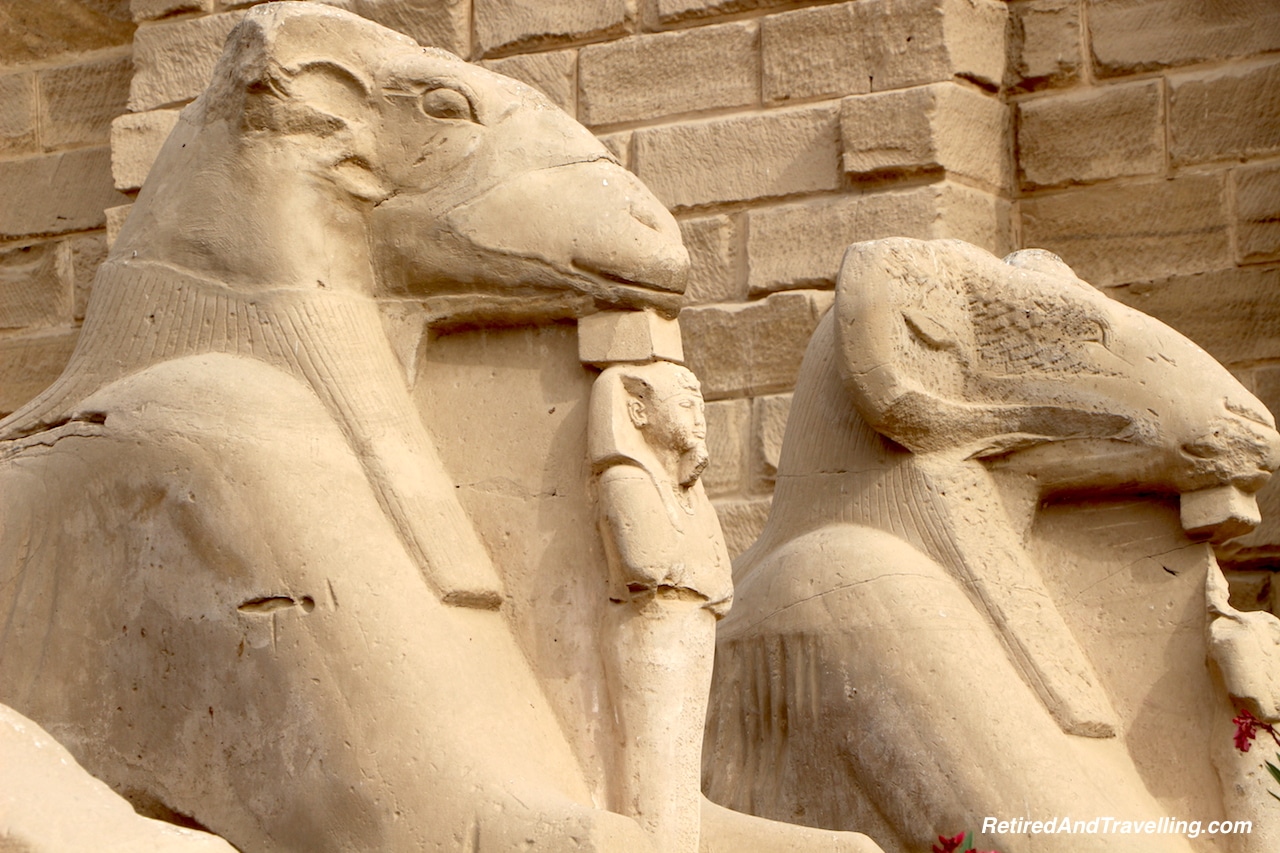 We found two huge statues of Ramses II guarding the entrance to the massive hypo-style hall. 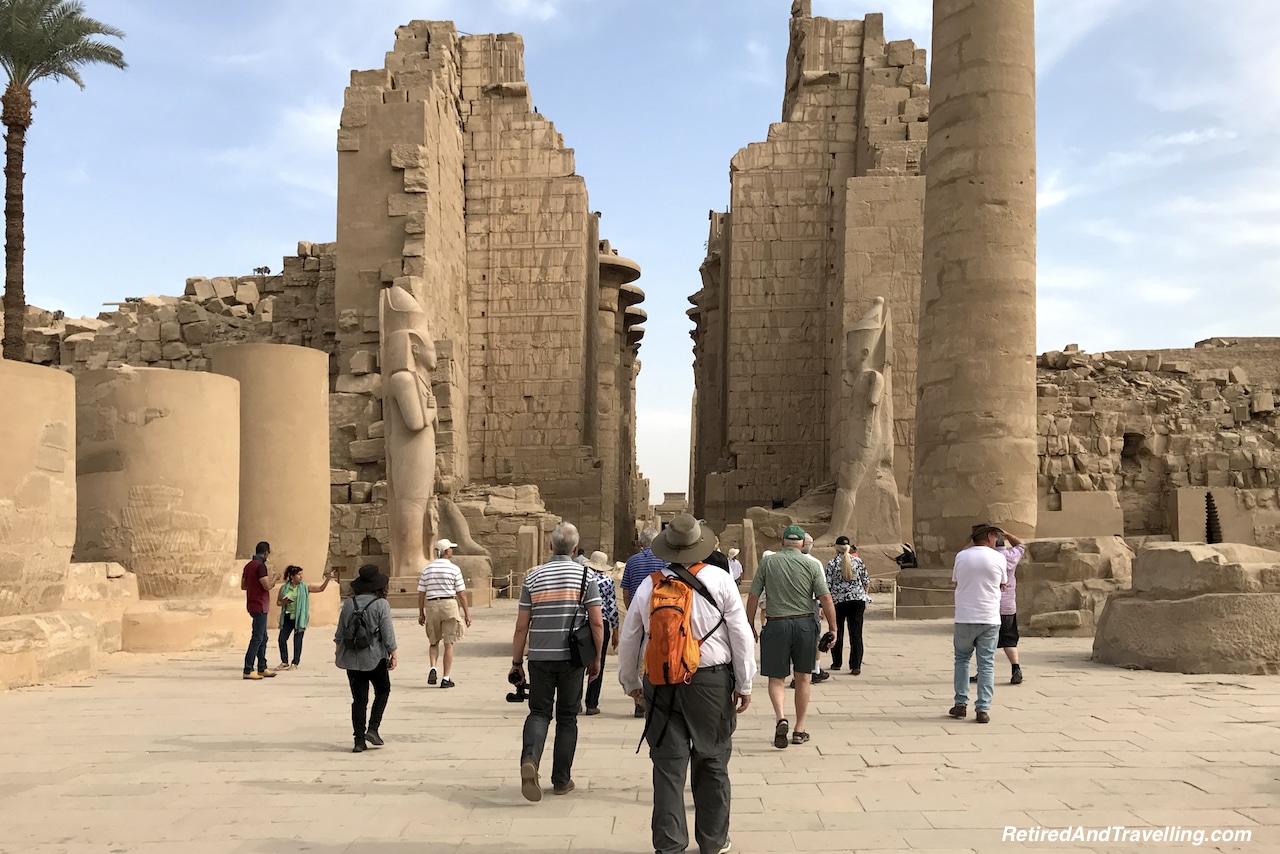 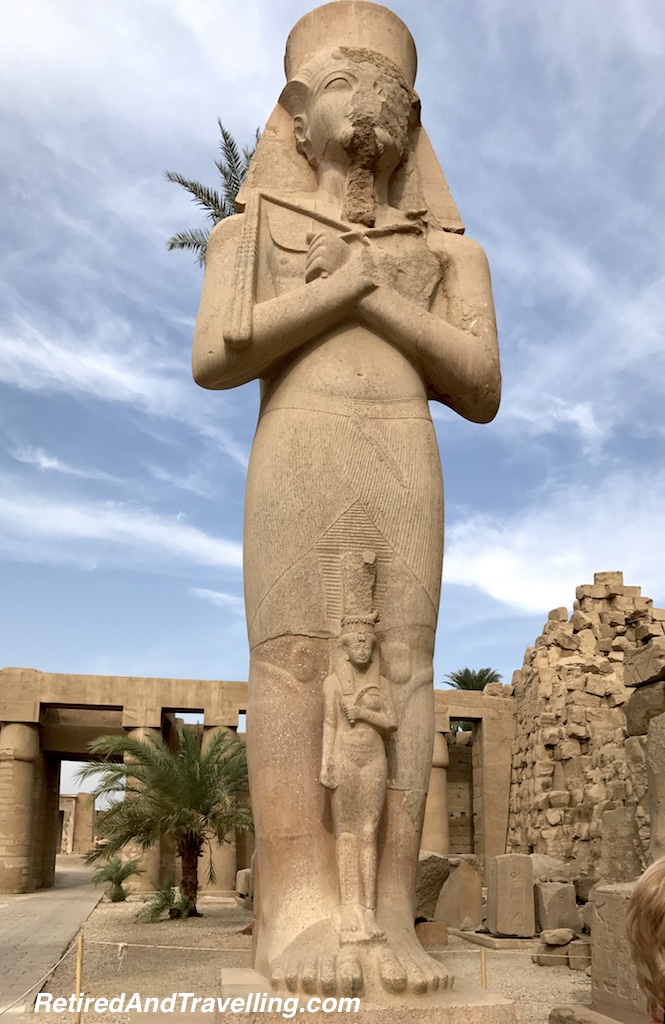 This large hypo-style hall is the largest hall of any temple in the world, spanning over 50,000 square feet. It contains over 134 massive columns representing the papyrus flower. 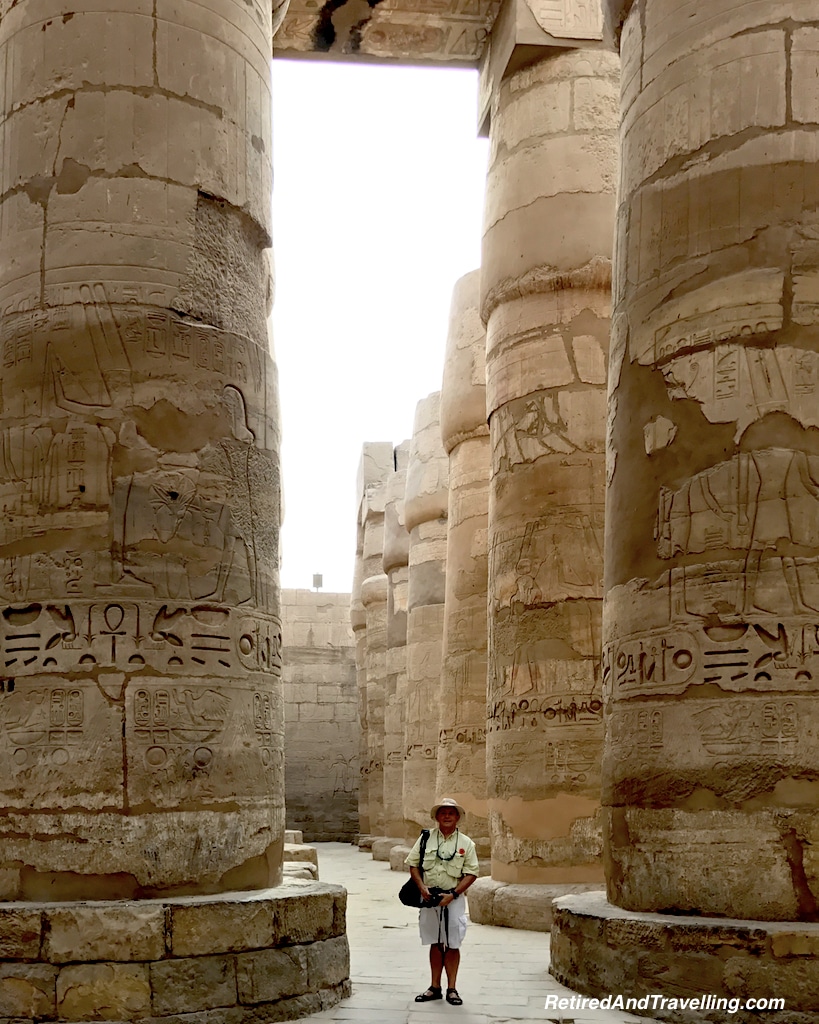 The columns were decorated with stories and hieroglyphics all the way to the top. 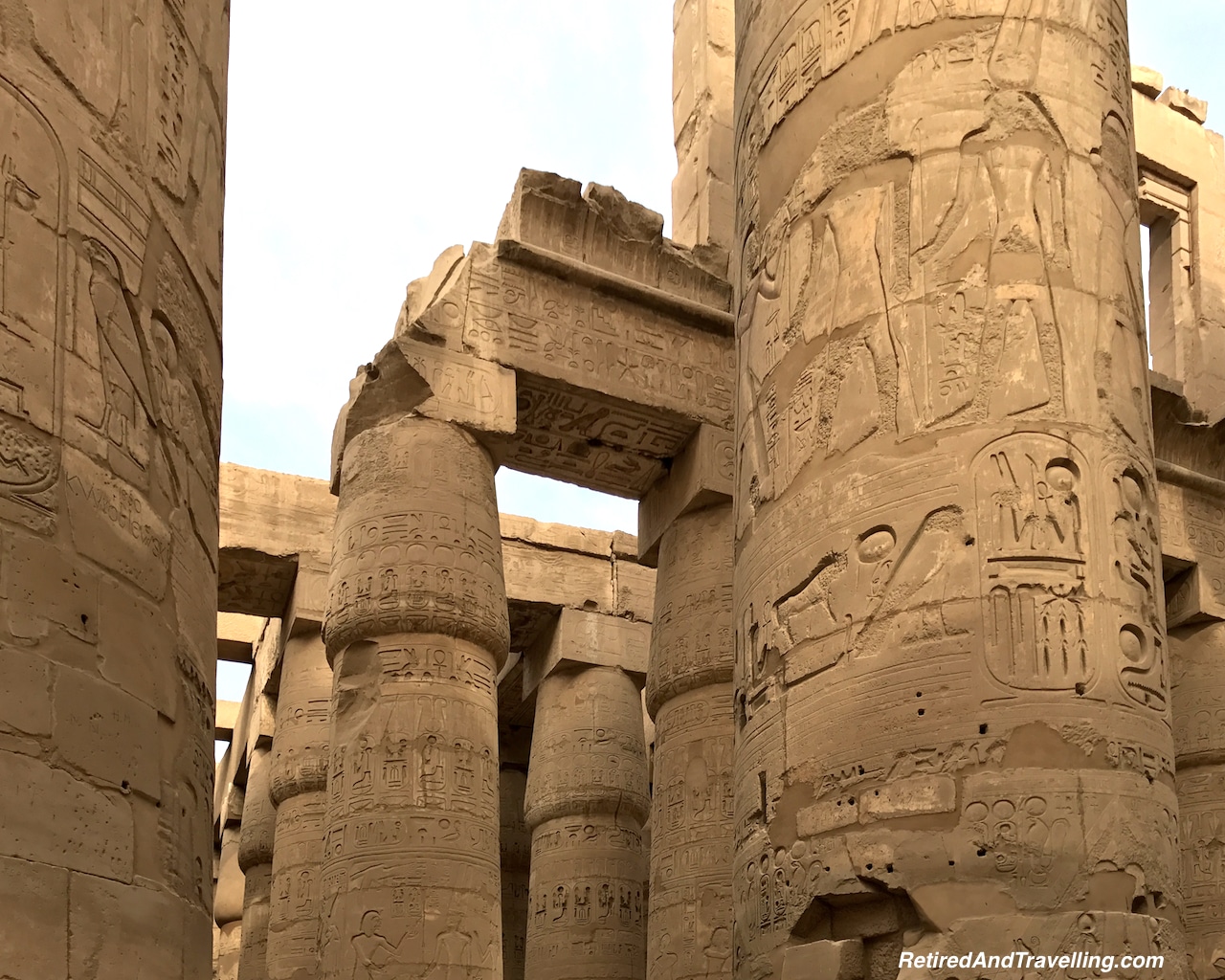 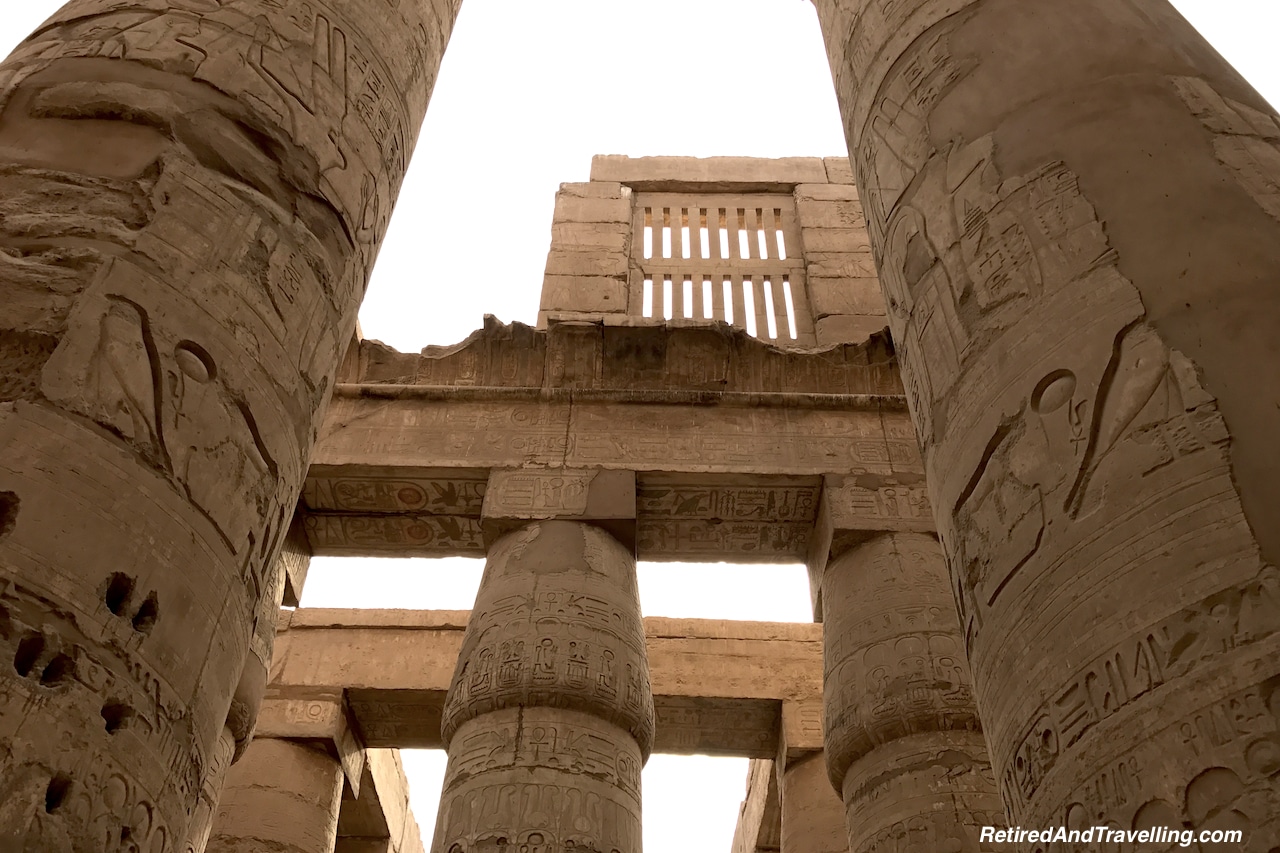 At night we got story images projected on the columns. 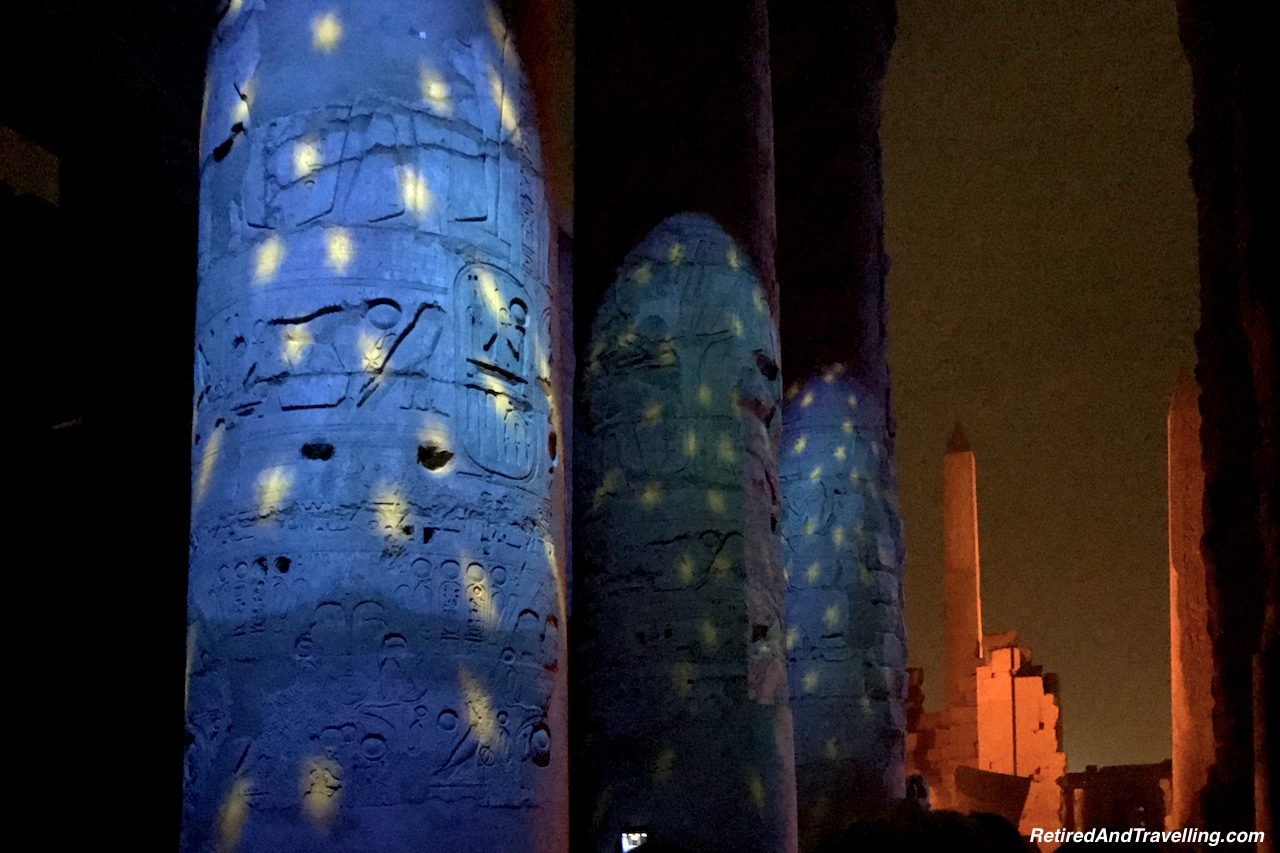 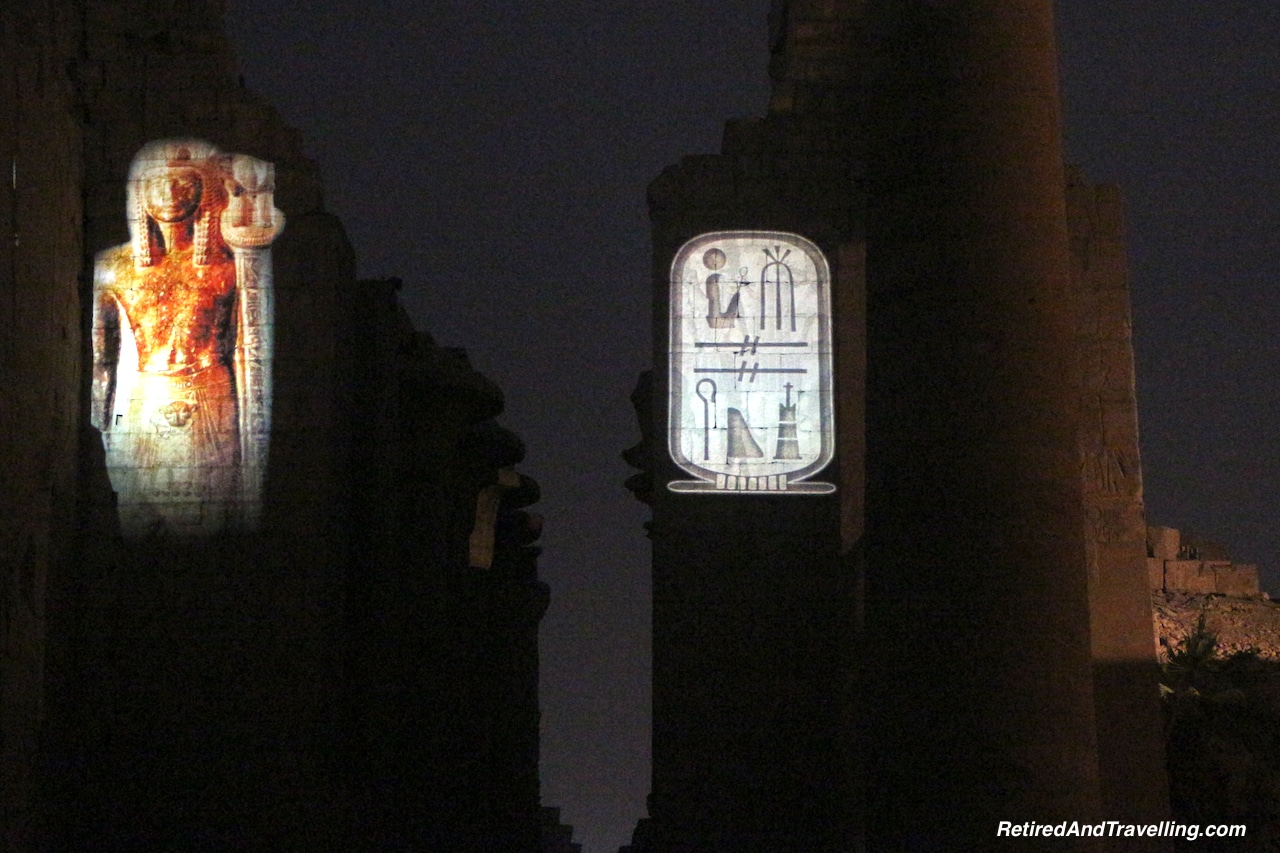 Coming towards the end of the hall, we got our first glimpse of the obelisk of Queen Hatshepsut. We were lucky to catch this view in the Karnak Temple day and night. This 97 foot high obelisk is carved in one piece of solid pink granite. 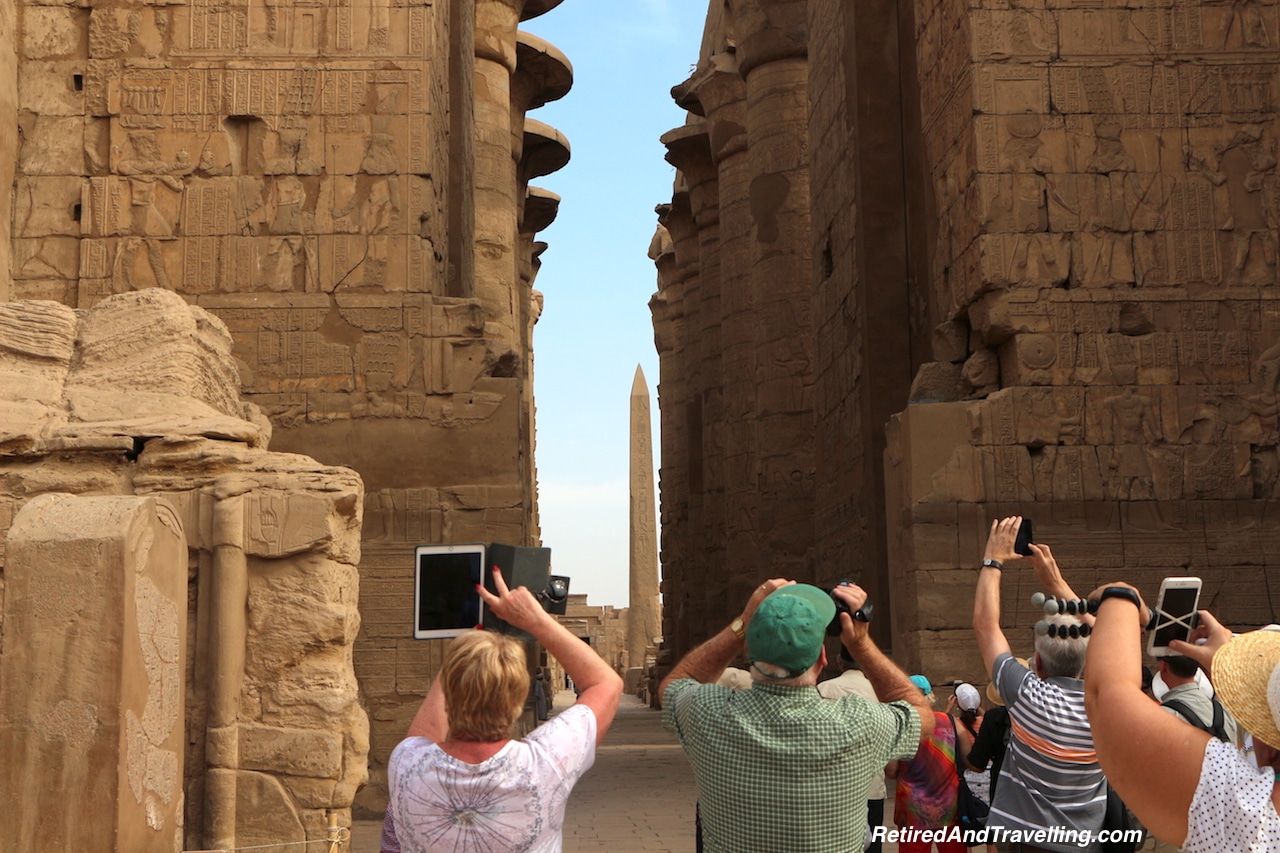 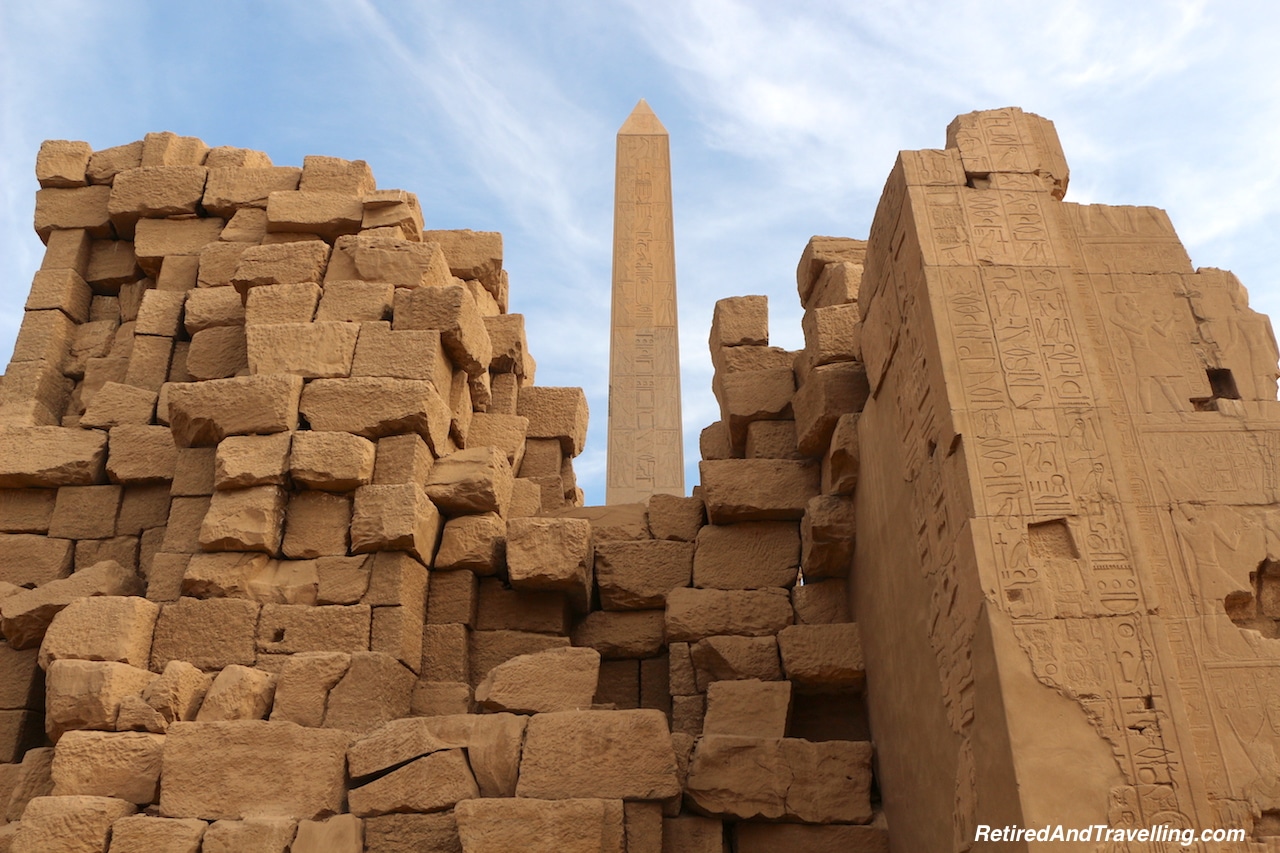 The smaller obelisk (65’) still standing is one put up for Thutmosis I. 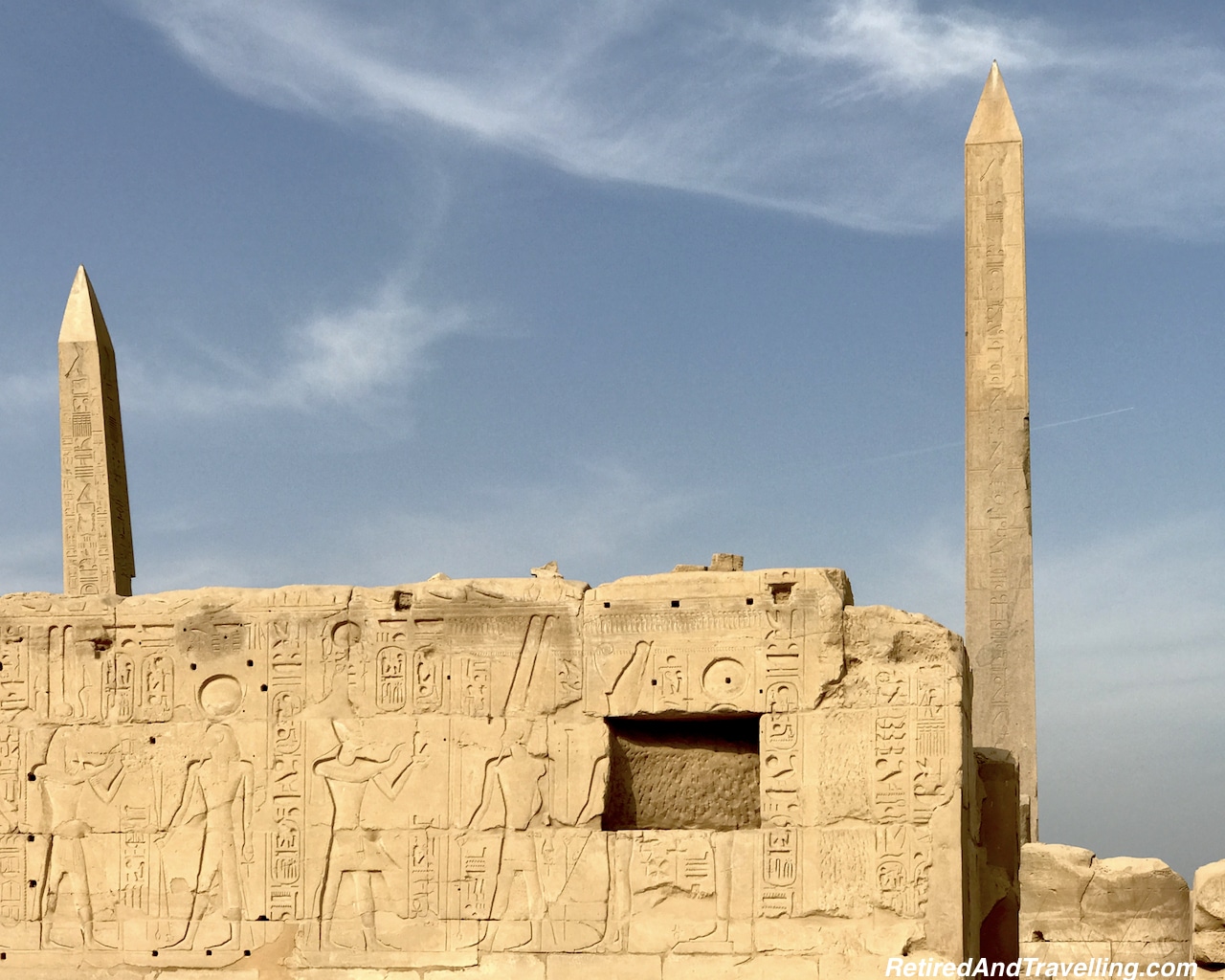 The twin to Queen Hatshepsut’s obelisk is now lying on its side. The hieroglyphics are in great shape and you can see them all the way to the top of the obelisk. 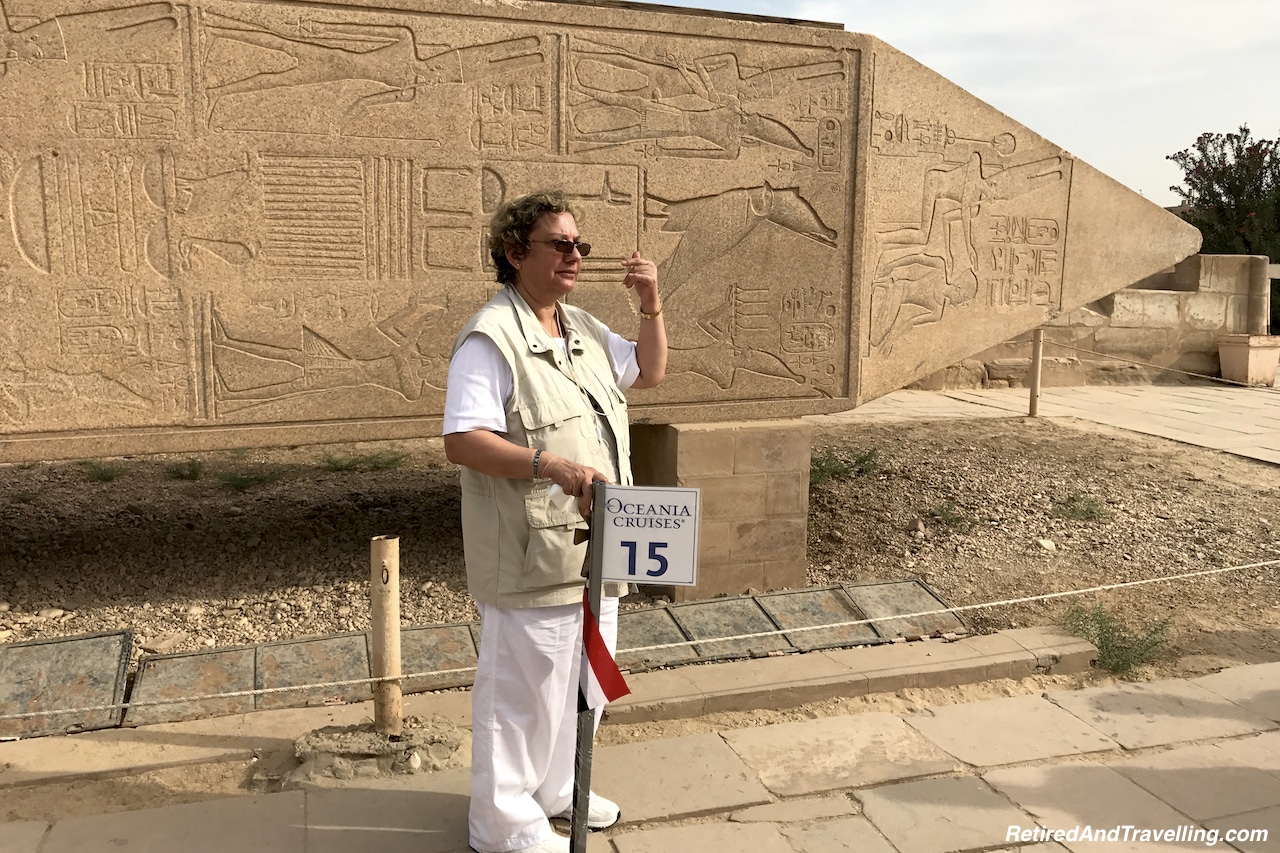 At the far end we found the sacred lake where ceremonial boats took part in the worship of Amun. During the day it was a calm, tree lined sight.

When we came back at night, we were seated in the amphitheatre at one end of the lake. We were treated to a narrated story that lit up the temple site. Story images were projected on the buildings and reflected in the lake. 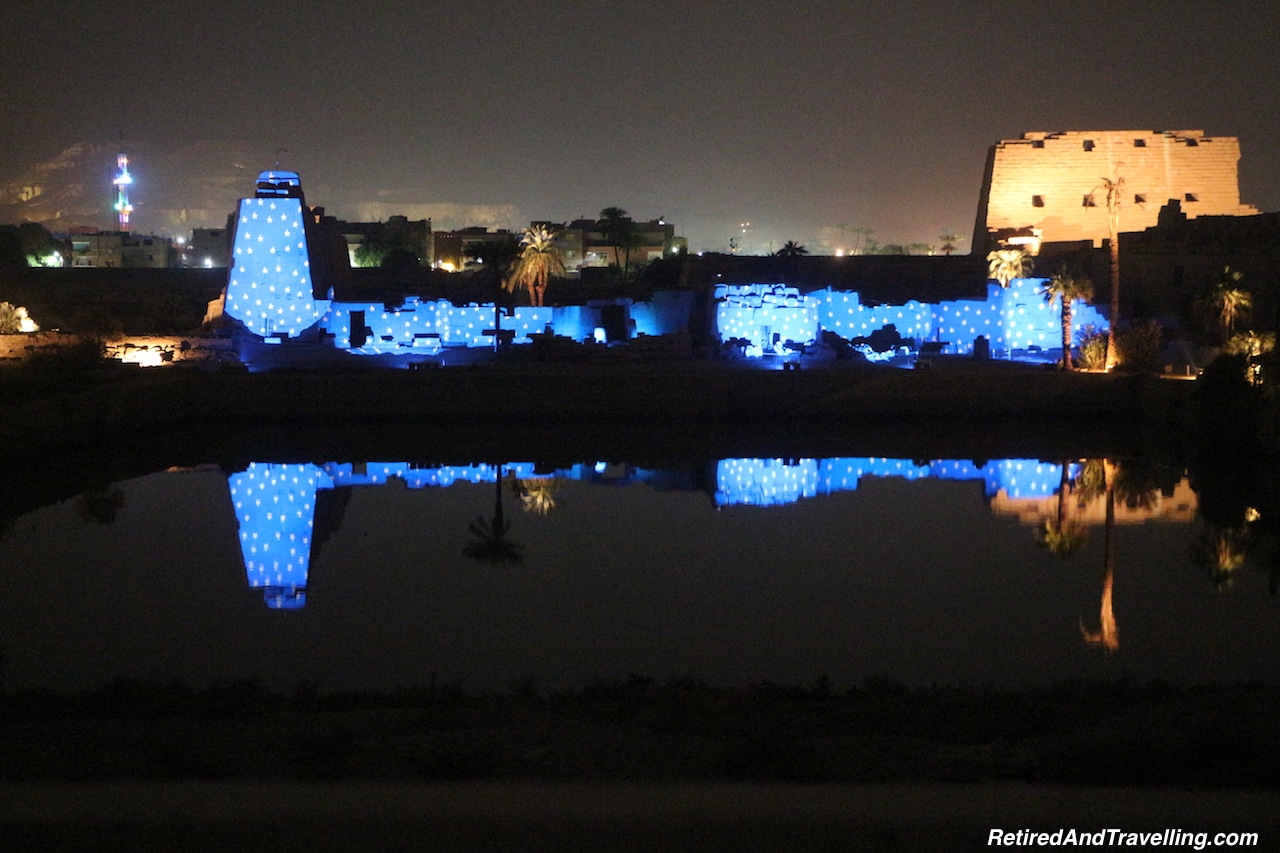 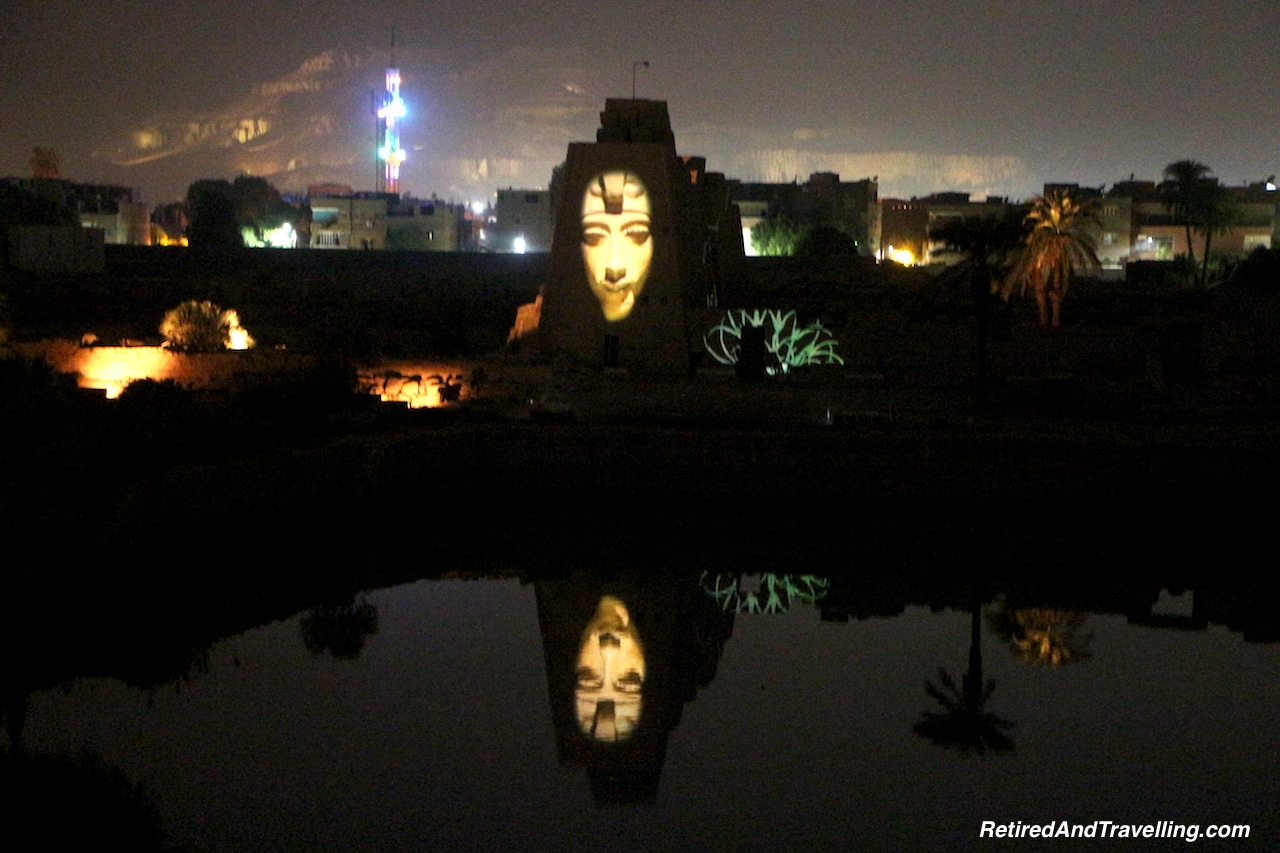 While we toured the Karnak temple day and night, we were amazed at how well preserved much of the hieroglyphics were. The told a continuous tale on almost every surface. 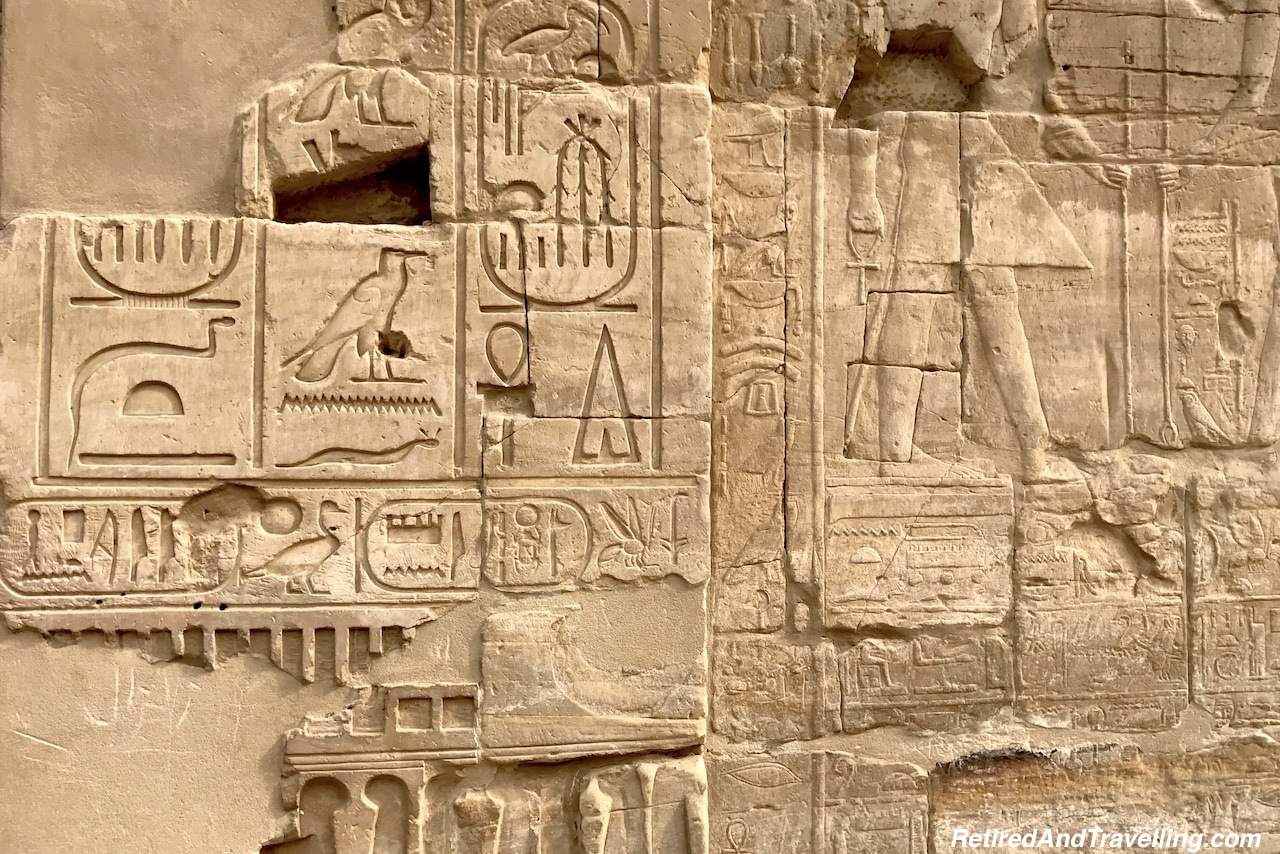 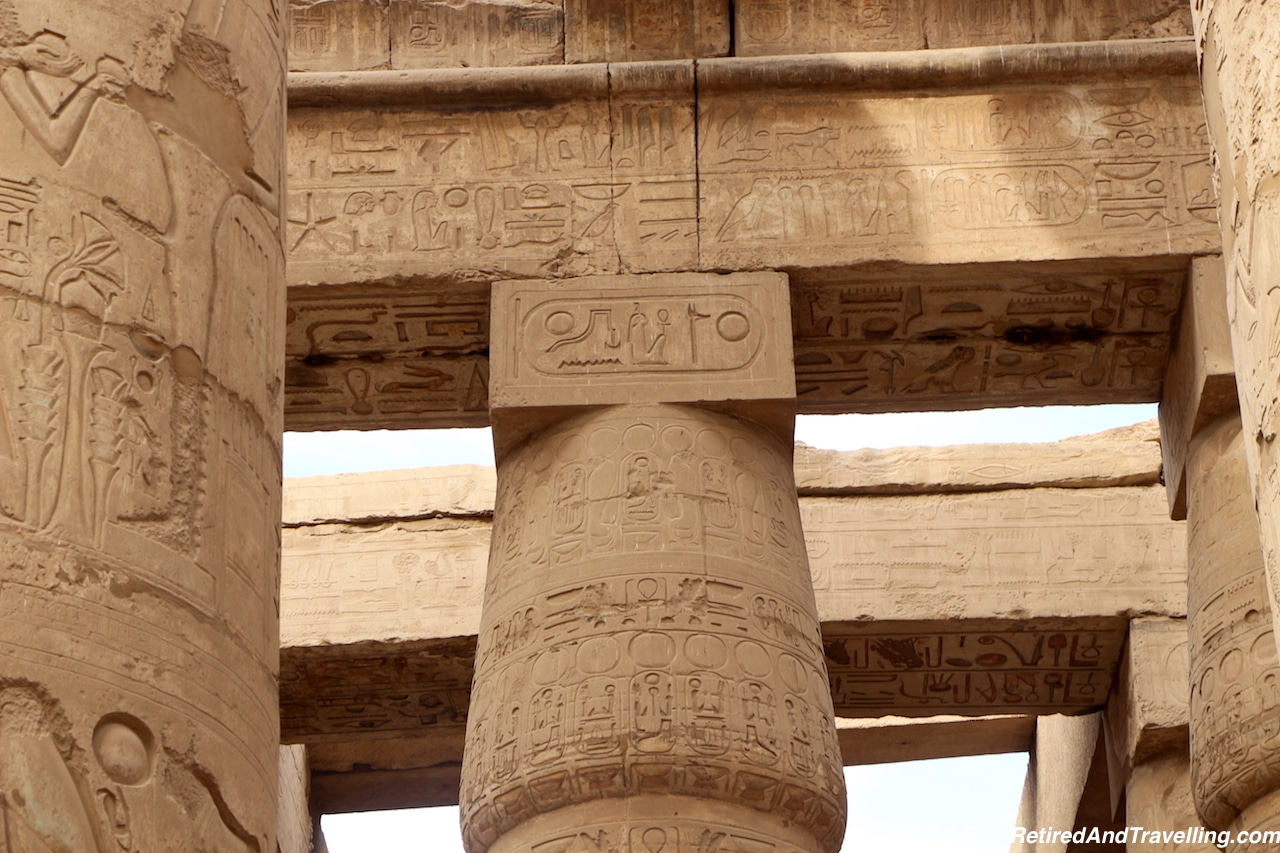 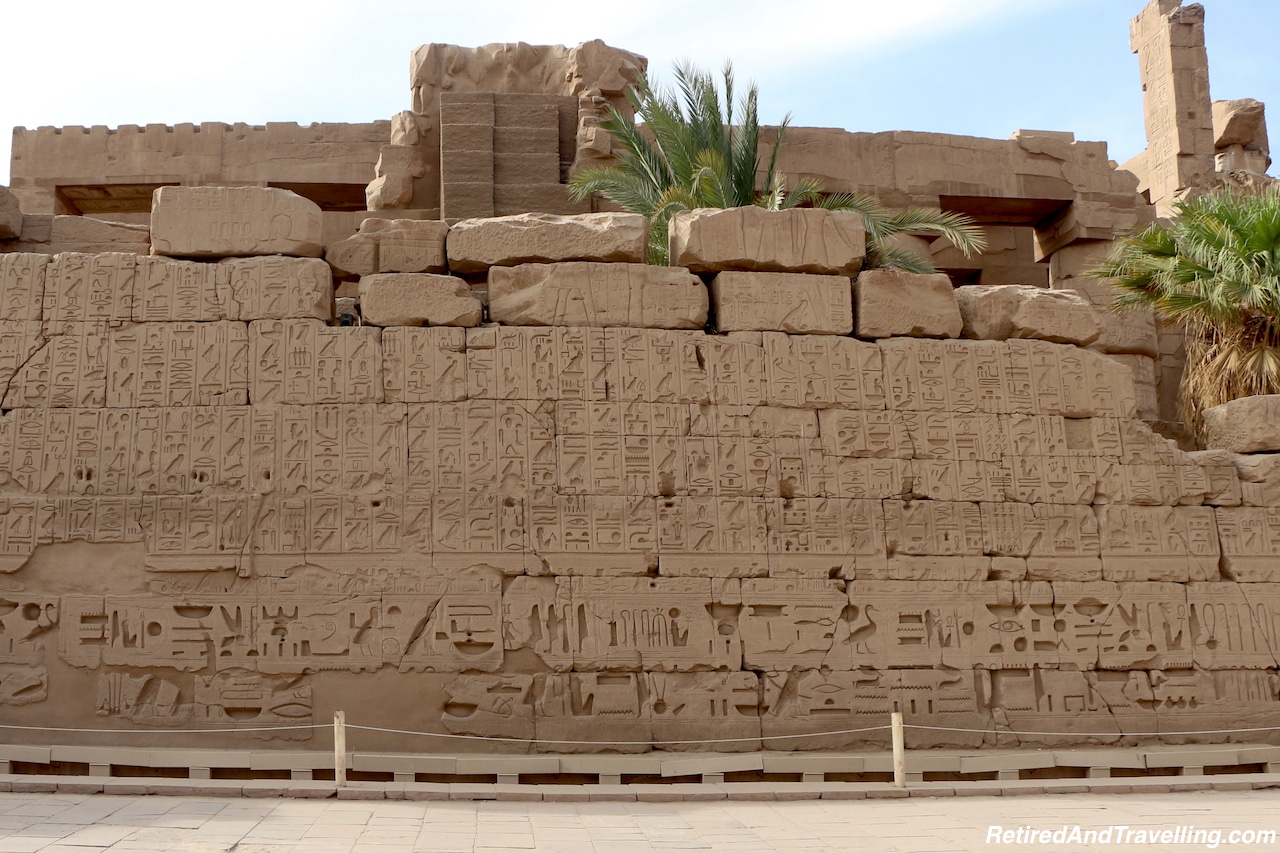 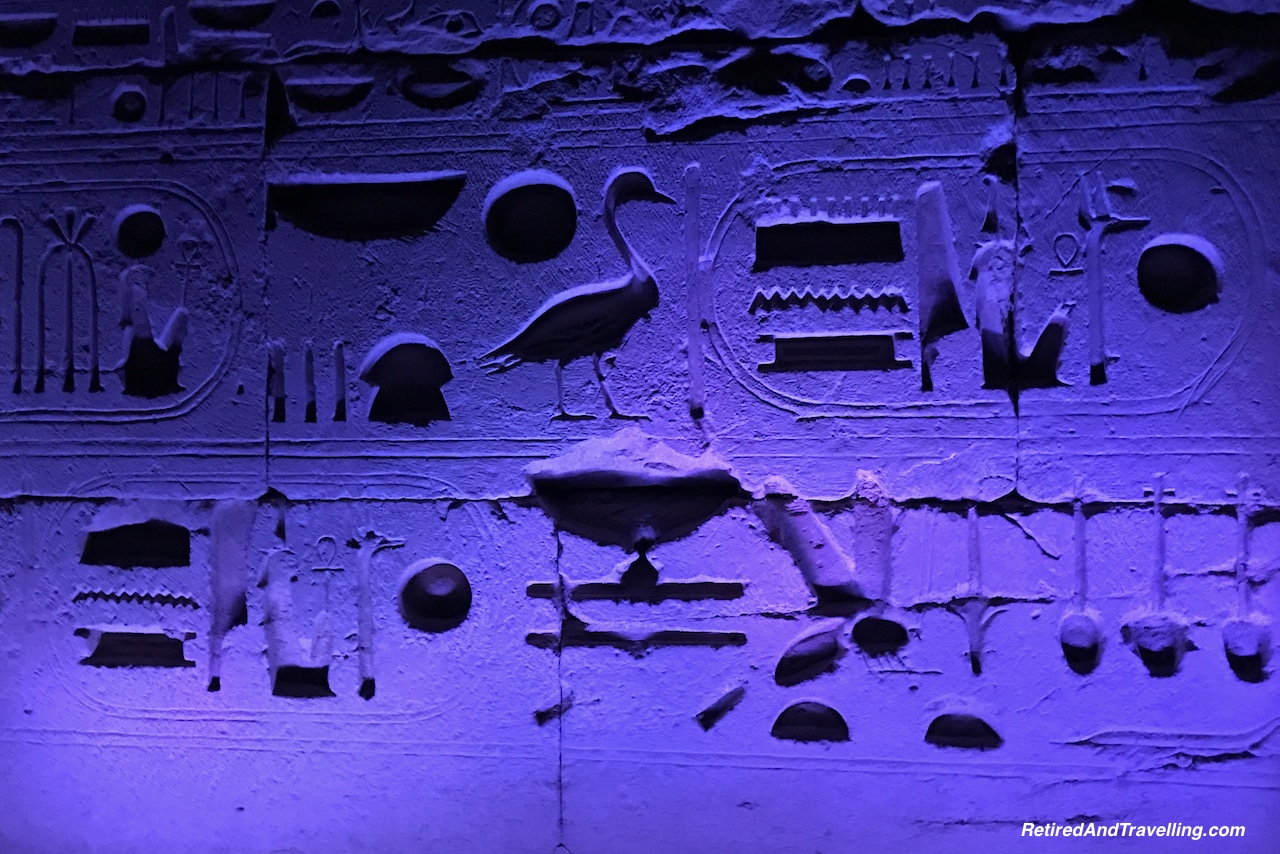 The hieroglyphics were augmented by story walls that told the tales of the ancient Egyptians.

Karnak is an outdoor site, open to the elements. Much of the colour has been bleached out over the years. But every now and then we got surprised by remnants of what must have been brilliant colours. 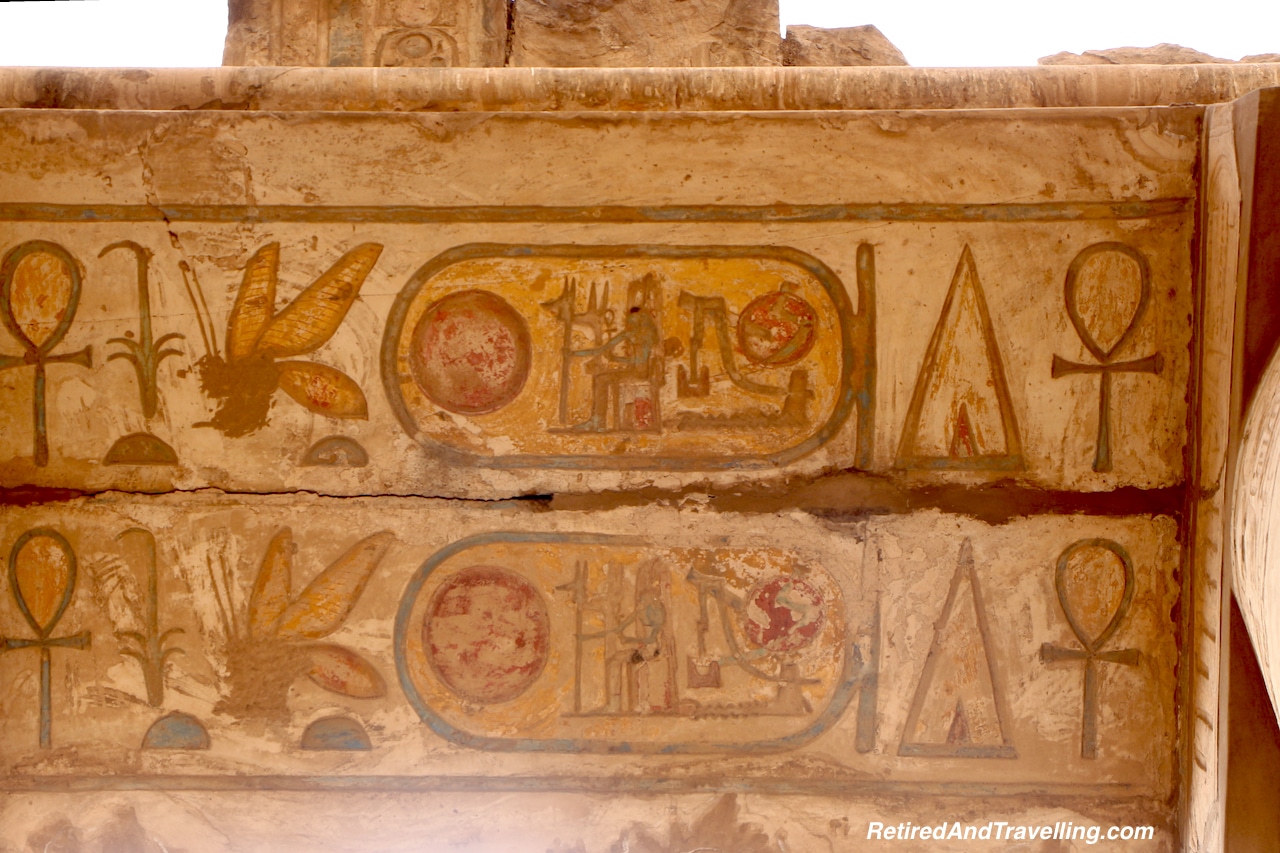 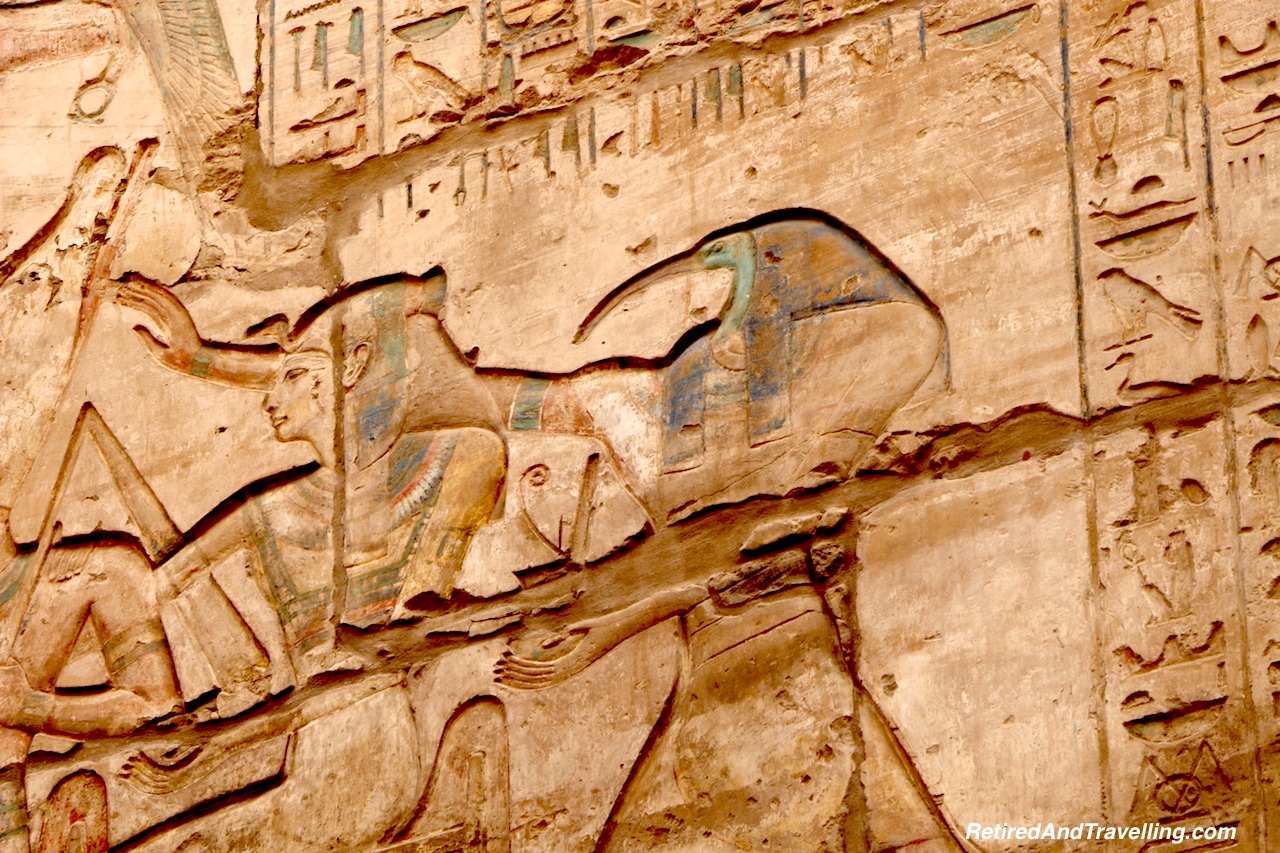 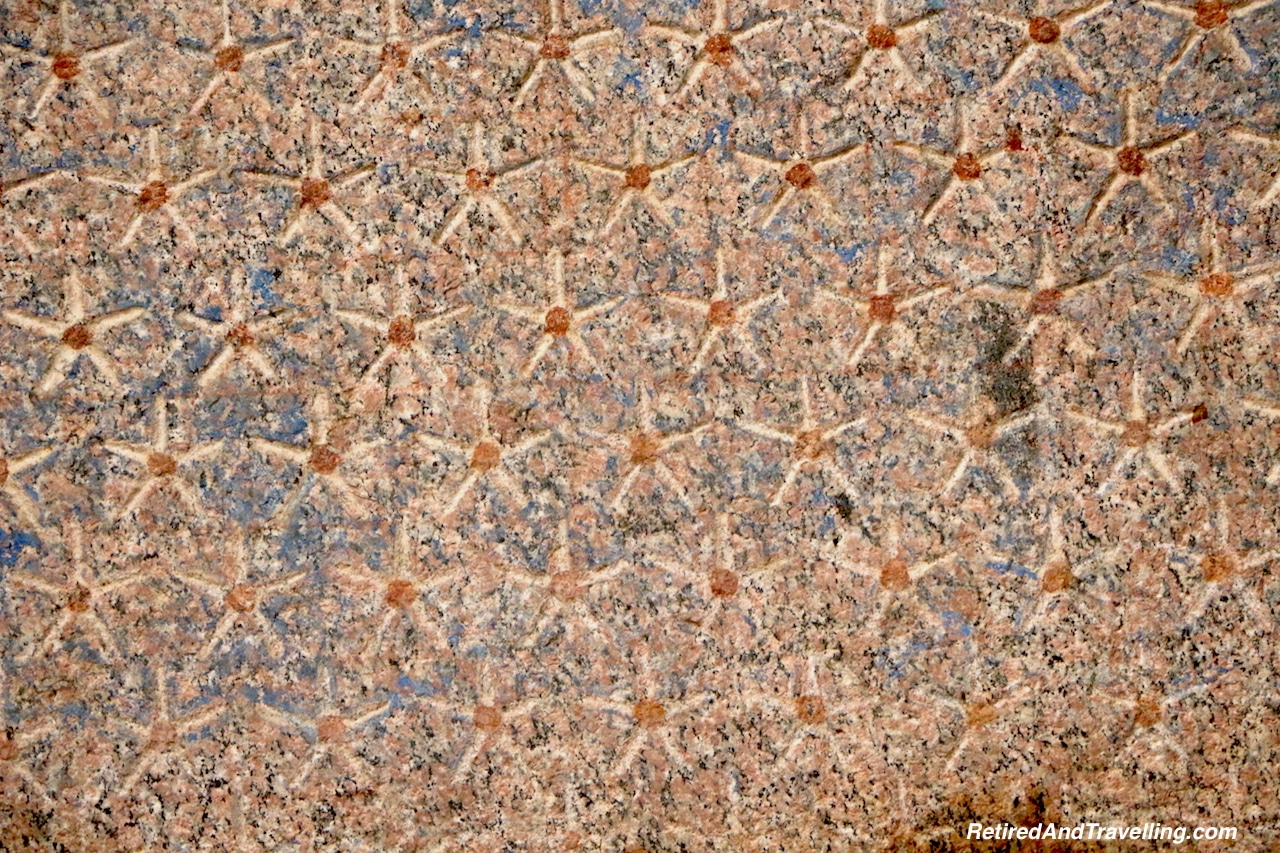 When we later visited the Valley of the Kings, we would find that the outer areas of the tombs were also bleached of much of their colour. Most of the tombs have been open to the air for some time. Going deeper into the tombs often gave us a much more colourful view. The tomb of Tutankhamen when discovered had never been opened. It provided a great view of colour and was filled with magnificent treasures.

It was great to visit this massive sight both during the day and again at night. We have often found that day and night visits offer different perspectives on a site. In this case, we got some additional insight and a magical light show.  The Luxor Temple visit gave us yet a different perspective on these massive temple for the pharaohs.

If you have a chance to visit the Luxor area, make sure that Karnak is on your plans. We almost bypassed the temples to visit only the tombs in the Valley of the Kings. That would have been such a mistake! Visiting Karnak Temple day and night will add a little extra to your visit if you are staying in Luxor overnight.

Did you visit Karnak day and night? What was your favourite site in the massive temple?

Things To See And Do On A Day In Edinburgh

A Quick Visit To Edinburgh The first port on the second leg of our cruise through the Nordic countries was in Edinburgh. This was our first visit to Scotland and we were excited to spend […]

We would love if you could share this!
59
59
Shares