After we wandered around the port town, we visited Bluff Cove Lagoon for penguins in Stanley in the Falkland Islands. Penguins were definitely an exciting part of our Oceania Cruises trip around South America.

On our travels we found penguins around the world. We were surprised when we saw African Penguins outside of Cape Town in South America at the Boulder Penguin Colony. At visits to the Osaka Kaiyukan Aquarium in Japan and several times to the Monterey Aquarium in California, we always made sure we visited the penguins. So we grabbed at any chance to see more penguins!

Our ship arrived in the Falkland Islands a bit late in penguin season. But we were delighted when we saw so many Gentoo Penguins. And even saw the King Penguins.

We enjoyed the morning on wandering in the town of Stanley. We learned quite a bit about this interesting point out at sea. When it was time for our penguin excursions, we headed back to the dock area and met our group.

Heading Out To Find Penguins

When we arrived at a parking lot at Bluff Cove Lagoon, we were transferred to small Land Rover jeeps in groups of four. There was a new rough stone road being created for the jeeps. But when the road ran out, we moved off-road. It was not the wild off-road jeep ride we had on our visit to Moab in Utah or our desert jeep adventure in Dubai. But it was still fun. 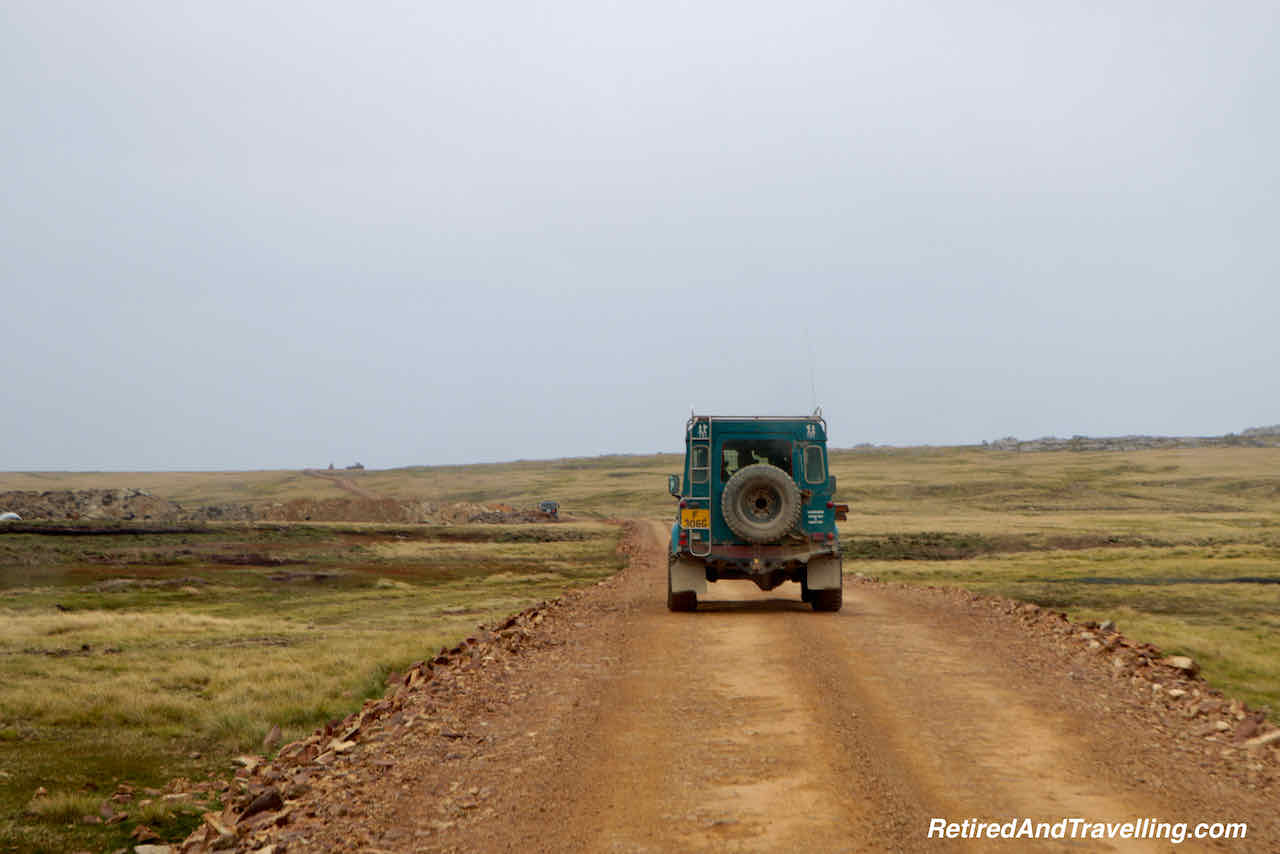 When we reached Bluff Cove Lagoon there was a short briefing about what we would see as we walked. We were told to stay inside the path marked with white triangles. And sent off to visit with the penguins for an hour. It did not take us long to realize how little time that was!

The First View Of Gentoo Penguins

Our first view was of a large field of moulting Gentoo Penguins. The ground was littered with shedded feathers and penguin poop. 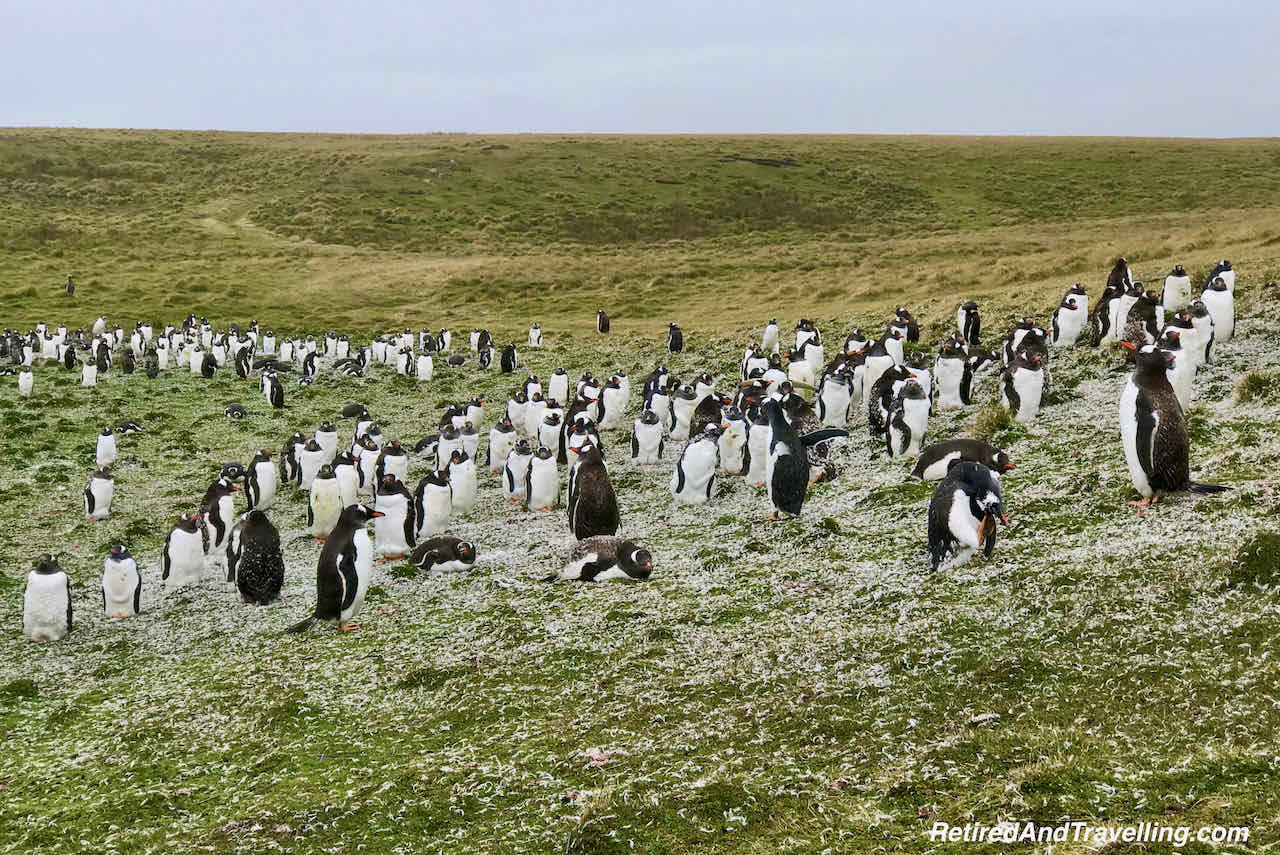 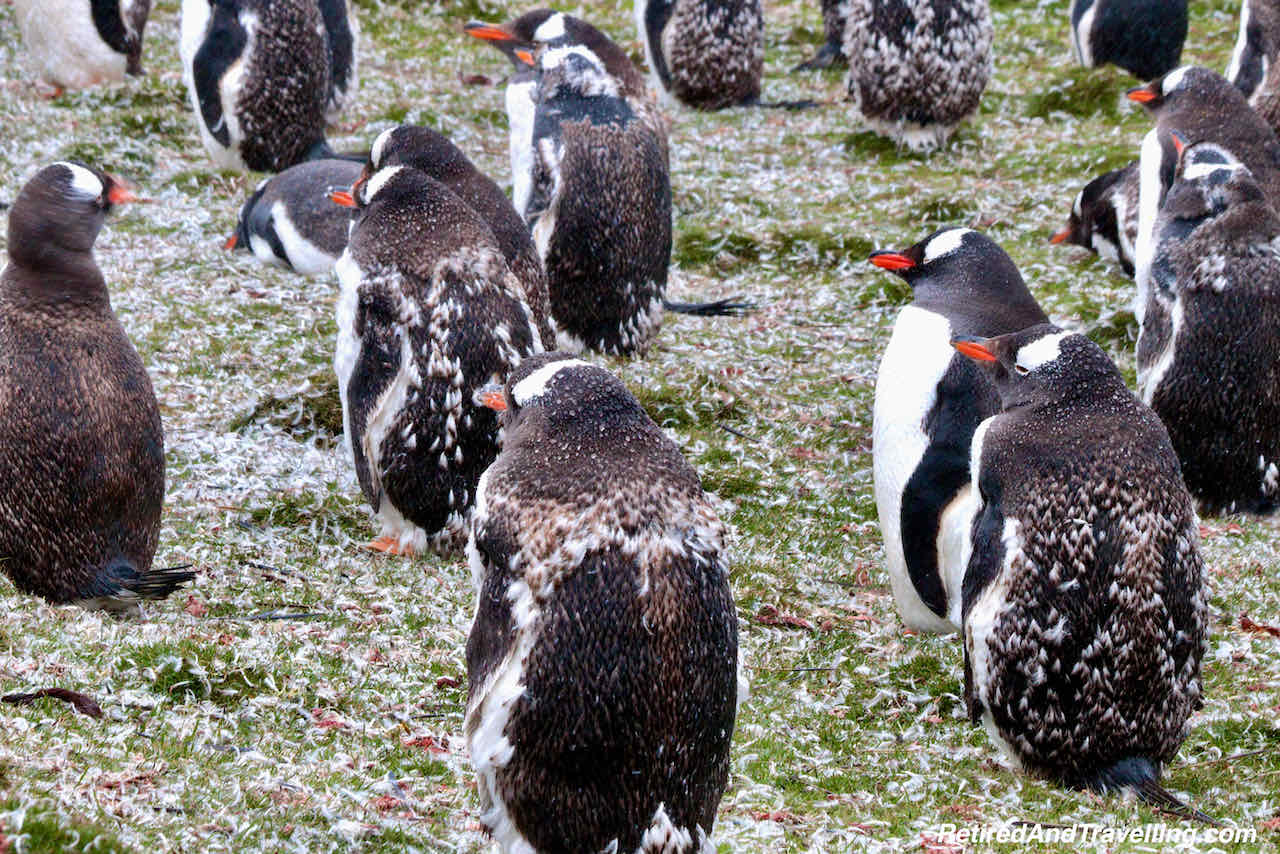 When we stopped and looked at the penguins, they soon wandered over and checked us out. Some crept up slowly. But others ran in their funny waddling way. They seemed very inquisitive about us tourists. 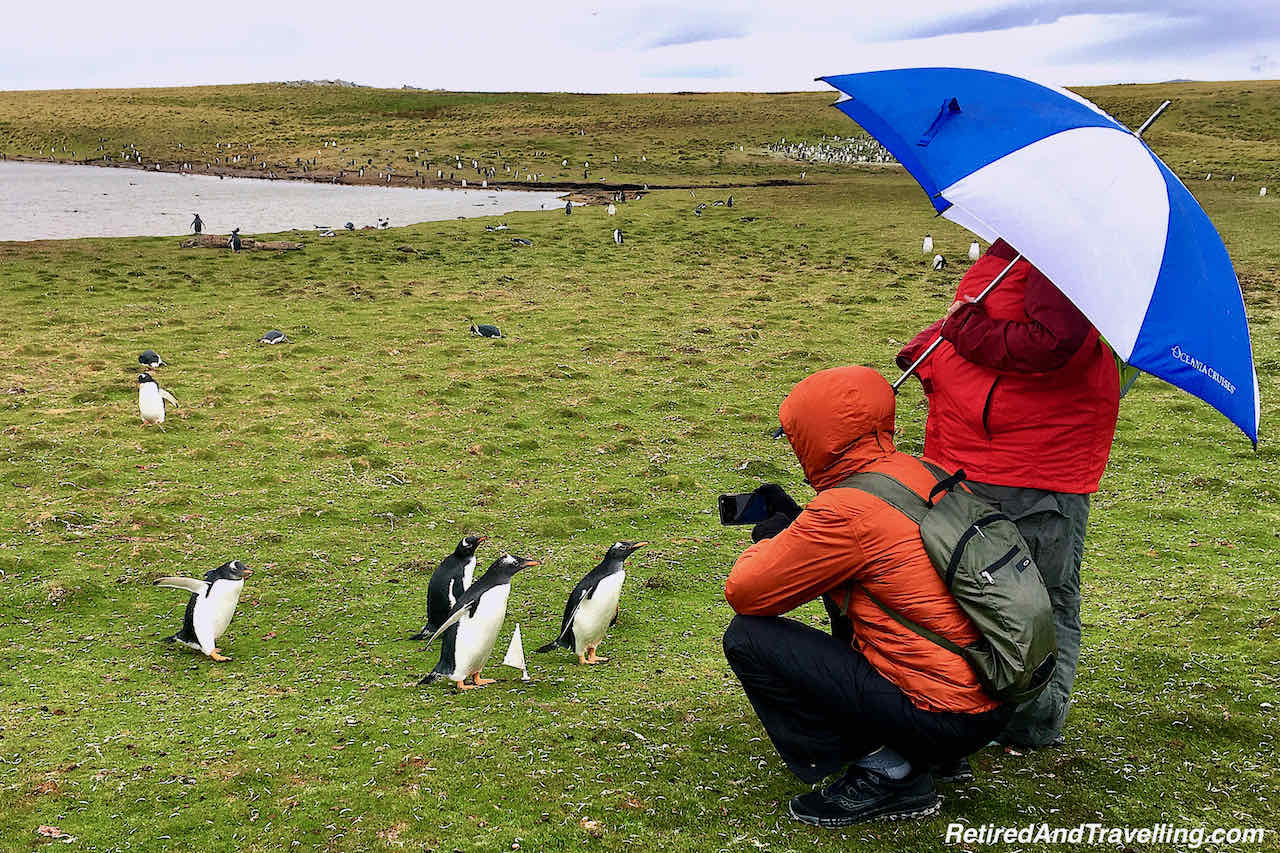 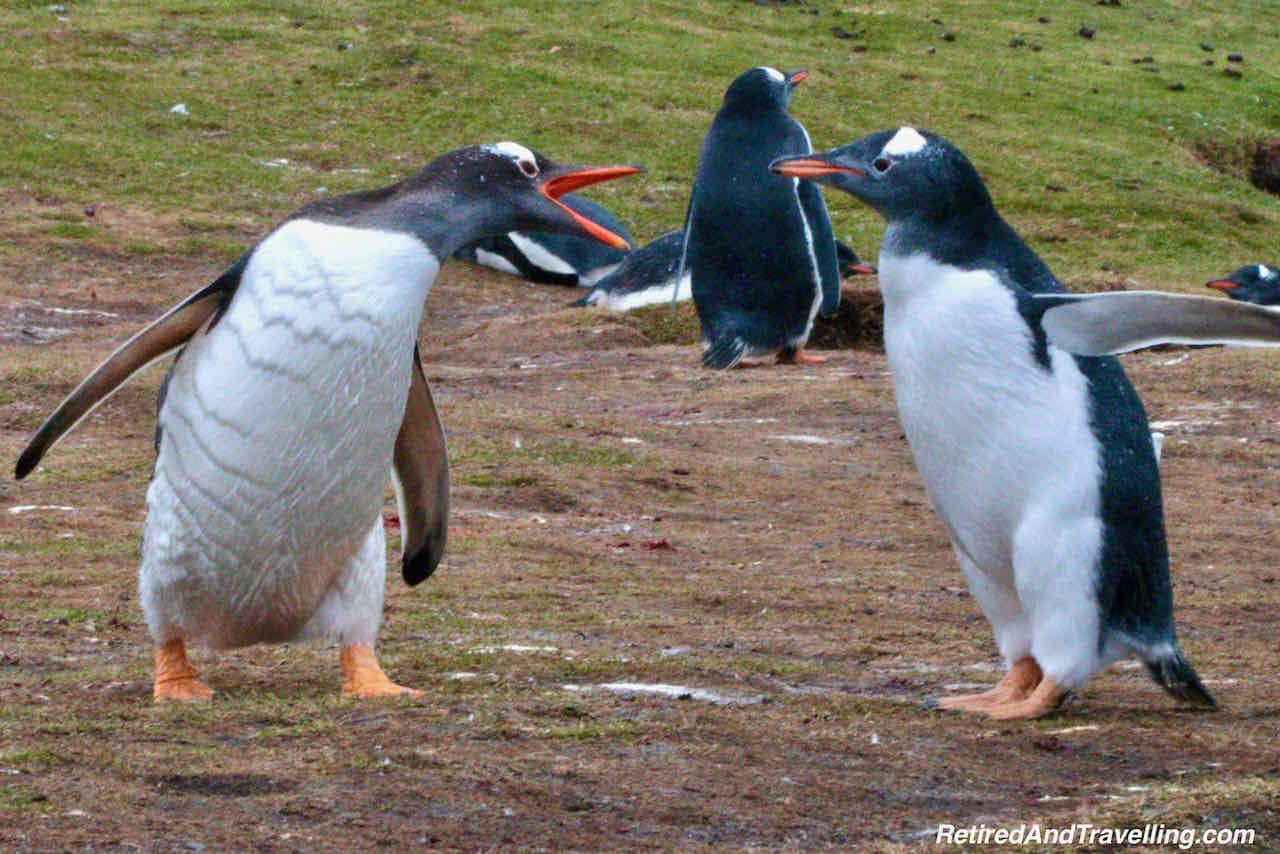 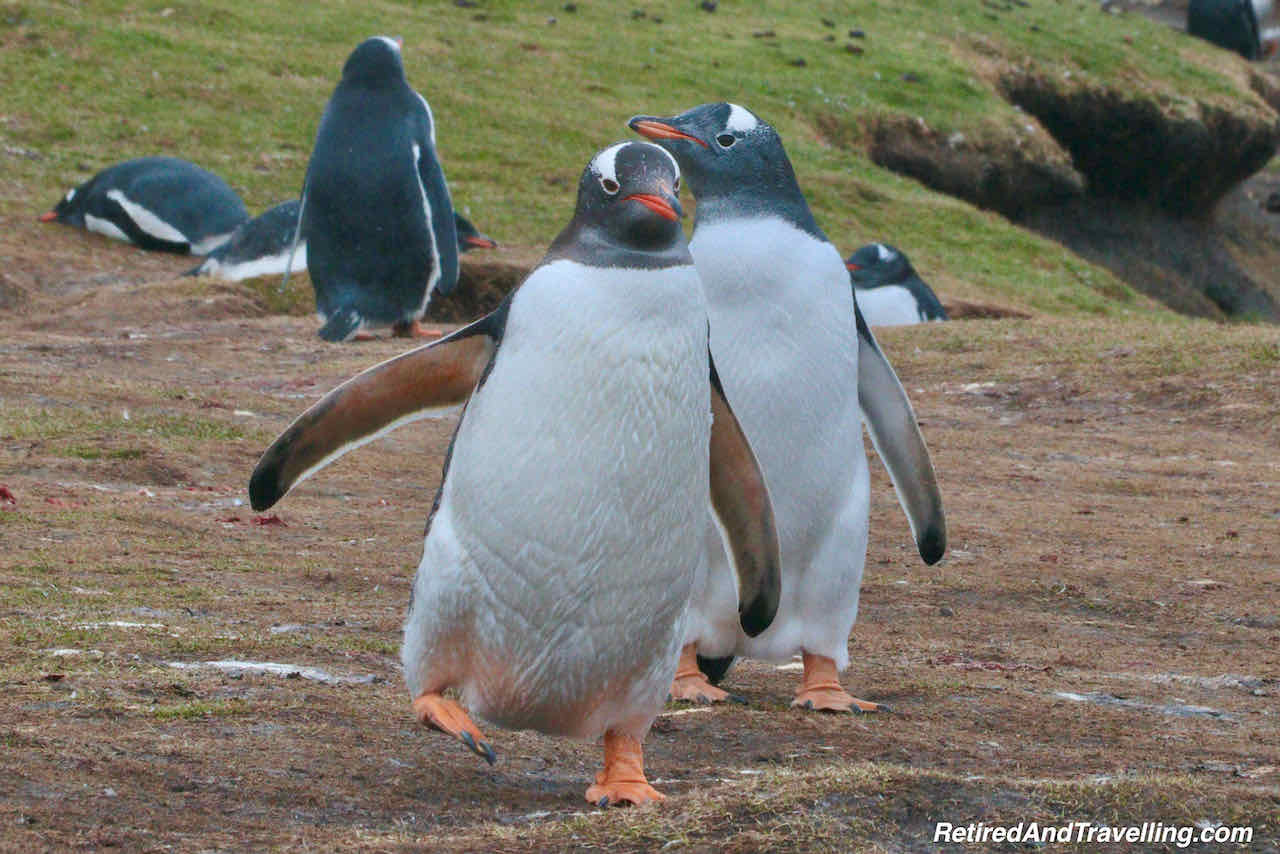 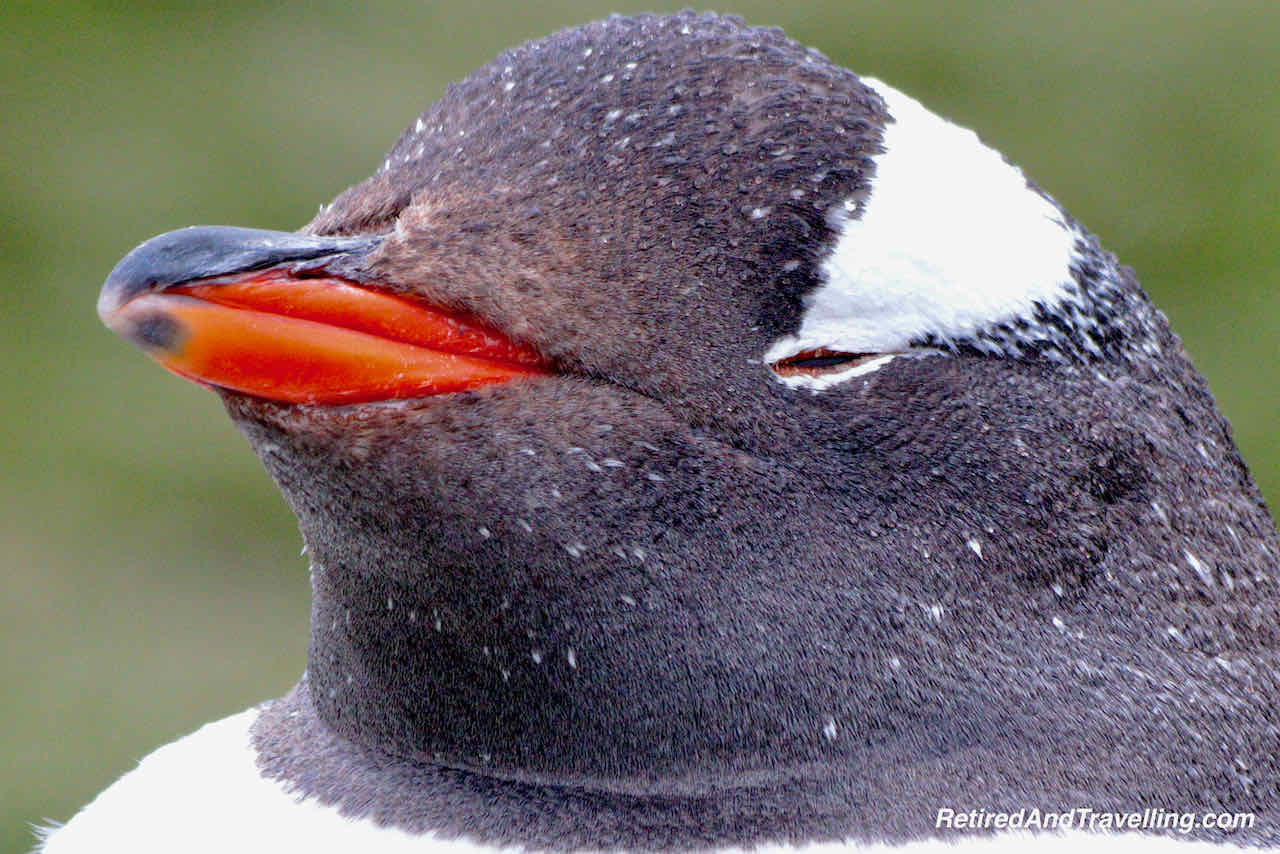 We moved from group to group of penguins. They were a fun start on our day to visit Bluff Cove Lagoon for penguins in Stanley.

King Penguins And Their Babies

When we booked our tour, we knew we would see the Gentoo Penguins. But we were delighted when we were told that there was a group of King Penguins at the site. The group all sat in one area. 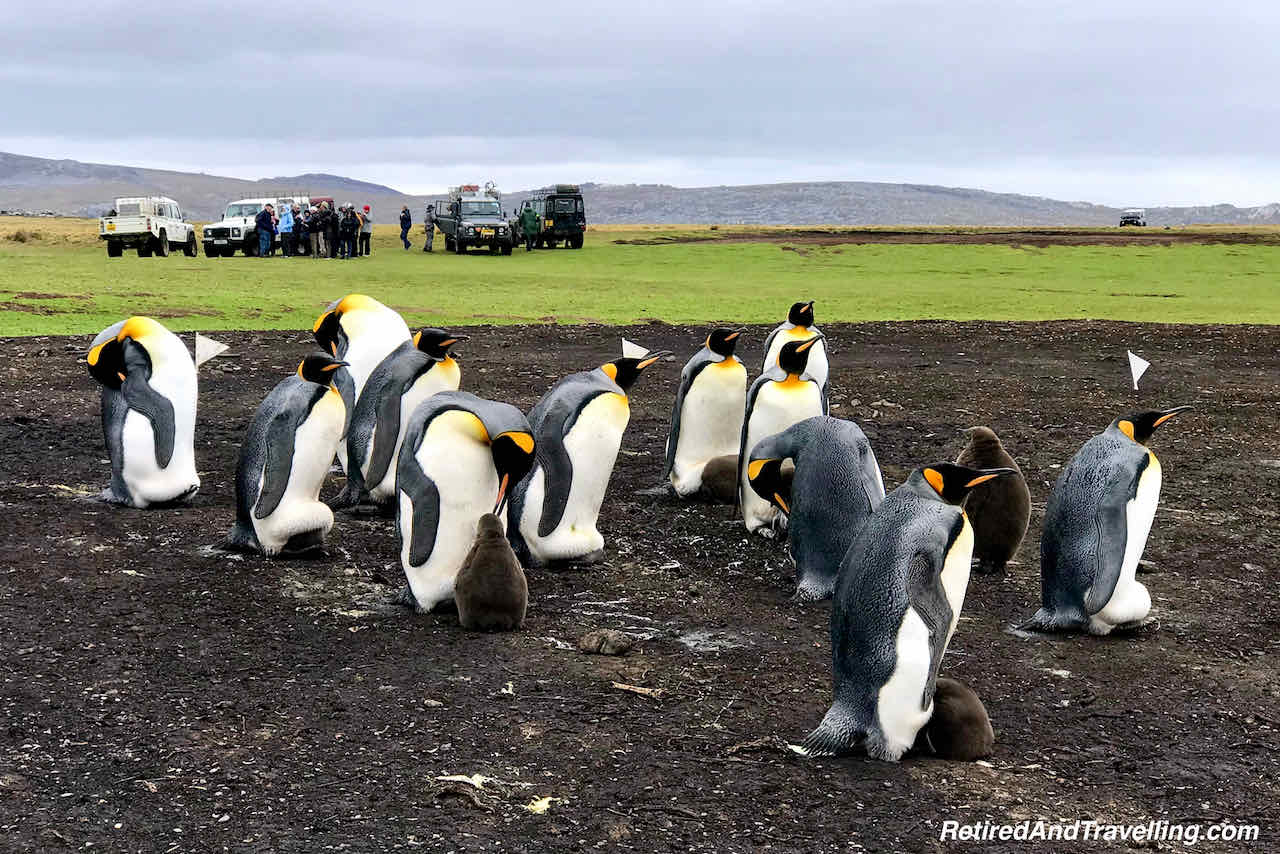 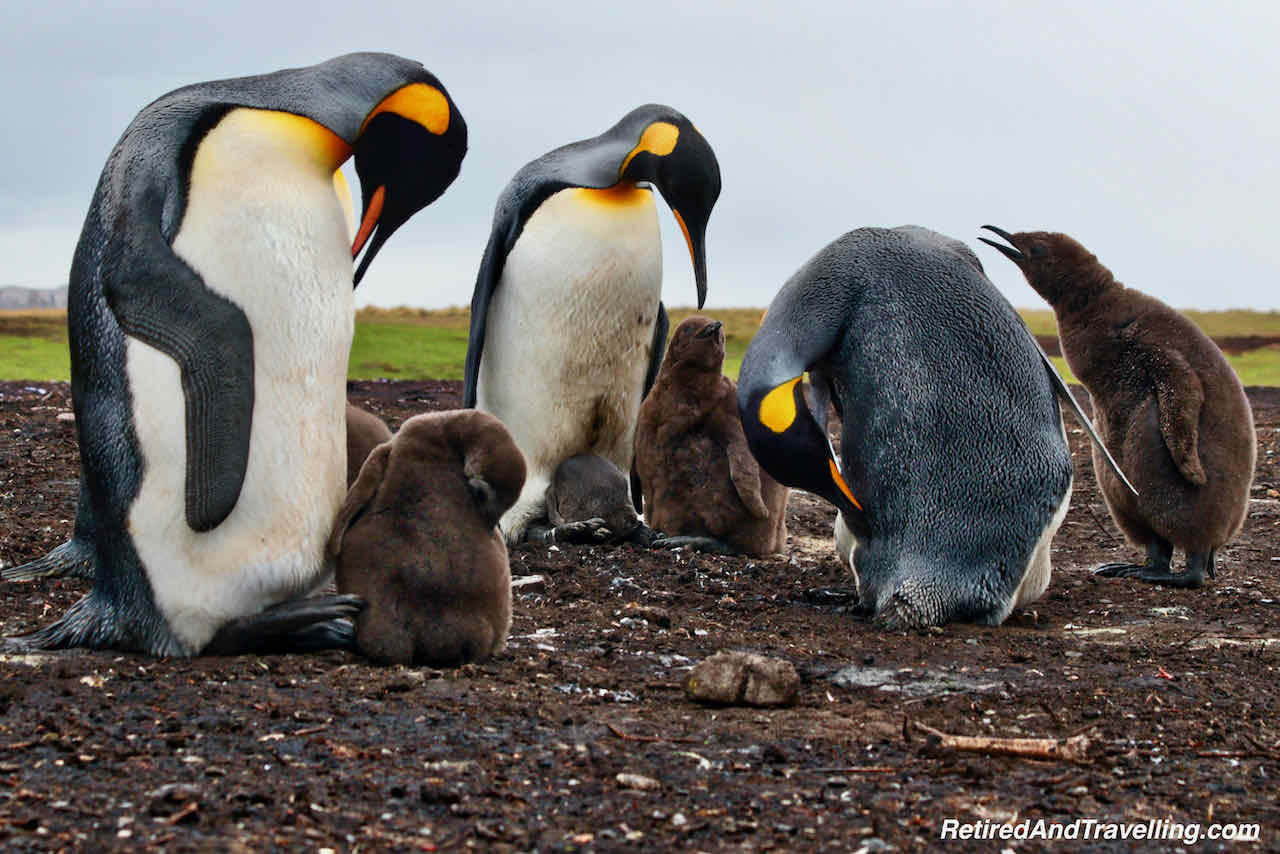 When we looked closely, we saw the chicks burrowed under the adult King Penguins. As we watched, the babies came out for feeding or care. 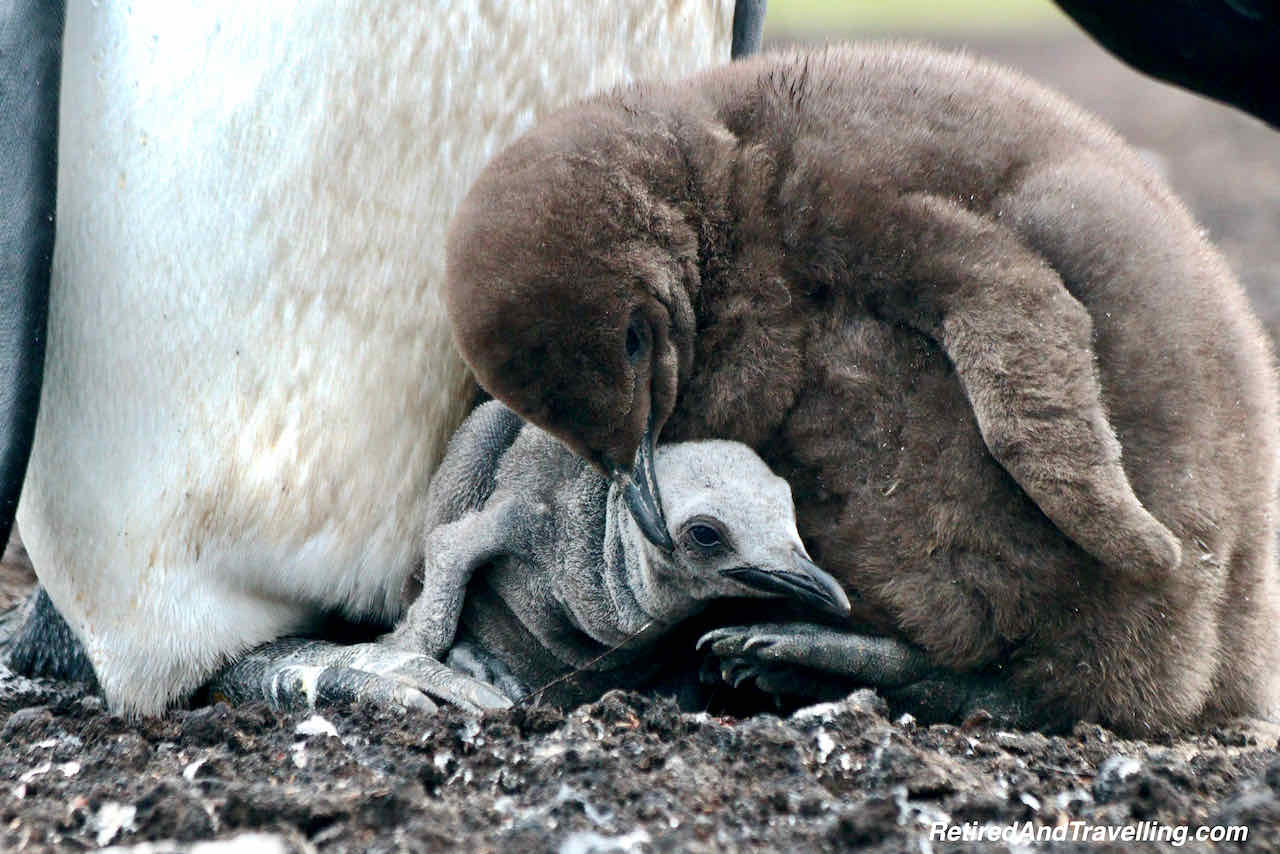 The King Penguins were definitely an unexpected treat when we visited Bluff Cove Lagoon for penguins in Stanley. 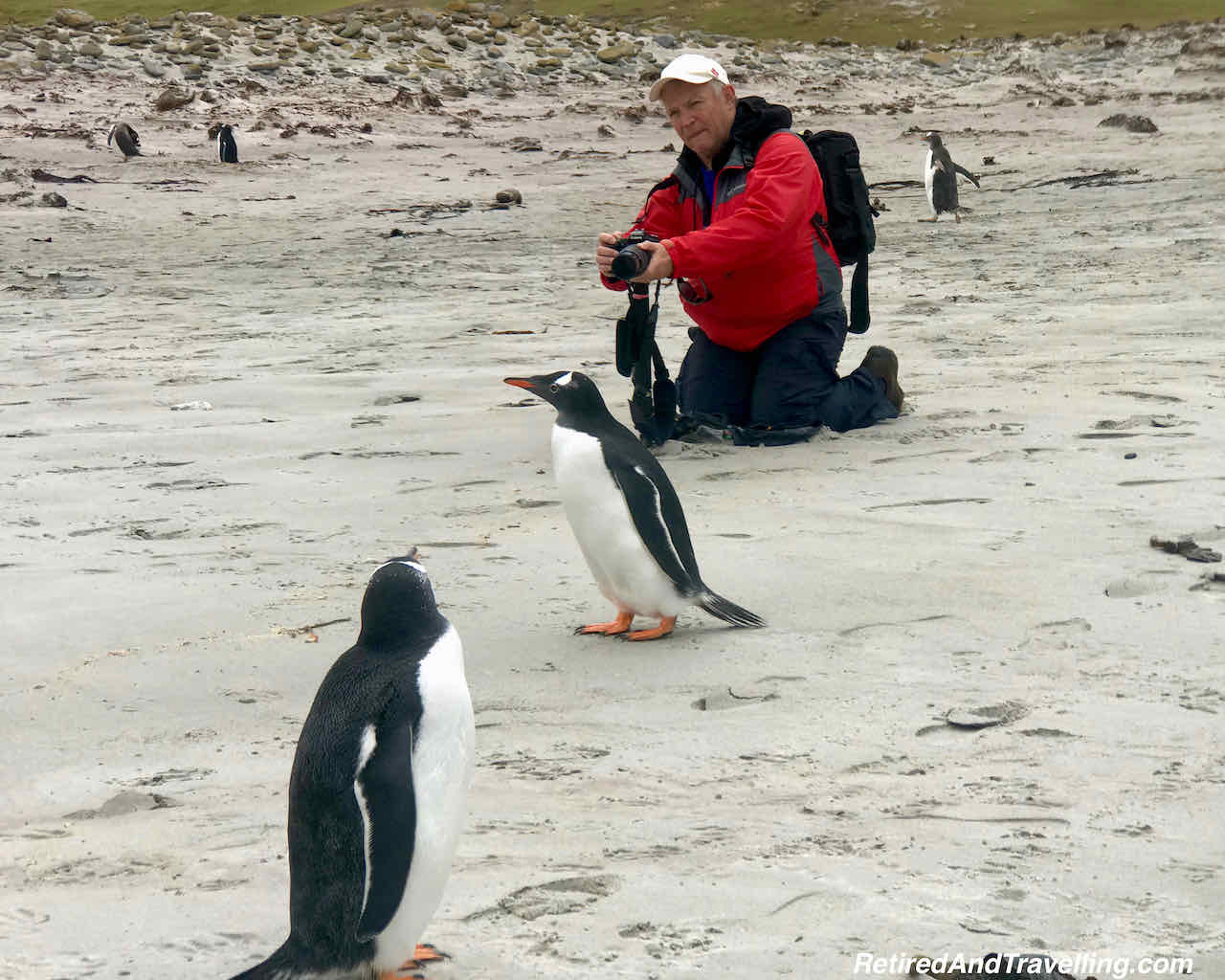 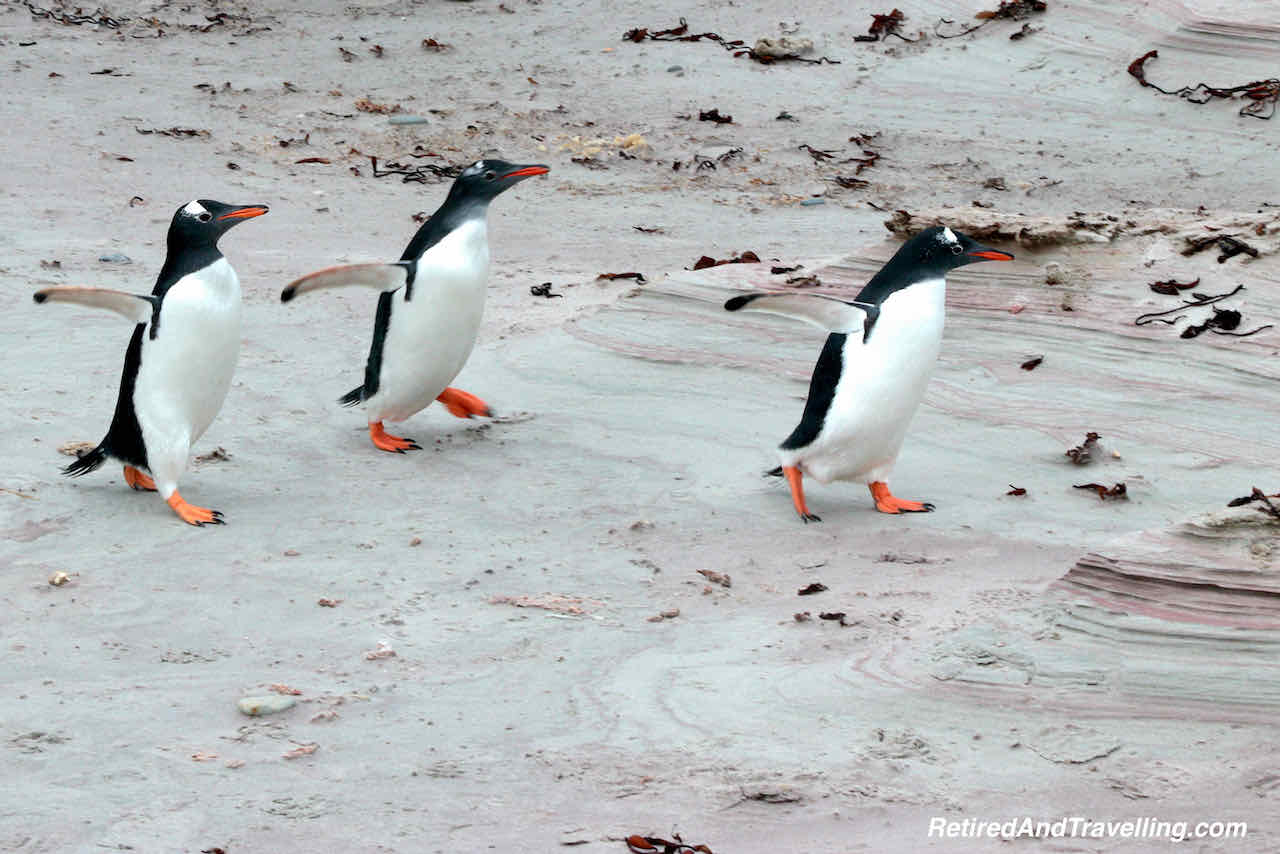 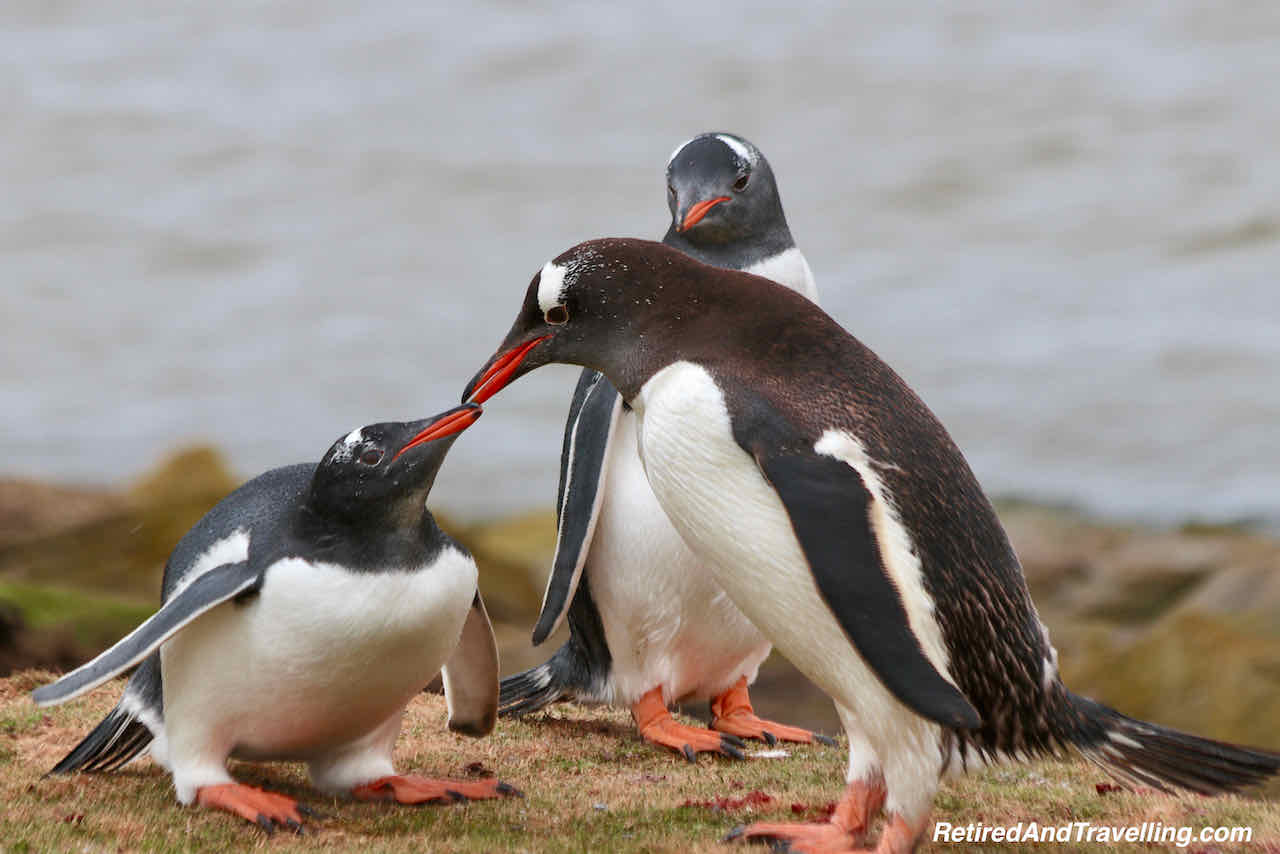 Down at the water we saw Gentoo Penguins as they tentatively approached the waves. It often took several waves before the penguins launched in and headed out to swim. And it was fun when we saw them run back out! 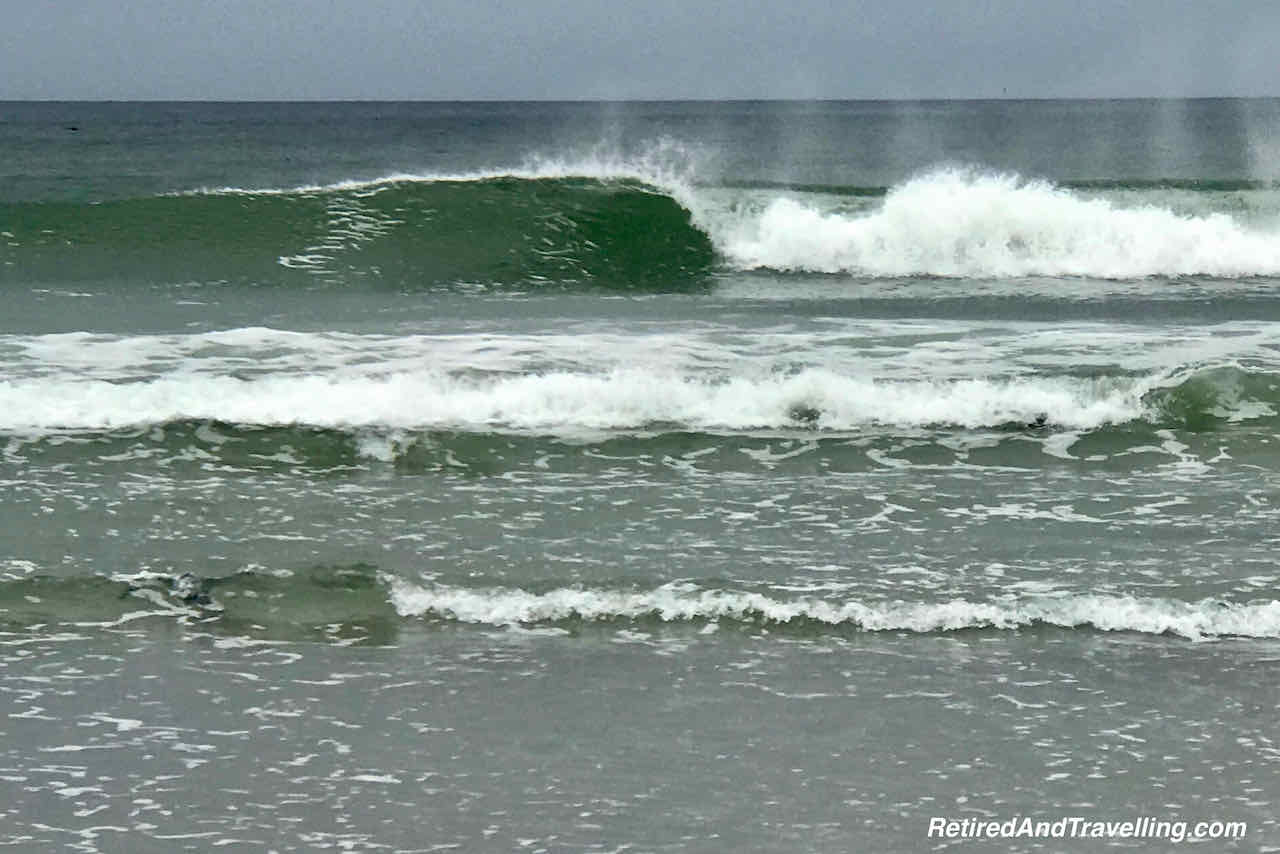 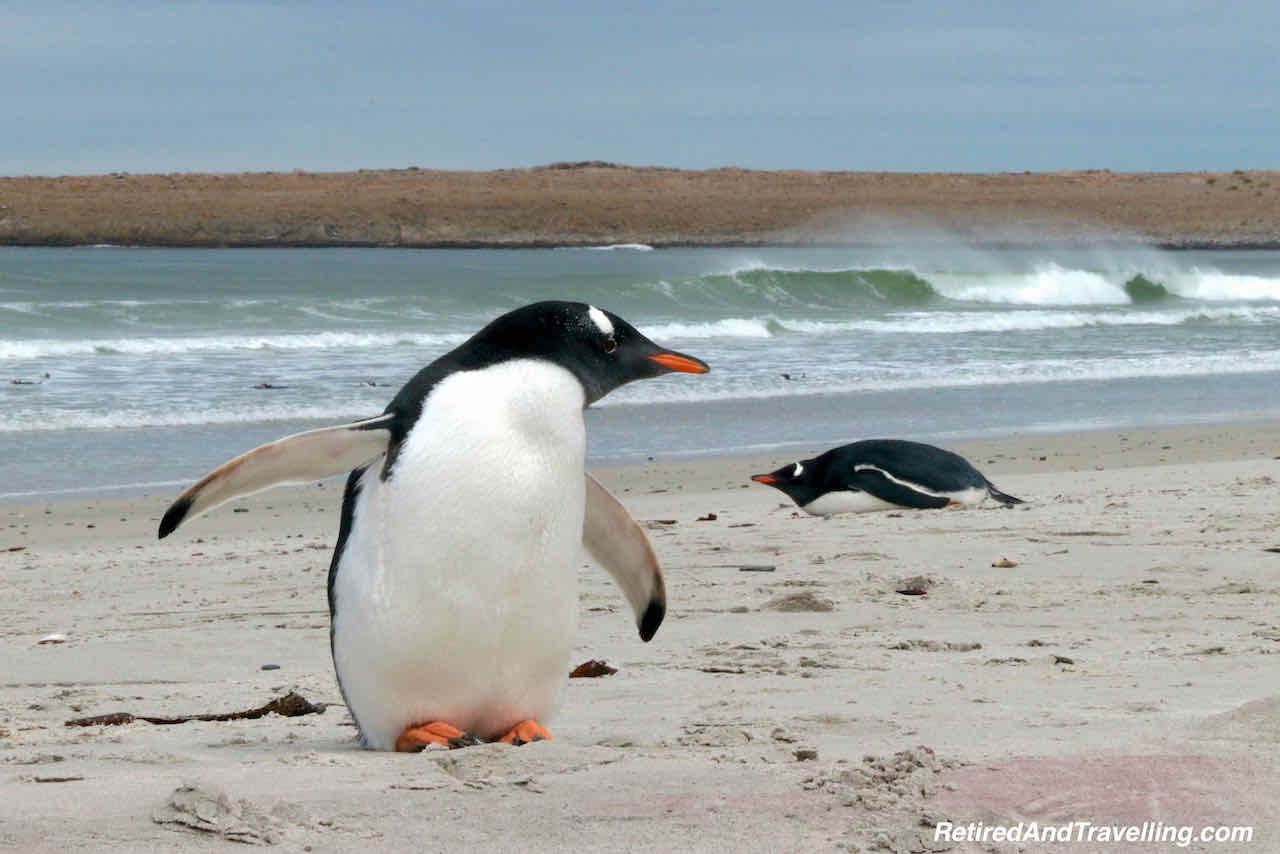 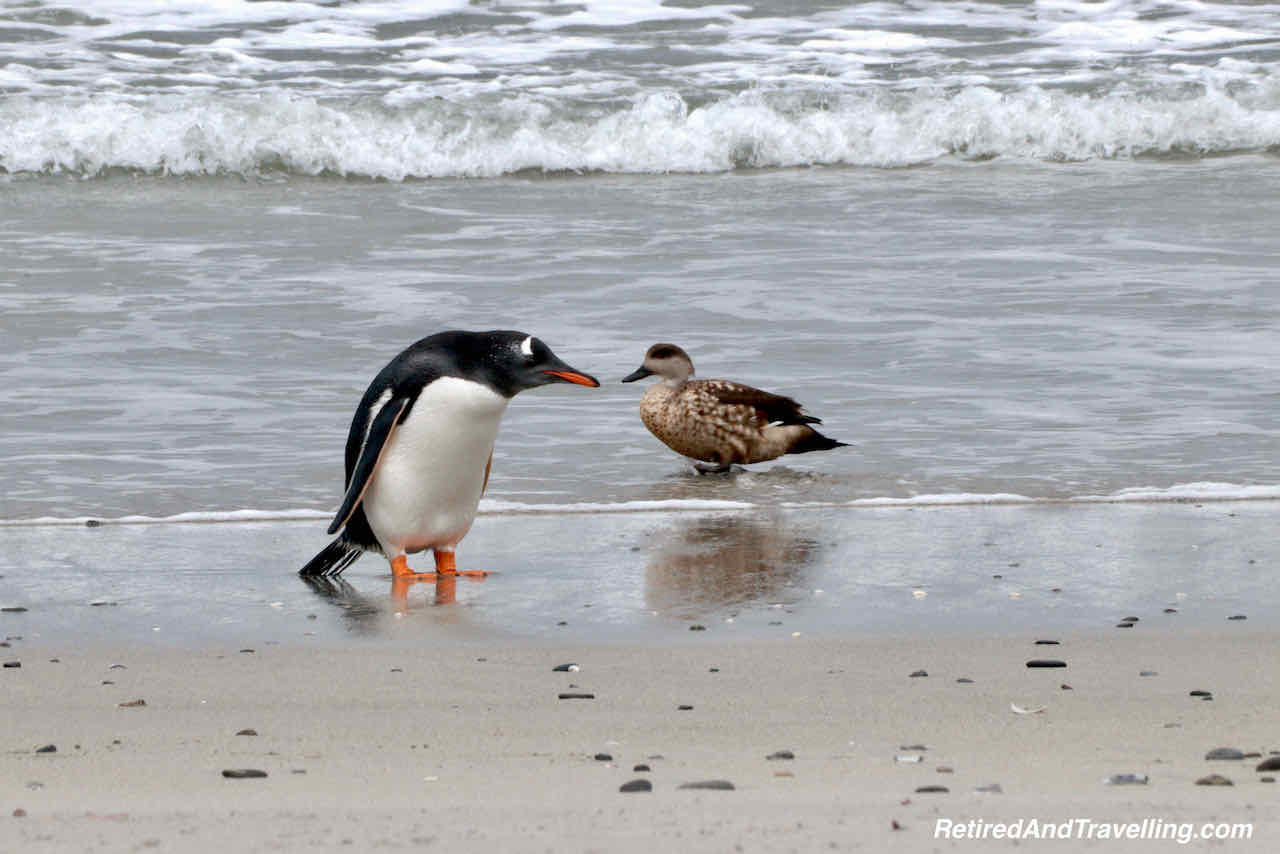 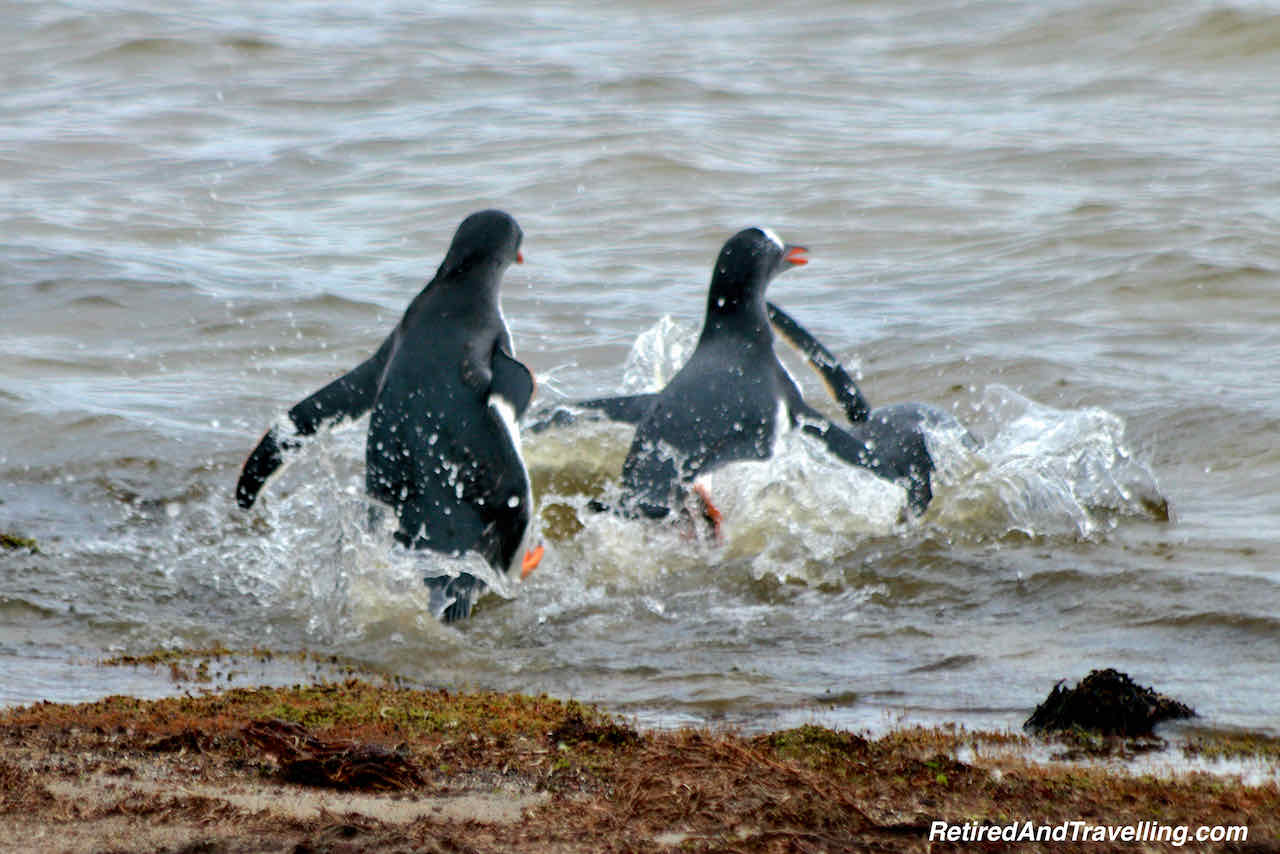 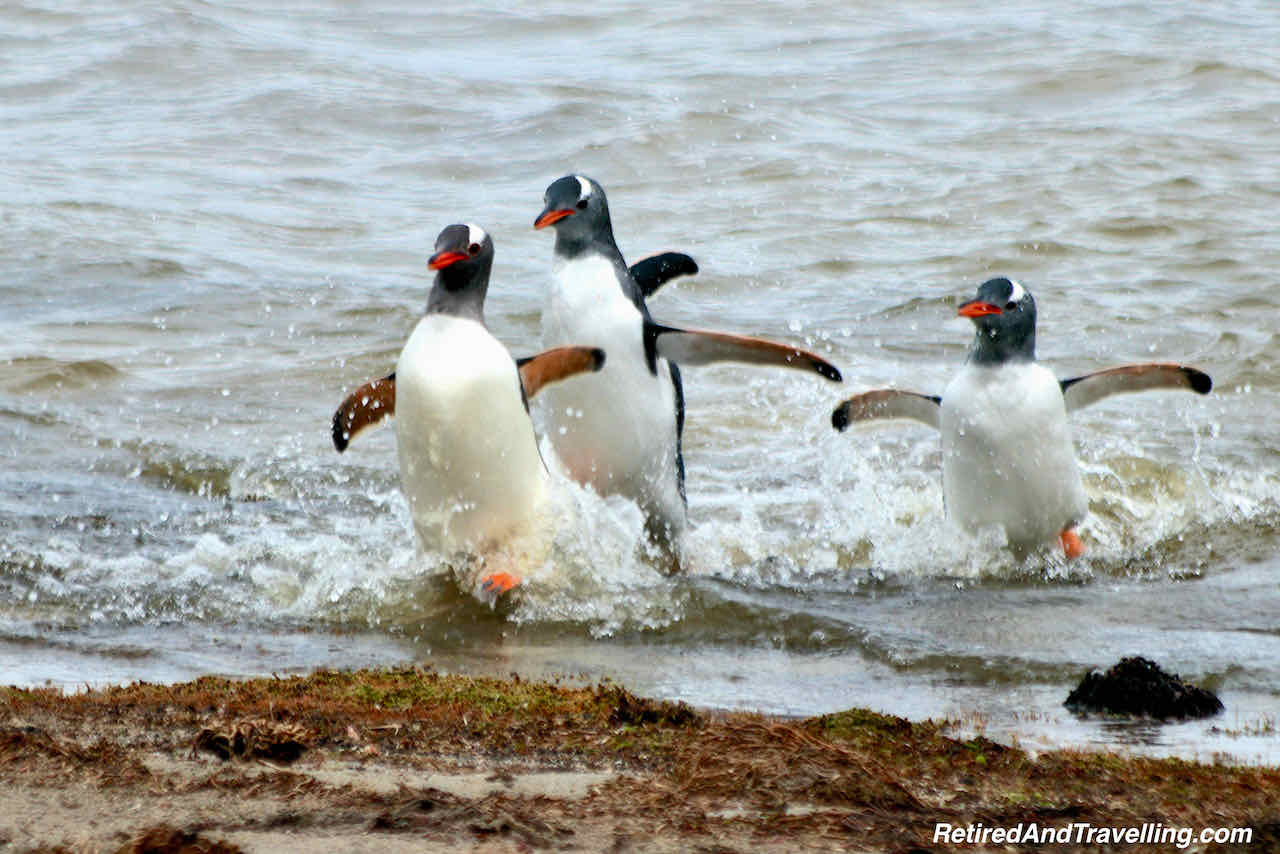 On our trip into Bluff Cove Lagoon, the guide pointed out a small shrub with berries. These tiny Diddle Dee berries were used to create jam. The final treat on our visit was to visit the Cafe for tea and scones with Diddle Dee berry jam. There was a souvenir shop that sold all kinds of penguin goods. And a museum too. 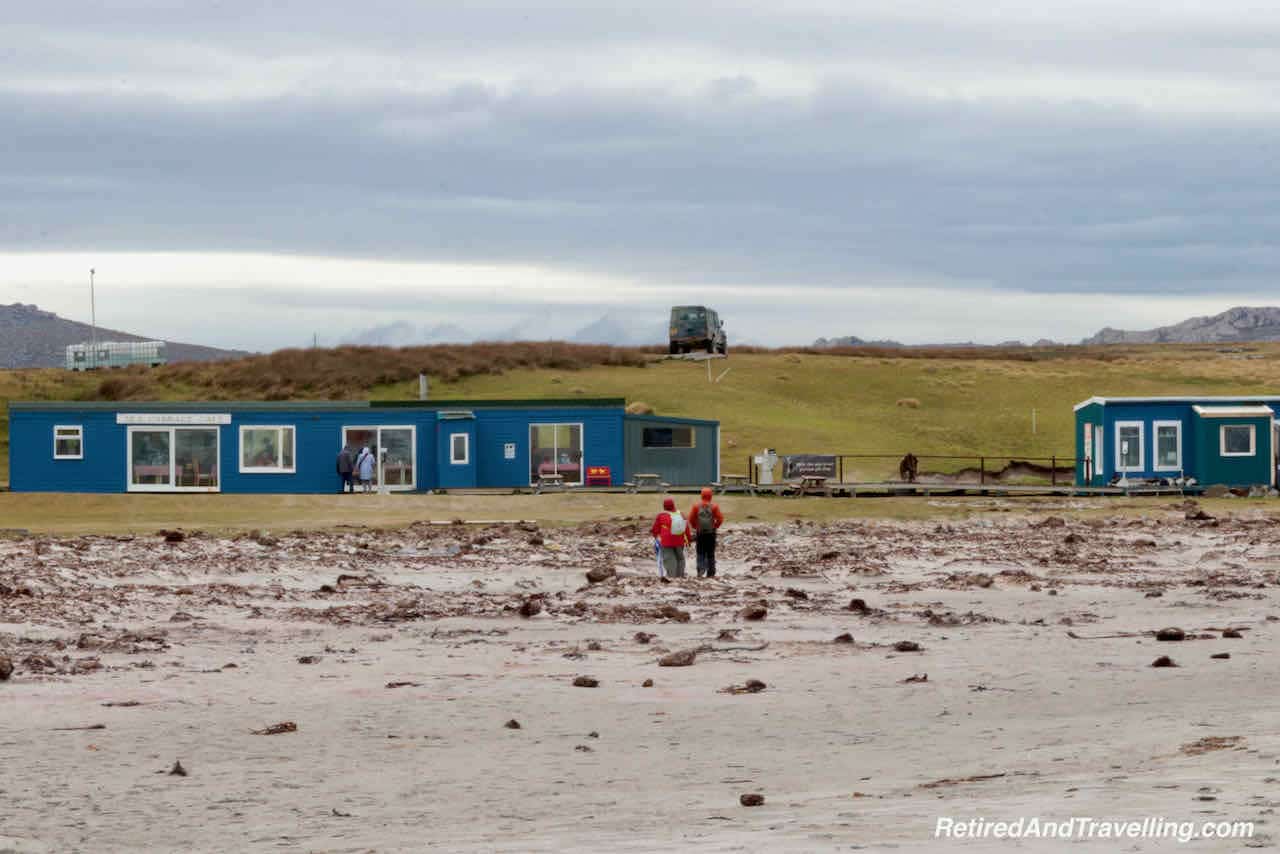 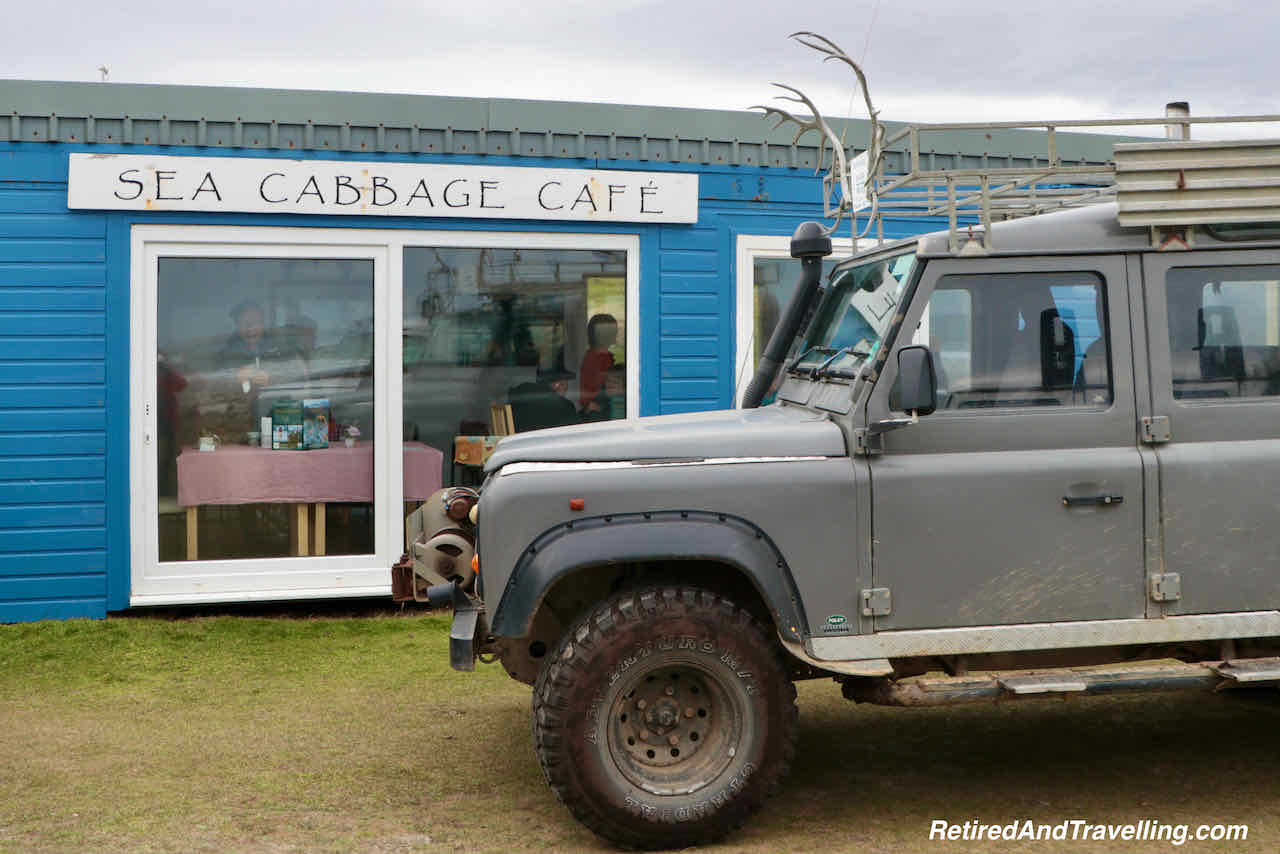 But the one hour visit was not enough. We wanted to spend most of our time with the penguins. So by the time we reached the cafe, it was time to re-board our Land Rover. We really needed much longer to visit Bluff Cove Lagoon for penguins in Stanley.

We were so happy we booked an excursion to visit Bluff Cove Lagoon for penguins in Stanley. We saw so many more penguins than we expected. It was the end of February and we were afraid that the penguin population would have moved.

It was great to have some time to wander around Stanley. And we learned a bit about the Falkland Islands.

We really wanted to head out to Volunteer Point for a different penguin experience. But it was a long trip from Stanley. And we did not have the time with one excursion already booked. This just meant there was more to do on a return trip, perhaps en-route to Antarctica? To our delight, we found more penguins on our cruise around South America when we visited Magdalena Island in Chile.

Did you visit Bluff Cove Lagoon for Penguins in Stanley Falkland Islands? Or did you see penguins somewhere else? 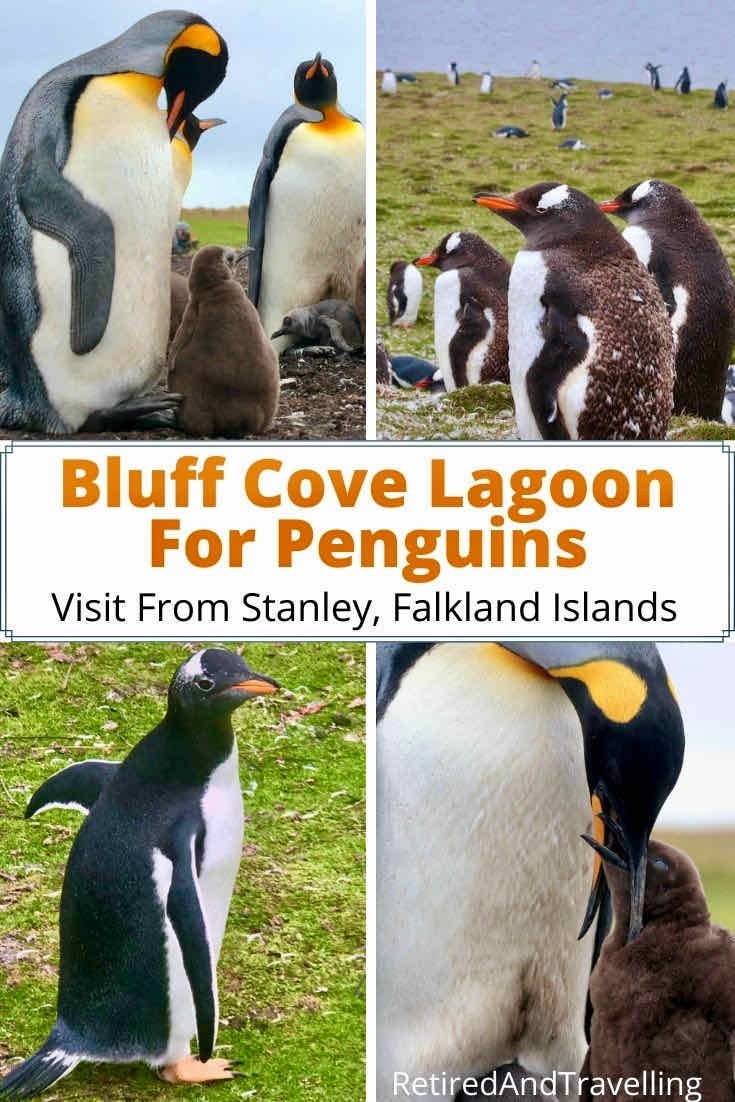 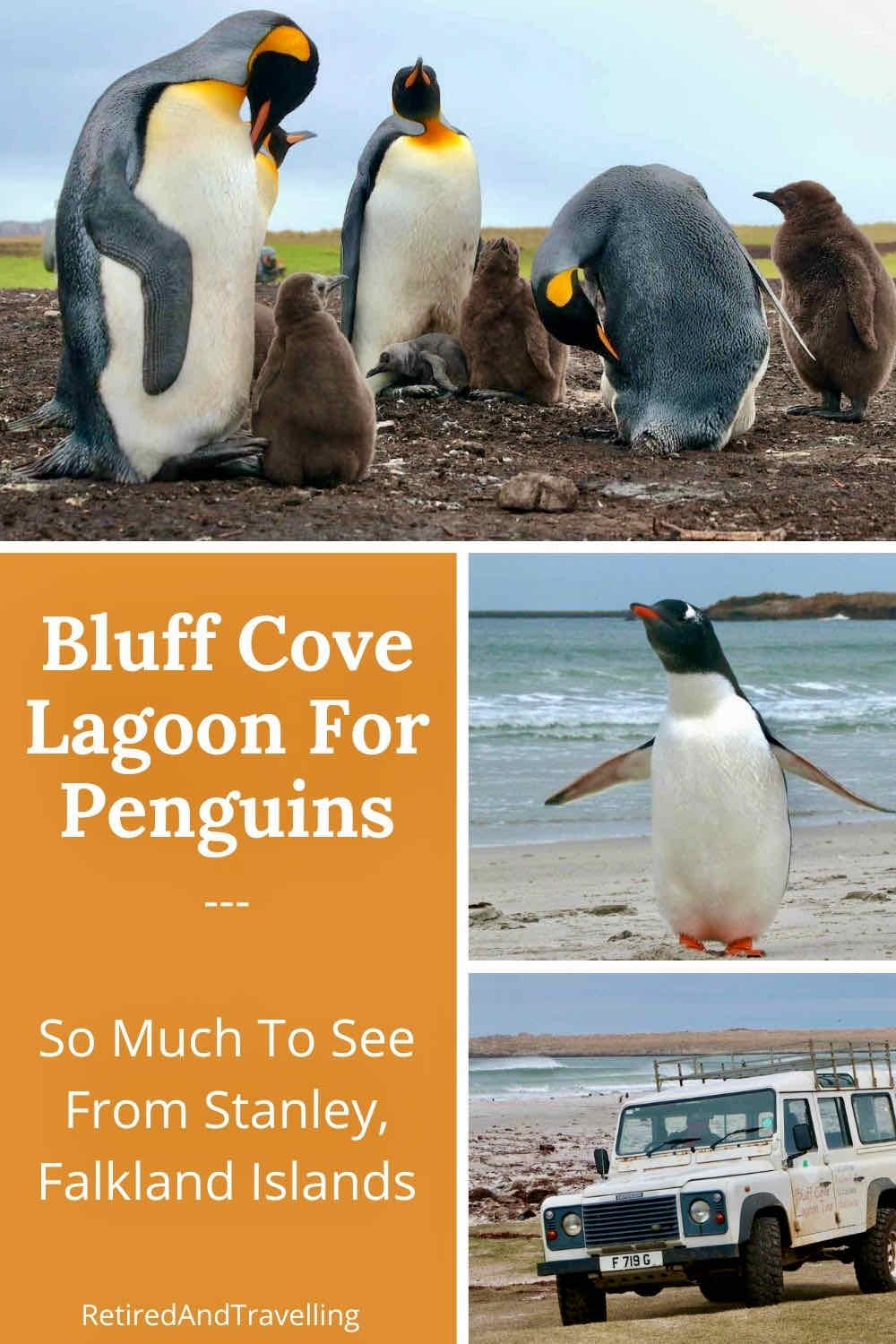 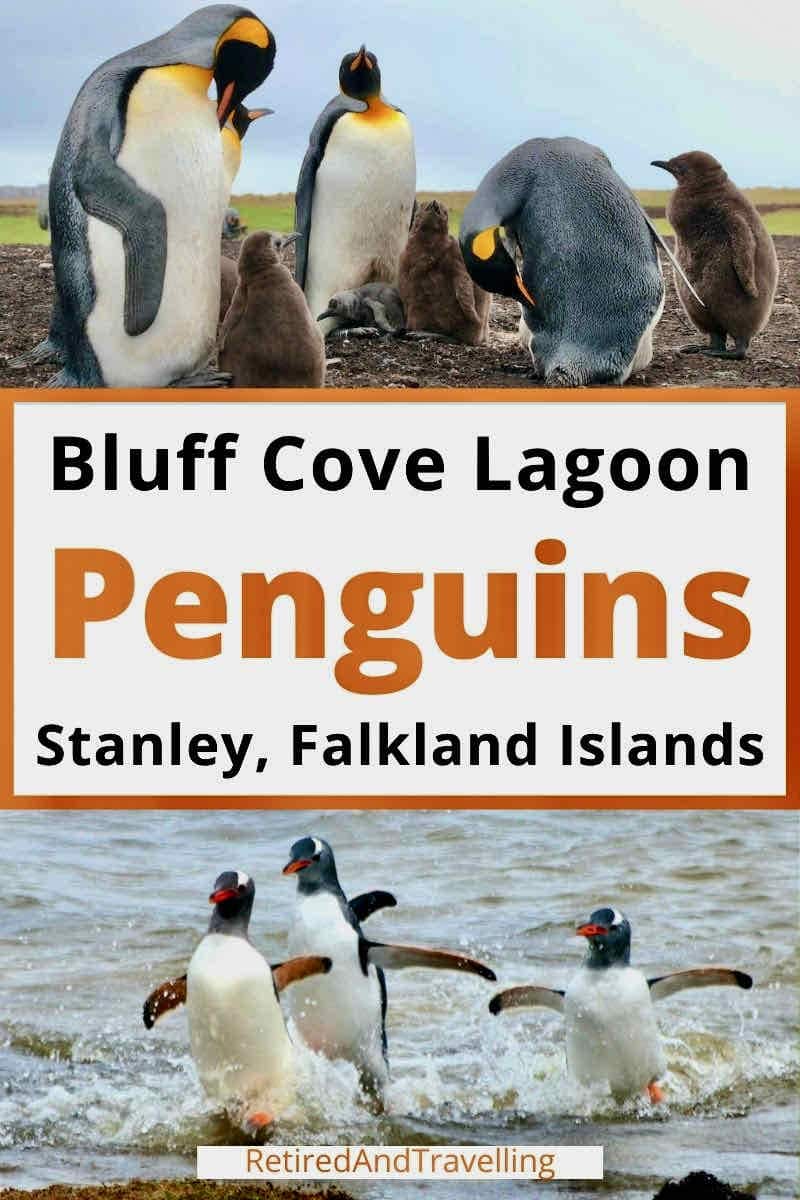 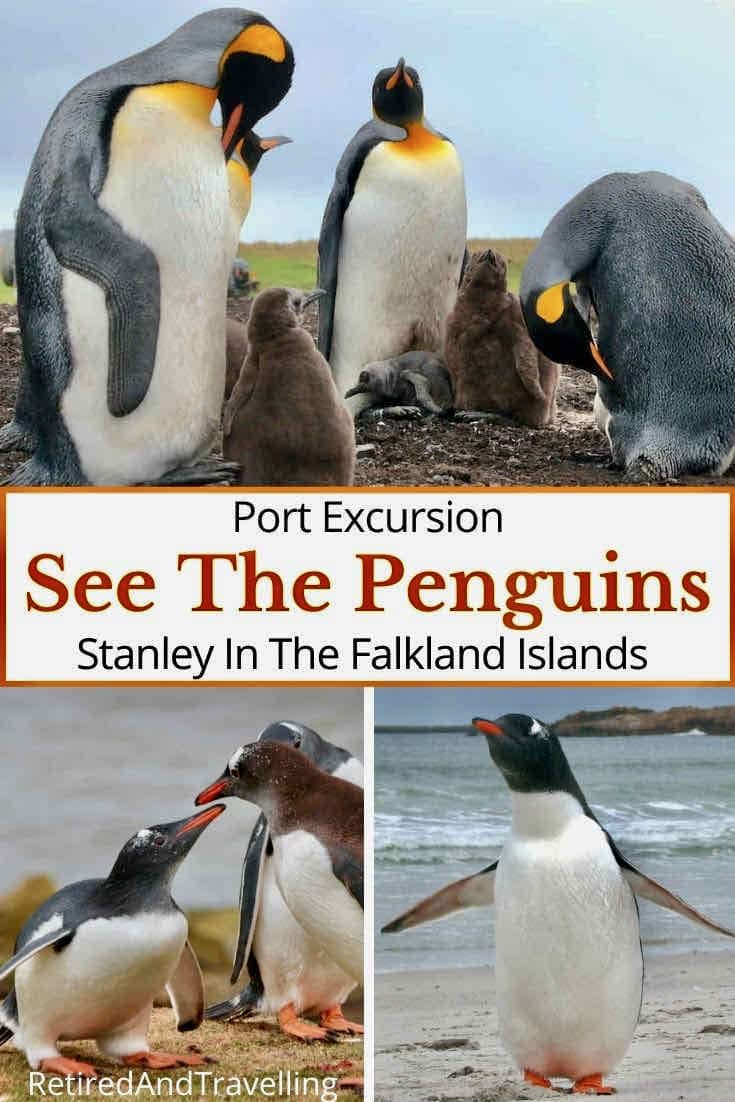