A Great Day To Visit Magdalena Island For Penguins

It was a great day to visit Magdalena Island for penguins on our day in Punta Arenas, Chile. We were intrigued with how many penguins we saw when we visited Bluff Cove Lagoon when we visited to the Falkland Islands. So we could not pass on another penguin experience in this port.

When we docked in Punta Arenas, the morning was grey and wet. Our Oceania Cruises ship was docked at the commercial port and we required a shuttle to town. So we passed on seeing town on our own.

The sky was a bit lighter when we finally boarded our buses. As the catamaran moved out into the bay, stretches of blue sky showed up. By the time we got to Magdalena Island for penguins on our day in Punta Arenas, the sun was shining. It was the perfect day to visit with the penguins.

A Short Drive Through Town

Even though we were just going down the shore, our bus gave us a short drive through the town of Punta Arenas. We were intrigued with the colourful tile work and murals we saw along the way. 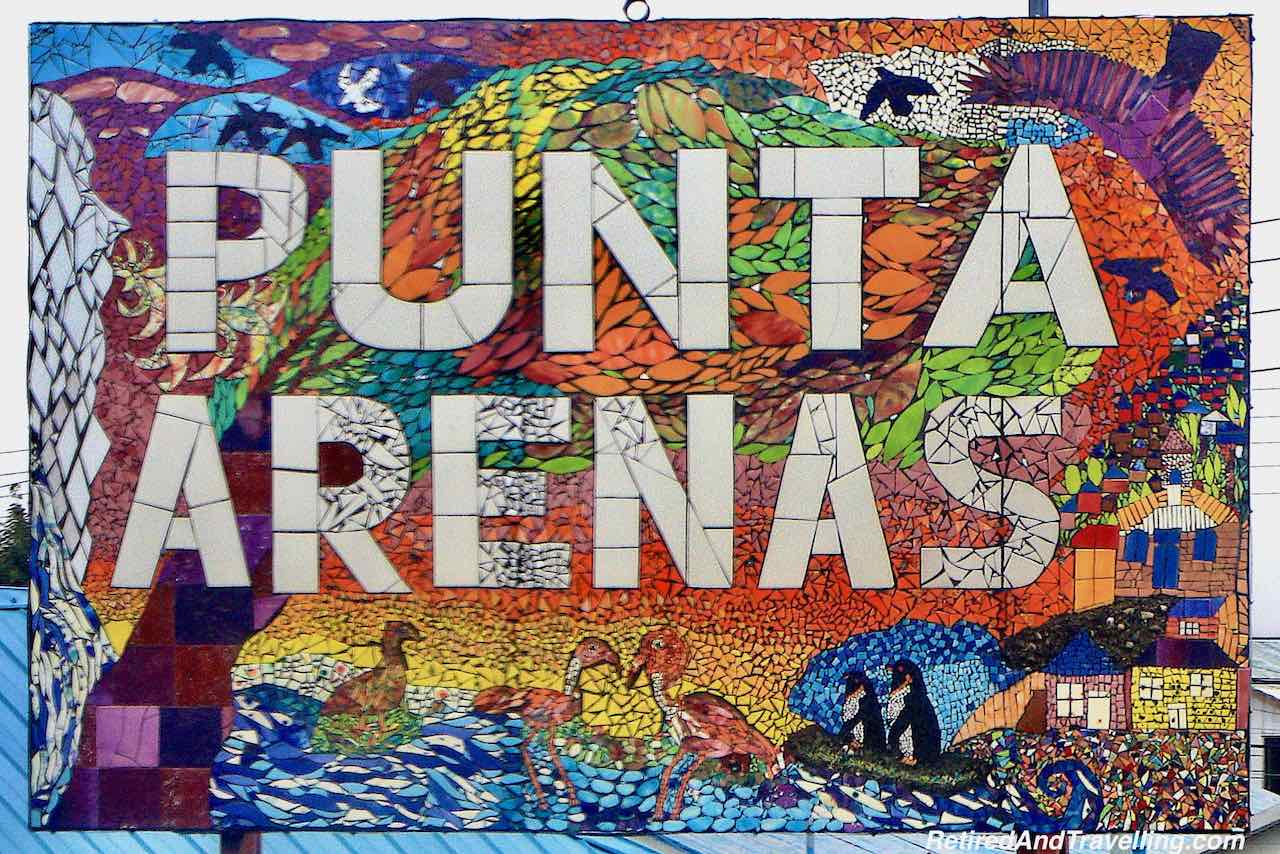 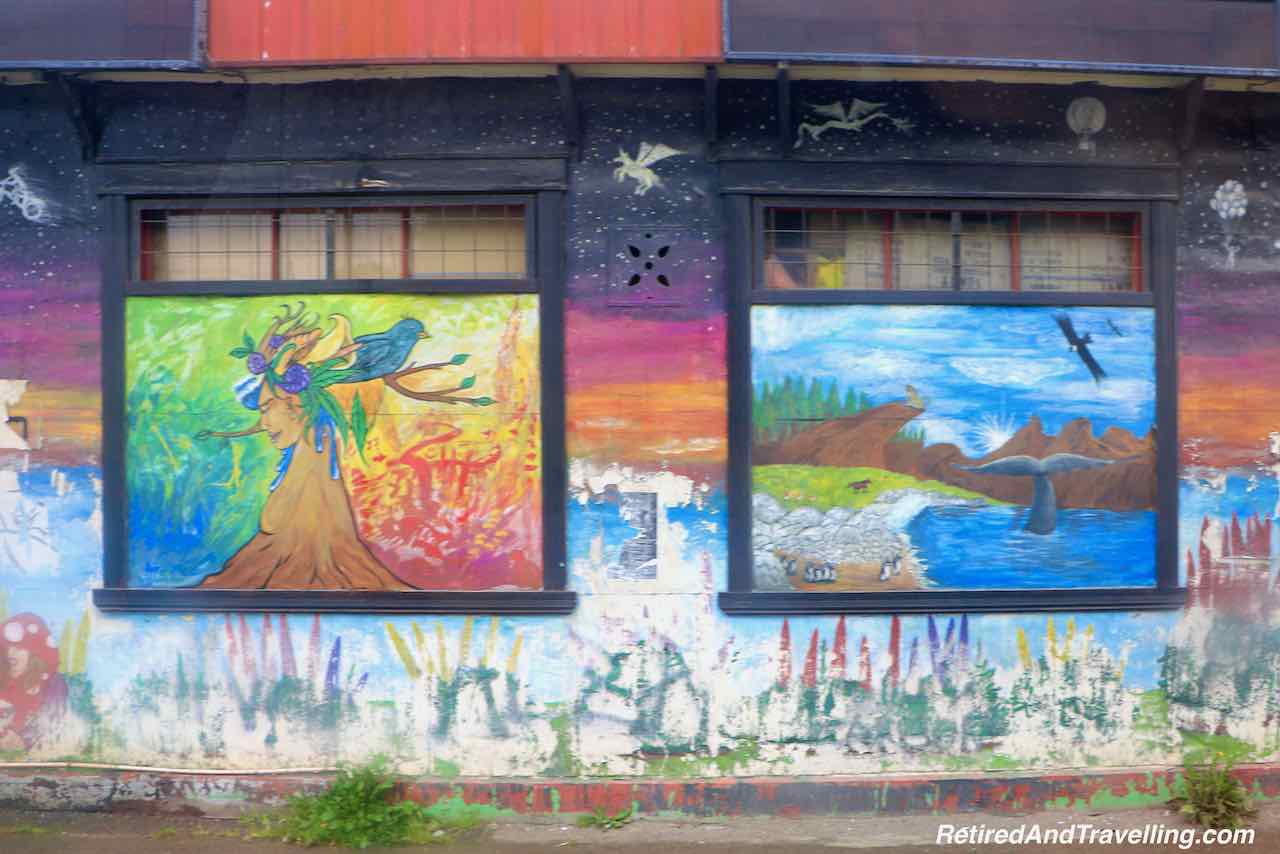 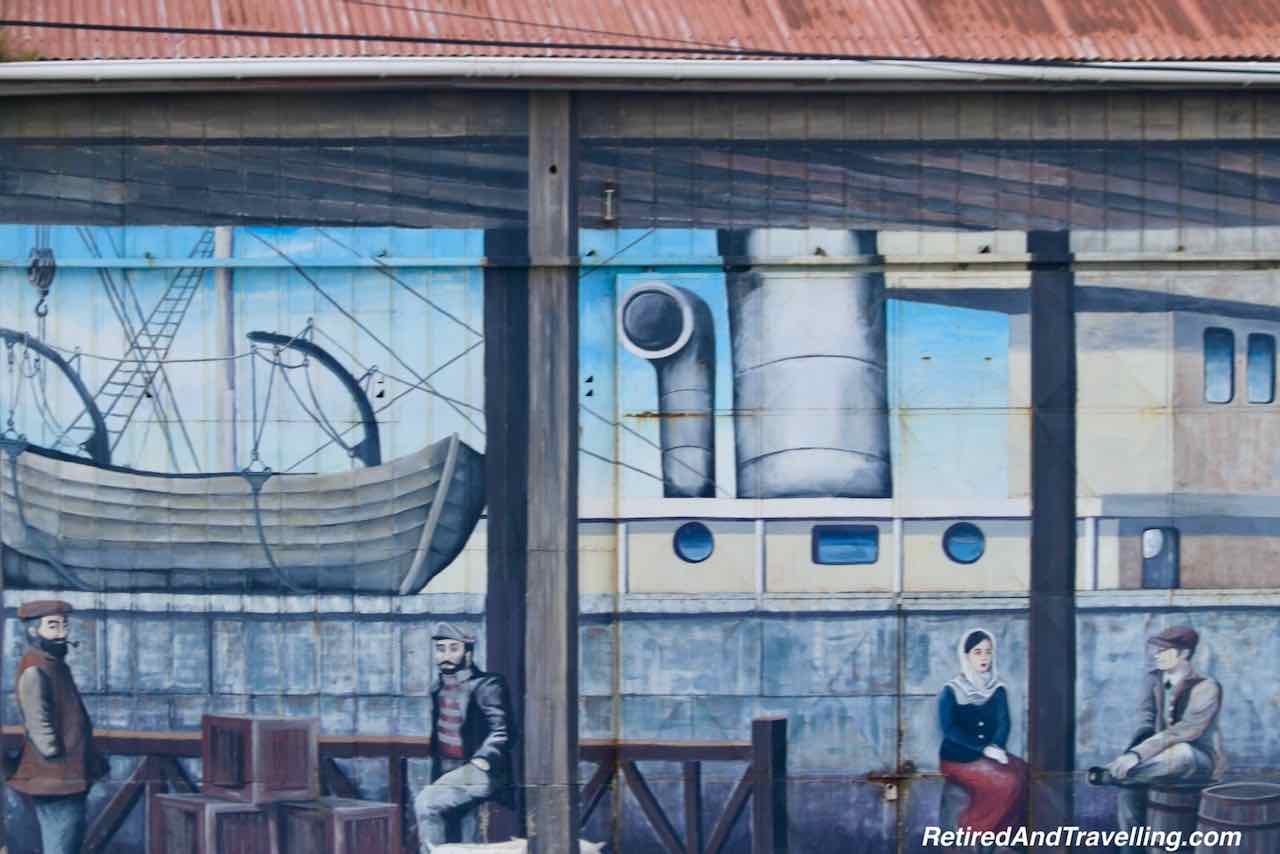 The bus finally arrived at the dock and we saw the Fiordos Del Sur catamaran. It was time for our visit to Magdalena Island for penguins.

Heading Out To Magdelena Island

Three busloads from our ship were packed into the catamaran. The crew gave us a safety briefing. And everyone was required to remain inside when the ship was in the bay.

As we headed out, the weather got better and better. So we were delighted when we finally were allowed out on deck. As the catamaran went past, we caught sight of playful dolphins and lazy sea lions. 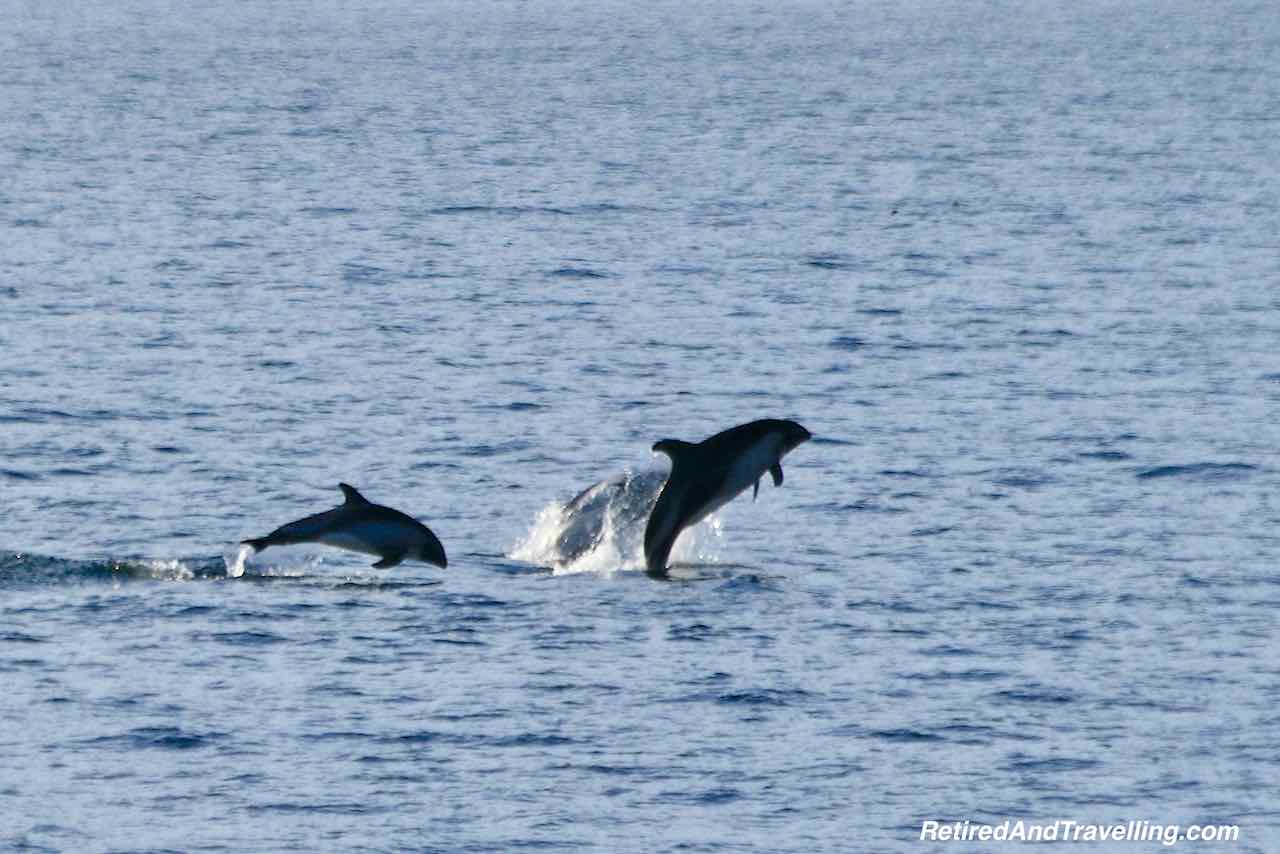 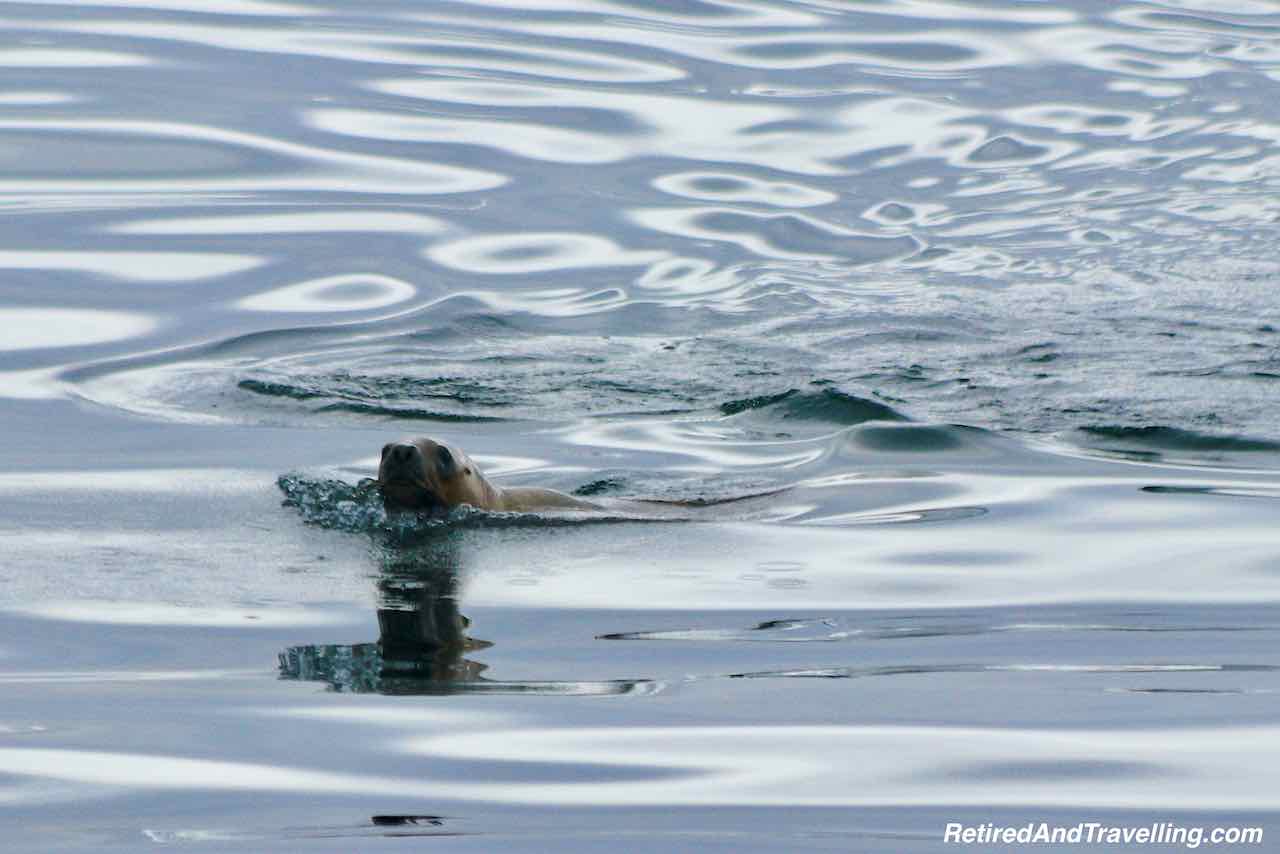 We enjoyed the catamaran trip out to Magdalena Island.

We got our first view of Los Pinguinos National Monument on Magdalena Island as we pulled up. Magdalena Island was an uninhabited island located in the Strait of Magellan. It appeared that there was a limit on how many could be on the island at one time. Another tour boat floated just offshore. 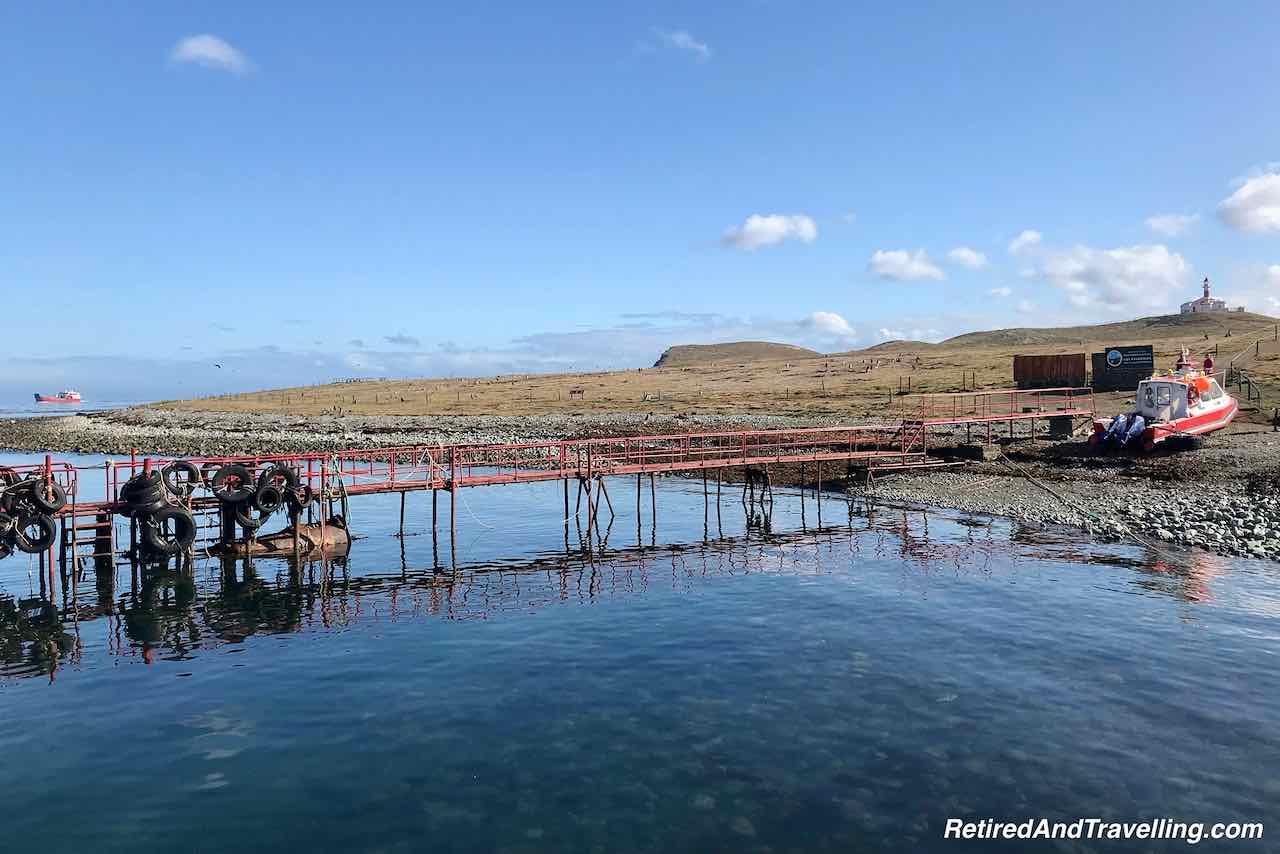 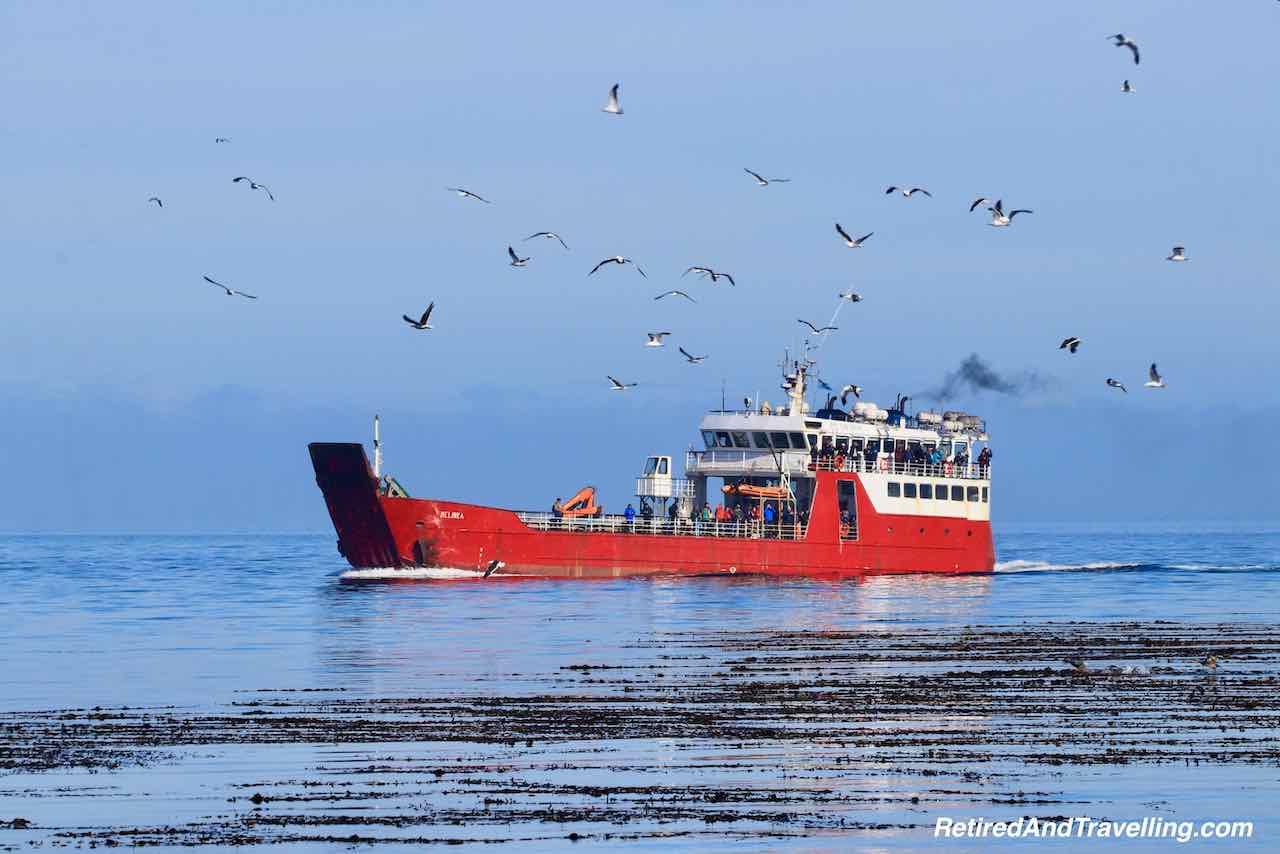 We had our first penguin encounter on our cruise around South America when we visited the Bluff Cove Lagoon on our visit to the Falkland Islands. On that trip we saw both Gentoo and King Penguins. On this excursion we saw the Magellanic penguins. We were excited when we learned Magdalena Island was home to 350,000 Magellanic penguins.

Magellanic penguins were named by the explorer Ferdinand Magellan in 1520. These were medium sized penguins with black backs and white abdomens. We saw many with a small but noticeable region of pink flesh on the face. They typically lived about 25 years. Large flocks settled in September and stayed into late February and March for breeding.

When we visited, many of the penguins showed definite signs of molting. The penguins experienced what scientists called a “catastrophic molt” that makes them look like a down pillow exploded. It takes them a couple of weeks to regain their plumes. While they are molting, they can’t swim or hunt!

We were certainly excited as we approached the island to see these interesting Magellanic penguins.

We Wandered Around Magdalena Island For Penguins

The catamaran pulled up right to the rocky beach and a ramp was put down from the bow. We exited and soon found penguins approach to check out the new arrivals. We moved along the path around the island. Barriers kept the people back from the penguins. 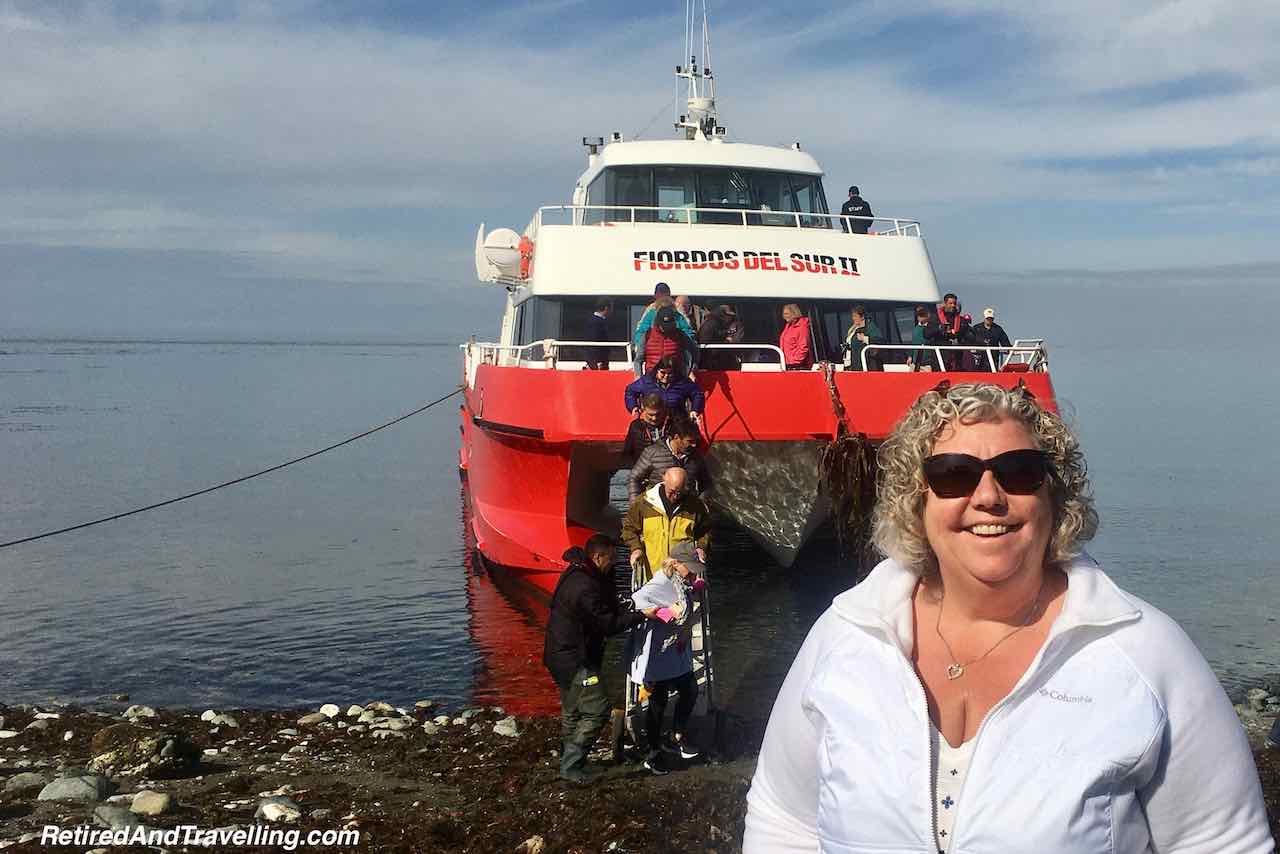 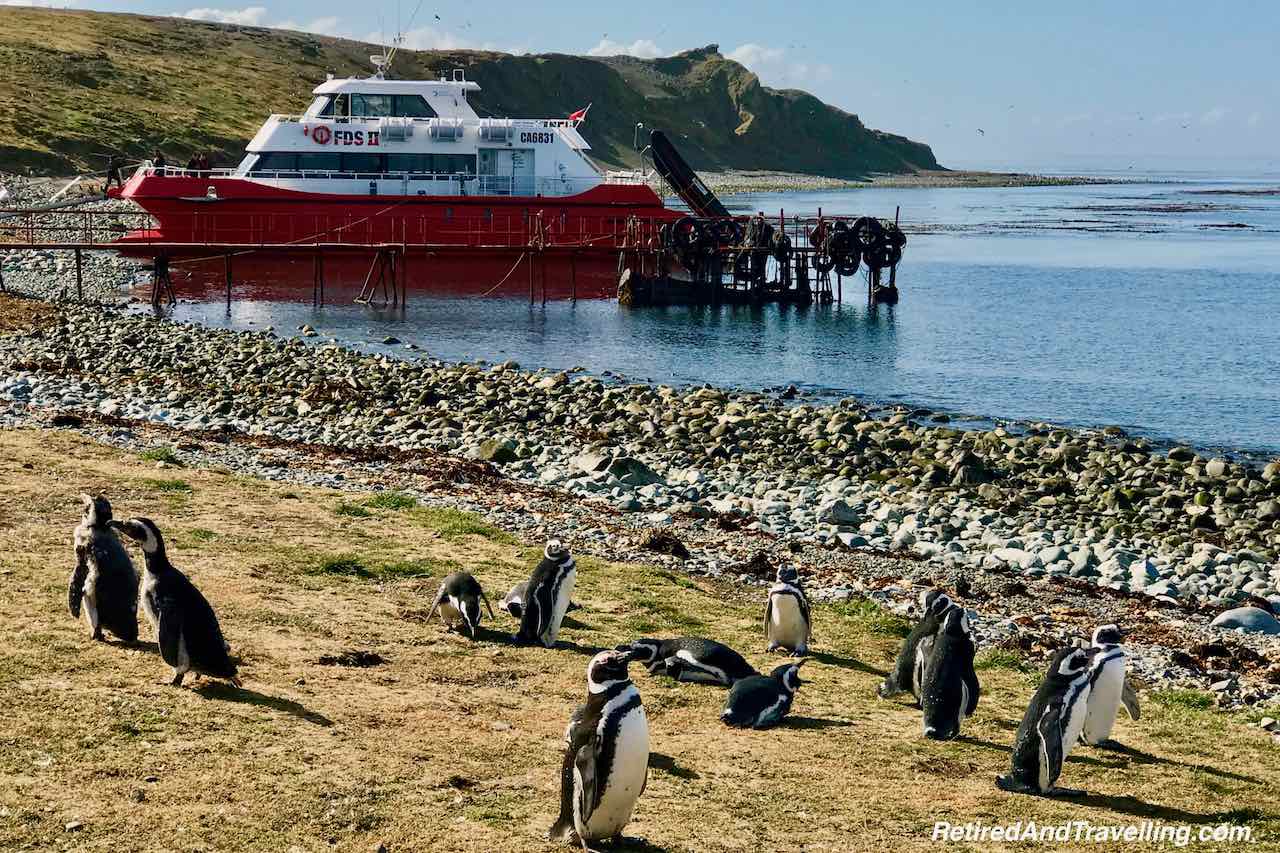 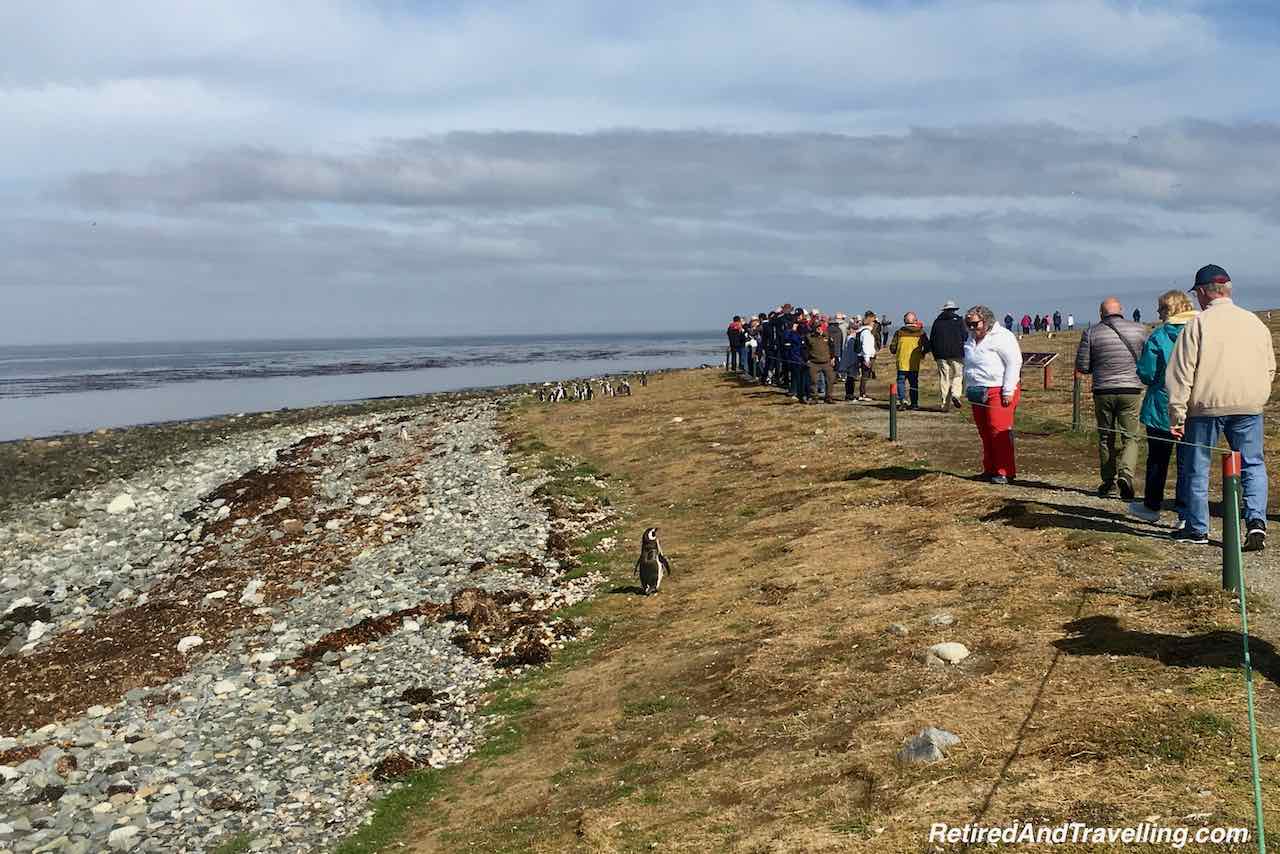 High up on the hill was saw the Faro Isla Magdalena lighthouse. This lighthouse became operational in 1902 and was used by Chile’s Navy to guard the coast. During the 1950’s the lighthouse was automated and is no longer manned. The building was used by the people who manage the penguin reserve. 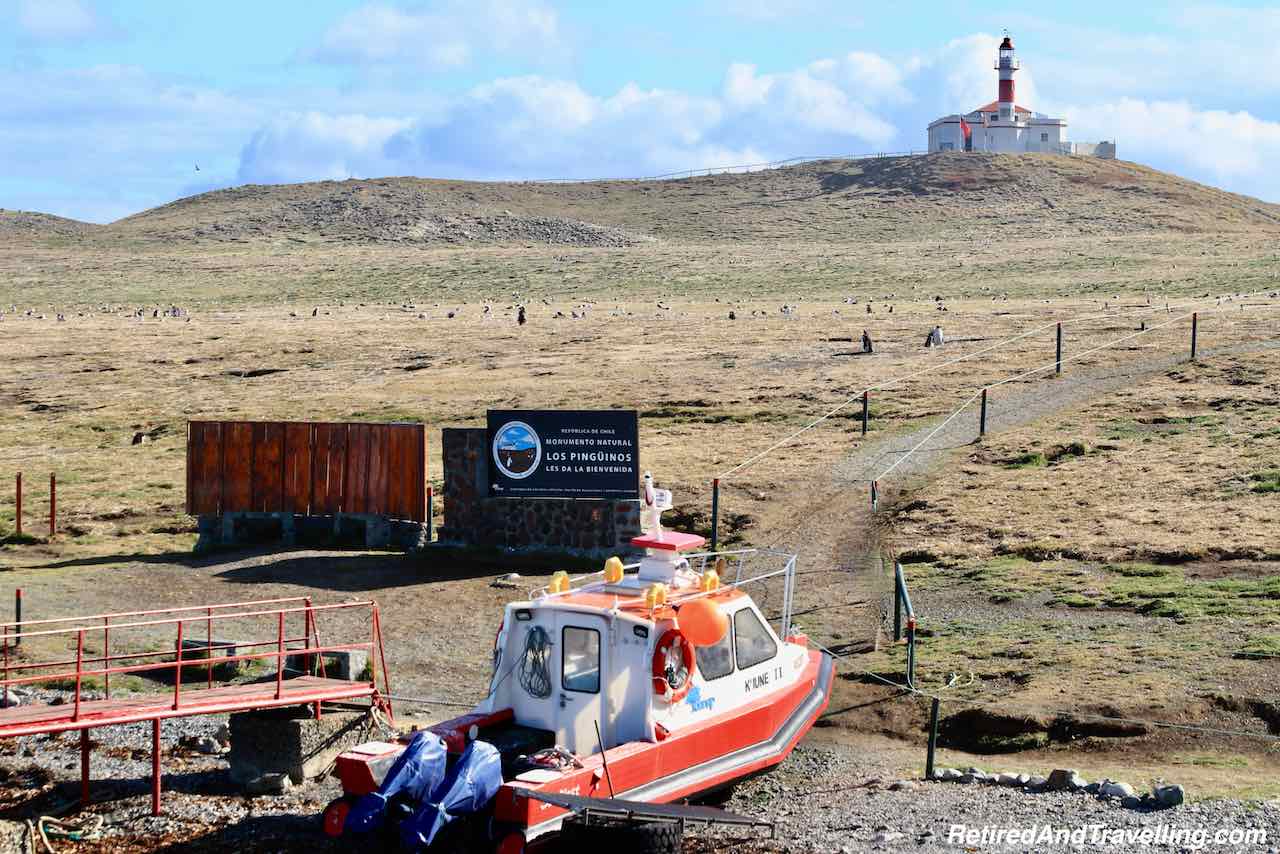 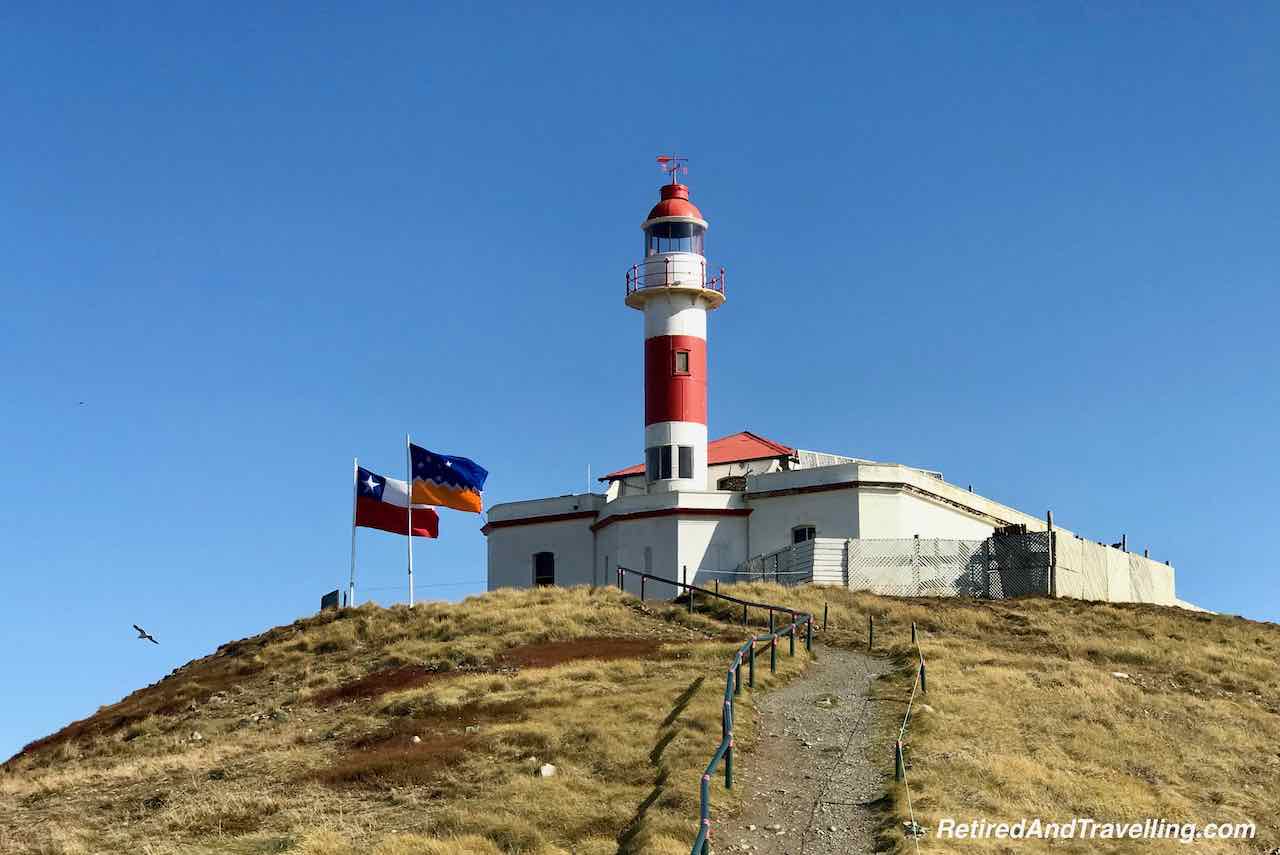 As we walked around the island we got great views out over the vast open areas. And everywhere we looked we saw groups of the penguins on Magdalena Island. 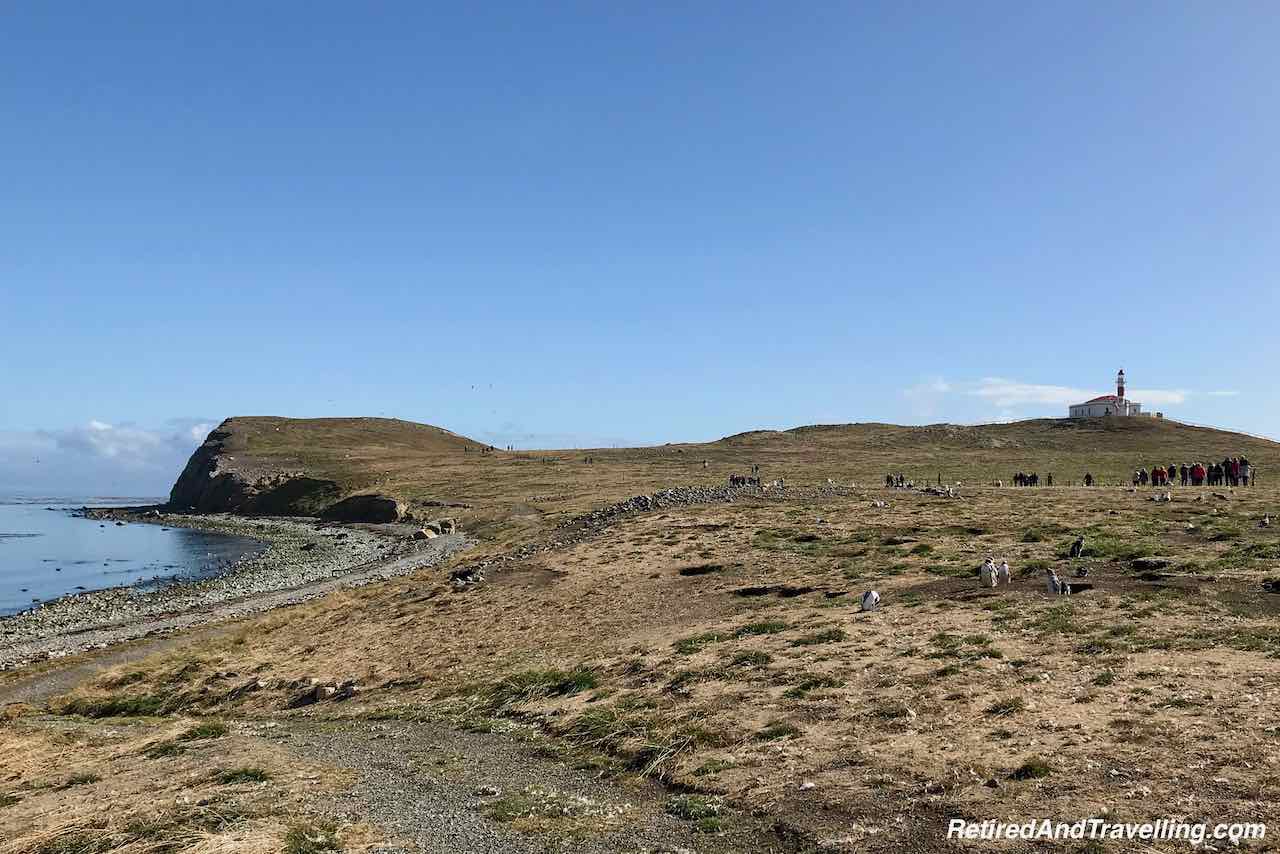 Penguins All Around Magdalena Island

As we walked along the shore, we saw groups of penguins close to the water. But we did not see any in the water fishing for their food. 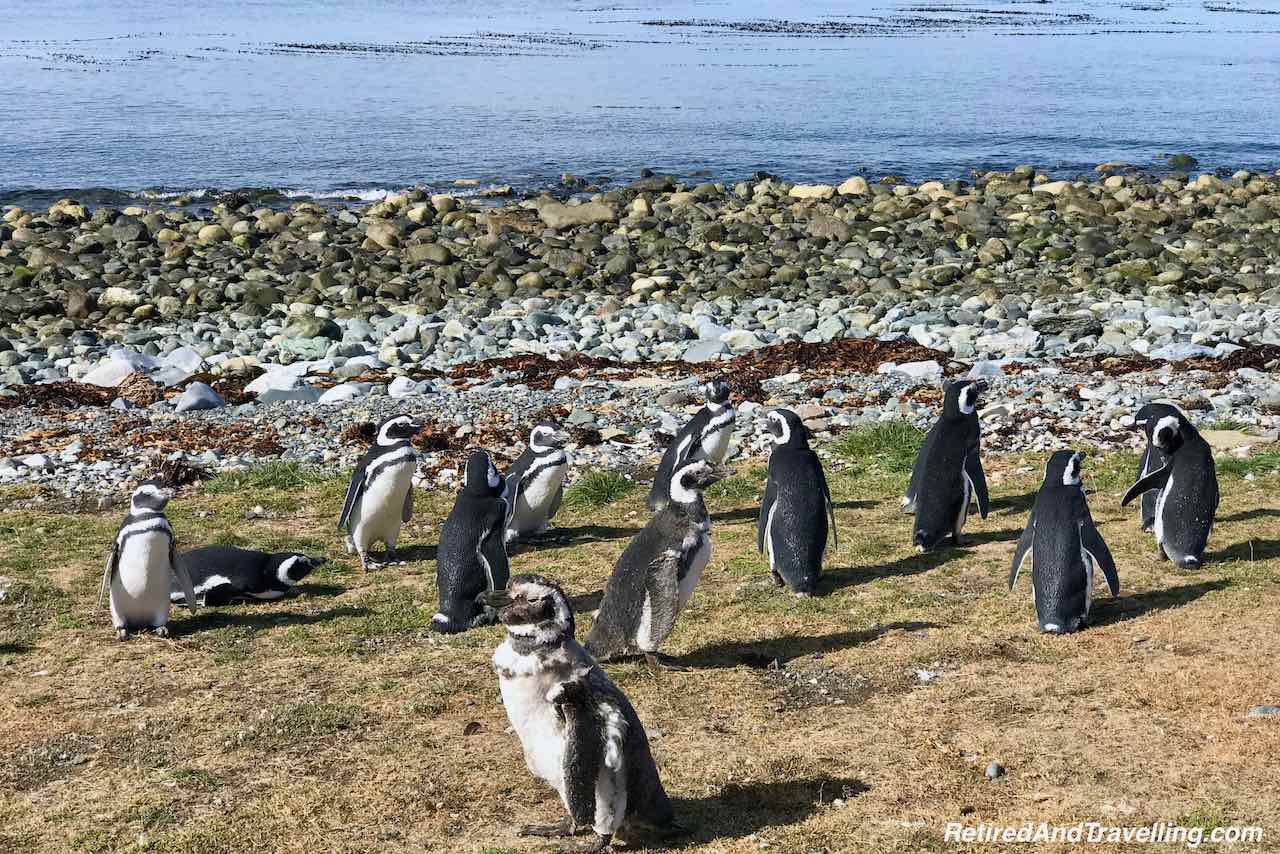 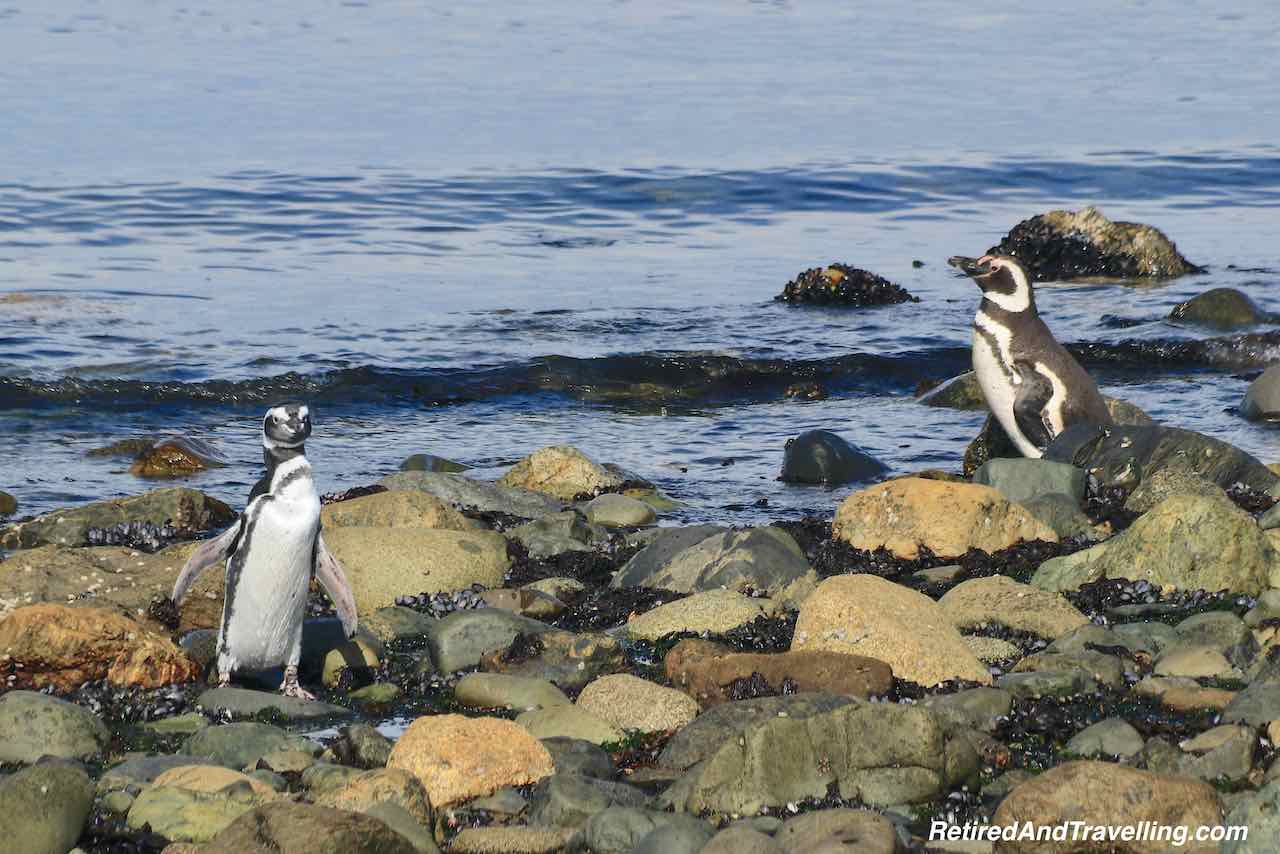 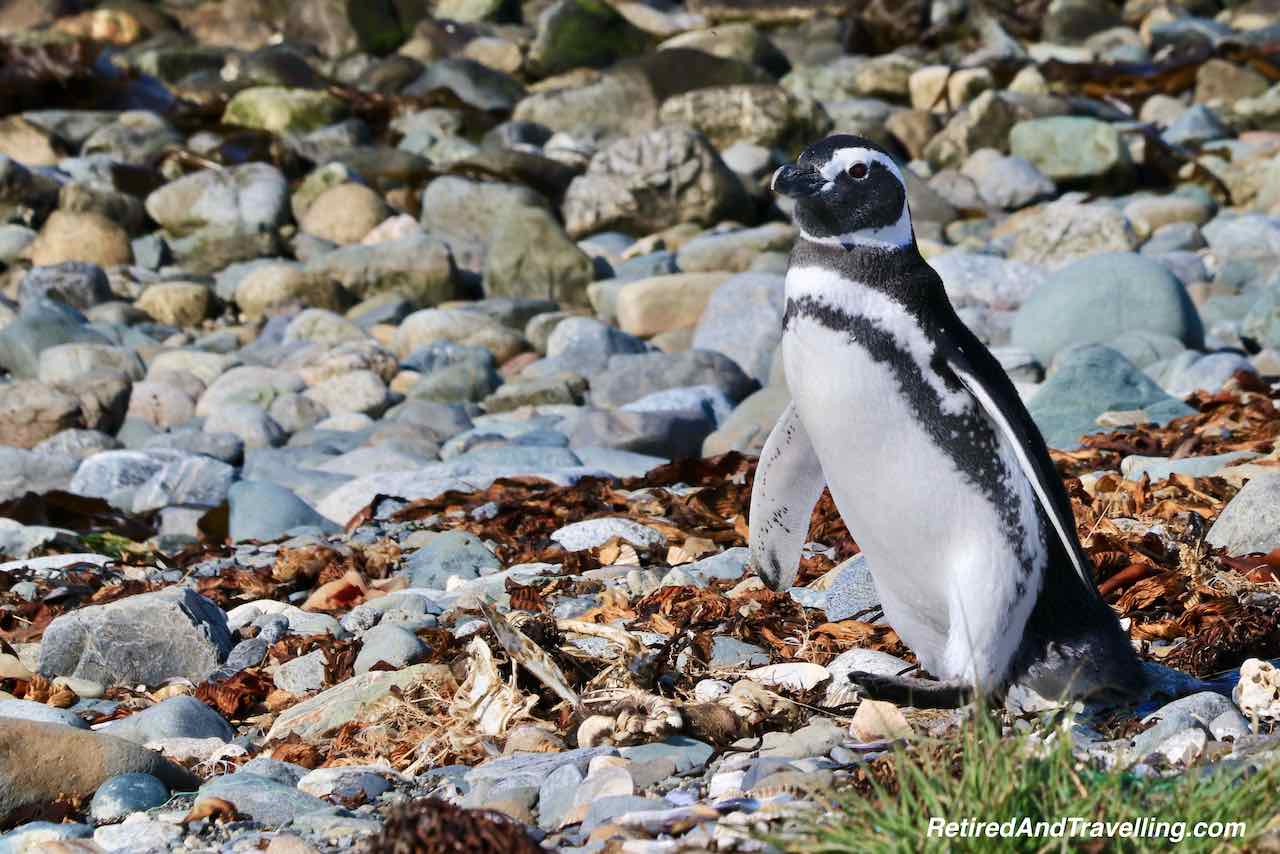 We climbed the hill towards the lighthouse. Penguins were all over the grass area. And in many spots, we saw them dug into holes. 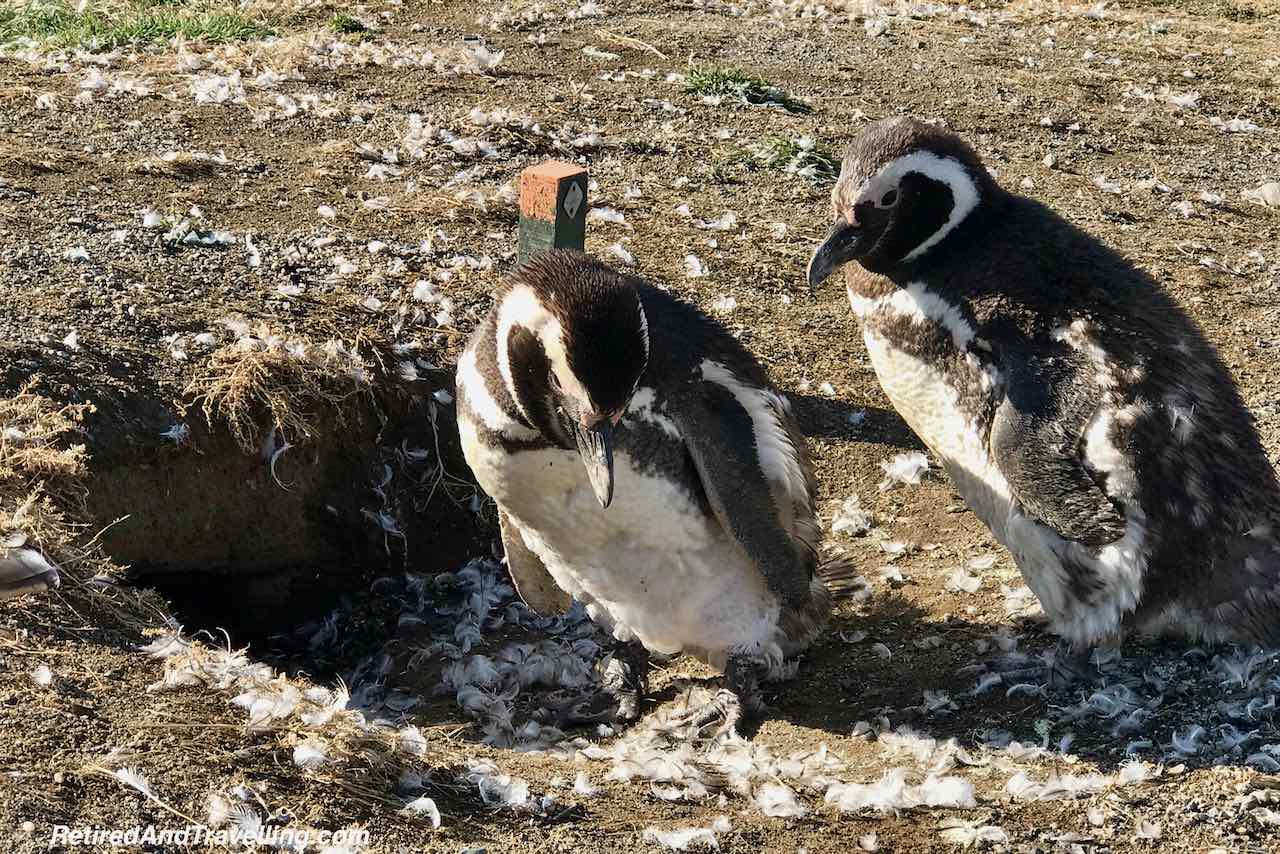 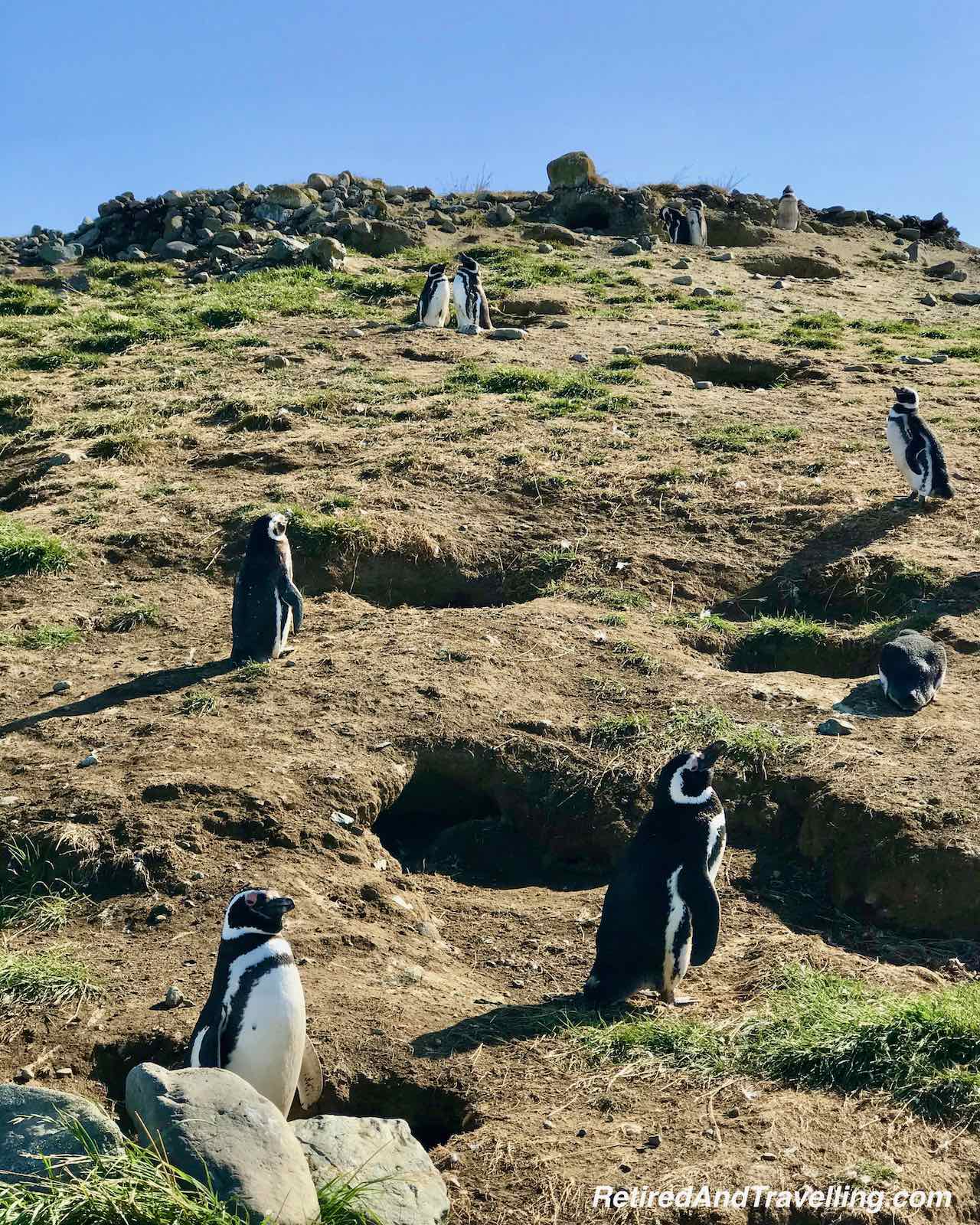 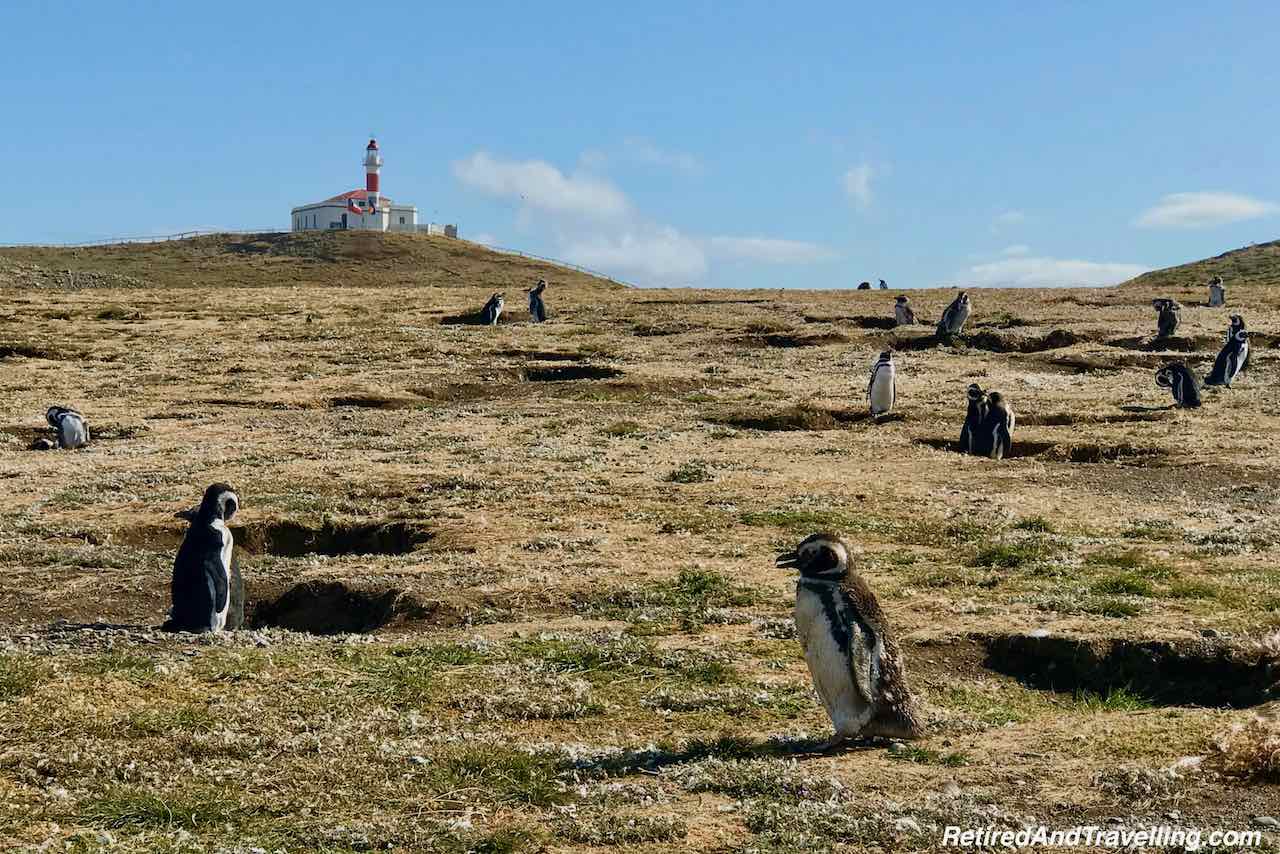 The molting penguins drew our attention. We saw various stages of molting over the head and bodies of the Magellanic penguins. At that time we did not know they were waiting to resume normal life after their new plumage appeared! 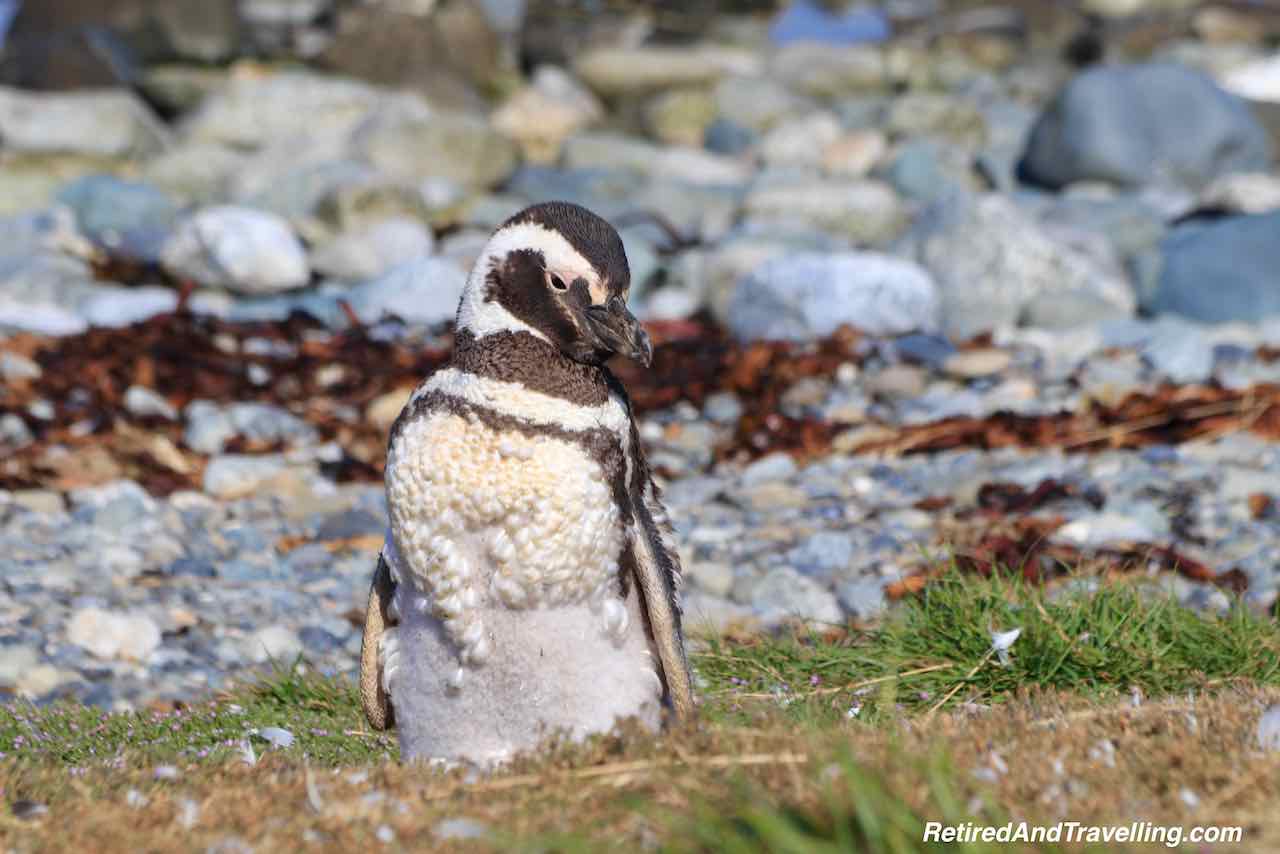 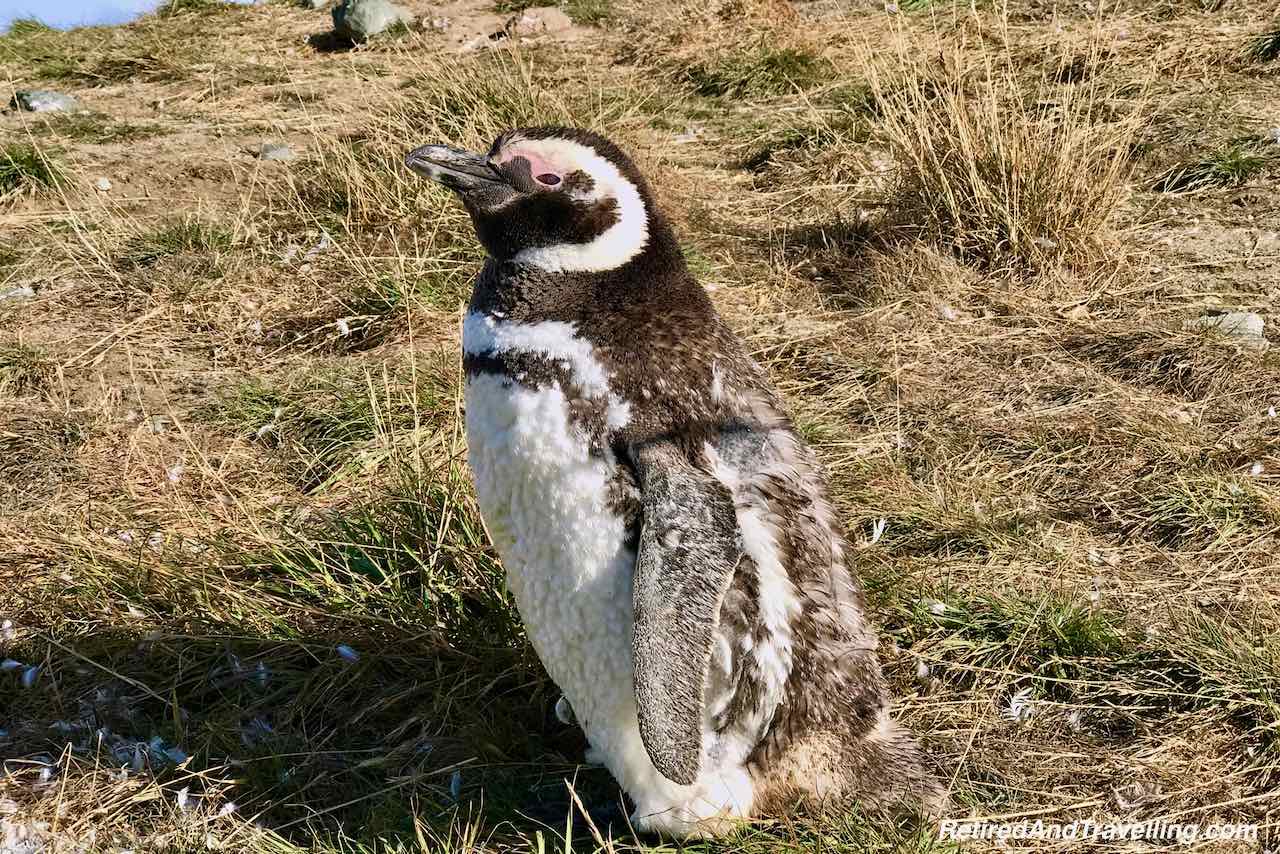 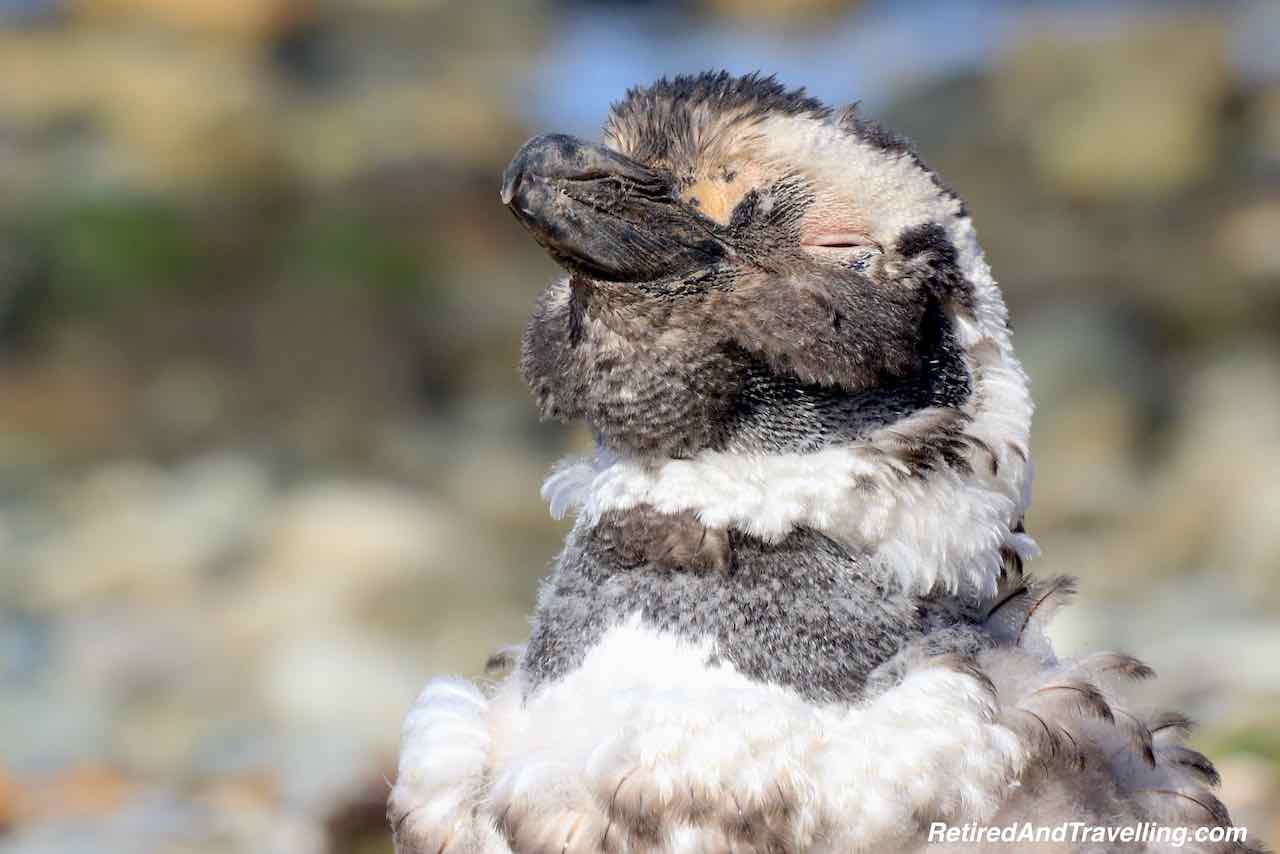 We moved around the site at a fairly leisurely pace. It left us lots of time to stop and we enjoyed Magdalena Island for penguins. 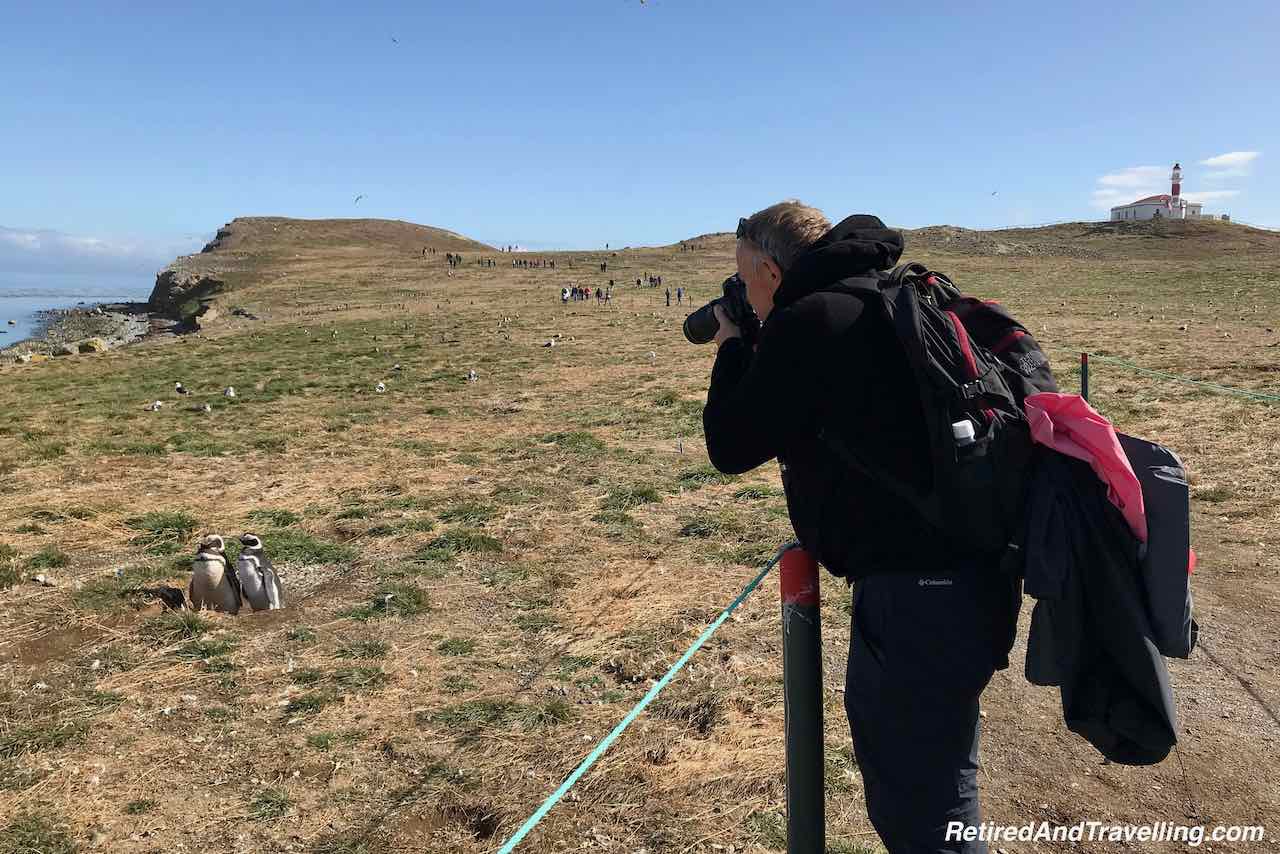 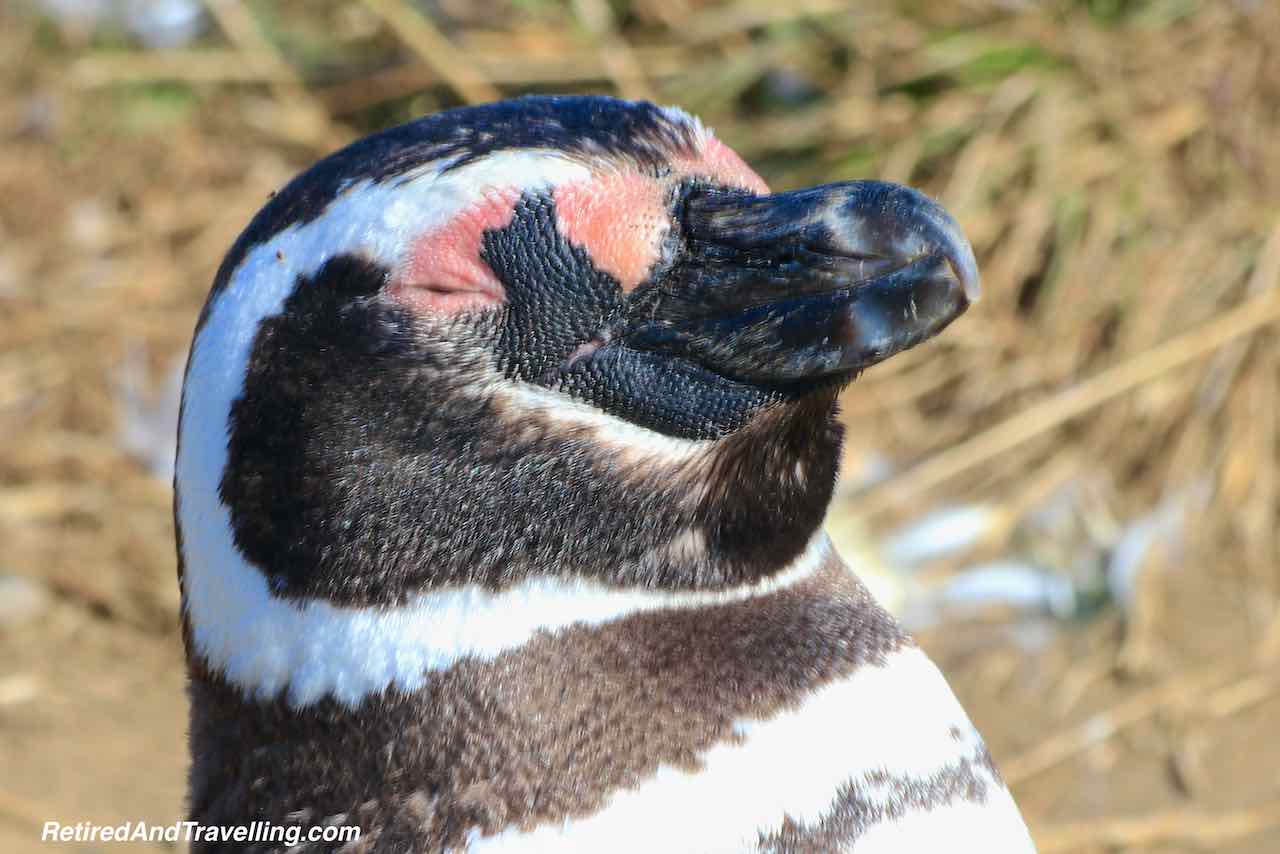 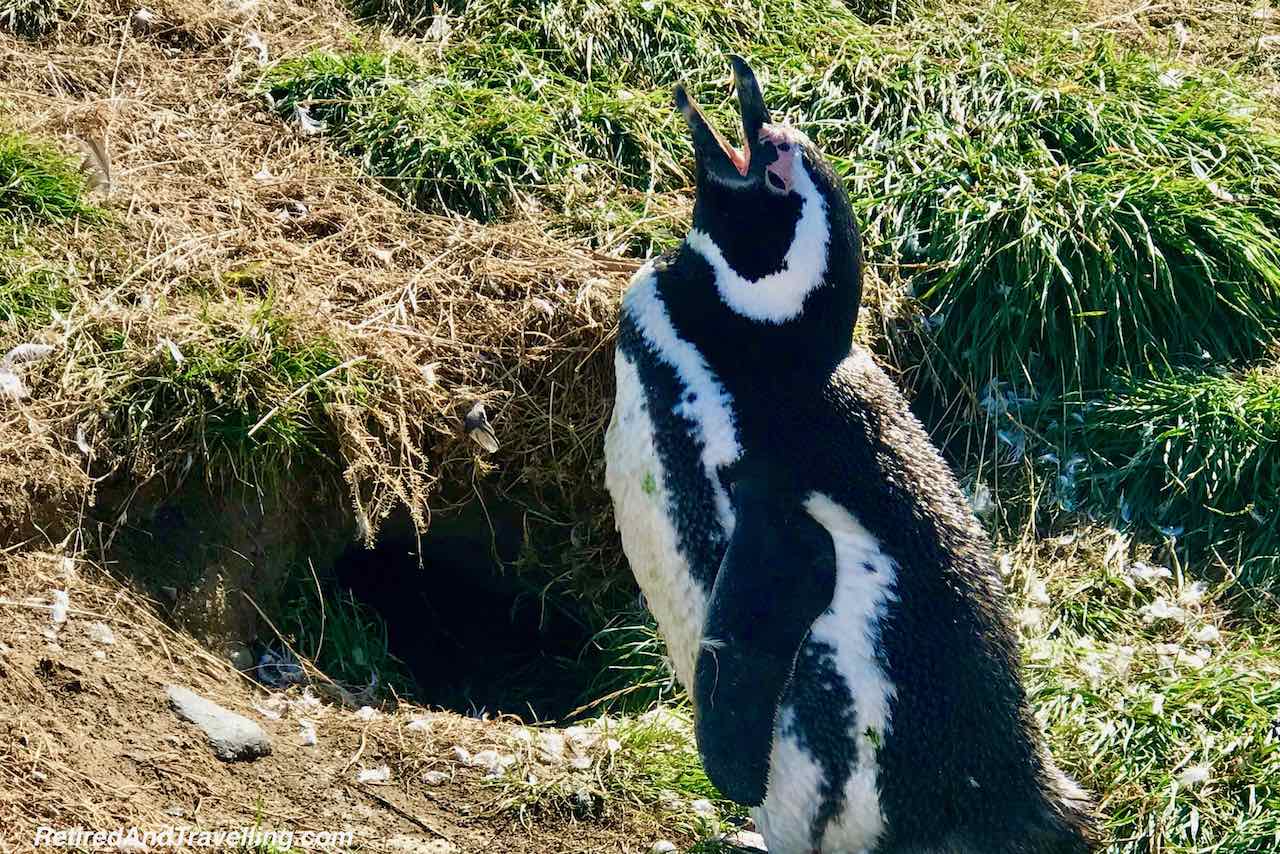 We were so glad we visited Magdalena Island for penguins. It was fun to see a very different kind of penguin on this stop. We loved the variety of outdoor adventures we got as we cruised through the Chilean Fjords. Our next stop was a visit to the stunning Orsono Volcano.

Did you Magdalena Island for Penguins from Punta Arenas Chile? Where else did you find penguins in Chile? 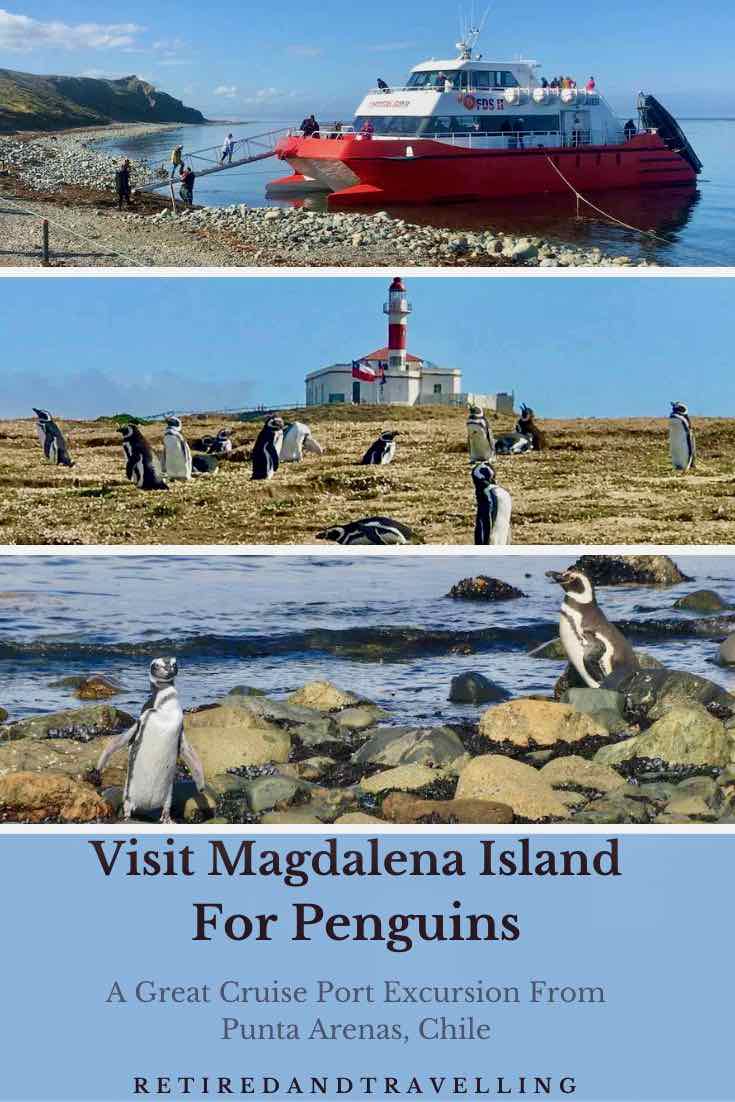 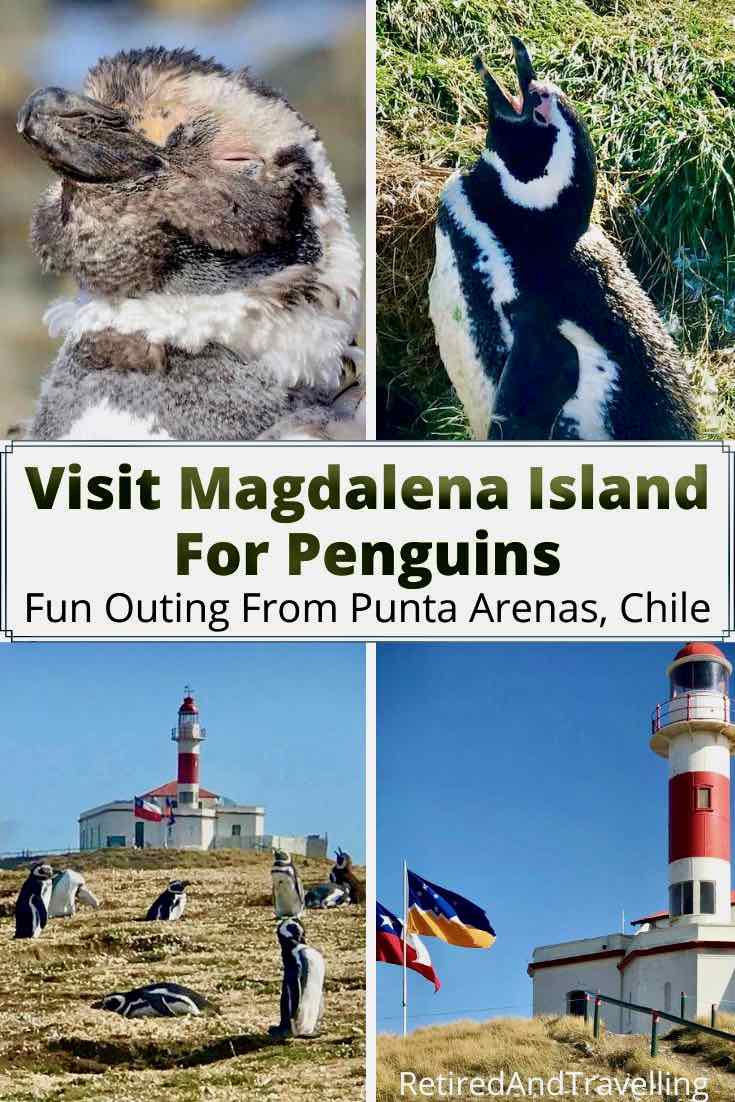 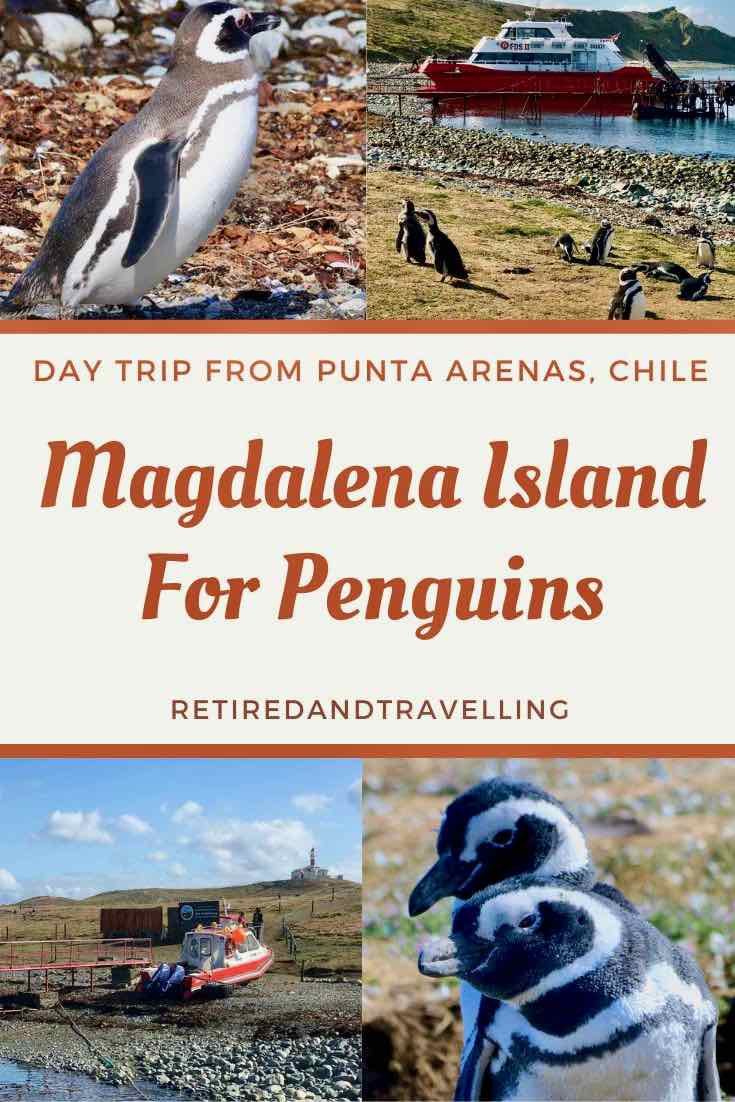 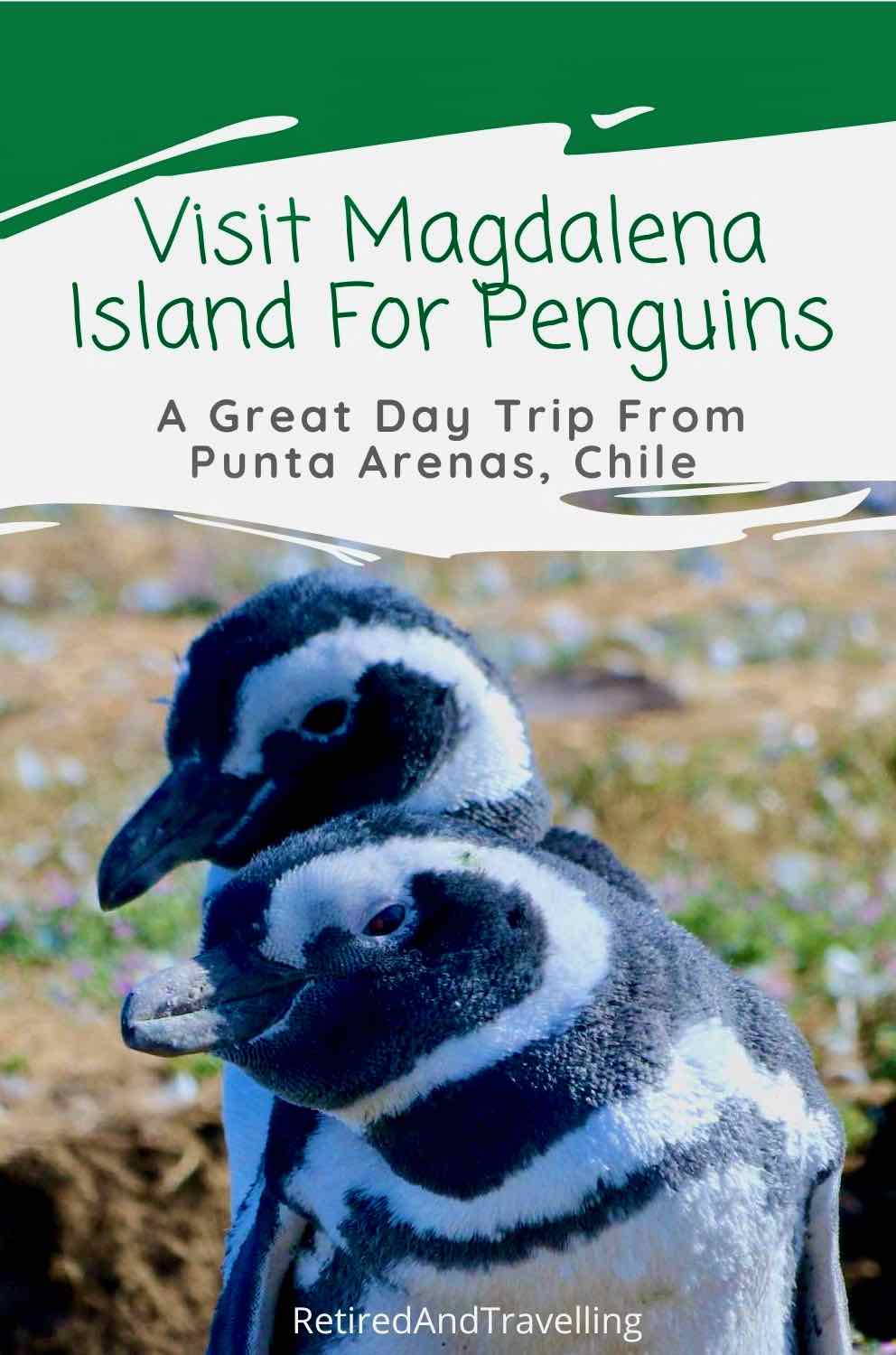 Visit The Nordic Countries In Summer

Two New Stops In Cuba We enjoyed a day trip in Havana on our holiday cruise to Cuba. The two other cruise port stops in Cuba were both overnight stays. And new places in Cuba […]

We would love if you could share this!
14
14
Shares