We had also considered going to Victoria on Vancouver Island for a whale watching trip.  But this meant a ferry from Tsawwassen and then a whale watching tour from Victoria. Ultimately we decided that the transit time from Steveston was reasonable and not worth investing the time and cost to start in Victoria.

David did his research on options for whale watching from Steveston and decided we would go with Vancouver Whale Watch.

We were lucky on our 4 week west coast trip the previous year and went whale watching around Monterey.  We got a great display of whale fun. Vancouver Whale Watch provided a return trip guarantee if they did not see any whales.  But we really wanted to catch them on the first trip. 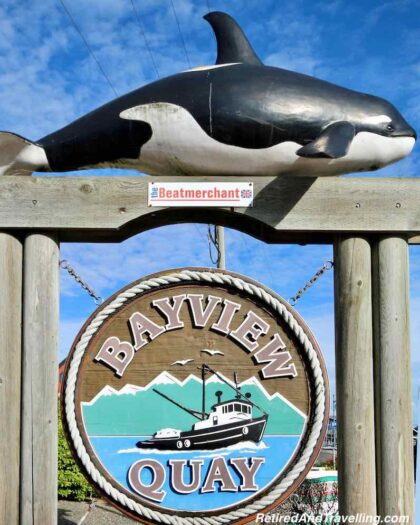 The route to Steveston from Vancouver was against rush hour traffic, so it was a quick 40 minute trip. We needed to be there in advance of our tour time to fill out the waiver and any other paperwork not done at booking time. We took one of their bright yellow waterproof jackets just in case we did not bring enough layers with us. Putting the parking pass in the window of the car we headed and found  the whale watching boat. 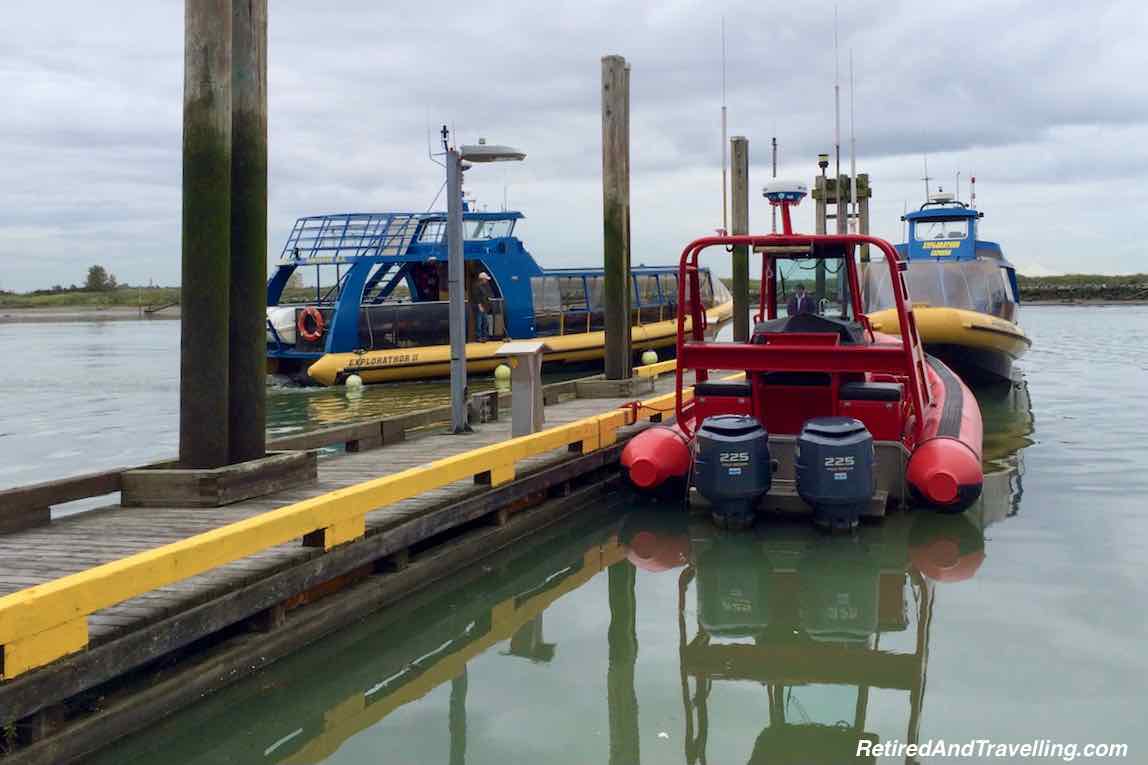 It was easy to see the whale watching boats at the dock. There were two styles – the mostly enclosed larger boats and the open zodiac style boat. It was more up close and personal in the open boat.  But we were happy when we were loaded onto one of the two boats they filled for that day. I was quite amazed at how many people turned up on this weekday at the end of September.

We motored out of the Steveston harbour and headed towards the US San Juan Islands. We had two days of storms before our whale watching day.  So the day was still a little grey when we pulled out of the harbour. But the storms left us with the flattest seas I ever saw in open water.  Technically they were rated sea state 0 – mirror calm! 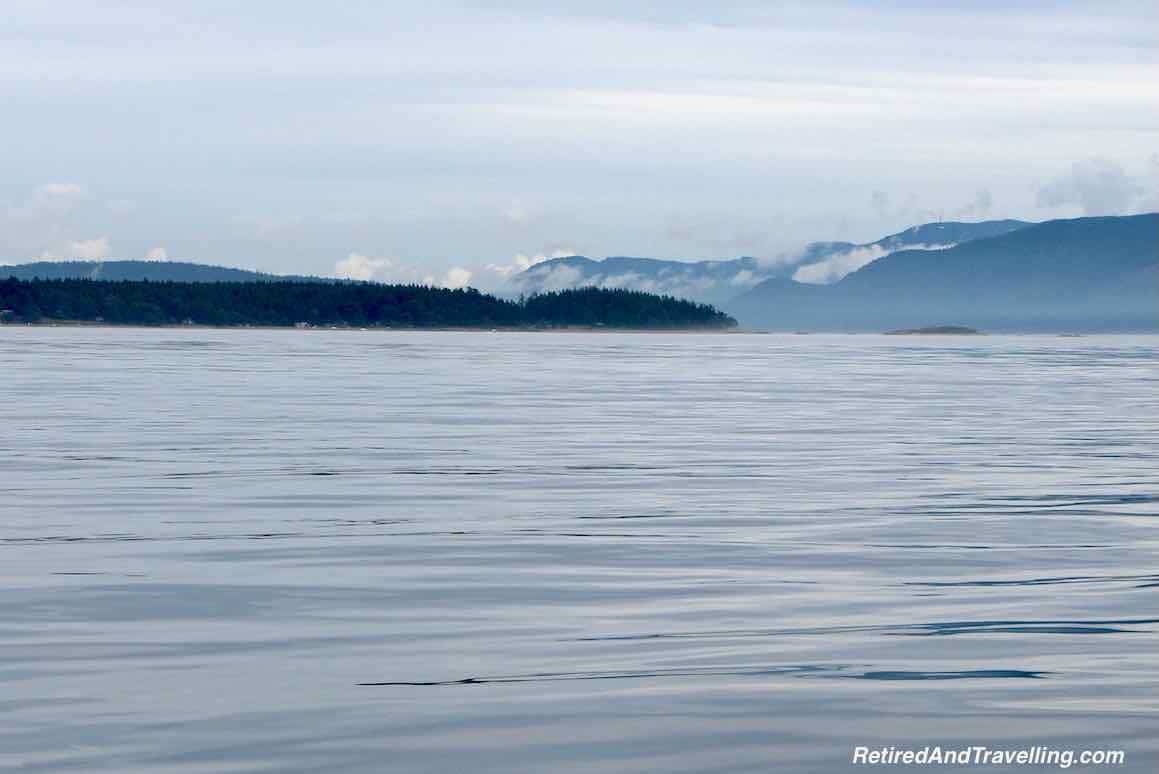 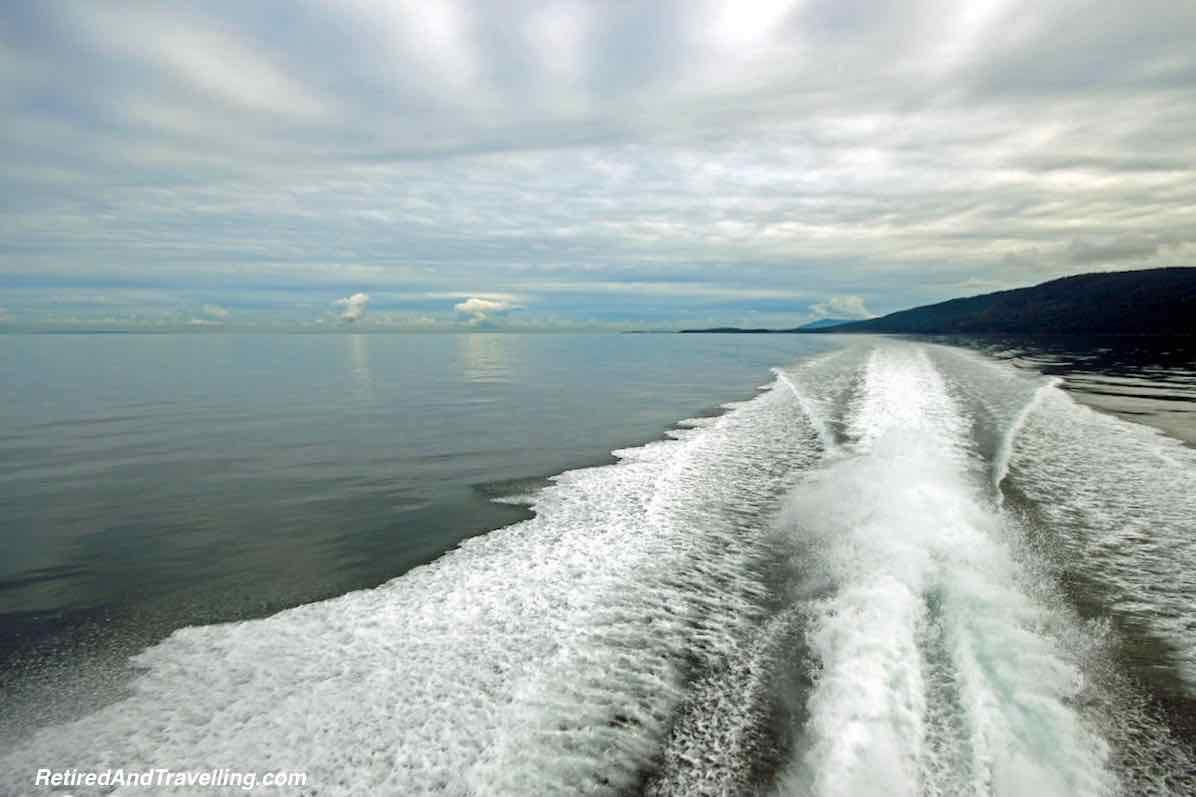 The first stop that Captain John targeted was for a Humpback Whale. This one was spotted moving ever so slowly and he was right where he was expected. We pulled in with the other boat from Vancouver Whale Watch and waited. Our guide Joan said to watch for the blow! 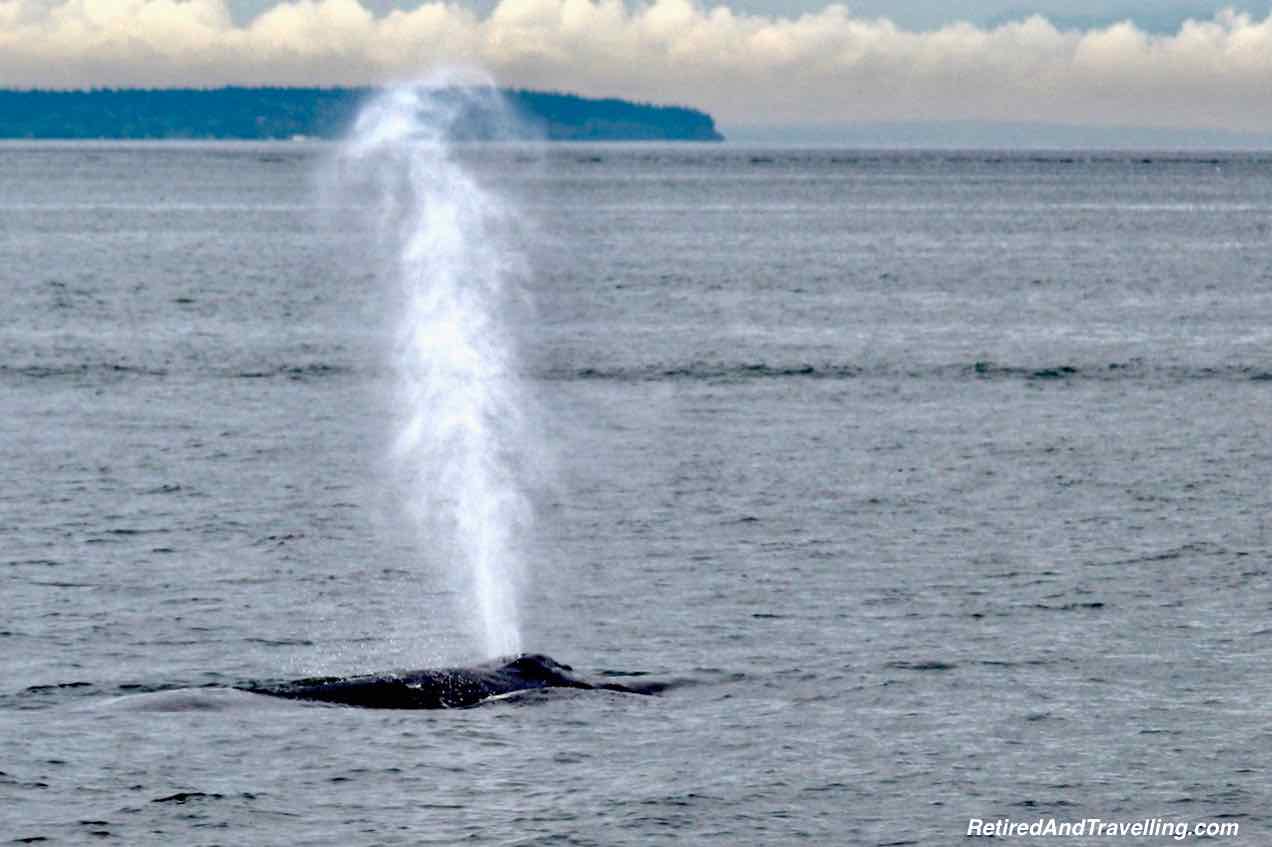 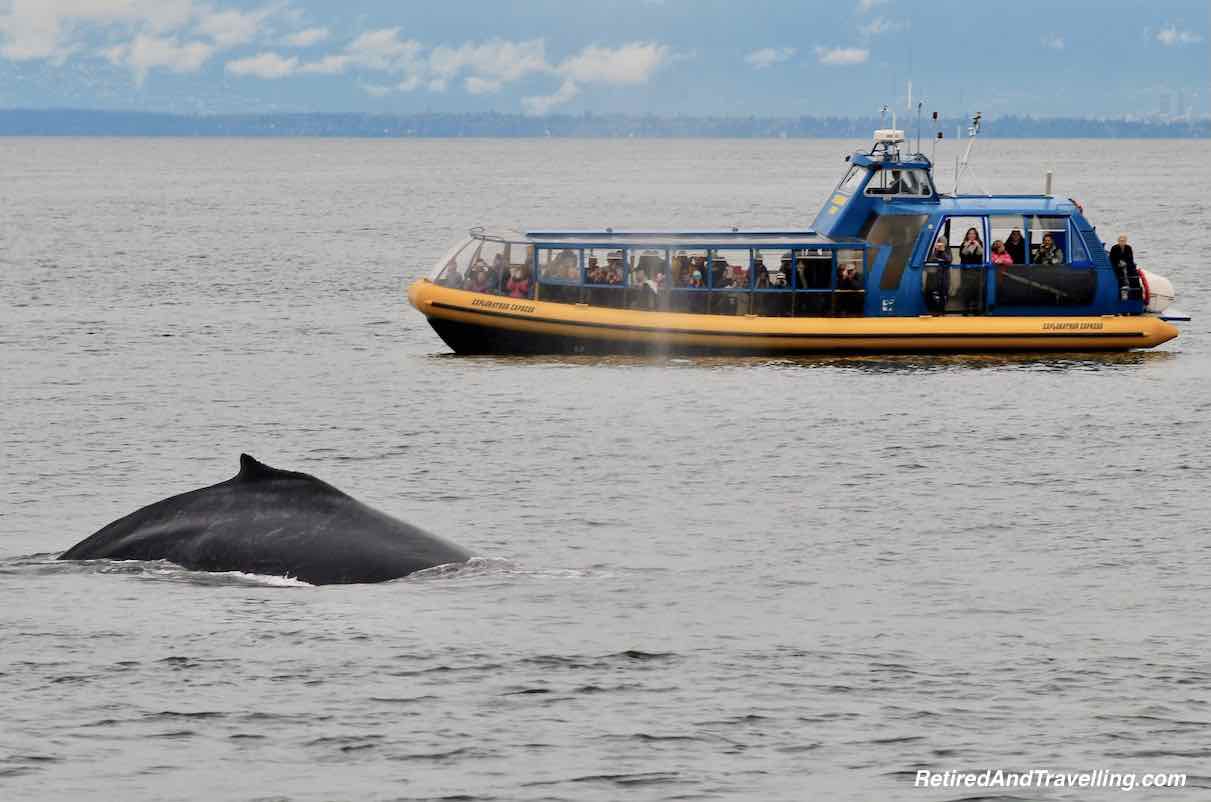 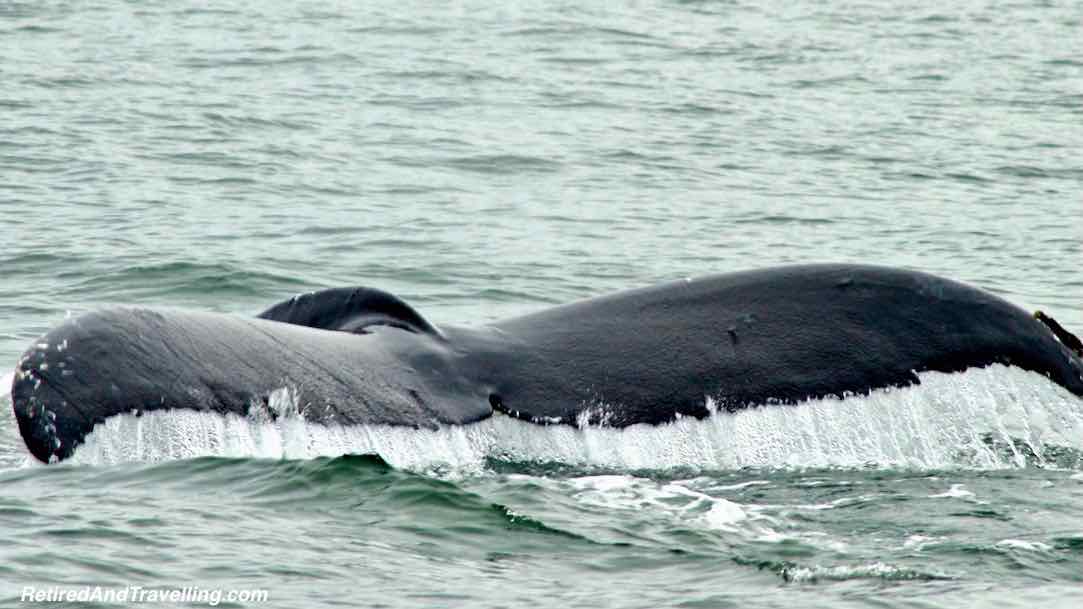 We stayed for about 30 minutes and watched the Humpback Whale bob up and down.  Then he dove for 5 minutes or so as we scanned the horizon for his return. On the return trip, we caught up with this same Humpback Whale.  He had moved only a small distance while we were gone.

Other Sights In Active Pass

Captain John got us back underway but then pulled into a small cove in Active Pass. He moved us in a circle to see the two attractions he had spotted.

On a shallow rock, we saw a large group of sea lions as they soaked up the sun. On the shore, those people with great eyes or a good telescopic lens saw a bald eagle in the tree.  Seeing the one lone bald eagle was interesting but later on this trip we saw dozens and dozens in the Harrison Hills area! 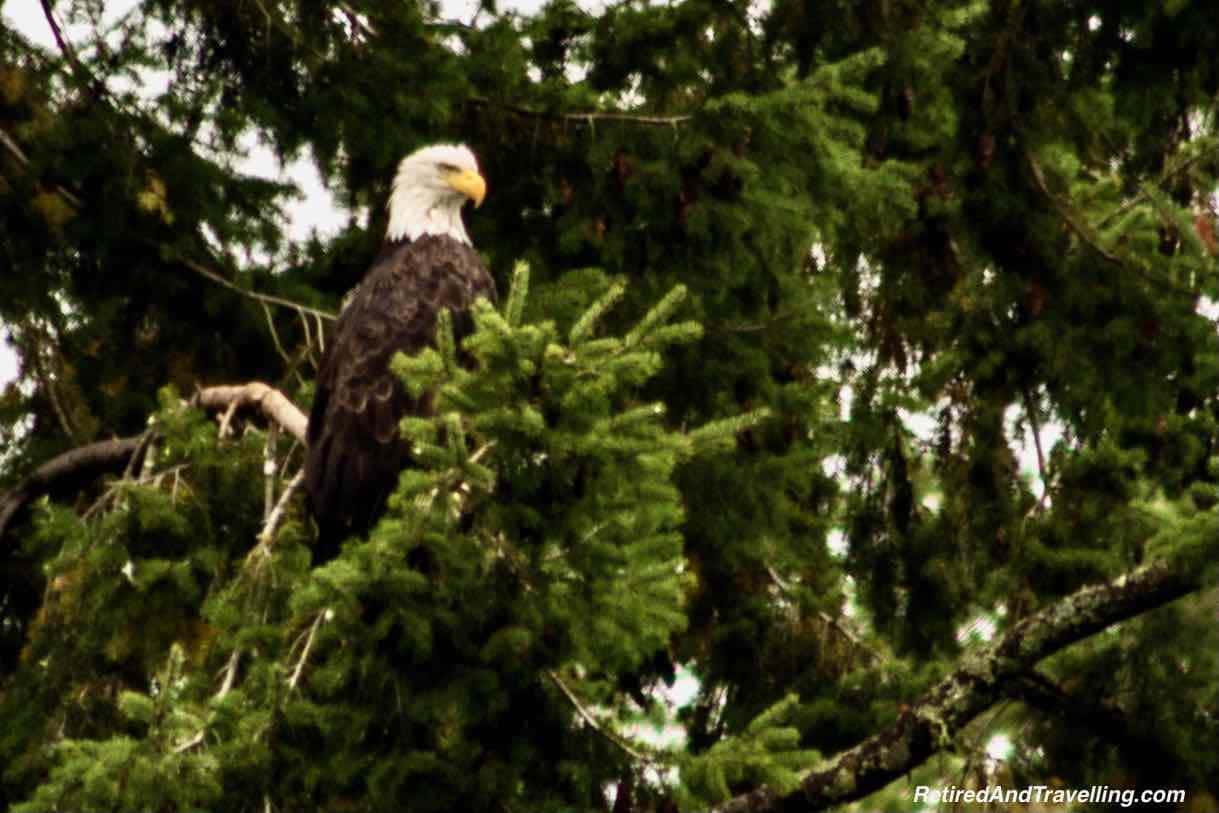 As we approached San Juan Island, Joan came up and told all of us Canadians that we might soon pick up U.S. cell phone towers. With Canadian cell phone roaming rates so high, we all opted to put our phones on airplane mode and avoided unwanted phone charges.

We were well bundled up and took an extra waterproof coat on the boat. But as the day went on, the grey skies cleared and we found it quite reasonable in the enclosed boat. When David went up on the top open deck to get pictures, he needed an extra layer.  It was worth it for the view. But we were glad we had not done the whole trip in late September in an open zodiac style boat!

The Pod of Killer Whales

We had no trouble knowing when we reached the spot where the Killer Whales (Orcas) were spotted this day. With the number of boats being a bit smaller at this time of year, it was sometimes a bit of a question whether someone will spot the whales. But this day, every captain gave the same coordinates. 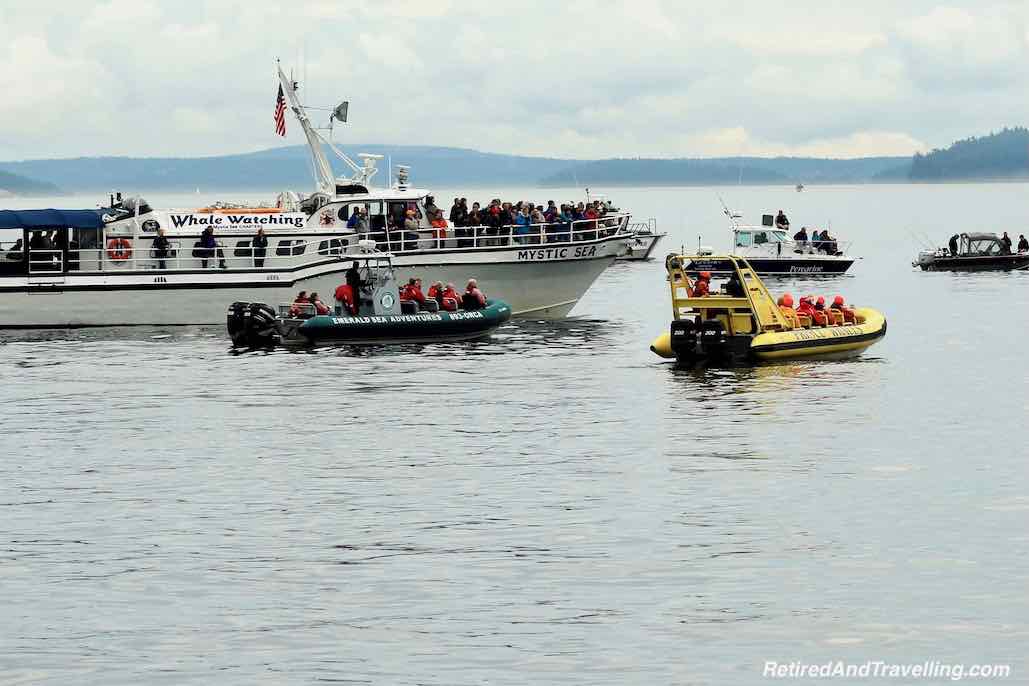 The boats ranged from sizes as small as the open zodiac style boats, to mid-size boats like we were on, to much larger tour boats from Victoria and the US. The boats kept jockeying for a position close to the pod of whales every time they surfaced. Most of them were careful to keep within the required spacing and later in the morning we even saw a US Coast Guard vessel in the area that further kept the tour boats in line.

While we were not in the boat where the whales surfaced right beside them, we were able to get great views of the whales (although we never did see a full breach). The people on our boat crowded to the open windows or open decks as the whales appeared.  The captain moved the boat regularly and got the whales first on one side and then on another. 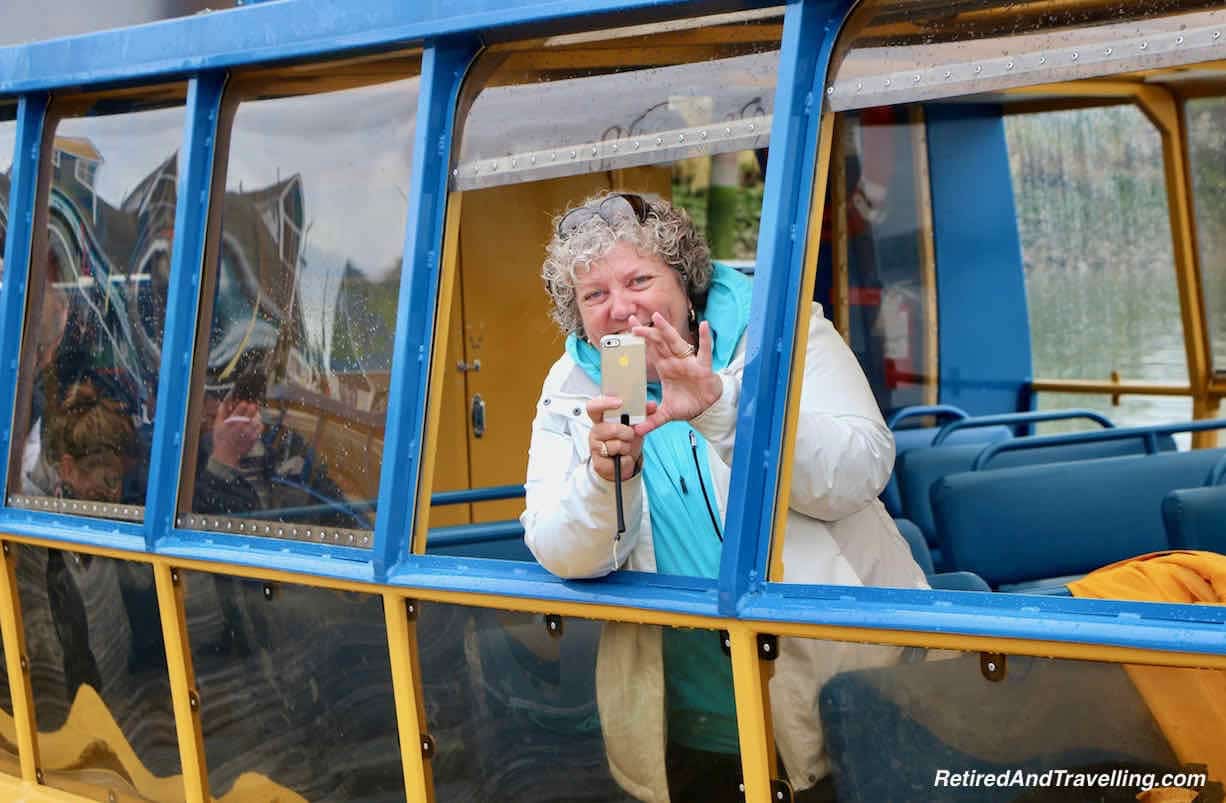 We stayed in the area for over an hour while we watched the Killer Whales surface and dive. We saw at least 6 different whales in a range of sizes and ages. Joan explained how they could distinguish different whales (by tail markings) and how the whales were named to keep track of lineage. 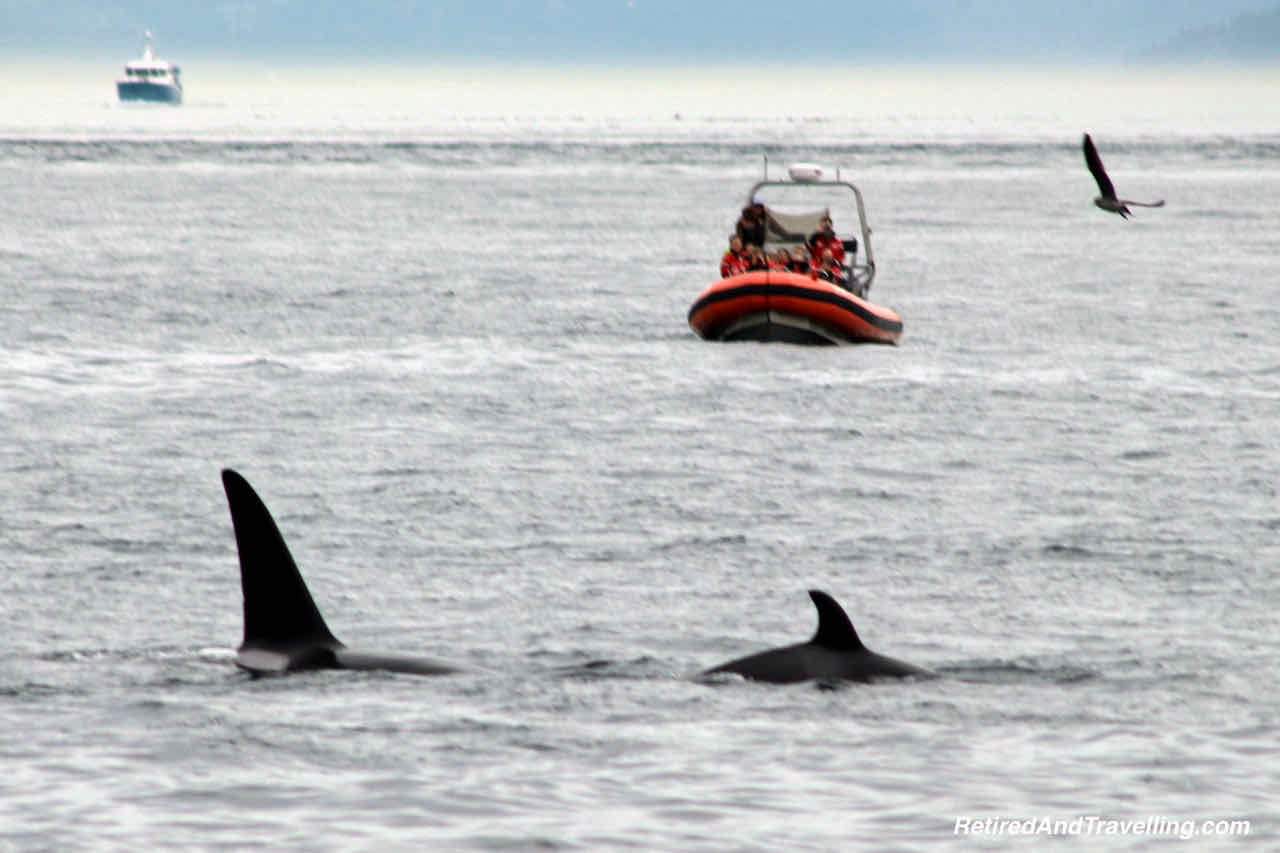 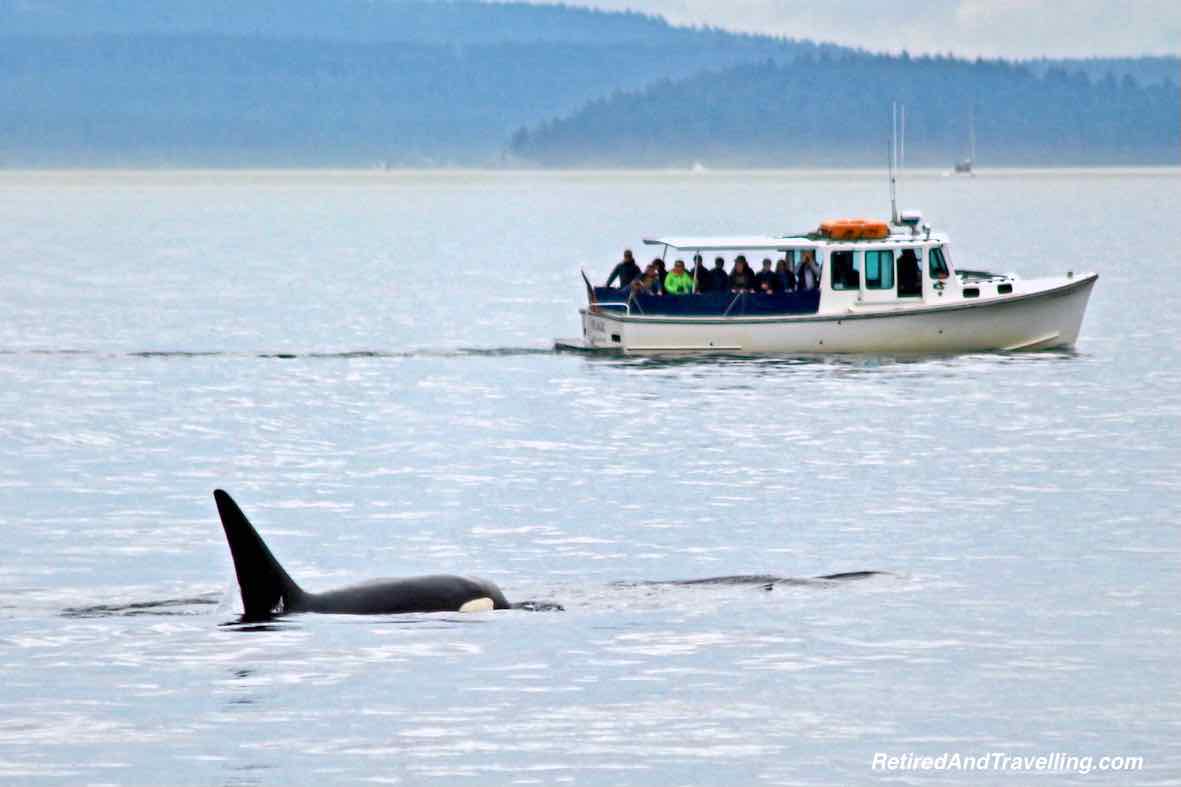 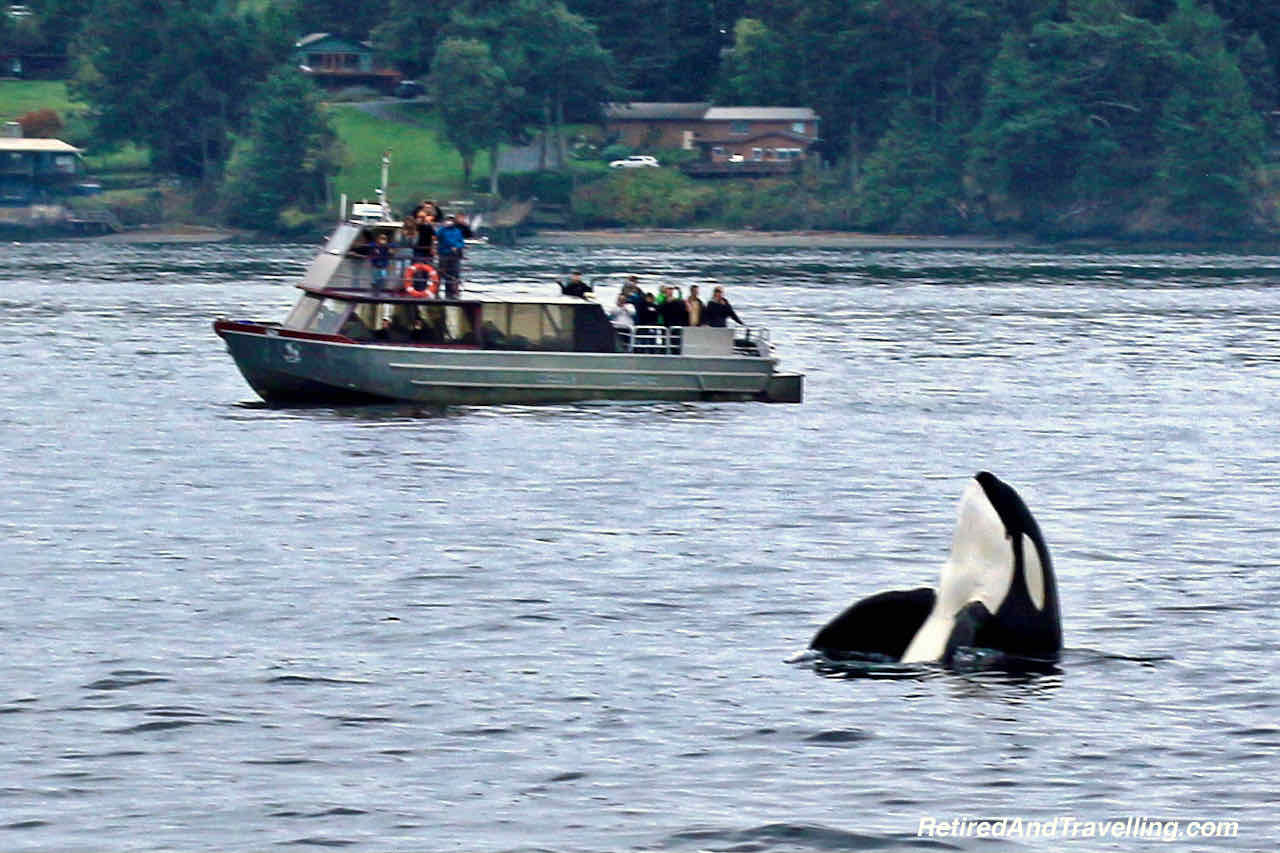 And More Natural Beauty To See

On the way back we took a slightly different route and we stopped to see the amazing sandstone cliffs on the side of one island. We saw where the dimples in the sandstone started and saw the portions that wore away after many, many years. Those with good eyes even caught sight of a nested peregrine falcon. 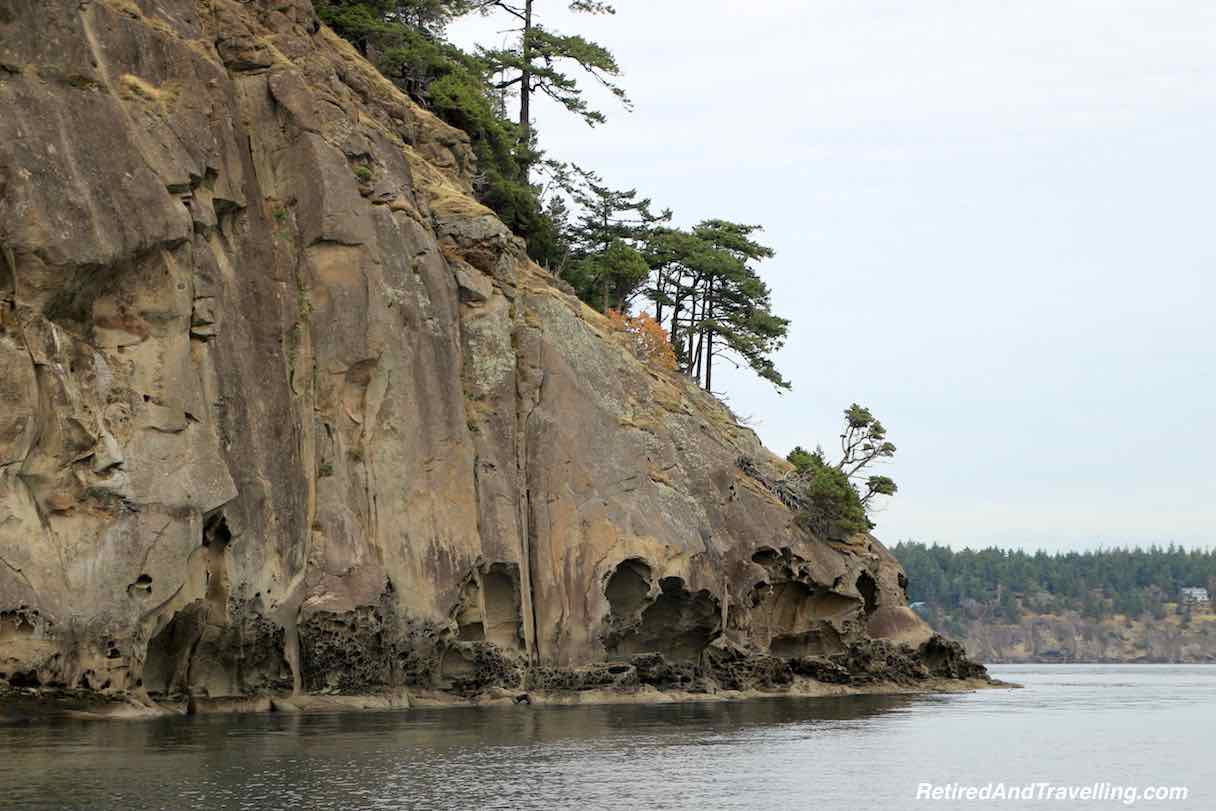 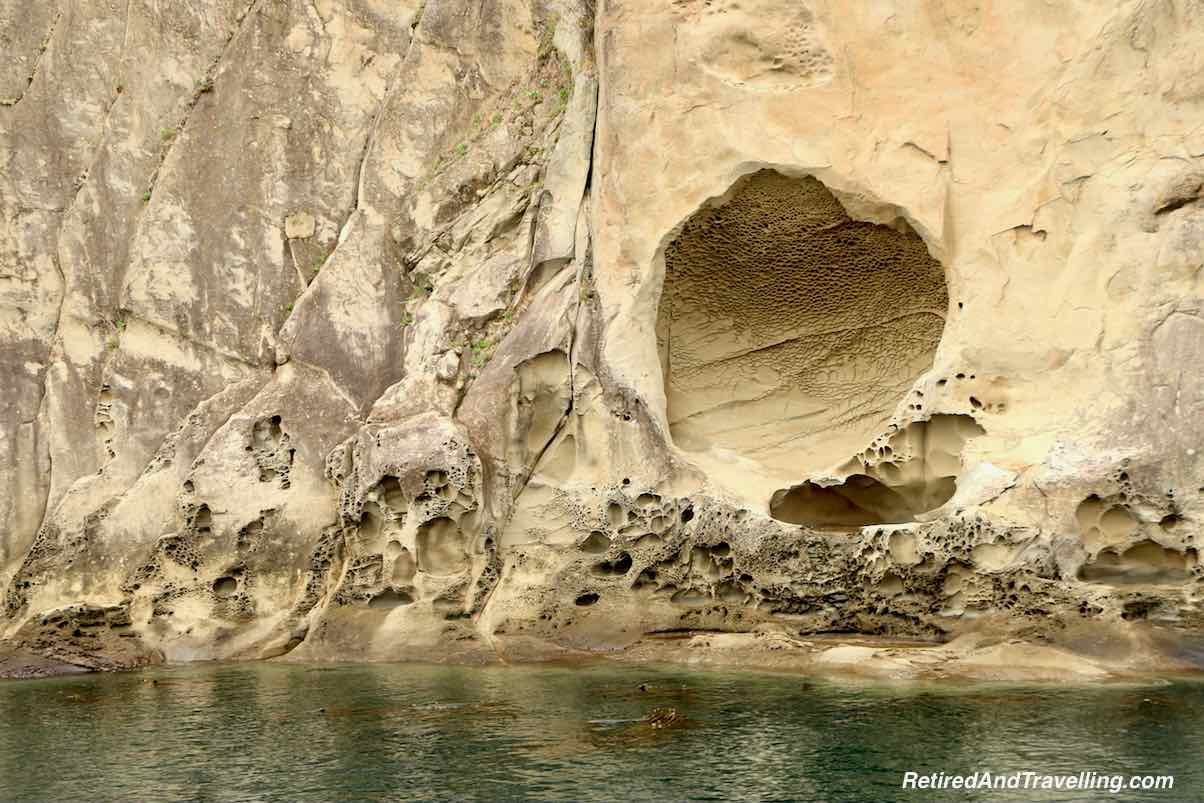 The final spot that Captain John stopped at let us see a small island covered with lounging and playing sea lions. We saw a lot of sea lions when we travelled down the west coast.  But it was always worth a look to see the antics of these creatures. 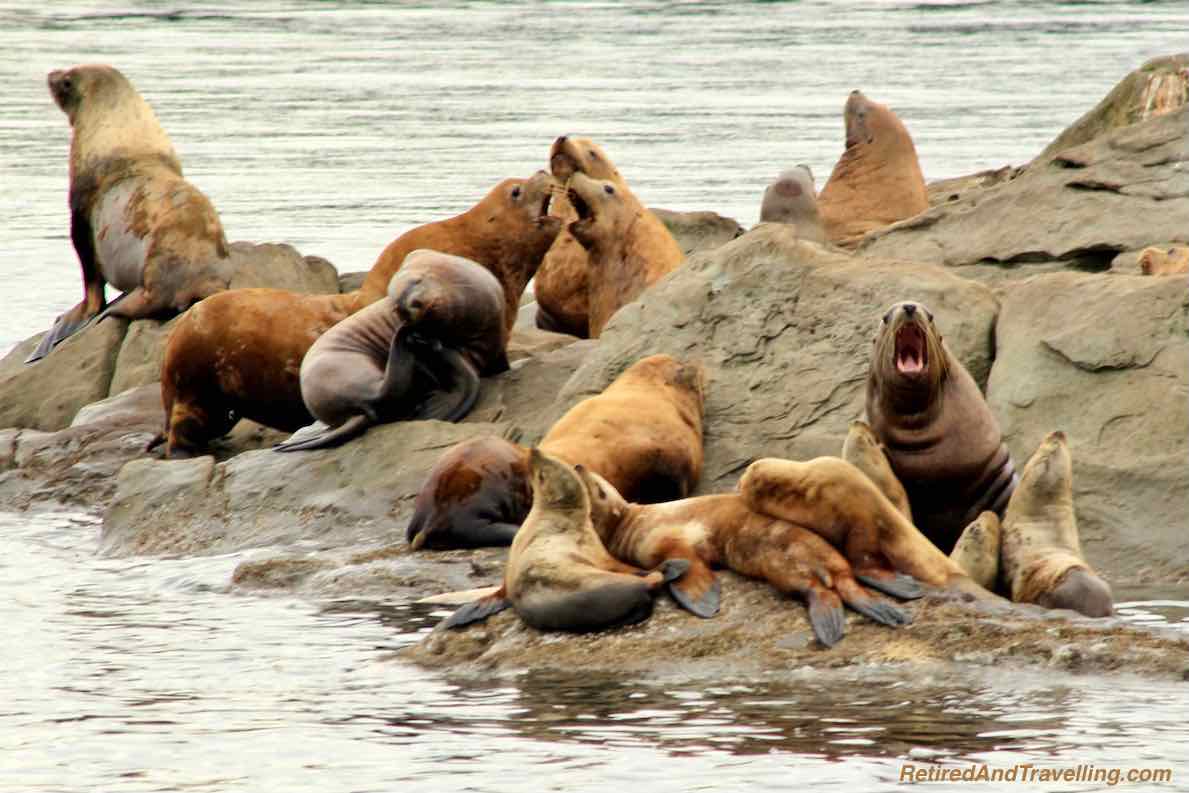 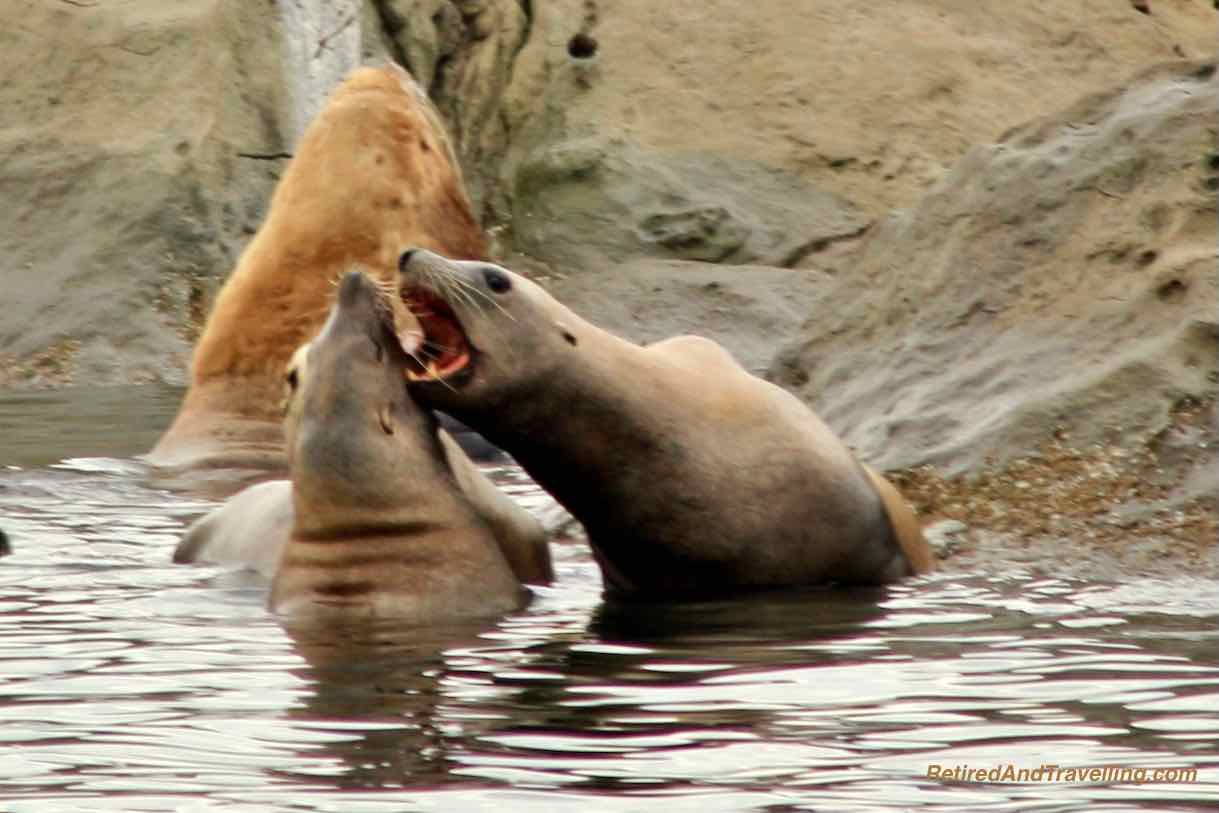 We were out for a full 5 hours whale watching from Steveston by the time we pulled back into the harbour. We saw an amazing range of wild life on this trip. Our route and sightings were well documented on the wall chart to record our adventure! 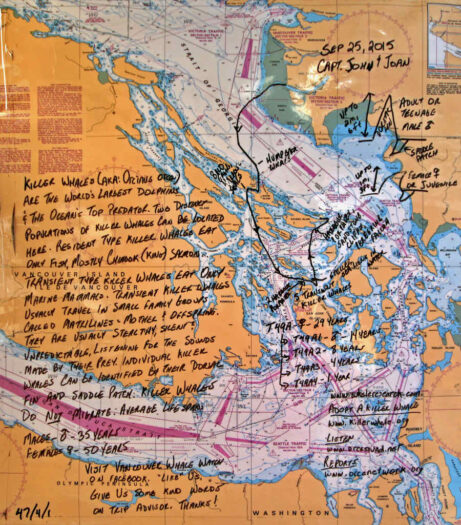 It was an awesome day to visit Steveston and go whale watching!

Have you gone whale watching from Steveston when in the Vancouver area? Where did you leave from? Did you see other types of whales or wild life? 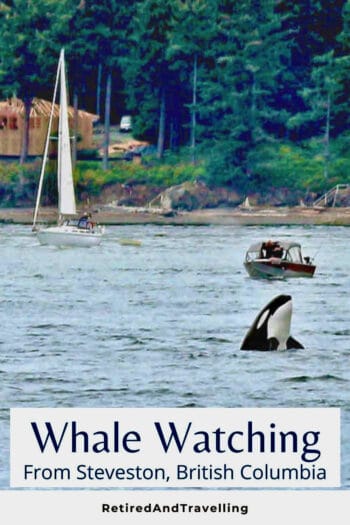 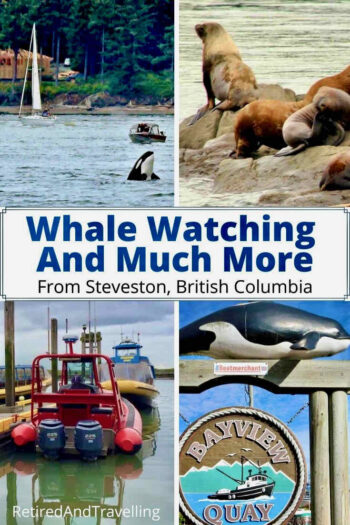