So Much Fun In Old Montreal

We had so much fun in Old Montreal on our stay.  The Old Port had so many different things to see and do.  And a cruise on the St Lawrence River gave us a different perspective on this great Canadian city in Quebec.

On our road trip to Eastern Canada, we started with a short stay in Montreal.  We planned a great pampering stay for our anniversary.  But on several days we still headed out and explored.

An Interesting Walk To The Old Port

From our hotel we walked to the Old Port area.  It was a beautiful sunny day and we found much to see along the way.

We found so much interesting outdoor art on our visit to Montreal.  On this walk we found more.  We stopped by the stairway to nowhere and wondered about the inspiration for this piece.  In the park we found some abstract pieces.  And even a colourful snake decorated a doorway. 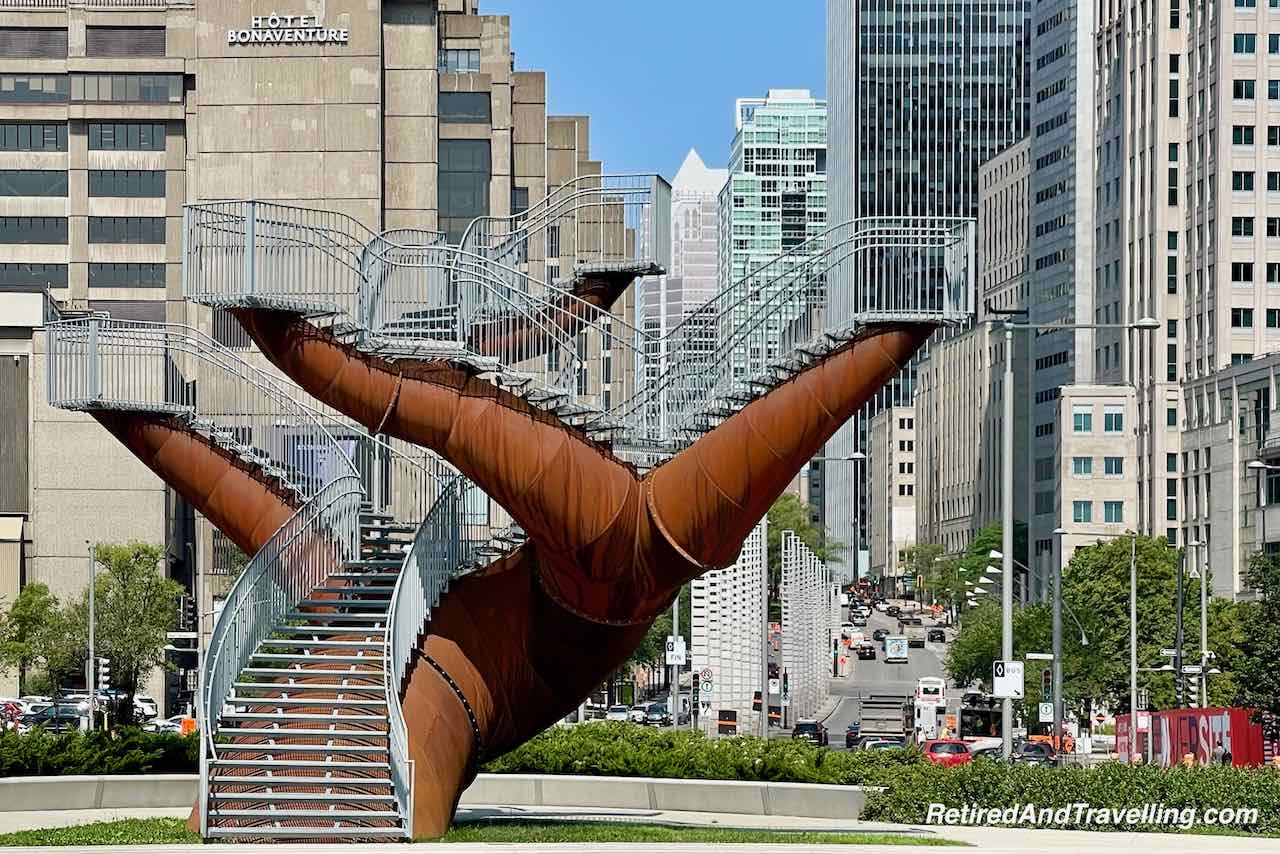 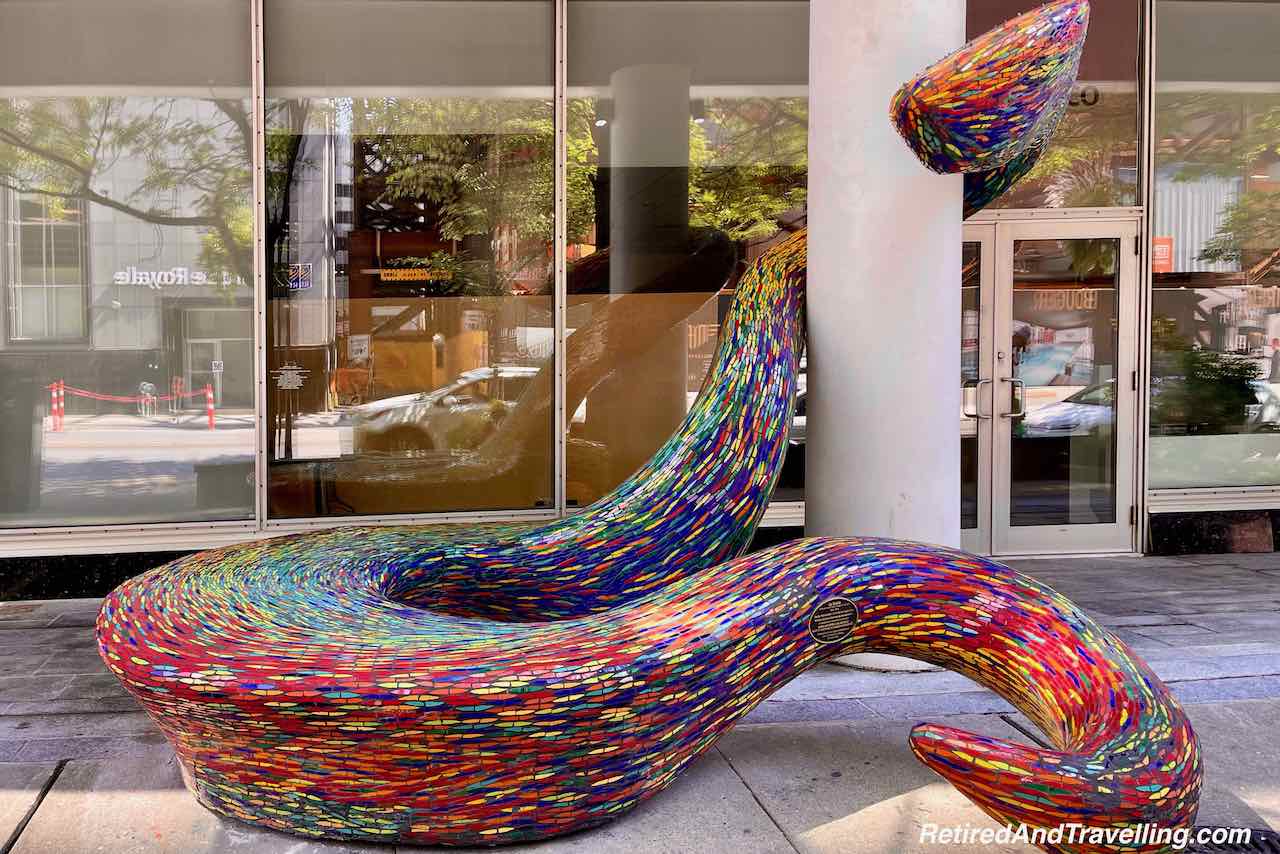 When we walked down the green space along Robert-Bourassa Boulevard, we saw an outline of a man made with white swirling lines (called “Source”) .  This was the second Plensa piece we discovered on this visit to Montreal. 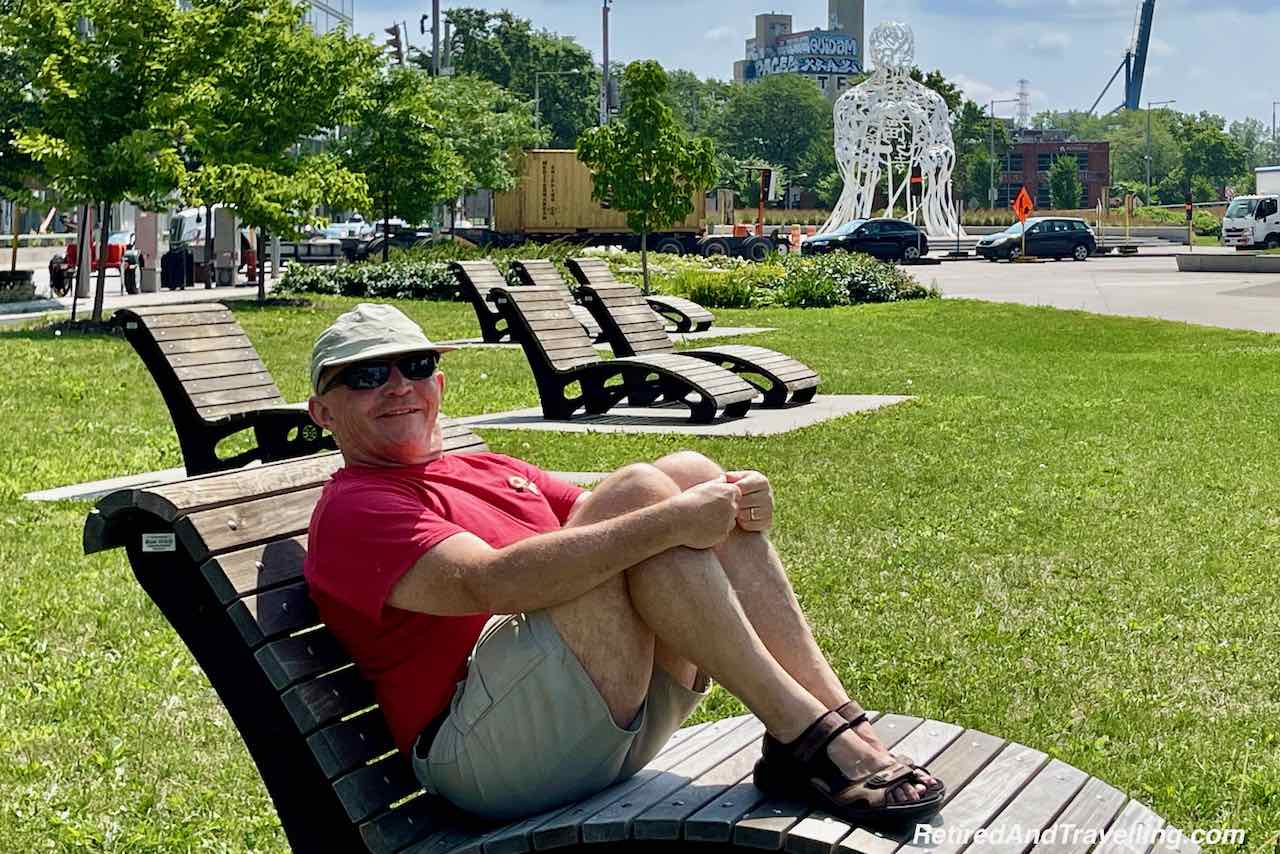 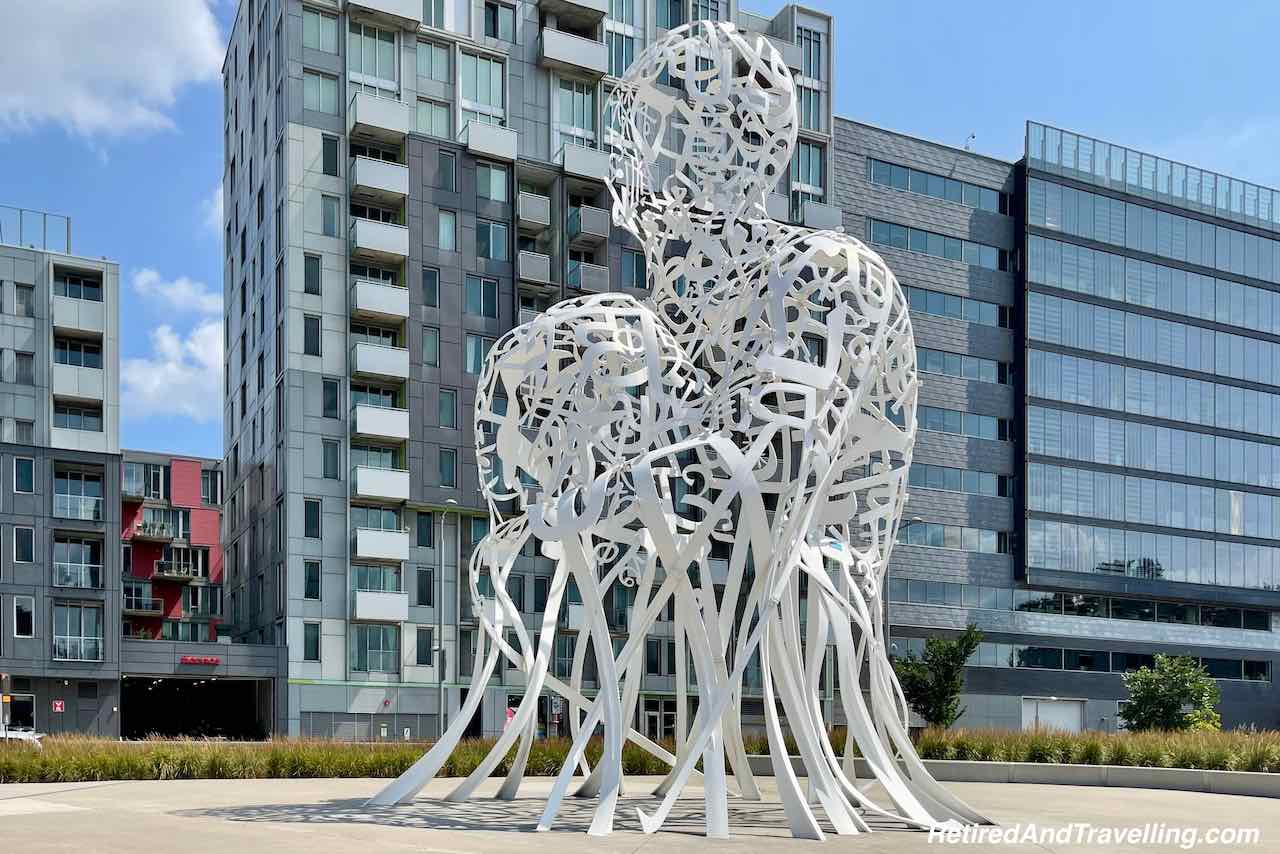 The colourful artwork was a great start to our day for fun in Old Montreal.

Wandering Along The Waterfront At The Port

We continued our walk and reached the Grand Quai on the waterfront.  Our boat tour on the St Lawrence River started from here.  But we were early and had lots of time to explore. 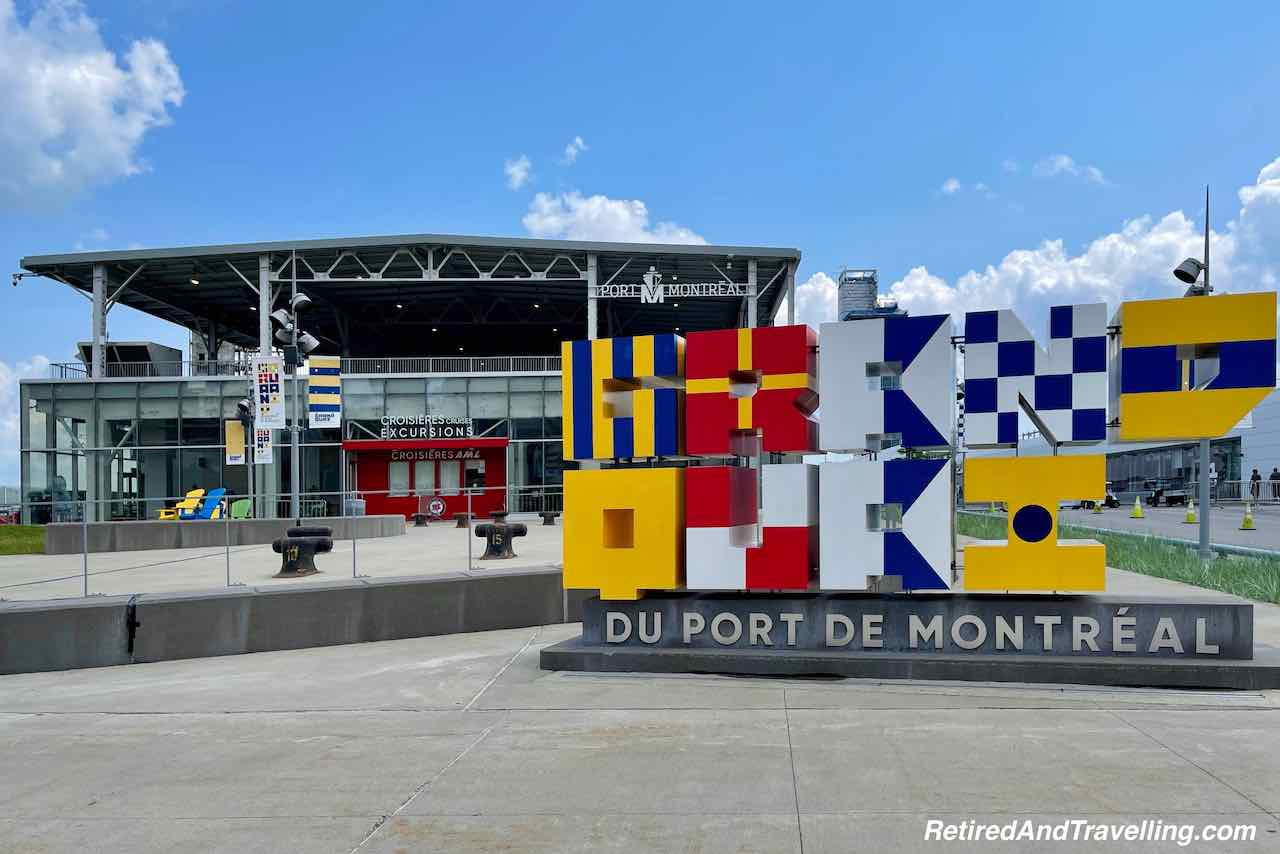 As we wandered along the waterfront, we found lots of things to see and do.  If we wanted to relax, there was a floating spa.  For education there was the Science Centre. 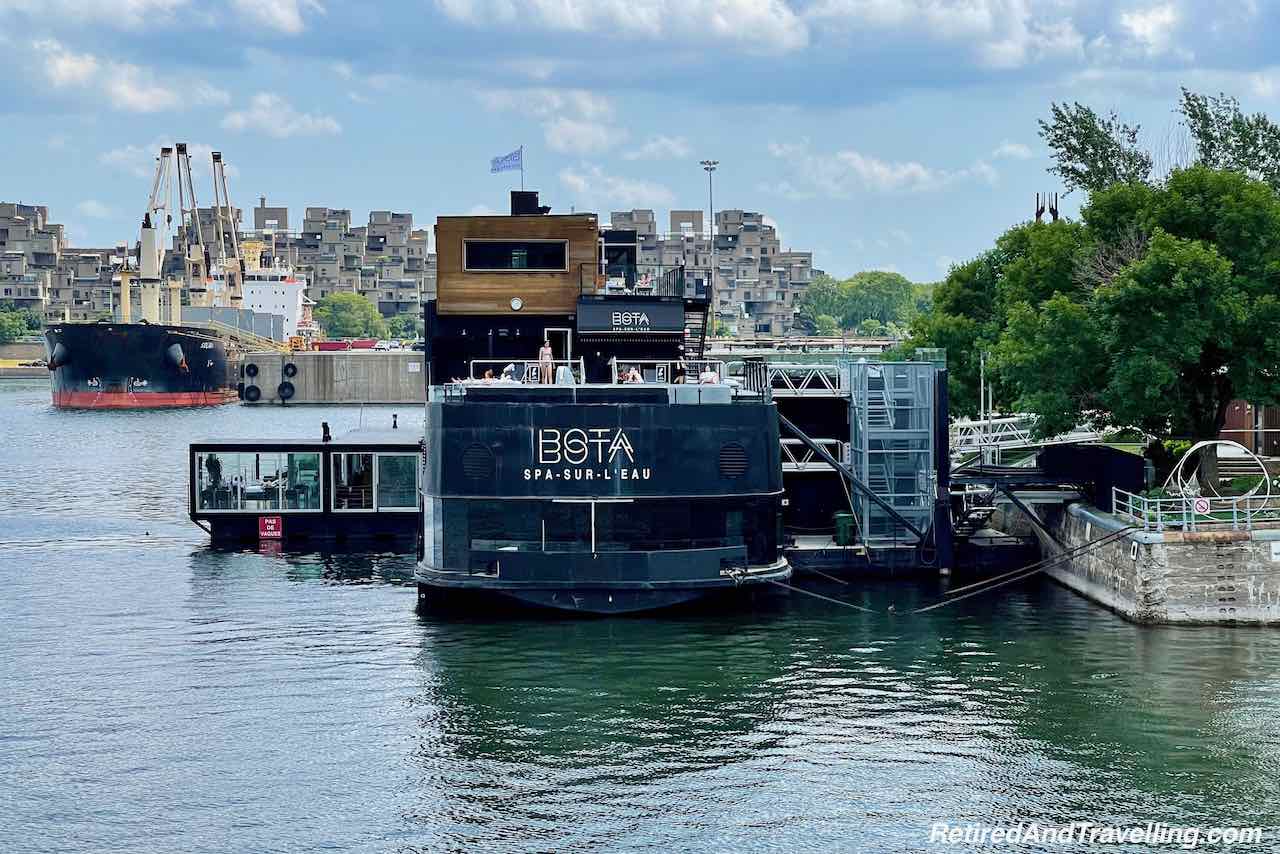 There were many different ways to get around the Old Port area.  We thought the pedi-bikes might be fun.  And if we had more time, we would have considered some fast fun on the water. 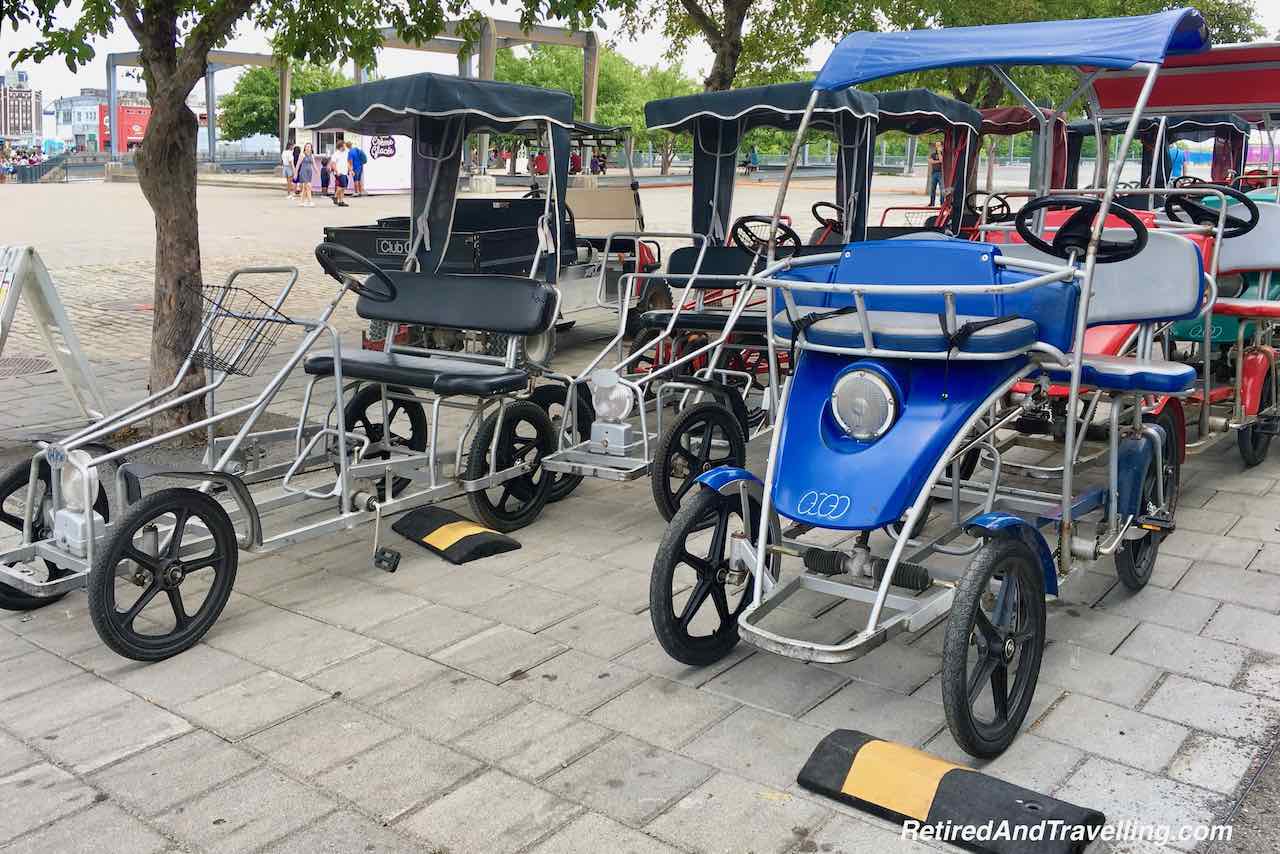 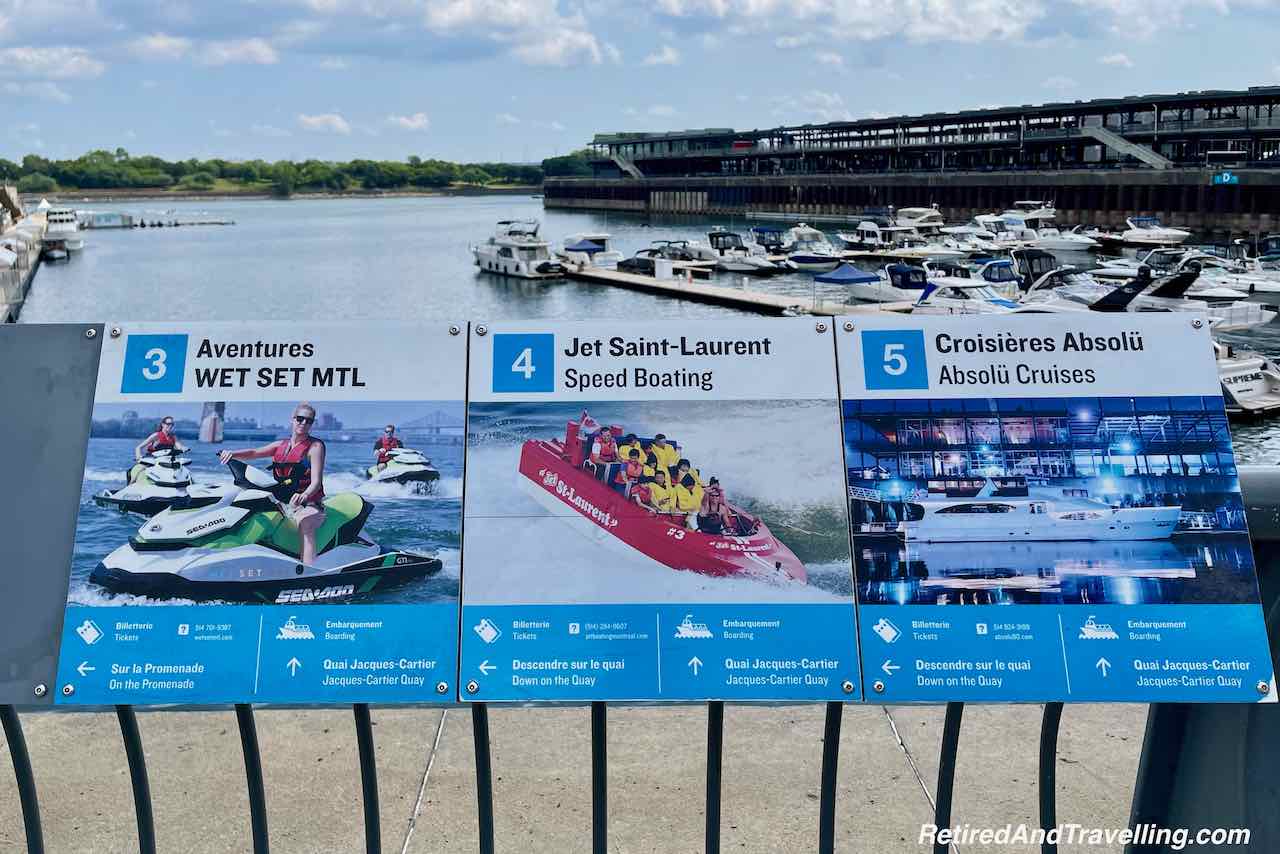 La Grande Roue de Montreal, a large ferris wheel was visible everywhere we walked along the waterfront.  We crossed over and went past the ferris wheel to the water and got a view down to the Sailor Tribute Clock.  Across the water, we saw the biosphere dome from the 1967 World Fair. 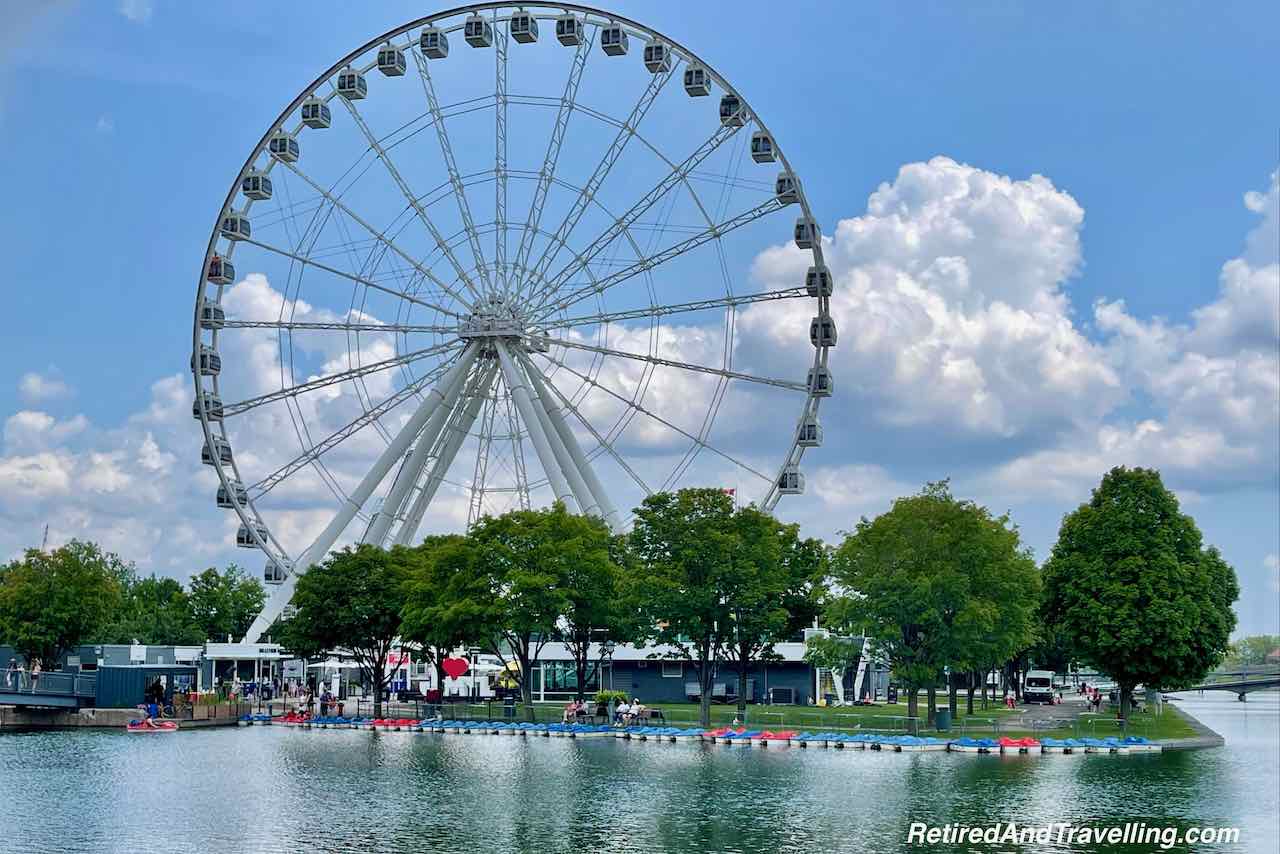 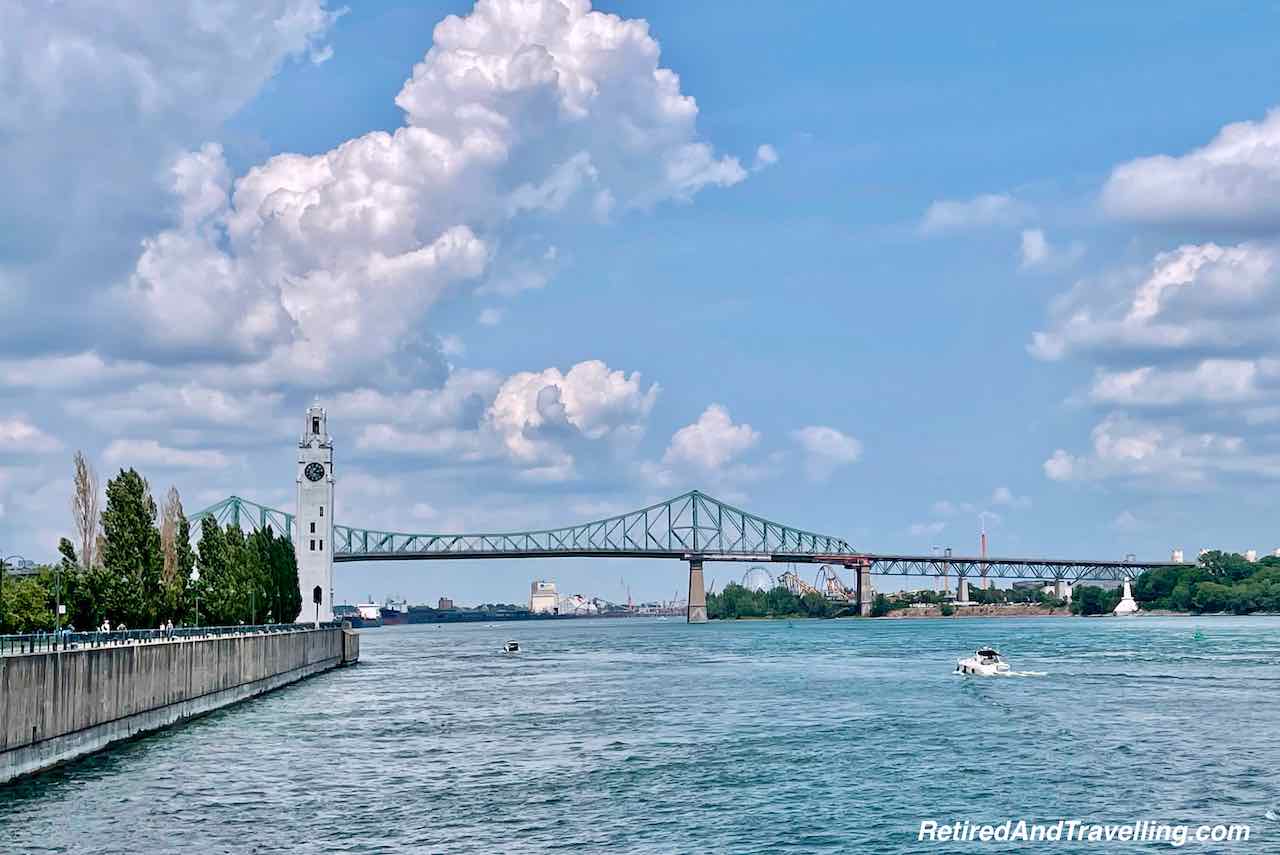 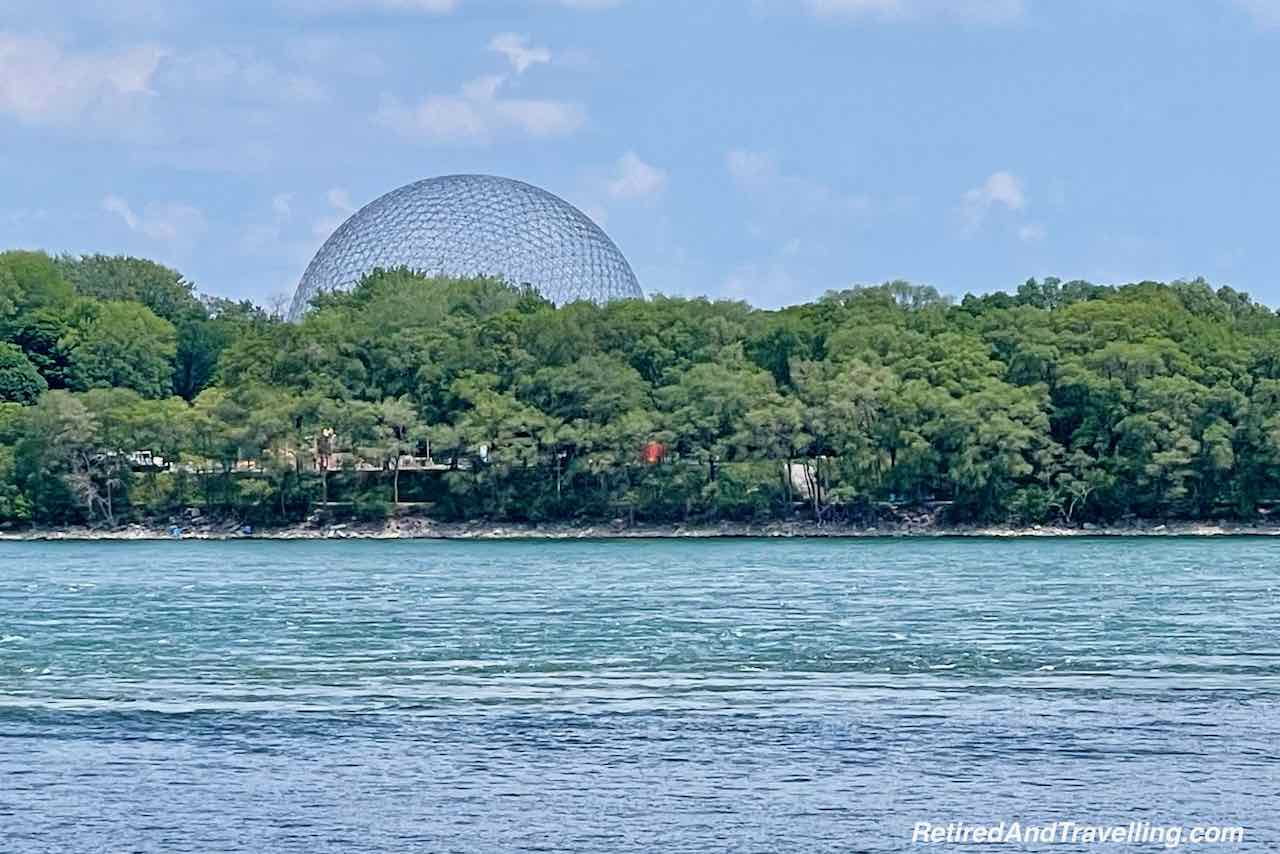 There was an amusement park area on the waterfront.  We saw people moving along the rope adventure area.  For more fun there was even a zipline! 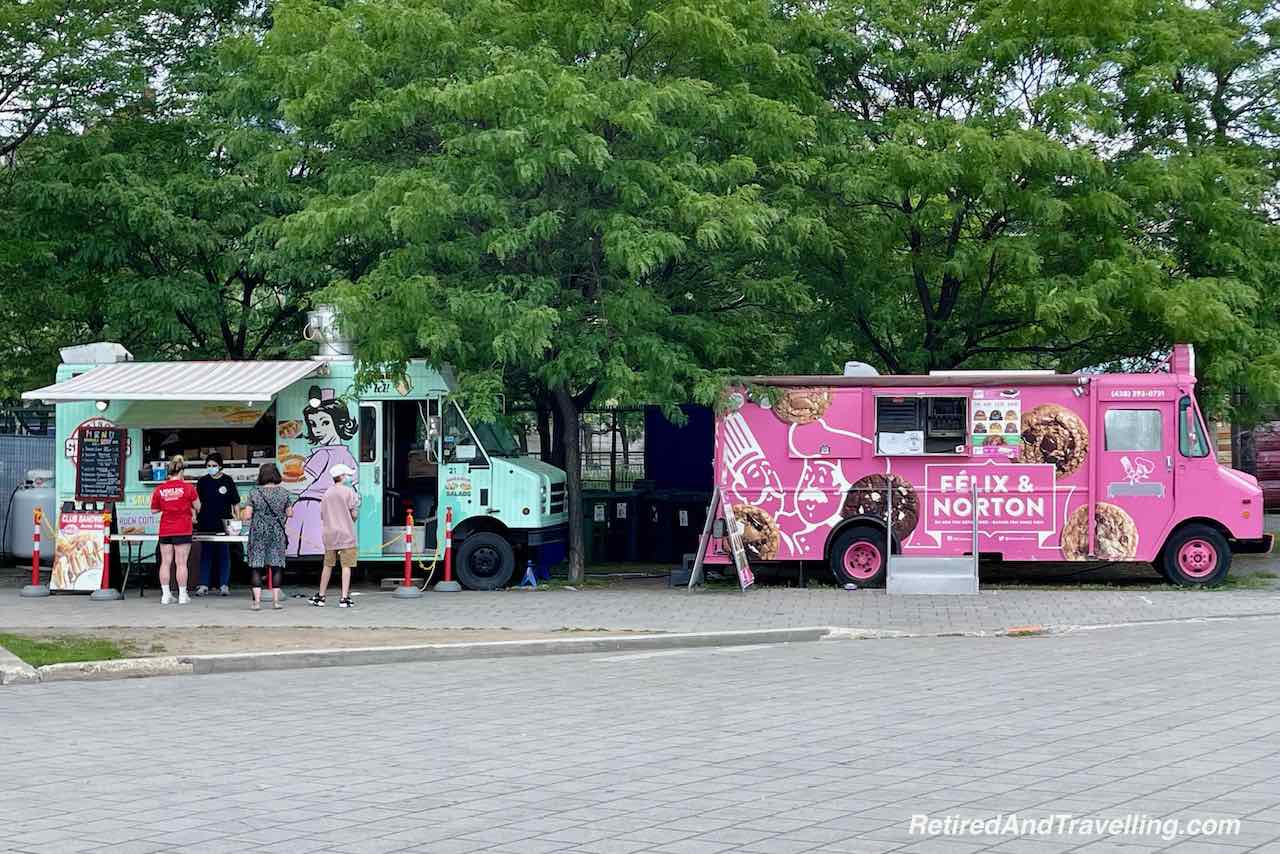 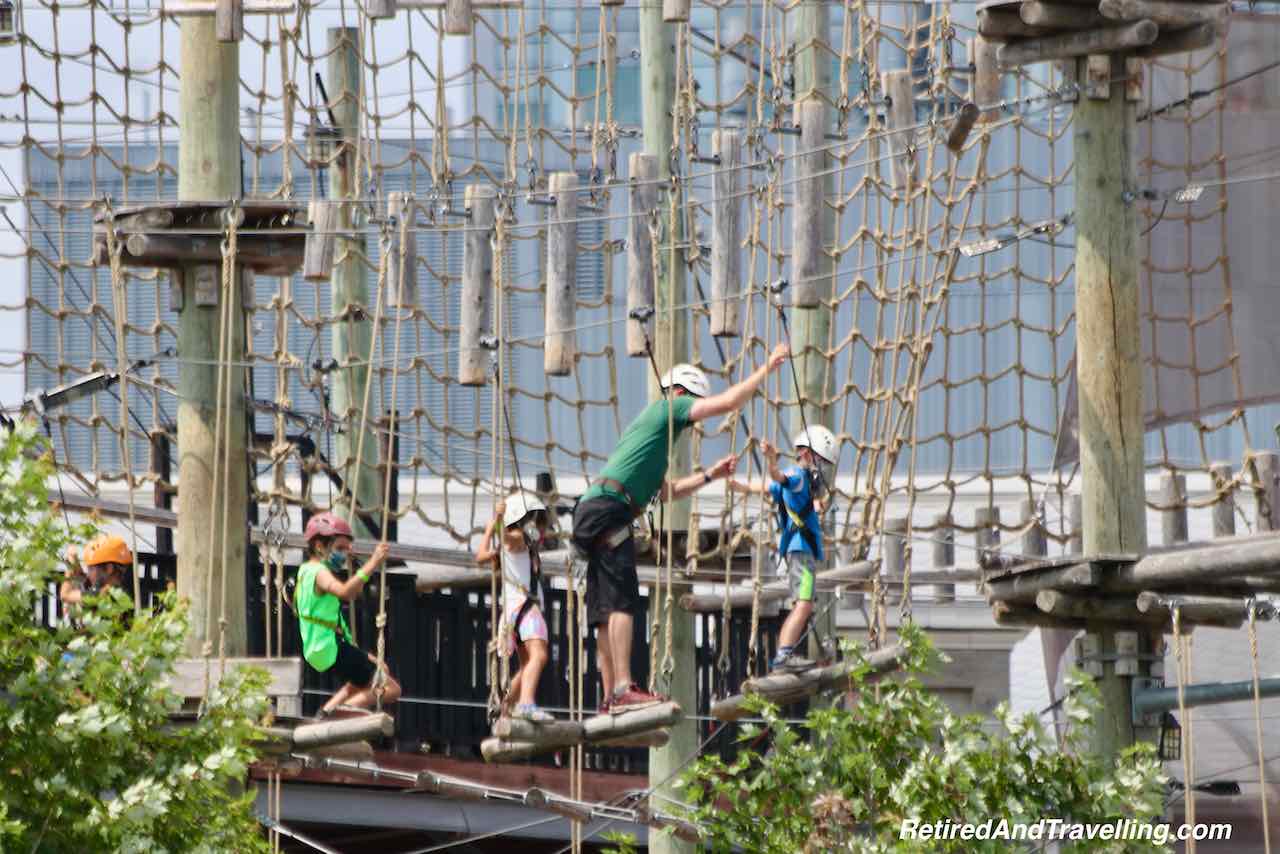 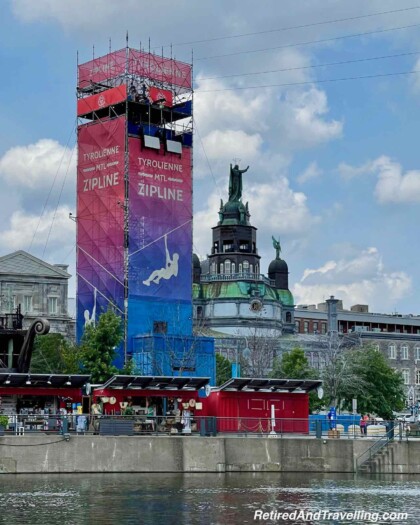 We found so many ways to have fun in Old Montreal.

After we wandered along the waterfront, we strolled along the cobblestone streets of Old Montreal.  Shops and restaurants lined the streets.  Musicians entertained the people as they strolled or sat for lunch.  There were many historic buildings in Old Montreal.  But on this visit we did not have enough time to see them all. 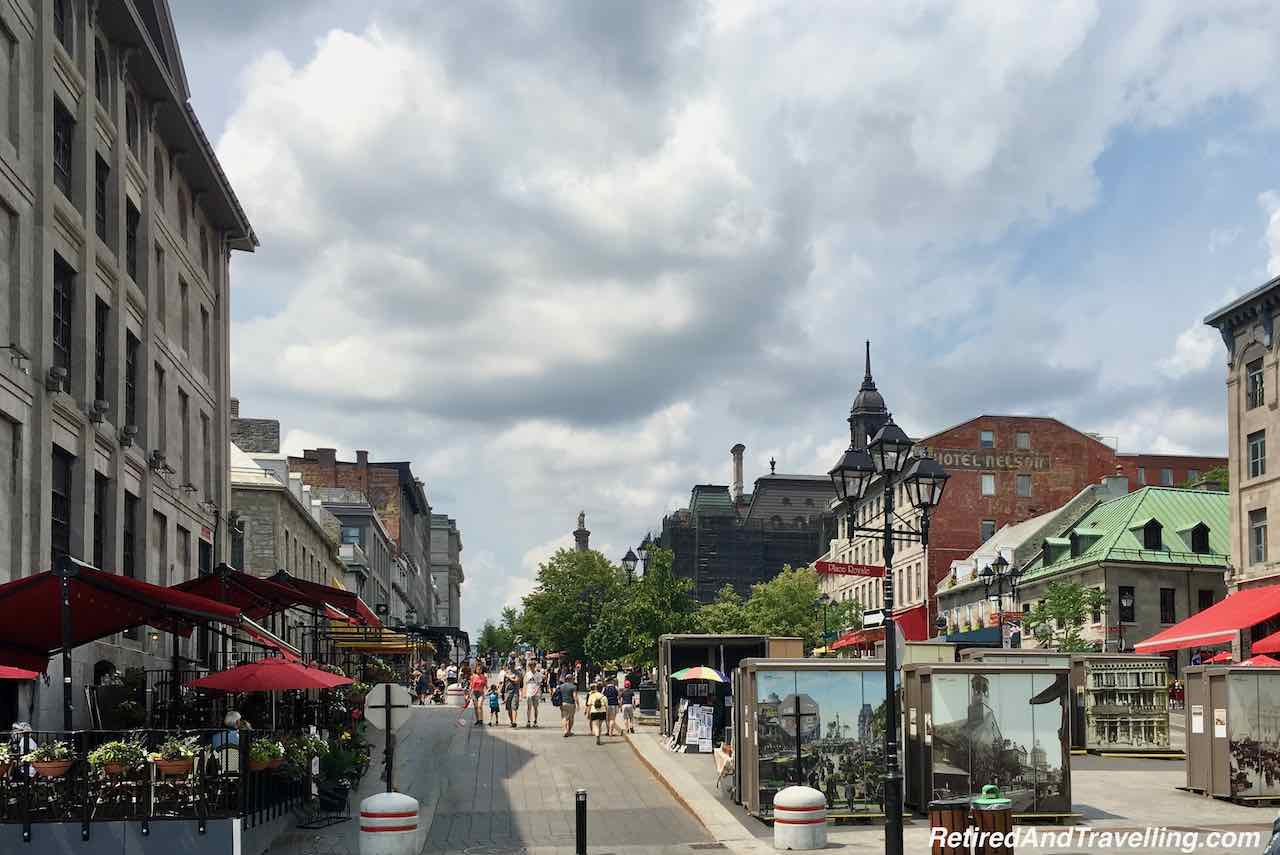 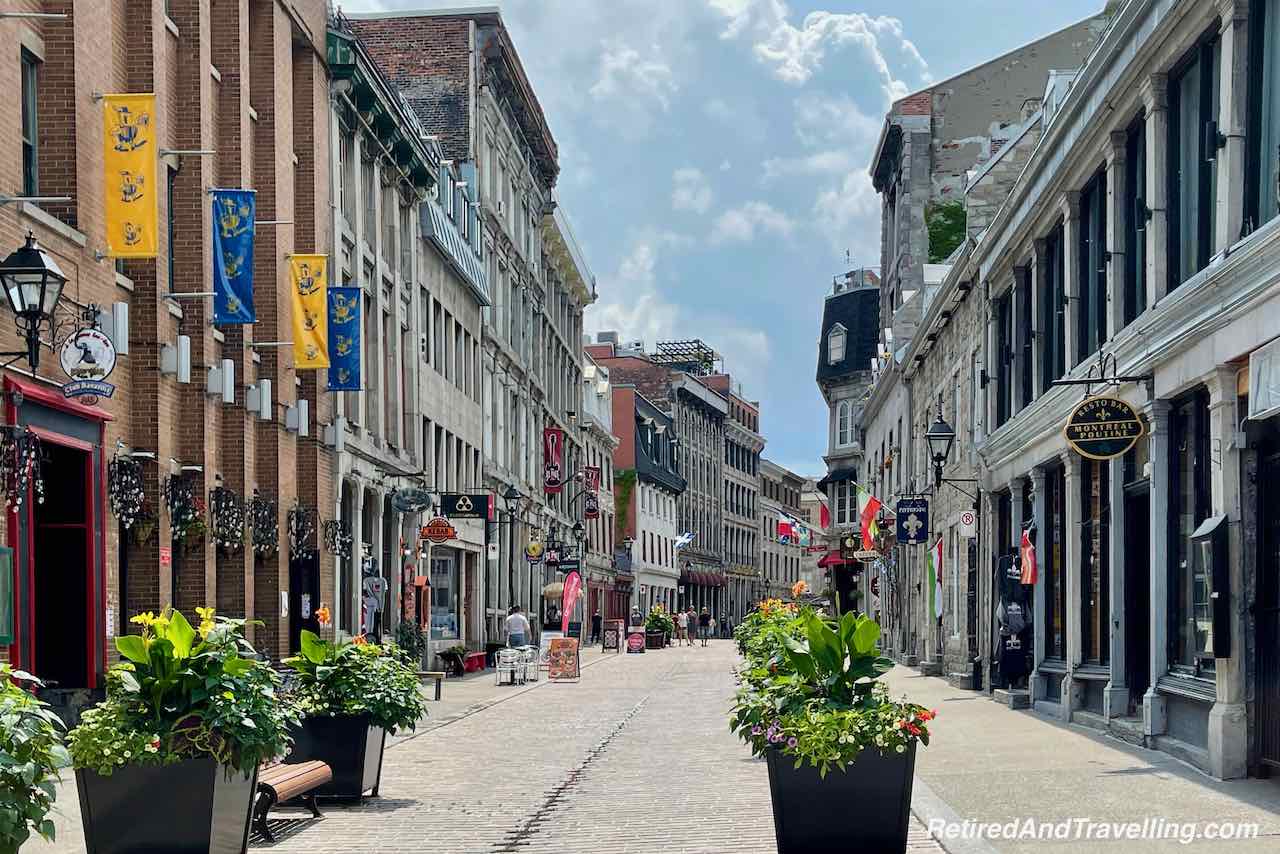 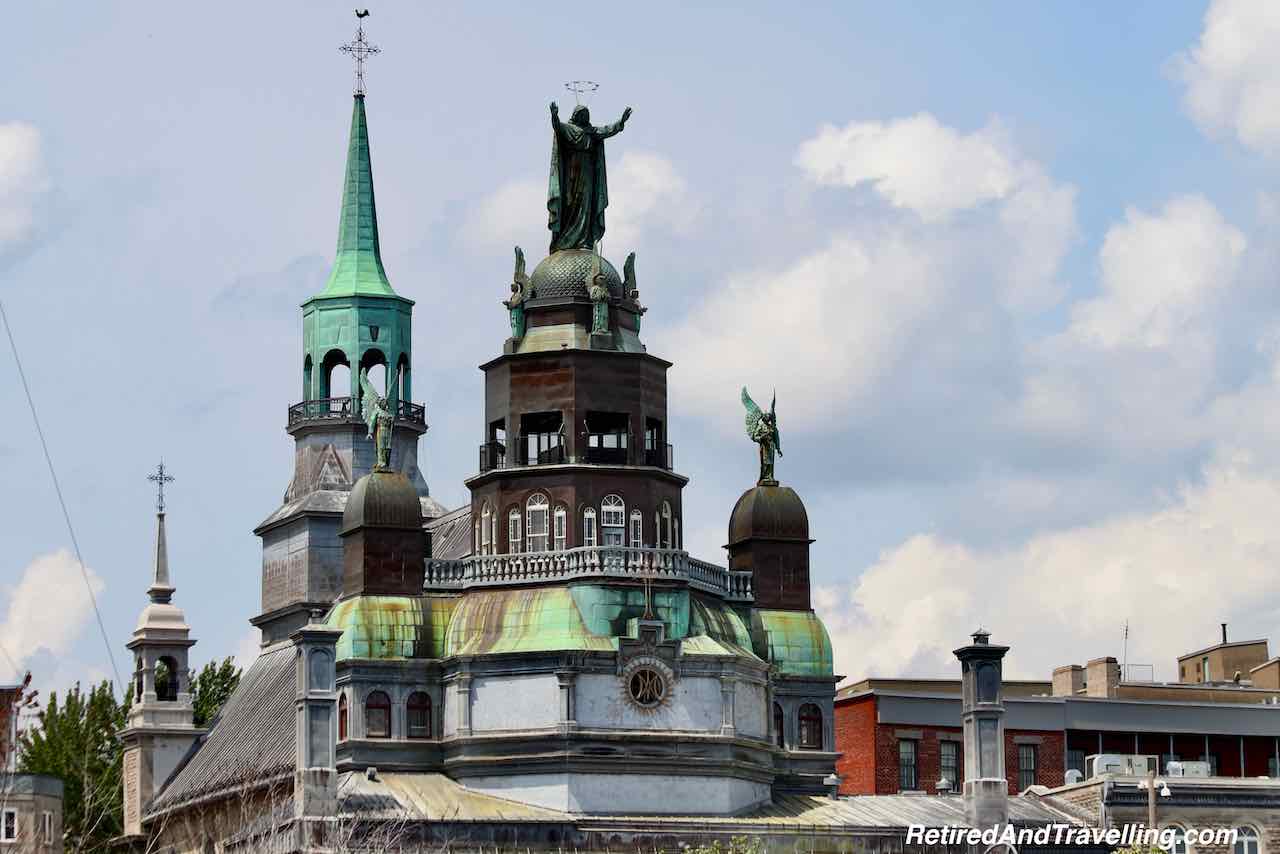 Place Jacques Cartier had many great outdoor patio spots for lunch.  We finally got a patio spot at the Jardin Nelson and enjoyed a great seafood lunch with a view. 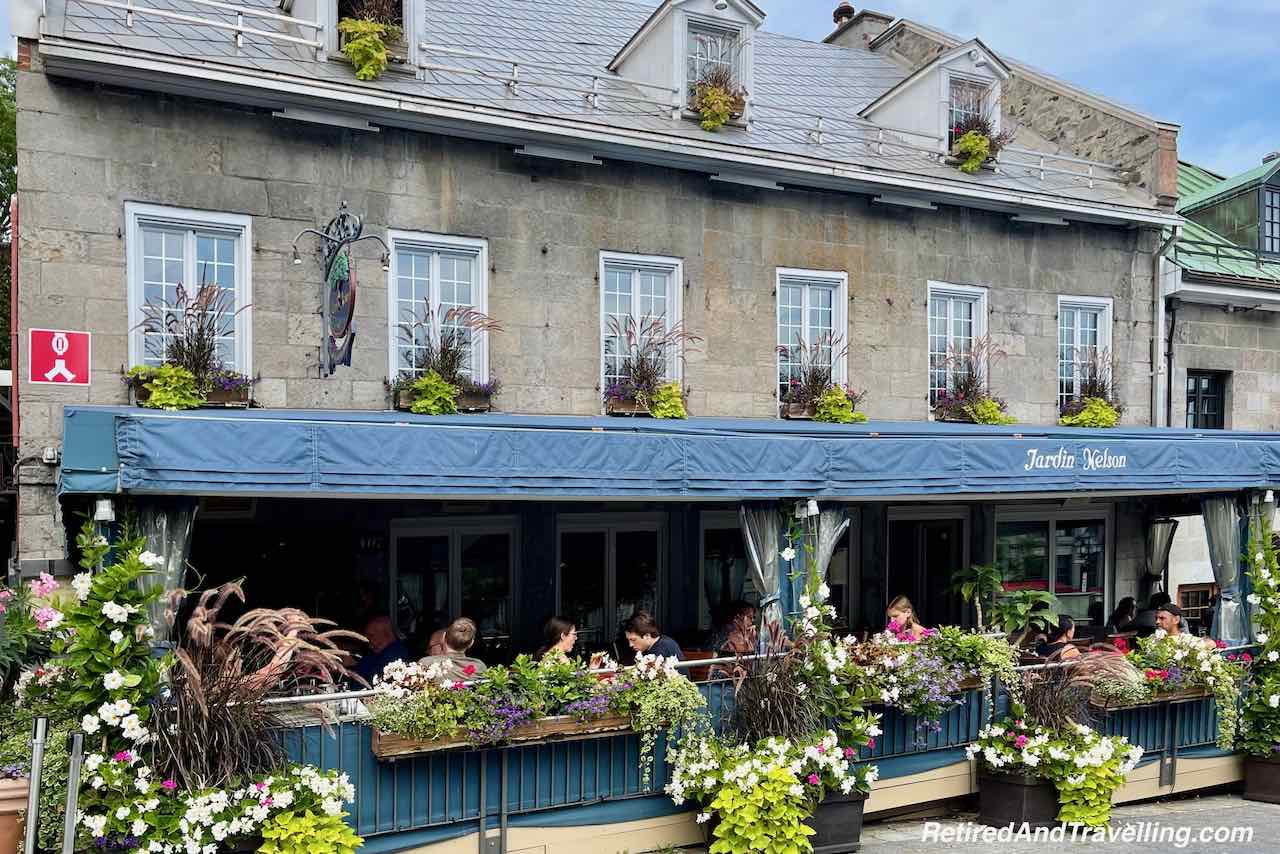 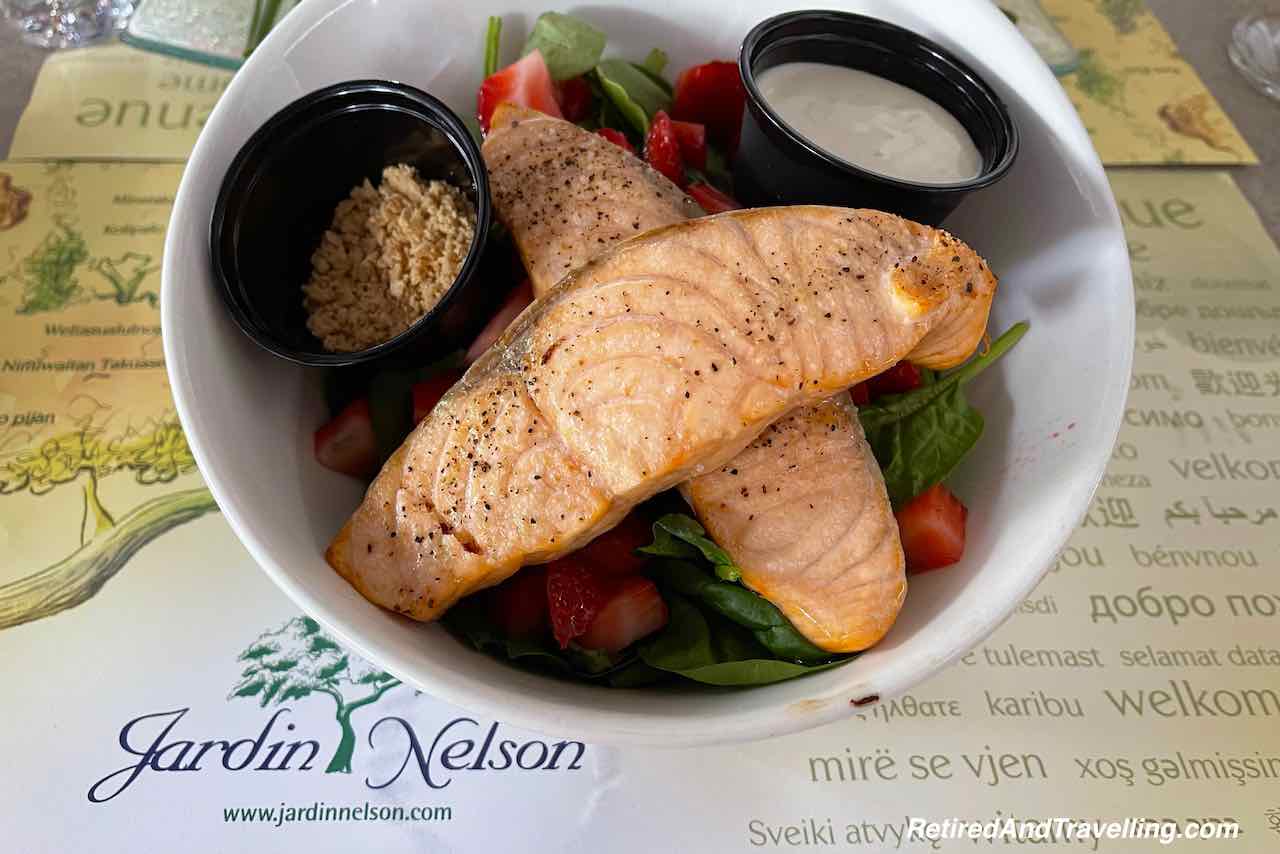 We enjoyed our short break before we headed off for more fun in Old Montreal.

A Harbour Boat Tour For Fun In Old Montreal

We headed back to the Grand Quai after lunch.  Our tickets for whale watching from Tadoussac, included a Montreal harbour cruise.  We got on the boat and grabbed a seat on the top outside deck with a view over the bow of the boat. 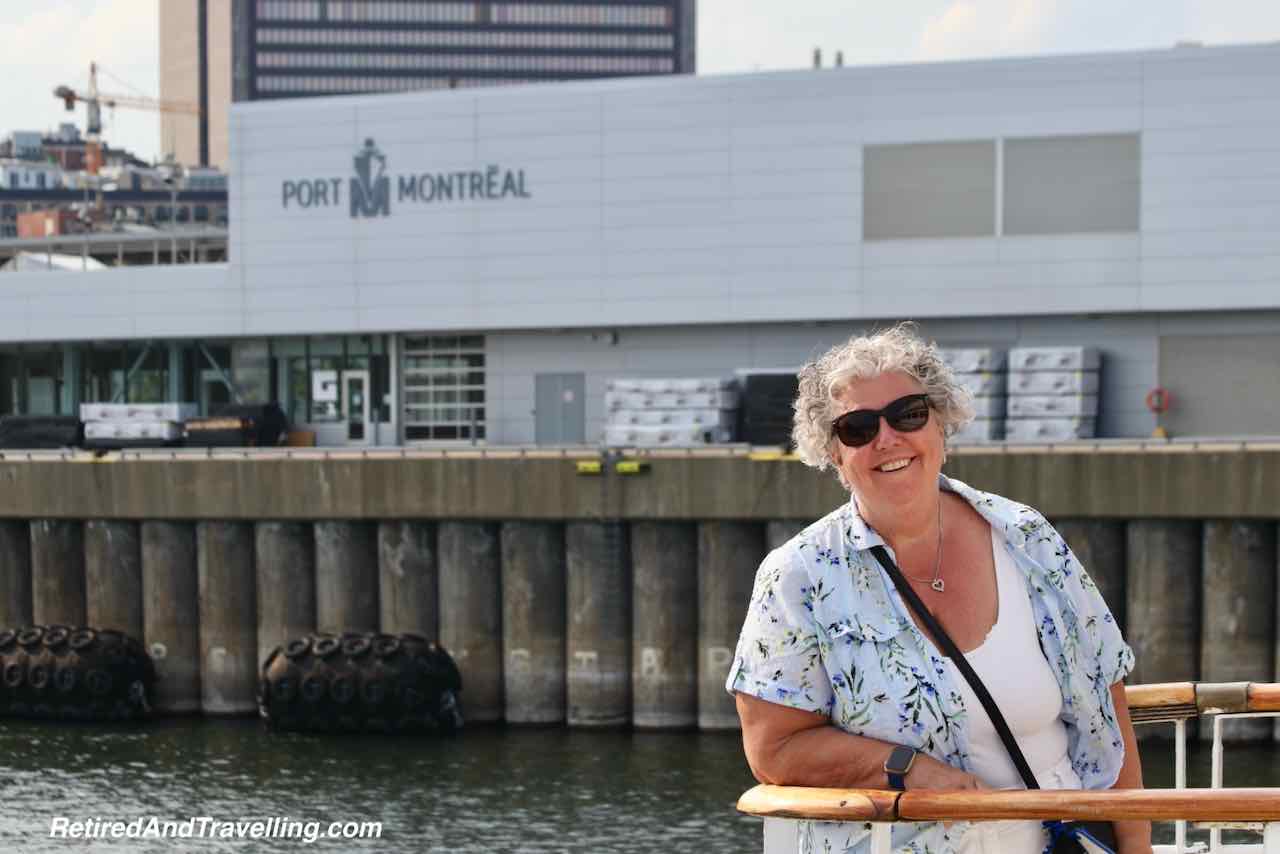 The boat went slowly back up along the waterfront area we already walked.   We saw the ferris wheel and Sailor Tribute Clock from this different perspective on both the trip out and back in. 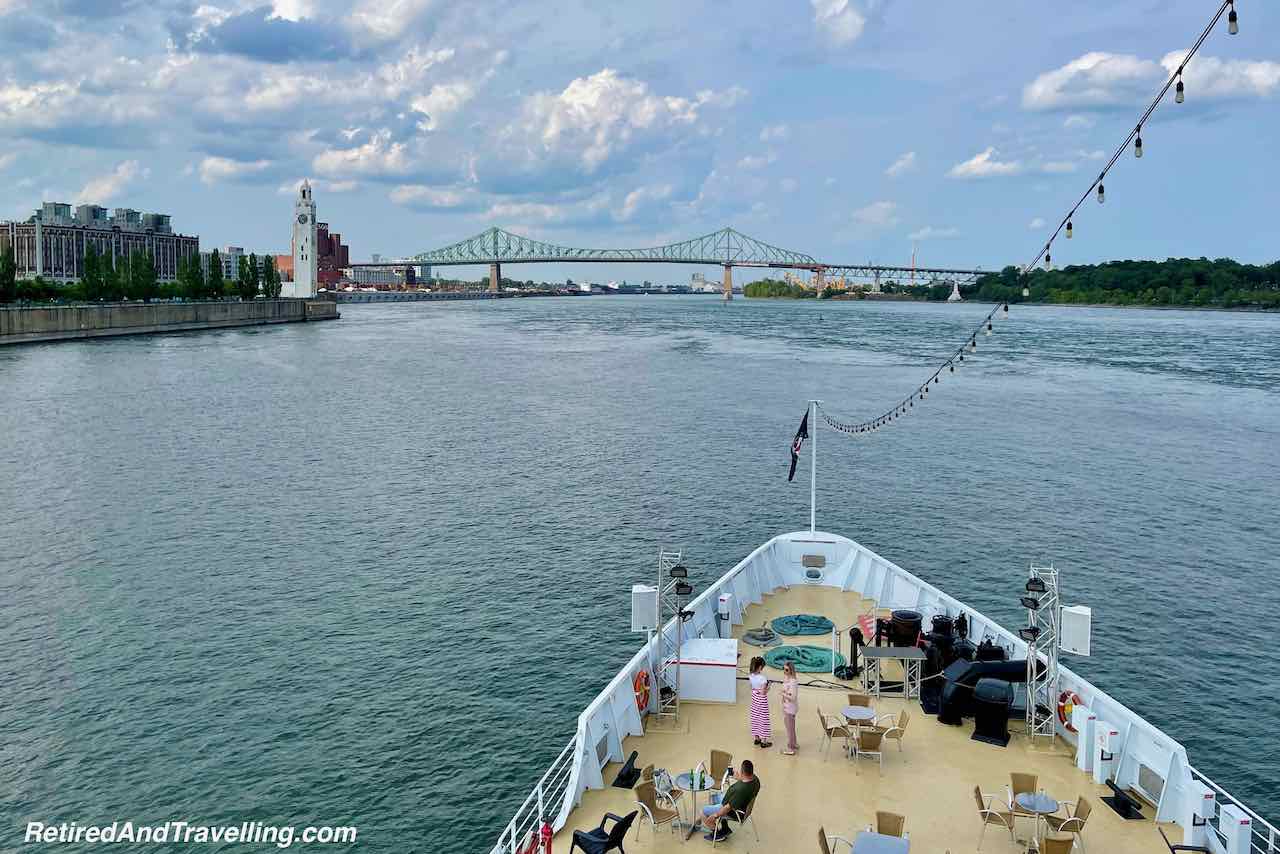 Close to the Jacques Cartier Bridge we got a close up view of the La Ronde, created for  Expo ’67 and the second largest amusement park in Canada.  We were not sure who watched who as we went past! 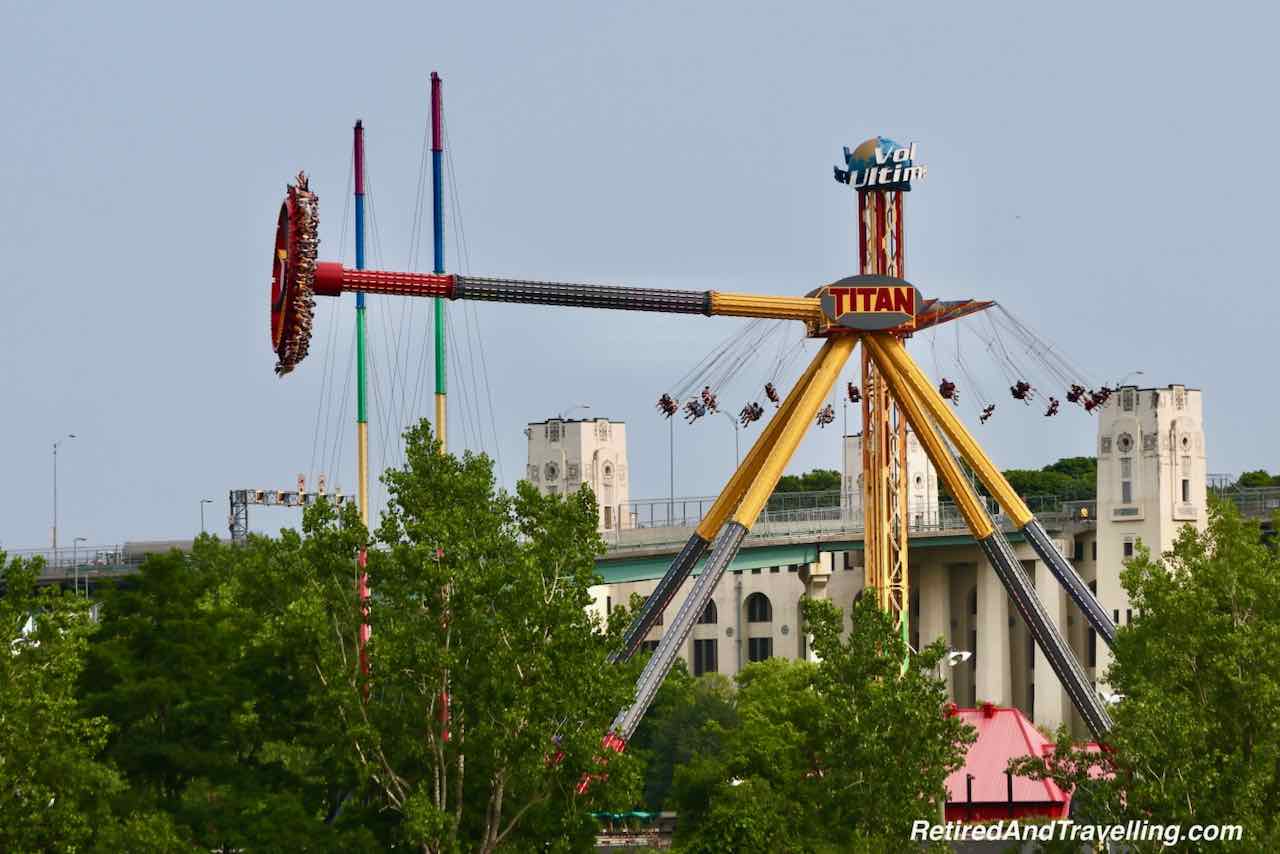 On our river cruise we got a different view of fun in Old Montreal.

A Different View of Montreal From The Water

After we cruised along the downtown area, we want past the industrial port.  One large container ship was being loaded. A large Great Lakes freighter like we saw when we cruised the St Lawrence in the Thousand Islands passed us going the other way. 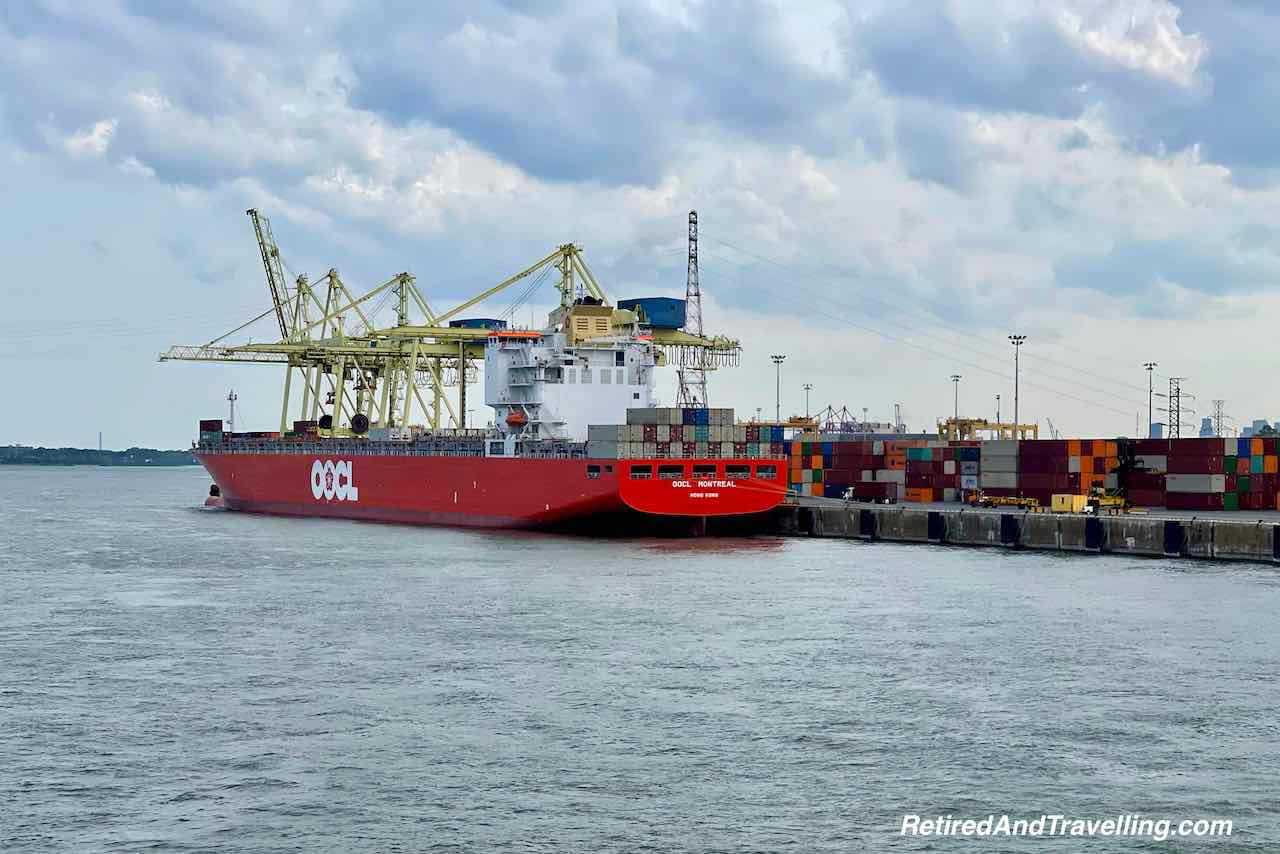 We saw lots of variety in the boats and other tour boats on the water.  Small pleasure craft went by.  People on personal water craft rode our waves. 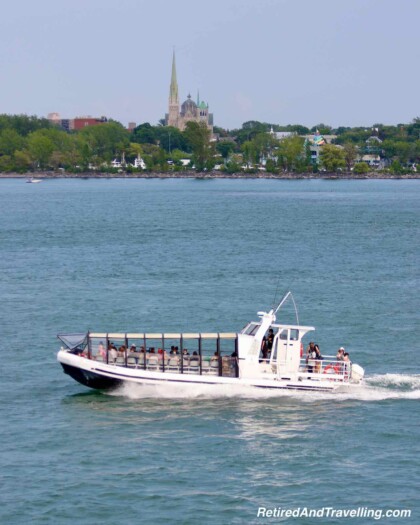 We cruised for about an hour and then turned back towards downtown Montreal.  The boat followed the same path and got the same views in reverse. 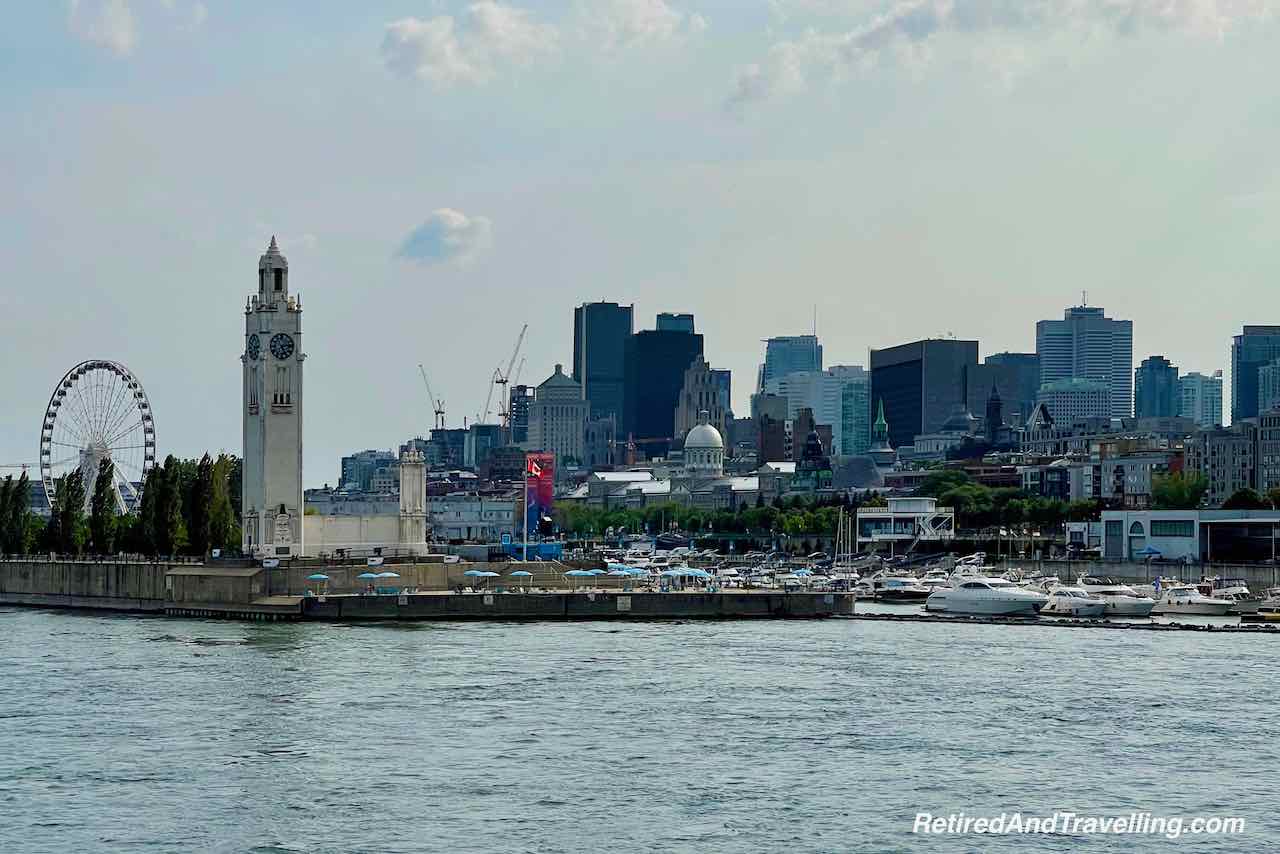 We were always interested in getting a different perspective on a city view and often did a water cruise.  Certainly one great way to have fun in Old Montreal.

Much To See And Do For Fun In Old Montreal

We had a busy few days on our short stay in Montreal.  We were happy we planned a day for fun in Old Montreal.  There was much more to see and do than we had time for on this visit.  But we saw there was something for everyone!

Did you have fun in Old Montreal?  What was your favourite thing to do? 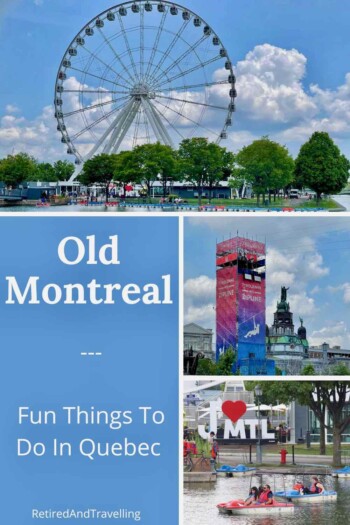 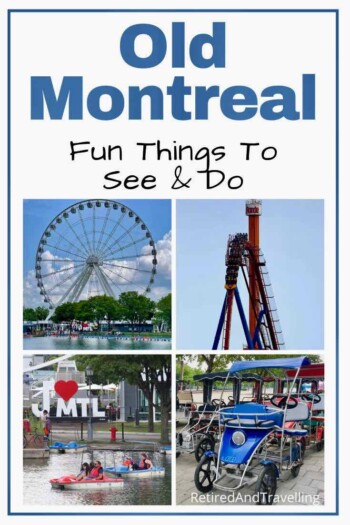 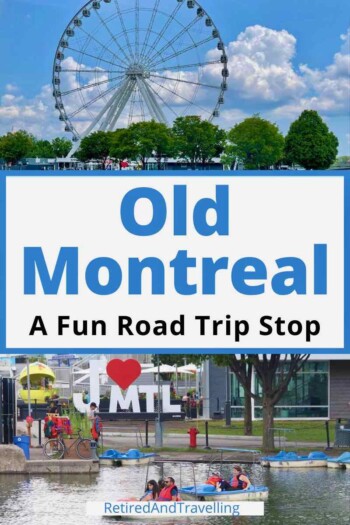 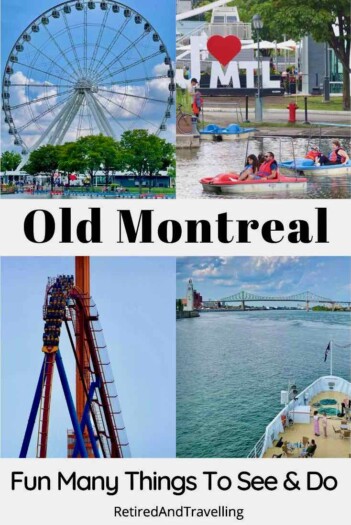 So Many Great Vienna City Sights

5 Week Road Trip Around BC

We Explored British Columbia (BC) For 5 Weeks On our road trip around BC (British Columbia) we travelled from the Okanagan Valley in the east to Vancouver Island on the west coast. We visited Vancouver […]