A Perfect Day For Whale Watching From Tadoussac Quebec

After a busy few days in the Saguenay region in Quebec, we headed back down to the St Lawrence River for whale watching from Tadoussac in Quebec.

We did whale watching in many places – California, British Columbia and the Azores in Portugal. But we never saw Beluga whales. So we could not pass on the chance to see some in the Tadoussac area.

We were glad we booked our whale watching on the smaller, faster zodiac boats. The boat ride was fun as we zipped along on the flat waters. Our boat captain was on the alert and made sure we saw whales in many places on this trip.

Getting Ready For Our Whale Watching Excursion

We booked our whale watching excursion with AML Croisiere Aux Baleines on their smaller zodiac boats. When we arrived in Tadoussac we were not really sure where to meet so we ended up at the end of the long dock where we saw the large AML boat.

We gathered all of our stuff before we tried to check in. And were told we passed the zodiac centre on the way in. But since we paid to park for the day, we left the car and rushed back to arrive the 30 minutes before our tour that was required. 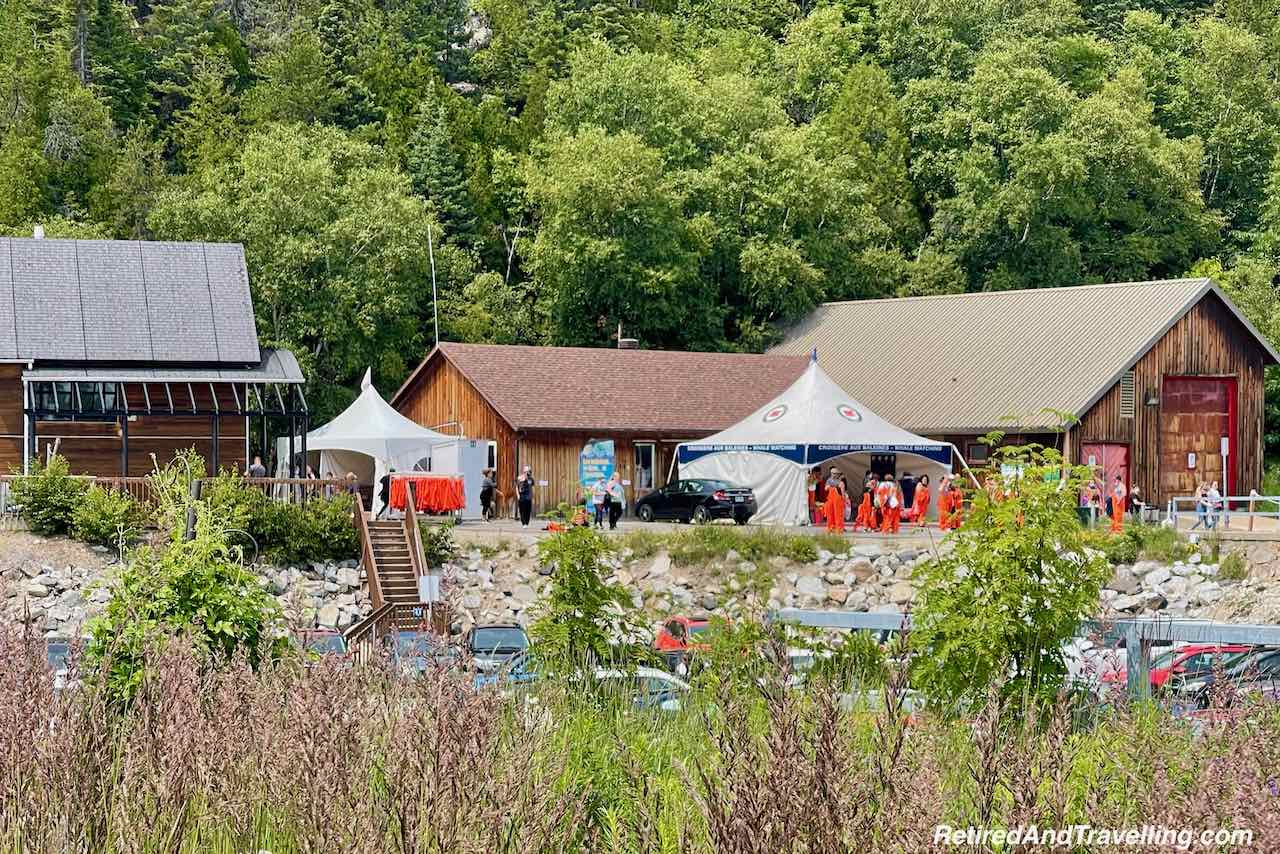 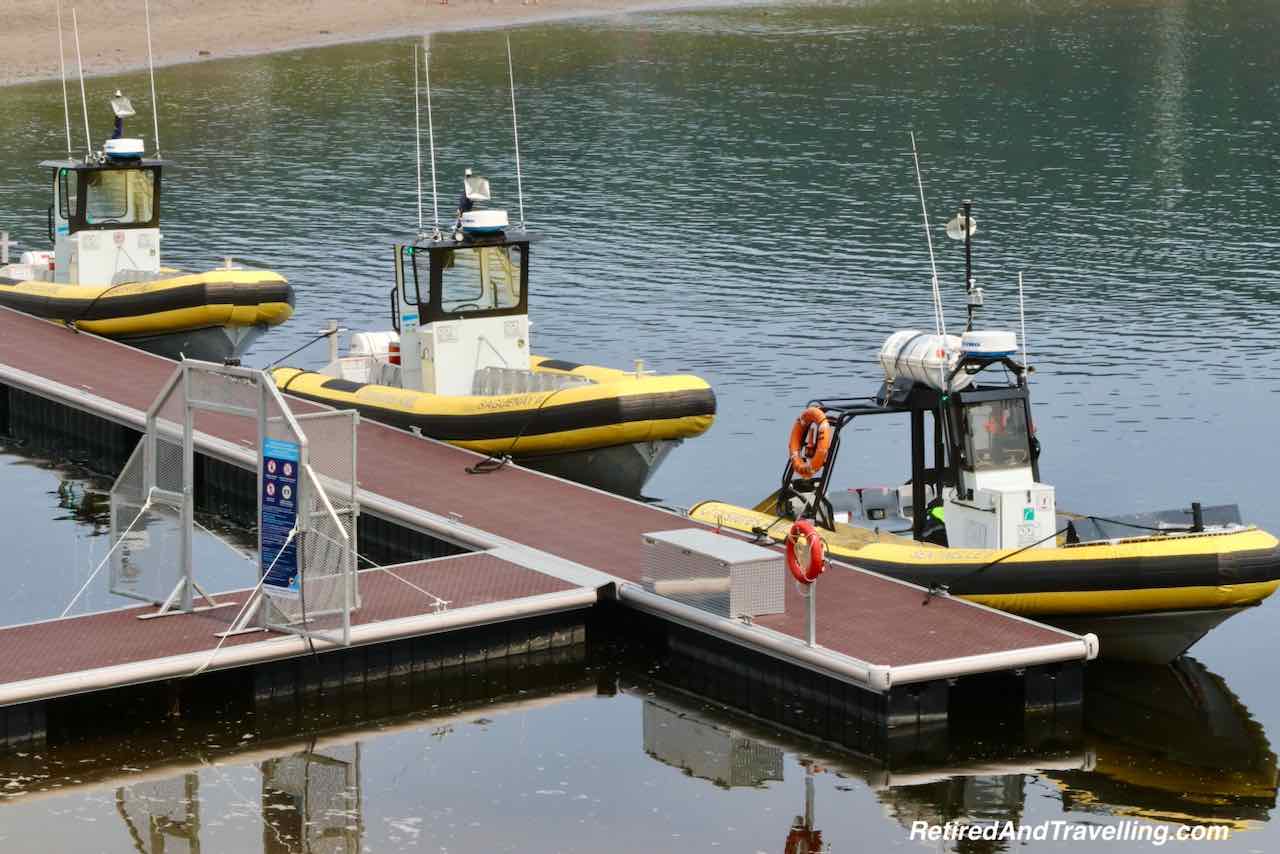 We waited for a bit and then were checked in. Everyone got bright orange wet weather suits. We wriggled into the bibbed pants and put on a warm sweater. Even though it was very warm on land, we were warned it would be cold on the water. We kept off our jackets until we were on the boat. 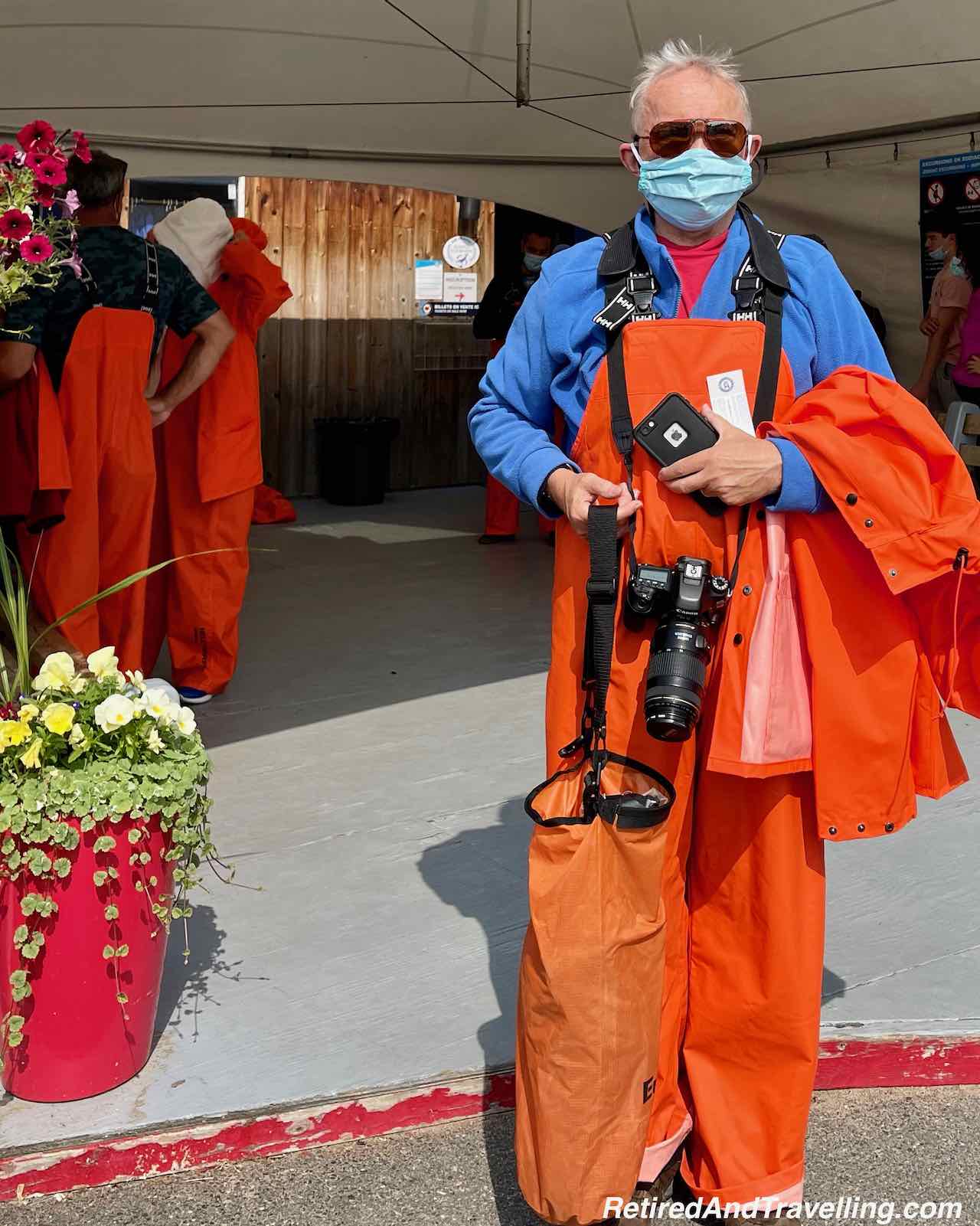 Sadly, we need not have rushed at all. Despite many emails to the participants about timing for travel into Tadoussac across the ferry, people showed up very late. And we got stuck in the last group that waited for all of the late arrivals and it was more than 30 minutes later getting we got on the boat.

Heading Out On The Water

Once the laggard group had all assembled, we marched up the hill and over the sand to the dock with the zodiacs. We were sure glad we carried our coats! The sweat suit worked well.

There were about 24 people on the boat. We initially wanted the front seat for a view straight out. But that was the windy seat. There were good views from every seat. And the boat captain turned the boat when needed.

The boat moved out the harbour and into the St. Lawrence. The waters were remarkably flat but we saw the distinct tide lines. We wondered if these were the areas where fish and feed accumulated. But we saw no whales close to the harbour. 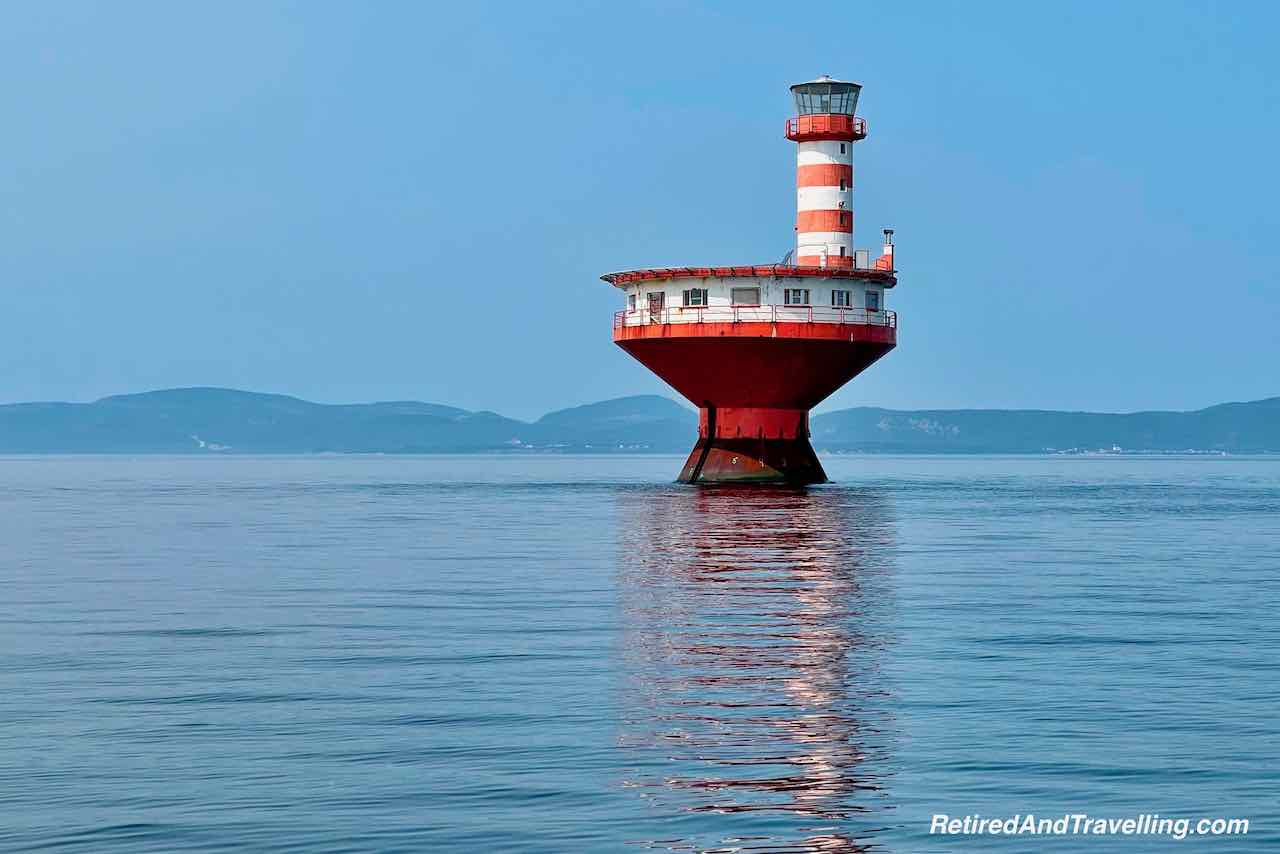 Our last zodiac headed out to the spot where the other boats all sat. Everyone waited to be whale watching from Tadoussac. 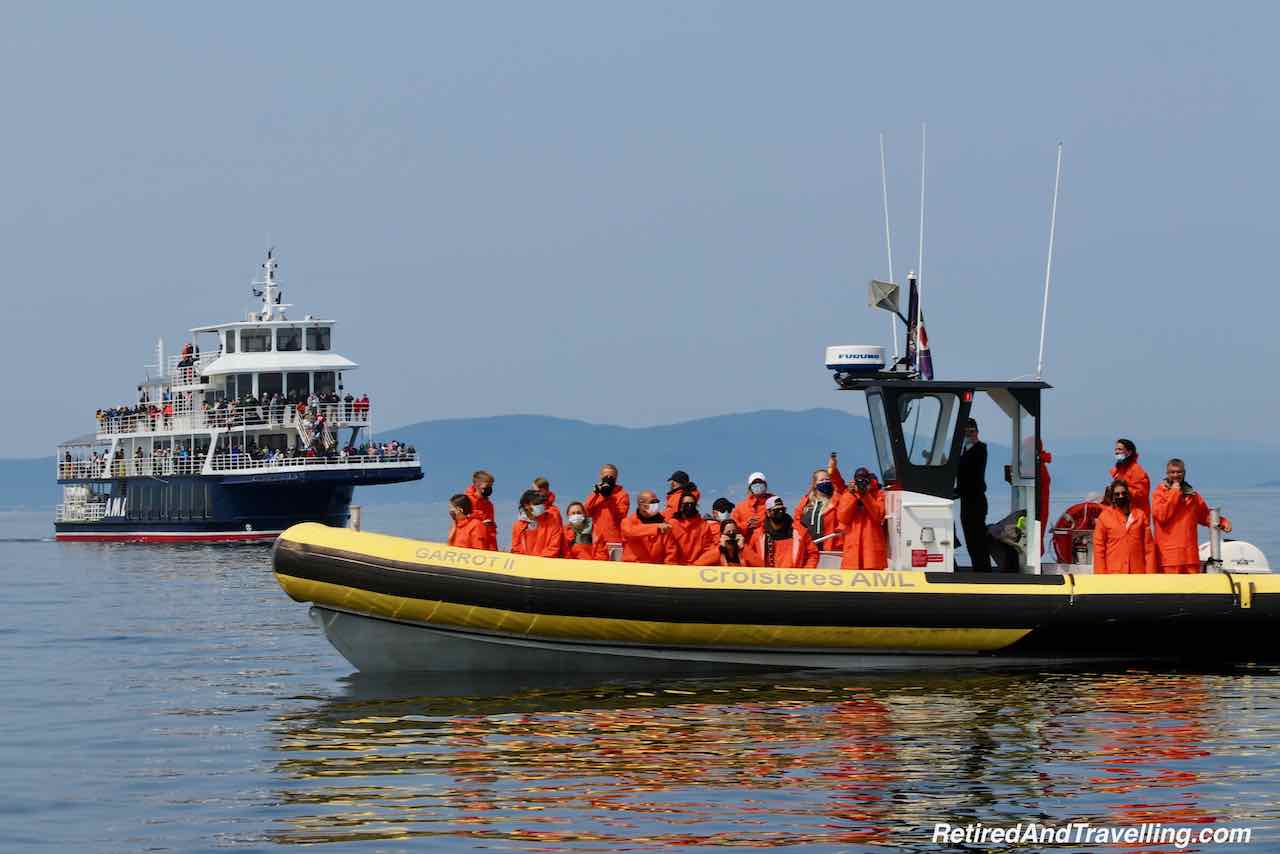 First Signs Of Life On Our Whale Watching From Tadoussac

Everyone got excited when they saw the first signs of life in the water. As we got closer, we saw a large group of seals as they floated at the surface and dipped down. Occasionally we got a flipper wave. 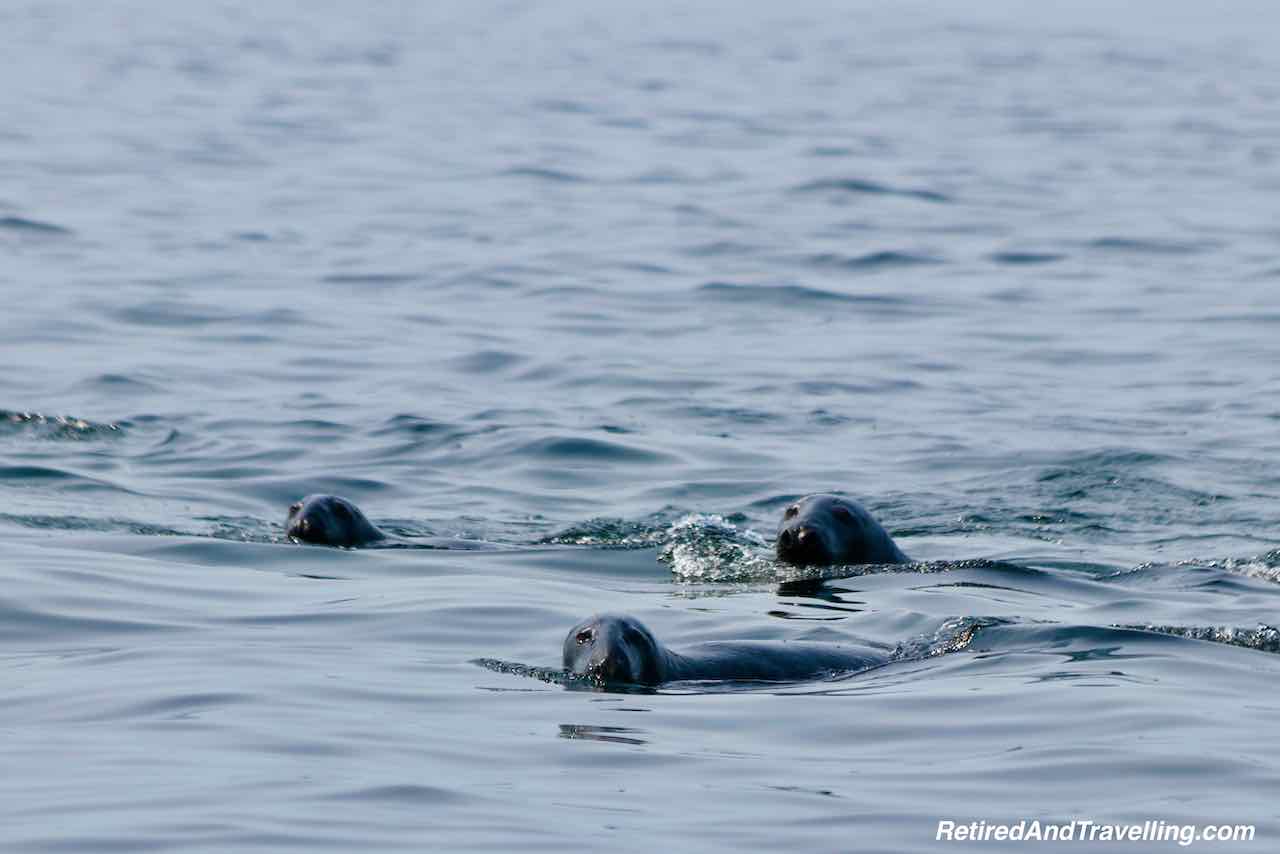 People with binoculars looked out on the horizon and occasionally saw splashes or water spouts. But those whales were too far away.

The whales came to this area of the St Lawrence because there was lots to feed on at the mouth of the Saguenay River. When we finally saw our first fin whale, it swam lazily just under the water. We saw a bit of the back fin. But they never dove deep to feed. 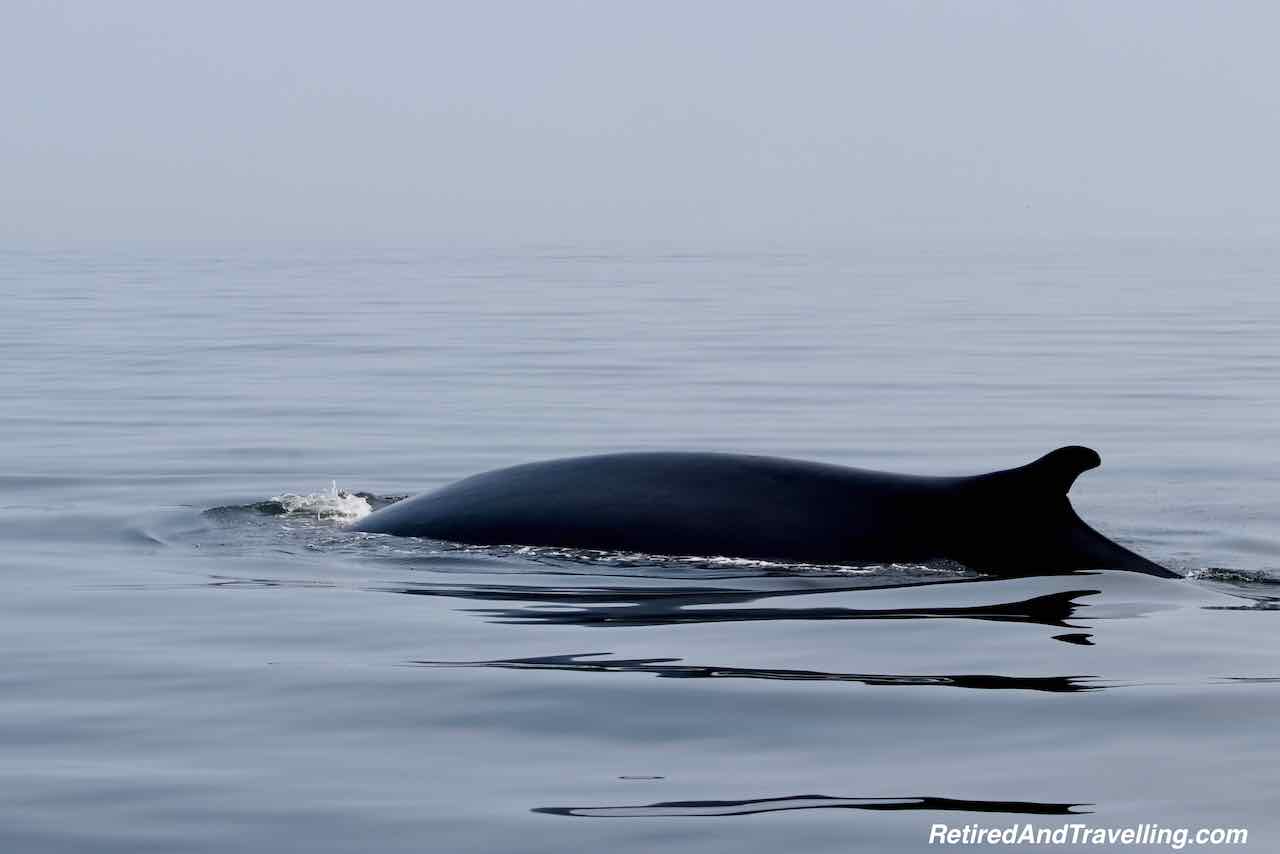 The captain moved the boat several times as we saw larger groups of fin whales. At any one time, we saw more than half a dozen whales lazily swim by. 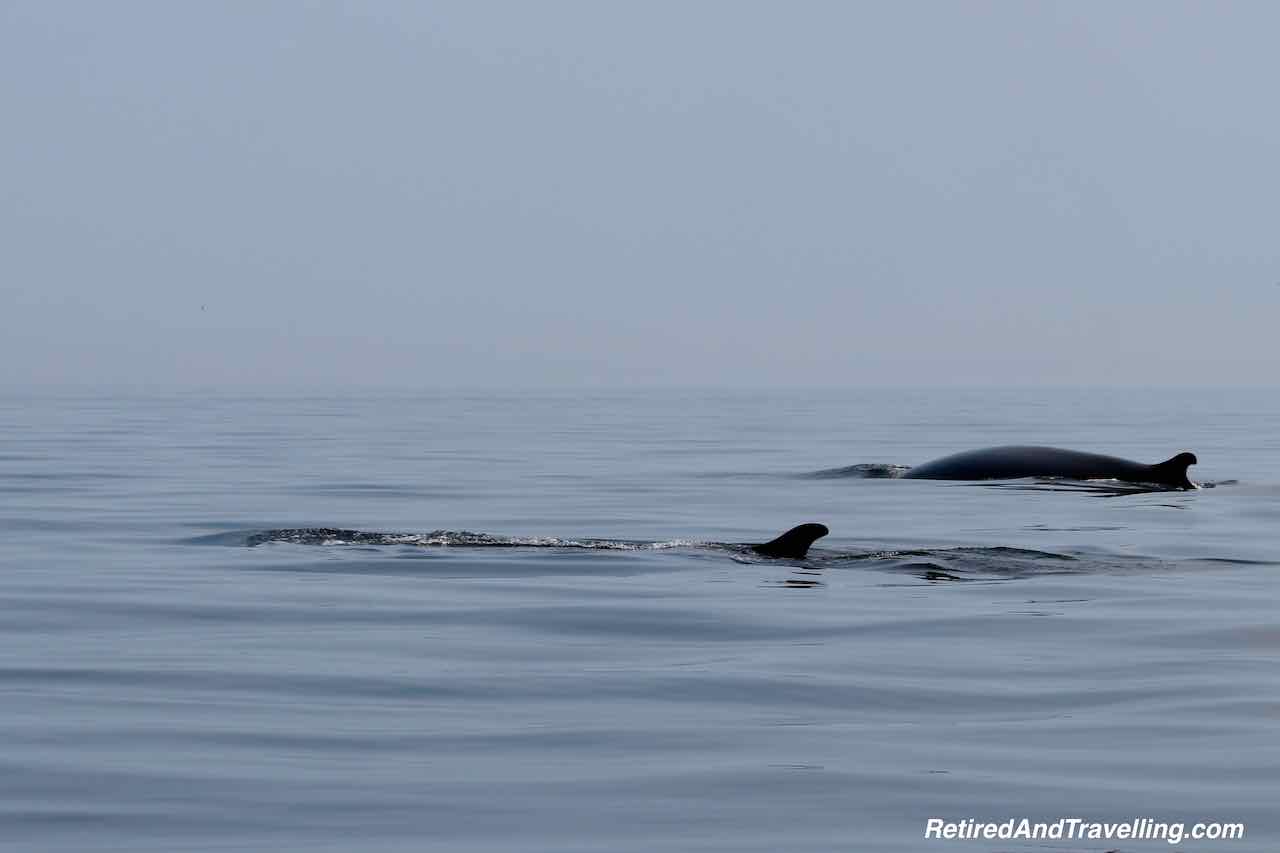 The whales got quite close the boats as they sat still in the water. It was always fun to see everyone move from side to side to catch the closest view. 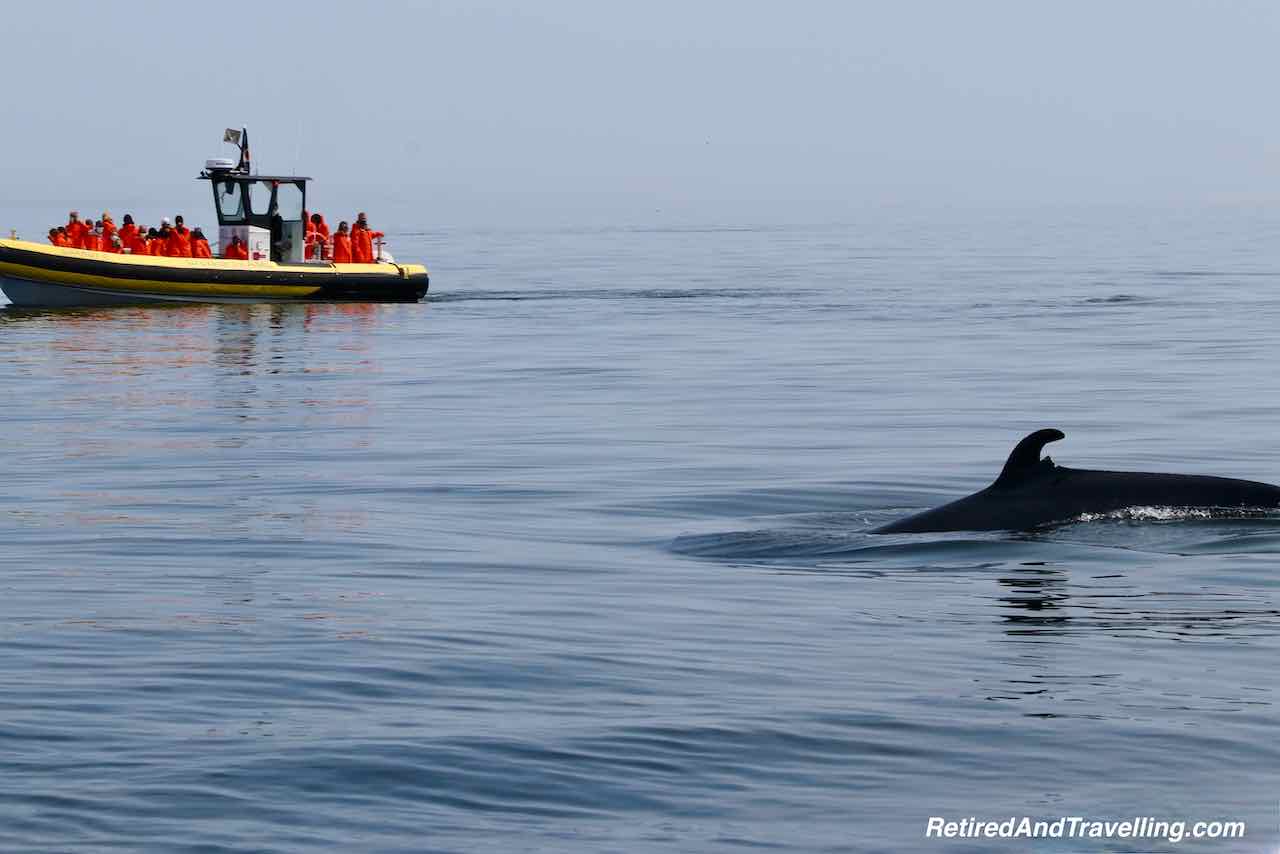 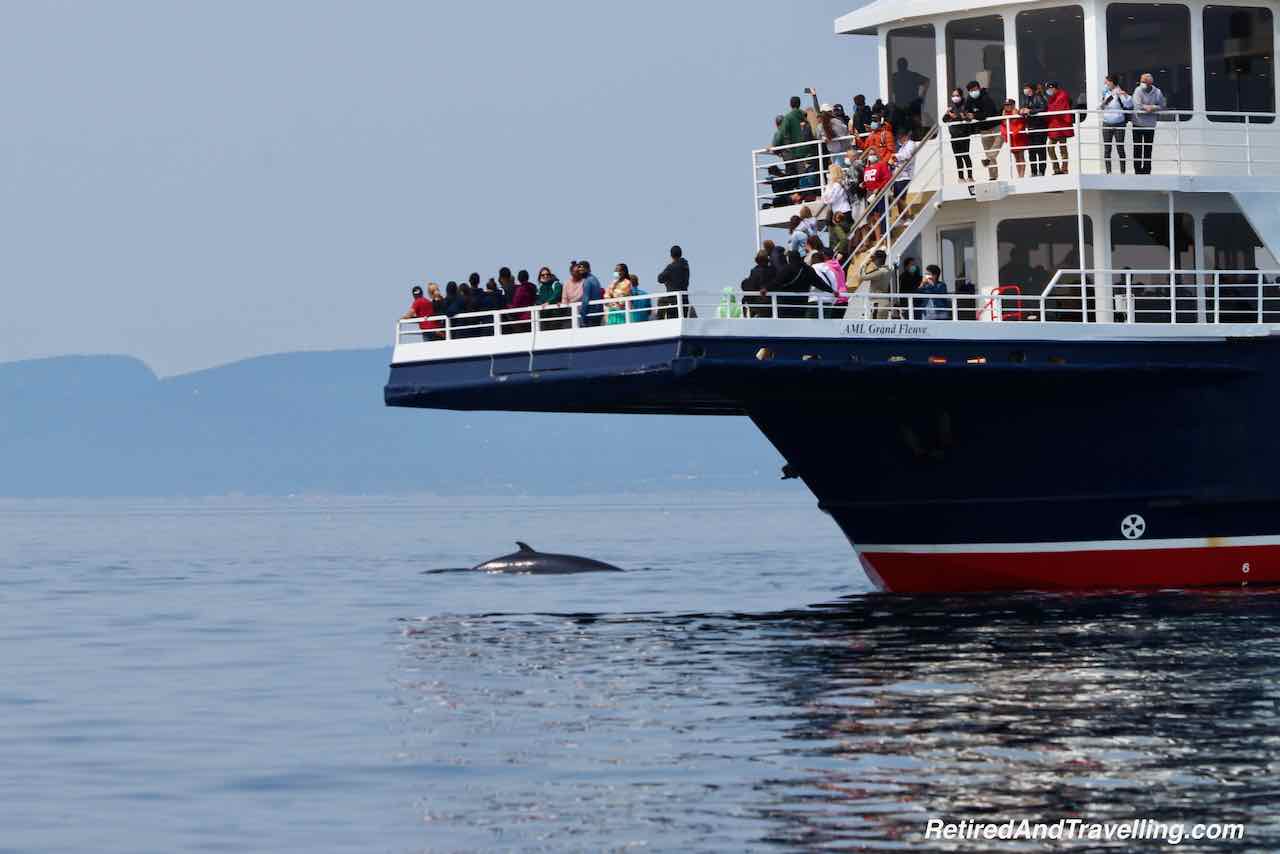 When one whale finally dove and flipped his tail, everyone on our boat cheered. We learned that these fin whales rarely raised their flukes (tails) out of the water. 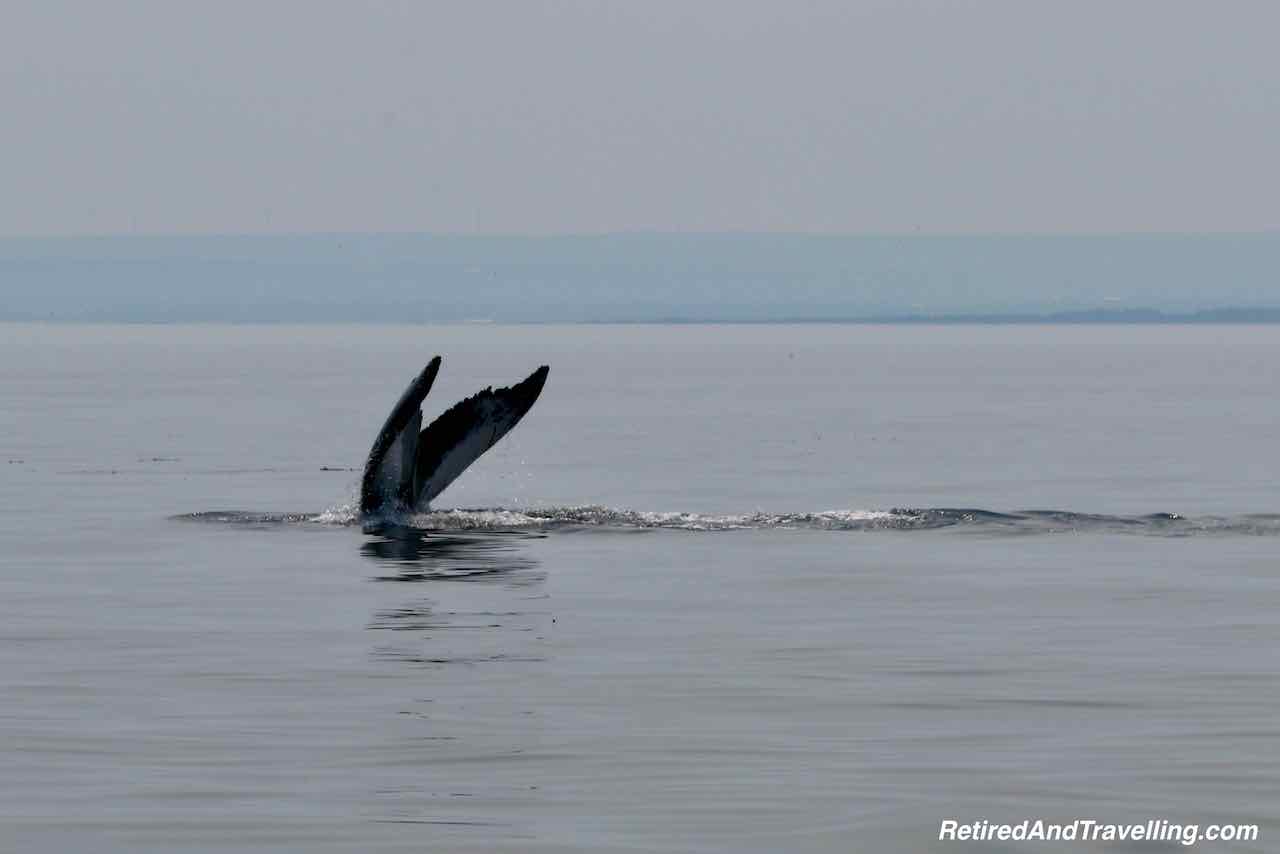 After watching the lazy fin whales, our boat captain had us all sit down and he sped out further in the channel. Soon we joined a group of boats. And were rewarded when we saw the first humpback whale in the distance. Then the second one blew. And another.

We never got very close to the humpback whales. Although we moved to get closer every time somebody saw a whale blow.

But we must admit to being a bit bored with the lazy antics of these humpback whales. On our last whale watching adventure in Campbell River in British Columbia a pair of humpback whales performed acrobatics for our group for hours!

It was still fun to see so many at once when we went whale watching from Tadoussac. And we loved the zodiac boat experience being so close to the water.

Our First Sight Of Belugas

It was easy to know when we finally caught sight of the first Beluga whales. The white heads poked above the flat seas. We were not sure how visible they were in rougher waters. 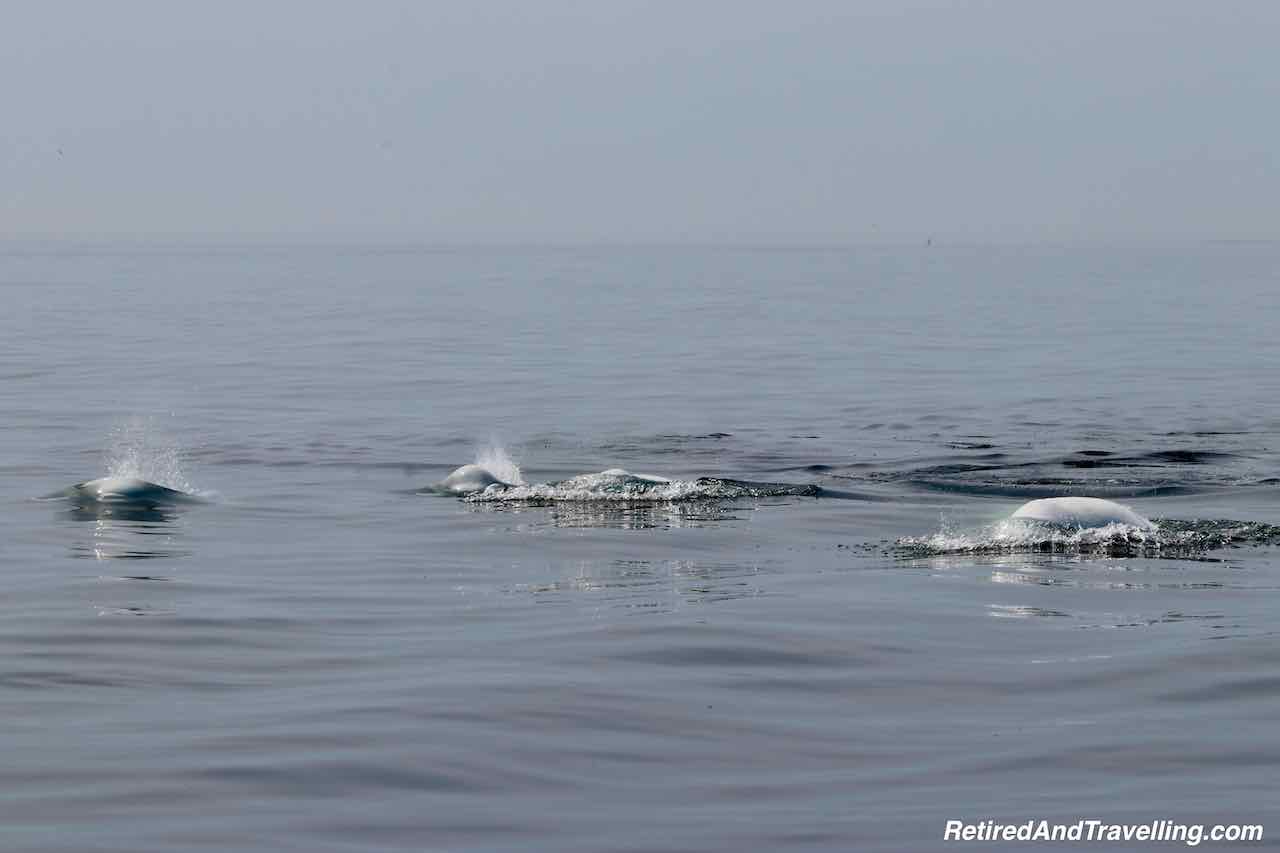 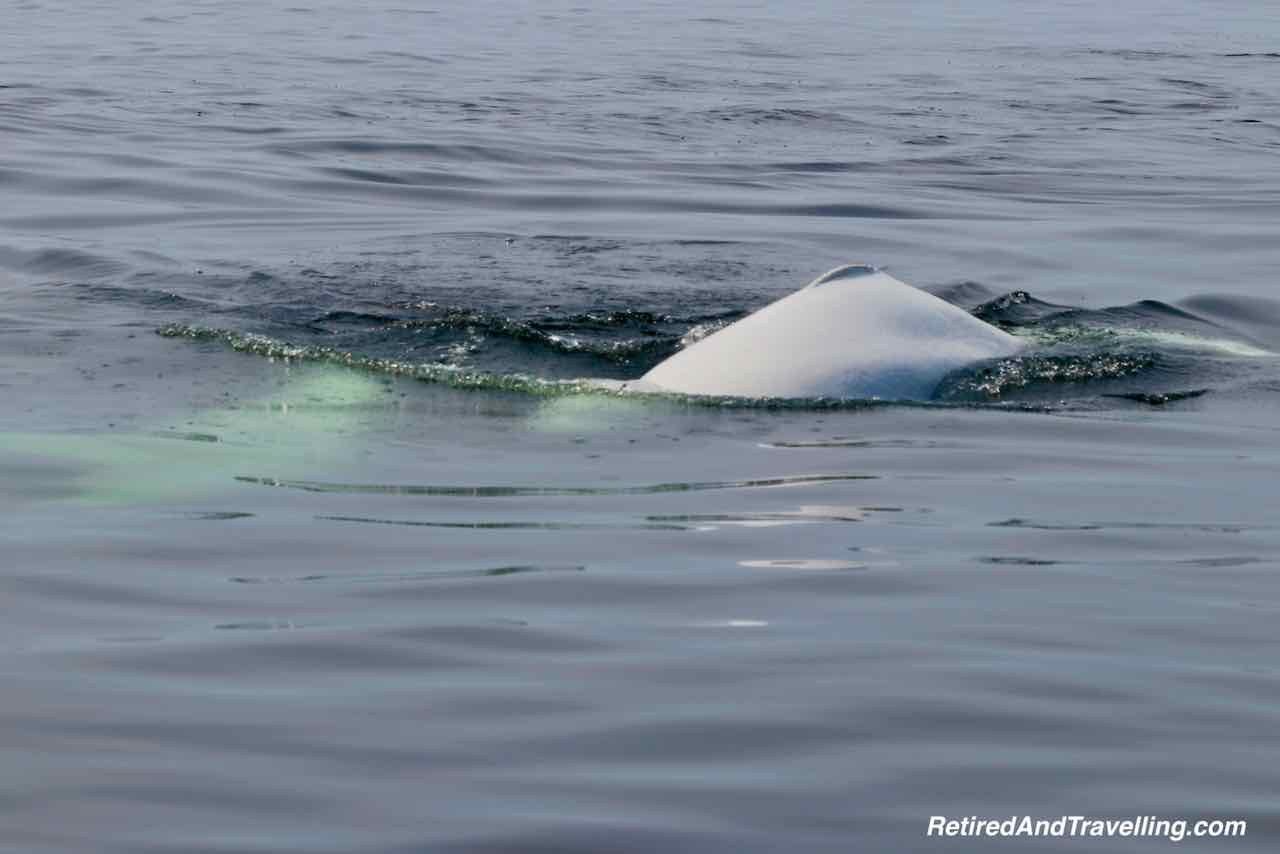 The beluga whales also just lazily swam by in groups of three or four. We got excited when a group headed towards the boat. I was so excited I could not even get a picture!

Up The Saguenay River

As we raced back along the St Lawrence River, we got brief glimpses of the land. After our whale watching from Tadoussac, we travelled north back up along the Whale Route (Route des Baleines) on the Cote Nord to our ferry at Les Escoumins. 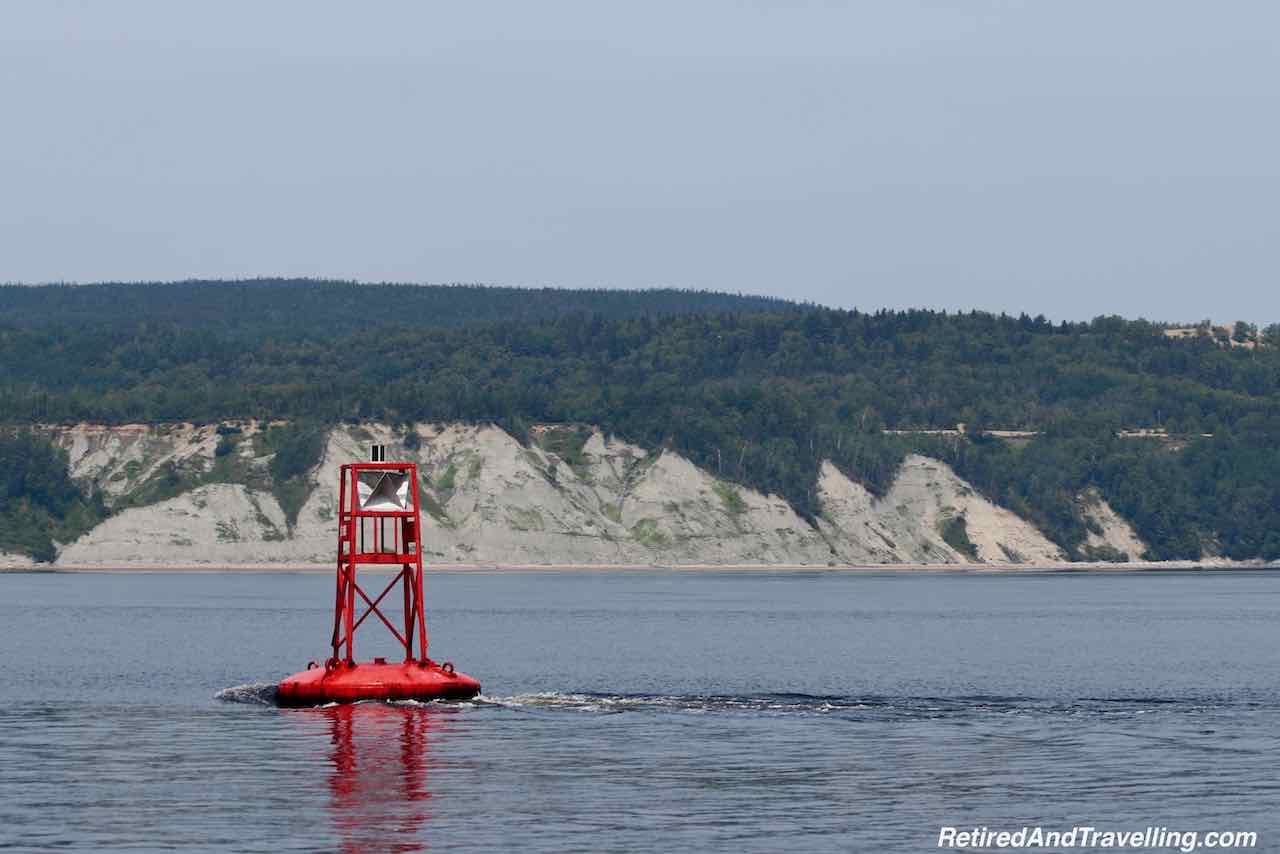 We went past the town of Tadoussac and saw the Hotel Tadoussac with its view out over the bay. Unfortunately we booked our accommodations in this area too late to get into this hotel. 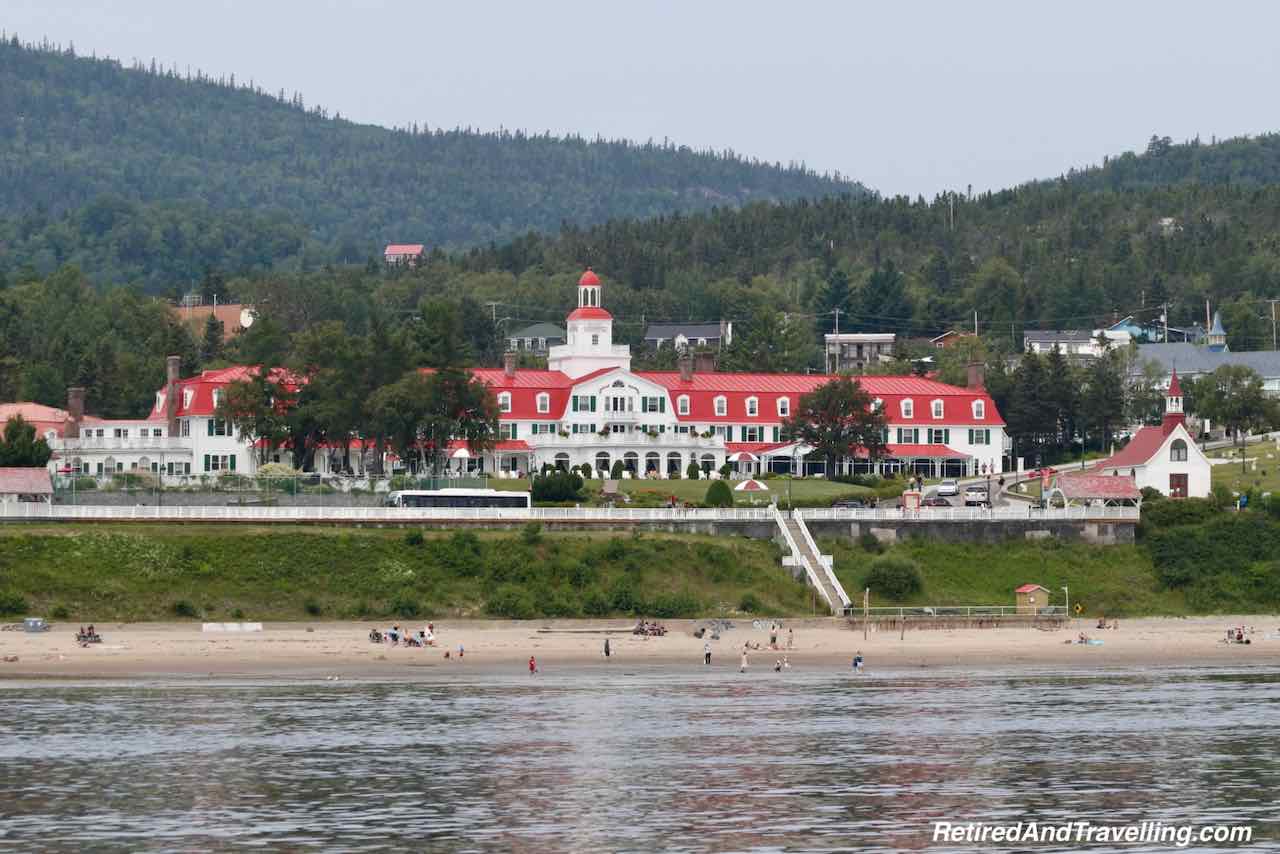 We thought that most of our whale watching from Tadoussac would be around the mouth of the Saguenay River because the belugas often came into the river. In fact, on some days, the whales were apparently quite visible from shore.

But we only rushed up the river at the very end of our whale watching excursion. We were sure that our 30 minute late departure short-changed us on the river part of our excursion. We saw some beluga whale heads off in the distance. 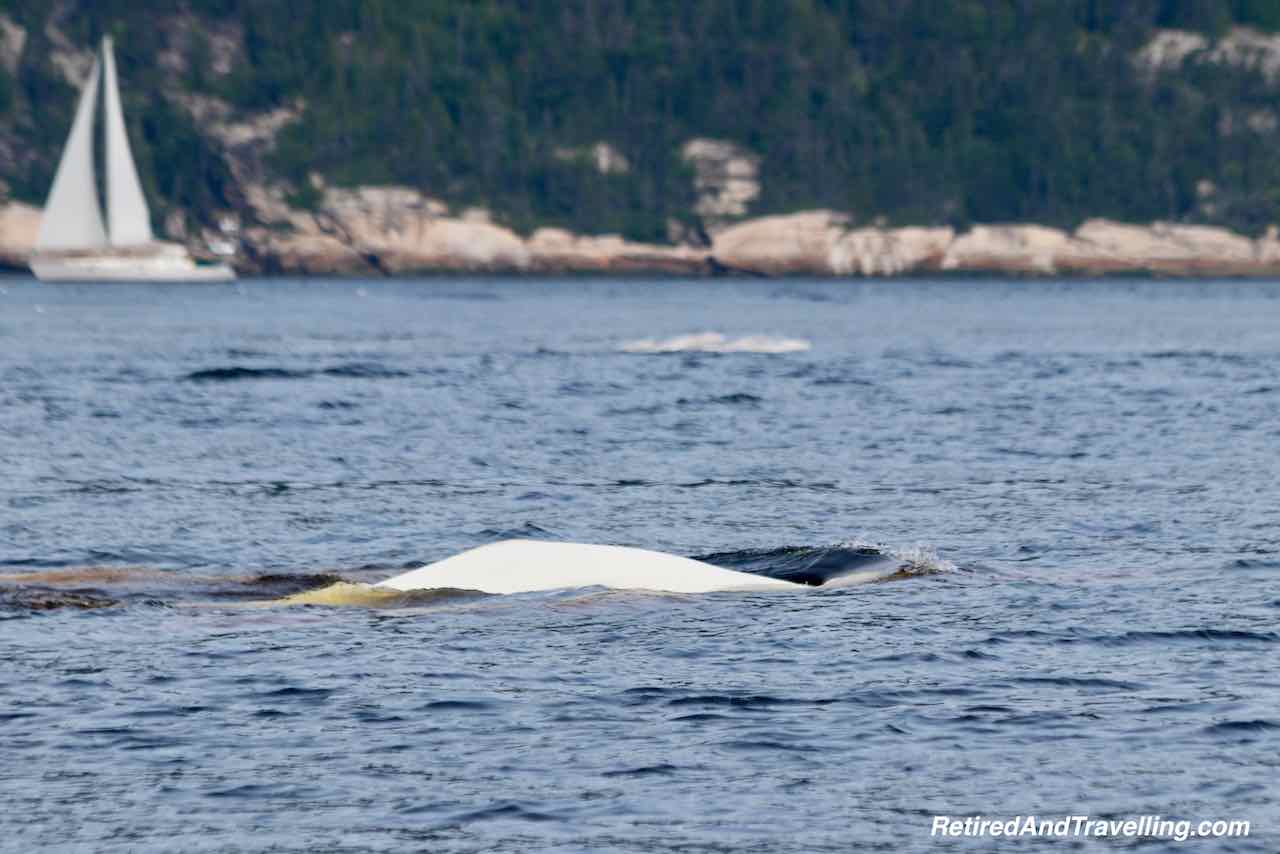 The ferries crossed back and forth as we watched for the beluga whales. We saw the long line up the hill waiting for the ferry. One of the reasons we stayed in Saguenay and avoided the ferry trip. And being late for our whale watching trip! 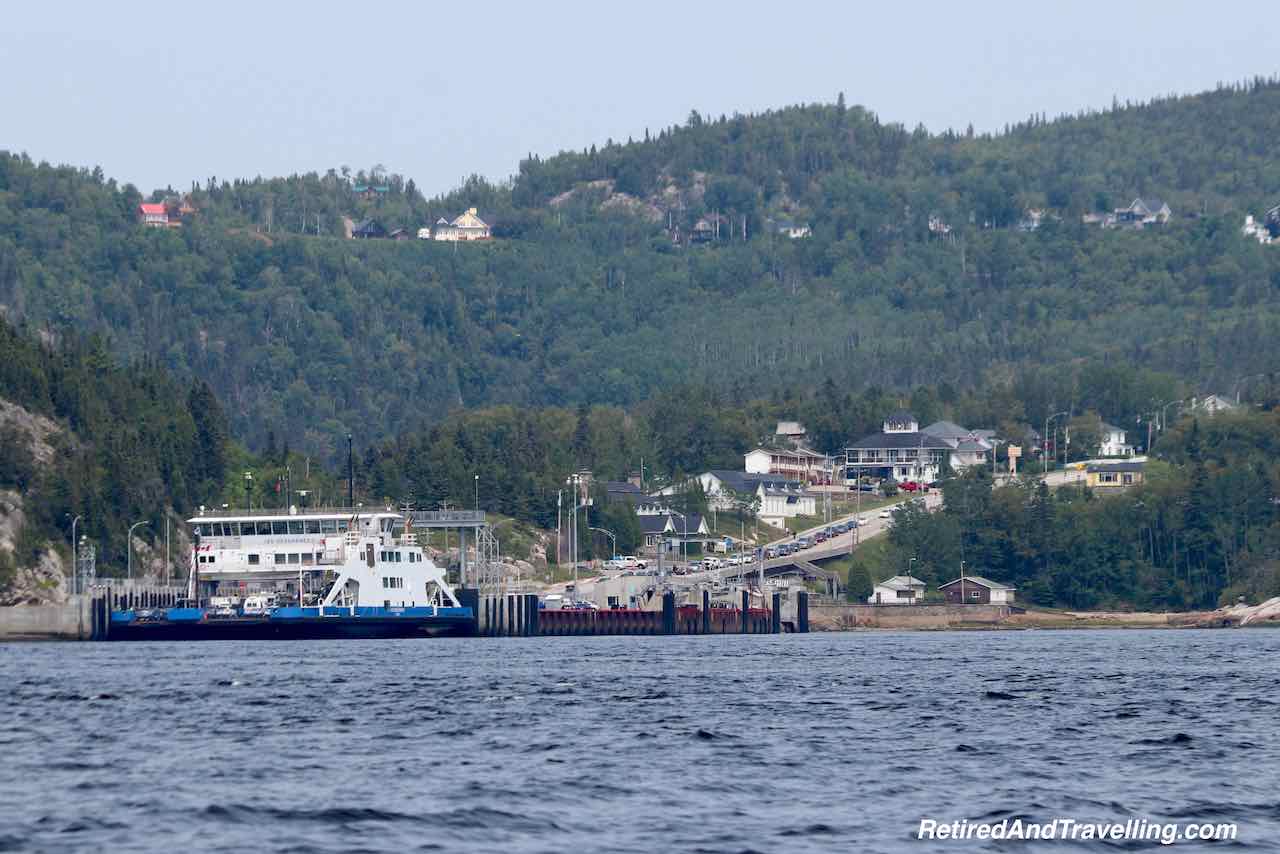 Having expected beluga whales in the Saguenay River, we ended our whale watching from Tadoussac a little disappointed. And wondered if our late departure shortened our fun.

The zodiac headed back to the dock and we all climbed out. It was chilly on the water and we needed the sweater and wet weather suit. But we peeled off two layers before we walked back to the shop and returned our gear.

Our whale watching excursion included a few other tickets. On our stay in Montreal, we got our Montreal harbour cruise for free. In Tadoussac we did not get free entry to the whale museum with our tickets. We looked at the whale statues outside the museum but did not go in. We had a ferry booked to cross the St Lawrence River to the south shore and we did not want to be the late ones for that! 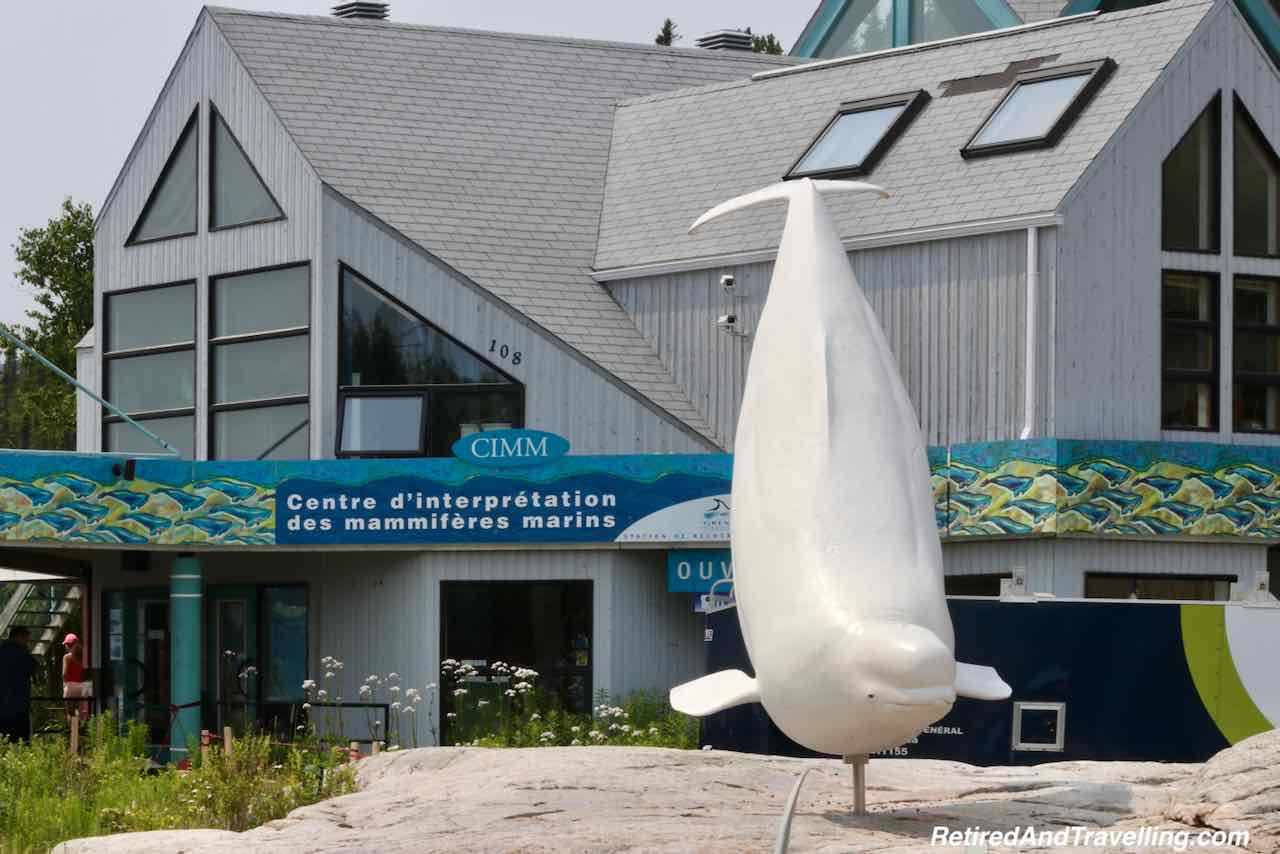 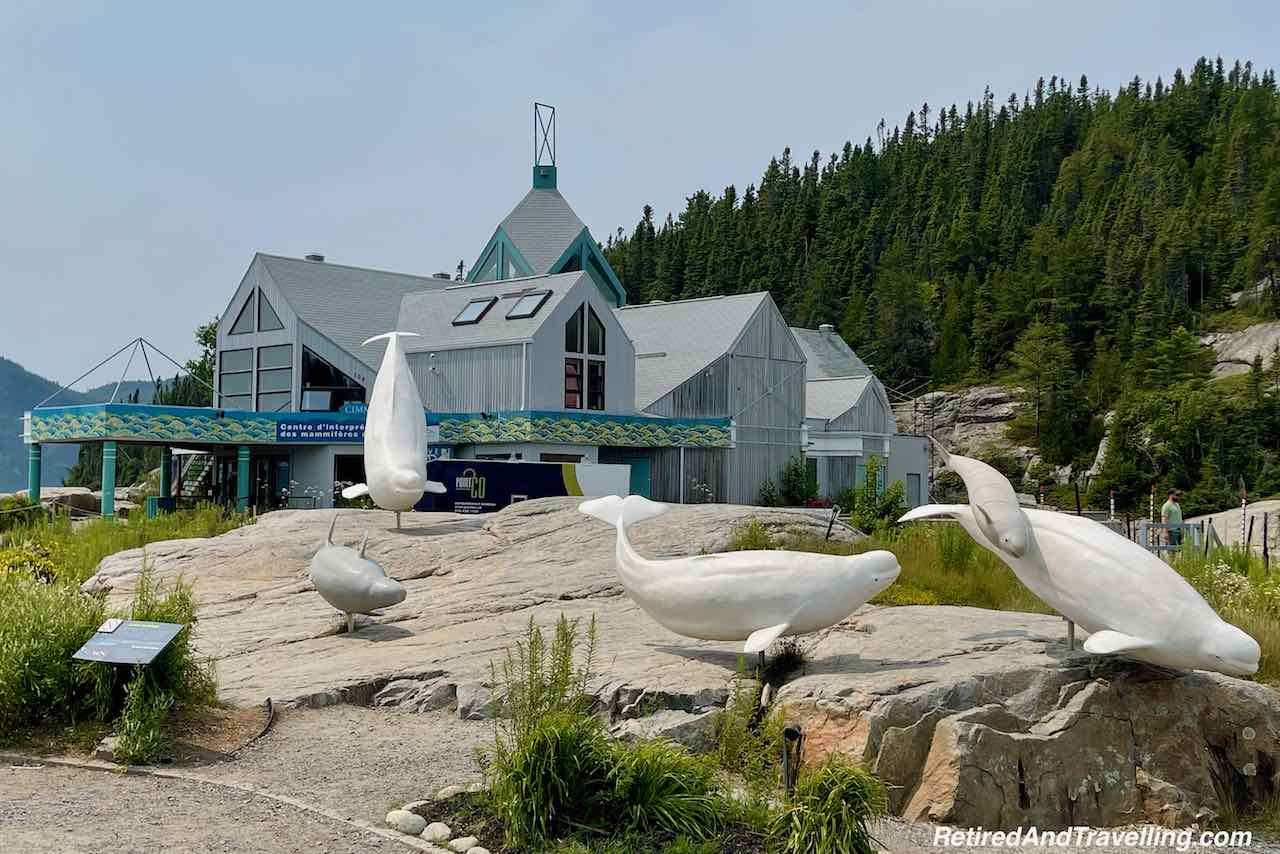 More Whales When We Crossed The St Lawrence

When we got on the ferry across the St Lawrence on our way to New Brunswick, we spent much of our time on deck. We saw a few lazy fin whales by the dock before we left. And we knew there were whales in the middle of the St Lawrence River.

Several times we saw whales in the distance. And once we even had a pod of belugas swim by. Although only those with zoom lenses or binoculars really saw the white heads as they bopped along. It was the perfect end to our day whale watching from Tadoussac. 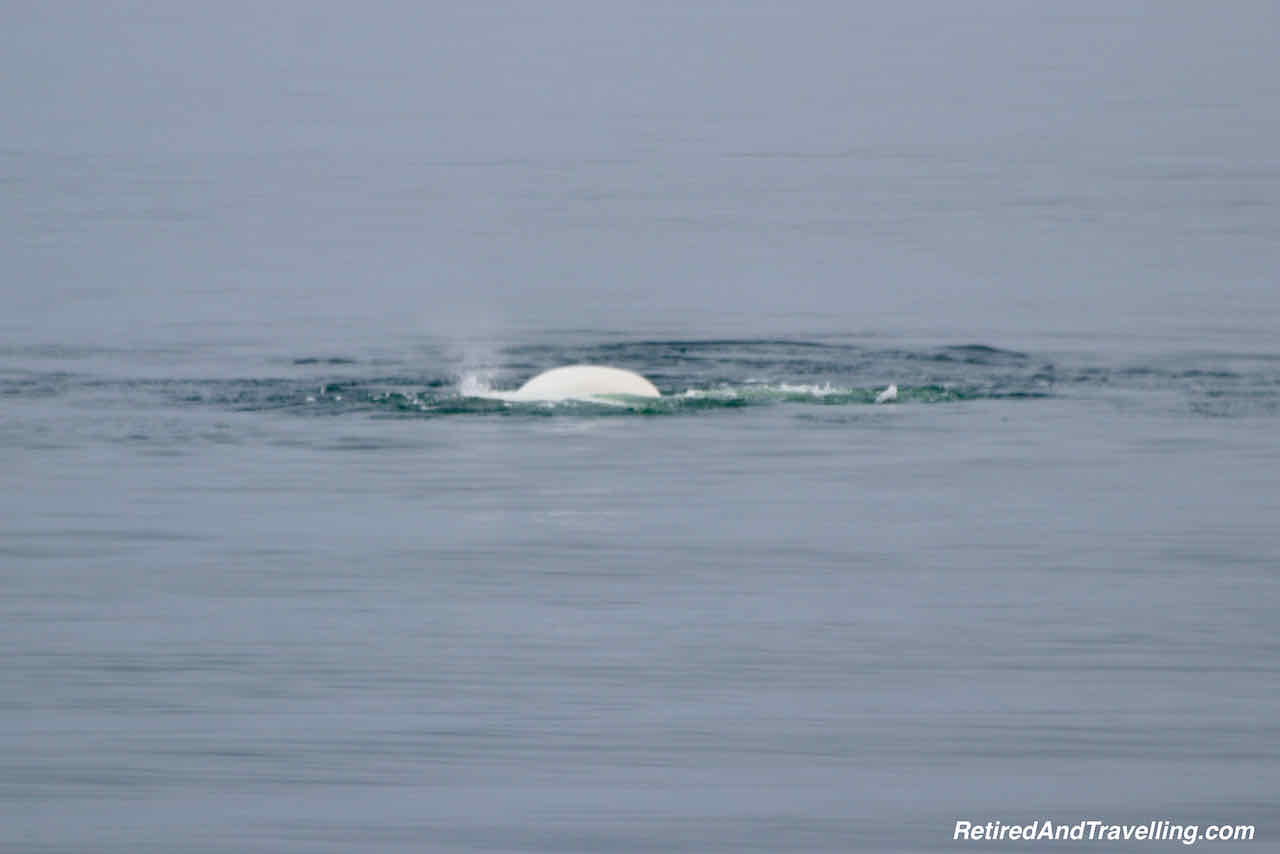 We were glad we booked to go whale watching from Tadoussac on our travels in Quebec. We had the perfect flat calm sea conditions for whale watching. Although the grey skies did not make the views dramatic. We were surprised at how lazily the whales moved. But then, with plentiful food in the area they did not have to work too hard to feed! It was great to see three different kinds of whales and especially good to see belugas!

When we drove around the coast in New Brunswick and then later in Newfoundland, we kept a watchful eye out for more whale sightings. Whale watching we definitely we looked forward to on our road trip in Eastern Canada.

Have you gone whale watching from Tadoussac Quebec? Did you get a great whale show? 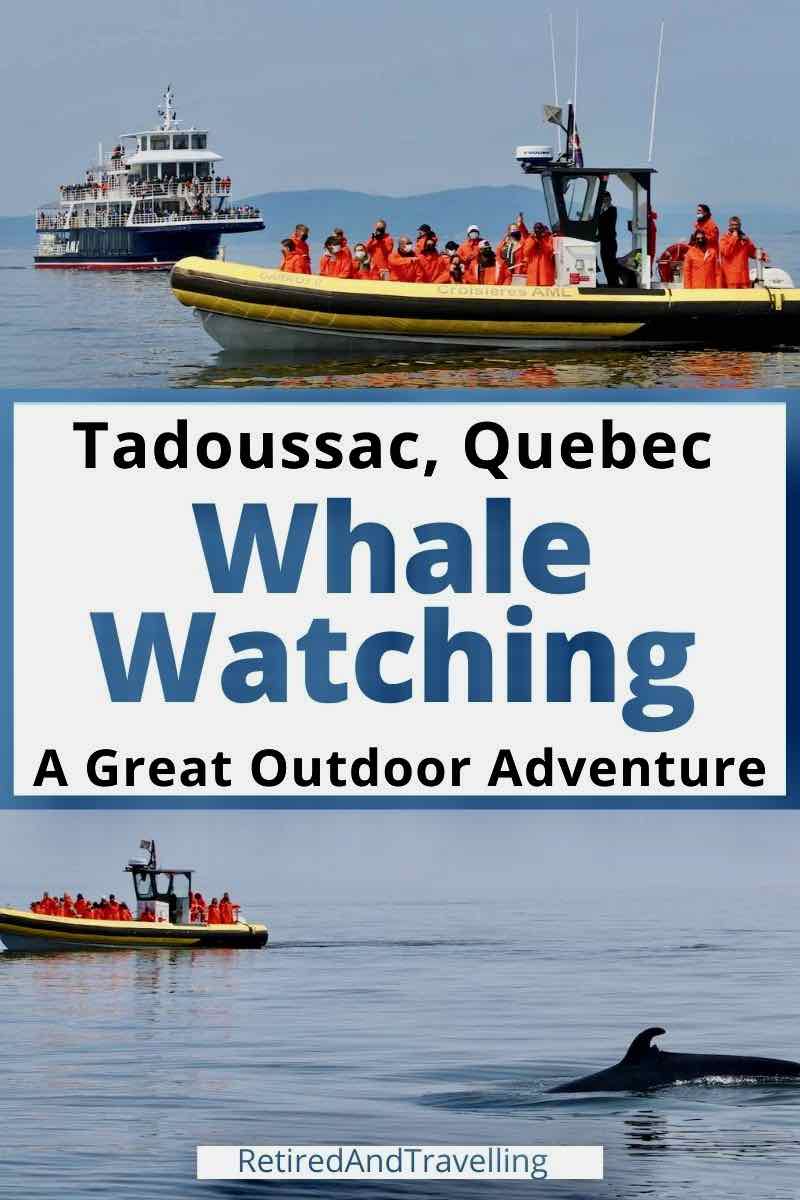 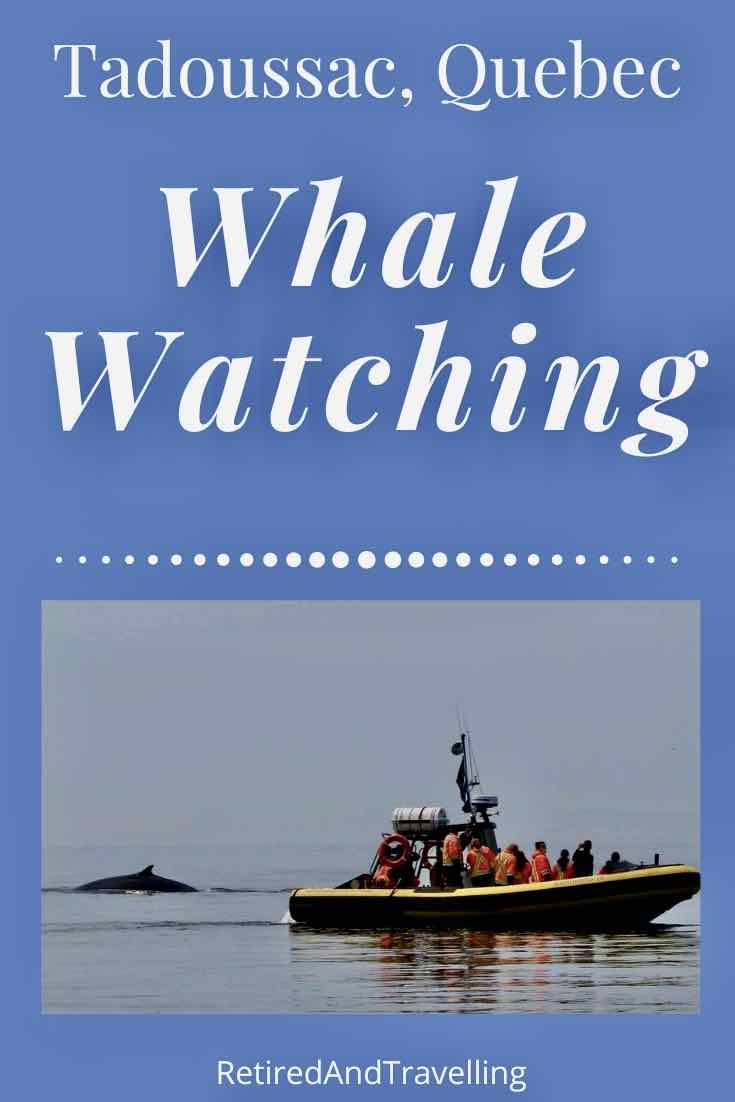 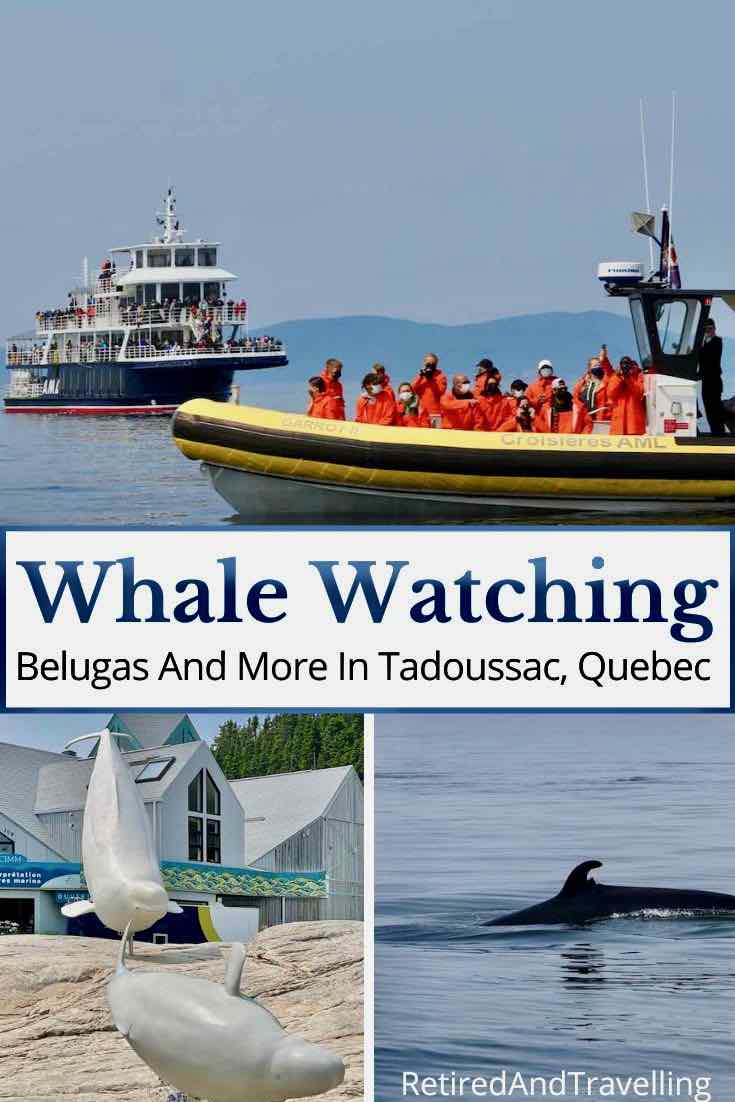