Mortuary Temples on the West Bank

We visited the temples on the East Bank – both the Karnak Temple at day and night and the Luxor Temple. We would visit the Egyptian tombs in the Valley of the Kings on our second day in the Luxor area. While the tombs were meant to be sealed for eternity, the mortuary temples on the west bank were built to worship the dead pharaoh.

We toured the massive Medinet Habu Mortuary temple built for Ramses III. We stopped at the outside gate of the Mortuary Temple for Queen Hatshepsut. Our final stop was for photos at the Colossus of Memnon which used to the the entry port for the mortuary temple for Amenhotep III.

Medinet Habu was the mortuary temple for Ramses III. Entering through the Migdol Gate, you get a first sense of how big this temple is. It is one of the most impressive mortuary temples to visit. 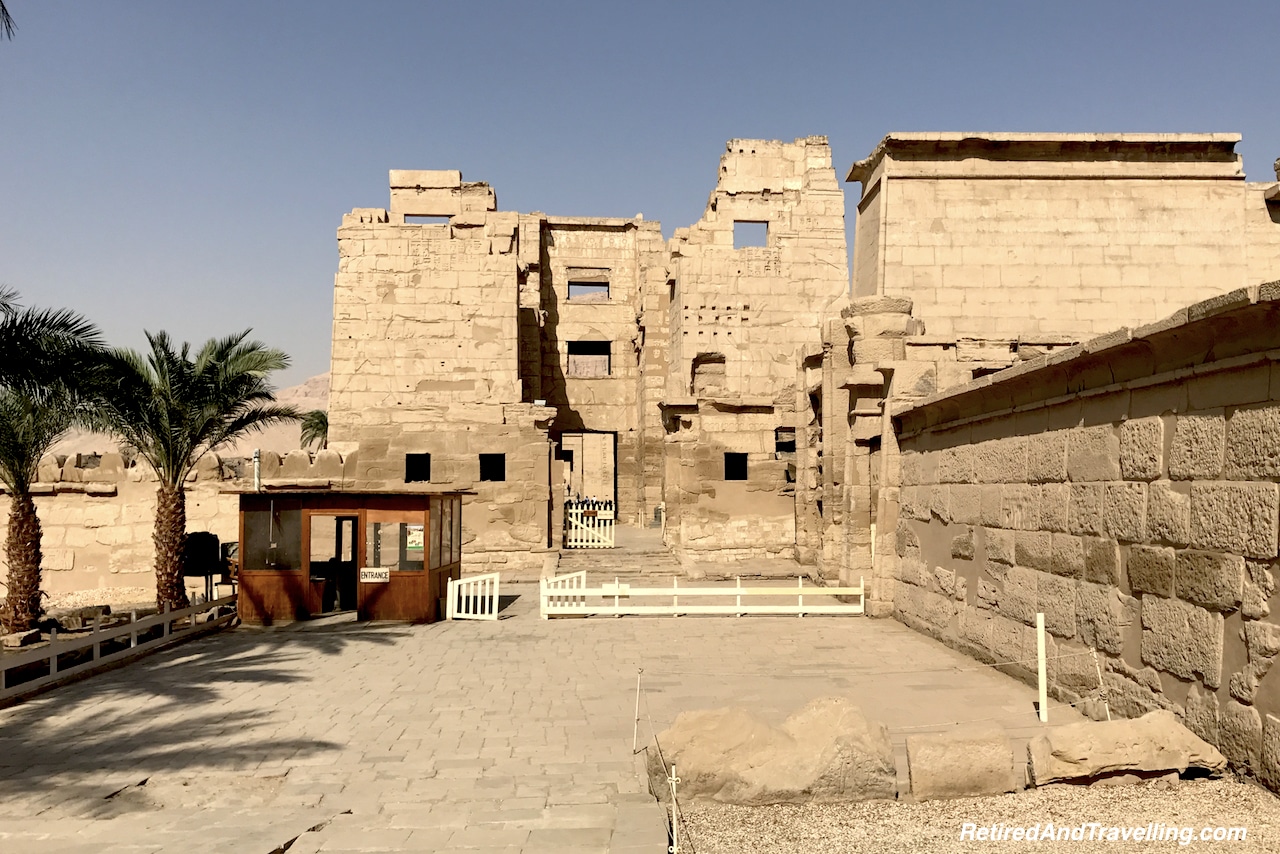 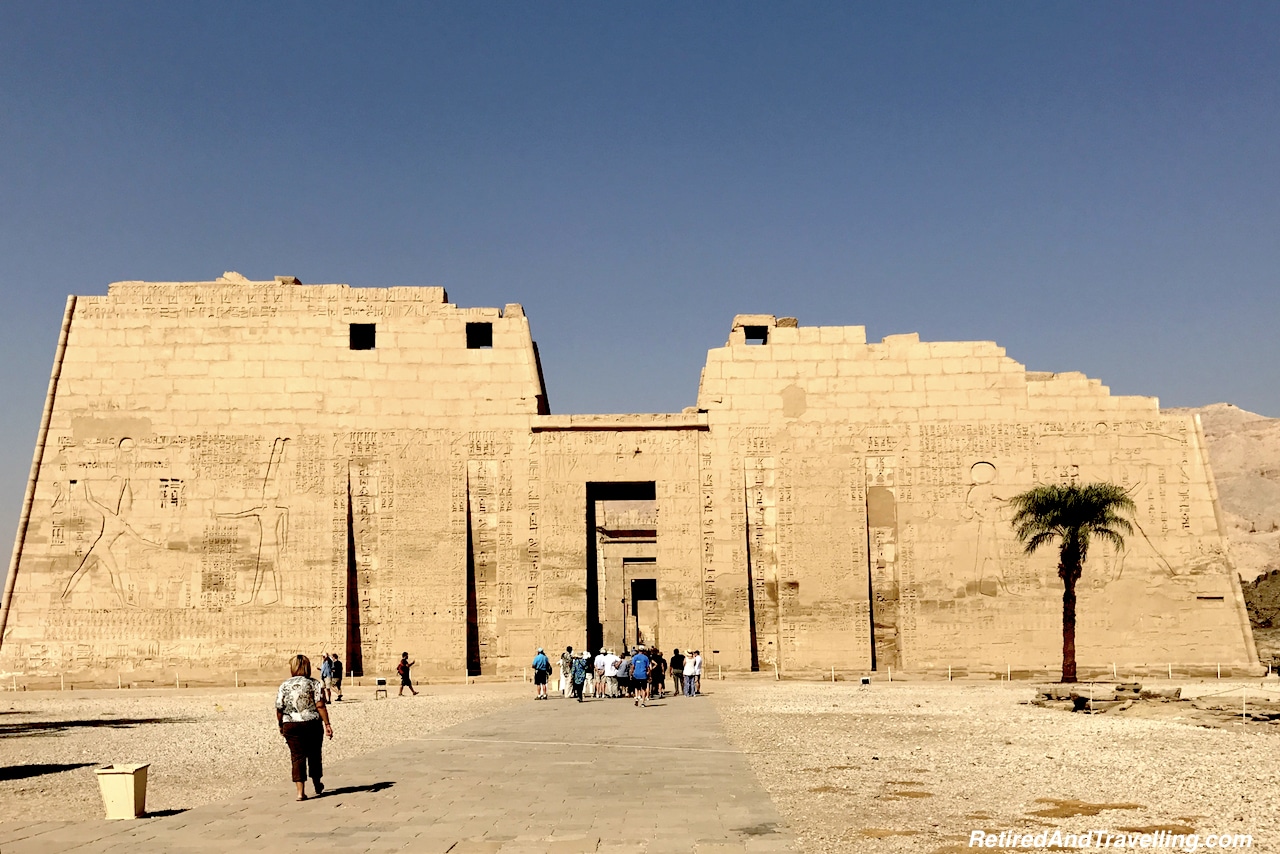 To the right of the Migdol Gate is the Small Temple. This was built and partially decorated by pharaoh Hatshepsut. As in her own own temple, her images were defaced by multiple successors. Not much of this temple remains today. 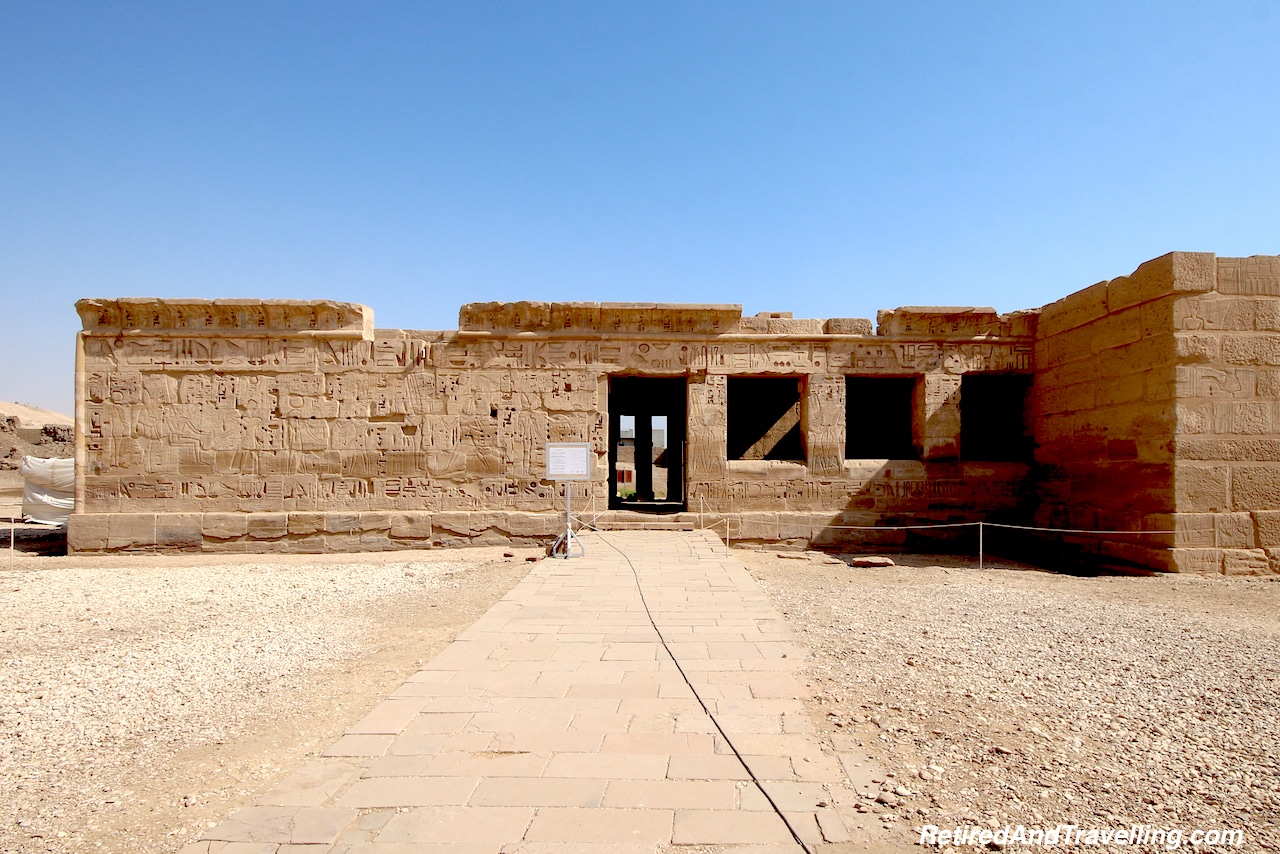 Across from the Small Temple is the Chapels of Votaresses. This was added by the Nubian kings and was active as a place of worship well after the temple was abandoned. On the far right is the Sacred Lake. Childless women would come here to bath and pray to Isis the fertility goddess.

The first pylon is impressive. The reliefs show Ramses defeating the Nubians and Syrians. 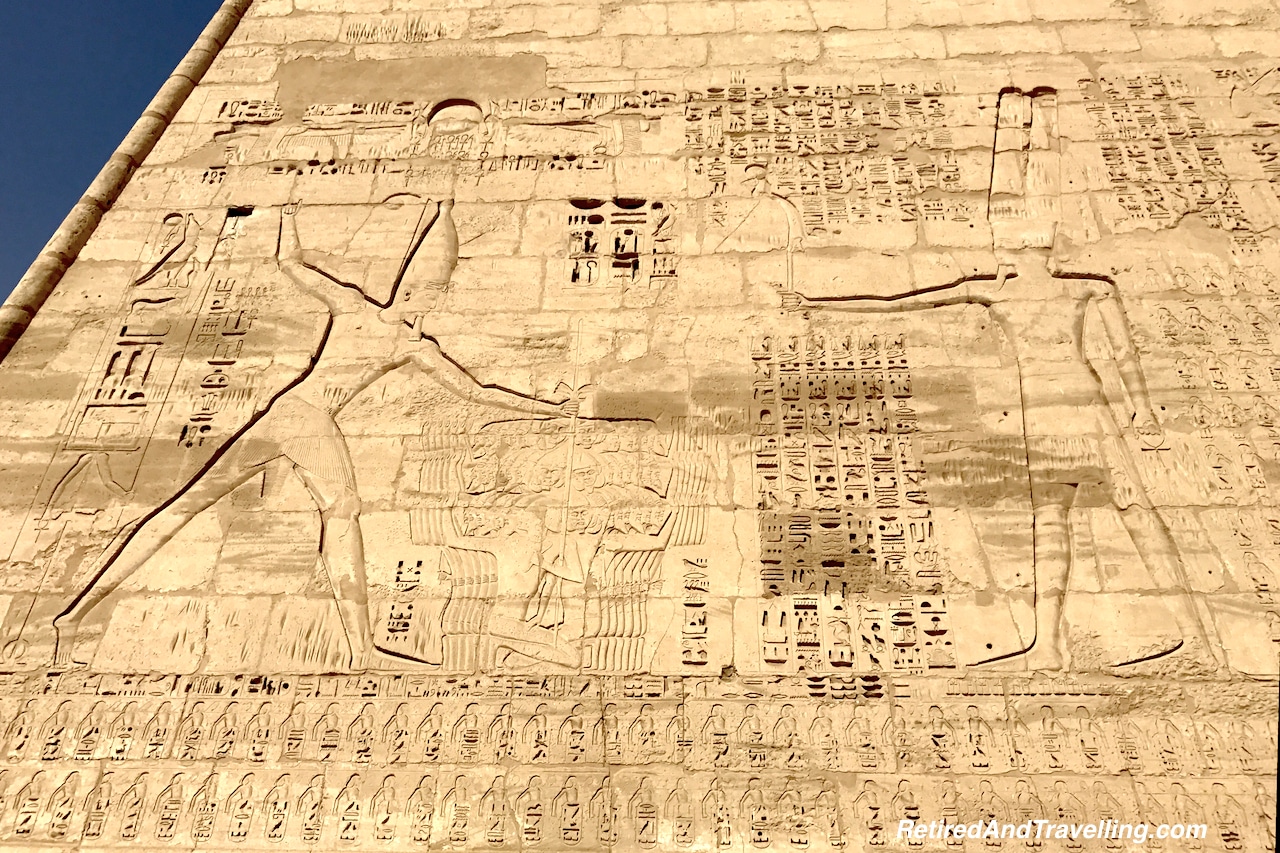 An interesting statue of a pharaoh that looks like a cat guards the entrance. Reliefs on the inner walls as you go through the First Pylon show actual battles. Ramses is seen scattering the Libyans with his chariot. 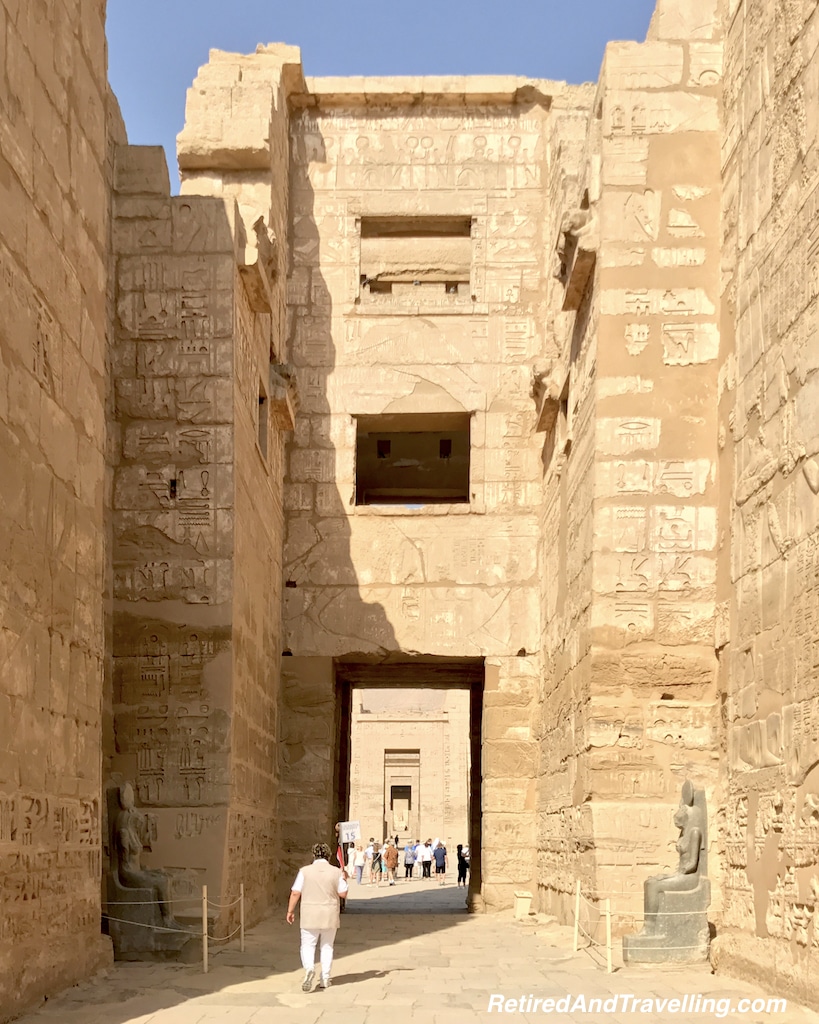 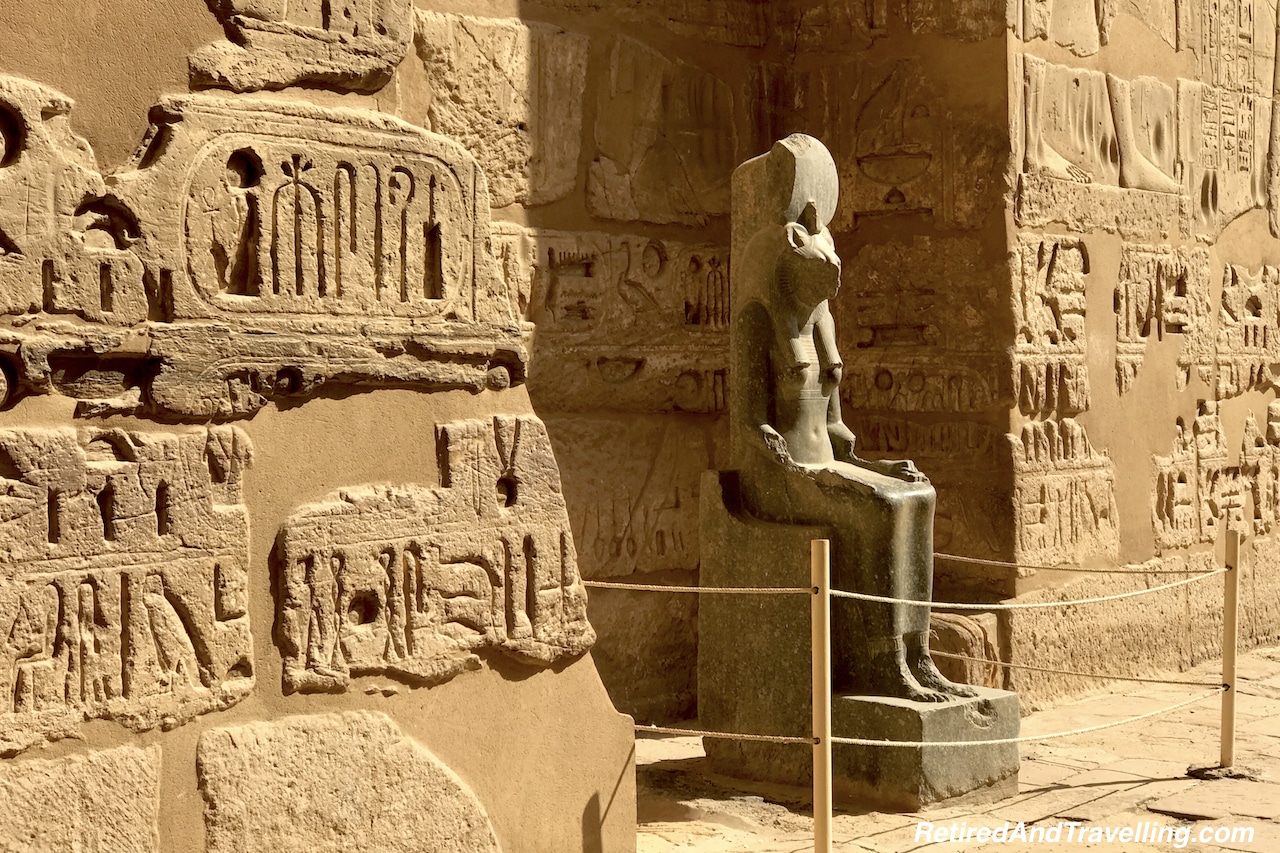 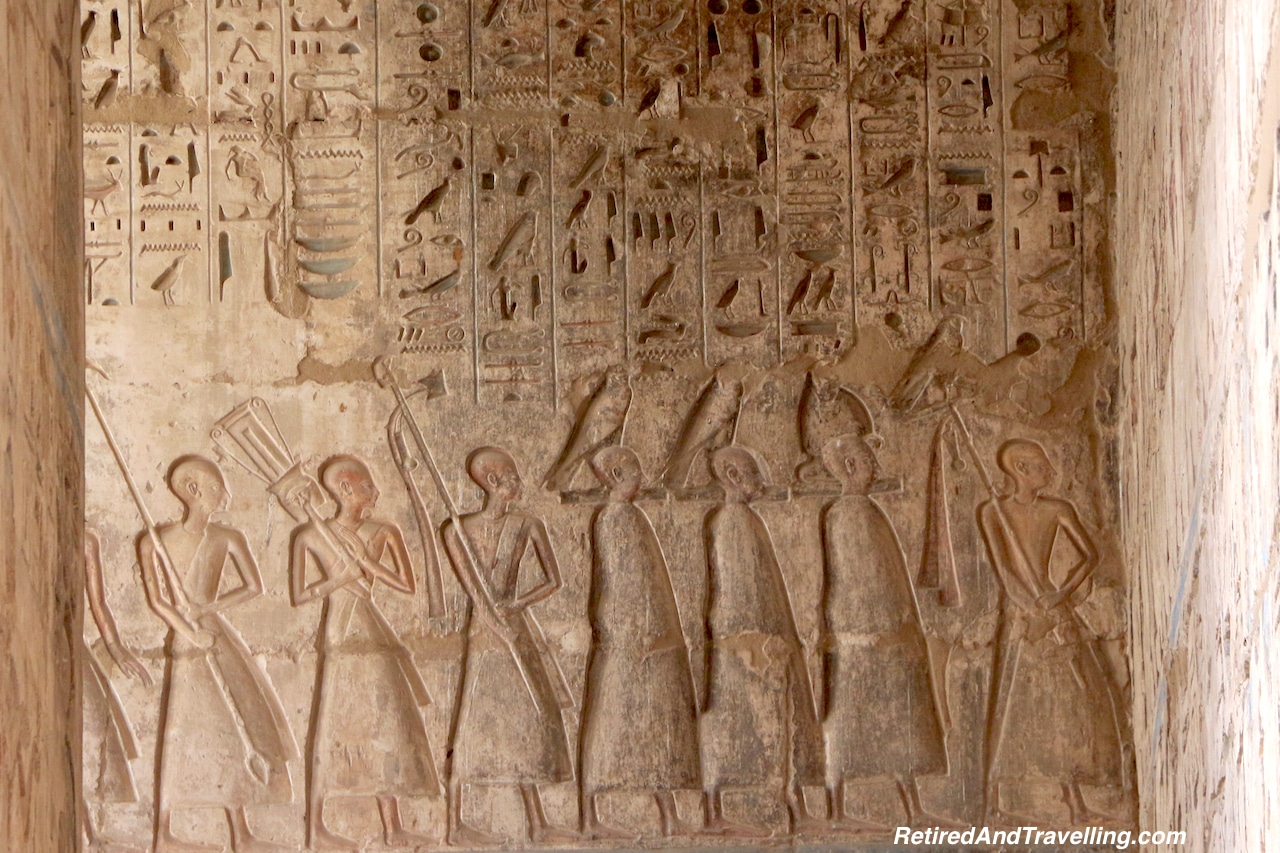 The First Court and the Royal Palace of Medinet Habu

Entering the first court we found a large area flanked by columns. On the right side the Osiride statues of Ramses III show him attended attended by knee high queens. 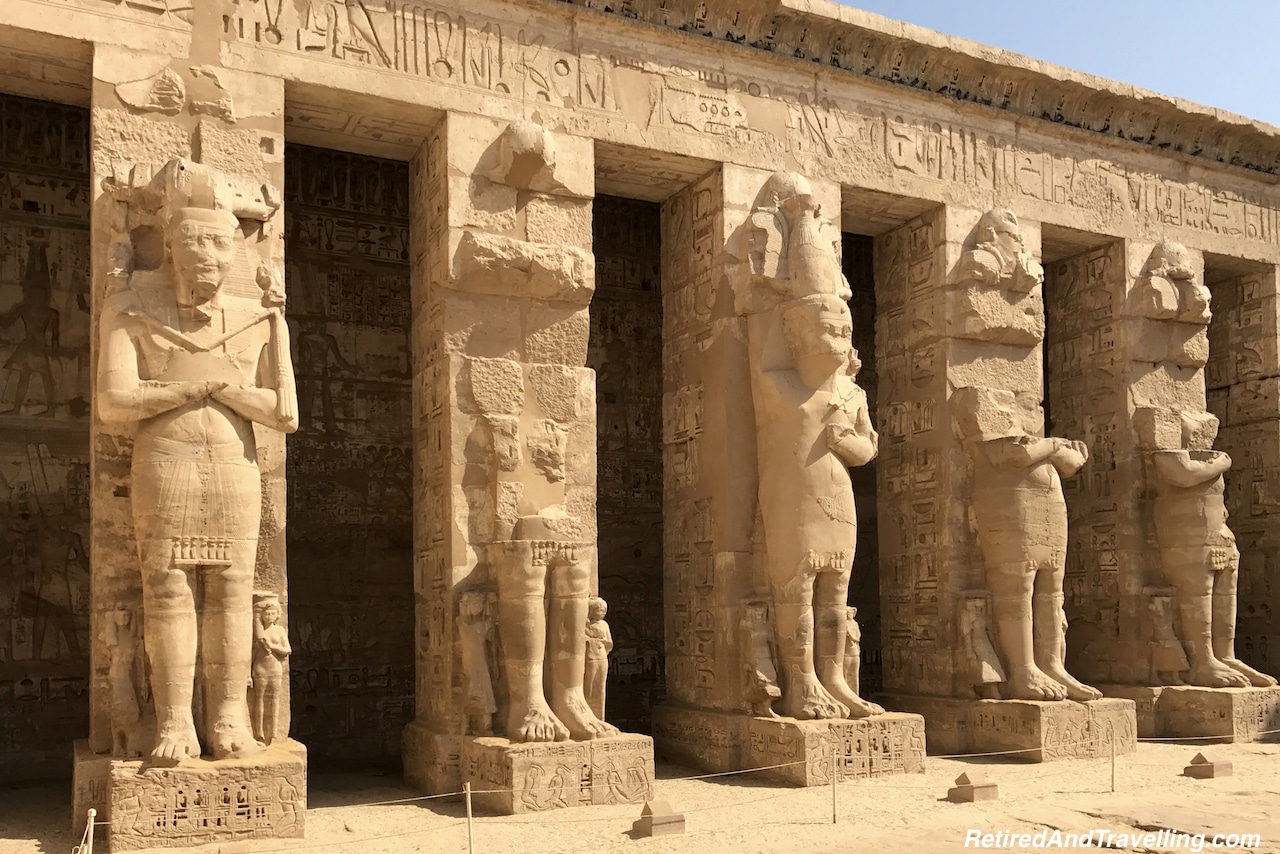 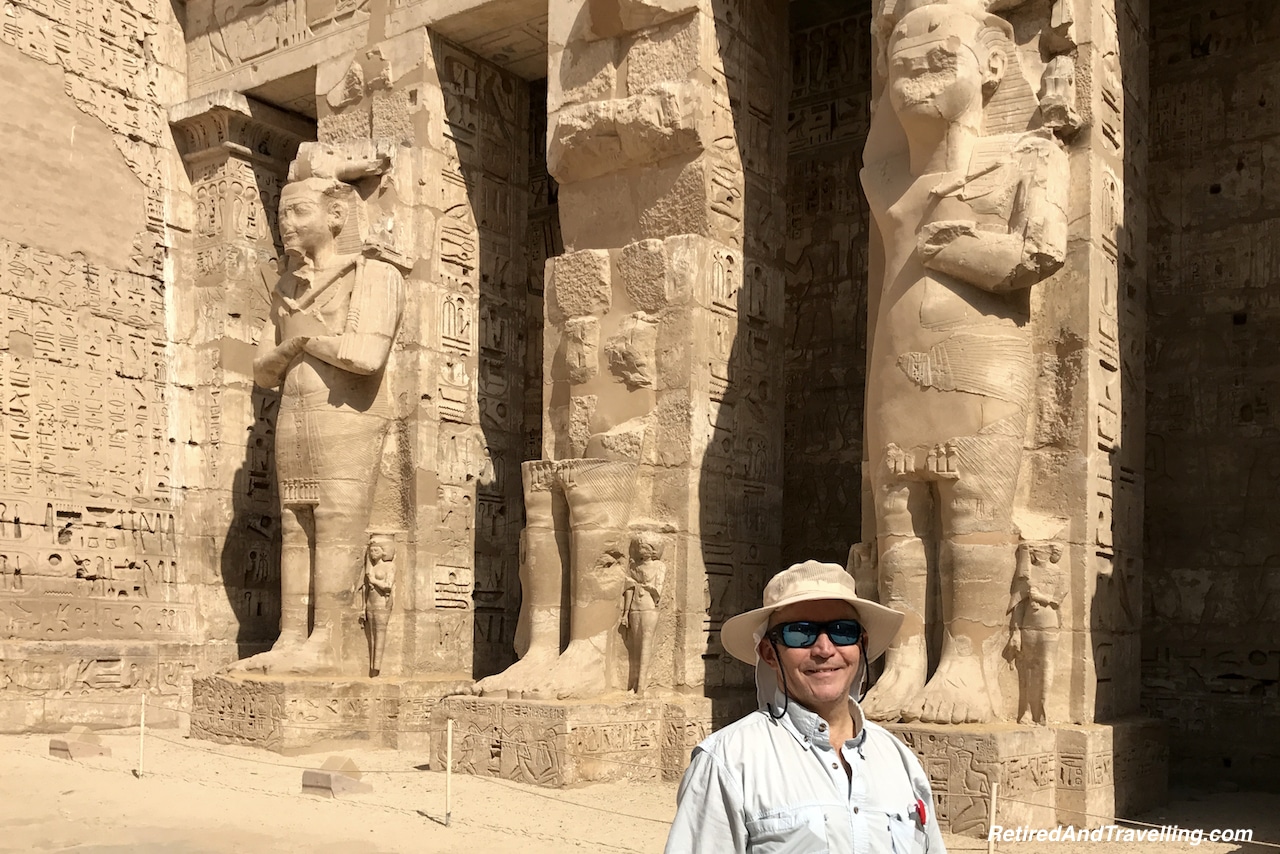 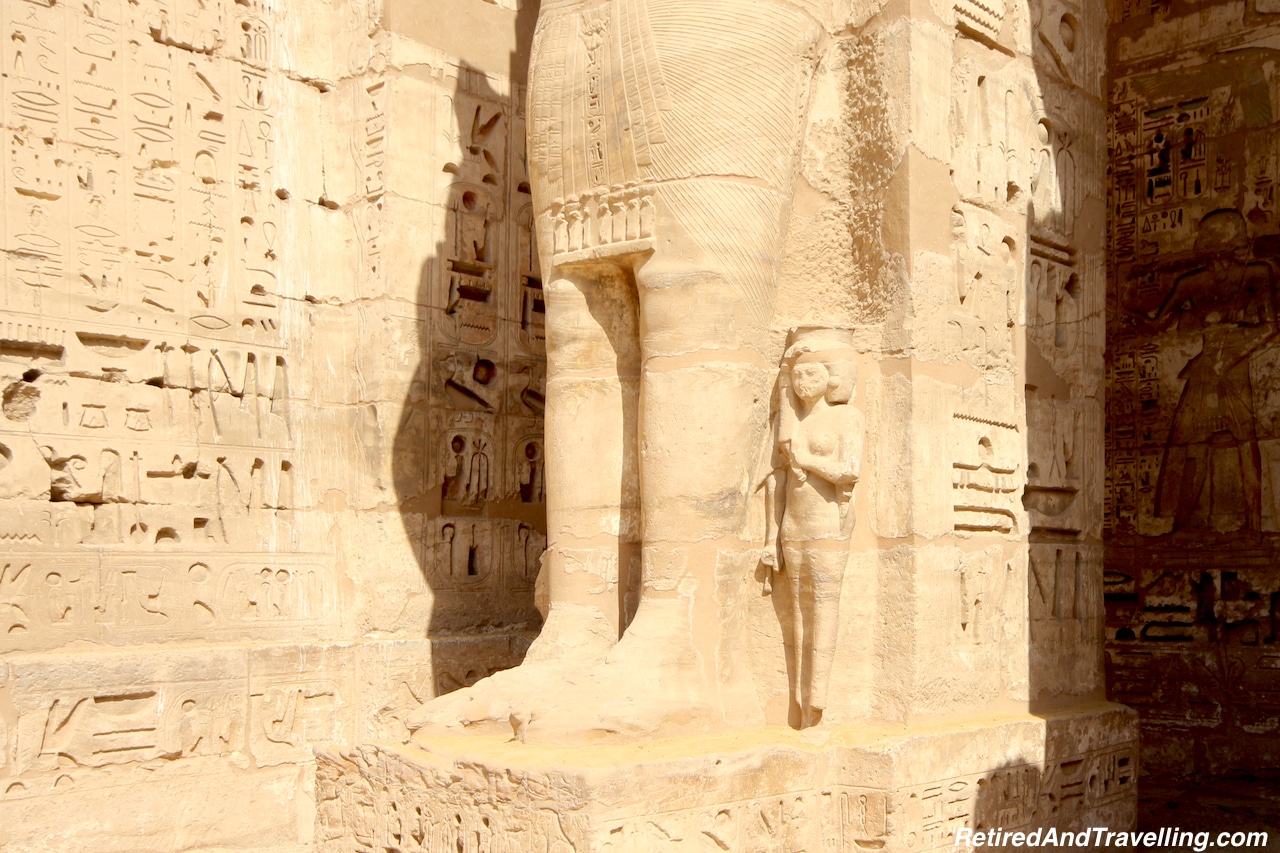 This left side adjoins the ruined Royal Palace. On the adjoining wall you can see the Window Of Appearances where Ramses rewarded followers with golden collars. 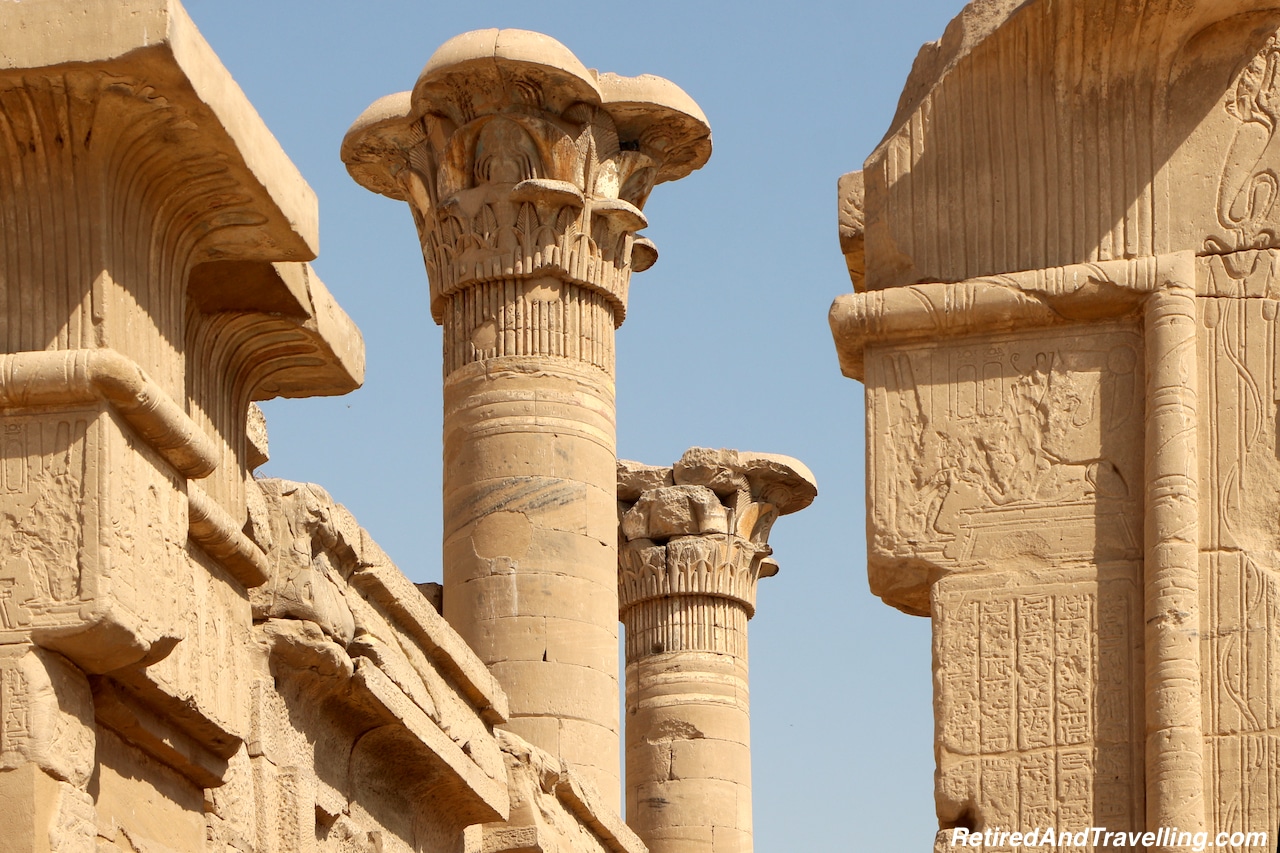 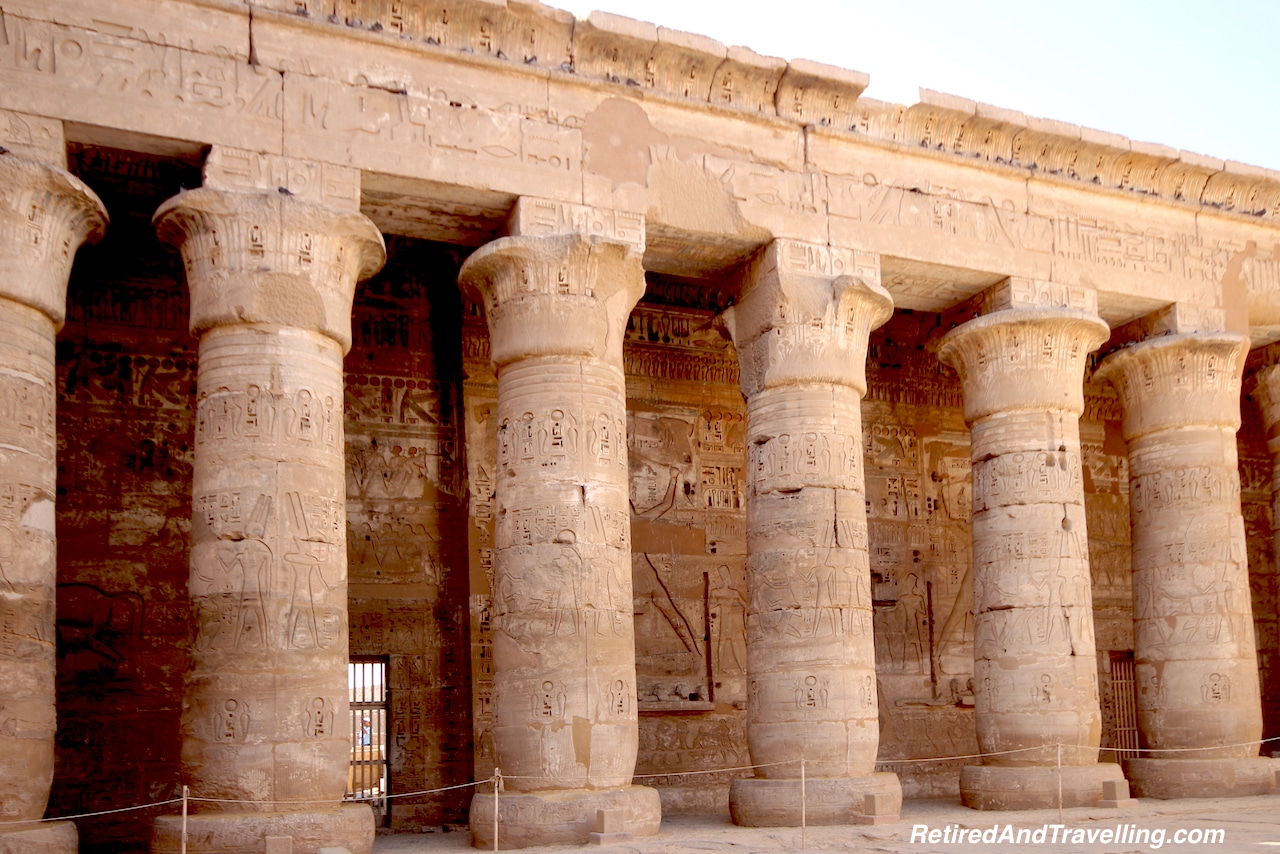 We had walked around the Royal Palace before entering through the first pylon. There is very little left standing. 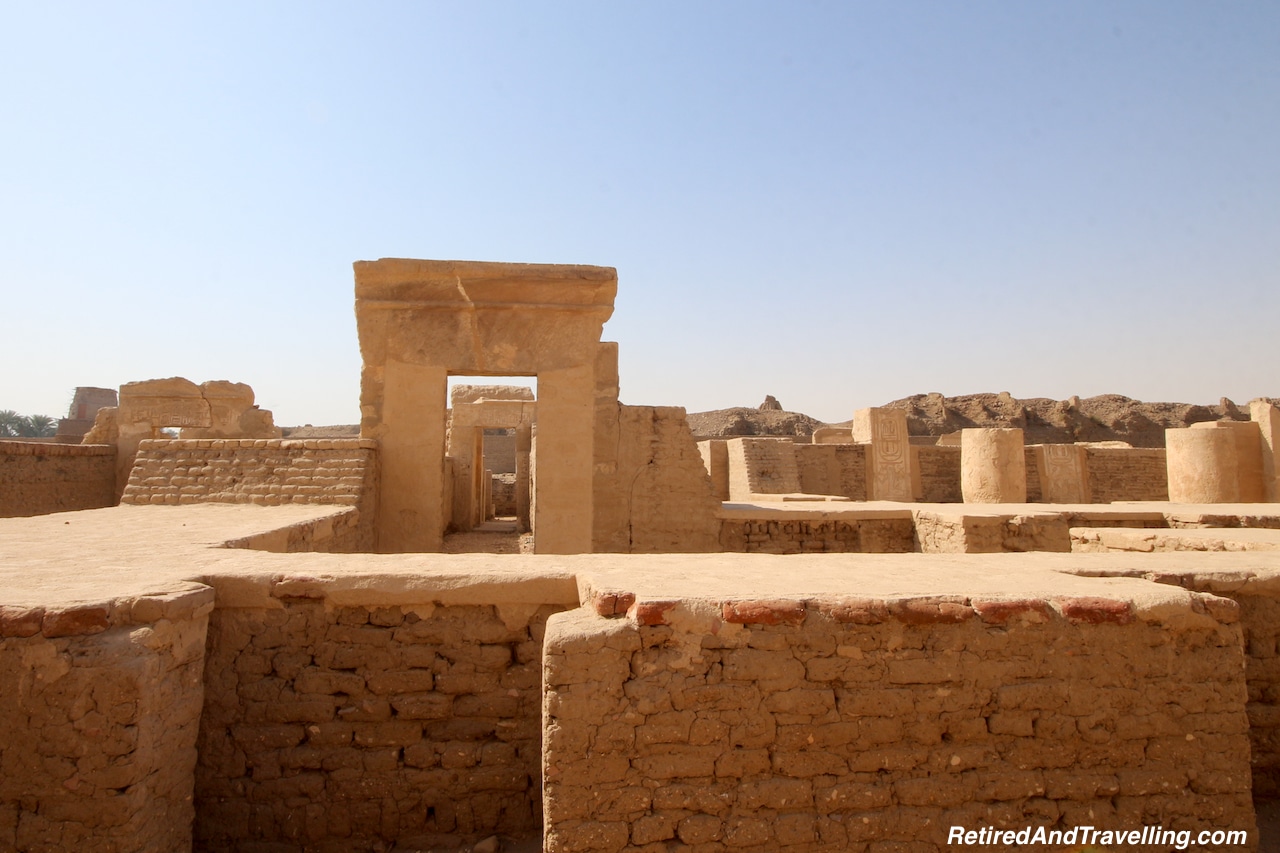 You could see the Window of Appearances from this side. 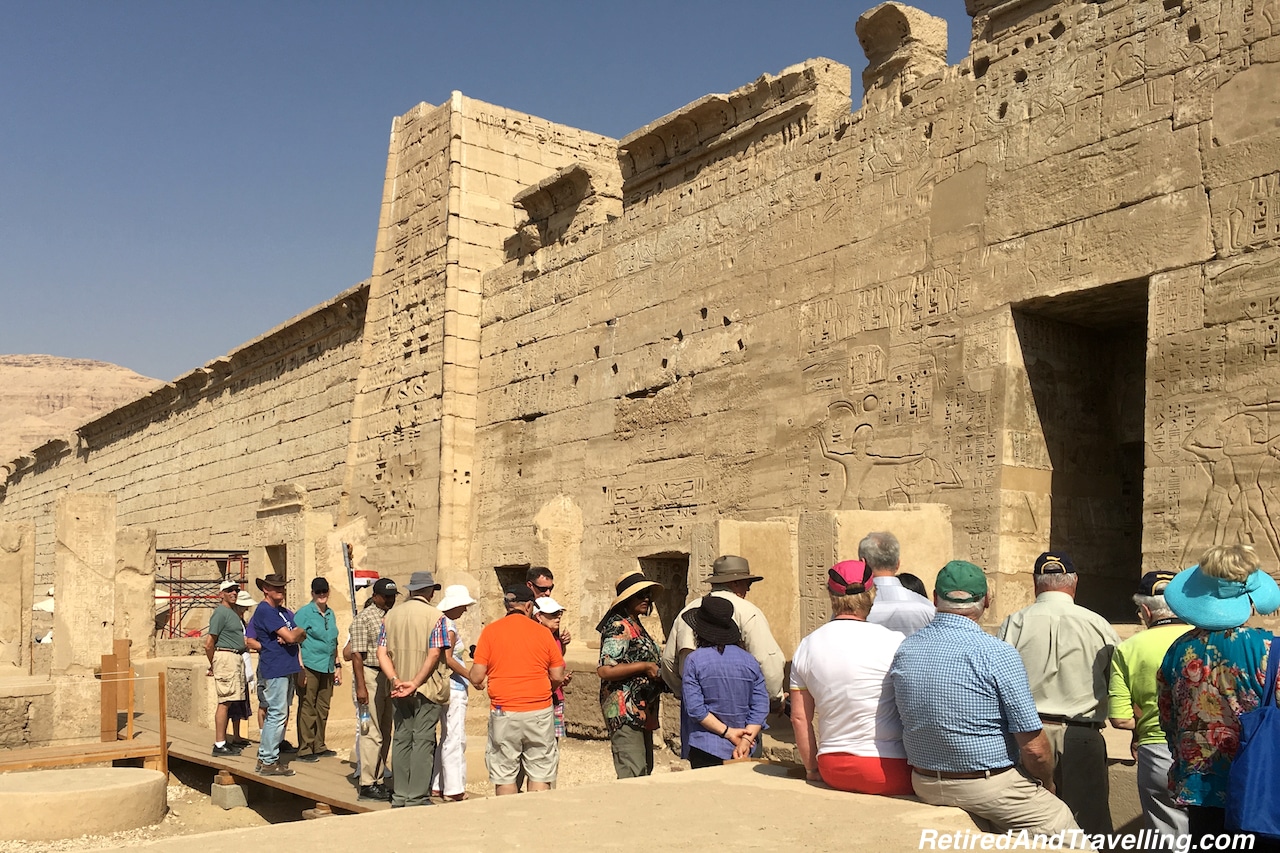 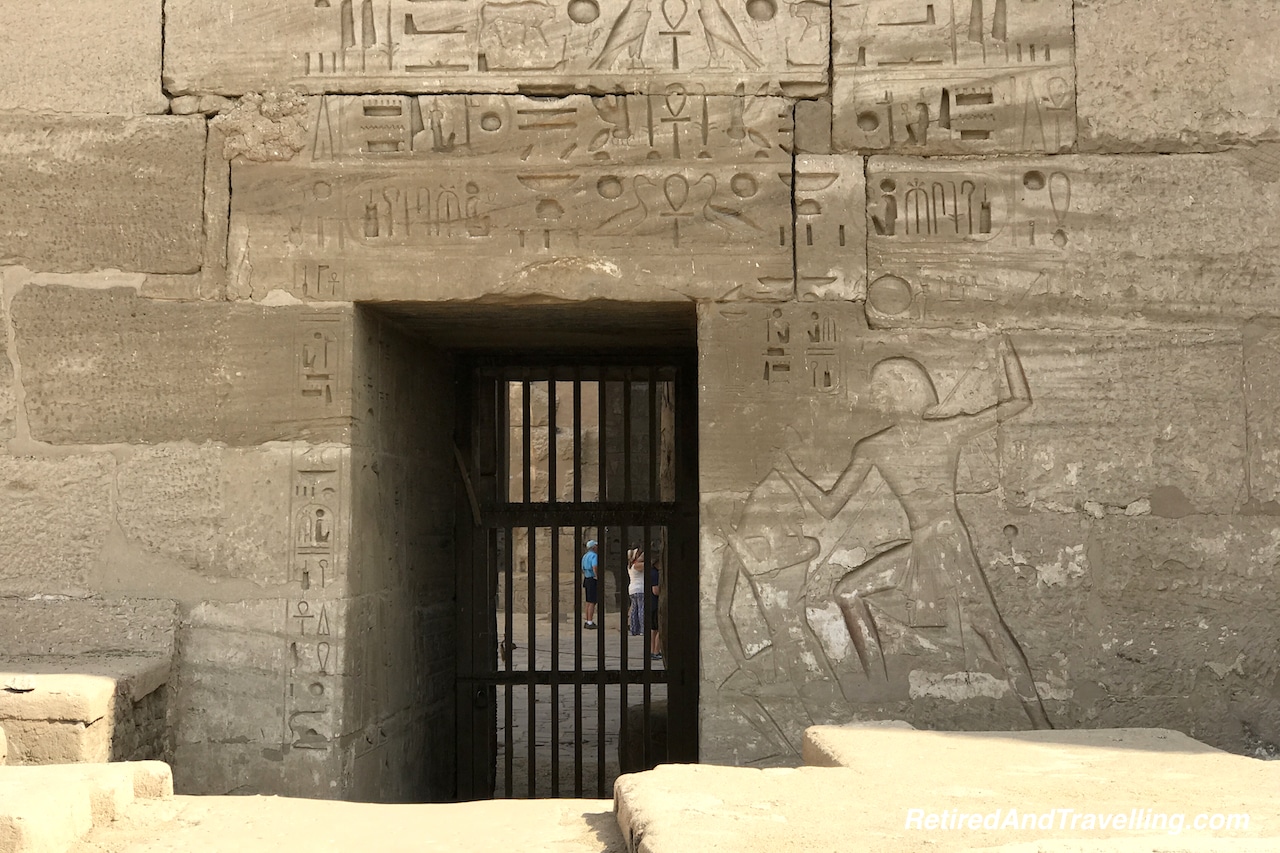 The walls on this side were well decorated with stories and hieroglyphics. 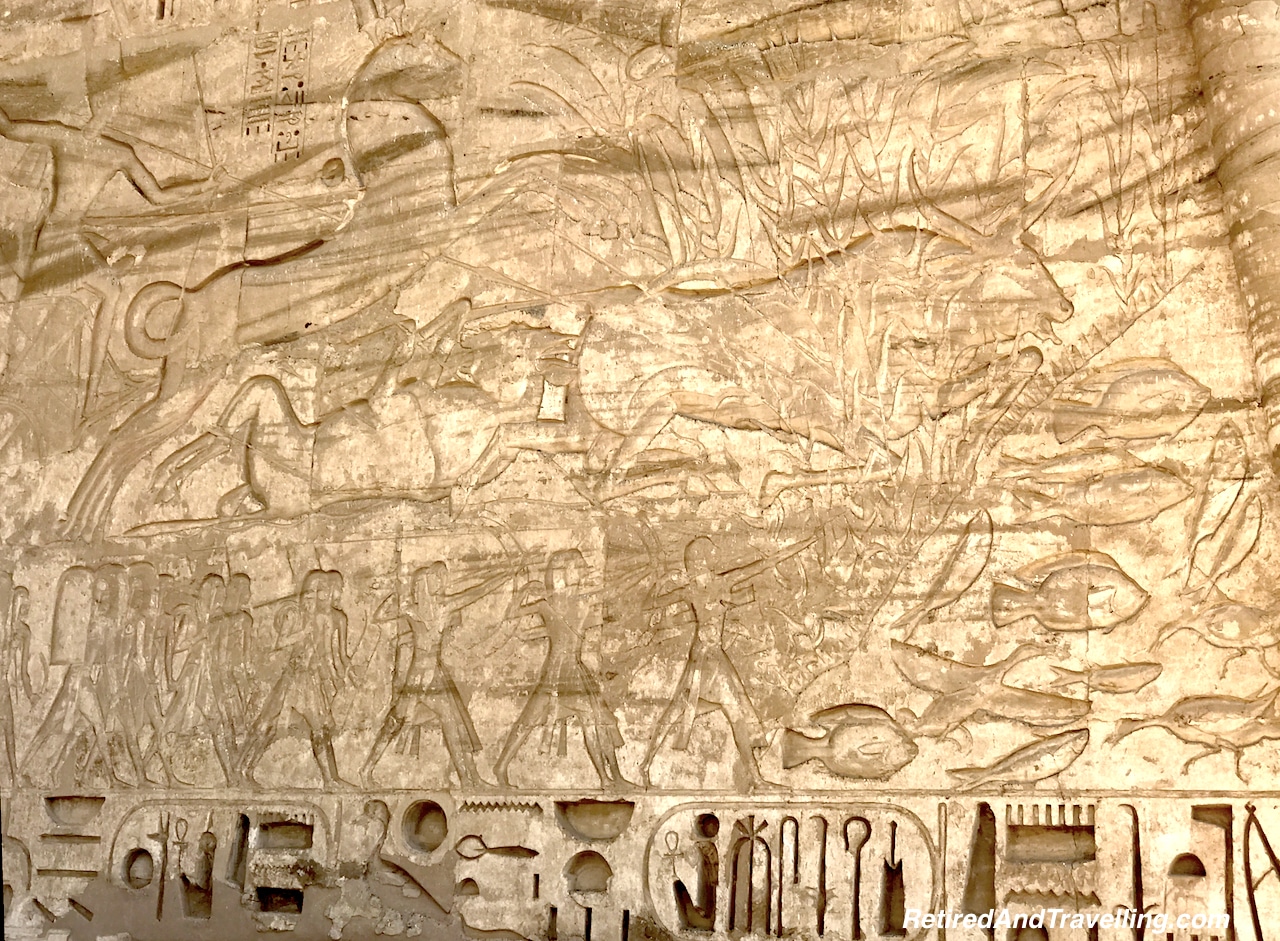 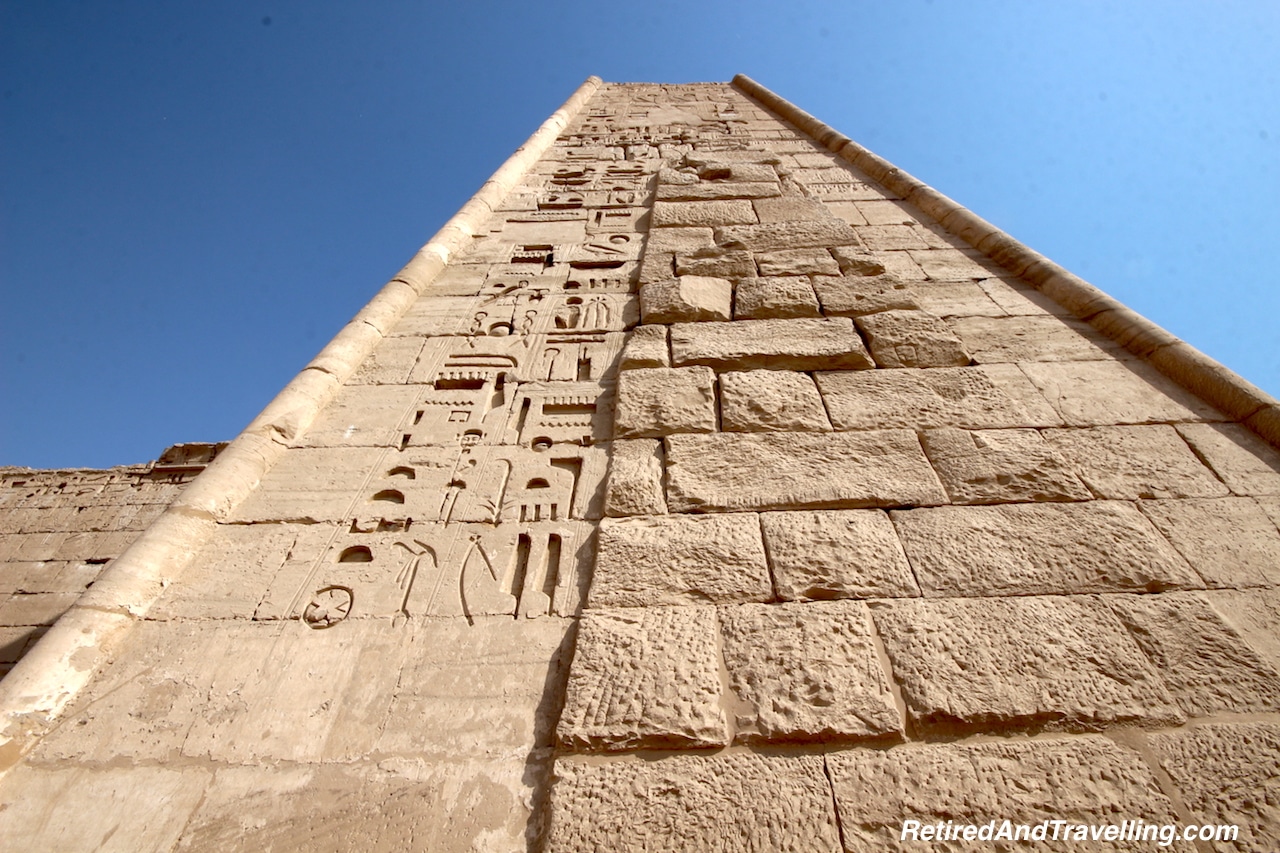 The Second Court of Medinet Habu

On the outside of the second pylon, reliefs show Ramses leading 6 rows of prisoner to Amun and Put (left). 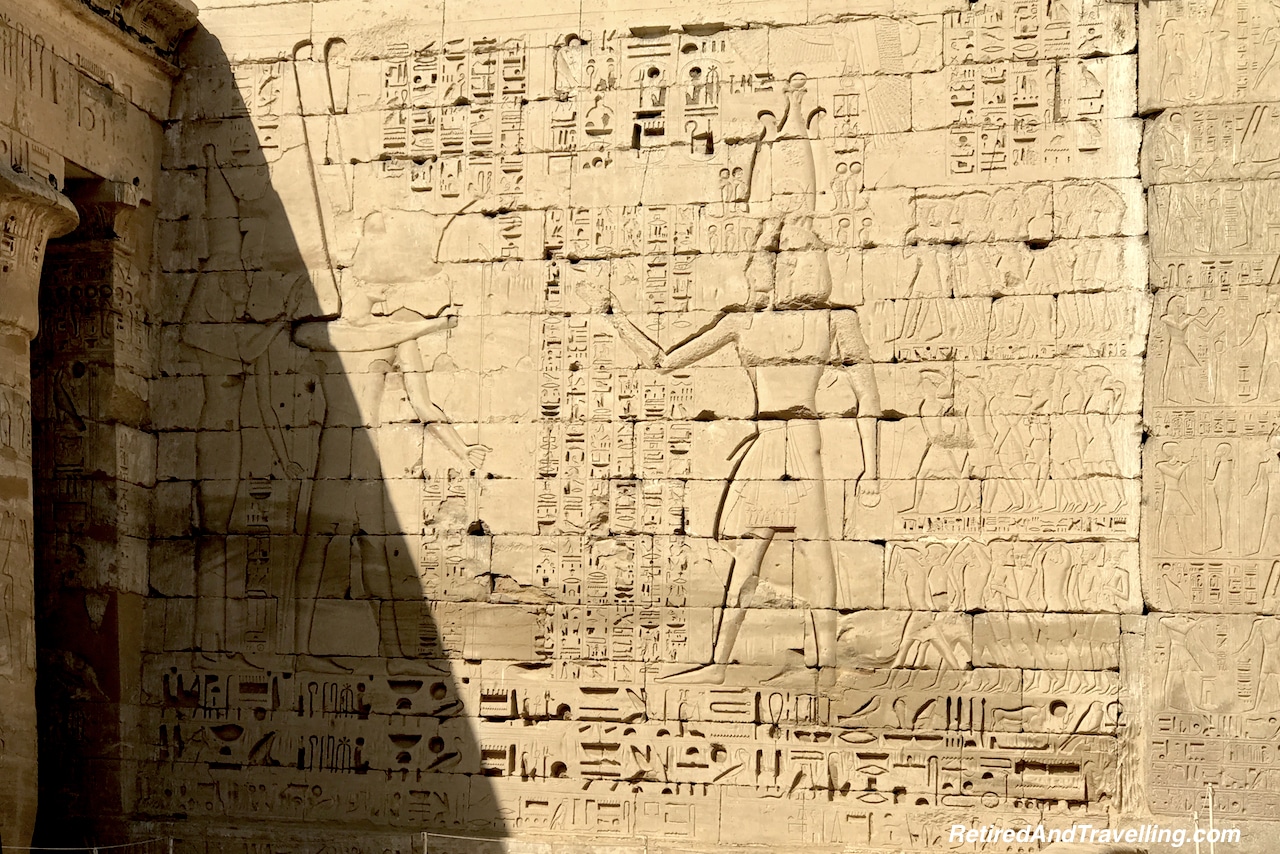 The ceiling of the gateway remains quite colourful. The walls are decorated with stories and hieroglyphics. 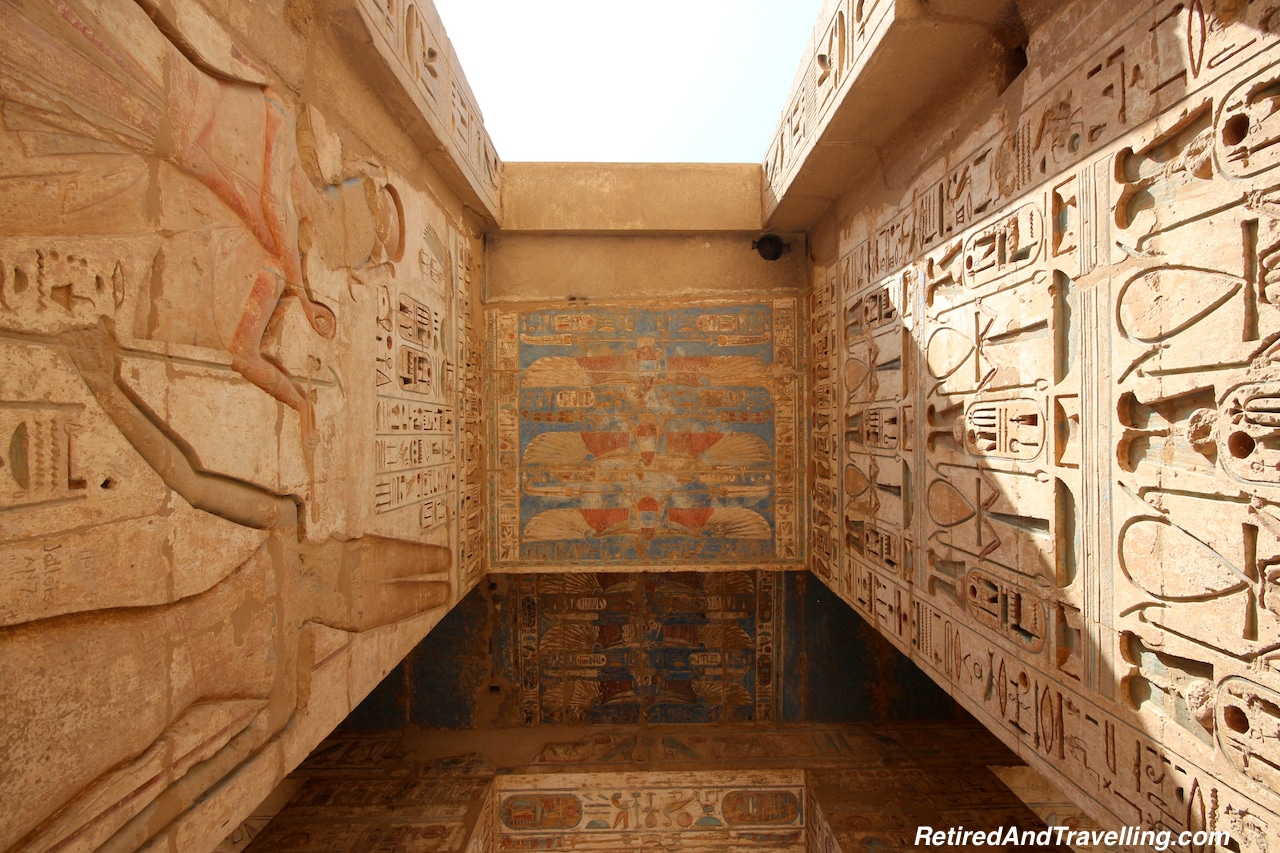 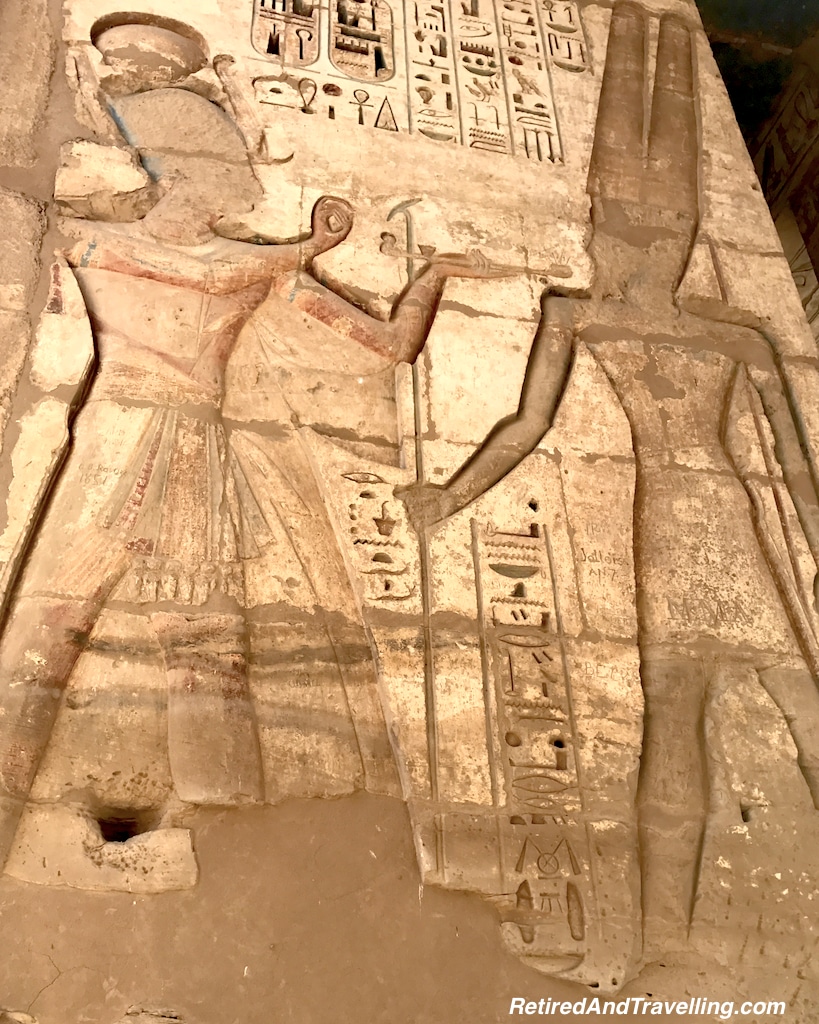 In later times, the Second Court was used as a Christian Church and the reliefs were plastered over with thick mud. In many places, the mud has been removed and the original colouring is showing through. 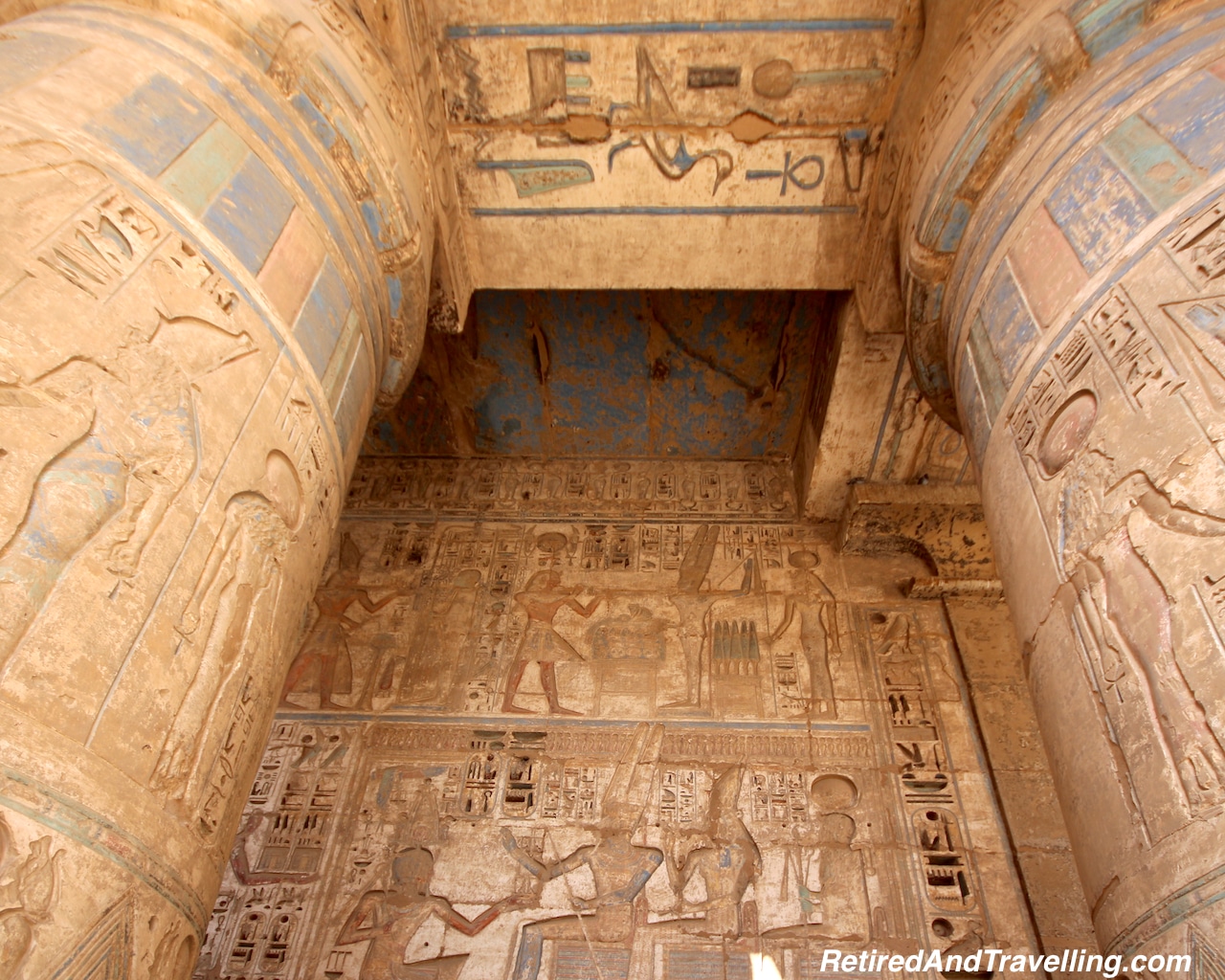 Beyond the Second Court is the roofless Hypostyle Hall. All that remain are the 24 hieroglyphic-carved bases. To the right of the hall are 5 chapels. 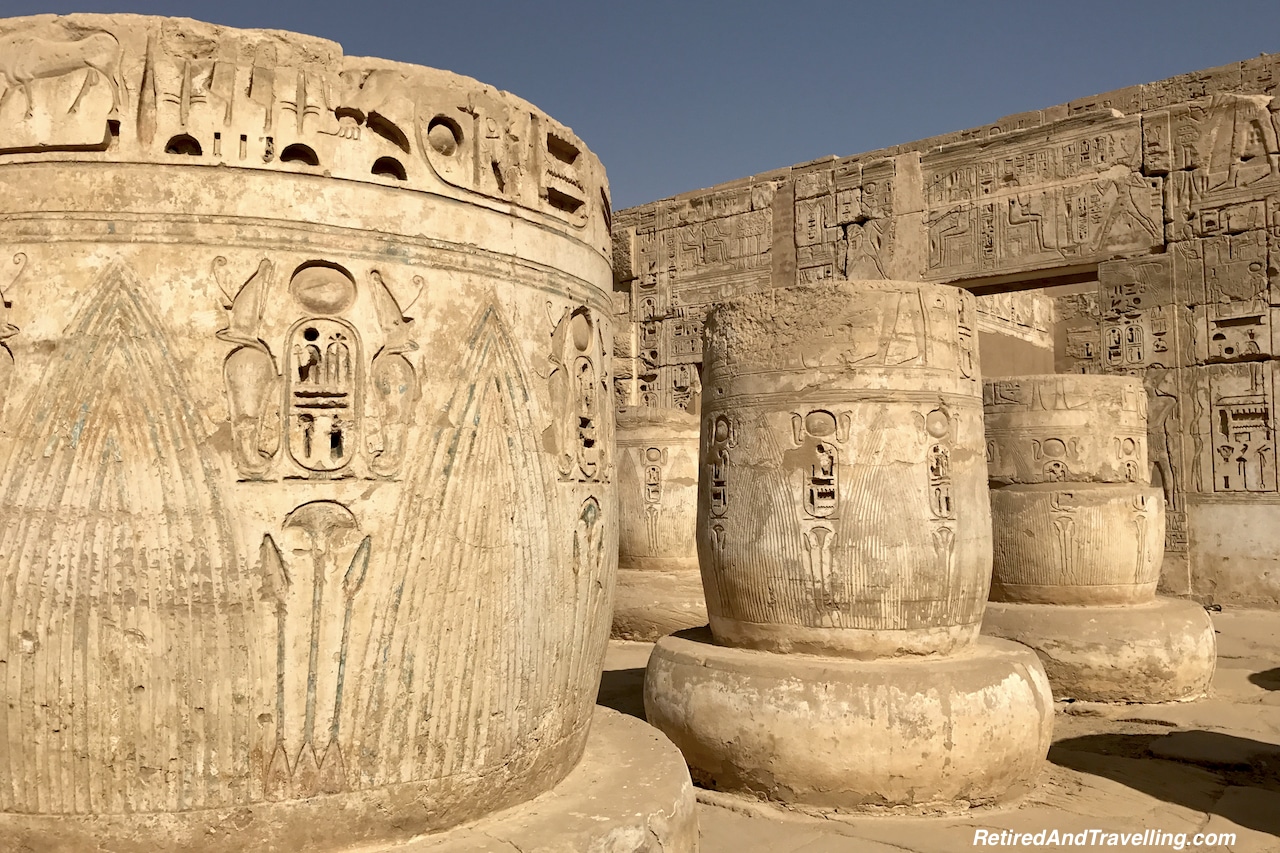 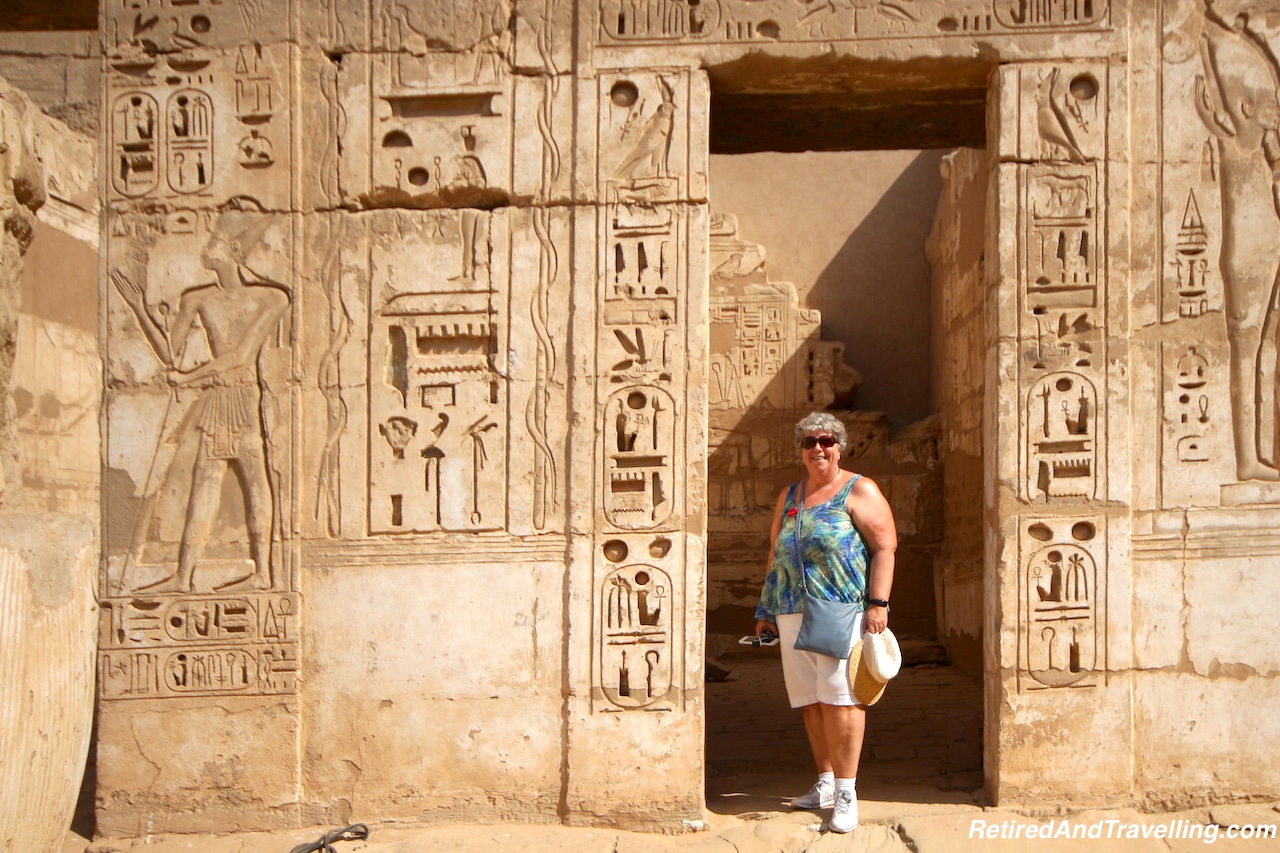 Beyond this are two smaller halls with pillars. The central aisle of the second small hall is flanked with statues of Ramses with Meat or Thoth. If you explore further in this temple, you will find 3 sanctuaries in the far back dedicated to Mud, Anum and Khonsu. 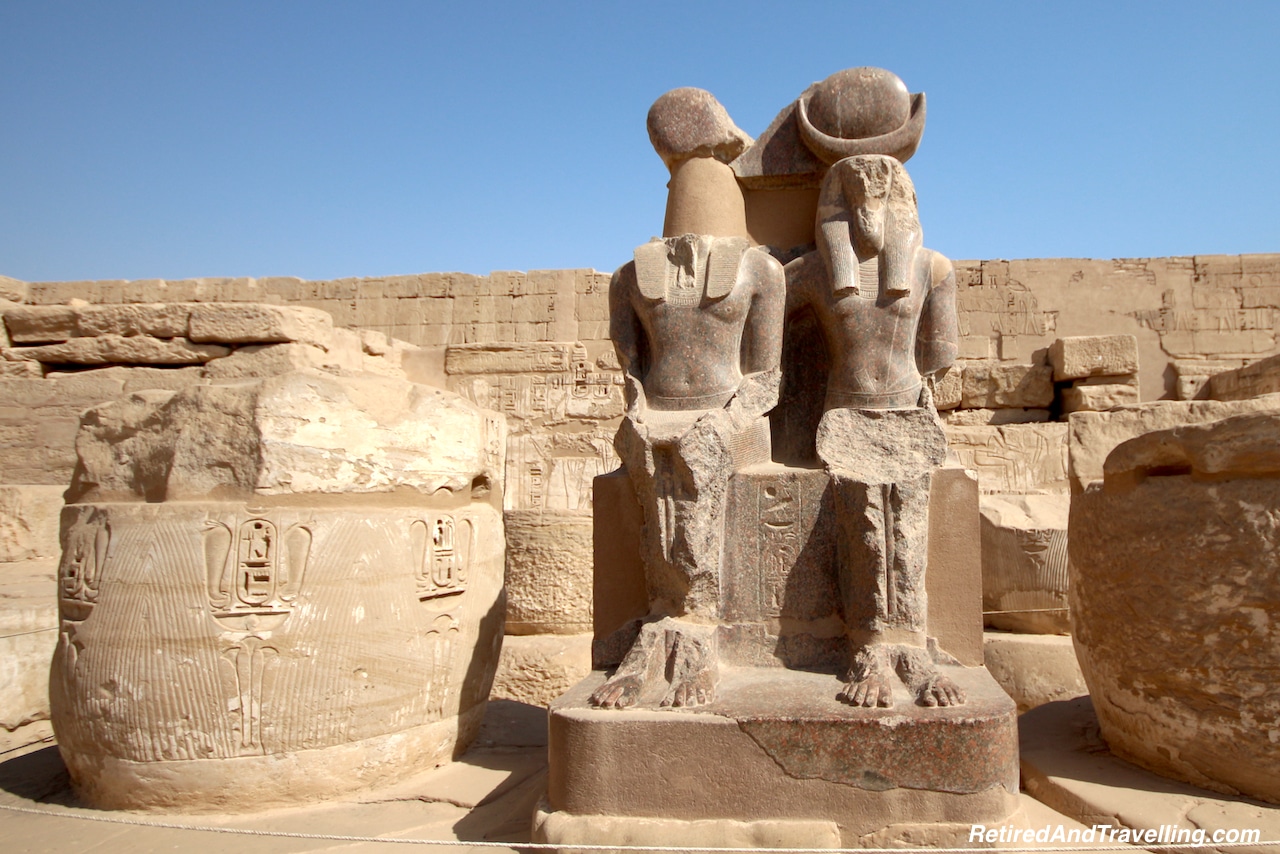 Medinet Habu was one of the most impressive mortuary temples to visit. In many ways it rivalled the detail found in the temples of the east bank – Karnak and Luxor.

We only had a photo stop at the Hatshepsut Temple. The tomb has a unique design. It looks like it is carved from the mountain. There are a series of grand terraces extending upwards with rows of square granite columns. 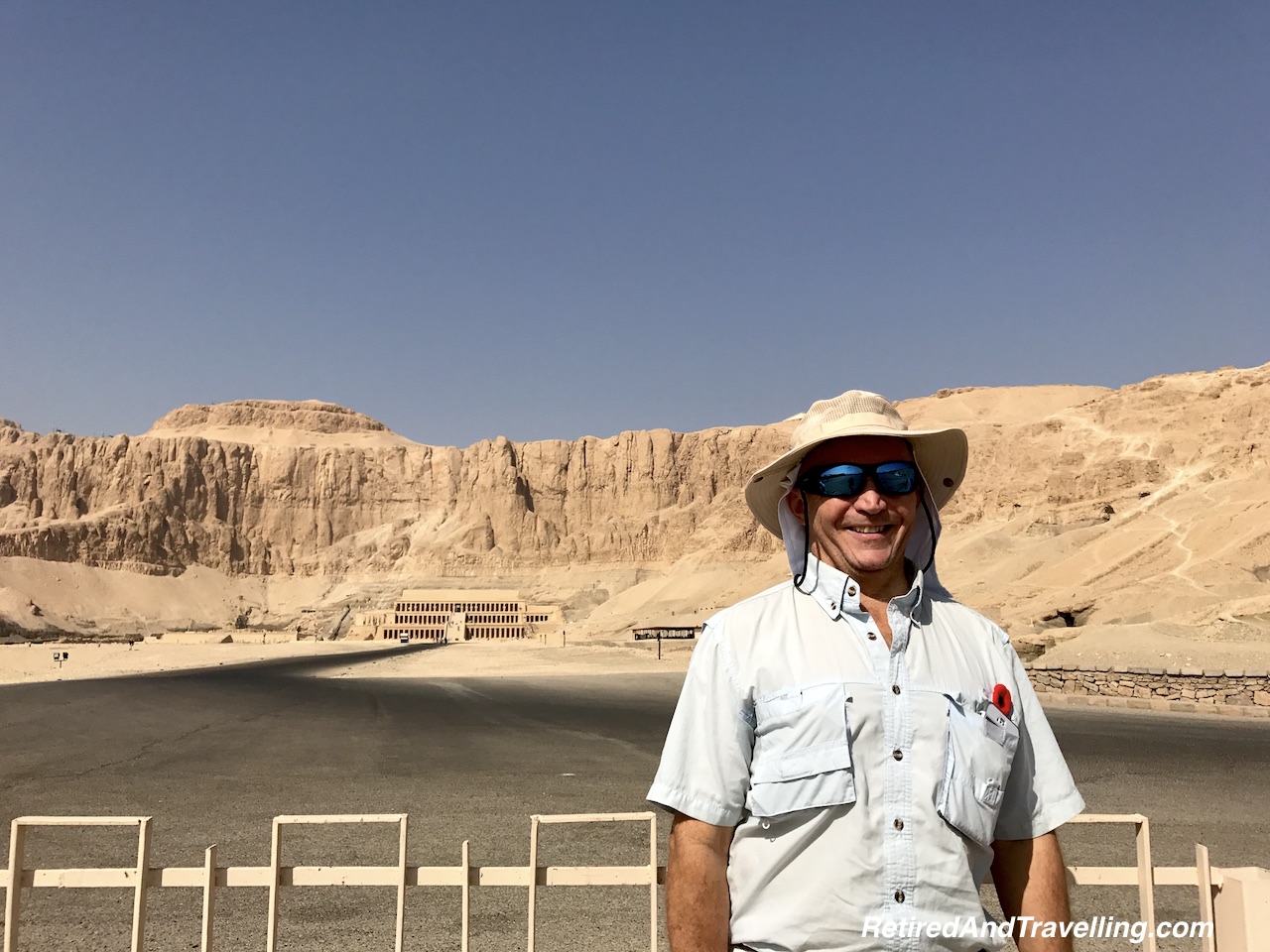 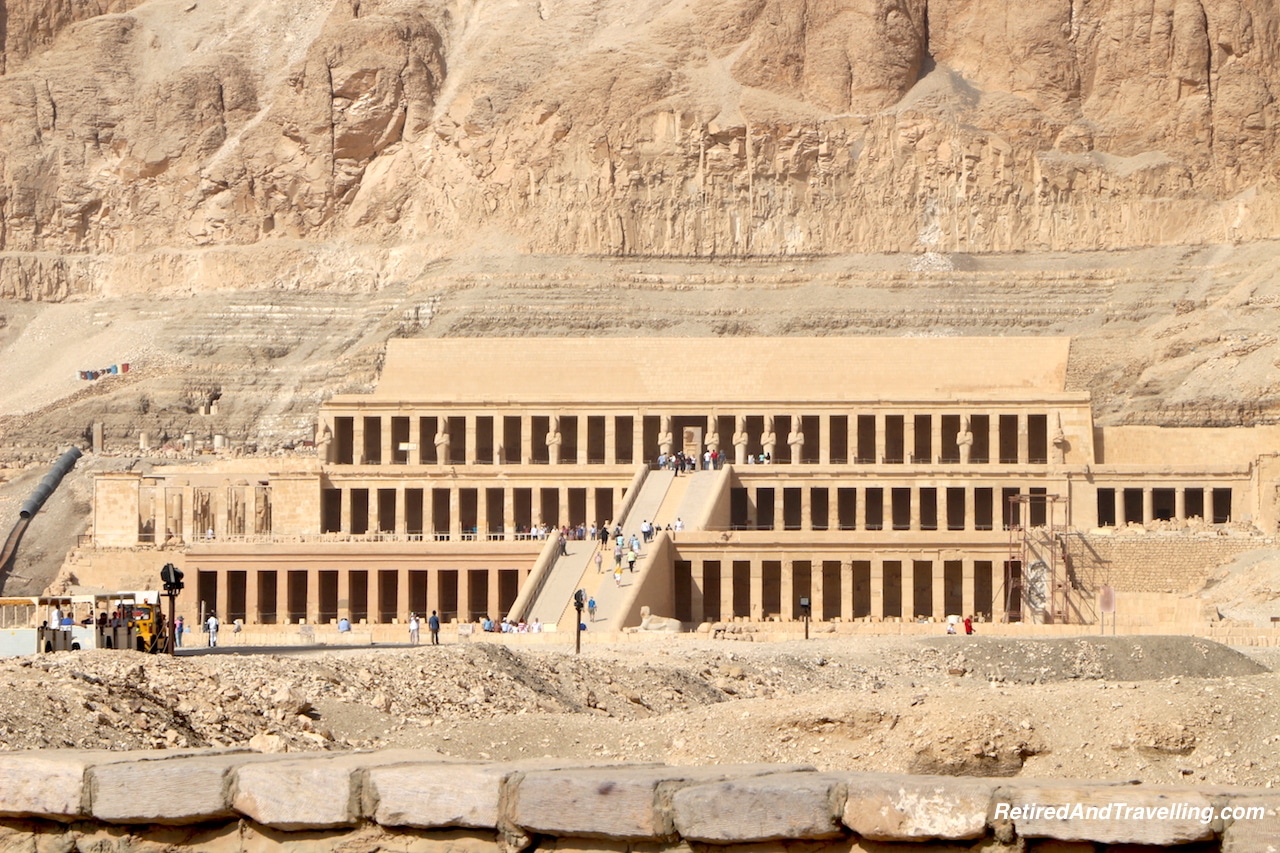 You could walk around the site and see remnants of the broader site that once still at this place. 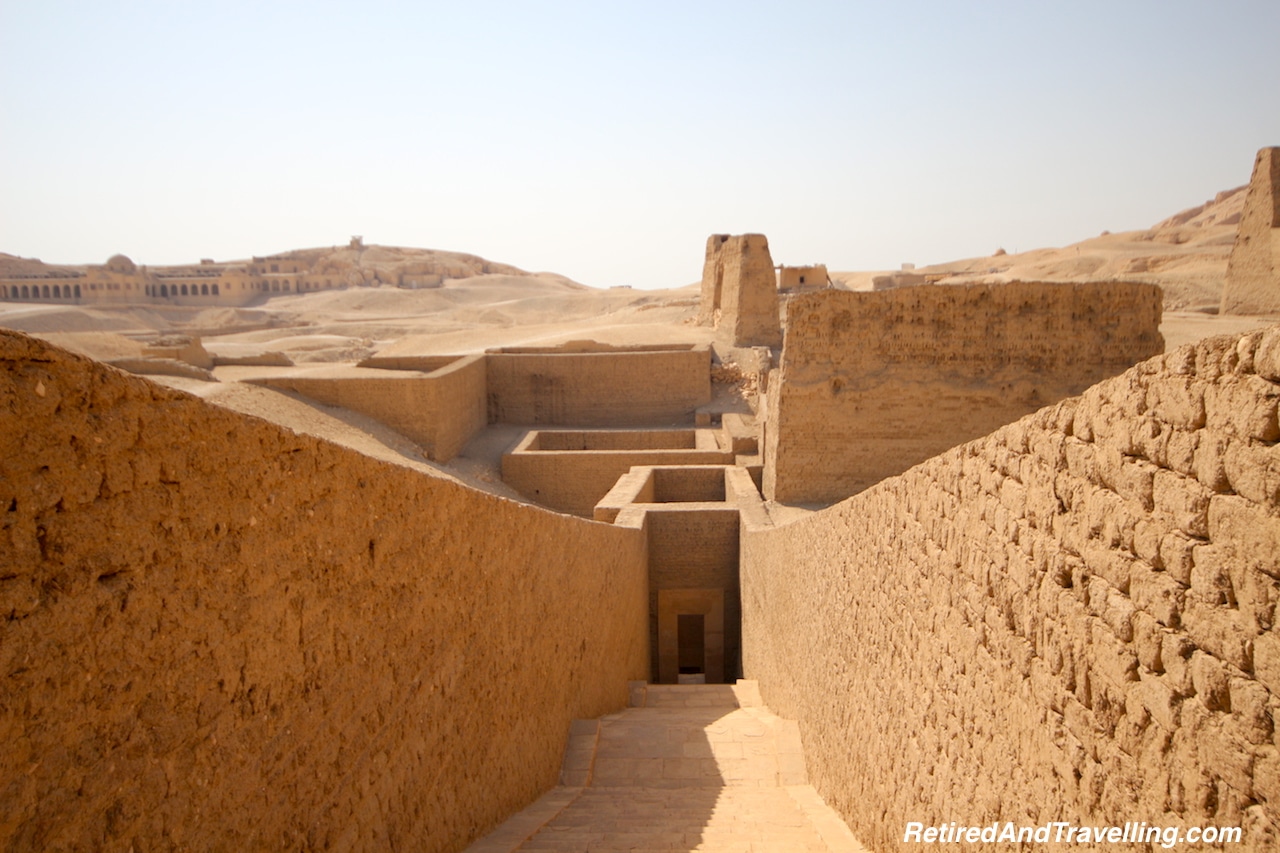 There was good police presence to ensure that people were not vandalizing the site. 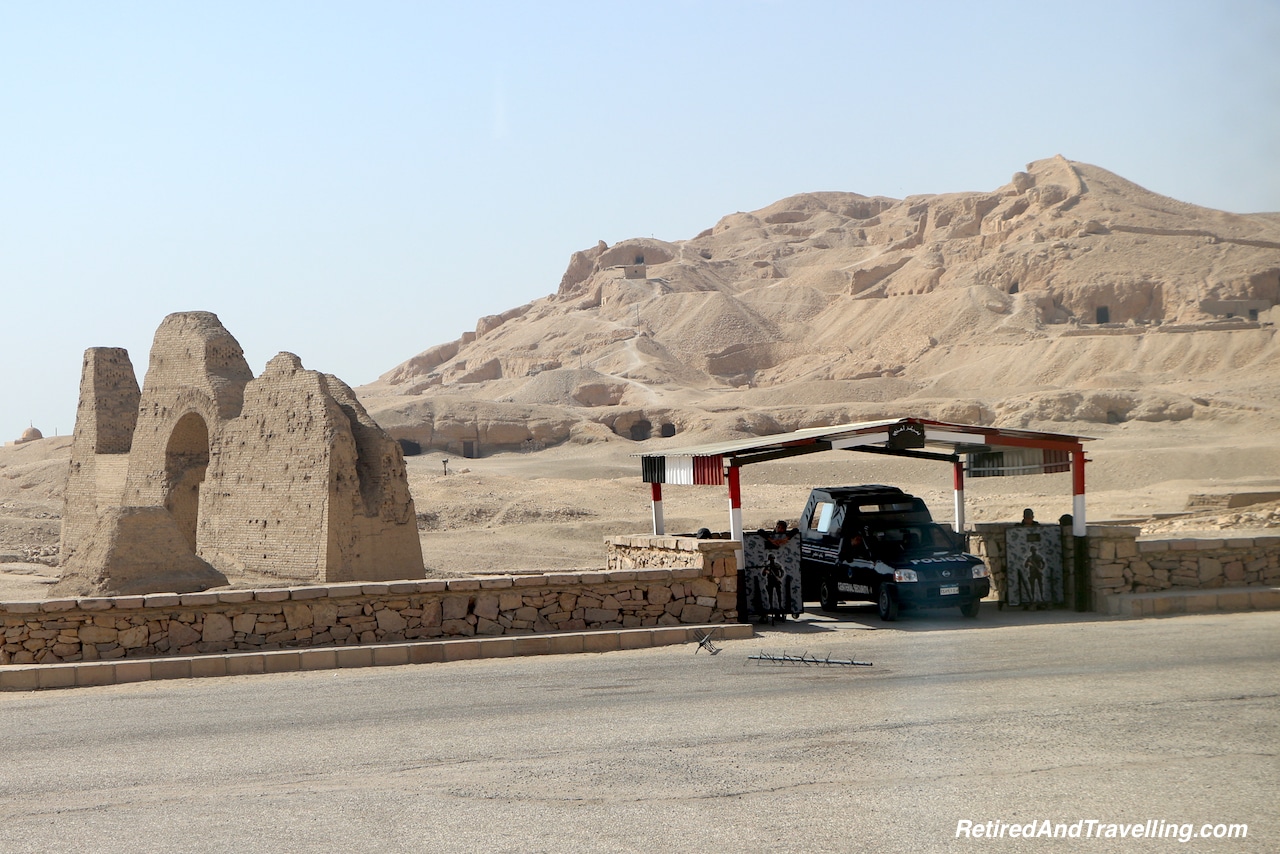 It would have been interesting to actually visit this site and see how the main building actually extends into the mountain side.

We had one more of the mortuary temples to visit on this trip. The Colossus of Memnon structure was originally built as a mortuary temple and guarded by gigantic status on the outer gate. All that remains today are the 75’ high, 1,000 ton statues of Amenhotop III. 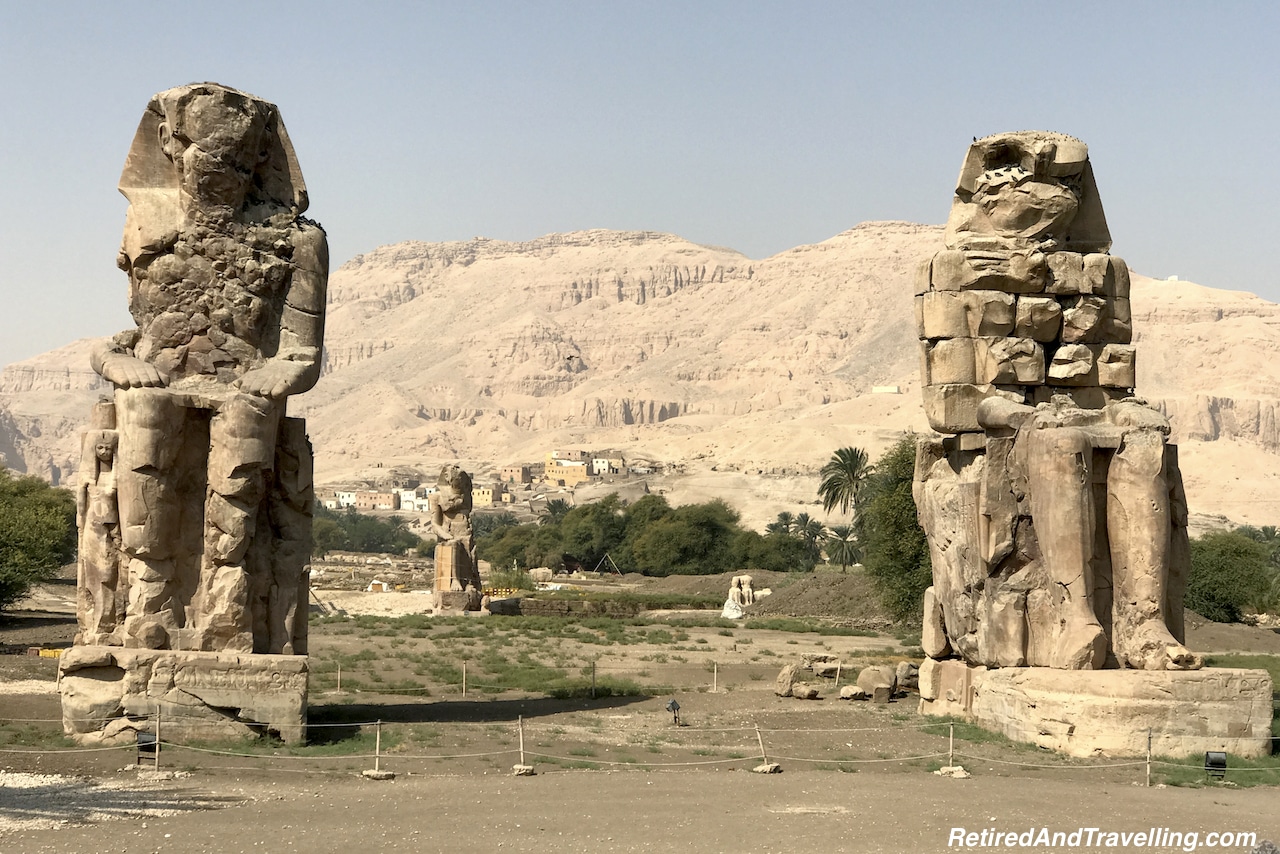 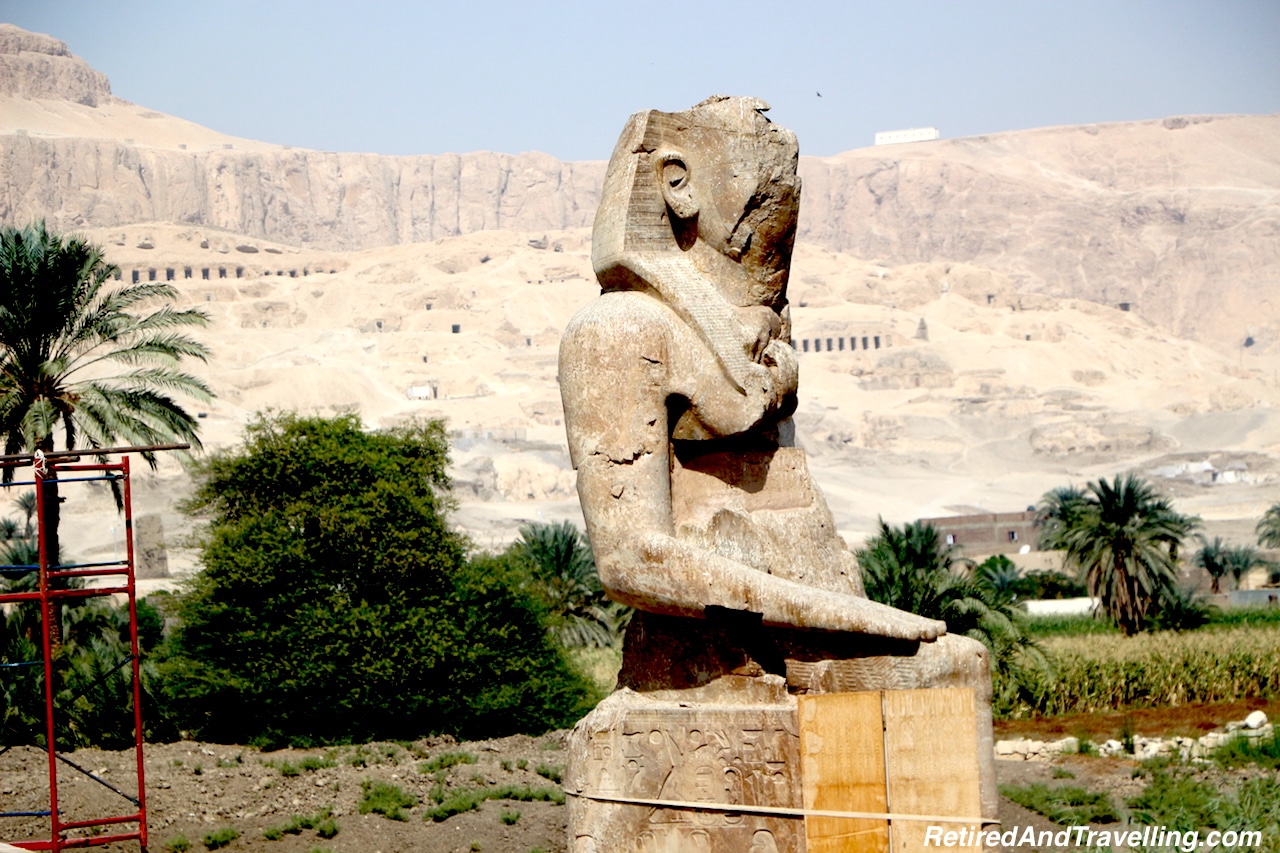 The statues have been damaged by nature and vandalism over the years. They are still quite impressive to see.

Much To See On the West Bank of the Nile

Having visited the Karnak and Luxor Temples on the east bank, it was interesting to see the mortuary temples on the west bank. We only visited a small number of the sites. It is certainly worth spending more time on the west bank after visiting the tombs in the Valley of the Kings.

Have you toured the mortuary temples on the west bank? Is there one we missed that we should have added to our itinerary?