Leaving Italy For The Day To Visit San Marino

The other “must do” day trip while at our Igea Marina stop was to visit the Independent Republic of San Marino buried in the heart of the Emilia Romagna region. The fact that it was a separate country was a draw.  But at the centre of San Marino was an ancient town high up on a hill that should not be missed.

Take The Bus From Rimini To San Marino

We took the local bus from Igea Marina into Rimini. It was an easy trip, marred only by the covetous gypsy who seemed intent on mauling my personal space. When it was obvious that I was not leaving my purse or valuables within her easy reach, she finally backed off and moved to another target. We found these same evaluative looks in the crowd when we alighted at the train station. We were on high alert. I had my purse stolen in Madrid from under our eyes by an innocent looking couple made us a pair of very suspicious travellers. We would not be taken again so easily!

We waited almost an hour to catch the bus to San Marino. So we wandered a bit away from the train station and found a cafe. The crowd had grown when we returned. We saw the good tourists lined up. But the locals and other less queue-trained tourists were prepared to swarm – with me in the middle. It was each man for himself when the bus arrived and the door opened and everyone pushed as a mob. 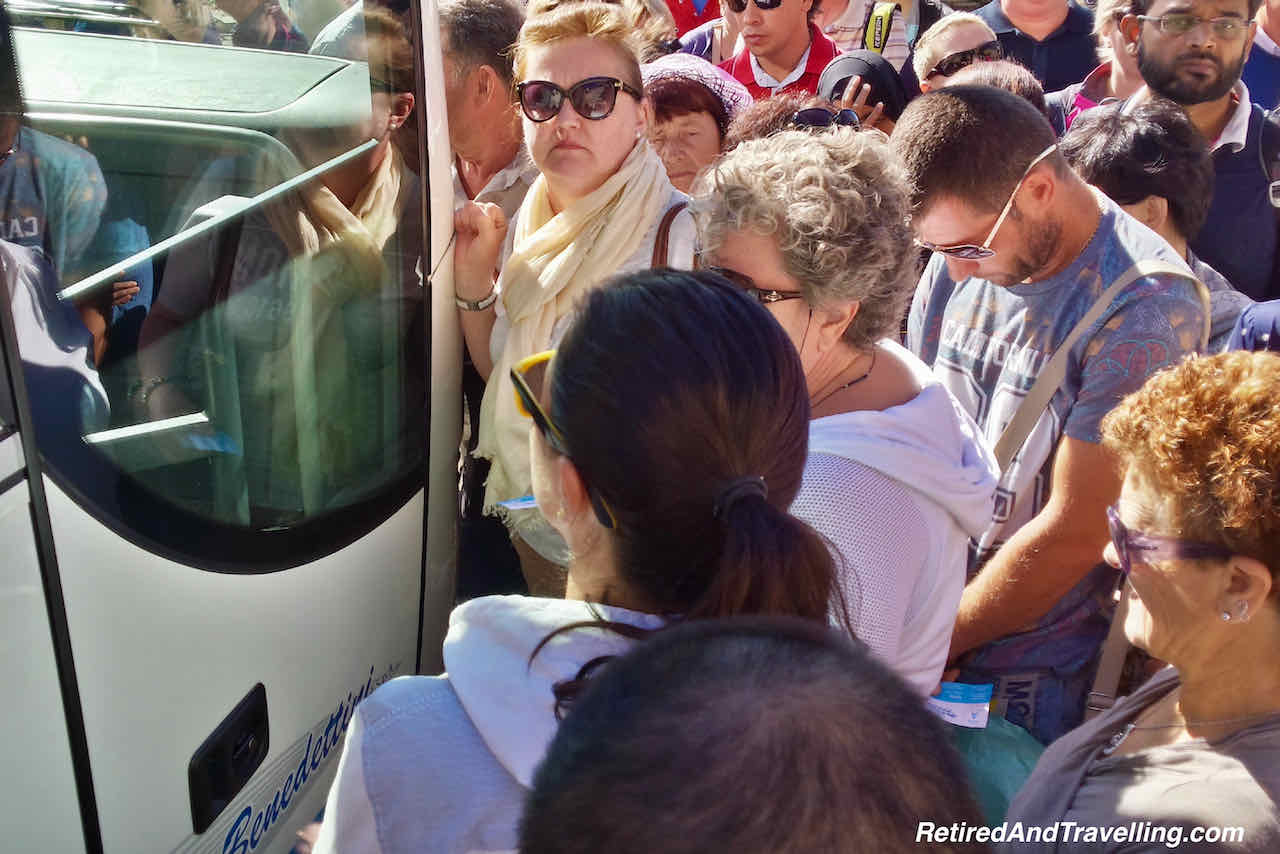 I was prepared for it and held my own.  But I saw several people’s eyes pop when the pushing started. Luckily for the polite people at the back, a second bus pulled up to help take all the crowd. I could not imagine how bad this scene was during the summer busy season!

San Marino On The Hill

We still managed to get a seat on the upper level. As we left Rimini, we saw San Marino as it got closer up on the hill. As the bus went up the switchback road, San Marino popped in and out of camera range. We passed the lower parking lot with the cable car to the top.  And stopped in the last parking lot beside the little train tour. David scoffed at taking that easy way up! 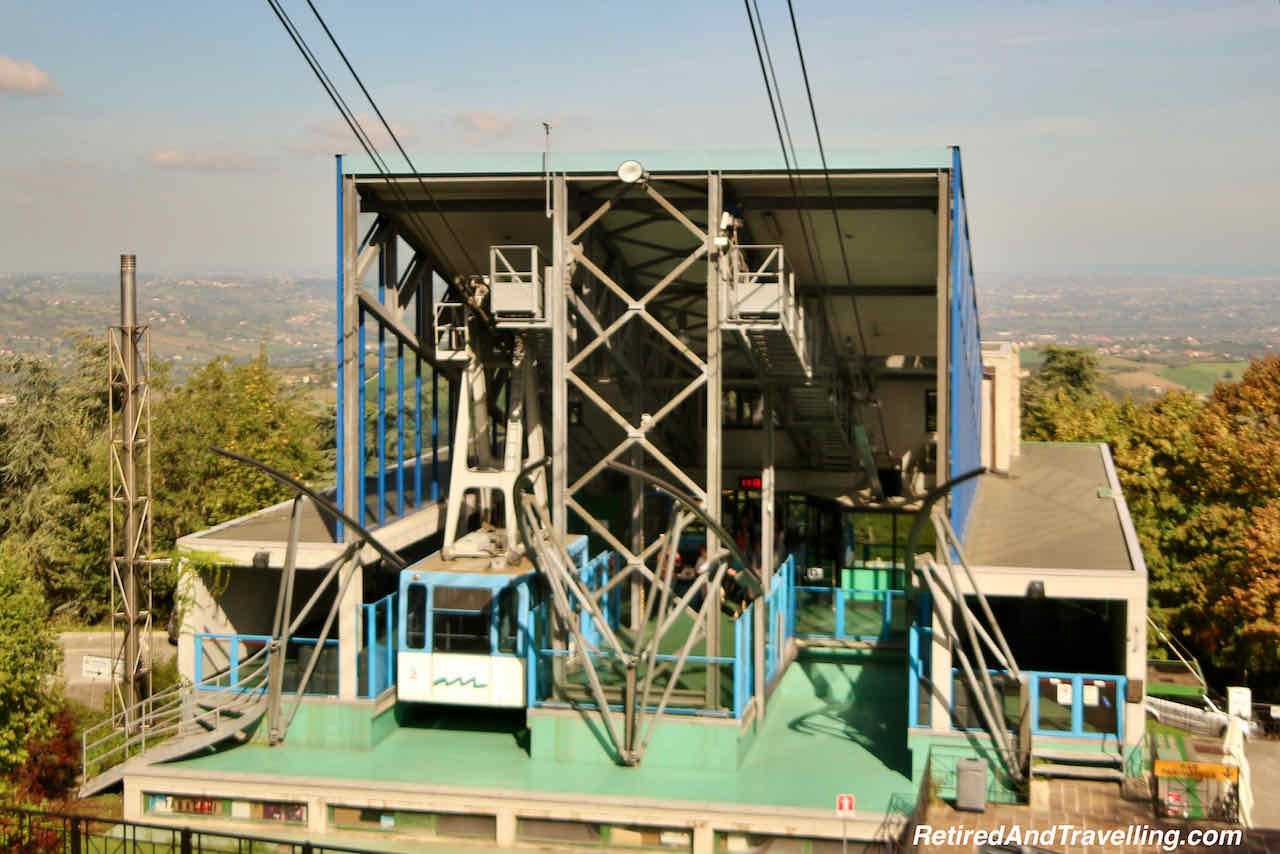 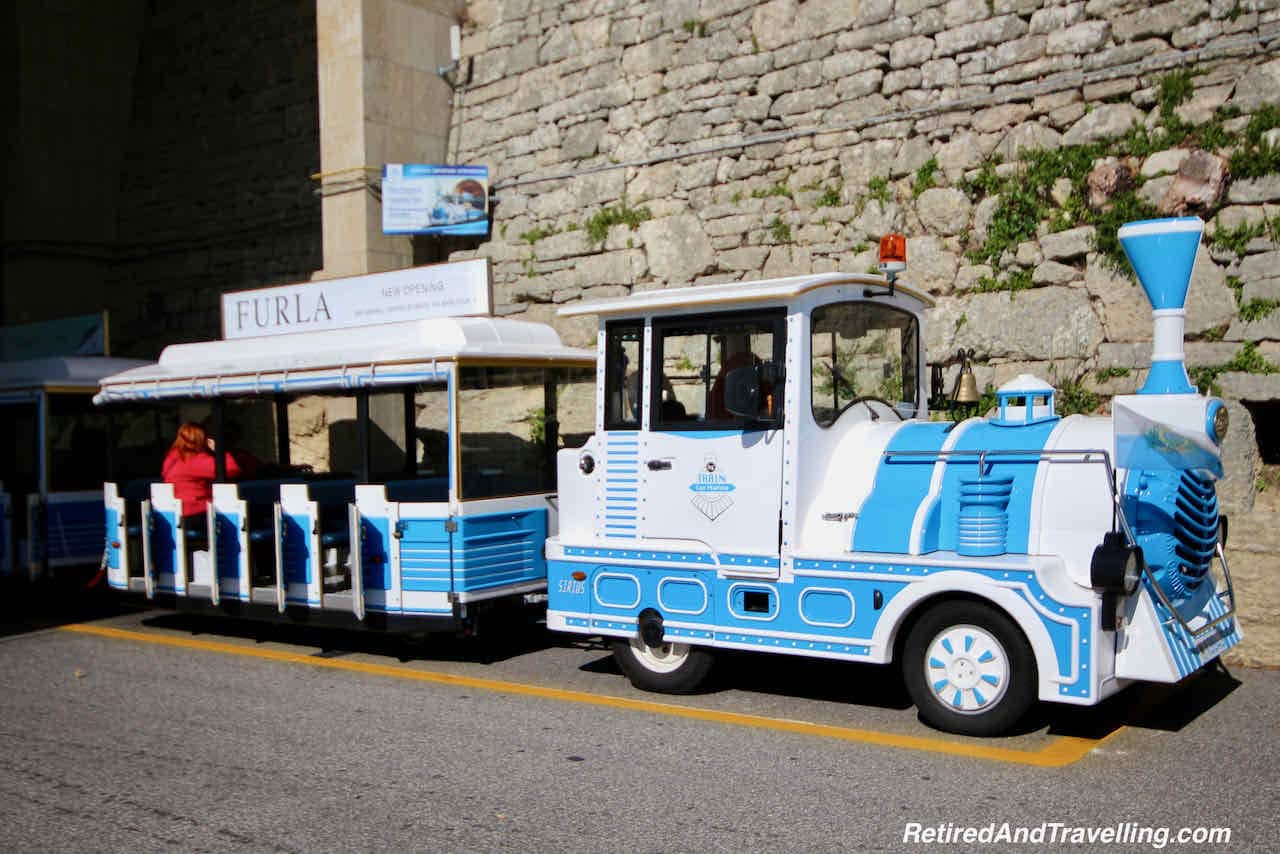 On the lower levels as we walked into the old town, we found an interesting display of statues. While the screaming commemorative statue was disturbing, the other statues offered more classic female images. It was a kinda odd entryway to the old town. 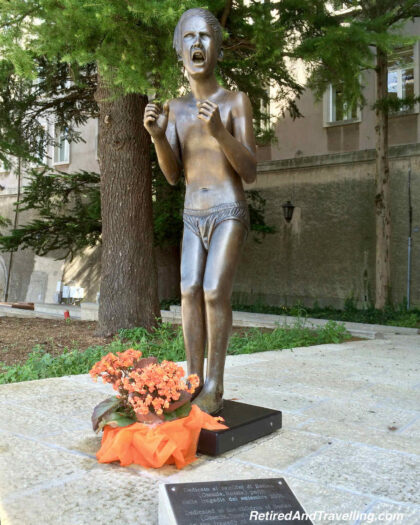 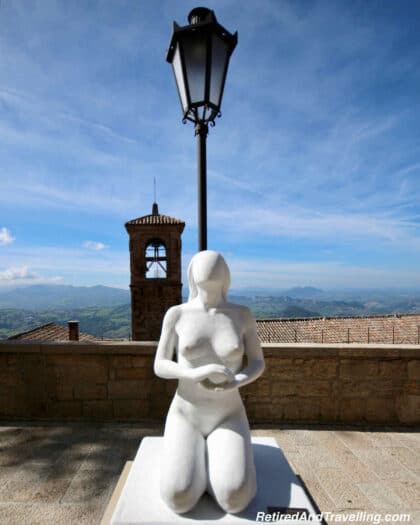 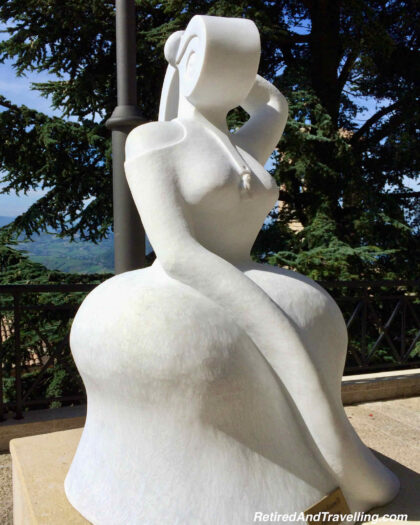 Billy goat Linda ploughed her way from level to level further up the mountain. Every now and then we found a great vantage spot and took pictures of the surrounding countryside. On one side we saw hills leading to higher mountains in the distance. In the other direction we looked out over the newer town of San Marino and out towards the water and the town of Rimini. 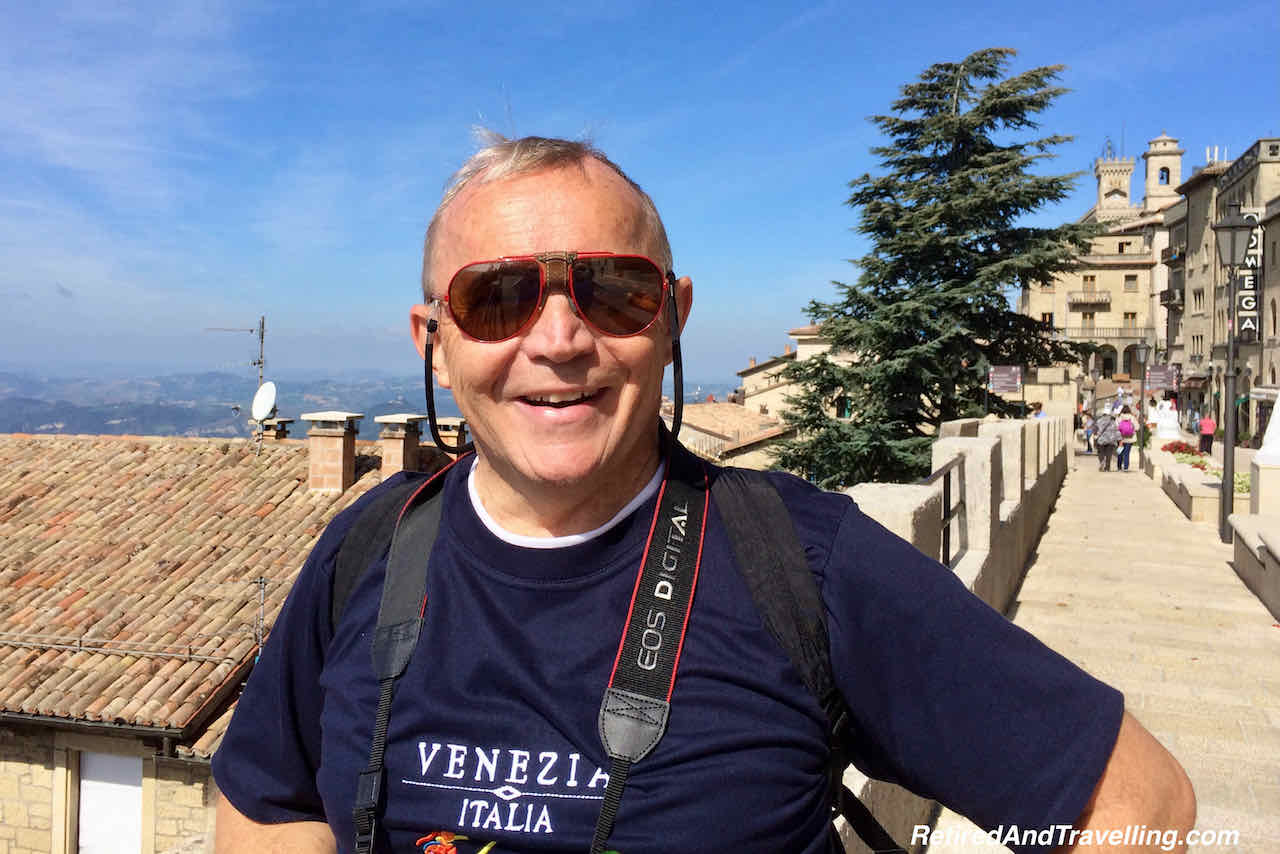 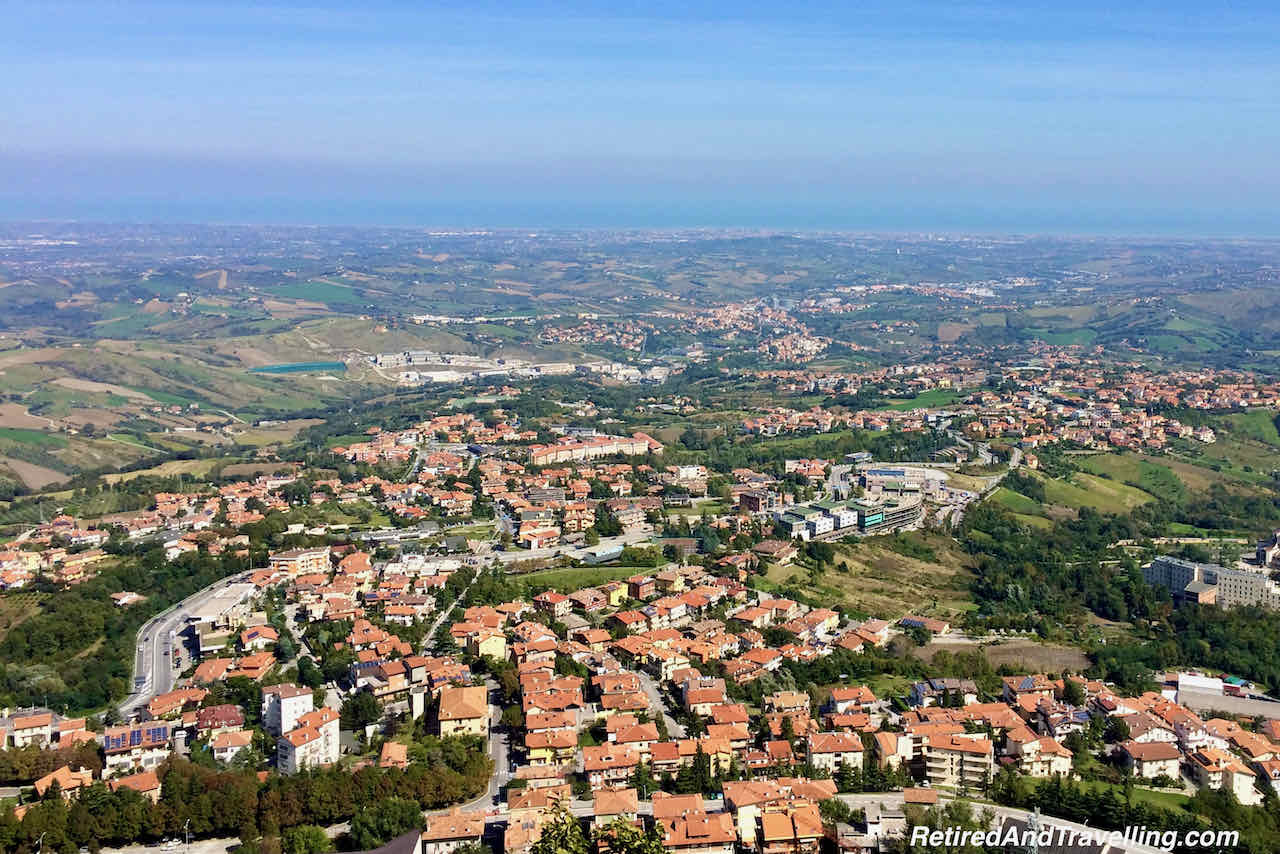 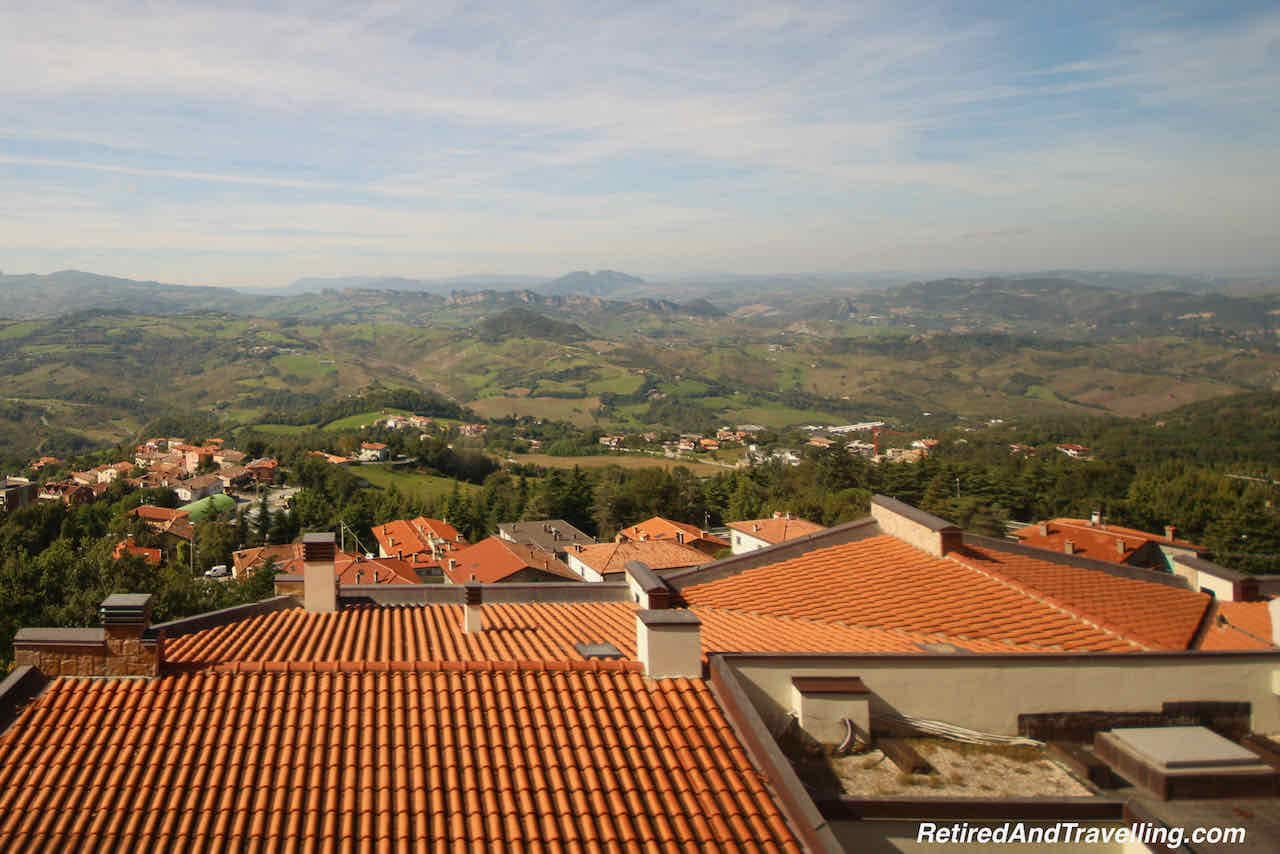 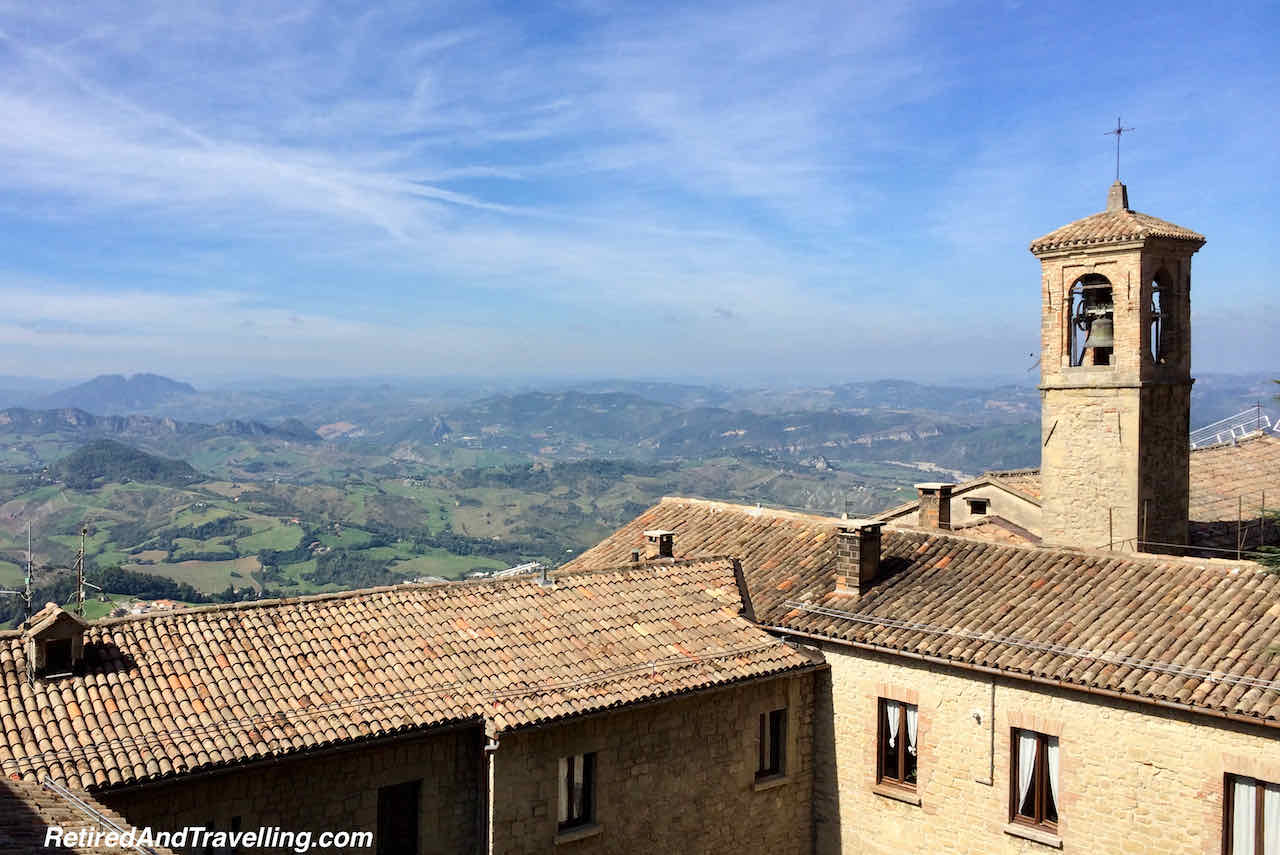 Stops On The Walk Up

Like any good Italian town, there were opportunities all along the way to stop at several churches and interesting buildings. We managed to miss the “changing of the guard” ceremonies.  But kept running into an official tour of the town being conducted by some town official. 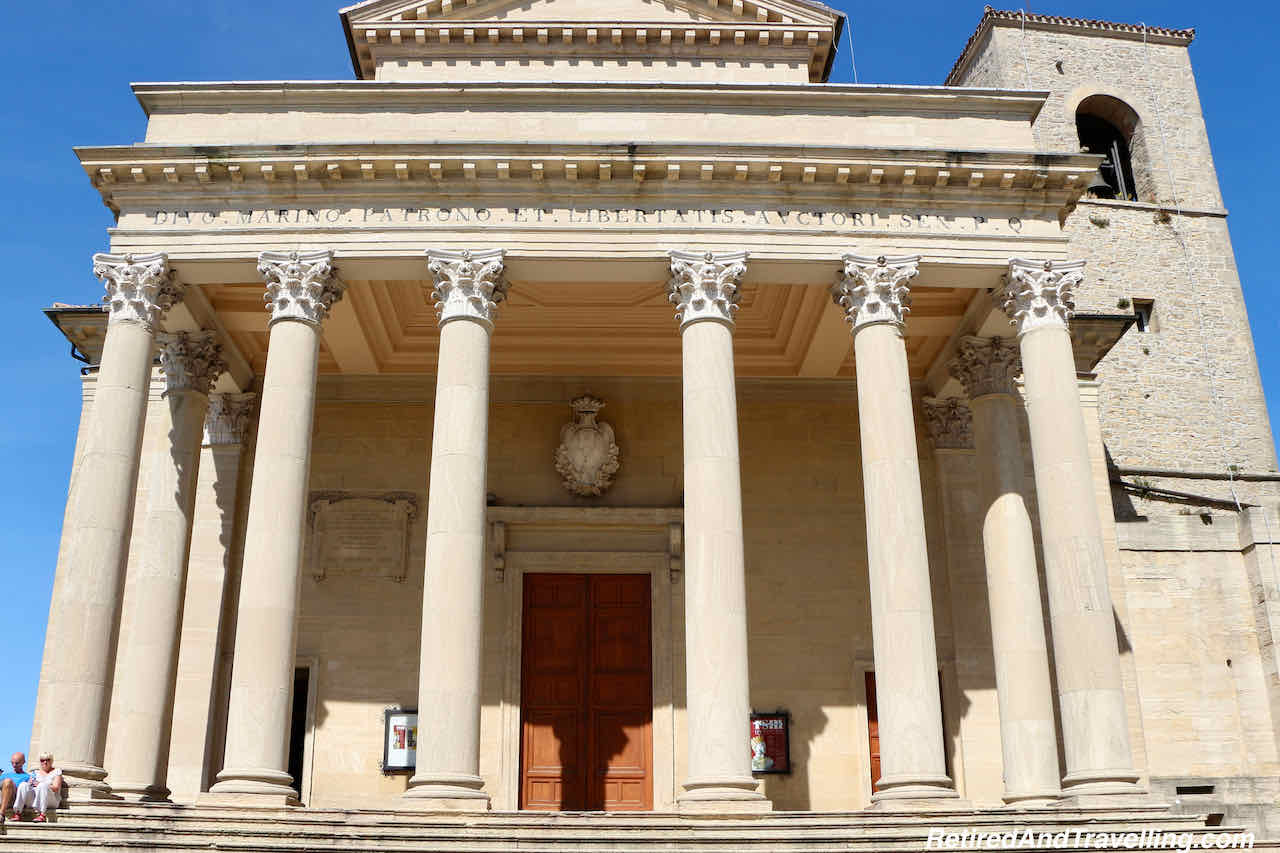 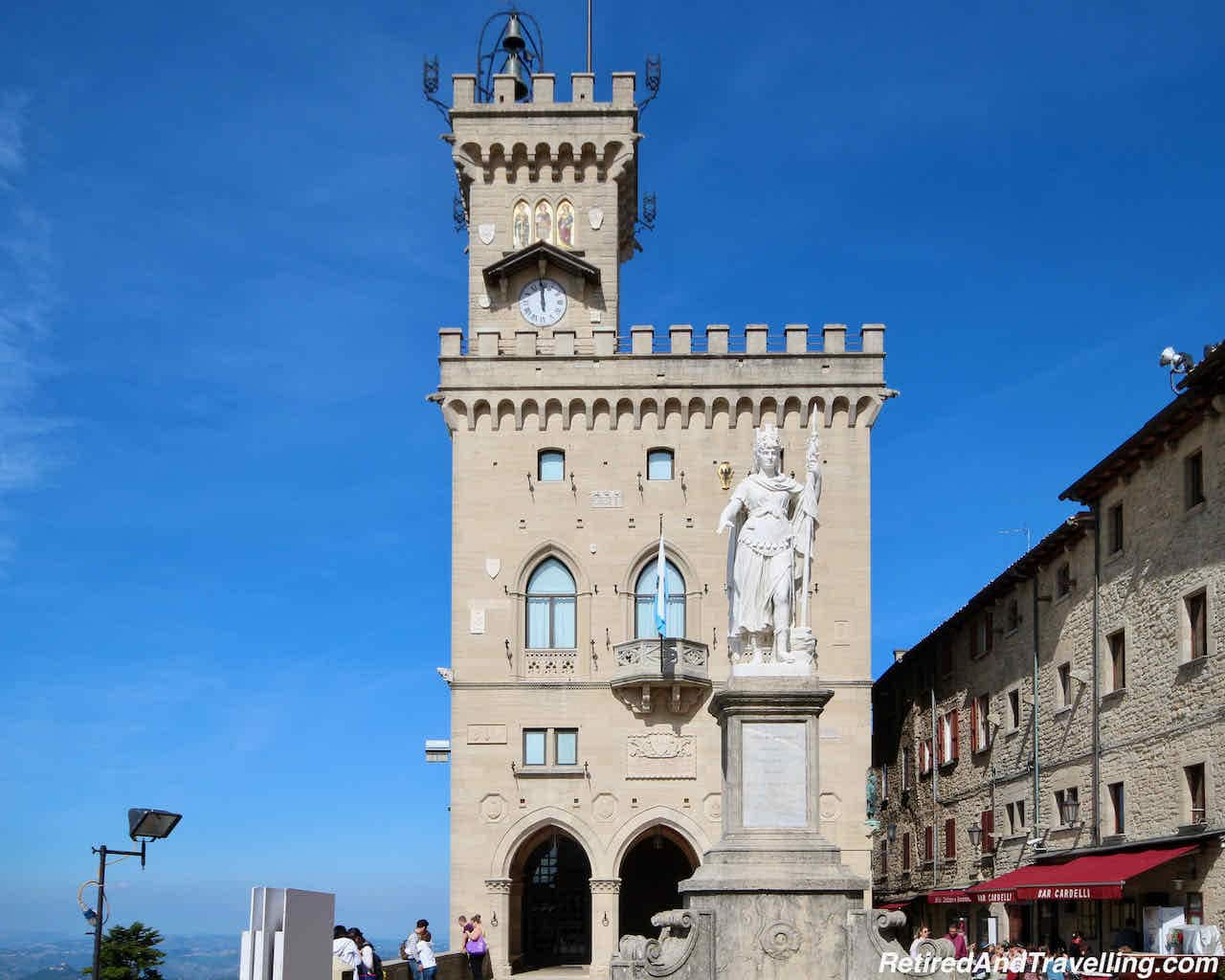 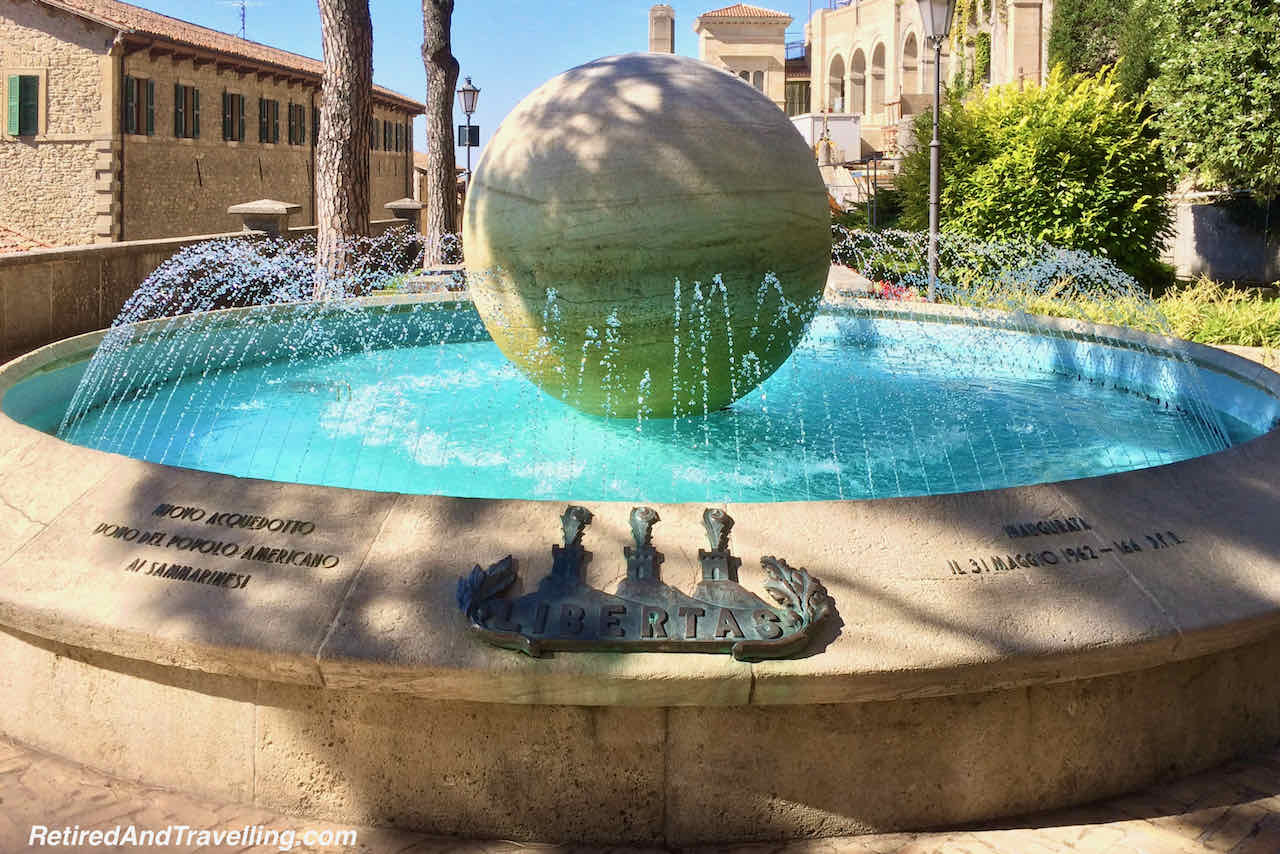 We found a good spot for lunch.  But wished that we had waited until hitting the summit for the better view. 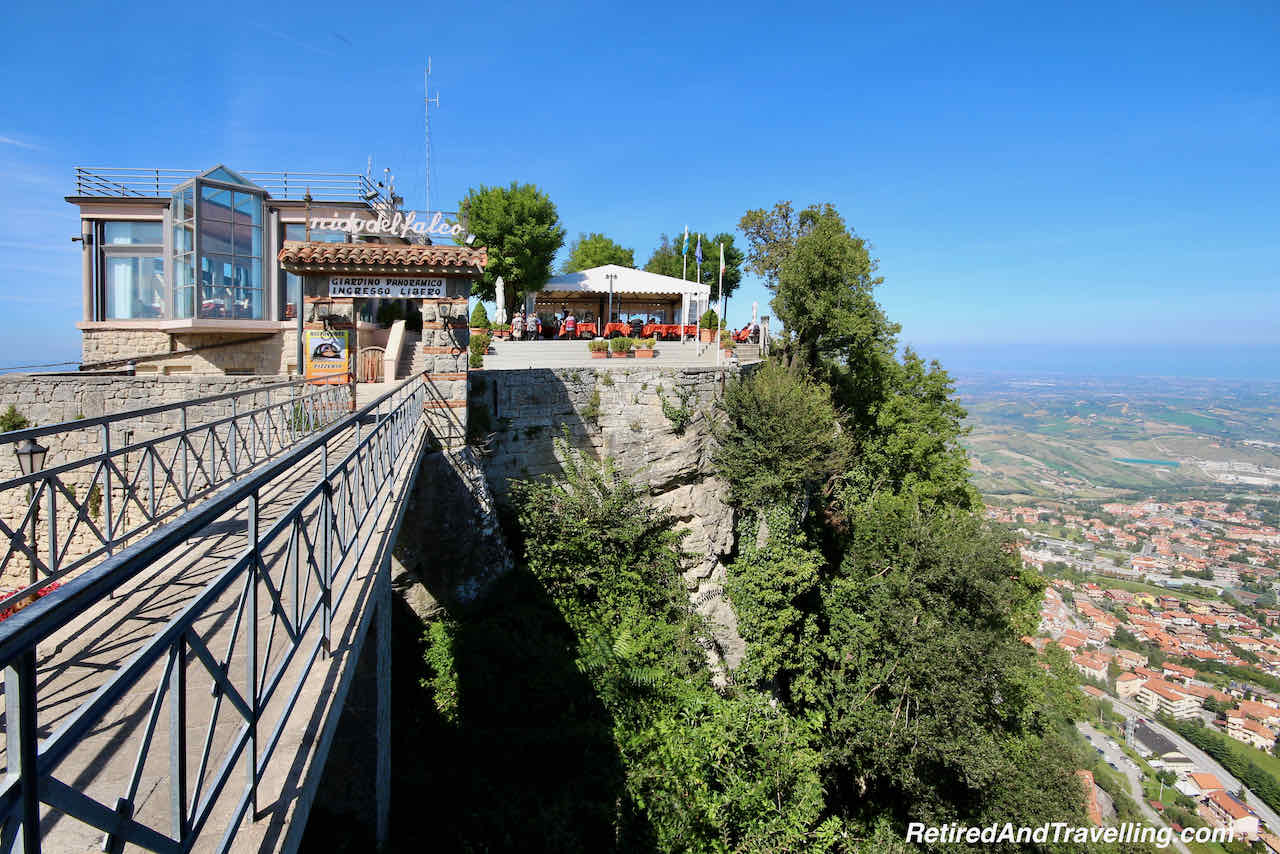 San Marino was guarded by a set of three towers. The first tower was located within the main tourist area of San Marino and was the target for our continued upwards climb. 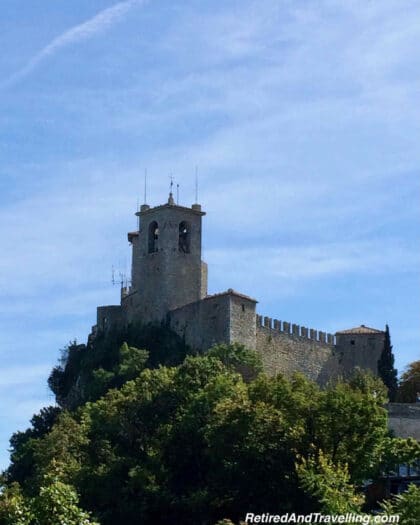 Walking At The Top

We finally reached the first tower at the top of the old city and paid our admittance fee. And up we continued to go. We could visit the various buildings that stood guard over the city.  And enjoyed the views when we walked on the walls. 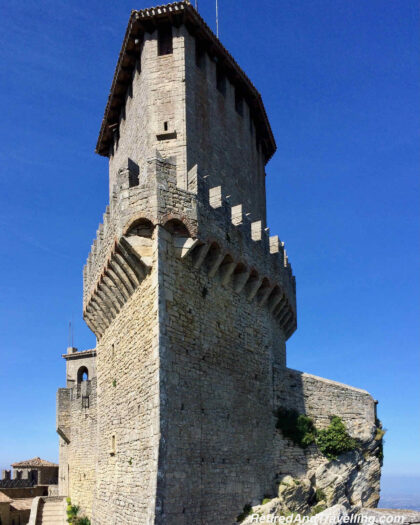 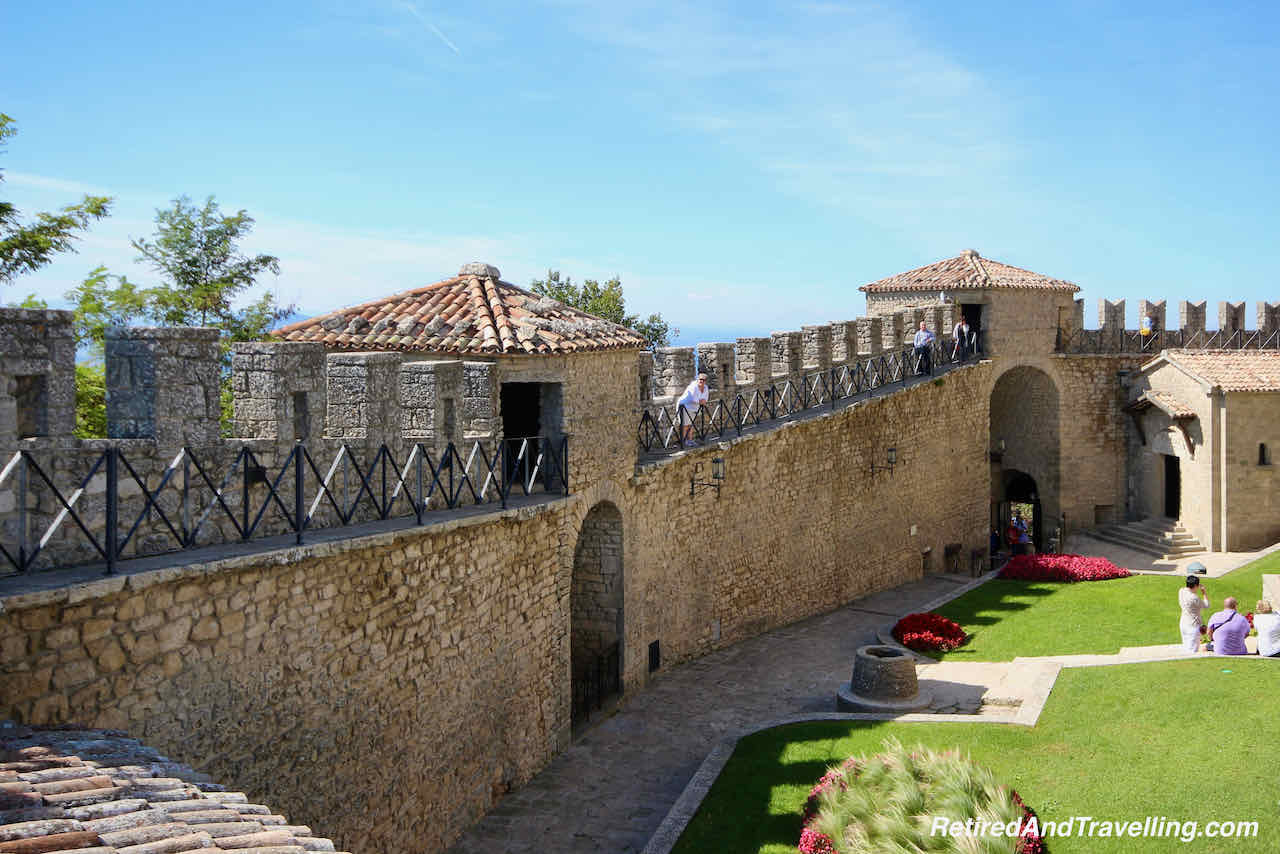 One tower was open to climb to the highest lookout point.  If you could fit through the little hatch. I sent David up the Cinderella stairs for the higher view over this first tower area.  And then positioned myself to get a picture of him waving from the top. 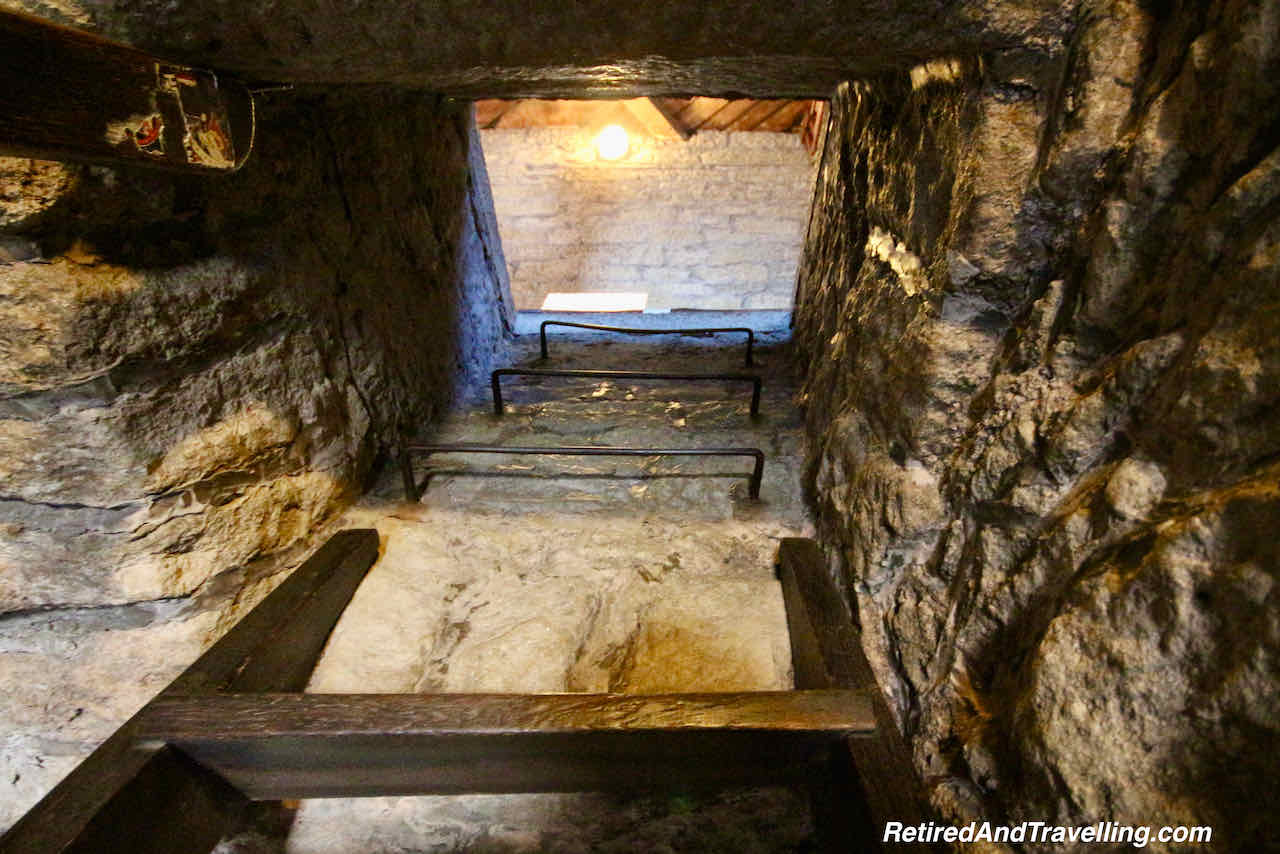 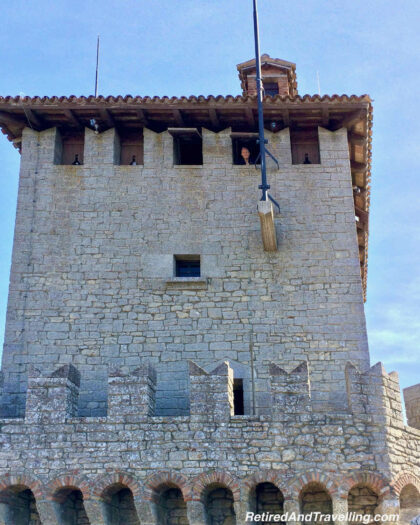 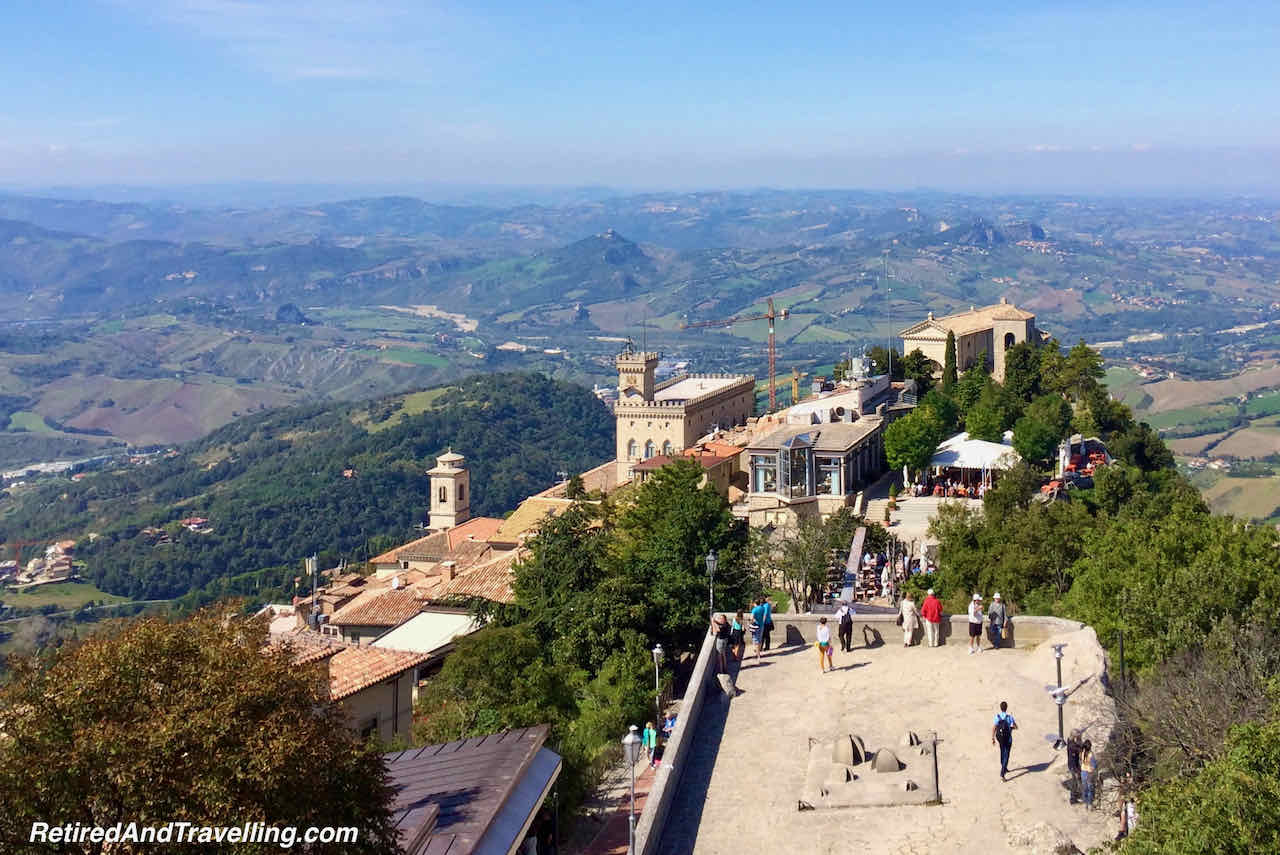 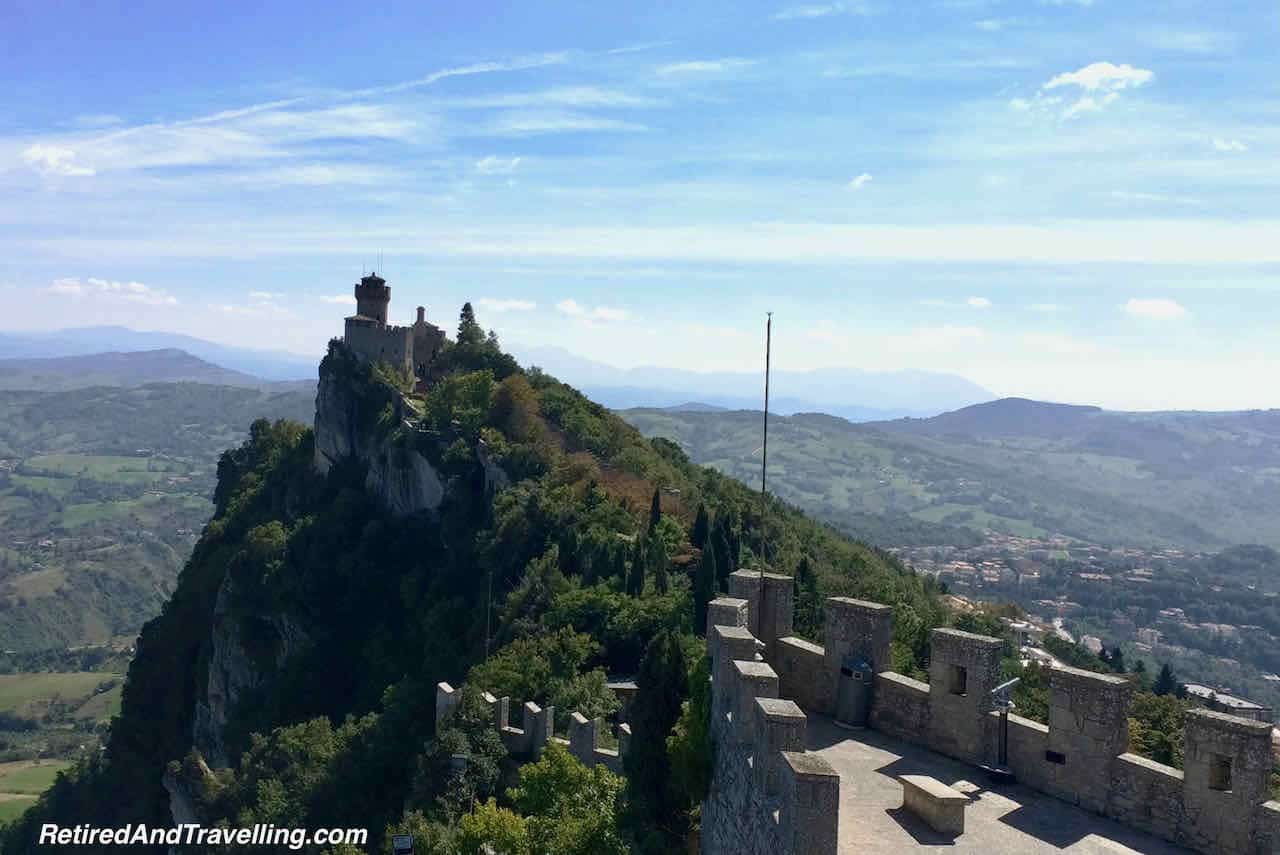 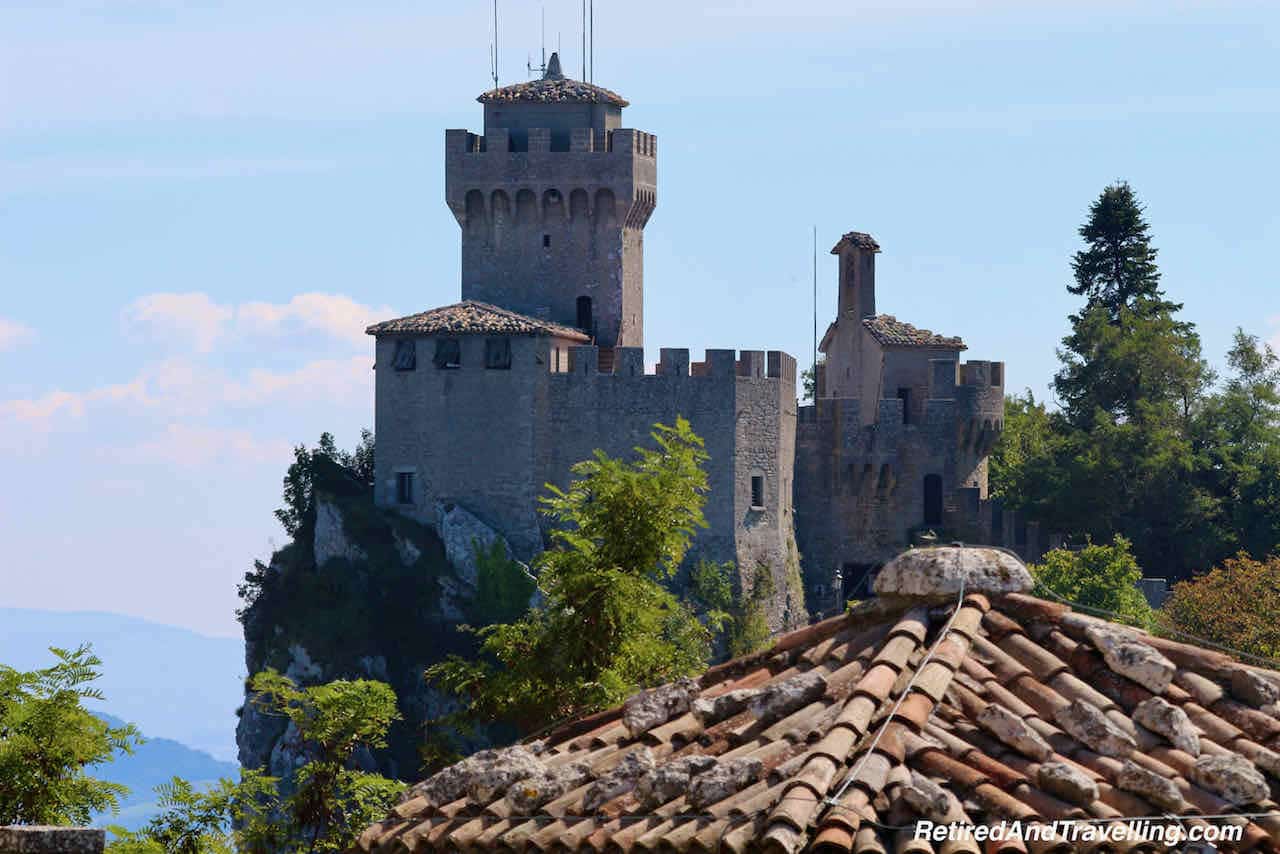 We took the less travelled back path down and finally found our way to the lower levels.  It was easy to find the bus pickup location. As we strolled, we did not shop and take advantage of tax savings.  And we did not frequent one of the many fully outfitted gun shops in the town (located next to the Christmas store). 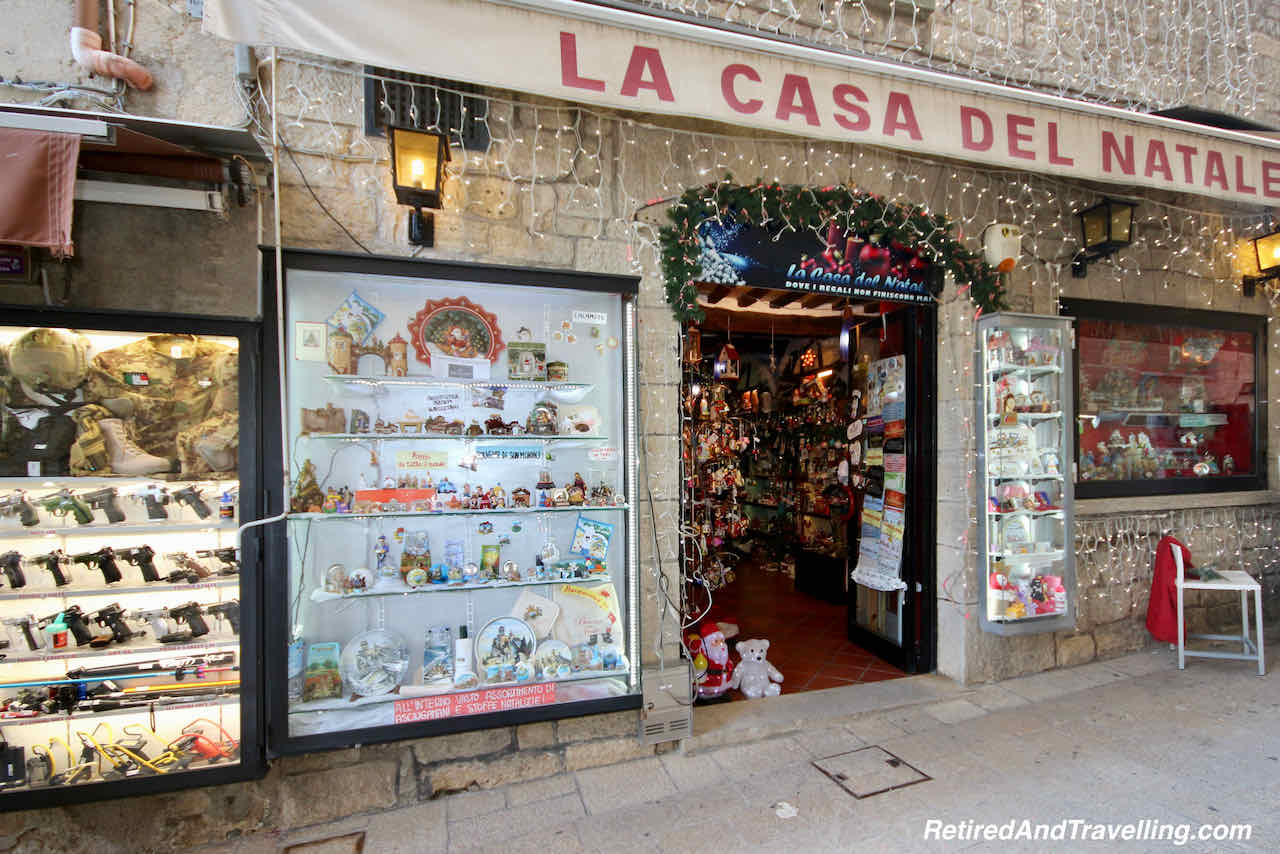 At the bus stop, the crowd was pretty calm until the bus stopped.  And then the swarm began. I was sure this just amused the bus driver who kept us crowded outside the door for 20 minutes. When the second bus arrived, half the swarm moved off.  But both bus lines were a zoo. Both buses still had empty seats when the buses pulled away with all the mauled passengers on board.

A Final View Of San Marino From Afar

After the sun set, we went to the roof of our hotel.  And far in the distance we saw San Marino twinkling in the sky.  It was another adventure on our week stay at Igea Marina! 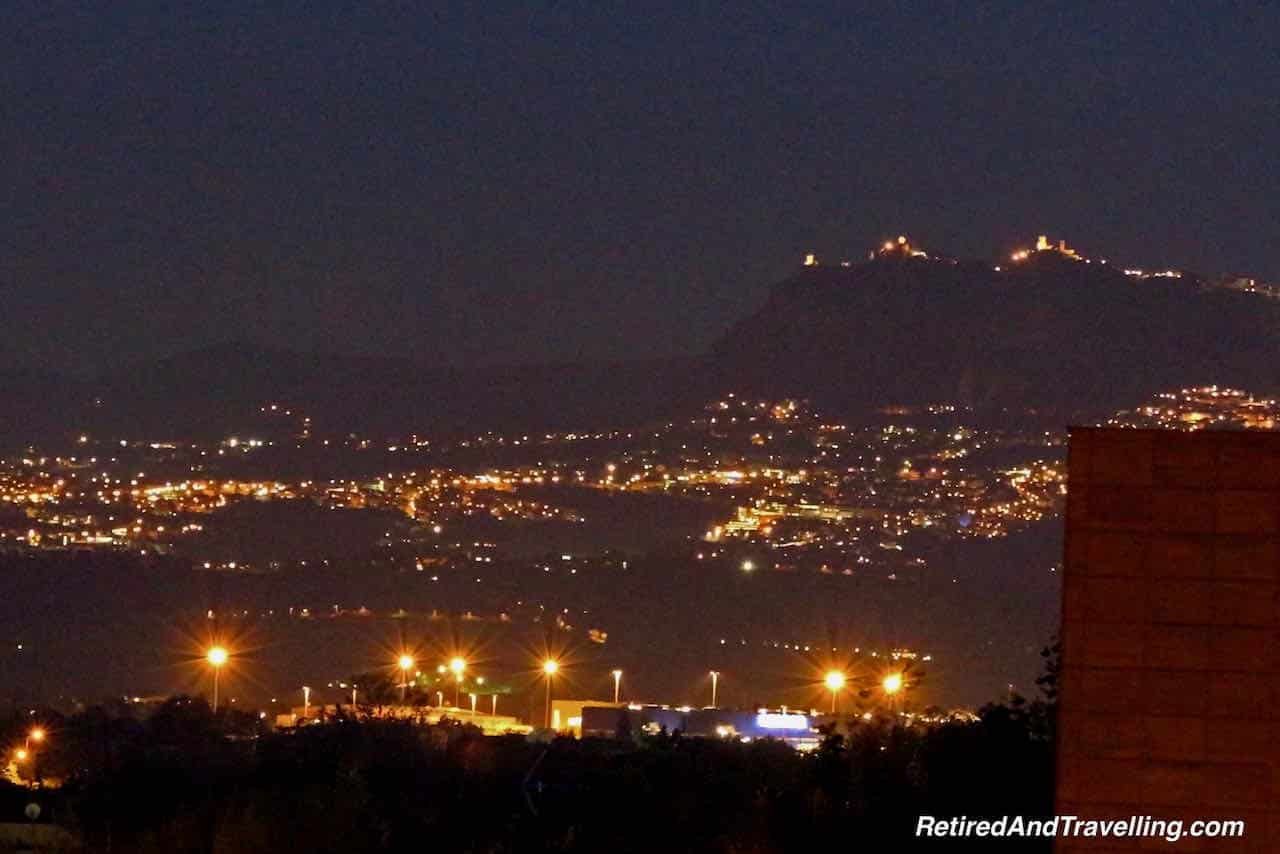 We left Italy for the day and saw the interesting independent republic of San Marino.  Did you visit San Marino when you were in this region? 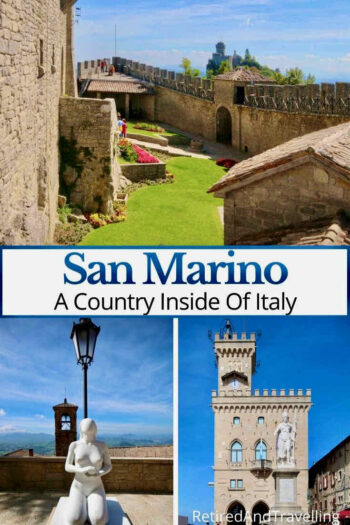 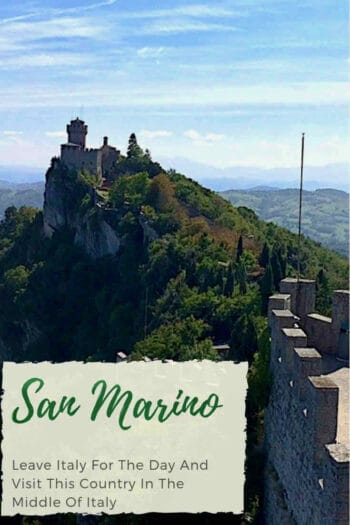 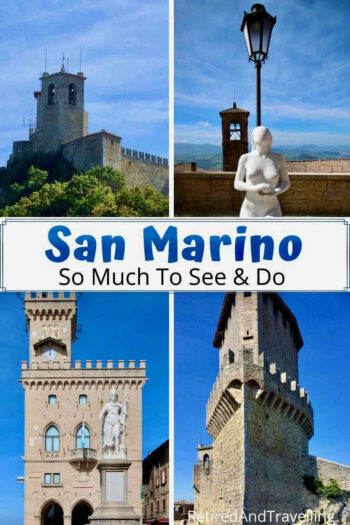