Toronto to Vancouver Road Trip Through The Midwest USA

The first leg of our travel from Toronto to Vancouver was the road trip through the Midwest USA.

We normally headed to Europe in September. But this autumn was spent in Vancouver, British Columbia. Our road trip across the country took us from Toronto to Vancouver. This was the second major road trip that year.  Our first trip took us to Nova Scotia in May. Like all of our best road trips, for the majority of the time it was just us and the open road.

It was an interesting drive across the U.S. through the mid-west, into the foothills and ending on the west coast. Travelling through the midwest, we saw the road ahead for miles, watched the fields of cows as we passed and when we hit North Dakota there were oil derricks. 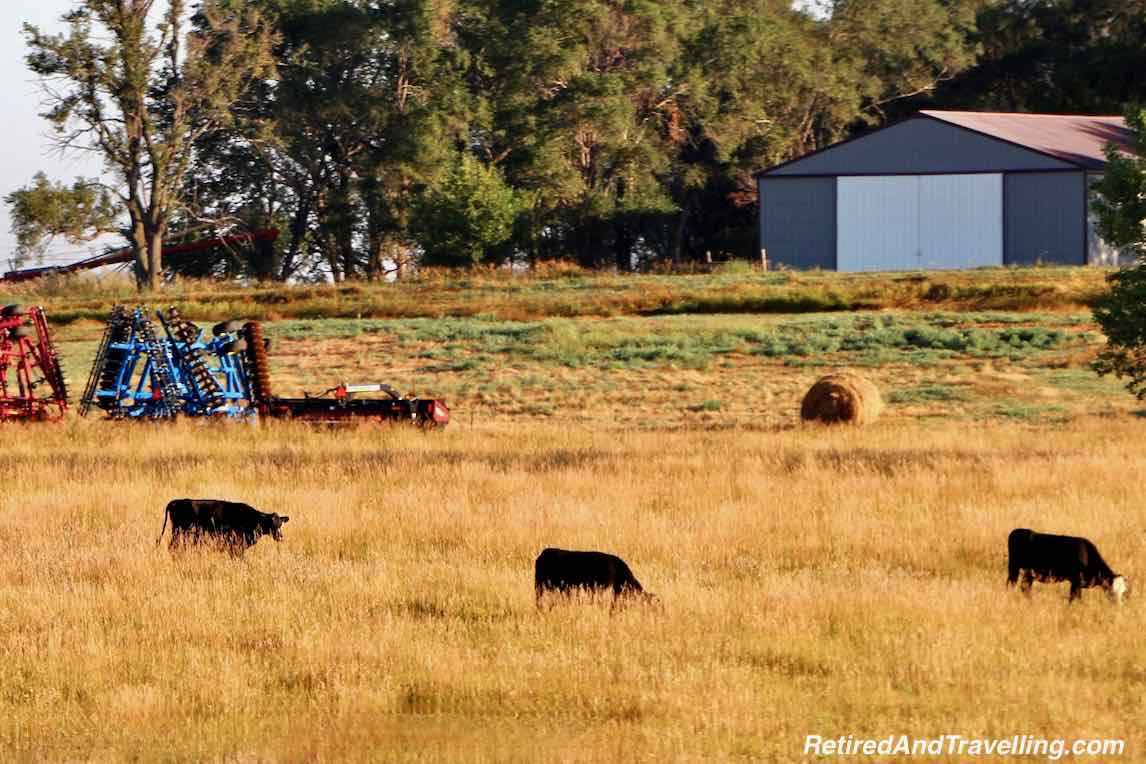 At one point we passed huge fields of sunflowers with their heads all turned up to the sun. 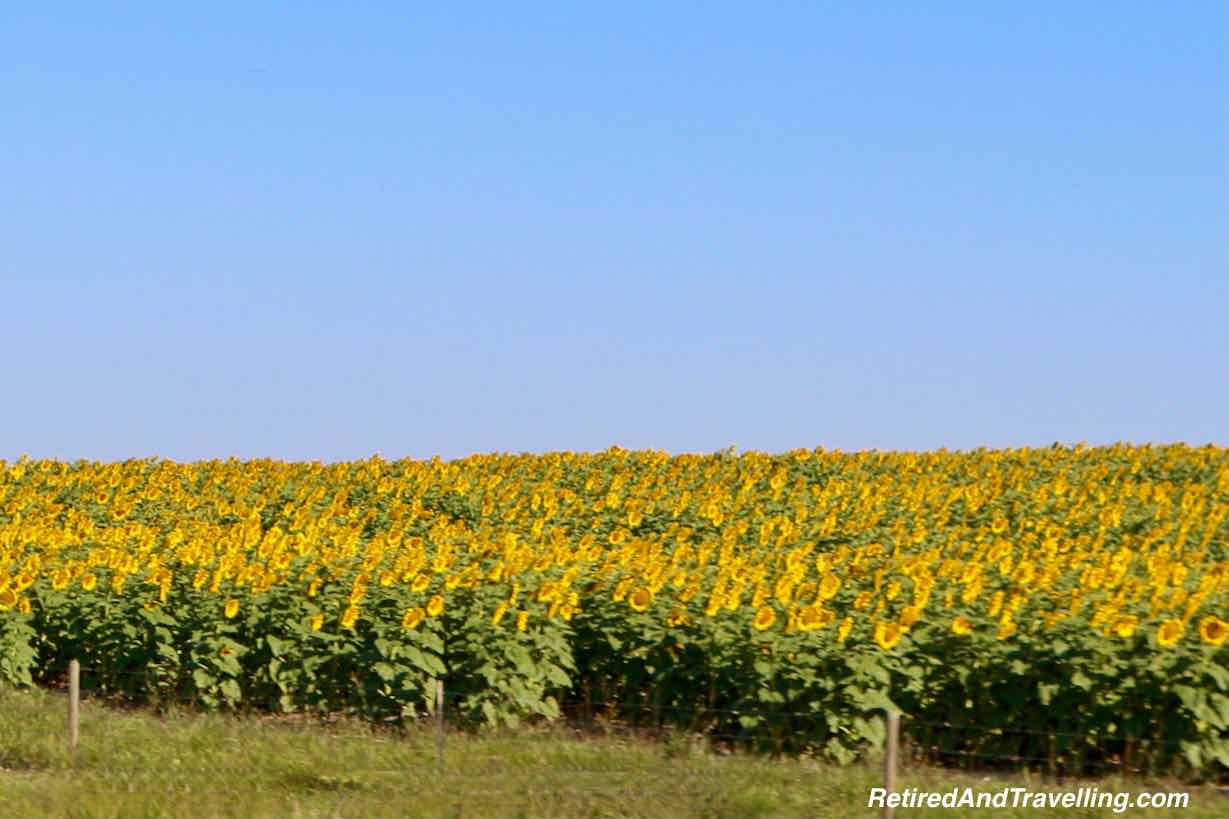 Along the way we saw amazing scenery, saw displays of American pride and we stopped to visit a few spots. Follow our journey for a taste test of what you might see ….

The car was partially loaded the night before and we left Toronto by 6:30am. Since it was Saturday we didn’t expect much traffic.  But we wanted to hit the border crossing as soon as possible. We arrived at the Queenston Lewiston border with only 4 cars in front of us.  Even with a beginner border guard, we were through in 5 minutes and officially on our road trip across the country! 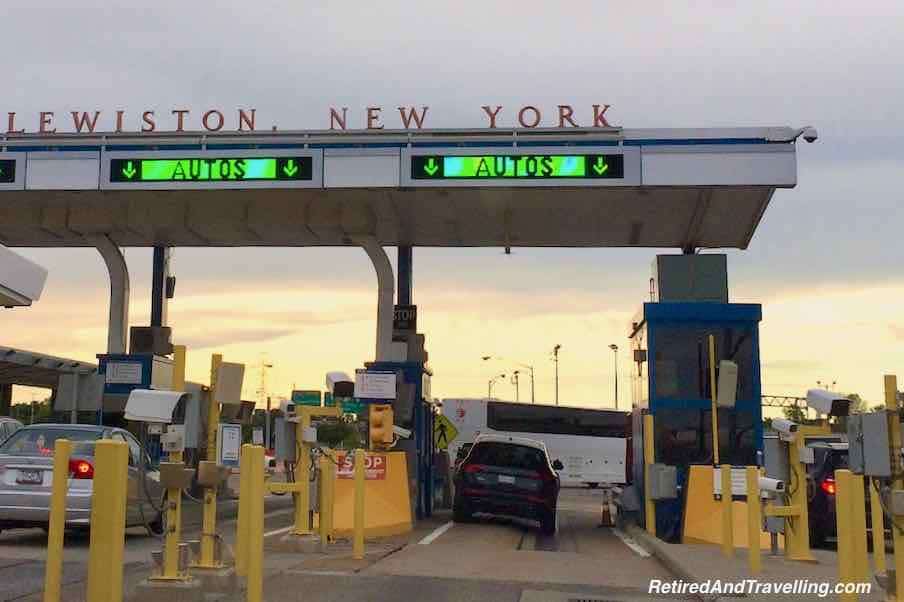 Following the GPS directions put us on the ring road I290 to bypass downtown Buffalo.  We sailed through New York state with little problems. The trip along I90 through Pennsylvania was short.  Before we knew it we crossed into Ohio.

As the signs for Cleveland started to show up, I couldn’t help but sing about the heart of rock and roll being in Cleveland. Bypassing Cleveland we went past the first of many major sports stadiums we saw as we went through the U.S. 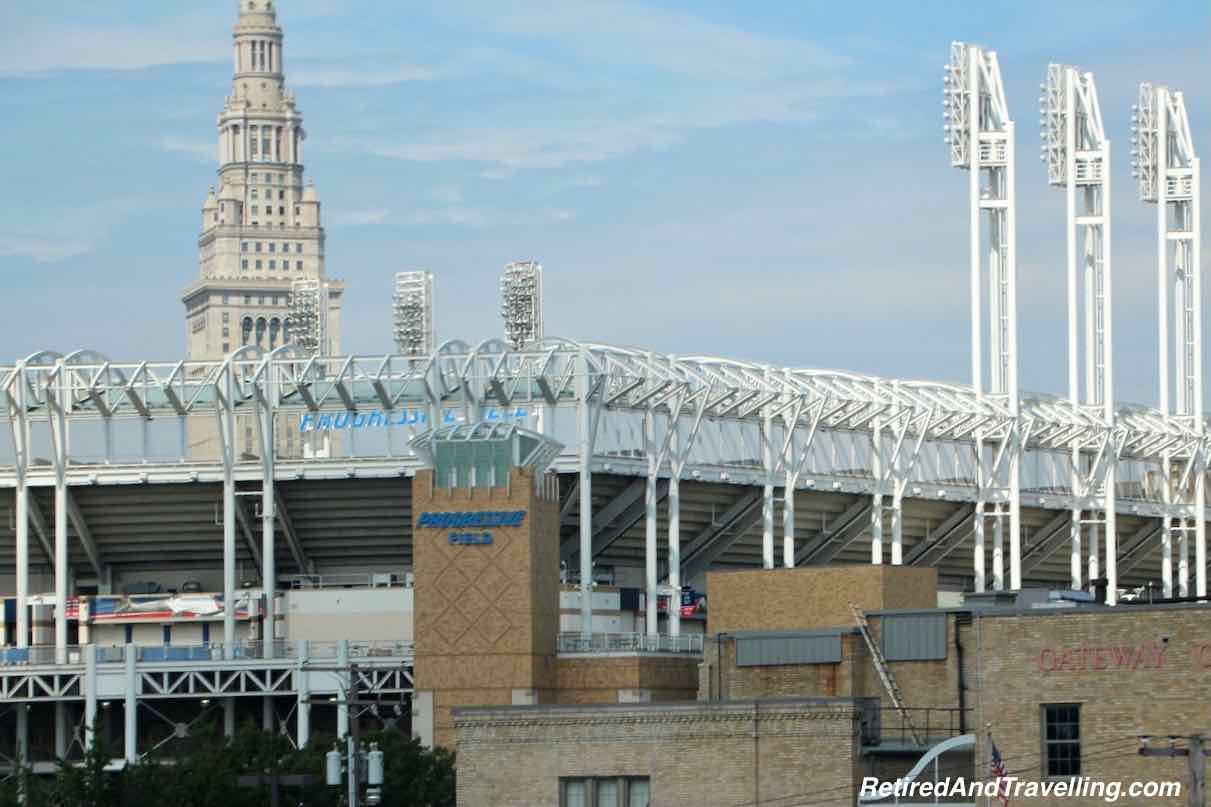 Toledo was the next milestone point. I joked about not being a storm chaser if we saw a twister.  But then David told me there had been a tornado in Toledo in April and there had been tornado warnings just that week. While the skies turned black a few times through the day, the winds remained calm as we moved through Indiana.

At lunch we both agreed that we wanted to get past Chicago on the first day.  Even if it broke our rules about how long to drive that day. The first spot past Chicago was Rockford, Illinois.  So that got entered into the GPS for detailed routing and timing.

Our decision to take I90 to get past Chicago that first day was good.  But we were not prepared with money to pay the tolls on a regular basis. In all, we paid about $45C in tolls and most of it was in this first day of travel. David did a little research before we left.  But he never managed to find a way to get a multi-state EZ Pass so that we could travel cashless. 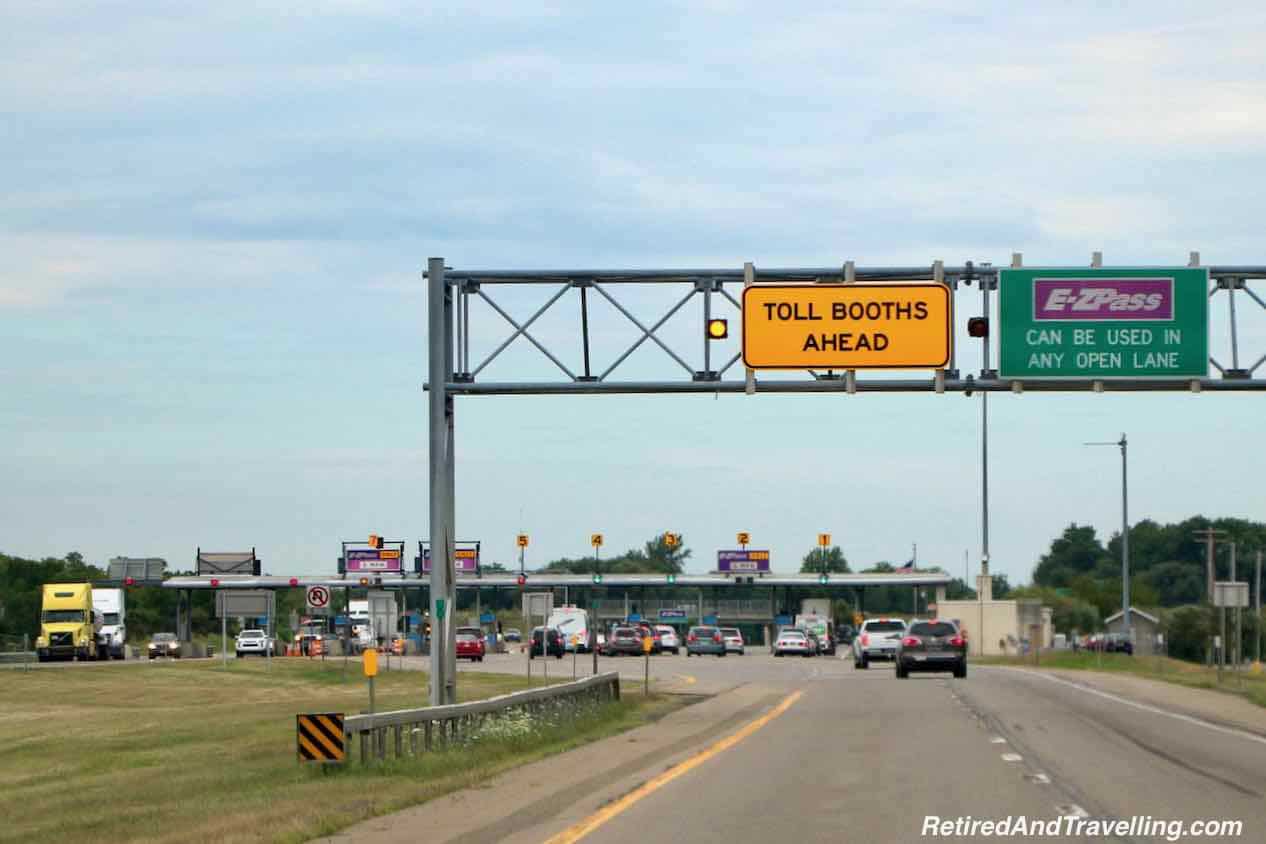 The original ETA for Rockford was about 5pm local time. Some traffic slowdowns and an extra stop slipped the arrival time. Approaching Chicago I made a bad decision to not take the ring road.  Sadly this put us in stopped traffic while every mode of public transit passed us by! 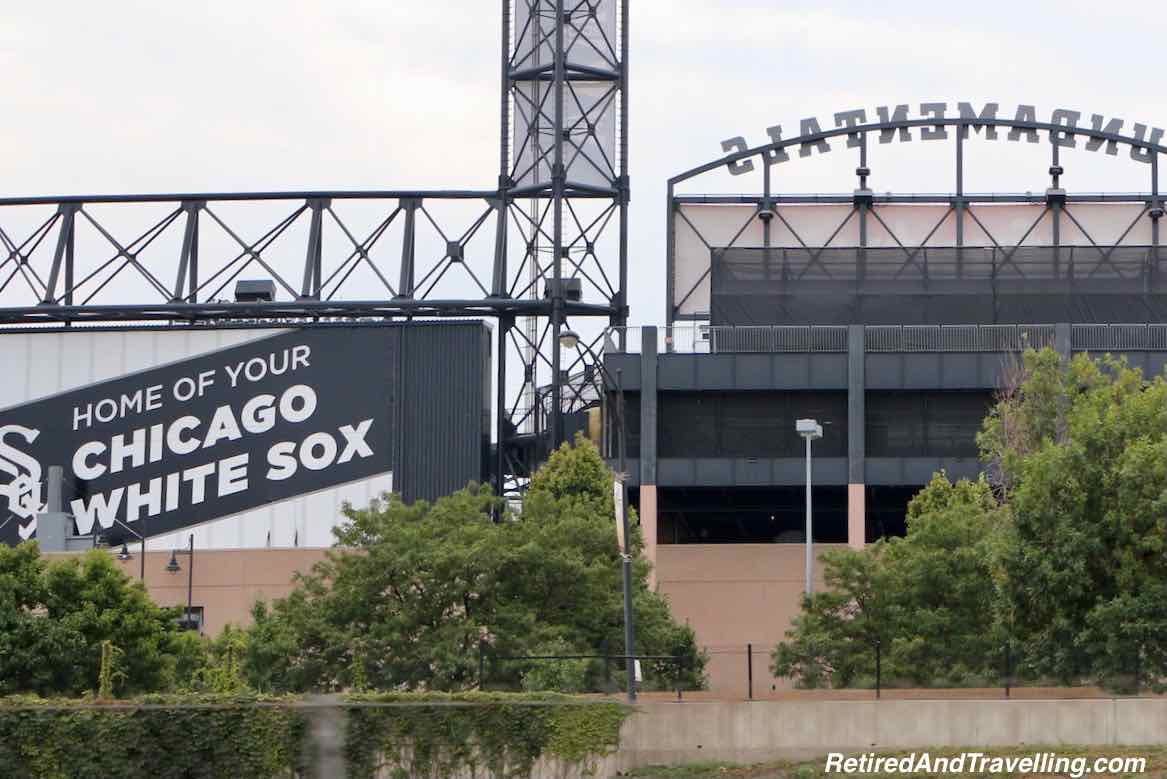 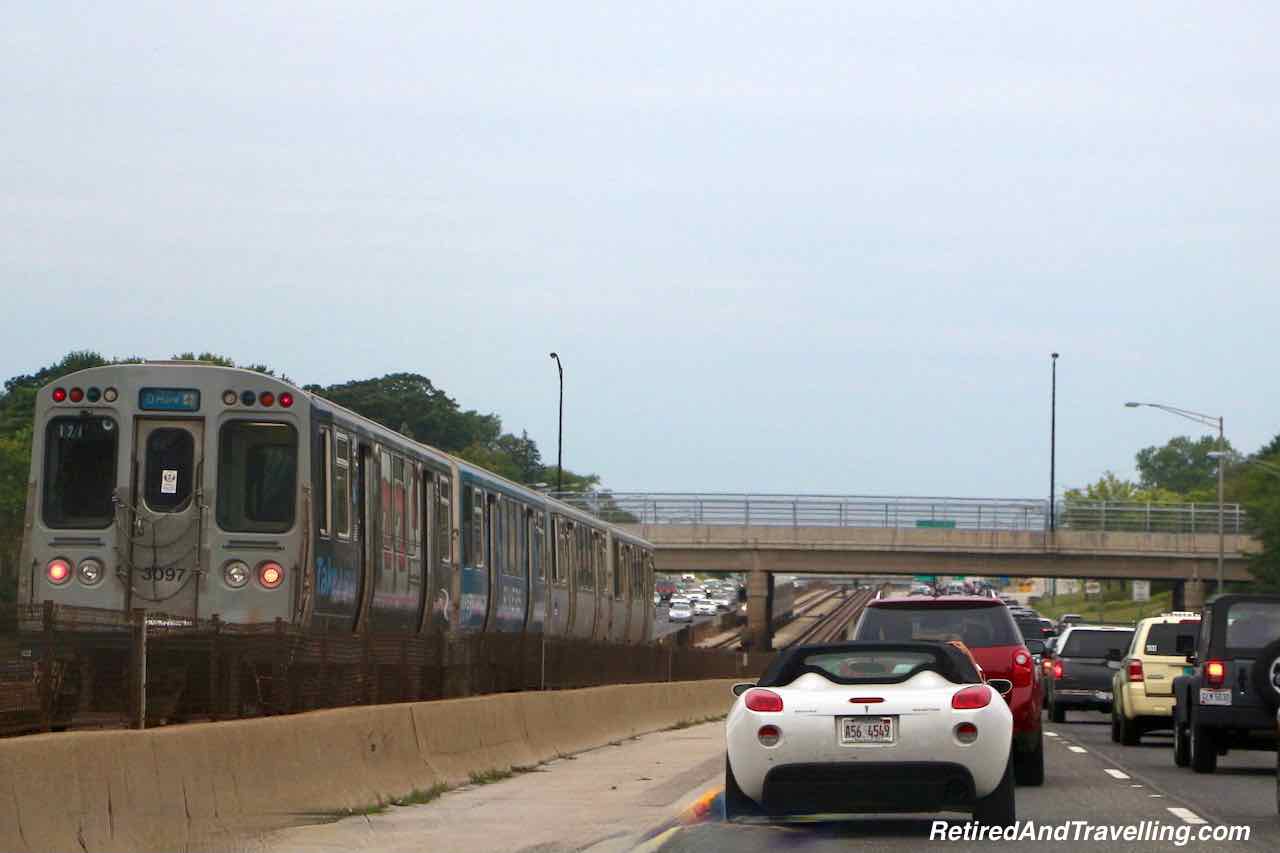 It was after 7:30 when we arrived at our motel.  We were starved and stiff from 13 hours of travel,.  So we quickly found a local spot for dinner before we settled in for the night. We had certainly failed on our first travel day to keep our driving day reasonable.

The Red Roof Inn was a compromise selection.  It was not the super cheap Super 8 and not the overpriced Holiday Inn. There was free wifi to work on planning and a good air conditioner. It was located really close to a major road.  And once the tailgate party in the parking lot shut down, it was a quiet and restful night.

We headed to Sioux Falls in South Dakota for the next stop on our road trip through the midwest USA. Leaving at 7am with grey skies, we decided to take Hwy 20 and avoid the interstate I90 for awhile.

The first part of the trip was slow as we wound through twisty two lane roads in the drizzle before the roads opened up. Only later did we realize we were past the interstate highway tolls and the speed limit went up to 80 mph! I don’t believe there was a highway in Canada that was even close to that speed. Not quite the European autoroute but a good chance to put the pedal to the metal.

Leaving Illinois and crossing the Mississippi River, we entered Iowa and stopped in Dubuque for breakfast. On Sunday morning, the town was empty.  But we found a small cafe. We stopped for gas in this town when drawn into the Oky-Doky gas bar! 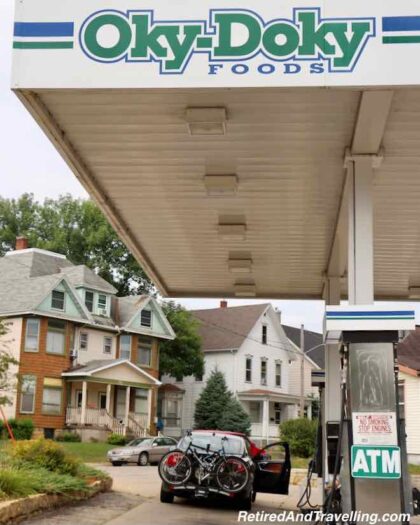 Driving through Iowa presented miles and miles of corn fields with Ethanol plant nearby. 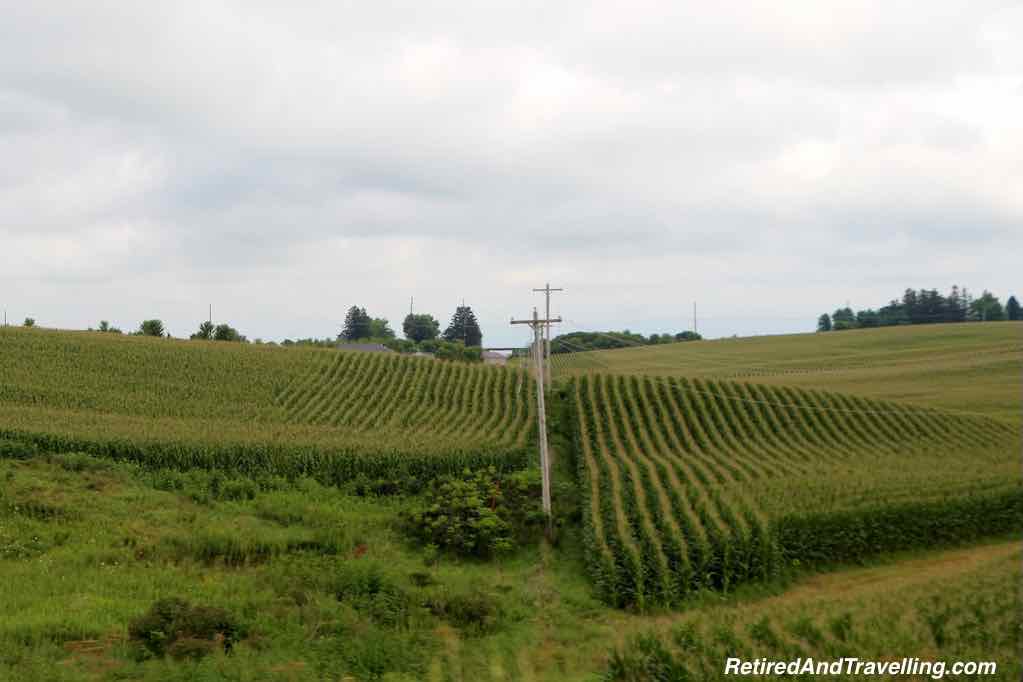 At one point David kept talking about this big bird circling over the highway.  We finally realized it  was a crop dusting plane coming in low to spray adjoining fields (aka “the yellow crop dusticus” bird). 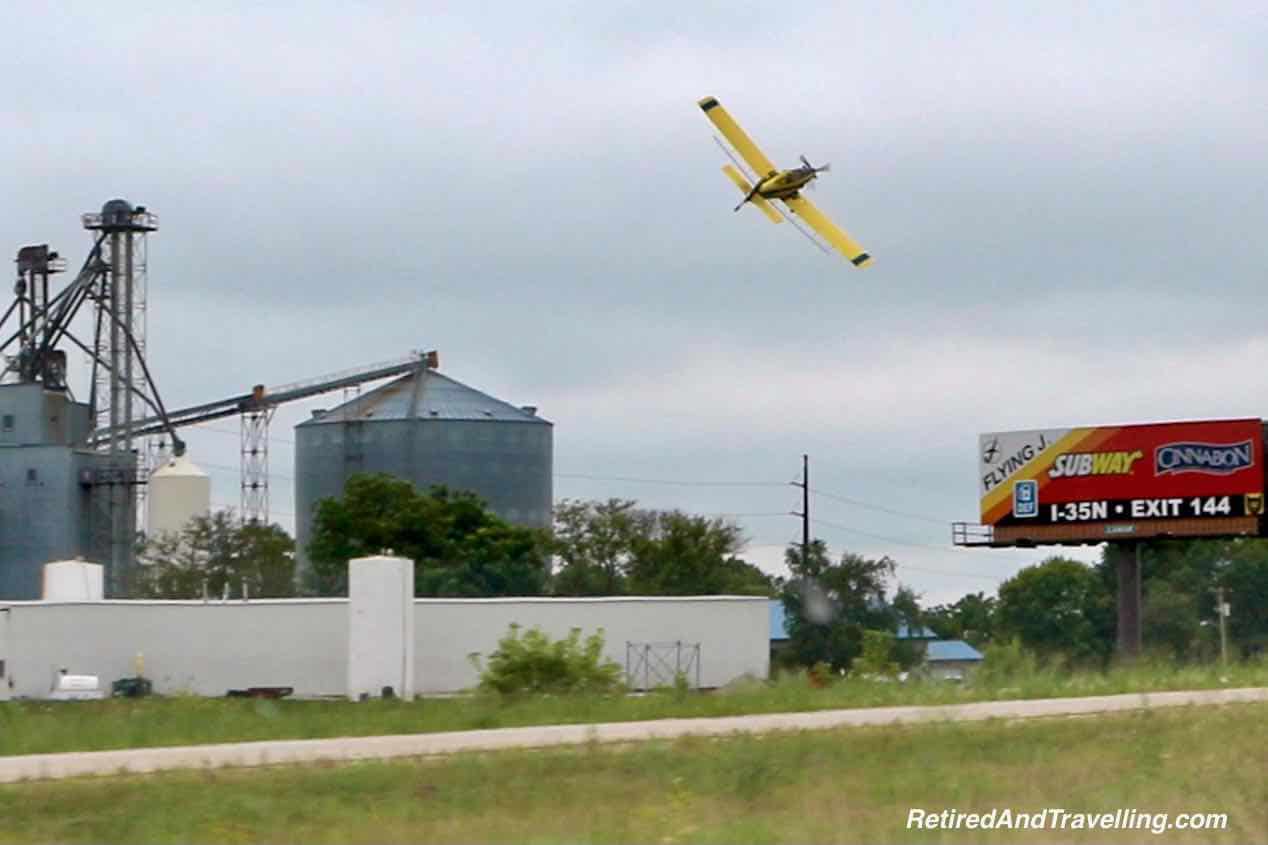 When we finally had enough of the slower road, we headed up at Hwy 35 in the direction on Minneapolis and got back on I90.

Travelling on I90 was quick and we arrived in our Super 8 in Sioux Falls motel just as the skies turned black and dumped. We got a big room, with cold a/c and a good bed. Since we travelled with our favourite pillows, we didn’t worry about the crappy hotel pillows.

We were back on the road again at 7am on our road trip through the midwest USA.  We planned an 8 hour driving day. Driving at 80mph on I90 let us make great progress.  But we added a few hours when we chose a few interesting detours.

We were fascinated to find as we drove west that I90 was regularly closed to traffic. There were signs that said the highway would be closed and that you needed to head back the way you had come. To ensure that cars obeyed this, actual barriers came down to close the road. We figured this would be in bad weather on the open stretches or for construction. But when we drove back home from Vancouver to Toronto in the winter, we kept this in mind. 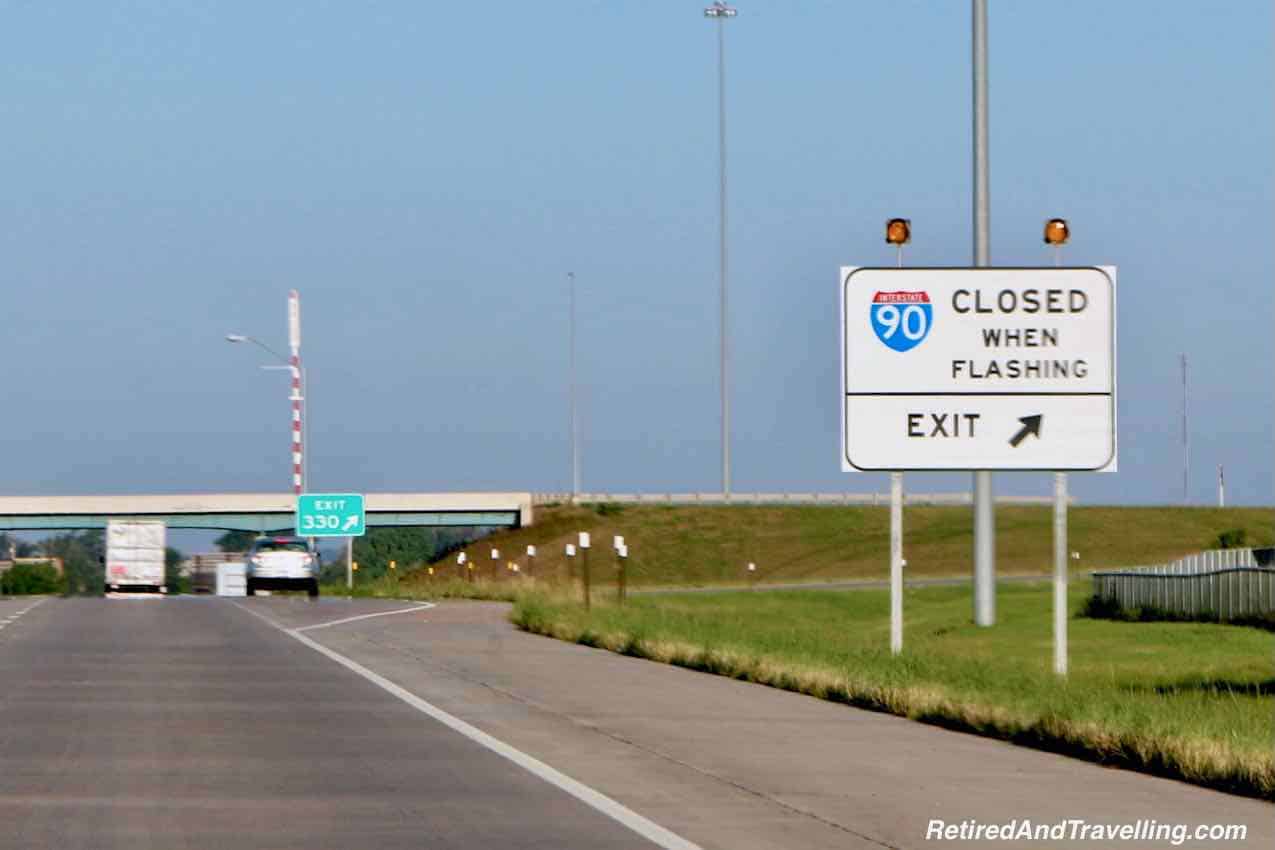 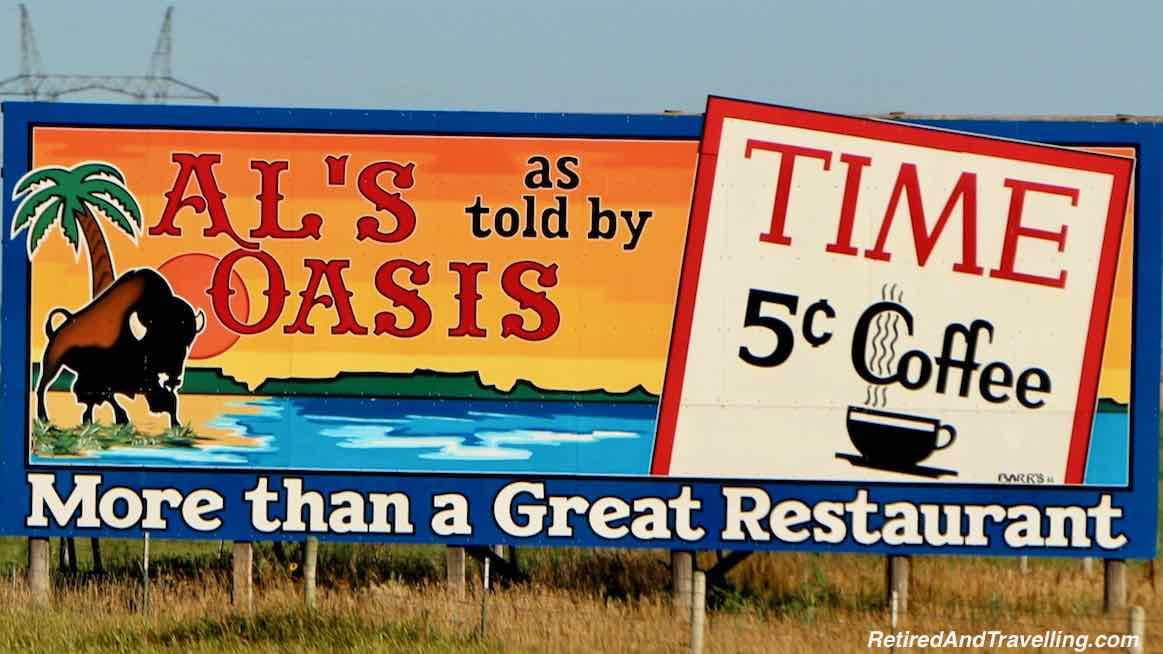 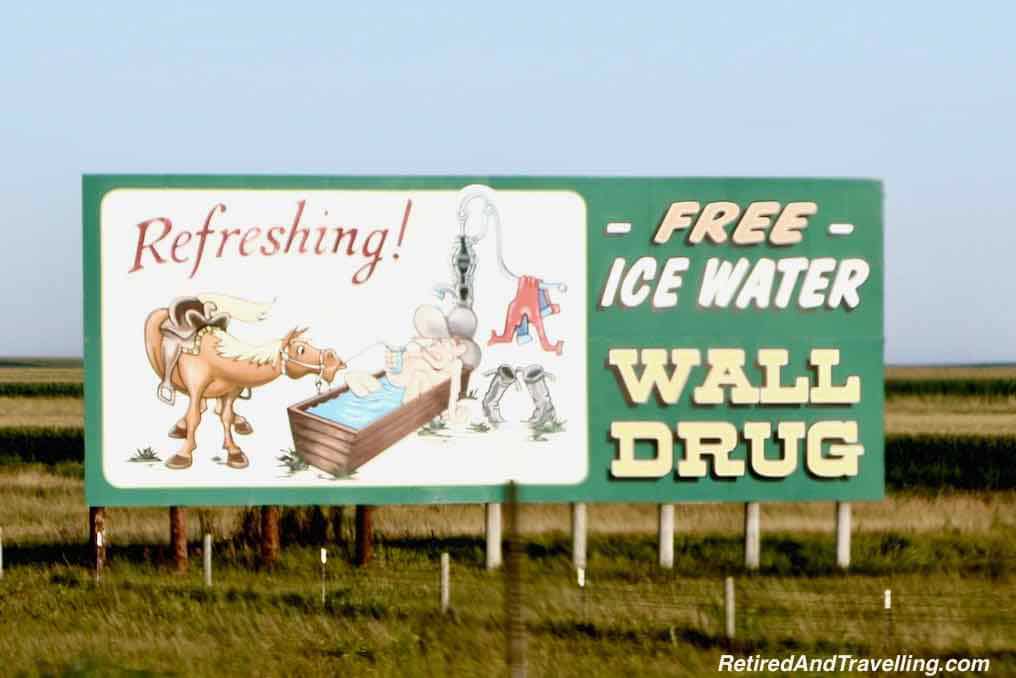 If we wanted to shop for tourist trash or buy “local Indian moccasins” made in the Dominican Republic, these places were the places to stop.  We were glad we stopped at Big Als for the best selection of pies ever. Throughout our drive, we continued to see the stragglers that left the recent motorcycle rally in Sturgis.  A big group of them decided that Walls Drugs was worth a visit. 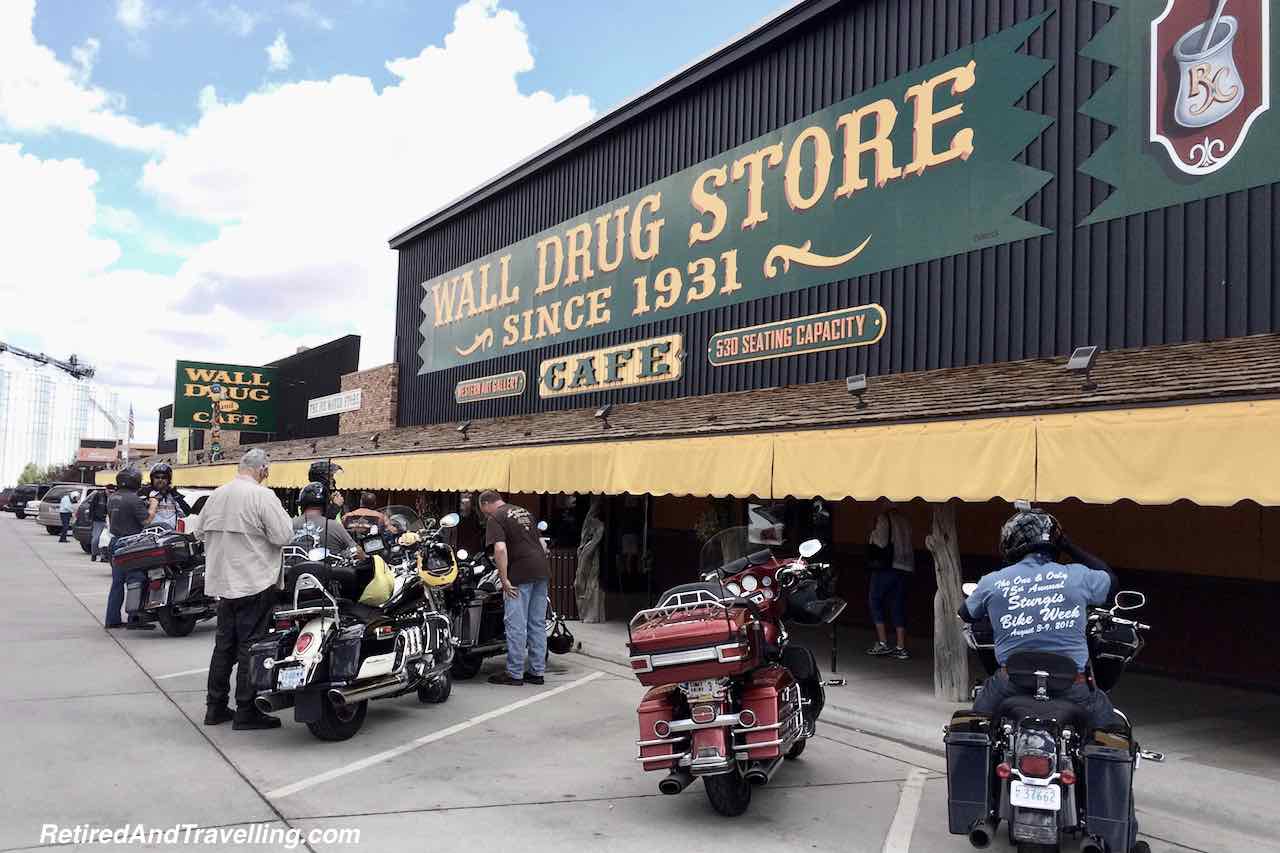 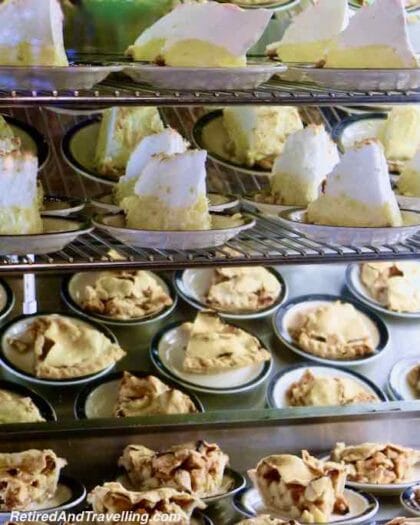 We passed the Badlands and the signs for dinosaurs.  But we did not get off to visit. If we had more time, we definitely would have stopped.  The Canadian Badlands in Alberta were a Unesco World Heritage Site and we knew they were very popular with visitors. 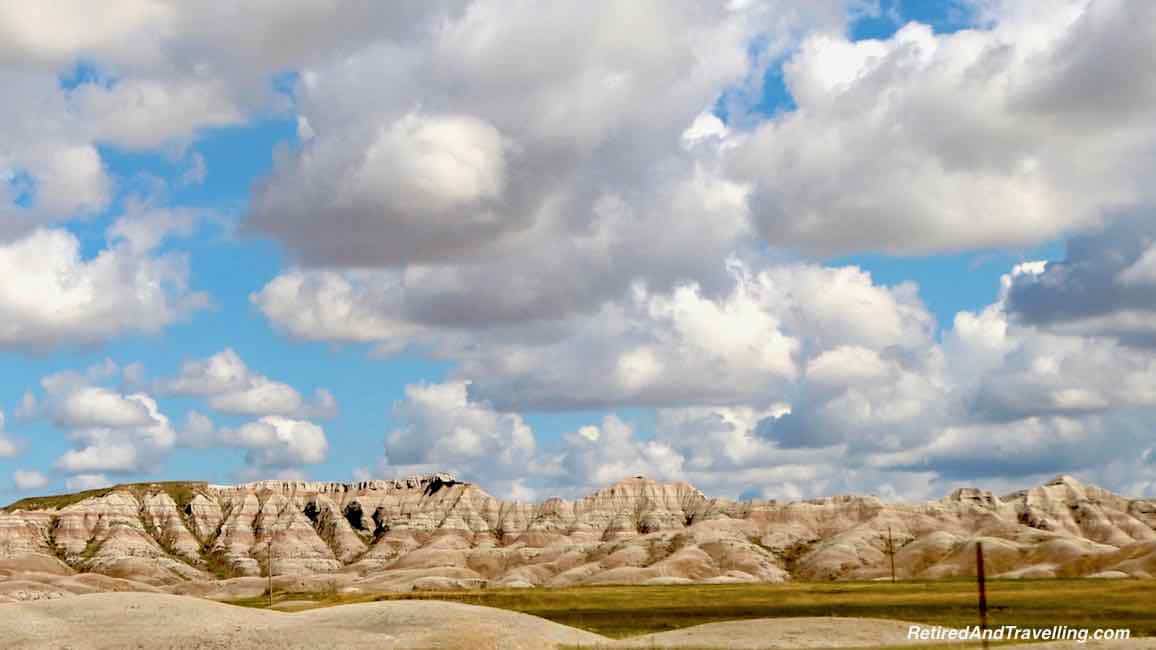 Our big detour for the day was to see Mount Rushmore. We took the much more scenic back route in and managed to catch sight of the famous faces from many angles. 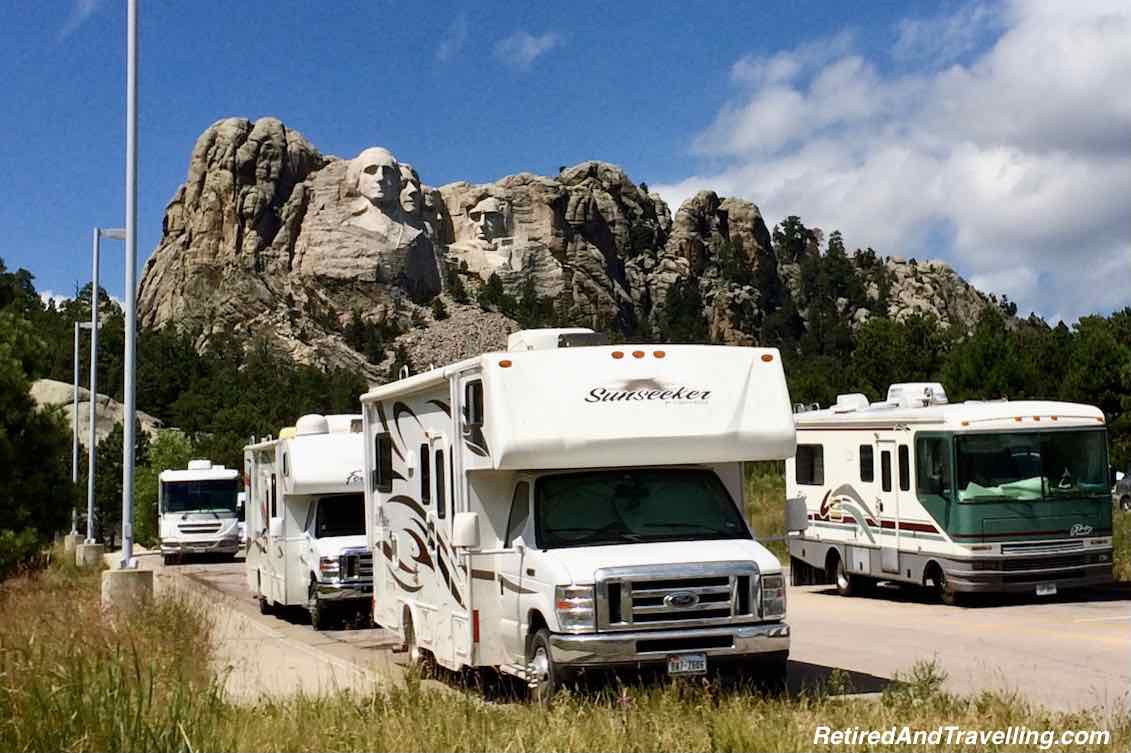 Taking Hwy 16 back up to I90, we crossed into Wyoming for our stop for the night in Buffalo, WY. We were in Buffalo country. So every field we passed got scrutinized. David was sure he saw one buffalo standing by the fence at the side of the road.  But of course we got no picture to prove it. Luckily we found a few painted ones and found juicy bison burgers for dinner one night. 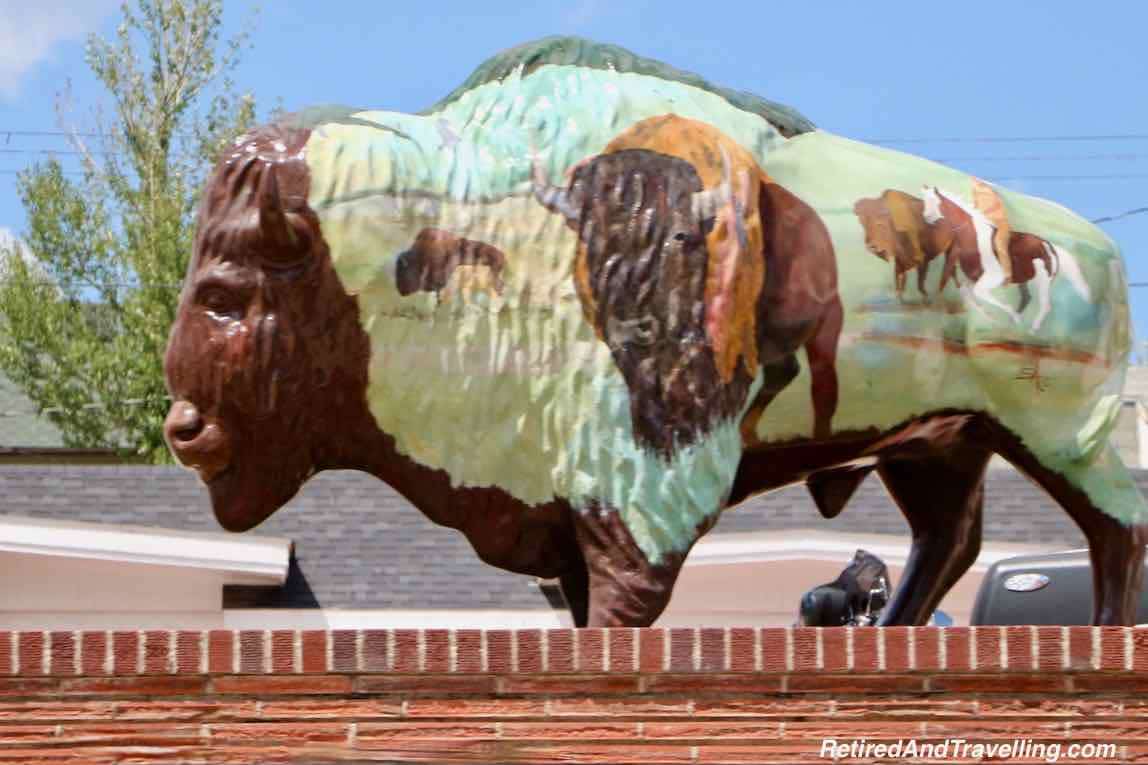 David booked us into the Big Horn motel to test how much of a princess I really was. I chose brand name highway hotel brands (Super 8, Red Roof, etc) and was ok with this level of room and service.

While boasting a great TripAdvisor rating, the Big Horn motel was one step down.  The room was small but adequate for a one night stop. While the a/c blasted cold, it was so loud my ears felt assaulted by the morning.  For David, the tasty chocolate chip cookies made up for any failings.

An Interesting Road Trip Through The Midwest USA

We had enjoyed the views on our road trip through the midwest USA and were glad we travelled from Toronto to Vancouver through the U.S. Next we headed into the foothills on our way to the Pacific coast!

Have you done a road trip through the midwest USA? What were your stops along the way? What detours did you take to see tourist spots? 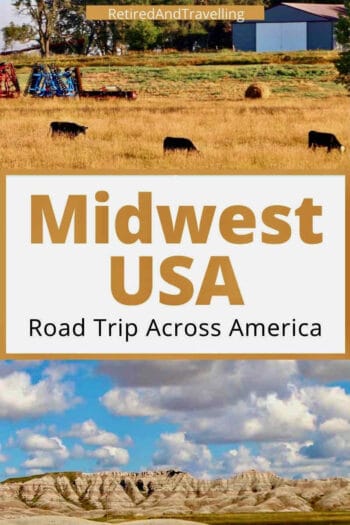 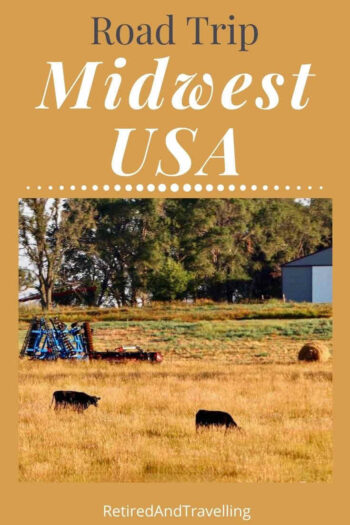