Climb the Foothills To The West Coast

We finished our road trip across the country climbing up the foothills to the West Coast.  The first part of our road trip from Toronto to Vancouver was an interesting drive across the U.S. through the mid-west.  This last push put us in Vancouver for the fall.

On the second half of our cross country trip, we began to climb the foothills to the West Coast.  We were on the road by 7:30, with a brief stop at the front desk to pick up home made cookies. This held us until our stop in Hardin for a proper breakfast.

We found it was easy to pick out the tourists as we headed into the western states. If our cameras didn’t give us away, our shorts and sandals were markedly different from the local dress of blue jeans, ball caps and cowboy boots. We could not understand the long pants when daytime highs hit the mid-30’s °C (approaching 100°F).

It was a fast drive along I90 as the heat creeped up again. We drove through the foothills and finally saw the mountains in the distance. 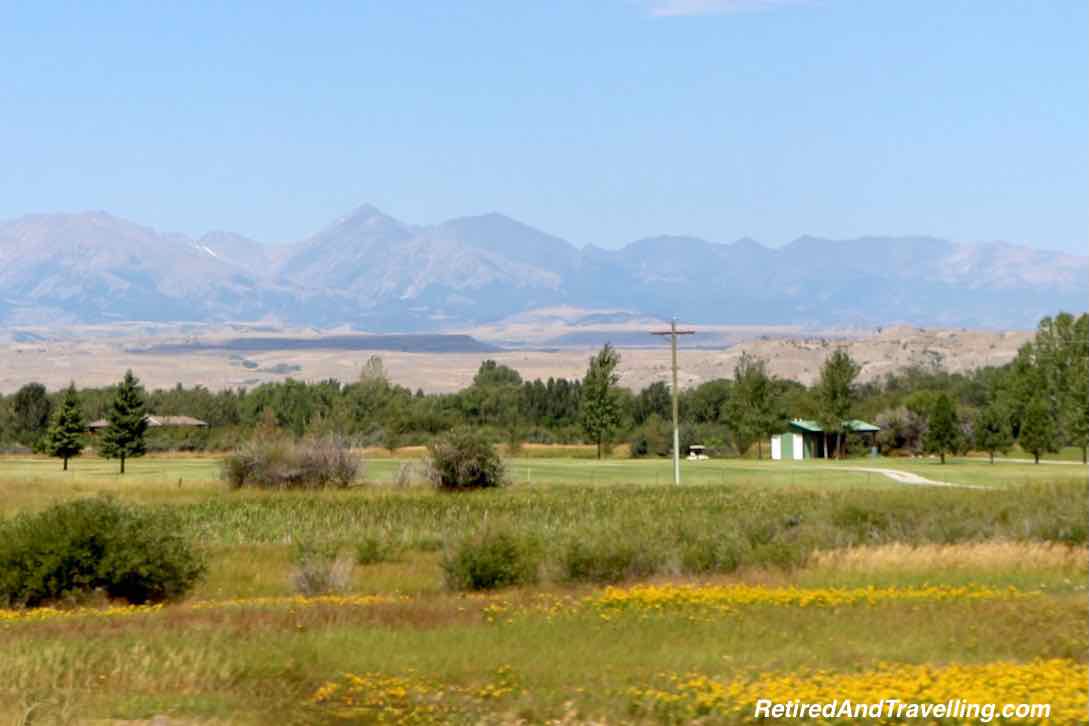 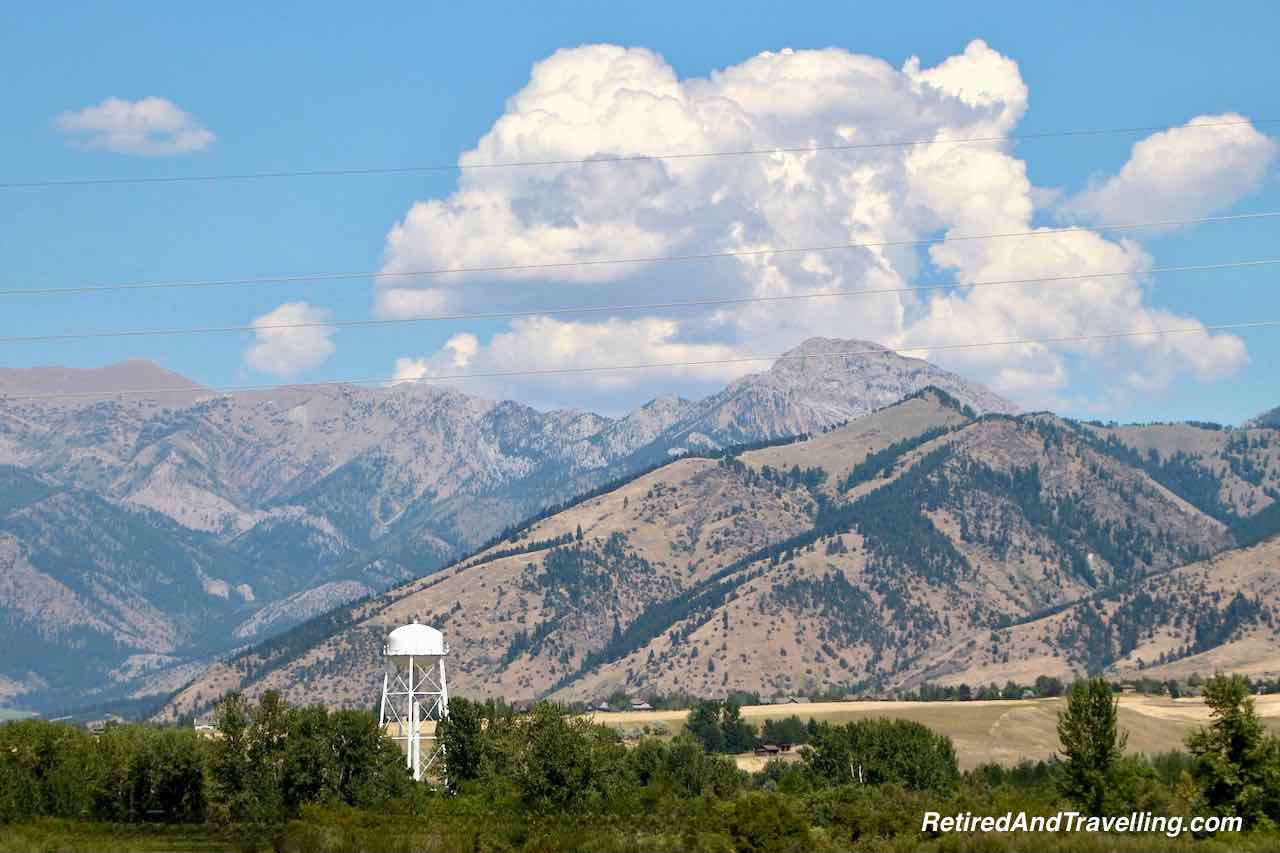 As we approached the foothills, we found an impressive display of wind turbines. Later in the trip when we hit the mountains, we saw our first massive solar array. When travelling in Italy for 10 weeks, every drive seemed to provide a view of wind turbines or solar farms. We were glad the U.S. was harnessing these natural power sources. 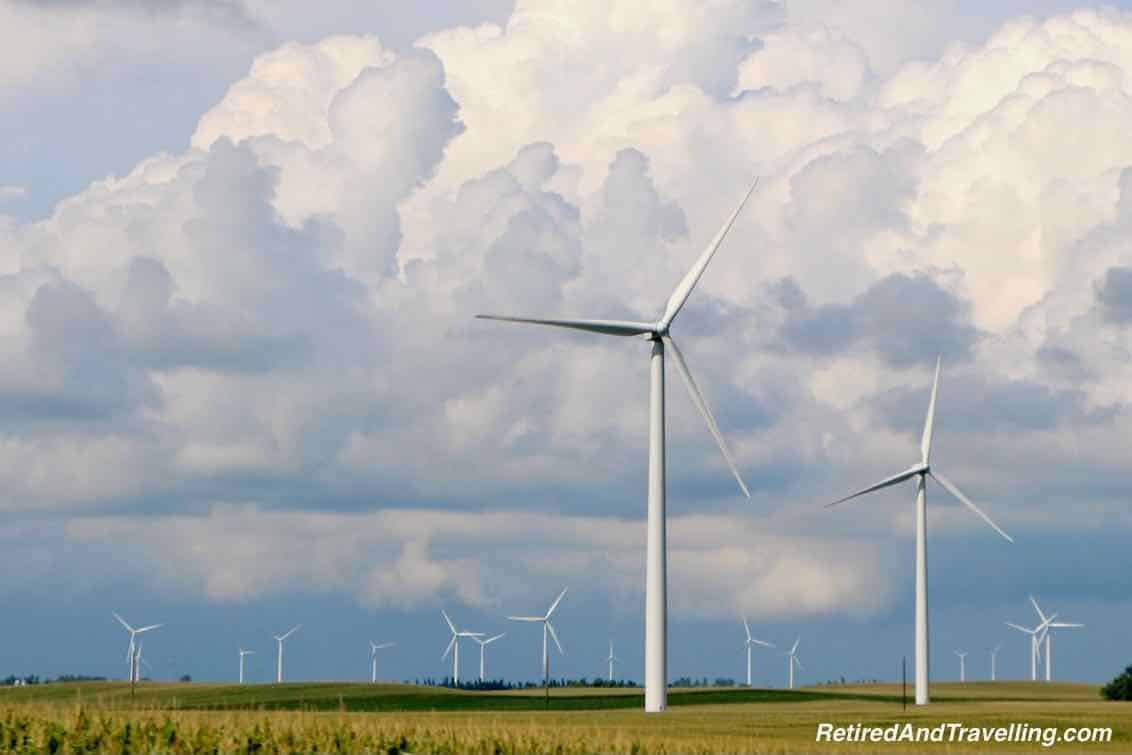 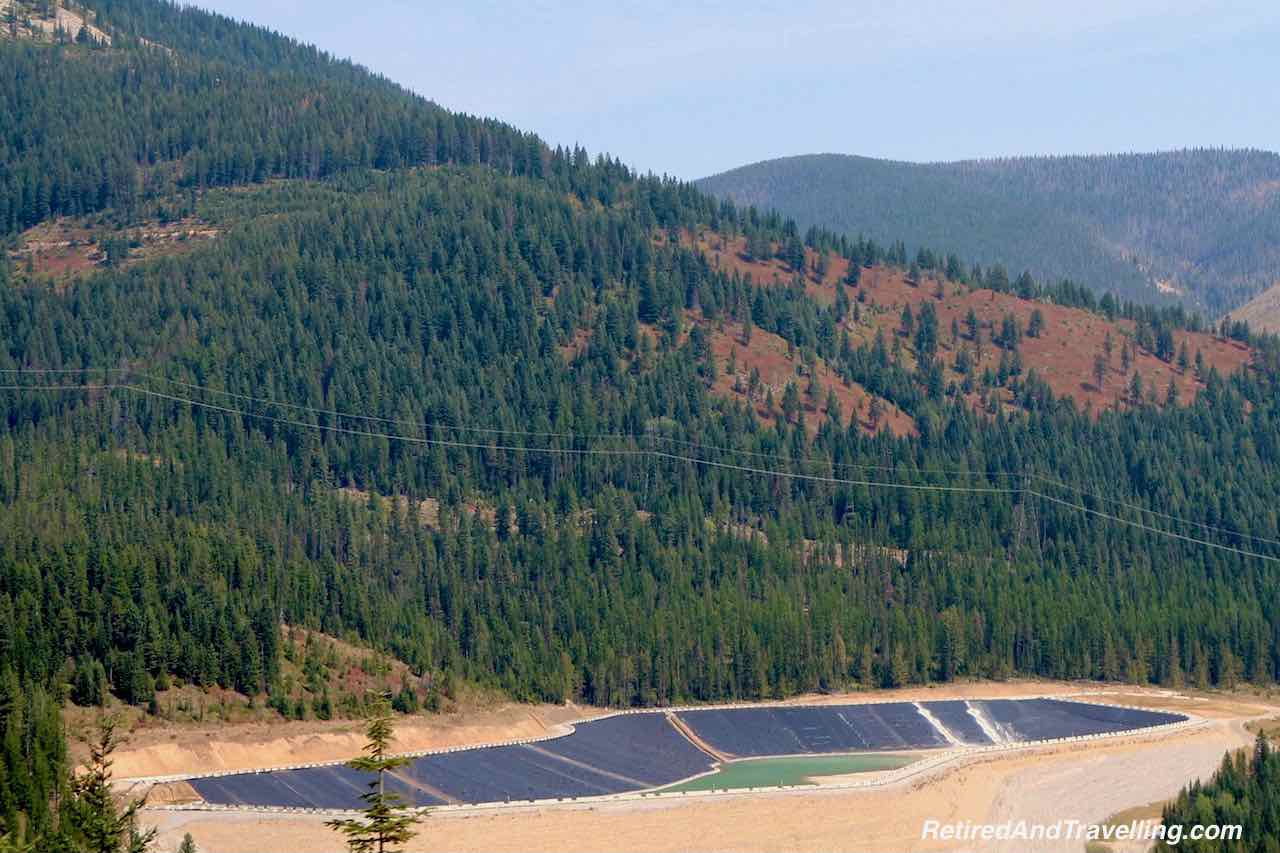 Views As We Crossed The Foothills To The West Coast

The western vista of wide open plains and the mountains was interesting to us.  But maybe not the same “ahhhhhh” moment that others from the east coast may feel. Both David and I travelled across Canada before and did several trips across the Rocky Mountains. While not quite jaded, we took in the scenery and absorbed the nuances that others might not see on their first visit. 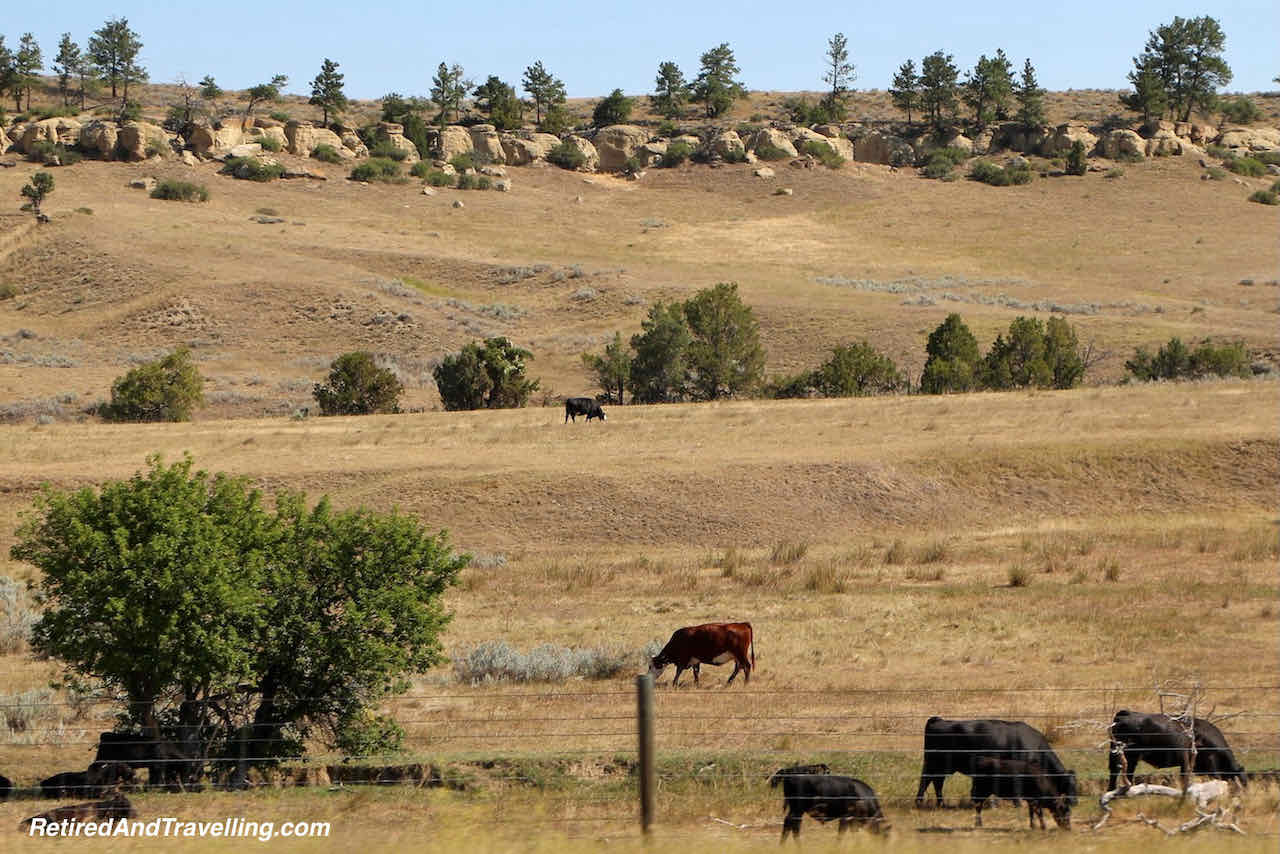 With large herds of angus cows in the fields all along the way, it was surprising that we stopped for ribs for lunch in Billings, Montana. 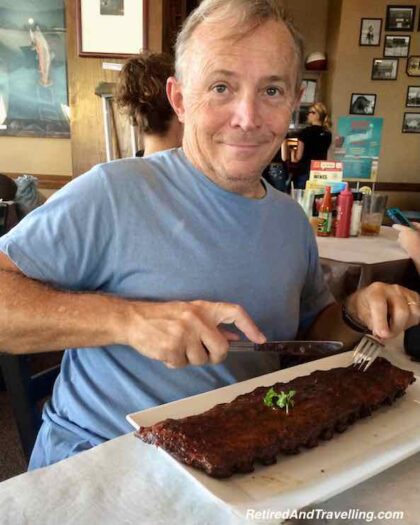 Since we planned a short driving day, we arrived at the Best Western in Butte, Montana at a reasonable hour.  We actually had a few hours to relax before we dropped exhausted into bed.

It had been a horrible few months of really bad news and I was beginning to think that I was a bad news magnet. But maybe our luck was changing! We originally planned to stop in Missoula, Montana that night. And that night Missoula got the mother of all storms (weather guy called it “windaggedon”). Winds were as high as 74mph. Power out for thousands! Good thing we were settled safe in Butte, Montana!

Since we had planned another short driving day, we lounged a little before we got on the road. The Best Western was our best hotel yet with great beds, cold a/c, big rooms and a wide selection at the “free” breakfast. I must admit to scowling when I saw hotels including free breakfasts and free wifi – they have built these “free” amenities into their price!

The price break we got and really appreciated was the military discount. As a retired Canadian military officer David got the great discounts offered in the US. He got much less recognition and discounts when we travelled in Canada.  Although we were pleased when we travelled last to Bahamas and saw that WestJet matched Air Canada’s free baggage policy for the military.

I did the first part of the drive and of course it was again the worst part of our driving day.  There was heavy rain as we started into the twisty mountain roads. Luckily we drove out into bright sunshine after about an hour. 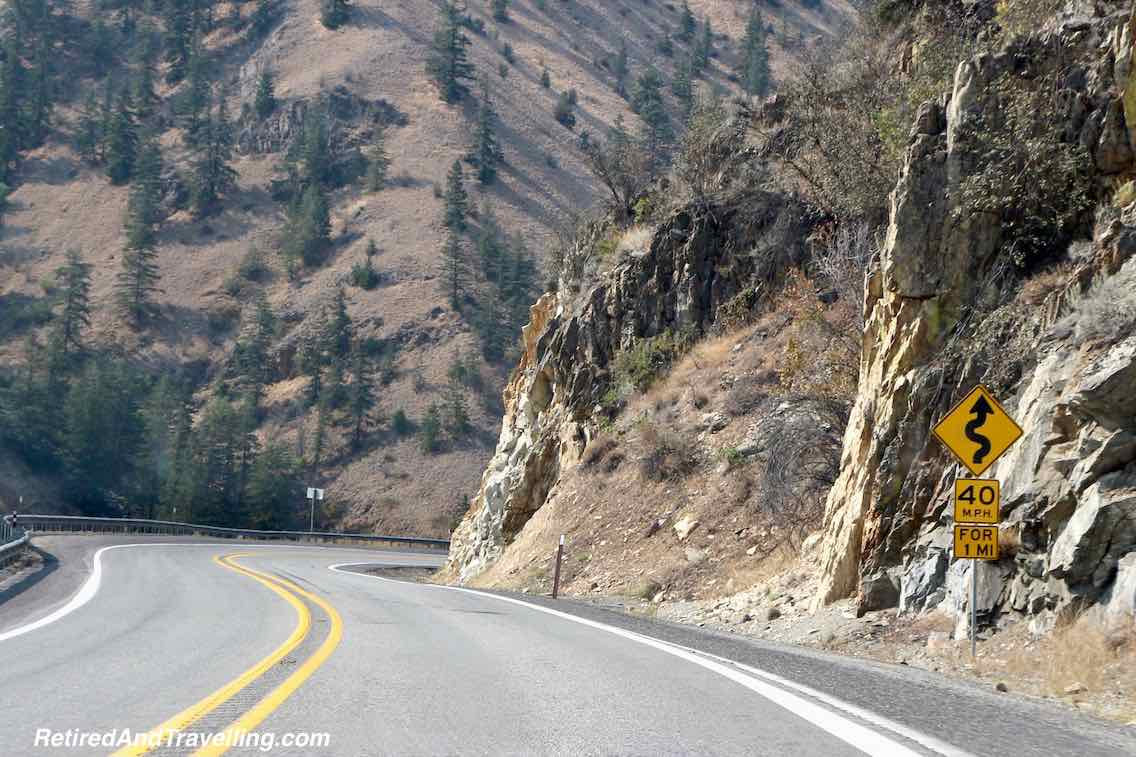 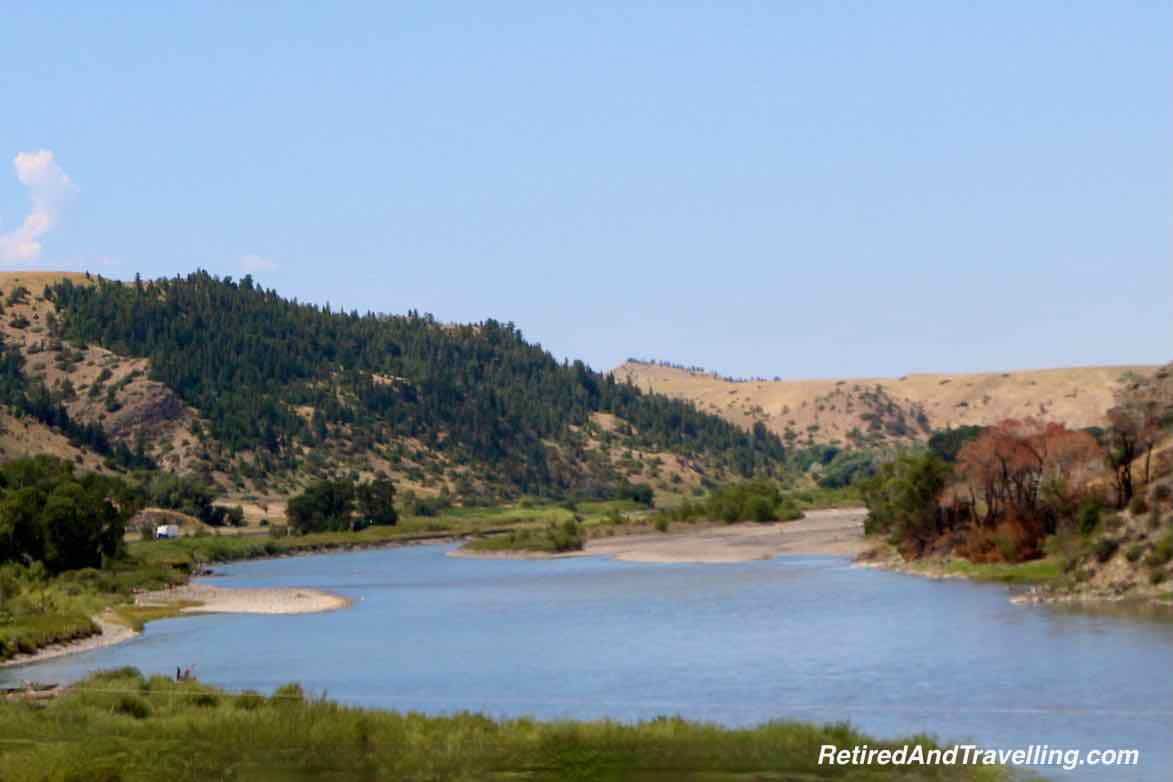 A Stop In Spokane Washington

With a few short stops along the way, we arrived at the Best Western in Spokane.  This Best Western was not as nice as the previous one.  This reinforced the variability even within hotel brands. We got what was billed as an “upgrade”.  But the upgrade moved us to the very noisy side of the hotel in a room.  And we actually heard every step the people made in the suite above us.

We were in Spokane for 2 days.  It was was good to stop after we drove steadily for day.  It was great to walk around the town and the Sculpture Walk at Riverfront Park.  Even in temperatures over 100°F! 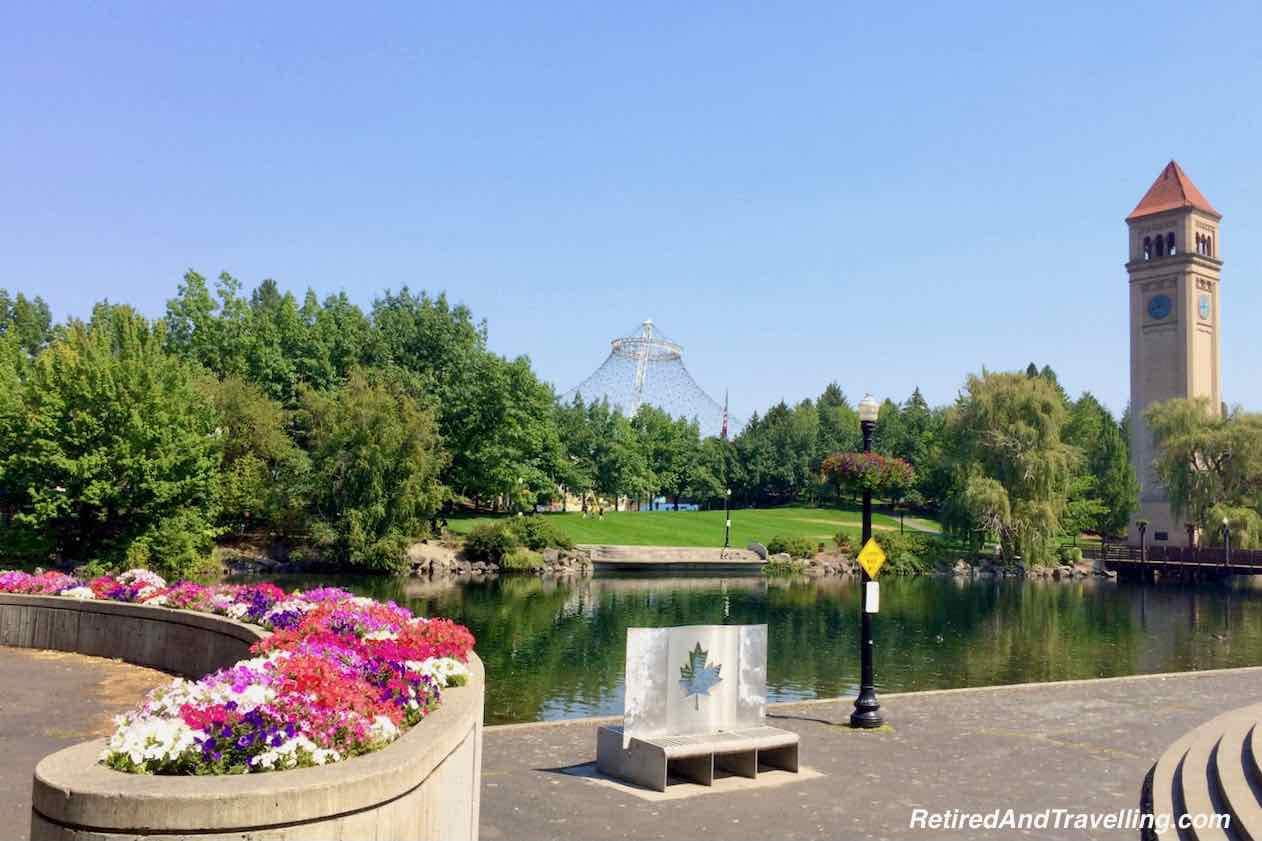 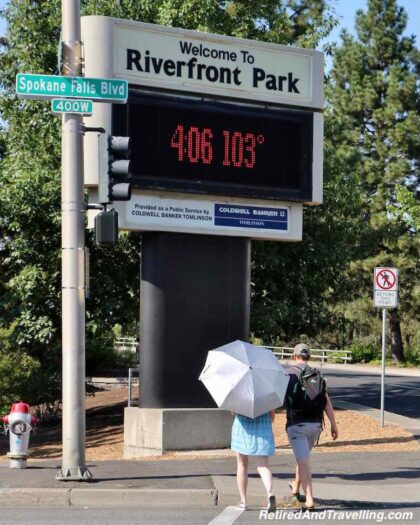 We thought we could lounge a little before we left Spokane.  We had a short driving day and another 2 days stop planned. But we wanted to drive the more scenic route to Bellevue.  So we packed up early when we saw the forecasts for bad weather on the mountain roads and hoped to beat the weather.

Driving into the foothills, the roads climbed and dipped and twisted.  But they kept heading steadily higher until we passed through elevation 4860 feet and through Stevens Pass. In many places, the clouds were low hanging.  They seemed to be at the level we were driving.  But we missed the worst of the weather and drove out of the clouds. 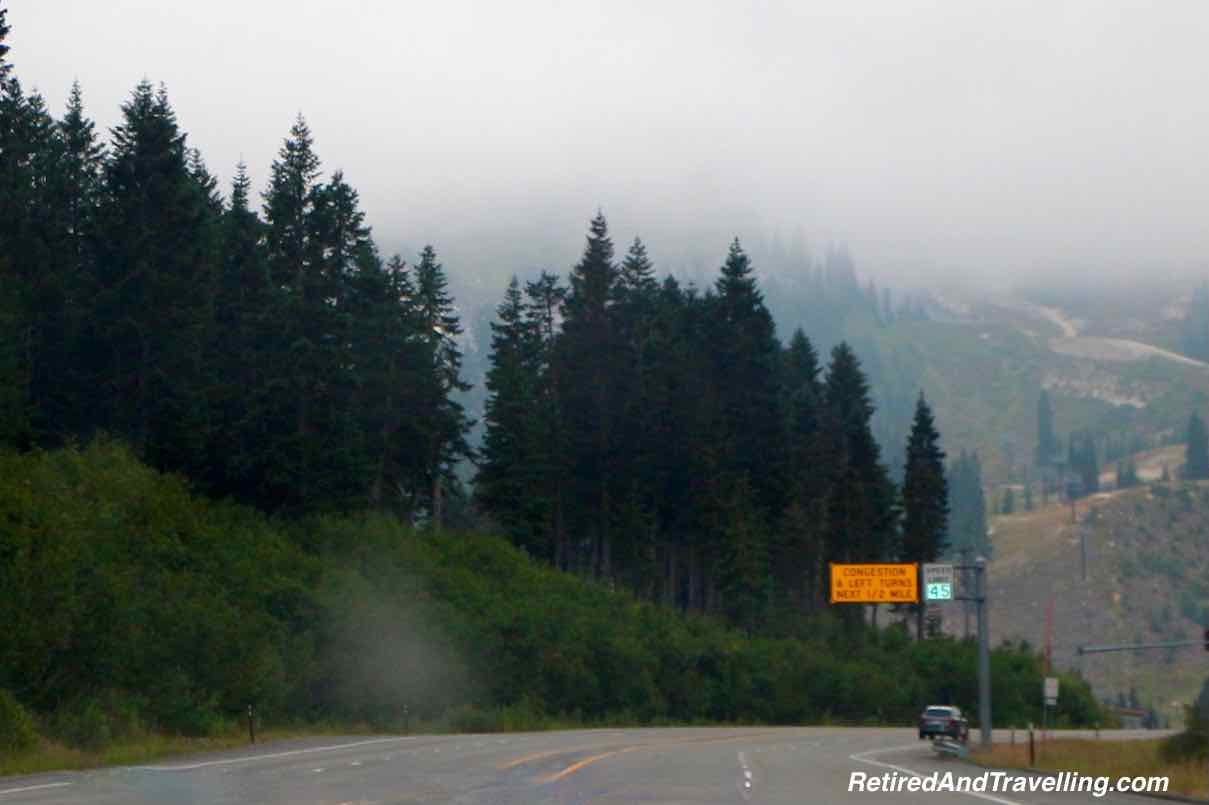 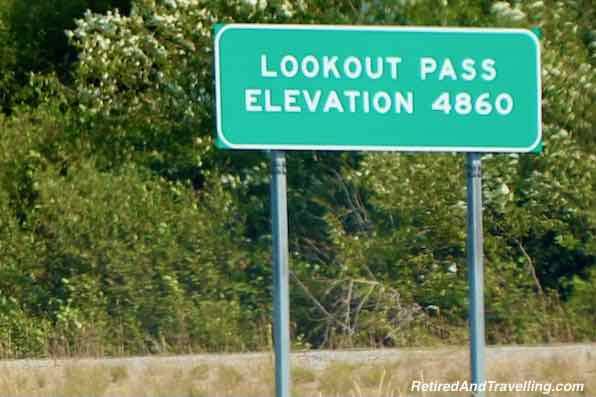 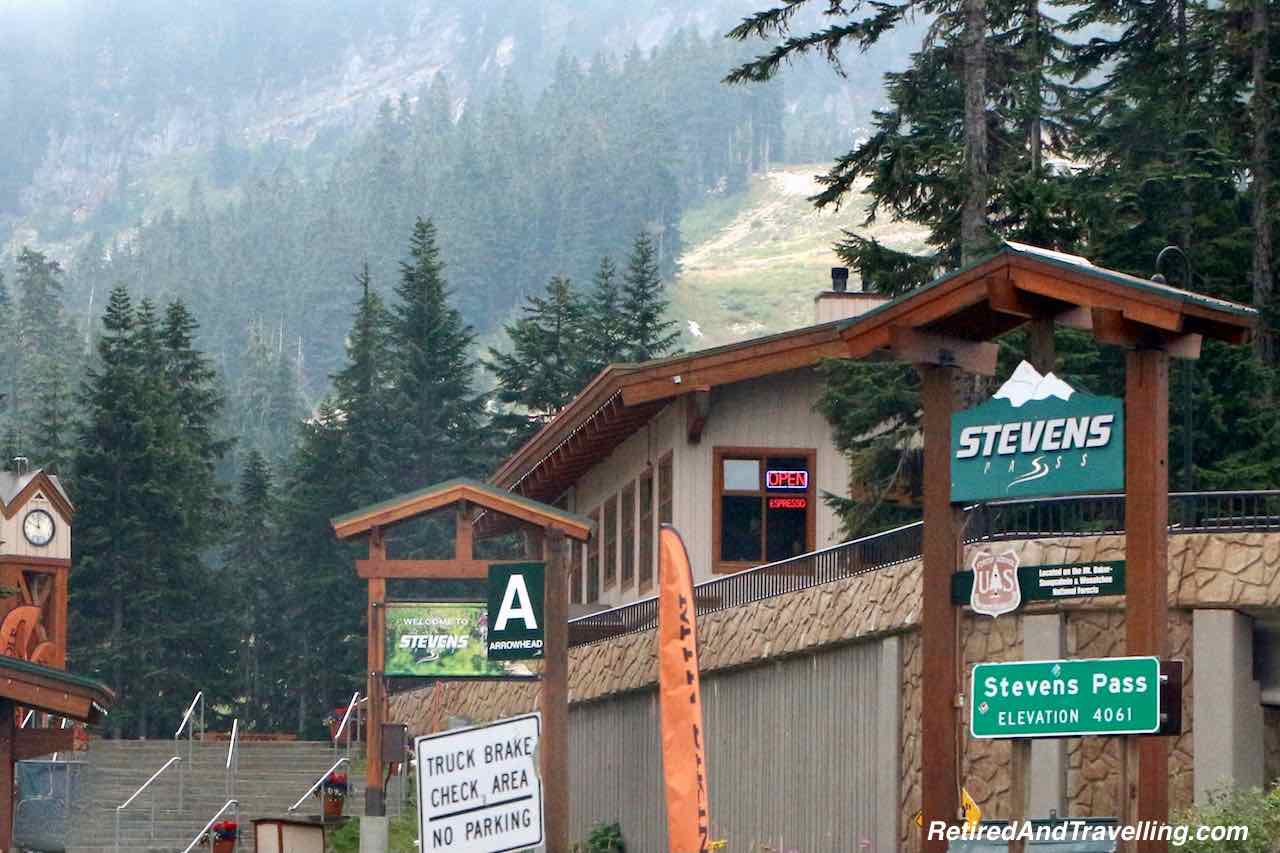 It was suggested that we stop in the quaint town of Leavenworth with its Alp-like architecture throughout most of the town.  But we passed through with only a stop at an Alpen drive-in restaurant! 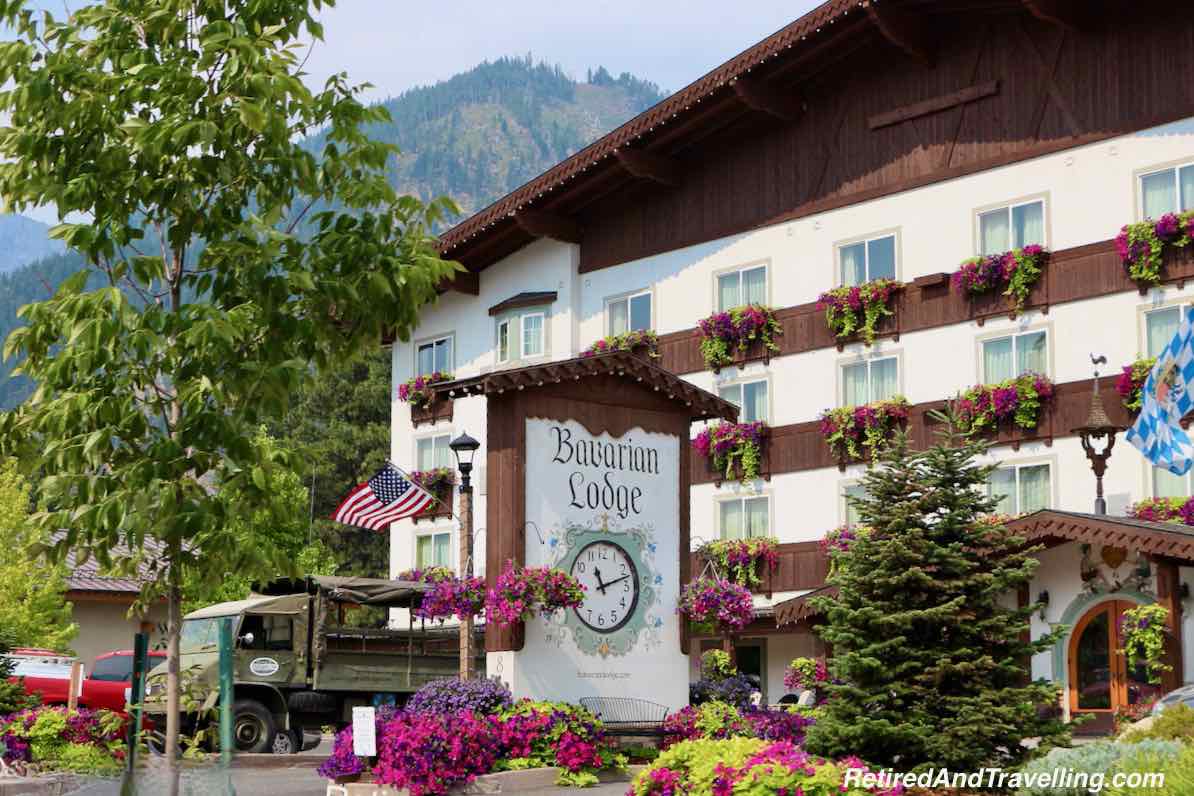 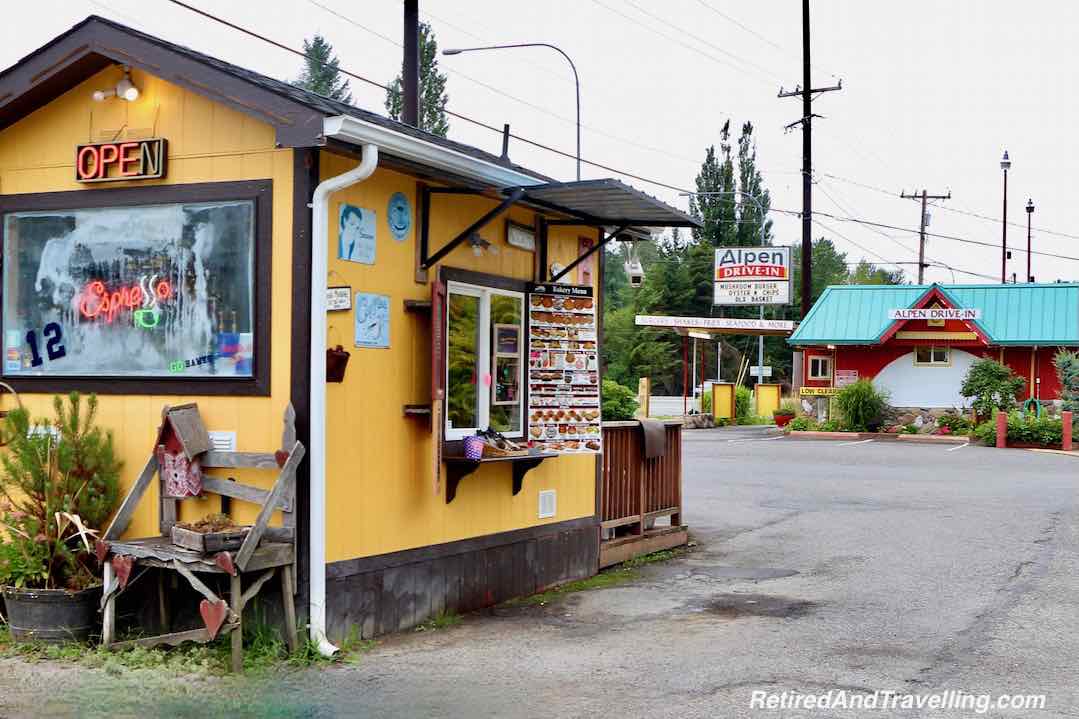 We were still trying to get our Airbnb reservations completed so that we could finalize plans for the last leg of our trip. When our arrival date was firm, we debated whether we should stay right in Seattle or on the outskirts at Bellevue for the 2 nights before we headed into Vancouver. Knowing that we would likely be back for a weekend trip from Vancouver to Seattle, we opted for a relaxing stop in Bellevue with no sightseeing. There was some retail therapy while we stayed in Bellevue.  But most of the time we just lazed around and enjoyed not being in the car.

Day 9 – Bellevue, WA to Vancouver, BC

Vancouver was only a few hours drive from Bellevue so we again planned the more scenic drive. We debated taking the detour on the Mukilteo ferry over to Whitby Island.  But saved that for another trip. Instead we headed towards the water along Chuckanut Drive with the convoys of bicycles on that route. 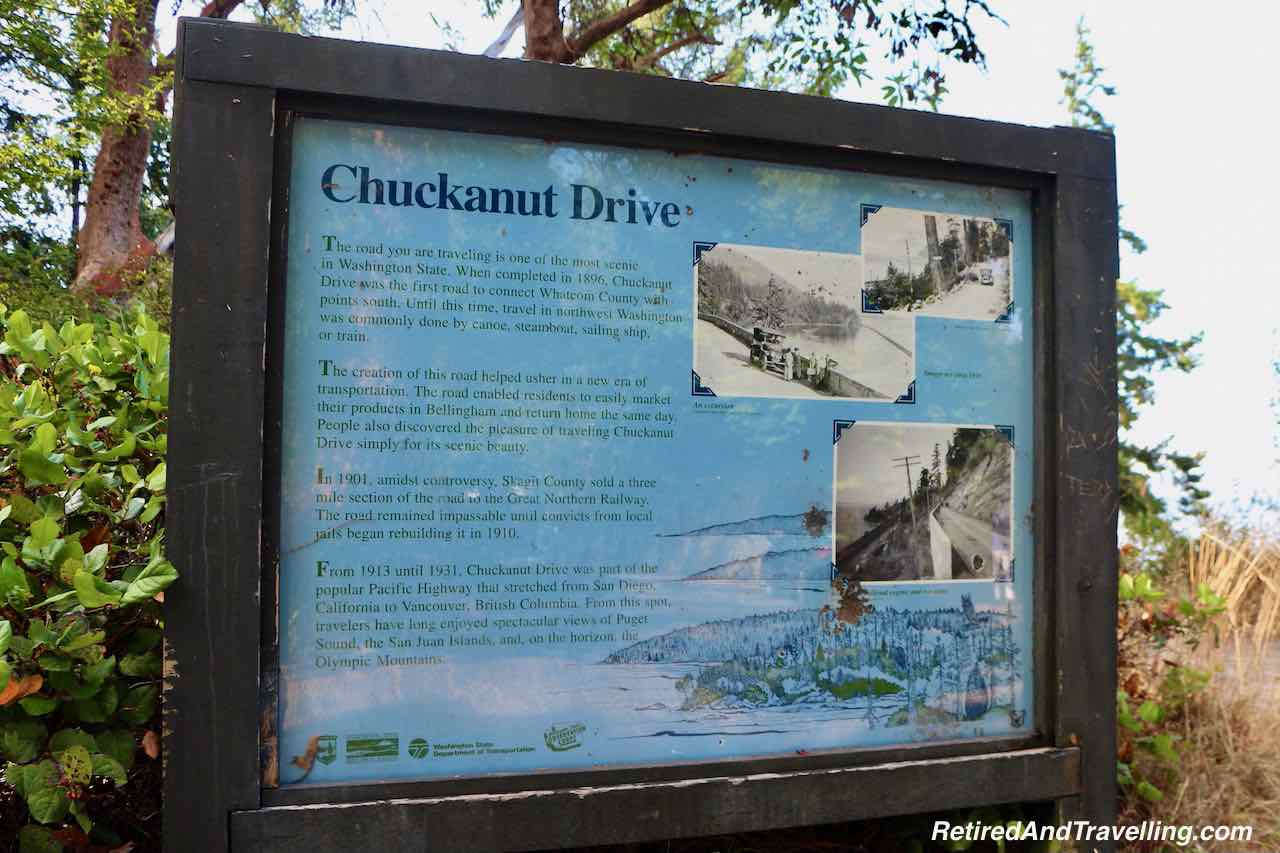 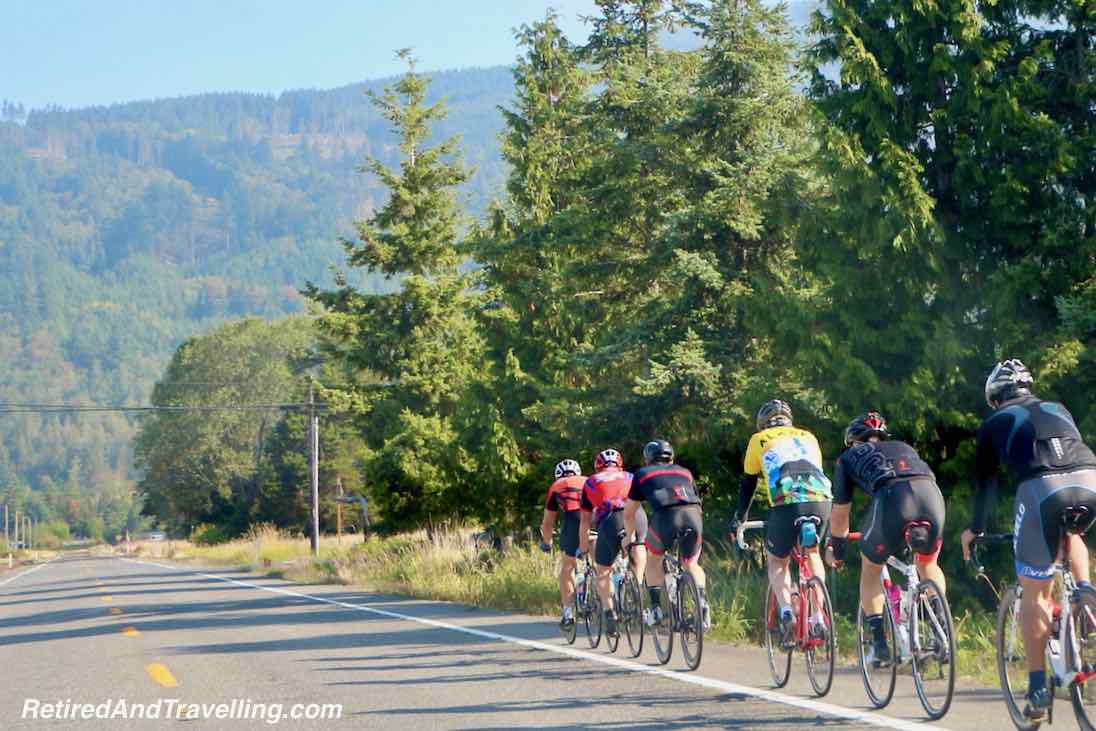 When we could pull off the narrow twisty roads, we were rewarded with our first views of the waters of the Pacific. 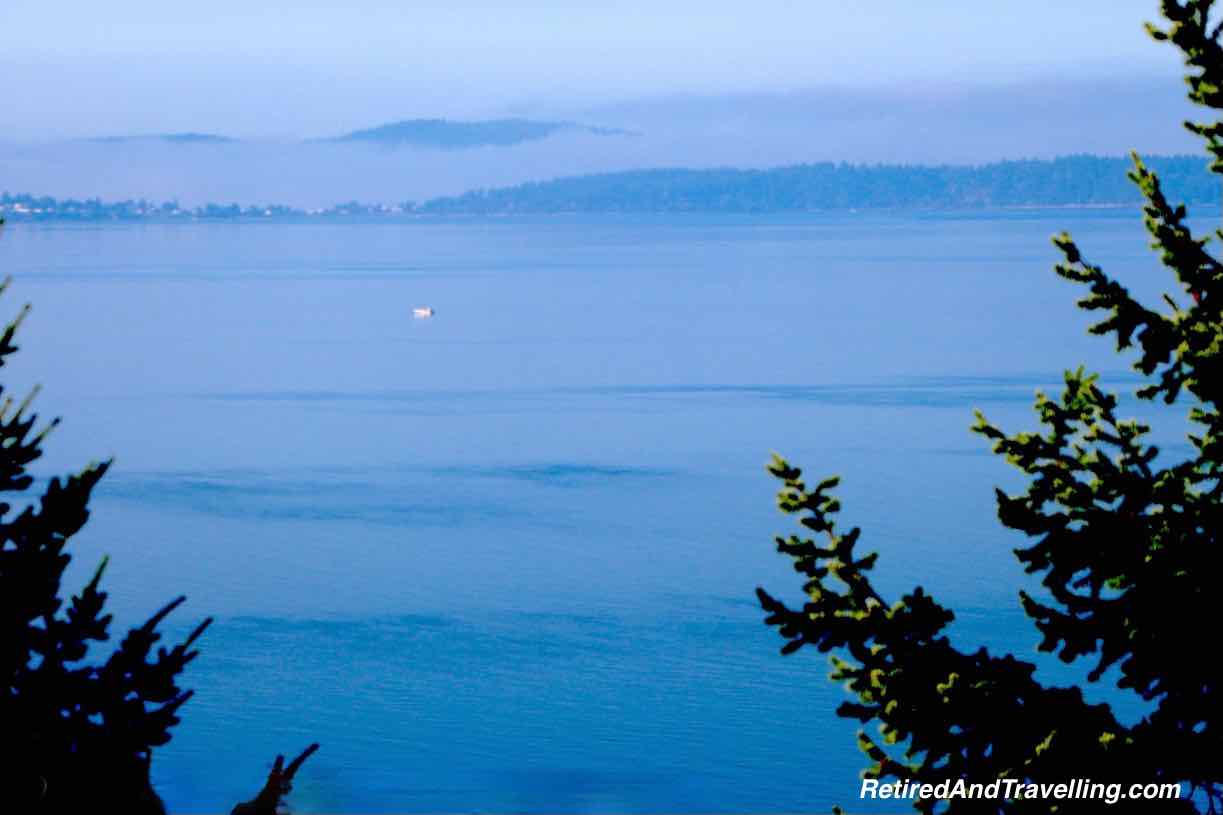 This detour let us discover the cute little seaside town of Fairhaven. With lots of options for a coffee shop or a return visit for food, we wandered around a bit before getting coffee.  Heading to the water, we knew we had finally made it to the west coast! 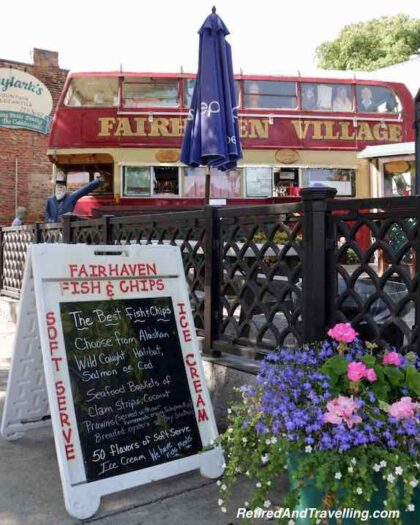 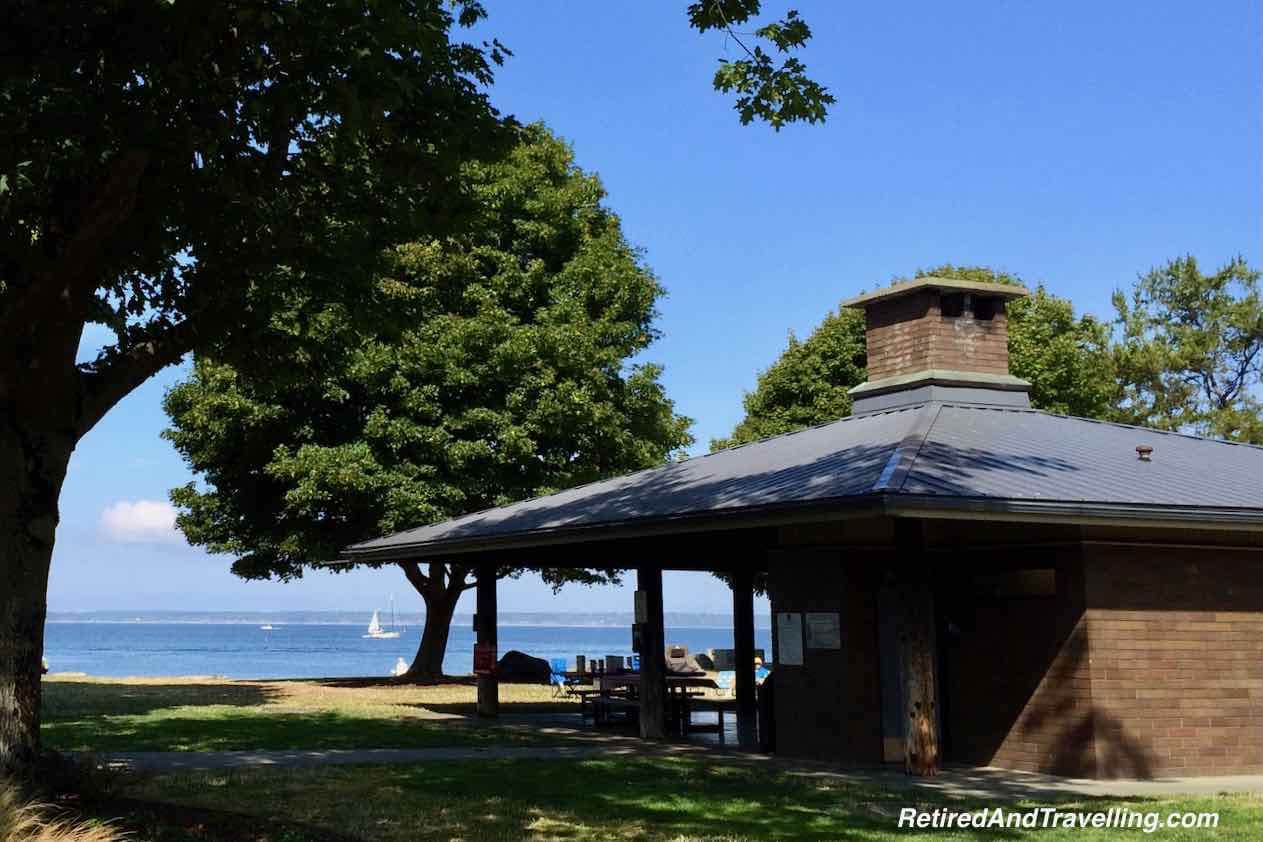 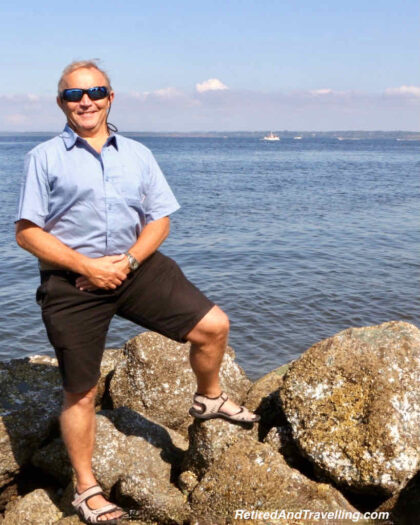 It was then a quick drive to the border. The border crossing was a little longer this time, mostly because as usual we picked the wrong line. Crossing into British Columbia, we stopped to chat with a women riding the green version of my Pedego e-bike! 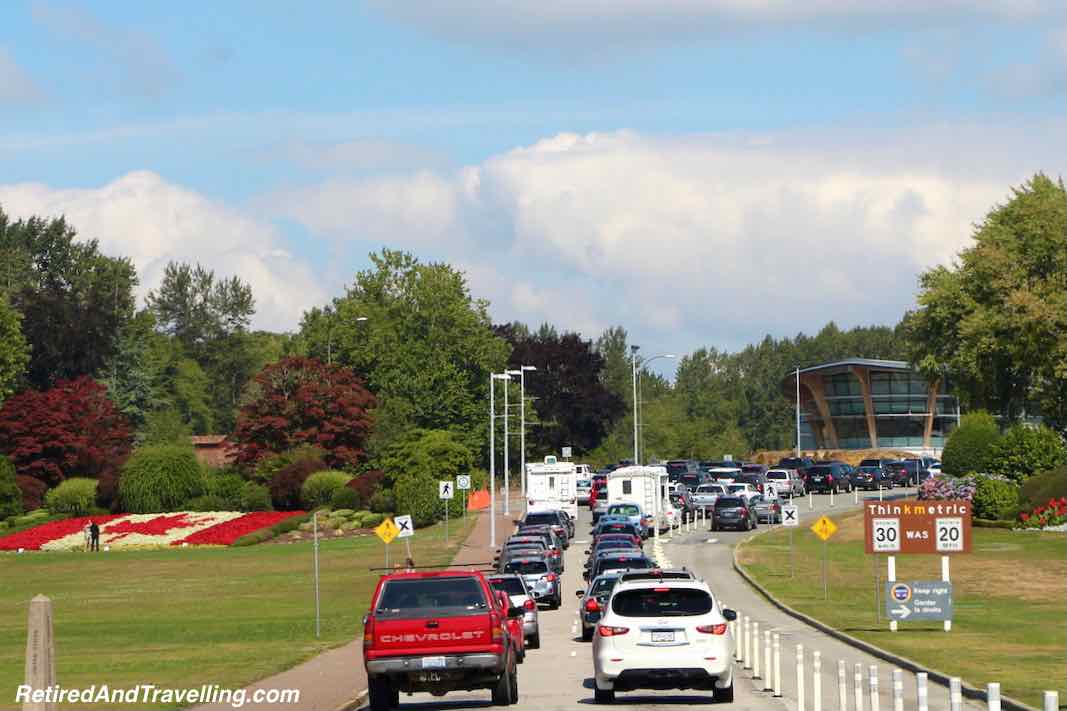 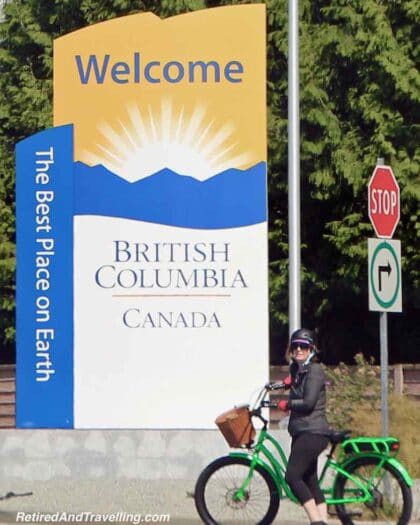 In Surrey, we were now on a well travelled path. White Rock for fish and chips at our favourite spot welcomed us to the west coast.

With the Airbnb condo programmed into the GPS, we navigated into Vancouver and found our temporary home. Our Airbnb host met us at the condo, helped us to store the bicycles we brought with us and showed us the great view we had from this great location on False Creek in Vancouver. 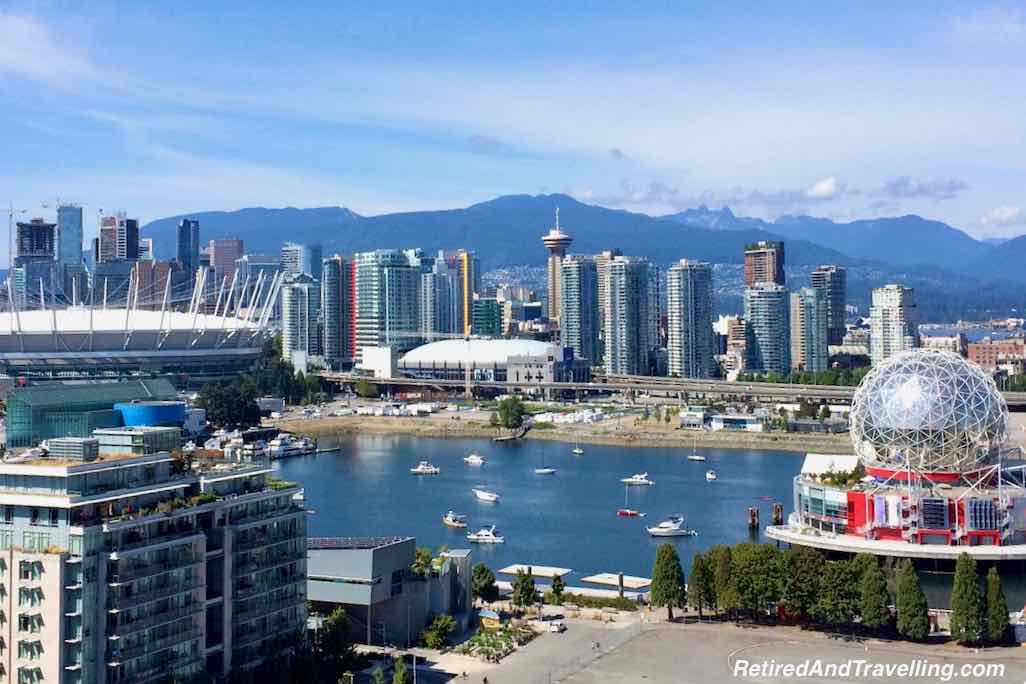 We Finished Our Trip With The Foothills To The West Coast

We had finished our cross country drive from Toronto to Vancouver. The midwest part of the trip offered us a view of almost limitless vistas across fields and the fertile heart of the U.S. Along the way we saw amazing scenery, saw displays of American pride and we stopped to visit a few spots. This last leg had taken us across the foothills and out to the Pacific coast.

We were now ready to settle in for our visit to Vancouver for a few months. While we had family commitments that brought us to Vancouver, we also had a long list of things on our “to do” list. We will share our adventures as we go!

Have you done a road trip across the country? Did you like crossing the foothills to the west coast? 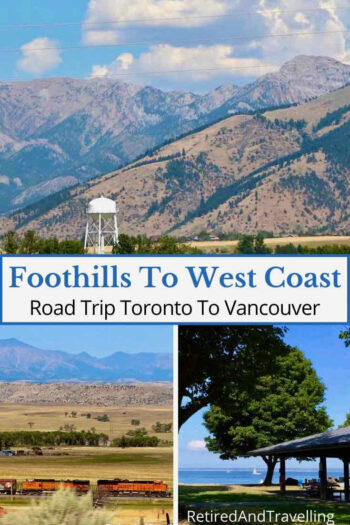 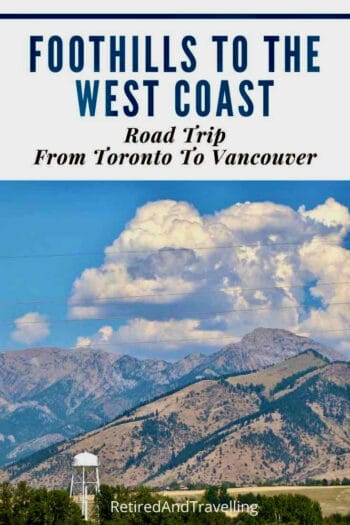 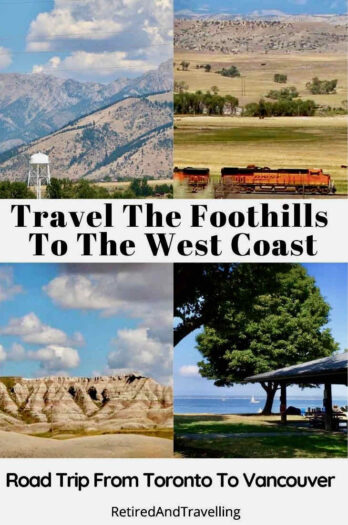 Find The Beaches at Newport Beach

Ocean Stop for the Beaches at Newport Beach For the next stop on our 4 week West Coast trip, we took the longest route possible to travel the hour trip from Santa Monica to the beaches […]

We would love if you could share this!
60
60
Shares

Colourful Albuquerque in the Fall – Hot Air Balloons and More

Albuquerque In the Fall Offers Natural Delights Albuquerque in the fall is a great place to visit. It is a city of natural contrasts and delights. You can travel in any direction and find mountains, […]

We would love if you could share this!
29
29
Shares

A Detour On The Way To Philadelphia We headed to Philadelphia for the July 4th holiday. But we stopped the first night by the lake in Geneva. Not Switzerland but upper New York state. We […]

We would love if you could share this!
75
75
Shares