SkyDiving – One Of The Things I Don’t Do Anymore

Given I am a travel blogger, you may be wondering if this blog will be about things we have seen and passed by. While that may be a good topic for a blog, this blog was sparked more by a final recognition that there are some things in my life that I will no longer do. While I hardly ever say “never” about things to do, there are some things over the years that I have had to say goodbye to.

This blog was sparked during one of our day trips to the Fraser Valley on our Vancouver visit when we went to Skydive Vancouver to watch the skydiving. I have done over 150 skydives. Yes, I jumped out of perfectly good planes until I got my private pilot license and then figured my passengers may not appreciate me flying with a parachute.

I started skydiving when I was 30+. We had a drop zone close to where we lived at the time and I was continually asked about trying to skydive until finally I signed up for first jump course. The training we took was not tandem (e.g. you get connected to an experienced skydiver) but rather we actually learned how to exit a plane at 3,500 feet altitude and deploy our own parachute. We practiced parachute landing falls to help with the landing and got a full 8 hours of training before we were set free to hang on the airplane strut and let go.

That first jump was an exhilarating experience. I fell off the strut into a good position, deployed my parachute as required and managed to find the drop zone under me and land on the property. My mother had come to that first jump, so when I landed at the far edge of the property in high weeds, she was not sure that I had actually landed safely. When I walked out of the weeds, I could almost hear her sigh of relief at my safety. Being a perfectionist, this less than perfect landing actually sparked me to try it again. I continued to skydive until on jump 13 I was certified ready to try free fall on my own (a higher altitude jump with a real free fall before deploying the parachute). I barfed my way through that entire day, figuring that this was all about nerves. Imagine my surprise when the next week I found myself pregnant with my first child.

As a newbie skydiver this was the end of my skydiving. While experienced skydivers often jump well into their pregnancies, with my lack of real experience and skill, I was not putting my child at risk. Within six months after my son was born, I was again ready to re-start skydiving. This time I did not want to go through the slow process of learning and decided to do Advanced Free Fall Training (AFF). In this method you started jumping at very high altitudes (about 9,500 feet) with two instructors and you get a much more condensed but intense learning experience. By the end of 7 jumps I was certified for free fall and could jump solo from these higher altitudes.

Over the next 4 years I accumulated 150 jumps. While most of them were in Canada, we did take several trips to the U.S. including one trip where I broke my ankle because I mis-judged my landing. I had never really been obsessed about dying from skydiving but I was always worried about breaking bones. I would not recommend breaking a bone but it was not the disaster I had thought it would be.

Ultimately I stopped skydiving. In Ontario in Canada the season is very short. I was tired of spending every weekend at the drop zone, watching for low winds and clear skies. When I realized I had not been to the beach in years, I sold my skydiving gear and retired from this spot.

My son is now 22 and he has always wanted to skydive. He keeps asking if I am going to jump with him. Despite an active career as a navy diver, David has never gone skydiving and it was on his “list”. Was I still up to trying this again? My training was all stale and it would mean either a tandem jump or retraining.

On a beautiful sunny day in September we headed to Abbotsford, west of Vancouver, to the skydiving field for Skydive Vancouver. We were not going to skydive but rather to check out the facility and just to see it in action. Skydive Vancouver has a great facility and on this sunny day (after a week of rain), the place was packed with new students dressed in their colourful jumpsuits, with harnesses but NO parachutes, all there to do their tandem skydives. 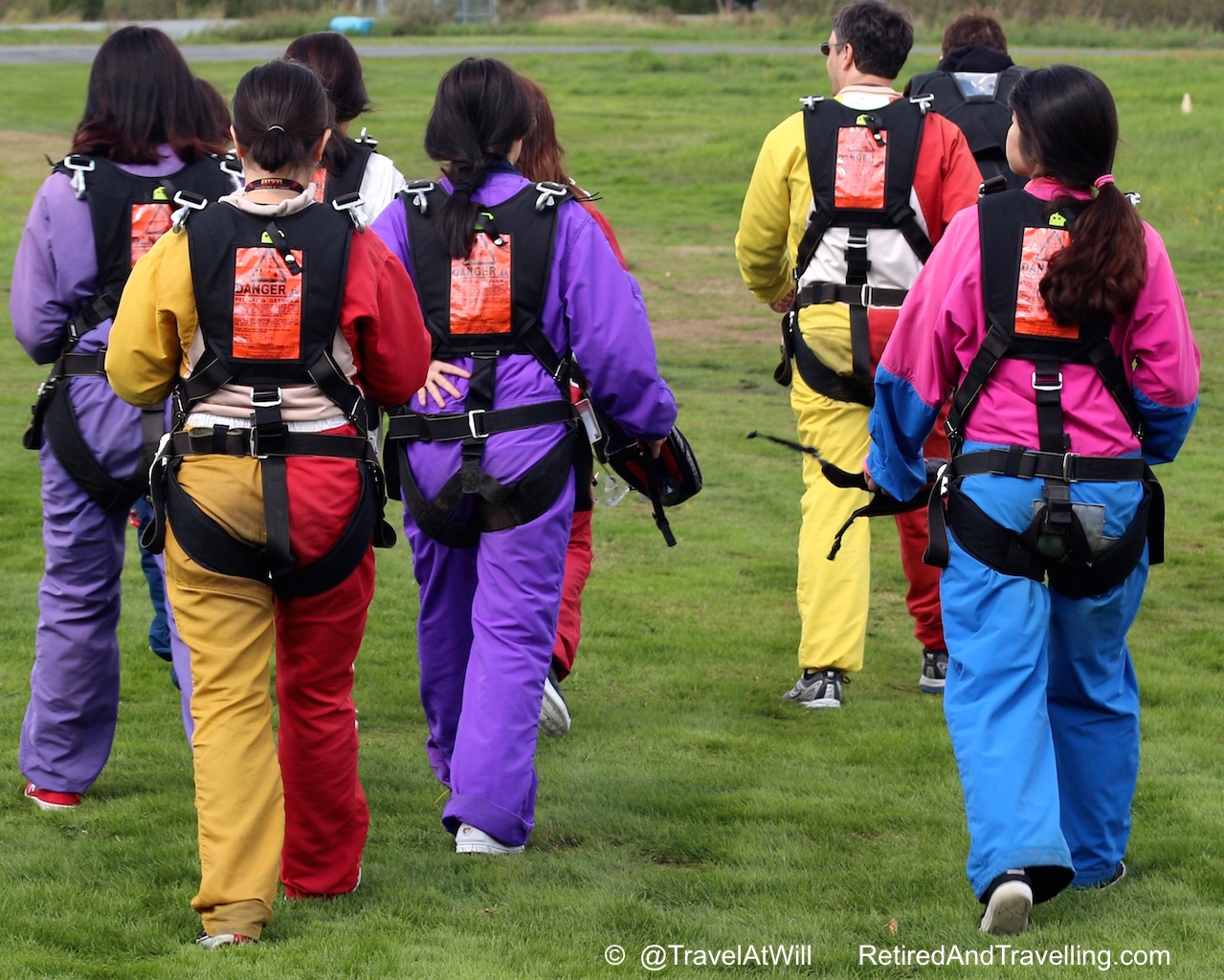 As we pulled up, there was a load of parachutes just coming down. We pulled up a bench and watched them drift in. It was amazing how quickly it all came back to me. I could almost feel the wind whipping in my face in the open door of the airplane. I could still remember that gulp as I stood in the door, still questioning after 150 jumps what I was doing. The rush of free fall and the absolute quiet of flying under the parachute are feelings that easily came back. 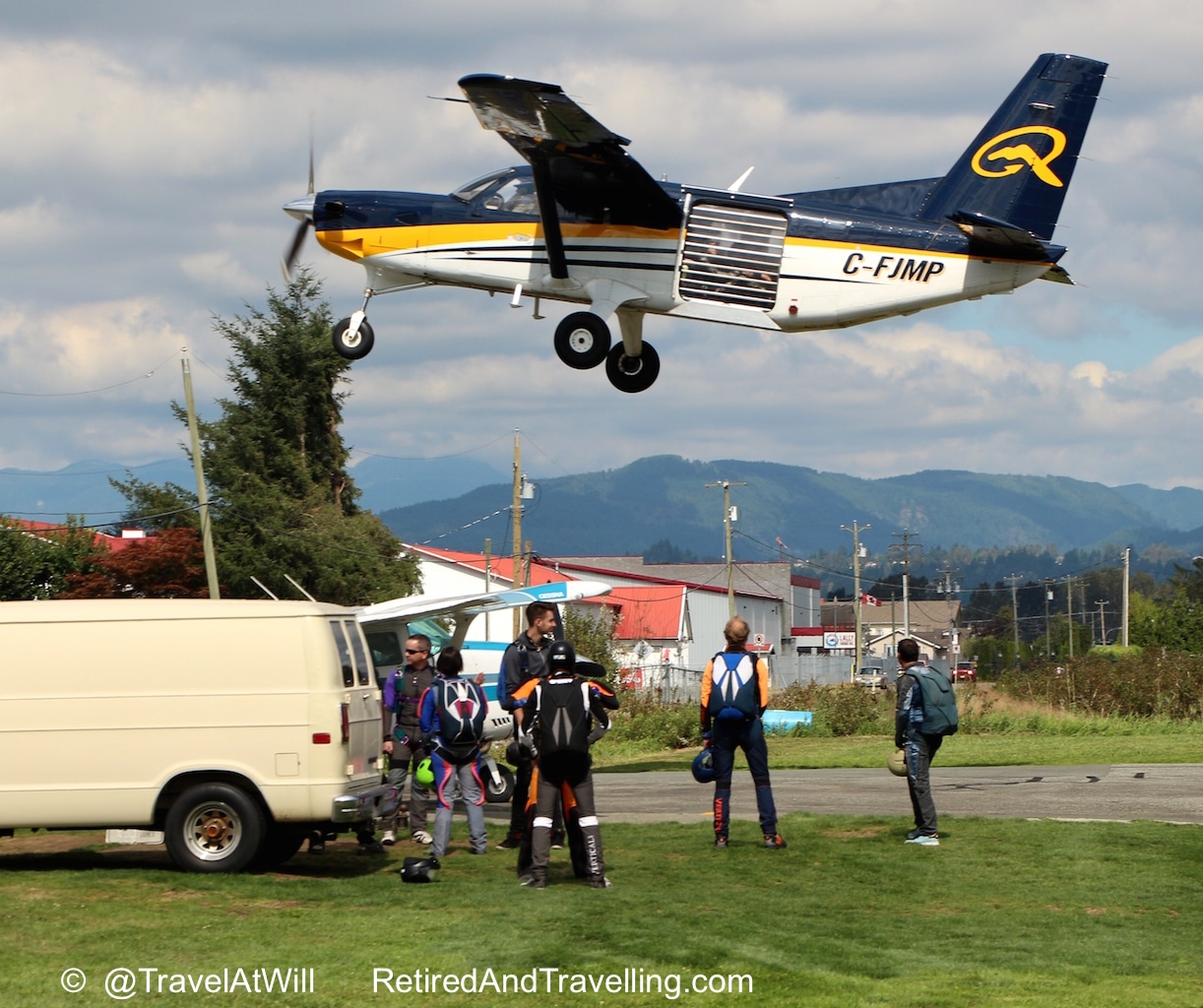 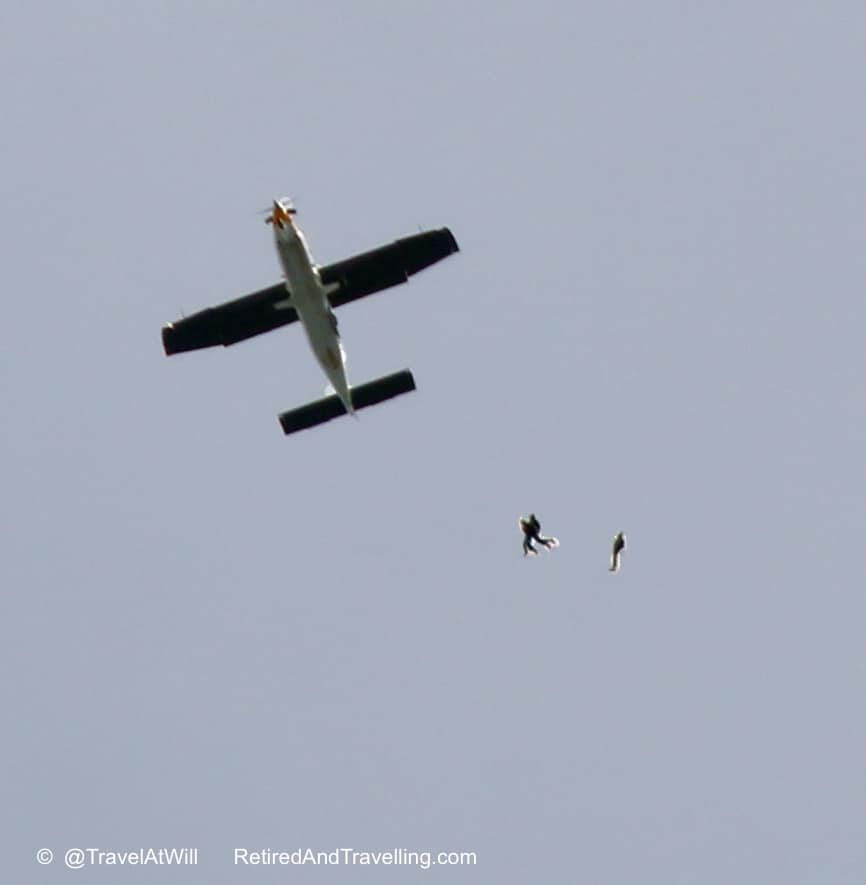 As the jumpers made their final manoeuvres to get them in position to land, I remembered that thought process. How far would the wind take you if you turned and rode with the wind? How far would you fly once you turned back into the wind? Where was I targeting to land? There was enough wind on this day so that most of the jumpers landed with a soft walk out. 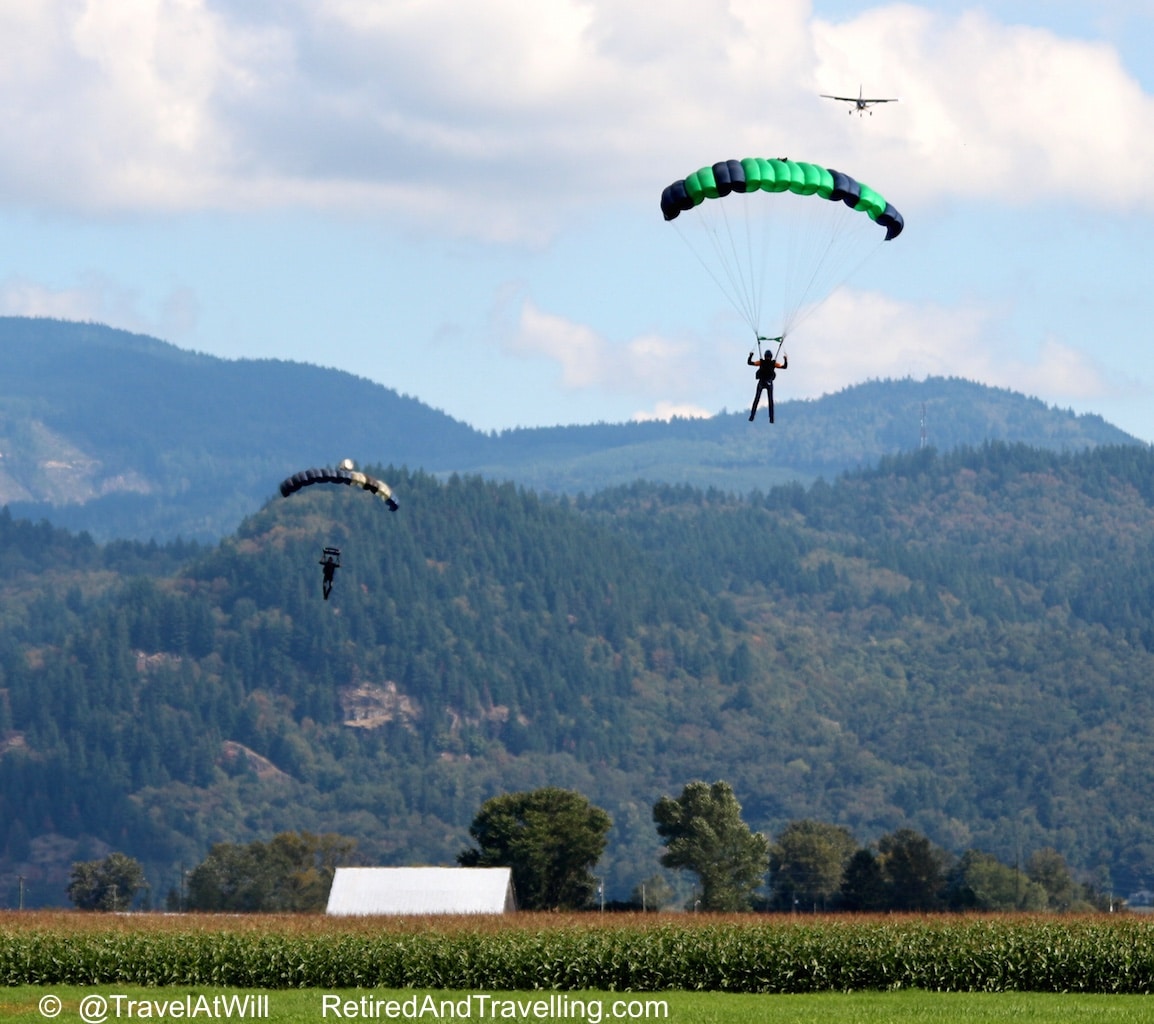 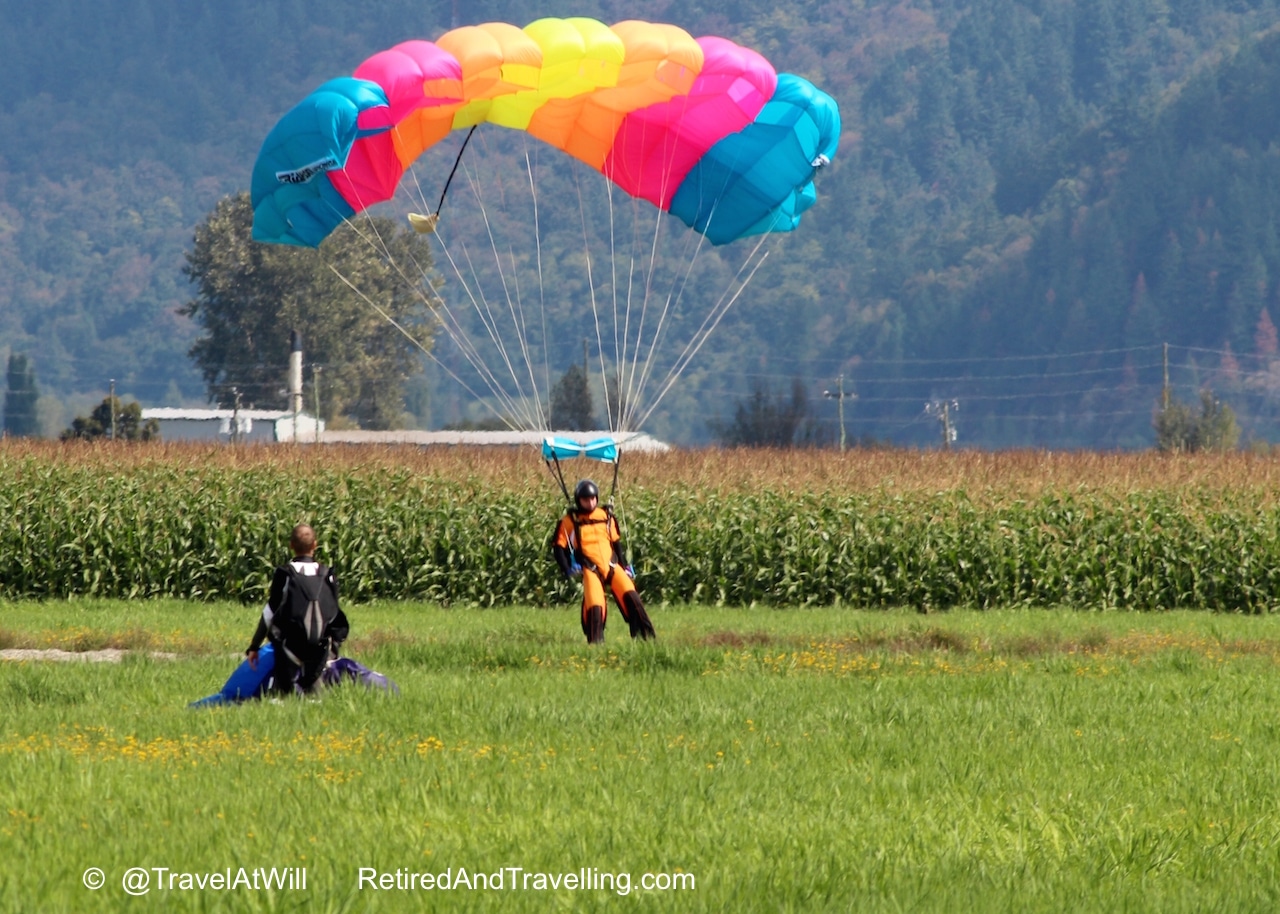 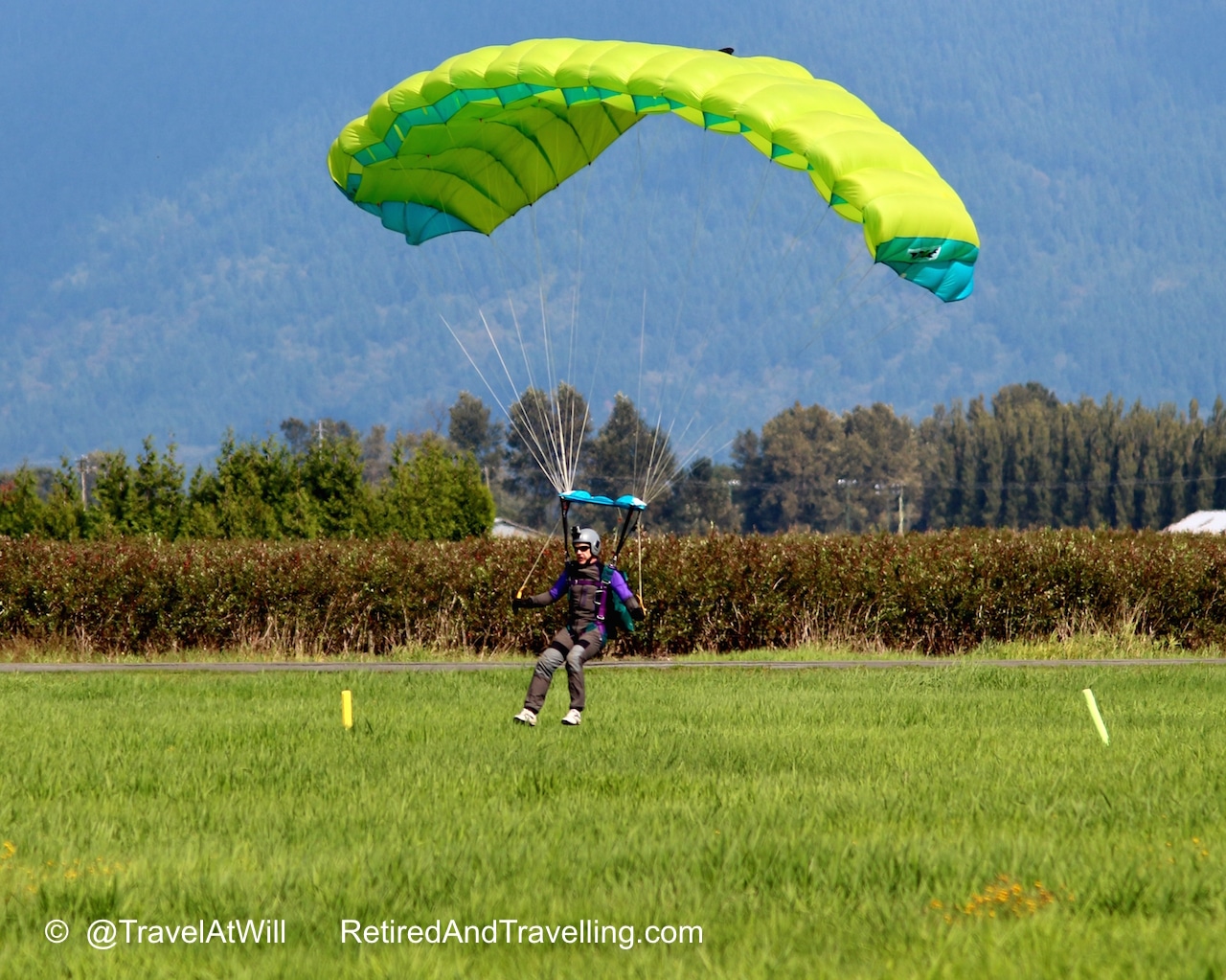 We wandered around for awhile. We watched the students watch their friends jump and then get final briefings on their tandem skydive experience. A few friends or family watched on perhaps with the same horror that my mother felt when I did my first jump. 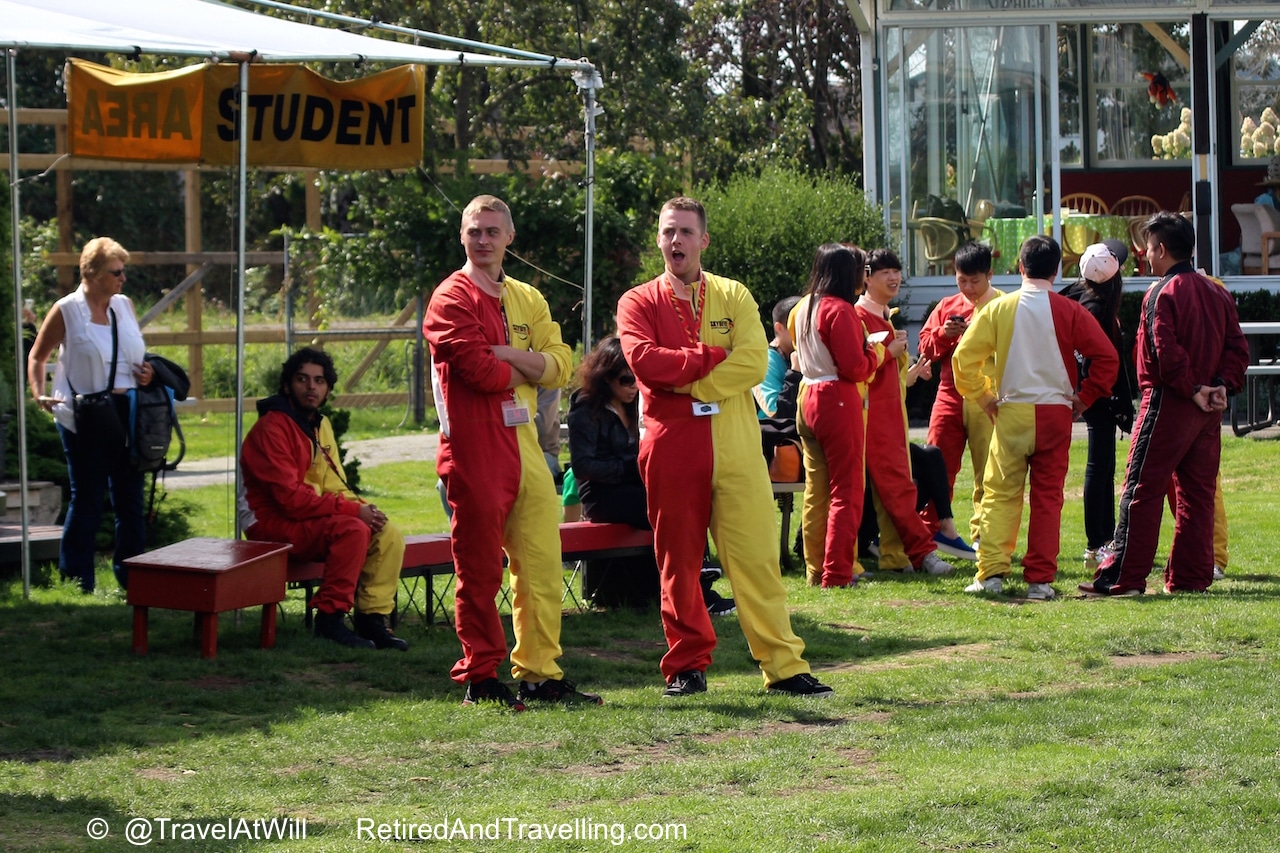 I remember the adrenaline high you could get from being around new jumpers. How many did I see land, kiss the ground, tell me it was the most amazing thing they had every done and then promptly said “Never again!”. Most people who try skydiving do it once to tick it off the list and then move on to the next thing. But it is something that most never forget. 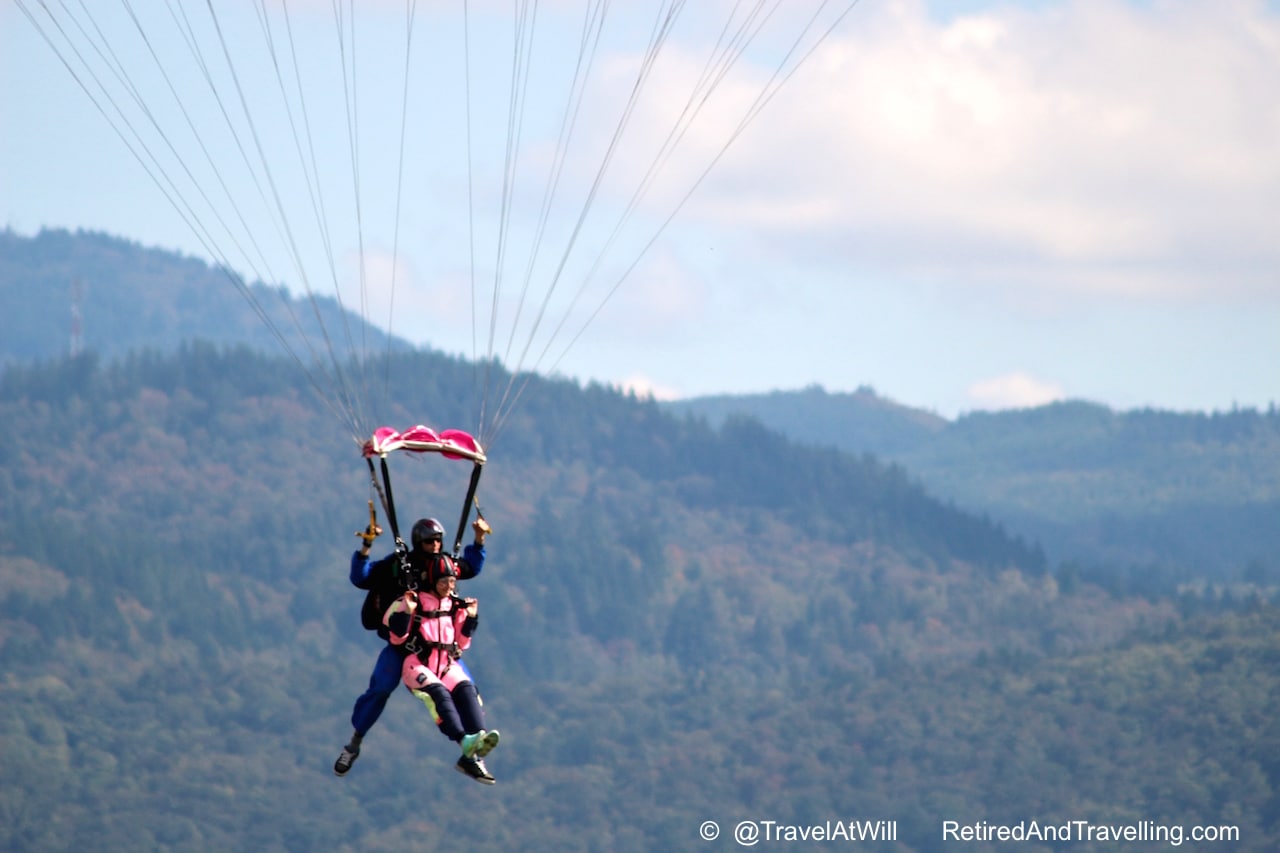 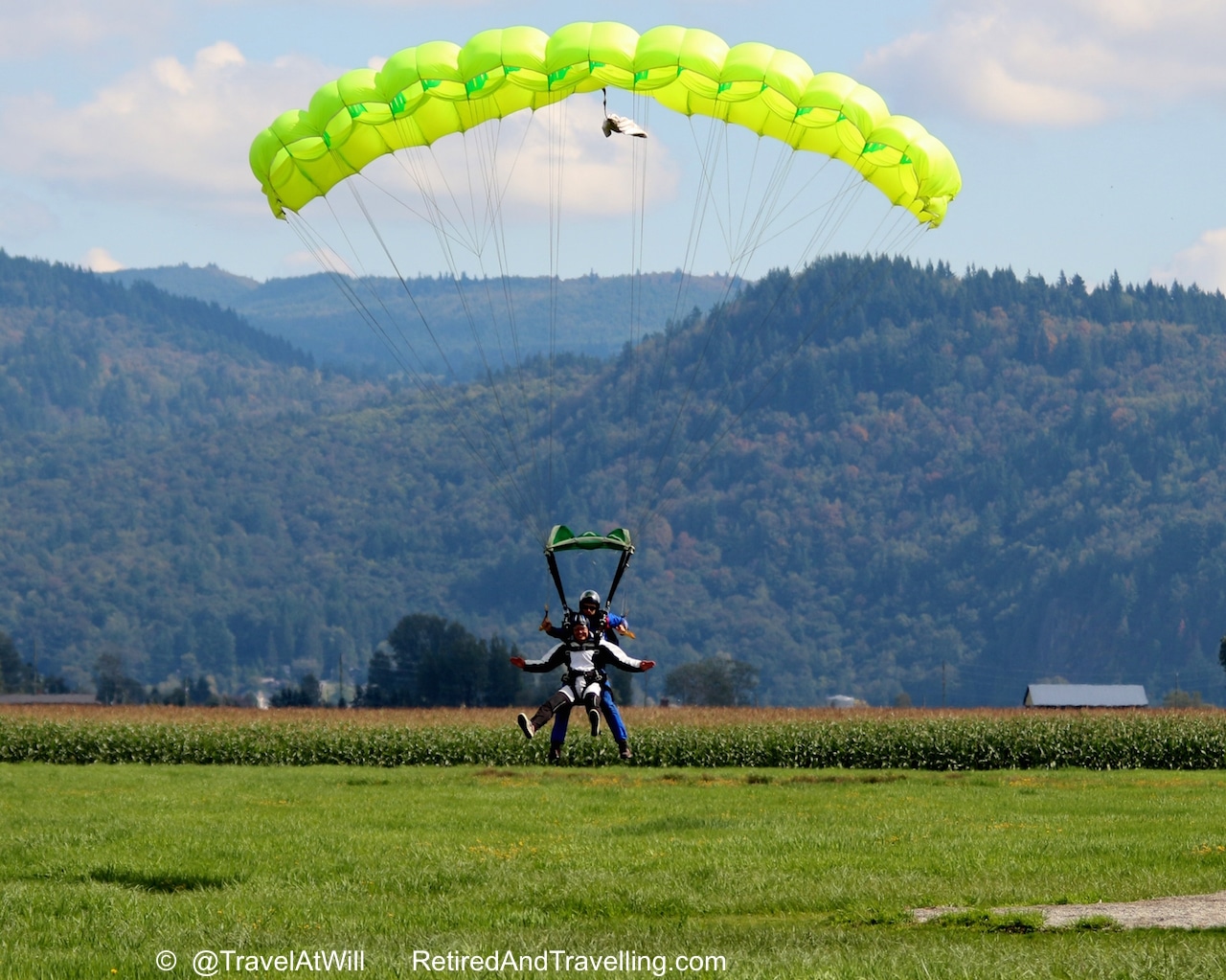 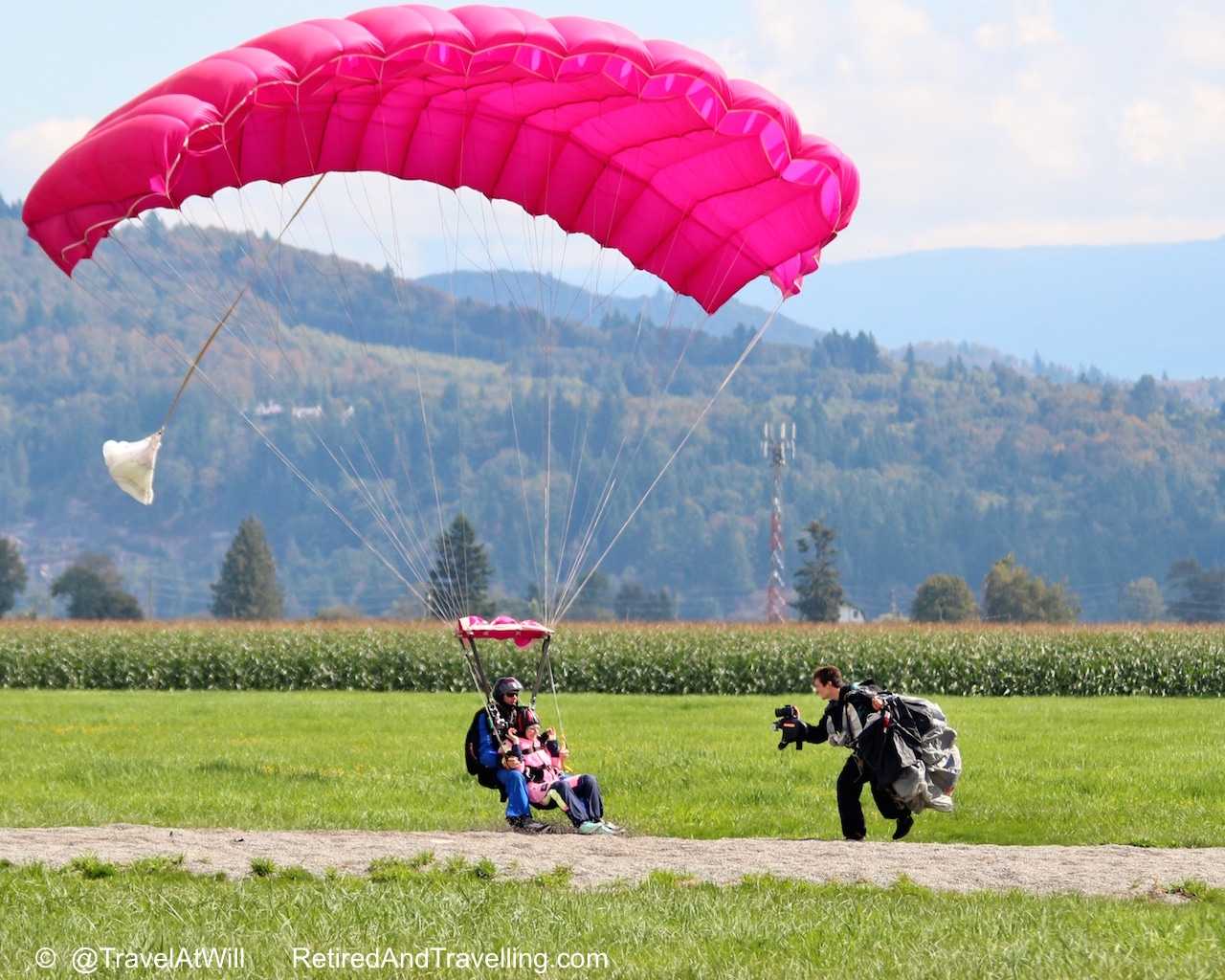 Skydive Vancouver has a very large indoor packing floor. I watched as the parachutes were continuously packed to ready the instructors and videographers for the next plane full of jumpers. I wondered if I still remembered the intricate process of how to pack a parachute for the perfect opening. 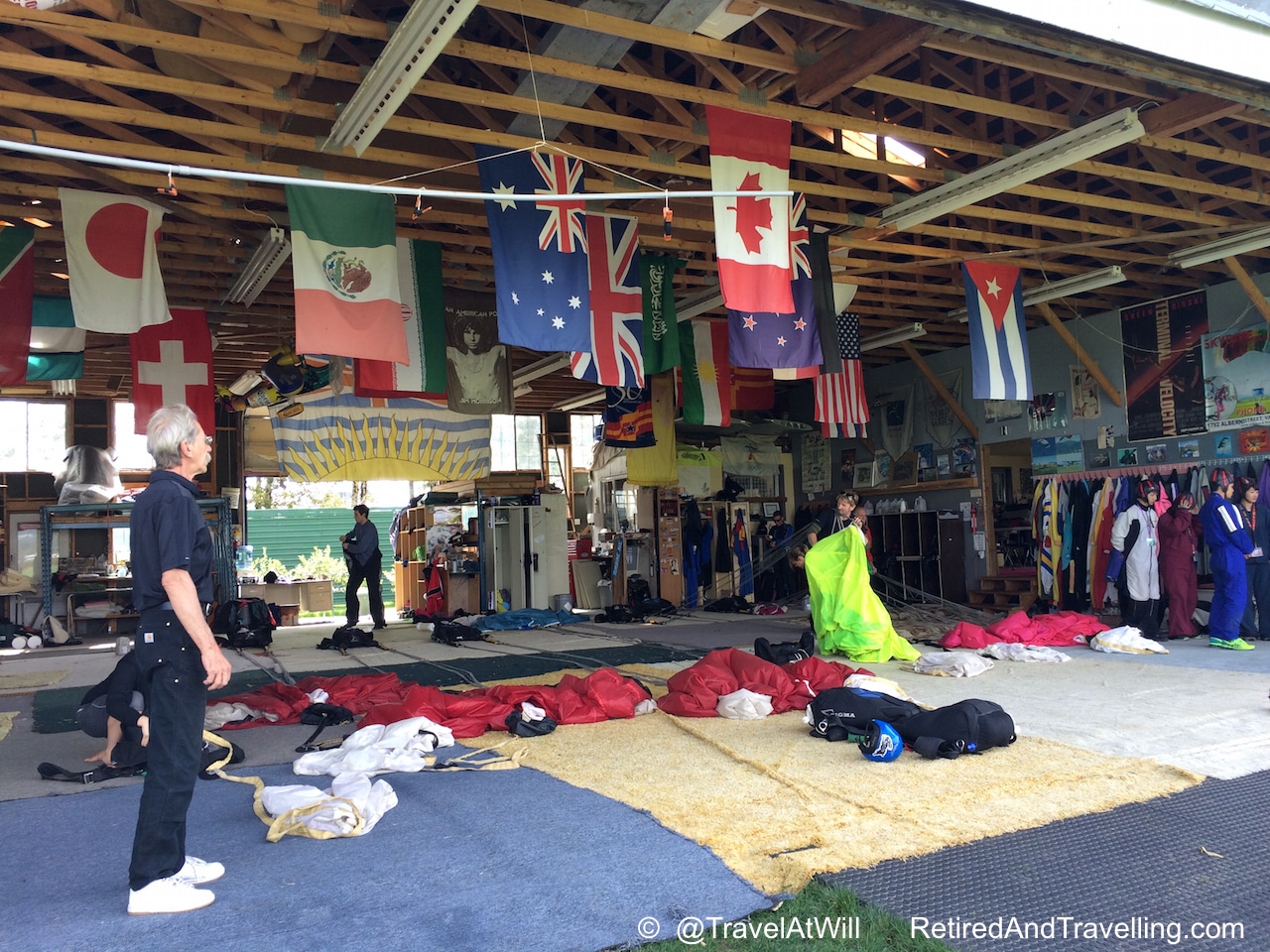 We spent a few hours at the drop zone watching the skydivers move to the plane, the plane circling overhead until we heard the engine noise drop signalling jumpers were going out, the more experienced jumpers in their free fall routines and then the parachute moves to get them to the ground. It brought back great, very visceral memories. David had to drag me away.

But however entranced I was in watching the skydiving that day, I came away with a firm decision that I would not be trying skydiving again. I will come and watch my family members try it and suck in their adrenaline, but for me, this will remain a thing of the past – in my personal rear mirror. A bit sad to say goodbye to but something that conjures up a great sense of accomplishment at having done 150 jumps but no desire to re-create that.

This is not the first time in my life that I have had to put something in the past. As a kid I had always wanted to be an astronaut. My math and sciences mind led me to study engineering in university and then to be an early adopter in computer technologies. I never seriously looked at astronaut training but I guess it was always sitting as a “could have” in my mind. And then one day I went to a business lunch where Roberta Bondar the Canadian astronaut was a speaker. I sat enthralled as I heard her talk about being in space as her pictures scrolled behind her. I could almost feel how awesome it would be to look at Earth far, far away. But that night when I got home, I had a most sobering thought. I was never going to be an astronaut and that desire got put in my past. I still occasionally think about splurging on a flight to space, but we will see.

I am sure as we move forward and slowly age, there will be other things that will be put behind me. I sure hope that I leave them with the same strong memories that my trip to the skydiving field did that day!

What things have you put securely in your past? Have you tried skydiving after giving it up for awhile? Anything else that you re-kindled? Can you live off the memories for some things?

A Relaxing Stay At The Westin Bayshore Vancouver

Day Trip Along The Sunshine Coast In BC

A Great Day On The Sunshine Coast In BC There were so many great day trips to take when we visited the Vancouver area on a road trip around BC. It was an easy ferry […]