Bologna and Food – The Fat City in Emilia Romagna

On this day during our week in Bologna, we celebrated Bologna the Fat City.  Bologna is known for 3 things, as the:

Heading Off For A Food Tour

We were prepared for a 6:50am pickup for our Italian Days Food Tour and were happy when our departure time got moved to 7:50. We got a simple breakfast in before we headed out for our long day. There were a number of food tours offered in the Bologna region and we picked the top rated one.  Although, we were admittedly swayed by the TripAdvisor comments about the wonderful experience created by the owner Alessandro. Unfortunately Alessandro was not available on the day we went.  But we still got a good tour of 3 food factories (Parmigiano-Reggiano, Aceto Balsamico and Prosciutto).  But just a little less additional insight or entertainment. Alessandro and his colleague Barbara very quickly responded to our concerns and exceeded our expectations in addressing our feedback. This is how great customer satisfaction is harvested! We absolutely would go back and do this tour again with Alessandro!

On the transit to our first stop, we learned a little about the foods that Bologna is famous for – tortellini, lasagna, tagliatelle, mortadella, rice cake and of course, Bolognese sauce (never put on spaghetti but always on the fatter tagliatelle noodle). We were told that tortellini was created to mimic Venus’ navel.  And that you knew that the tortellini were the right size if you could fit 8 uncooked in a table spoon. That piece of trivia explains why the huge, tough tortellini we get at home were generally so unappetizing.  This was a great start for learning about Bologna the Fat City!

The Making of Parmigiano-Reggiano

Parmigiano-Reggiano can only be officially produced in the small region we visited. Not only must it be produced in the region.  But it must also be produced in a certified factory and be tested once it has aged. Arriving at the “4 Madonna” cheese factory we were first marshalled in to don our Italian fashion gear.  This included a complete blue paper dress with matching booties and hats. 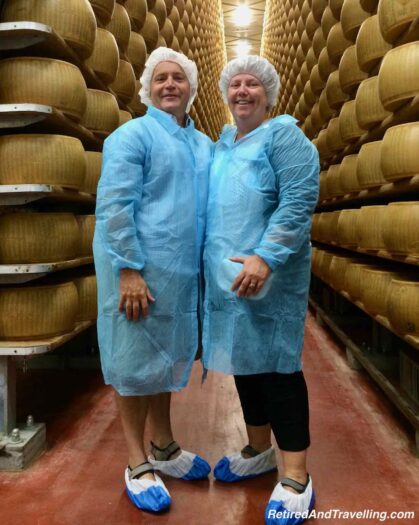 This allowed us to walk through most of the production process behind glass set up for great visibility. Our guide walked us through the whole process.  The tour went from the initial heating process where the big ball of cheese was first built, then cut in two and swaddled before it was put on a conveyer belt and moved to put into a mould. 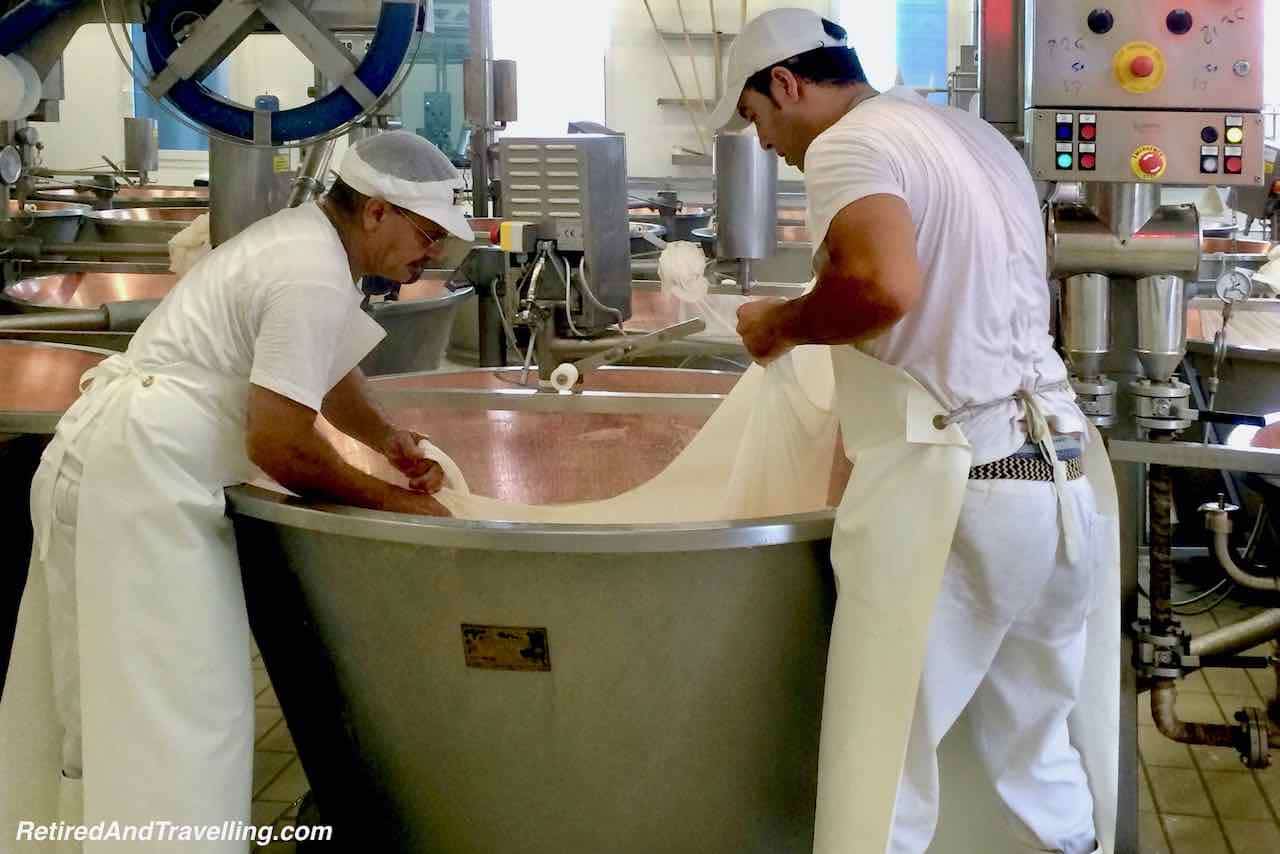 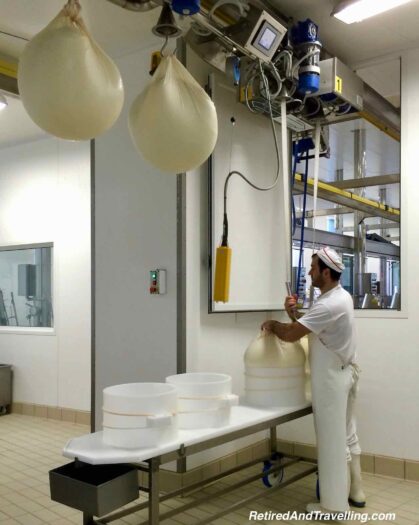 Once in the mould, the ball was turned over regularly to flatten the ends and much of the water was drained off. The pucks were then wrapped with the wax-like outer ring and turned some more for a period to continue to age and “rest”. 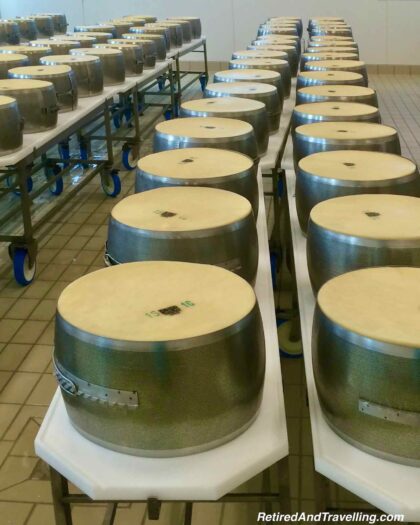 The cheese pucks moved to further spa treatments – a water bath and then a heat treatment. They were finally then stored in massive shelving where they got tested and marked for quality. 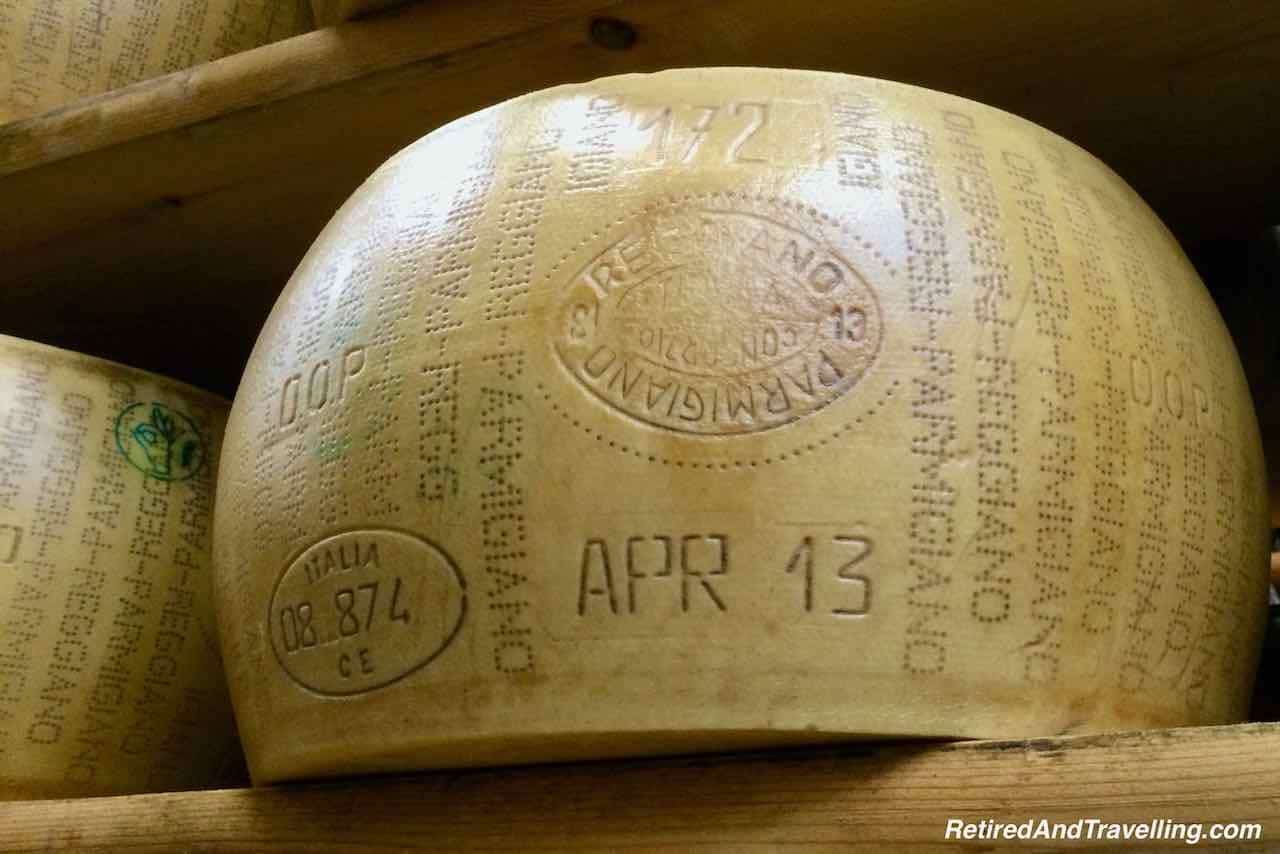 This plant was an interesting mix of shiny new equipment with considerable manual labour for moving the cheese balls, for turning the pucks and for cutting and packaging. The whole factory ran with 10 employees. The factory had suffered two earthquakes and had been re-built. They saved the cheese after the first earthquake.  But lost it all in the quake that followed (1.5million€ loss). The new plant was designed to better withstand the next disaster.

No food factory tour was complete without a tasting. We sampled the commercial grade Parmigiano-Reggiano (a softer, milder cheese) right up to the 30+ month brand. The 22 month brand seemed to be the best for us.  It offered a sharp, dry taste that was not too strong for our wimpy pallets. We left with a couple of vacuum packages of the two ages we liked – paying 8€ for Parmigiano-Reggiano we would have paid triple for at home. This was picnic food for a few days.

The Making of Aceto Balsamico

We headed from there into the hills above Modena to a small family run place.  Villa San Donnino made Aceto Balsamico for generations. Unfortunately, we arrived with another group.  So instead of getting the tour from the local shop guide, our tour guide walked us through, reading from her plastic coated notes as we went. We didn’t see any real production, other than how the Aceto Balsamico was moved from barrel to barrel after it has finished an initial heating process. It was interesting to see the aging barrels in the attic.  This was the way this farm produced Aceto Balsamico since the beginning. 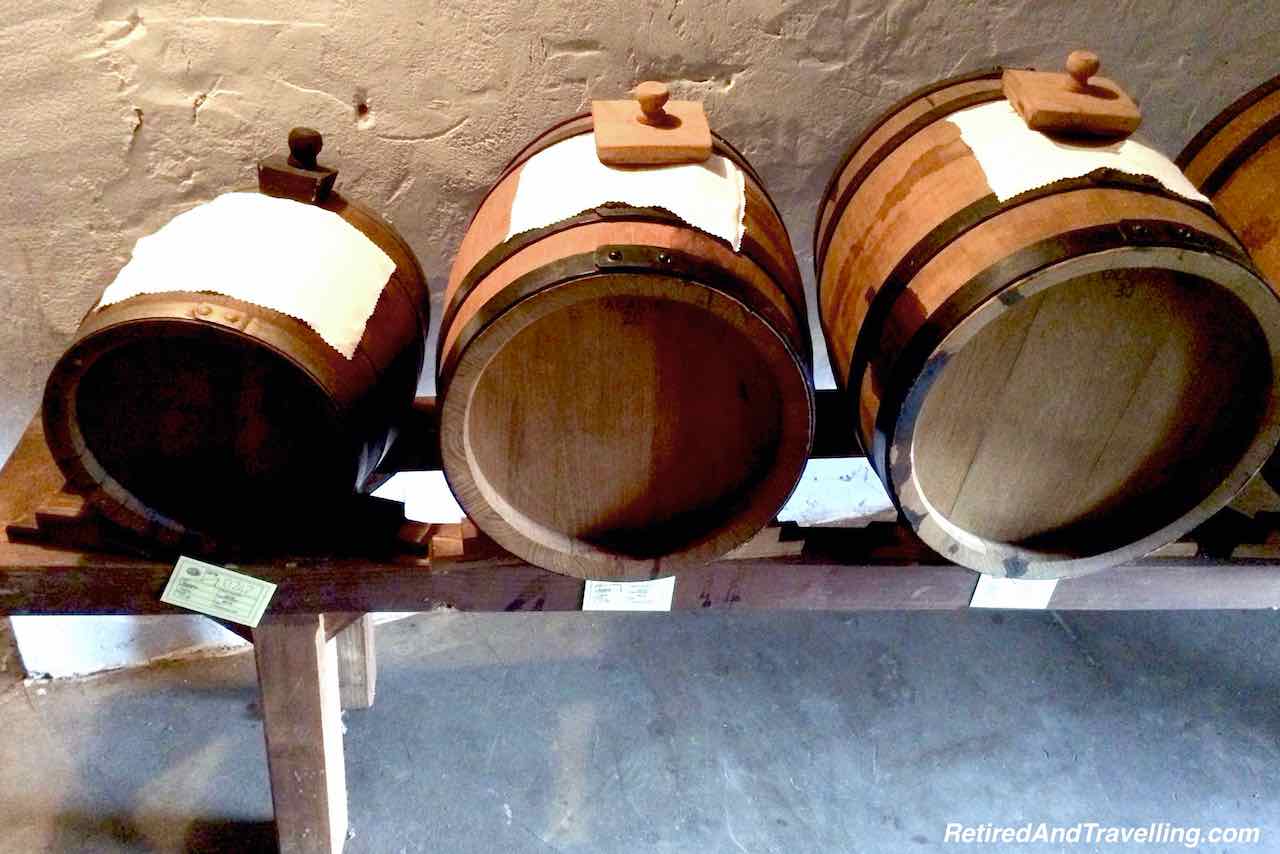 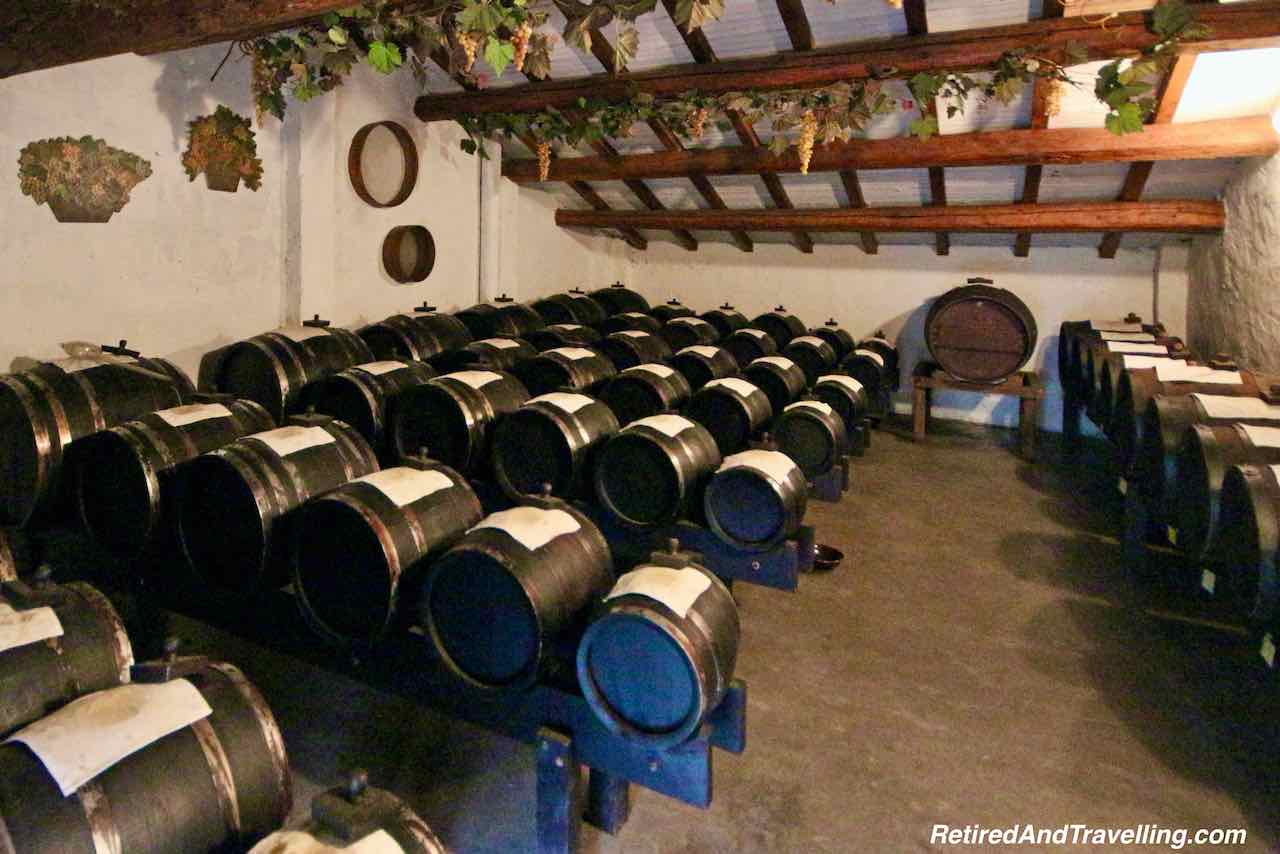 We were introduced to a cute local custom whereby a barrel of Aceto Balsamico was started on the birth of a daughter.  The barrel was then ready (after at least 12 years).  It formed part of the dowry for the girl. We saw several casks marked as such with girls names.

We tasted a range of vintages of Aceto Balsamico – from grocery store level though to the extra special aged brand.  It got  thicker and sweeter with each aging. The jam we were served could be used on bread, ricotta cheese or with meat. We had one served on ice cream, but unfortunately they used the low grade brand which really was not what is generally used for a dessert. It was disappointing at how little we learned at this stop.  It was a good thing that we already knew what a treat that well aged Aceto Balsamico was! This visit would not have sold us and with no discounts on store prices, we were not tempted to buy anything.

A Country Stop For Lunch

By the time we stopped for a country lunch at about 12:30, we were happy that we had eaten a small breakfast before pickup. The restaurant was up in the hills and it was still mild enough to sit outside in the afternoon. 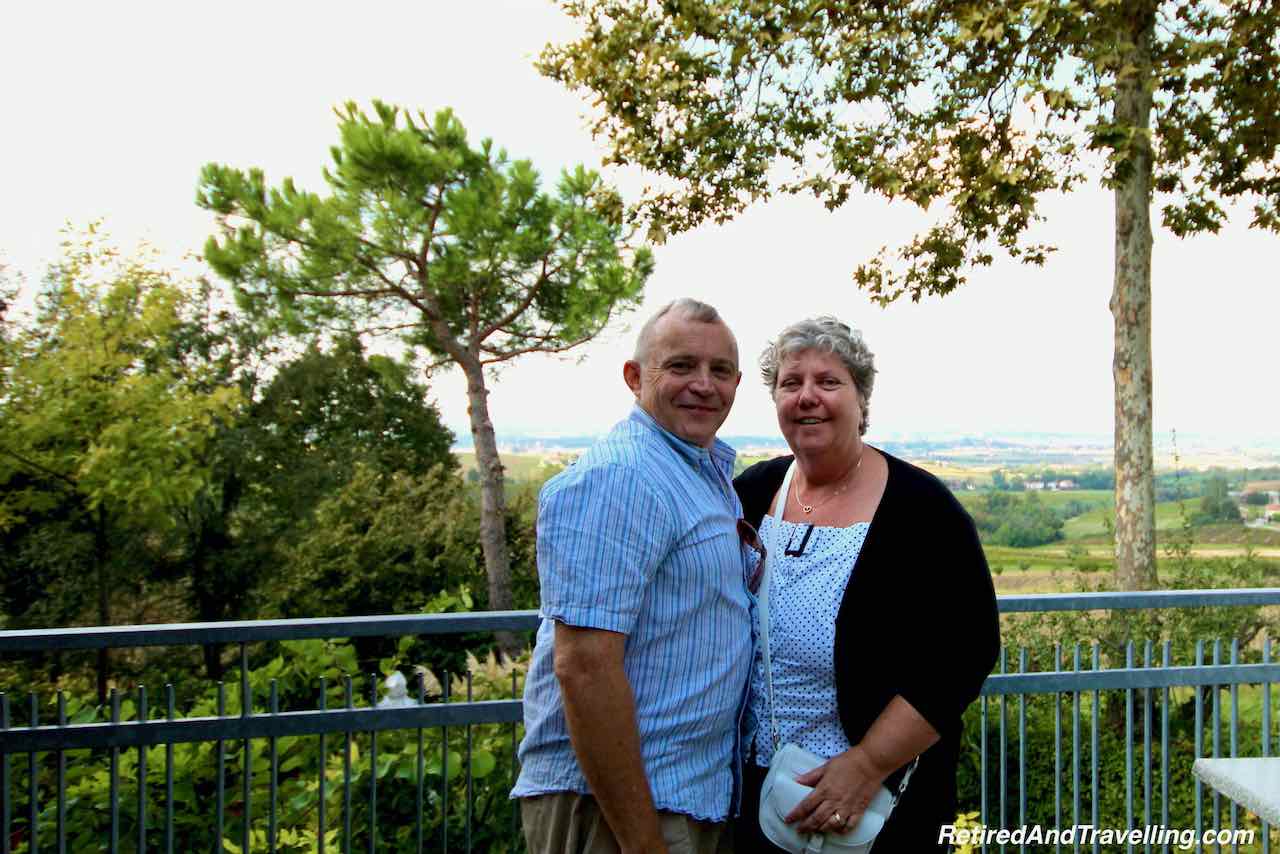 The online reviews and our confirmation email raved about how much food and wine we would consume.  They suggested stretchy pants. We found the food generally good and we got a good variety of local foods.  But maybe we just didn’t eat like pigs. We sampled things to pace ourself and left full but not engorged. We got only one sample of local sparkling wine.  So we left quite sober and without much of a view of wine of this region. Luckily we had good company from our fellow tourists and we enjoyed the camaraderie for several hours over lunch.

The Making of Prosciutto

Gathering us back up, we wandered further into the hills to our next stop. There was a tour in progress and our guide wisely took us for a short walk to wait for our turn.

This ham factory (“Nin Gianfranco Prosciuttifico”) was run by the family. We got a good tour from the daughter in quite expansive Italian, with the translation from our guide of the key points being made. The factory had been designed to mimic the original conditions used for curing and aging prosciutto. The pig back legs arrived at the factory (luckily we missed this sight).  And the initial processes to salt, drain and initially cure the legs were done at “winter” temperatures on the main floor. 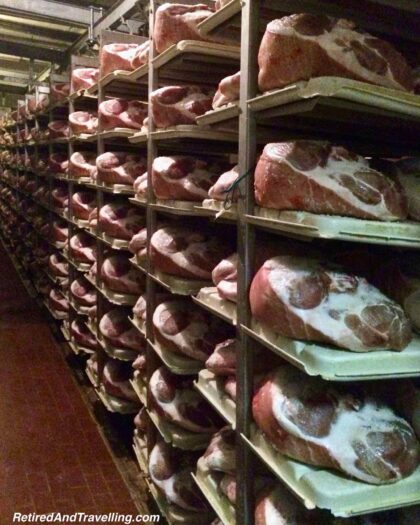 The ham was then moved upstairs where open meat was covered with a lard to protect it.  And then it was hung to age at “spring” temperatures. 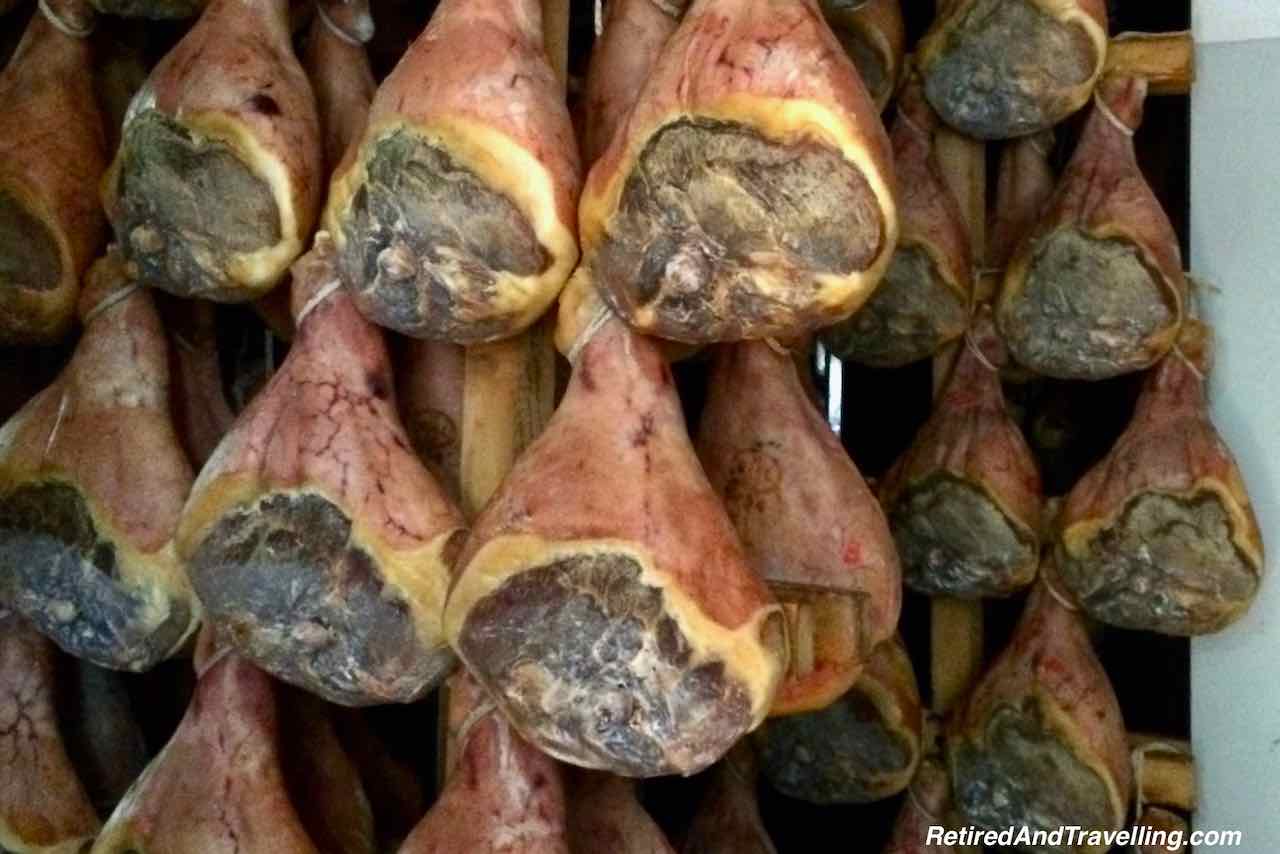 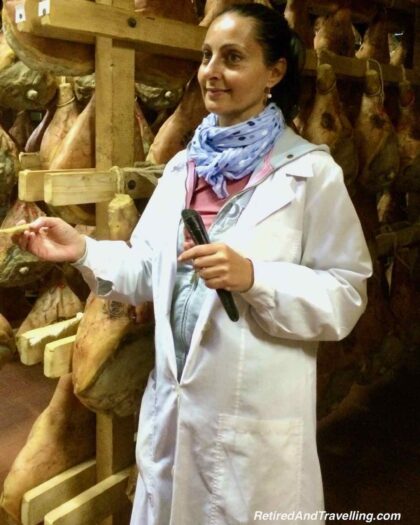 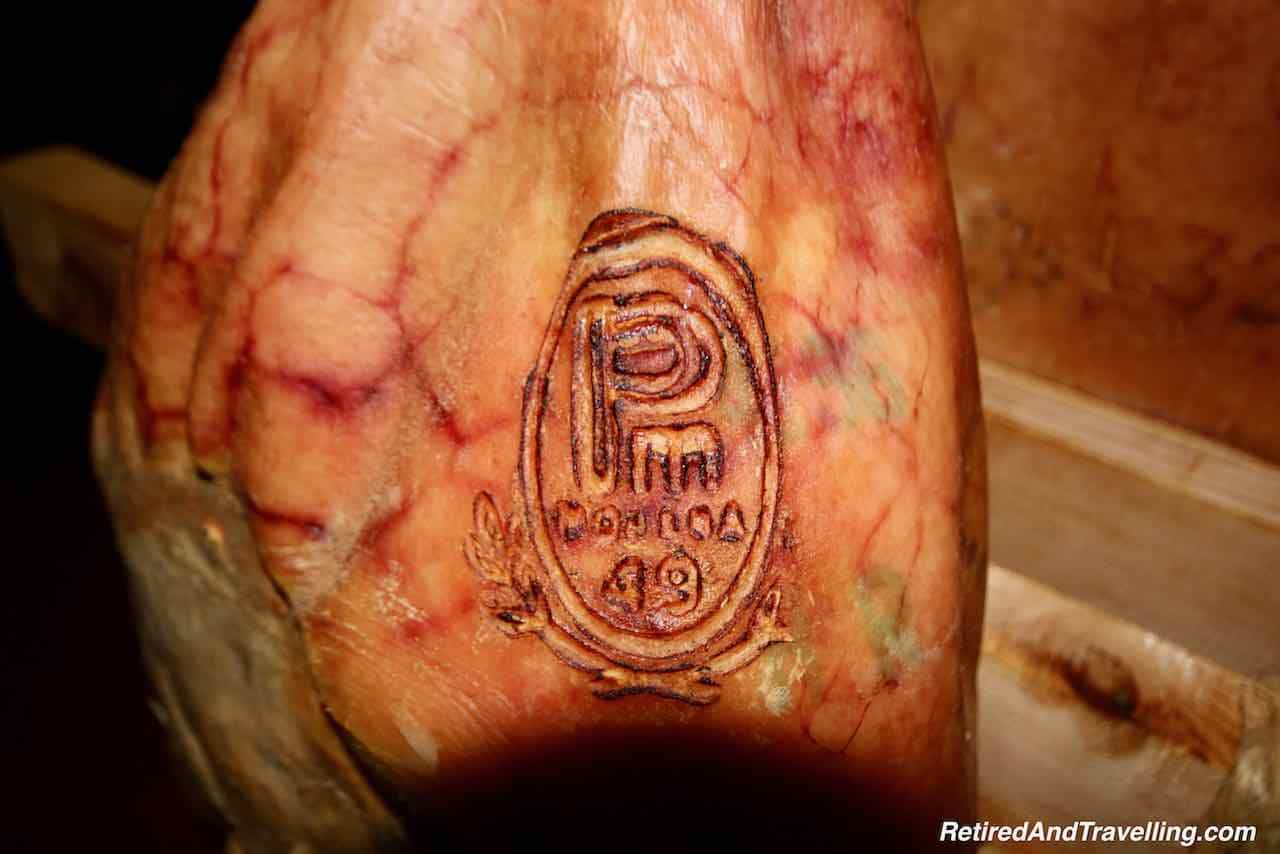 A Great Food Tour To See Bologna the Fat City

The ride back was quiet as we all contemplated on what we had seen. It was nice to see that the food producing traditions were still being passed down in families.  Small unique varieties were still being produced. The producing regions were tightly controlled and regulated and end product was taste tested. This meant that if we could find product certified from the region, we would have a hope of getting similar great tasting products at home.

Dinner that night was yoghurt and bananas, with a chaser of local wine. Not really a great example of  Italian cooking! We went to bed feeling totally Italian ready to explore the rest that Bologna has to offer!

Did you do a food tour?  What was your favourite?  Did we miss anything we should have visited in Bologna the Fat City? 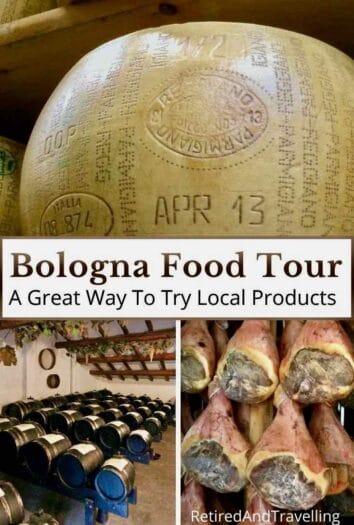