After touring the temples and tombs of Egypt, we headed for Jordon. We would once again see the most amazing ruins. On this day trip we would travel through Jordon and explore deep into the lost city of Petra. 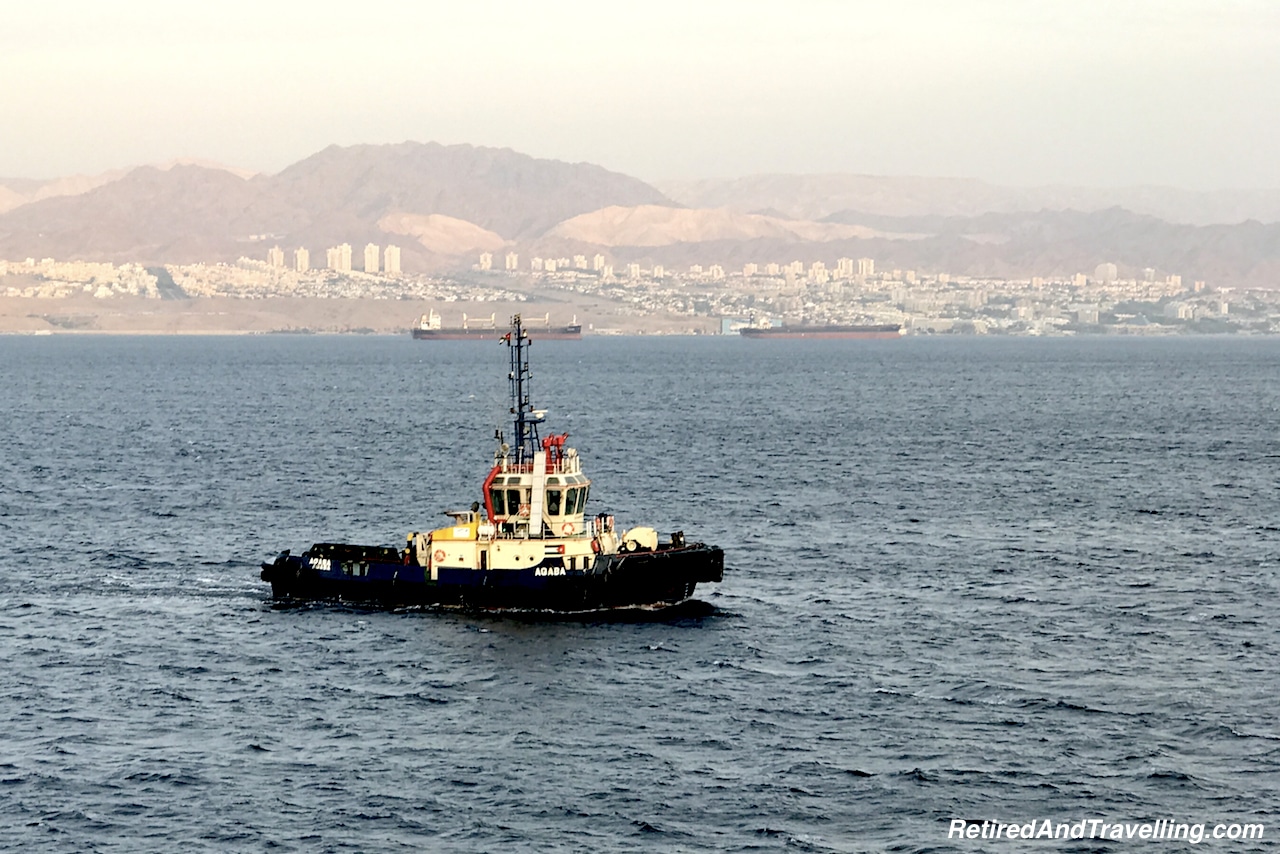 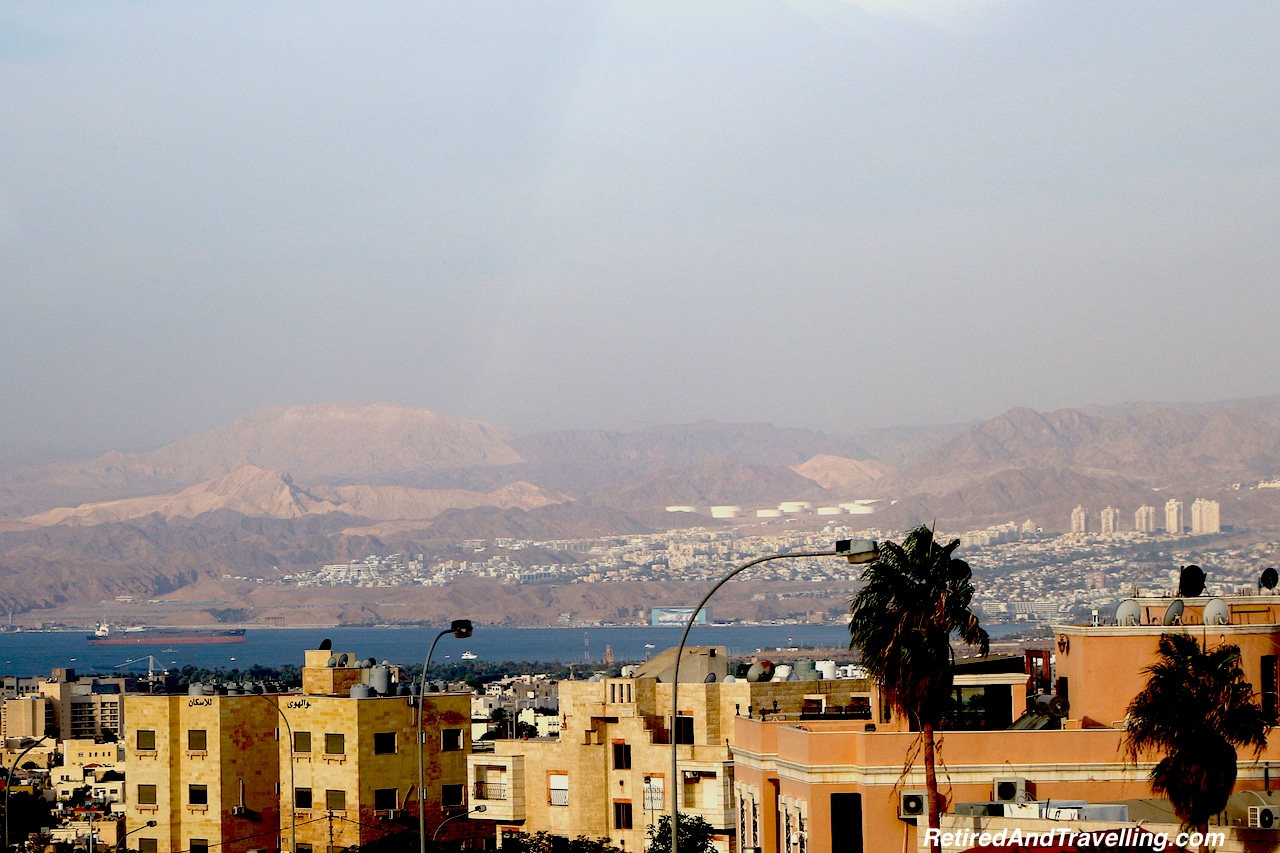 Leaving this ship, we joined our guide for the day. The guide was a great advocate for Jordon. He espoused the treasures of Jordon and all the things that should draw us back for a second visit. Along the way we got a great education on this interesting country bordered by 4 countries (Saudi, Israel, Egypt and Iraq). Jordon operates with a view of religious tolerance and neutrality, sometimes to the detriment of its tourist industry.

Our guide had been born in a cave in Petra, giving him great local knowledge. As a trained archaeologist he knew the history and was equally versed in geology. On our travel through Jordon with its vast vast rocky terrain, we learned a little about the geology and the people who inhabited this countryside. With rainfall less than 100mm per year, it was dry everywhere. But we did see signs of farming. 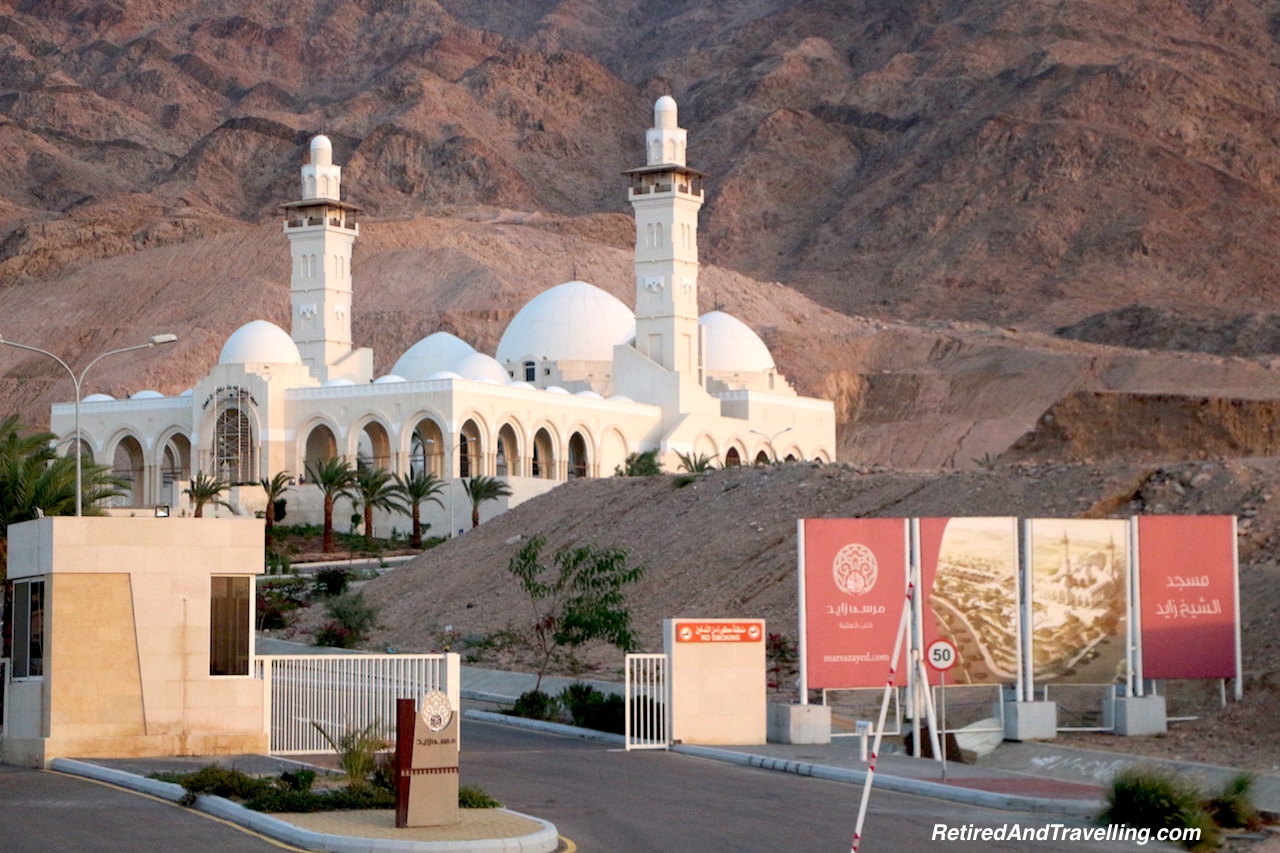 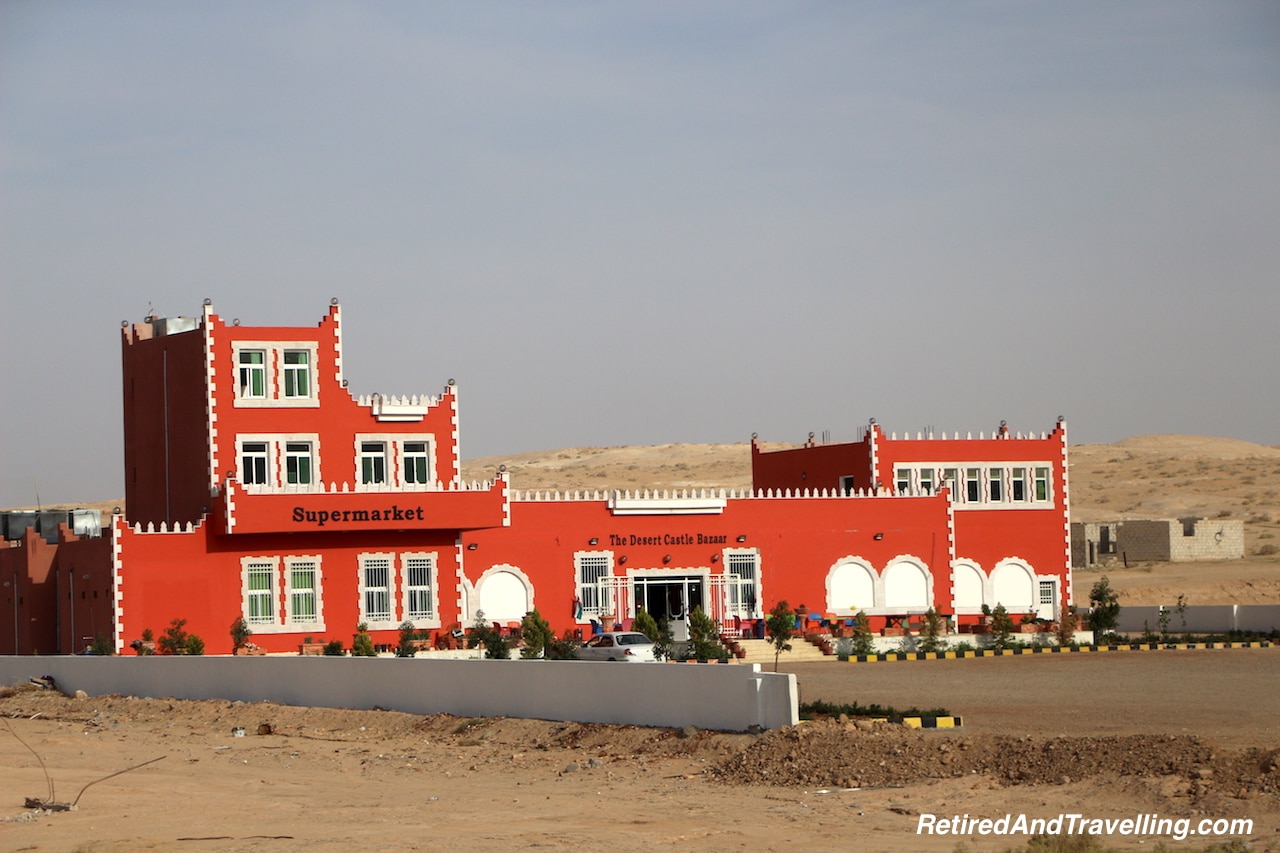 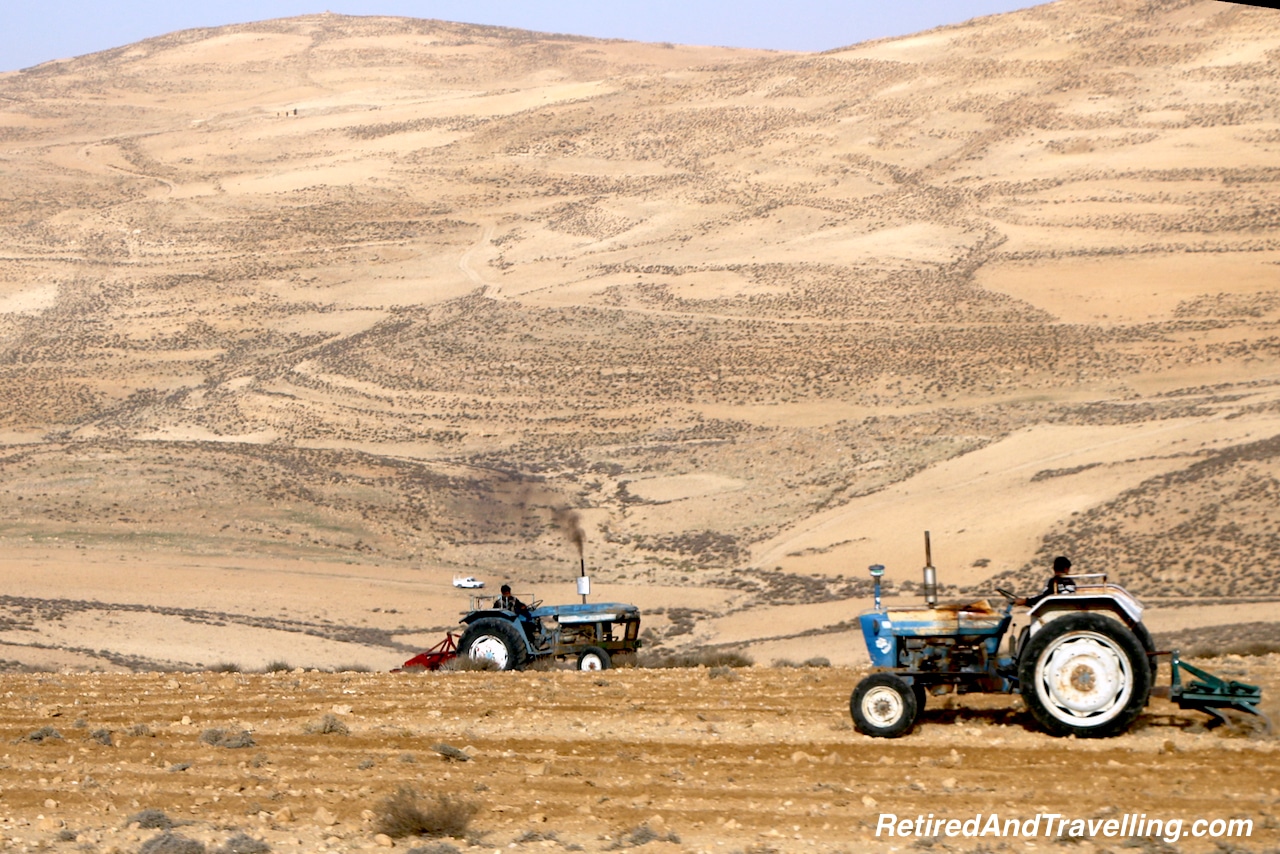 I was excited when we saw our first camels roaming on the side of the road. David was busy snapping pictures of the juxtaposition of sheep with a herder on his cell phone! 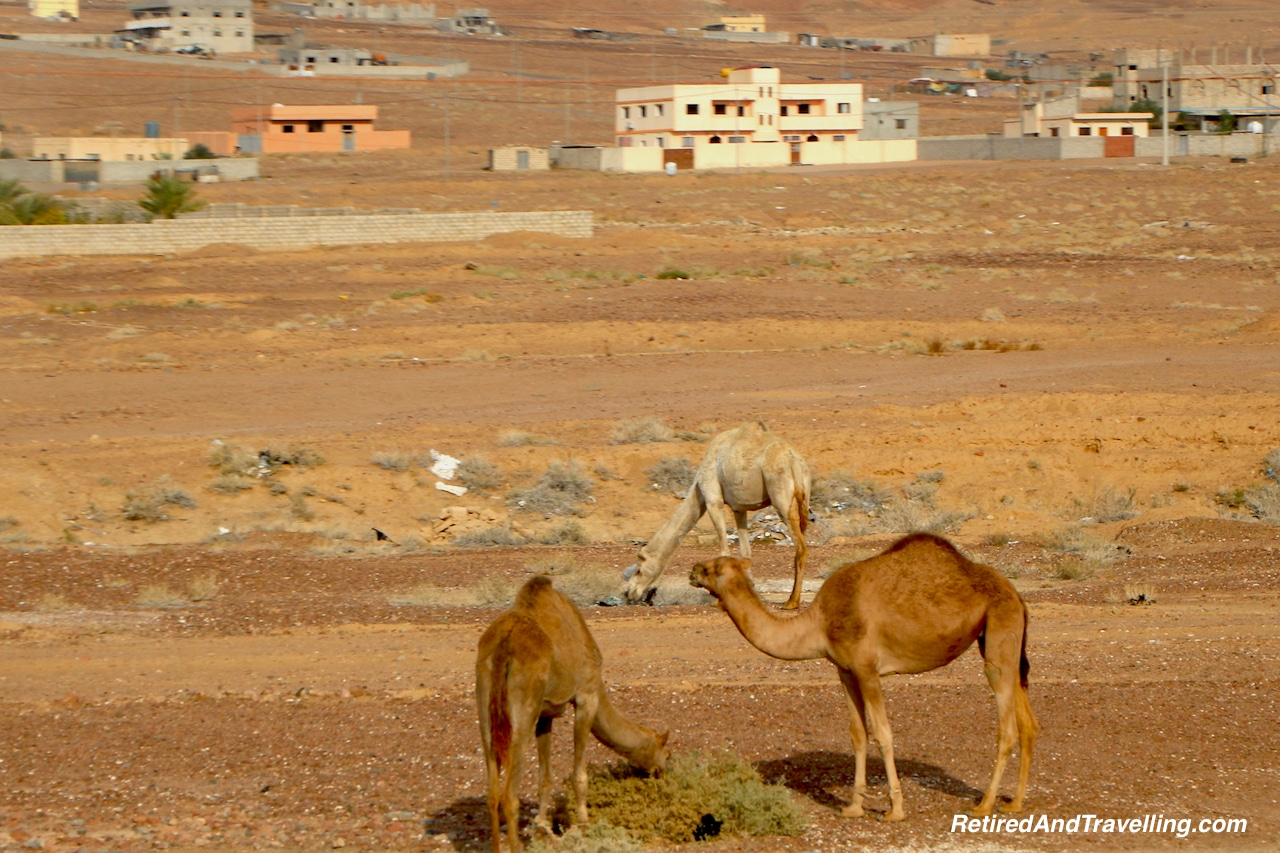 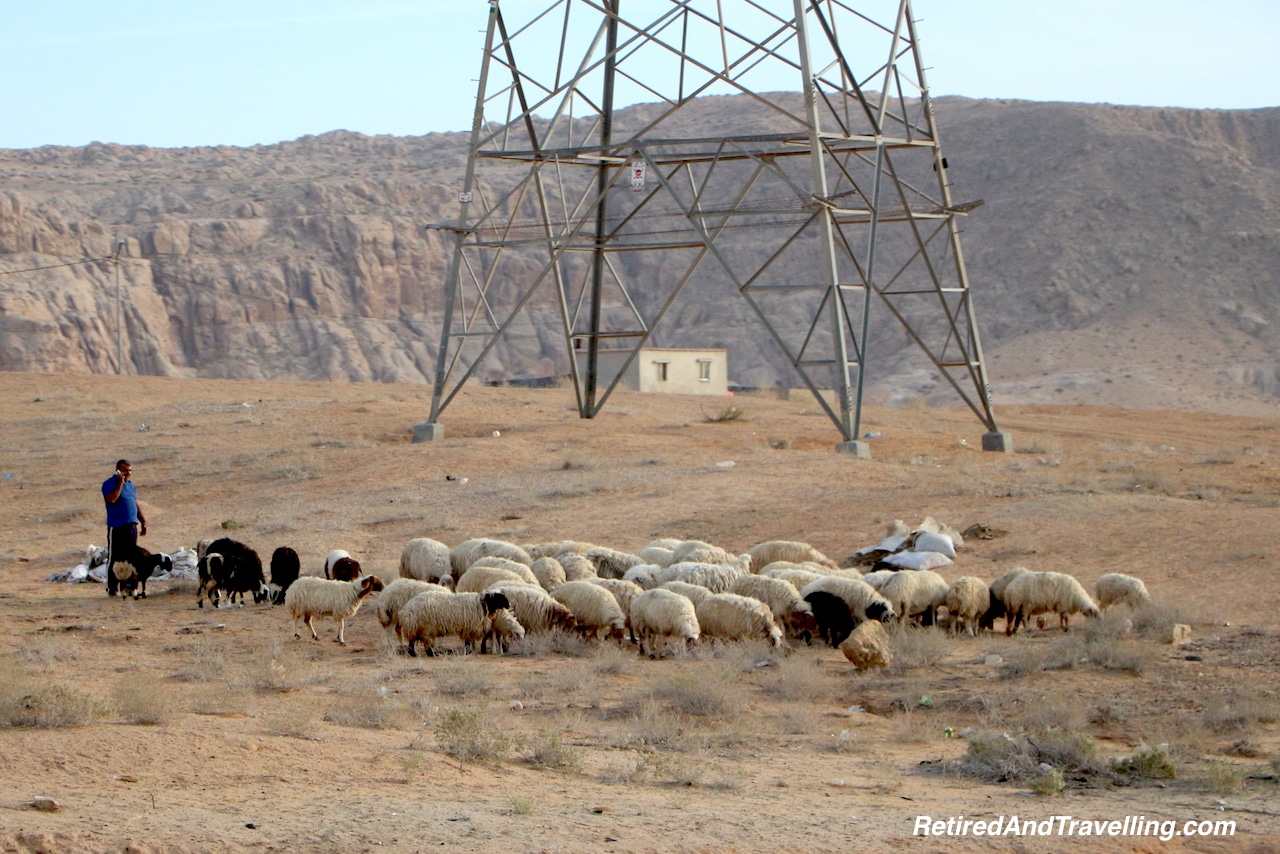 We saw the 3 layers of rock – granite, sandstone (above 600′) and then limestone at the top. Dark veins in the rock represented mineral beds that had oxidized. We were told that there were more than 32 canyons in the mountains. While Jordon has no oil it exported phosphate, potash and cement. 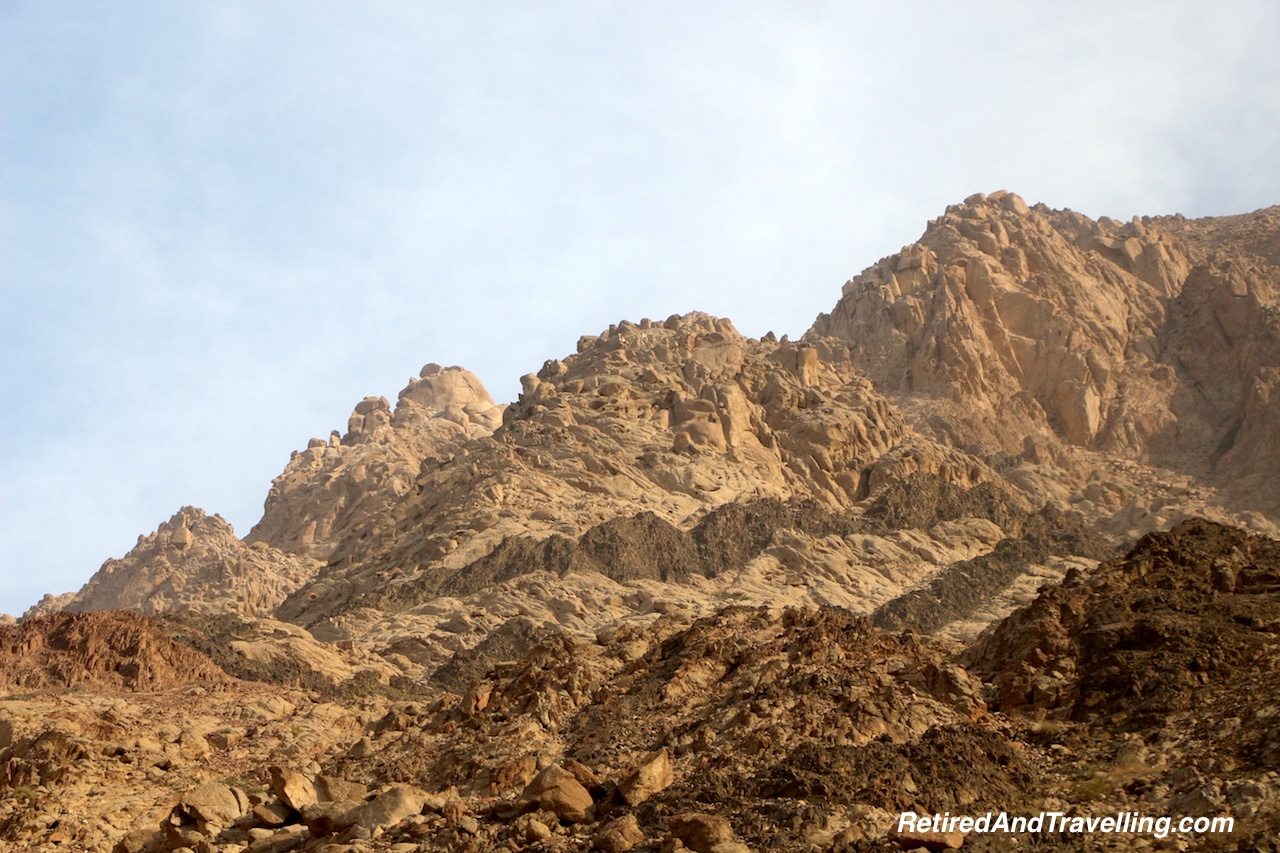 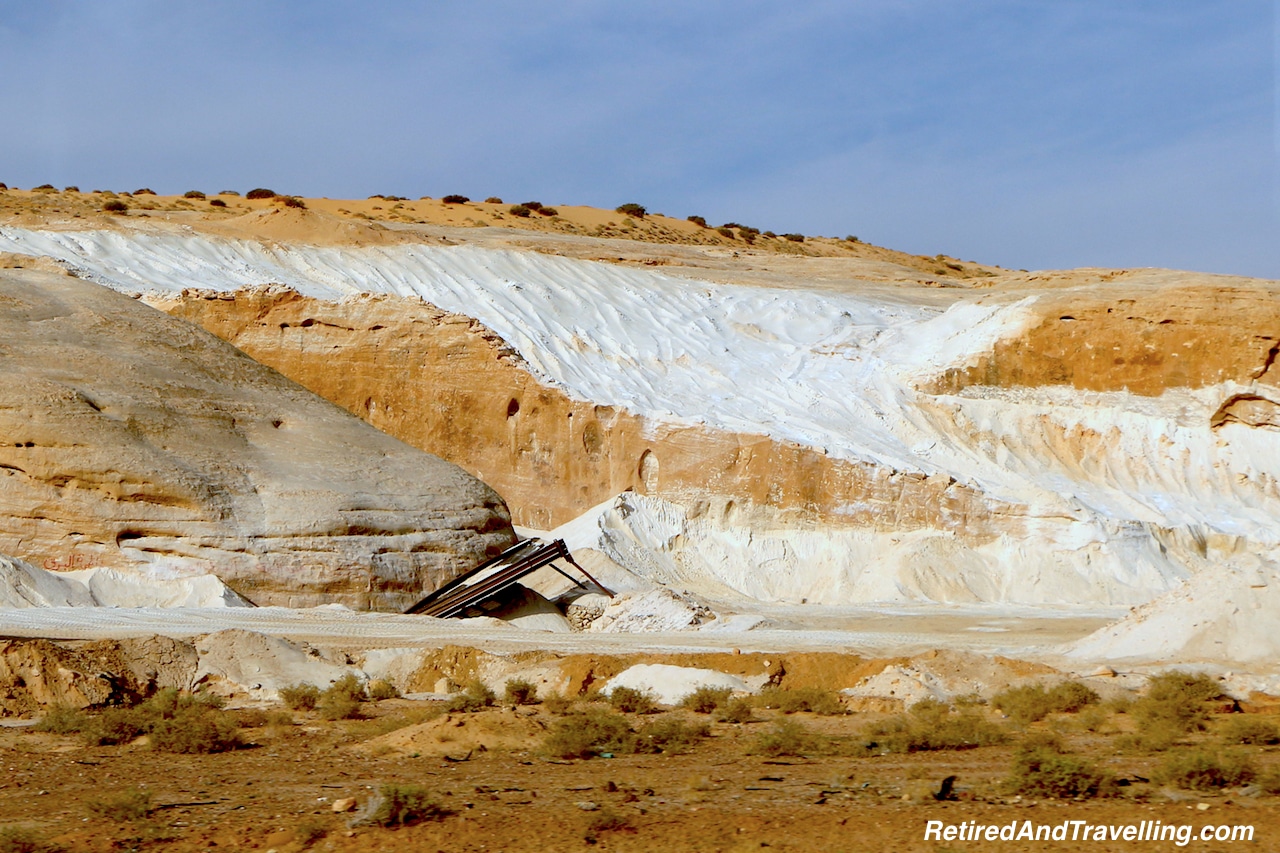 As we had found when traveling in Egypt, we had to pass through security checkpoints. Jordon is stable at this time. But the sign of tanks had us wondering. 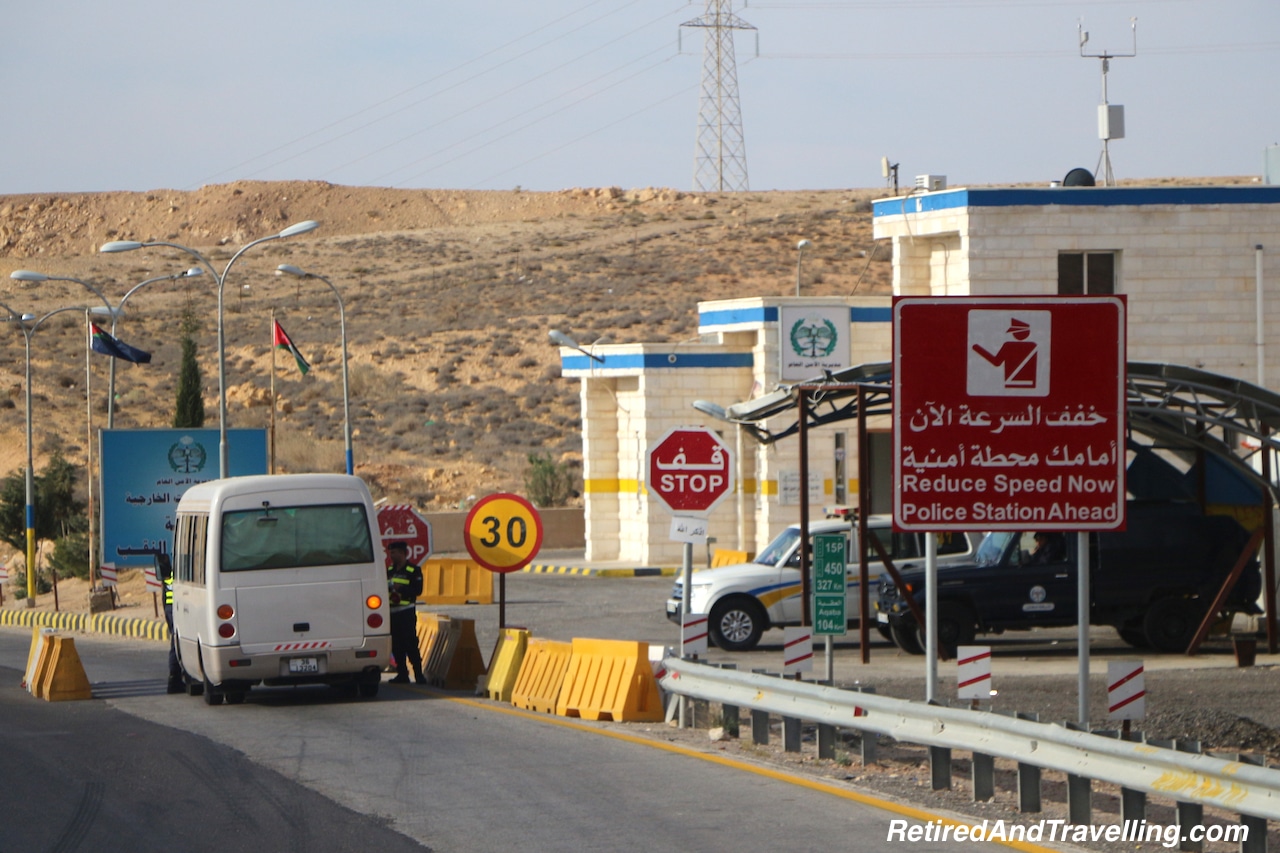 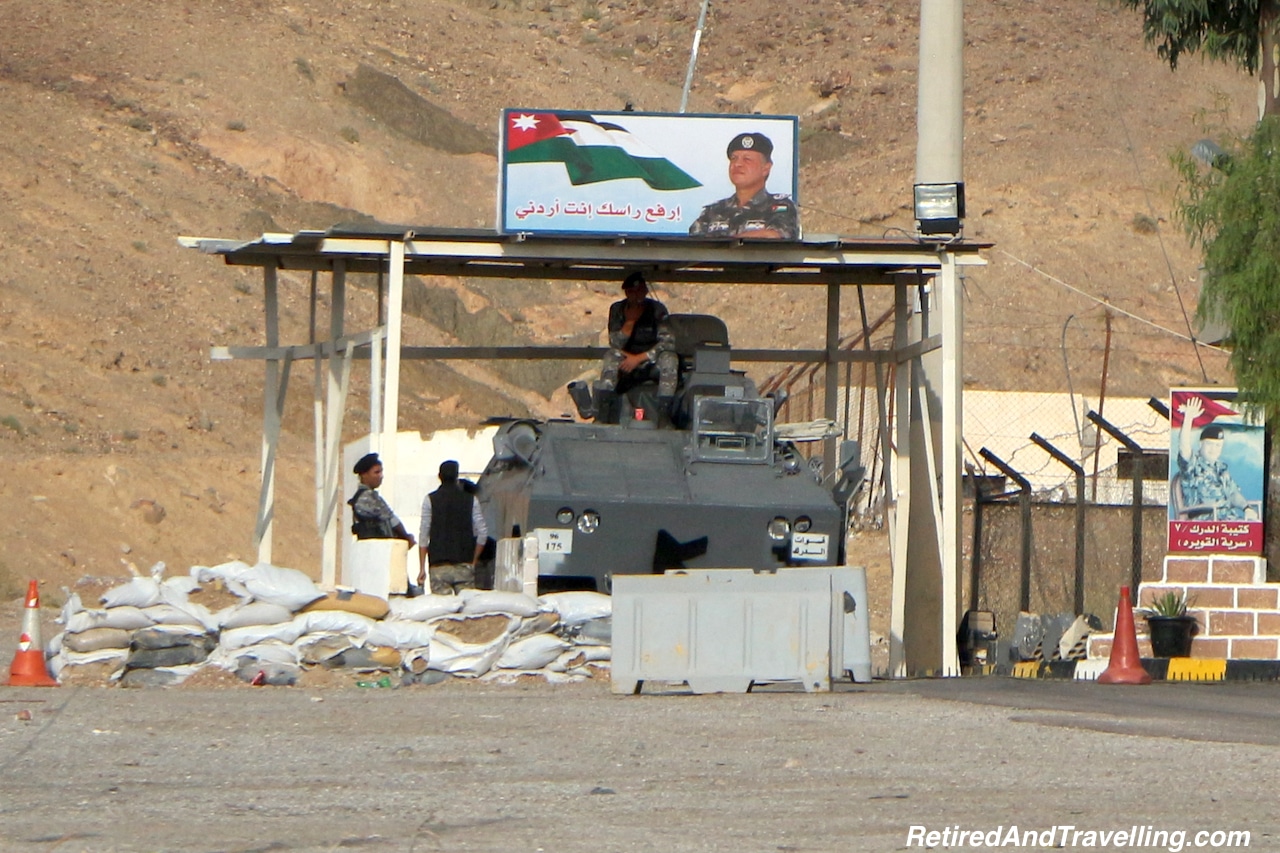 The Kings Road in Jordon

Most of our travel through Jordon was along the wide highway that services the trade in Jordon. The road got narrower and more rough when we exited at the Kings Road. Our guide talked about the history of the Kings Road. It is mentioned in the Bible, used by the Romans (milestone tablets found during construction) and noted in Islam.

We had one stop at a viewpoint for bathroom and shopping break both on the way in and out. Somewhere off in the horizon were the ruins of Petra. We are at the point in our life where we are trying not to accumulate more “stuff”. We browsed through the store. The stops ended up being much longer than planned as others filled their shopping needs. 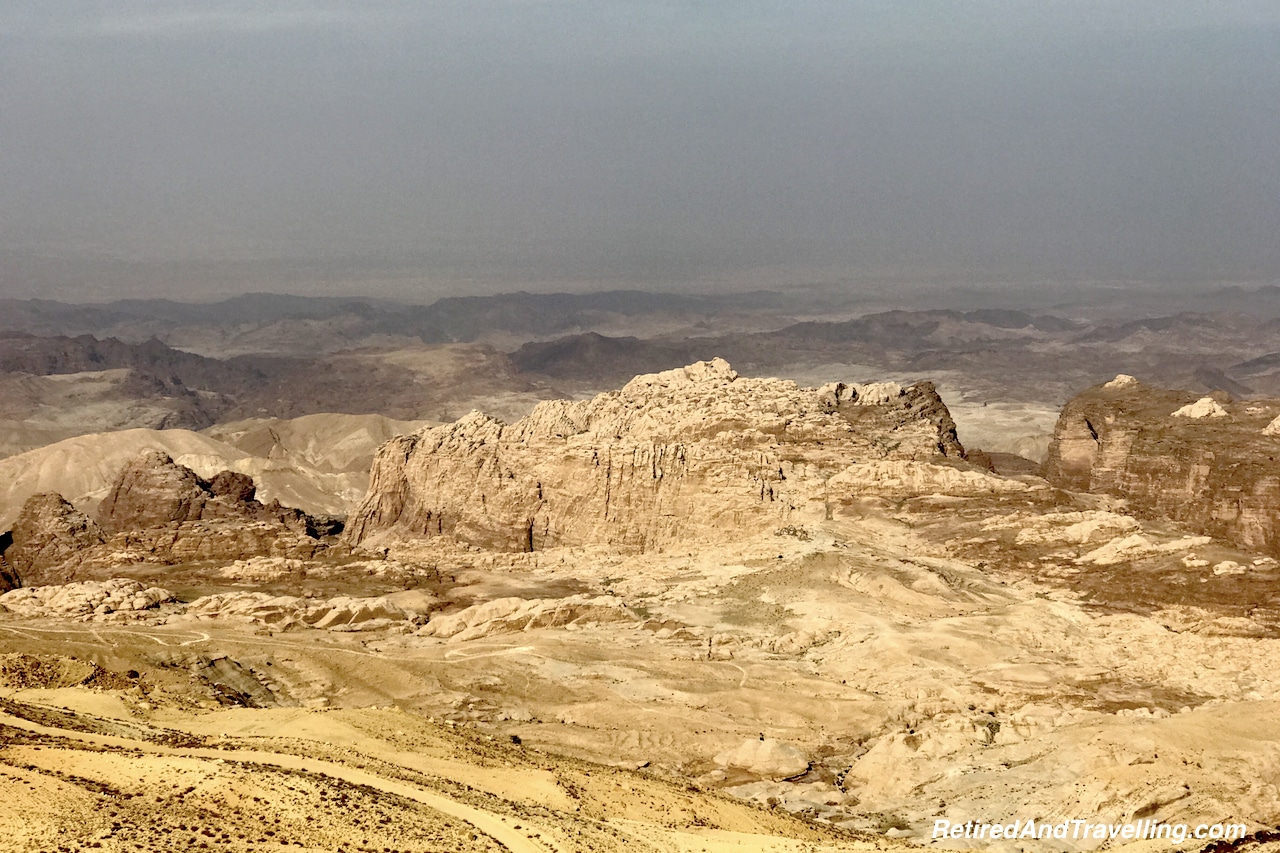 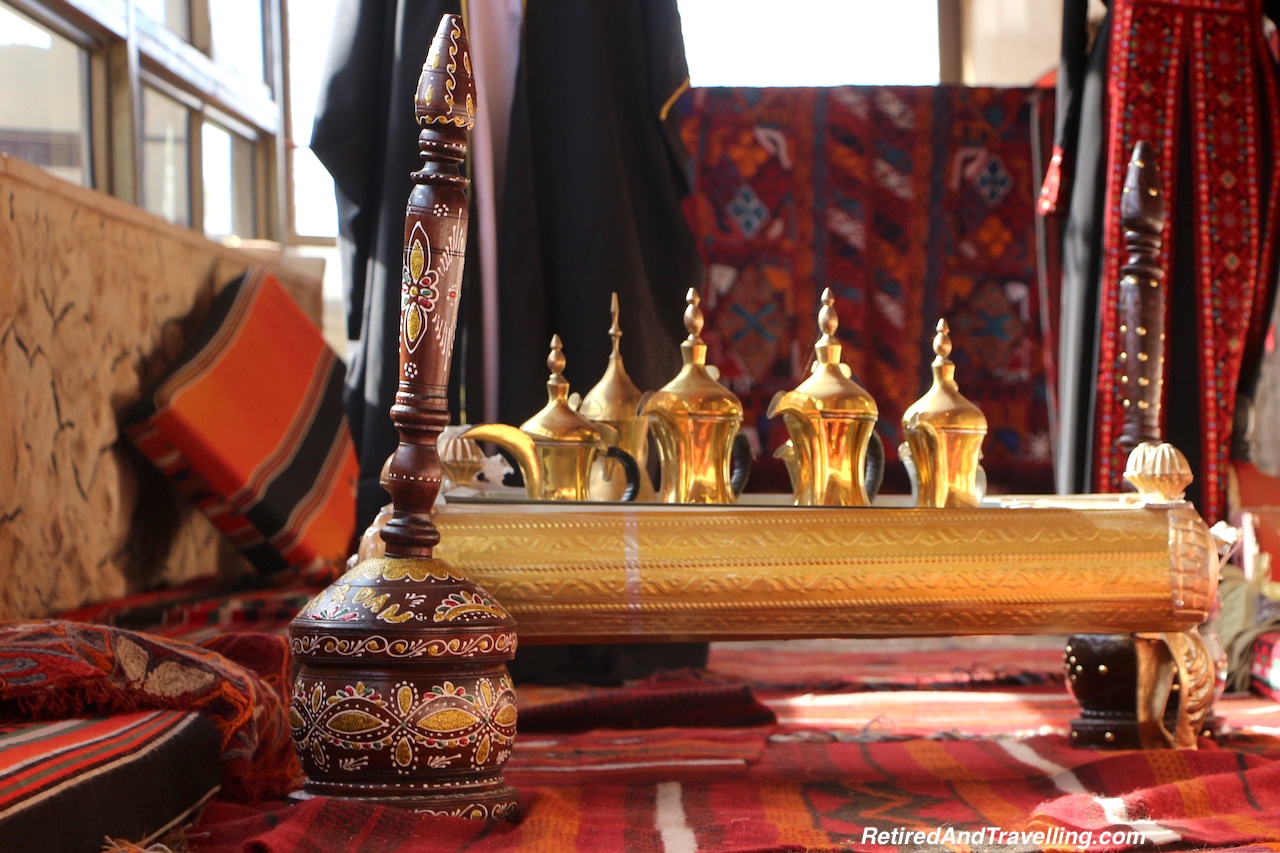 The History of Petra

Petra was the capital of the Nabataean people. They controlled the trade routes in Arabia, allying with the Romans. At some point, the Romans took over and converted to Christianity. After a major earthquake, the city went into decline when most of the housing was destroyed. It was re-discovered by the Crusaders and a small fort was built.

After a short period, the city was largely abandoned by the Europeans and was inhabited by locals only. Petra remained largely in isolation until in 1812 a Swiss explorer rediscovered the lost city of Petra. It was not until 1930 that the first tourists arrived. By the early 1990’s, only a small part of the site had been uncovered. Concerted efforts were made to map and excavate Petra. Today much of the lost city of Petra can be explored.

Petra reached its peak about 2,000 years ago with a population estimated at 20,000 inhabitants. When you travel through Jordon to the the modern town of Petra, you will find only about 3,000 inhabitants. But that number swells when the tourists visit the ruins (in 2013 over 600,000 visitors). There are shops and major hotel chains in the town if you visit for more than a day trip. 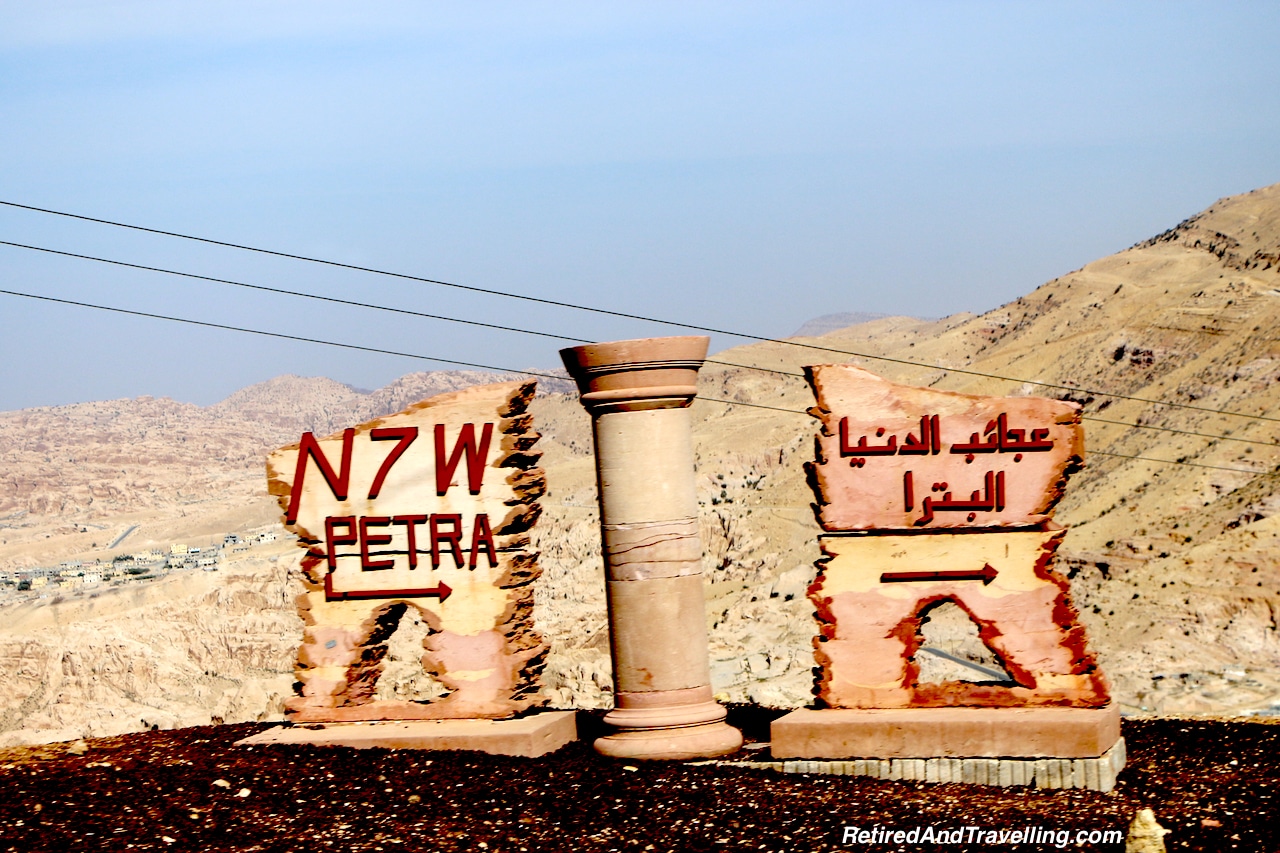 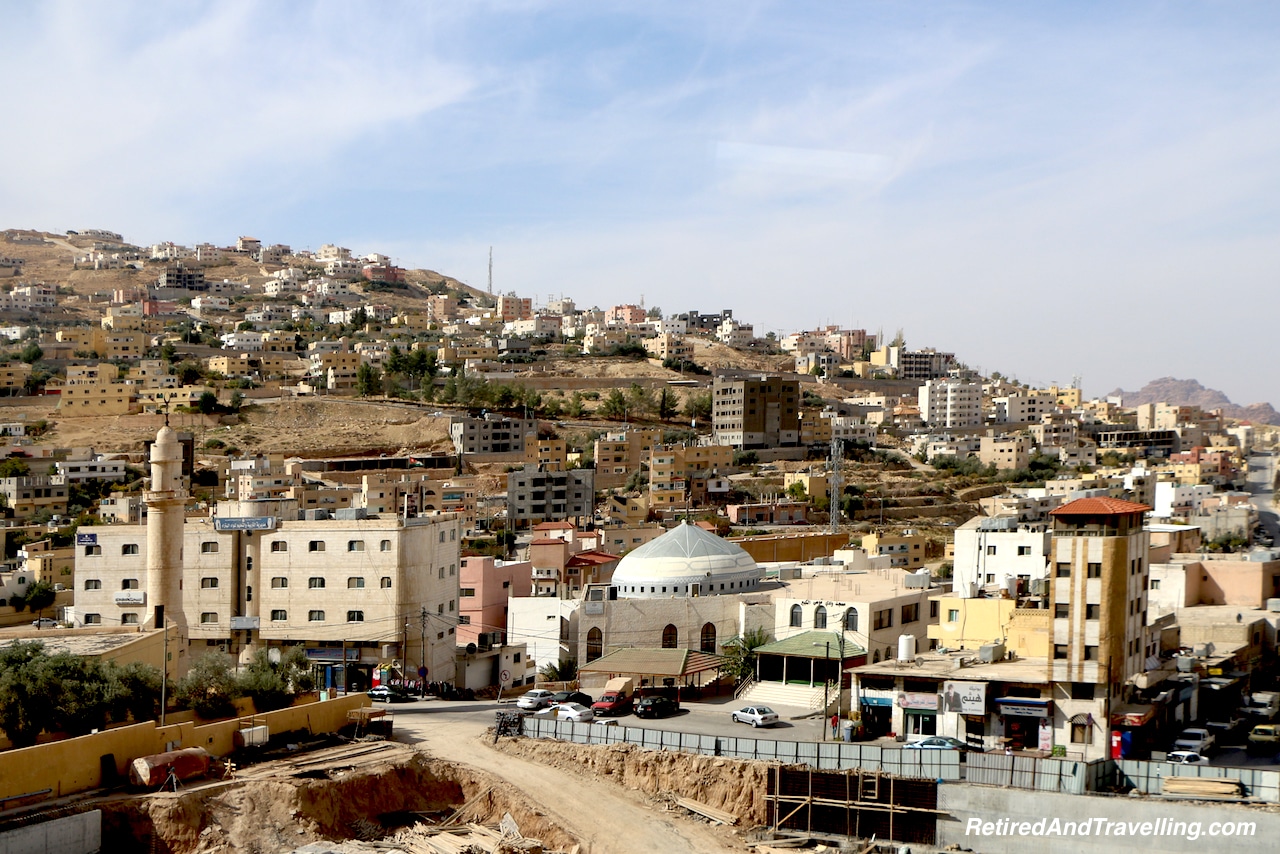 Entering the Lost City of Petra

The bus loads of cruise ship passengers all arrived at the ruins in Petra about the same time. We were not the only one in port. 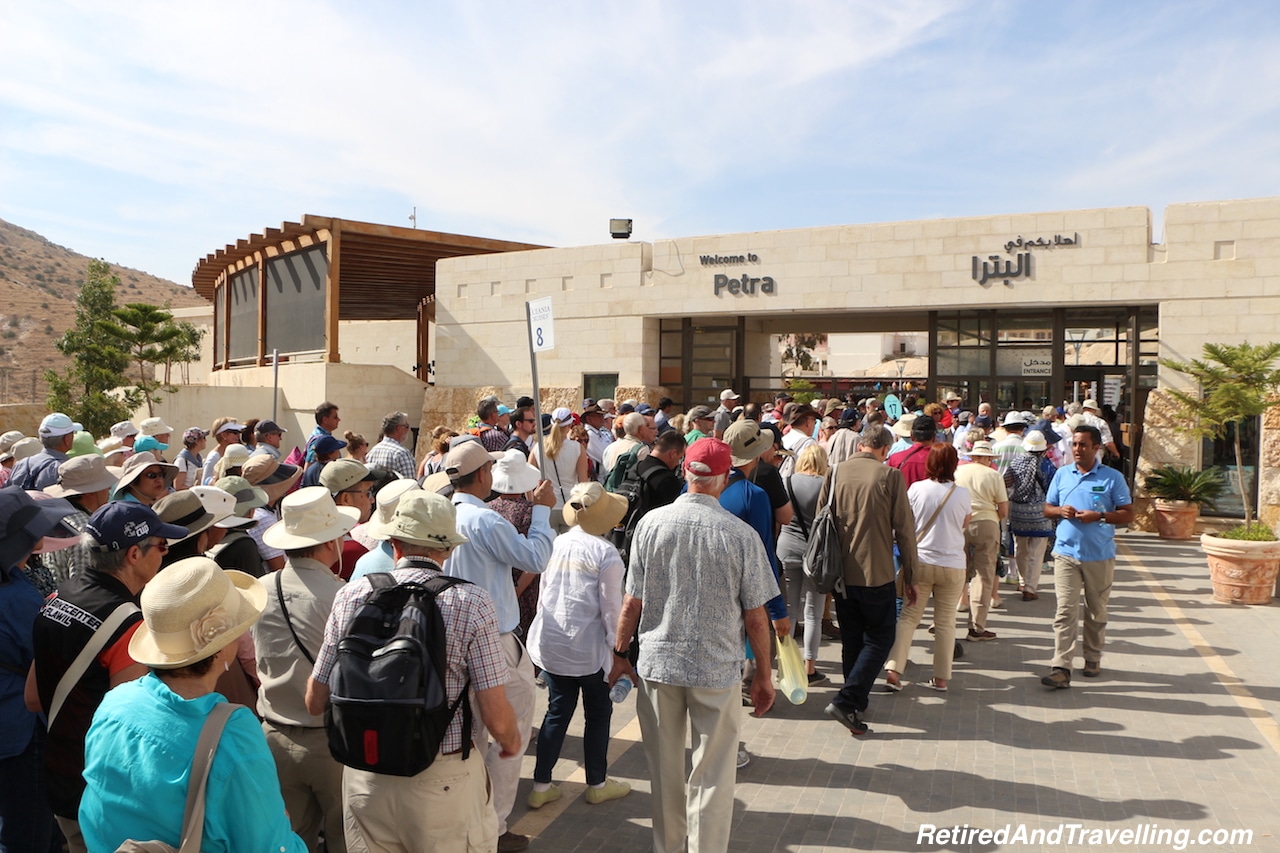 After going through the visitor centre, we headed for the long walk to the ruins of Petra. It was an interesting walk with much to see along the way. 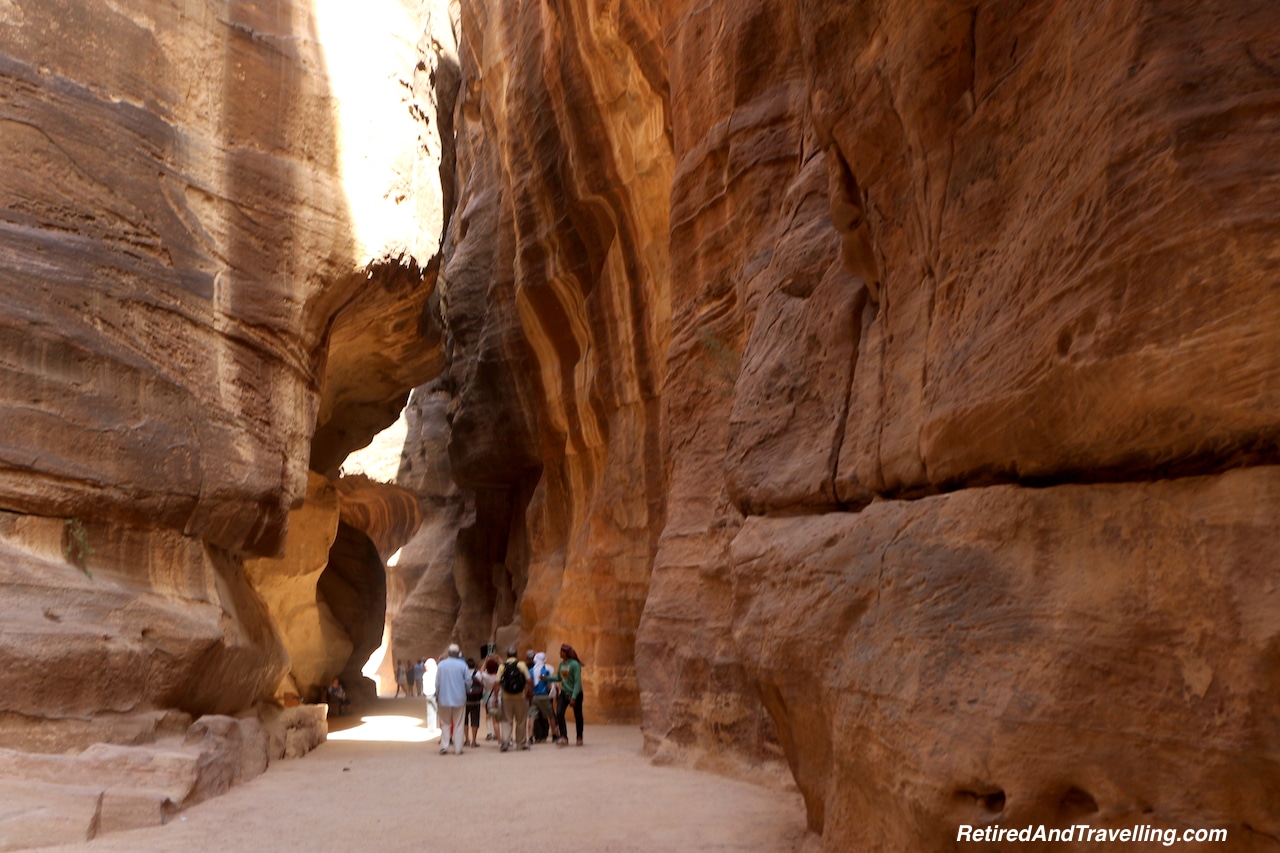 When we came out at the Treasury building, everyone stopped to take this amazing sight in. 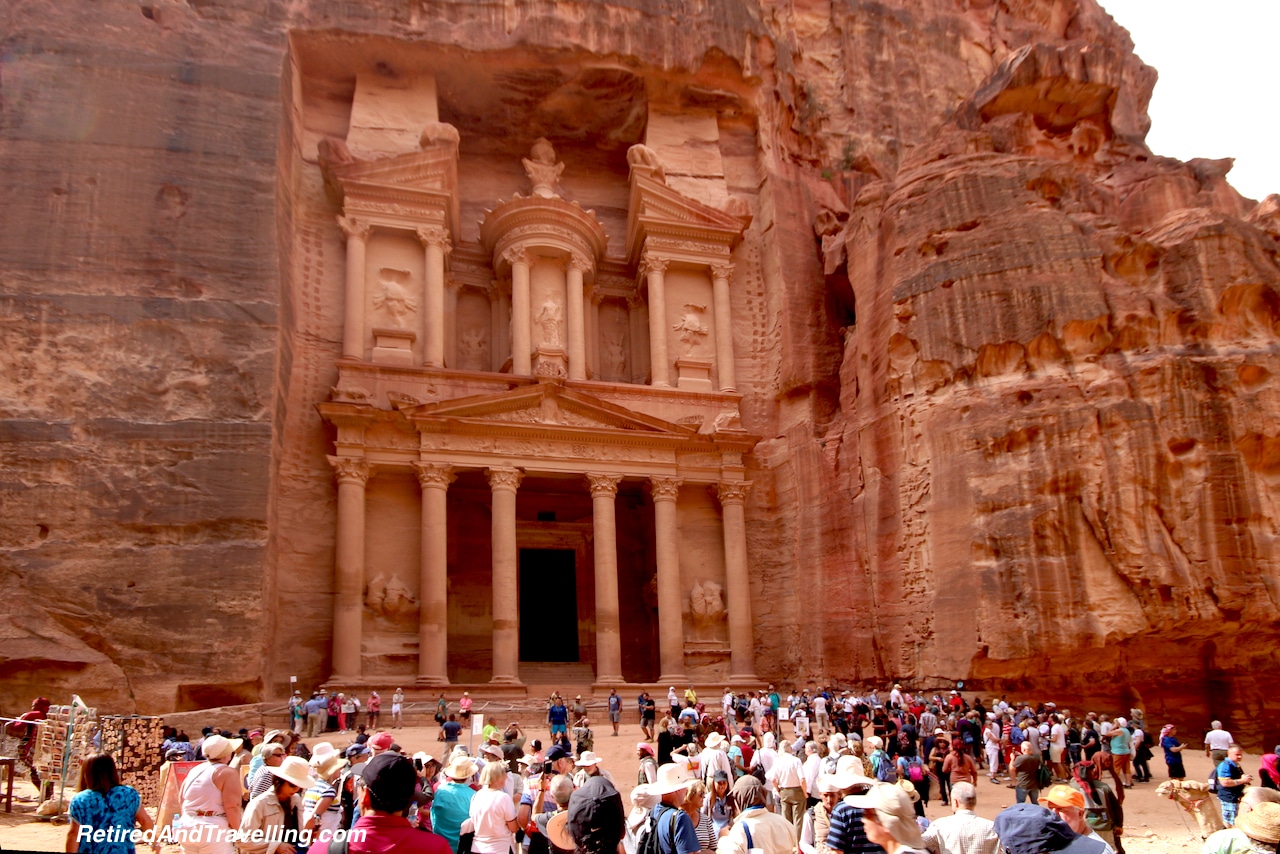 As we walked further into the site, there was more to discover. 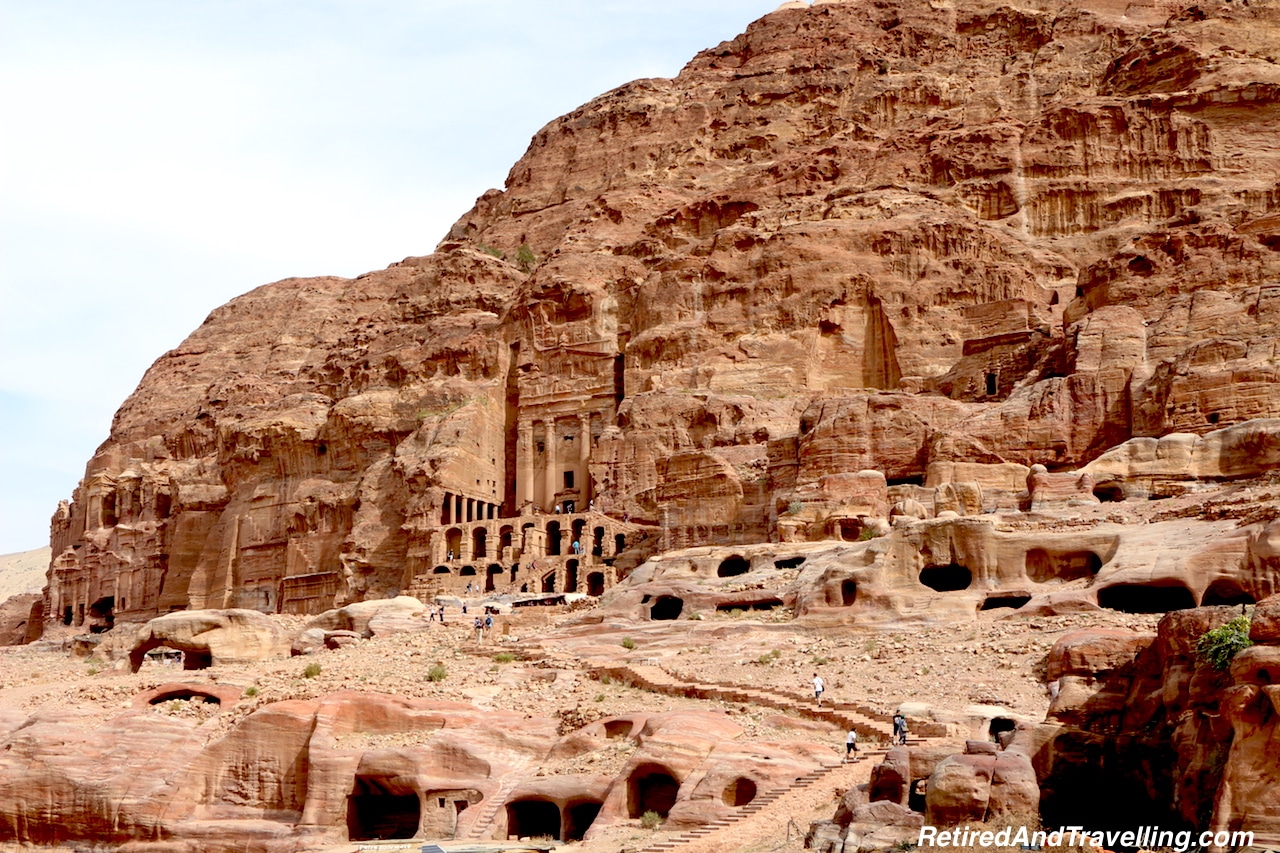 We had only about 60 minutes before we needed to be back at the lunch spot. We did not have time to explore further. Most people headed back by foot but some waited in line for a carriage ride. We decided the bumpy, fast carriage ride would be harder on our bodies than the walk. 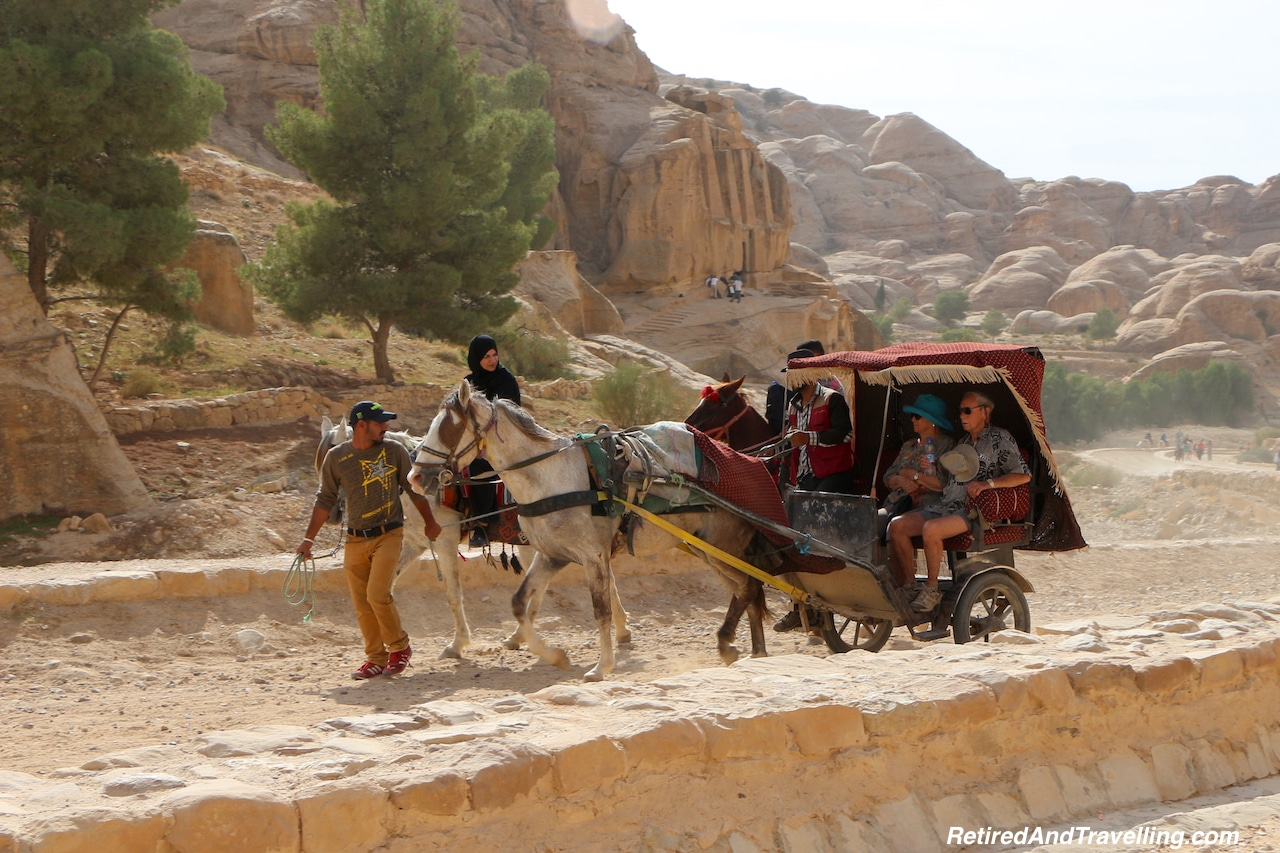 Too Quick A Visit to Jordon

Other than visiting Petra, we didn’t see much of Jordon. Our guide assured us that travel through Jordon offered much more to see. Our guide also talked about how good Jordon was for water sports. Several of the cruise ship excursions headed to the water. This might be another place for us to scuba dive in the Red Sea.

Our travel through Jordon had given us a great view of countryside and geology in Jordon. We had a great tour of the lost city of Petra. We probably did as much of the lost city as we could have done in a day tour. A longer visit to Petra would allow us to see the places deeper in the ruins.

Many of the Jordon tours visited Wadi Ram which was the base used by Lawrence of Arabia. While in Jordon, Lawrence wrote a book called the “7 Pillars of Wisdom”. The people who stayed for dinner and sunset spoke glowingly of their tour. That will definitely be on a return visit.

Have you had an opportunity to travel through Jordon? What should we add on a return visit?