San Luca Porticos – The Mother Of All Porticos in Bologna

Bologna should be known as the city of porticos. During our week in Bologna we walked miles and miles of porticos.  But no visit was complete without walking the 666 porticos to San Luca high on the hill above Bologna.

The Train To The Top Of San Luca

Most youngsters that blog about this site suggested that the experience was not complete without a walk up and down San Luca.  But I was not so easily shamed. The morning dawned grey and overcast. I might have said the rain caused me to wimp out.  But I admit that I never intended to walk up and down.

We took the city bus to Piazza Malpighi.  From there we caught the little red train San Luca Express up to the top. 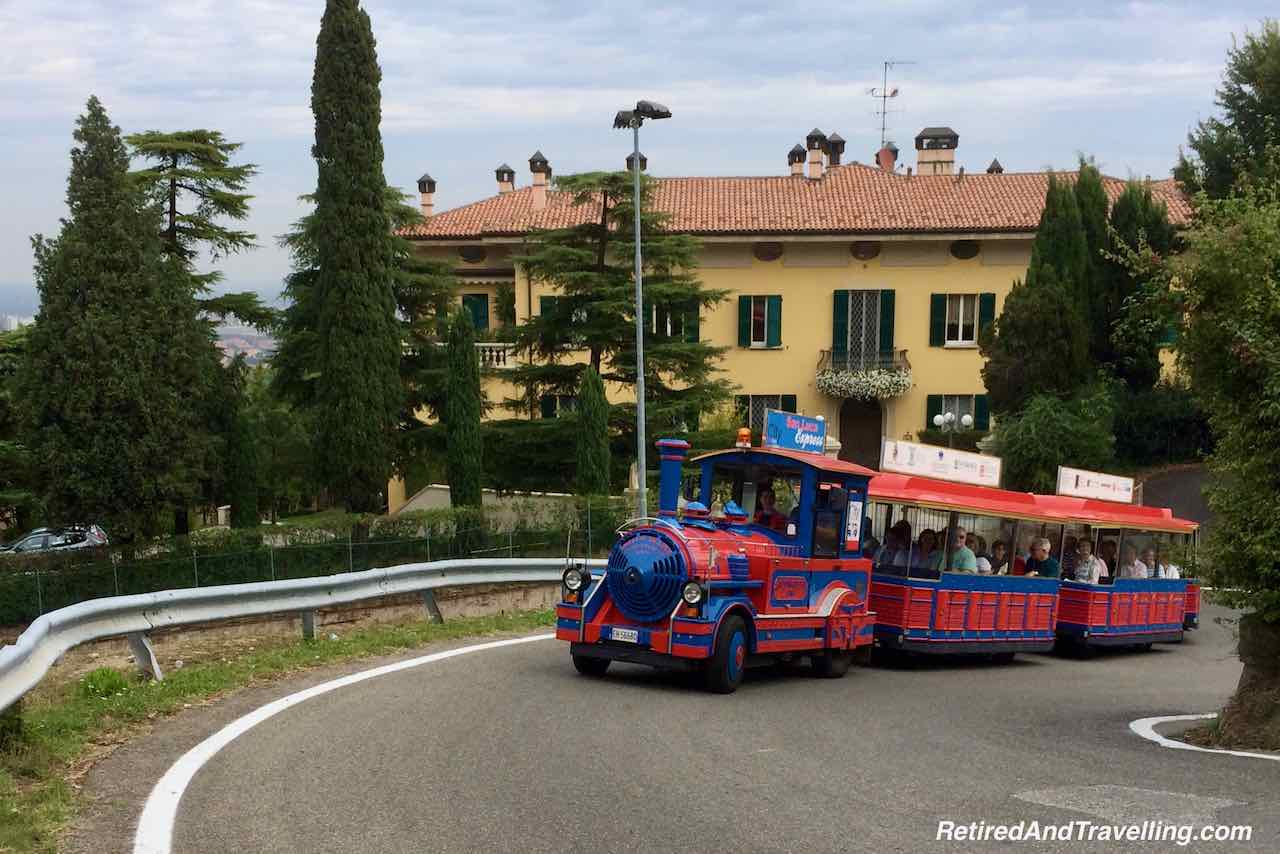 The Church Above Bologna

Rain started as we pulled out.  But by the time we got to the top it stopped.

Let off at the upper parking lot, we walked up the stairs to the church. On our ride up we learned about the history of the church. The long stretch of porticos was built to cover the stream of faithful visiting the Madonna.  And the parade of the icon up the hill. The church was re-built several times.  The recent incarnation was designed by Carlo Francesco Dotti in 1723. 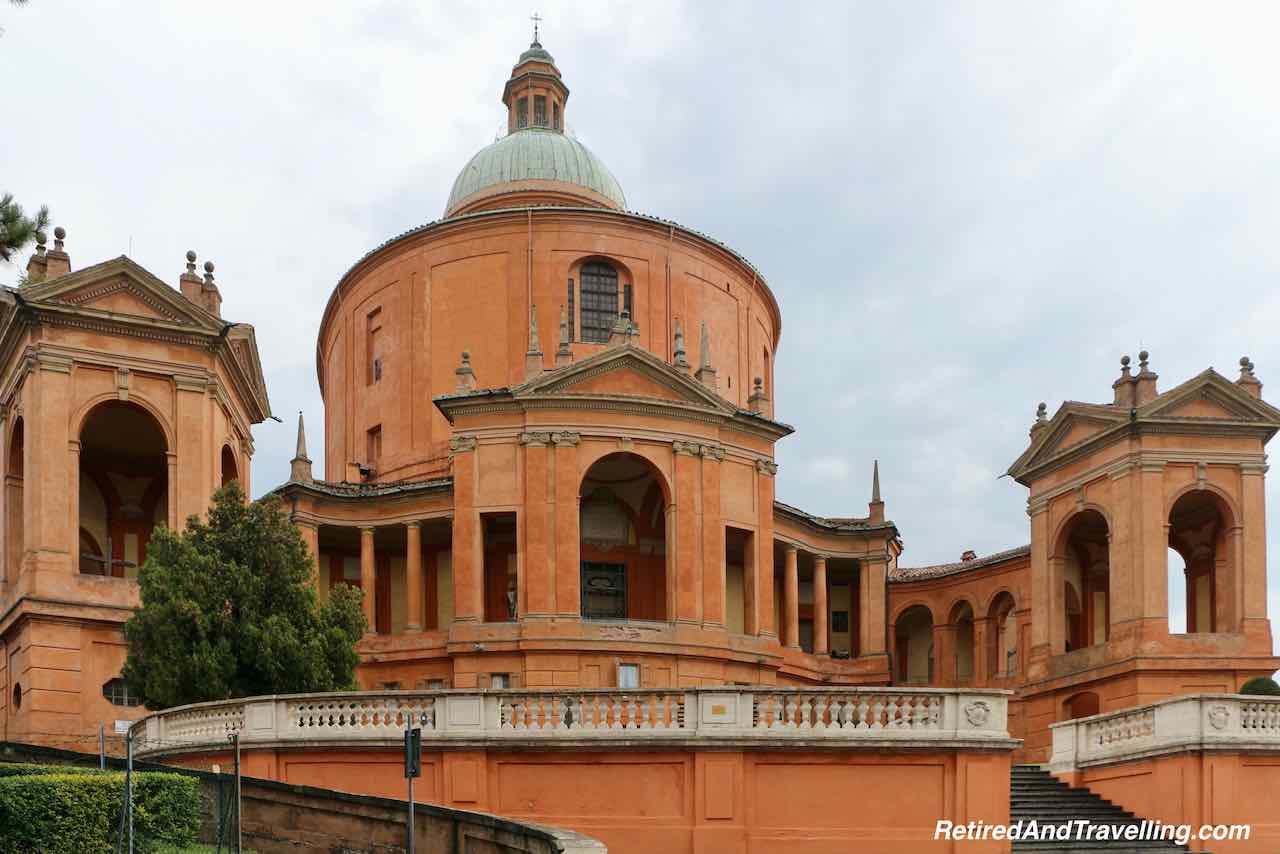 The church was quiet as we wandered around.  We took the stairway up and stood before the Madonna. Not being religious we just stood back for a moment of silence as others said their prayers. 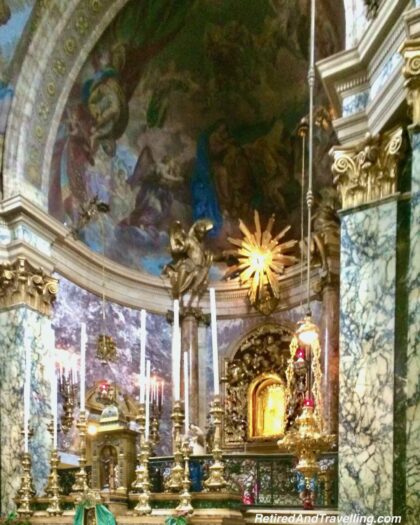 The view of Bologna and the countryside from 300 meters (984ft) up was impressive.  Even the clouds in the sky did not take from the view. We could not quite make out our hotel even though we could saw San Luca clearly from our hotel window! 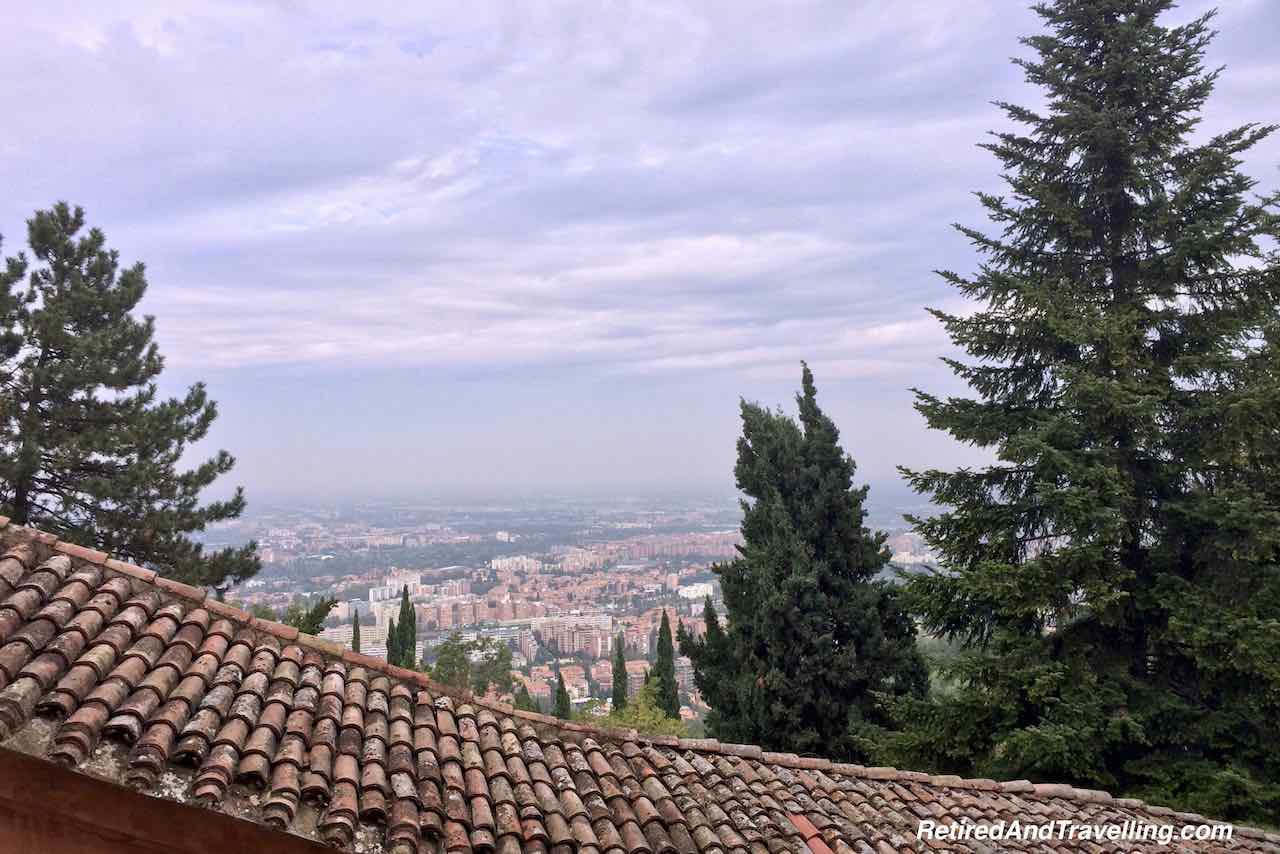 After wandering around the summit for a bit we could no longer avoid the trip down. Starting at portico 666 we began the walk down (3.8km or about 6,800 steps on my pedometer). 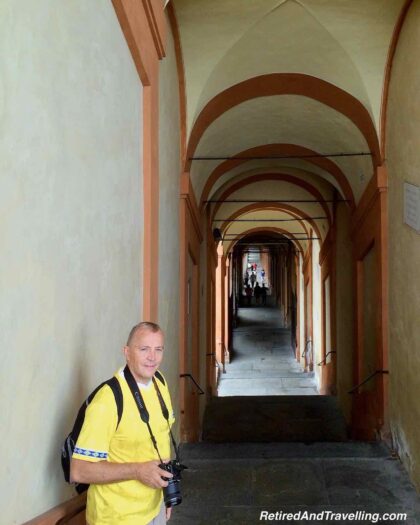 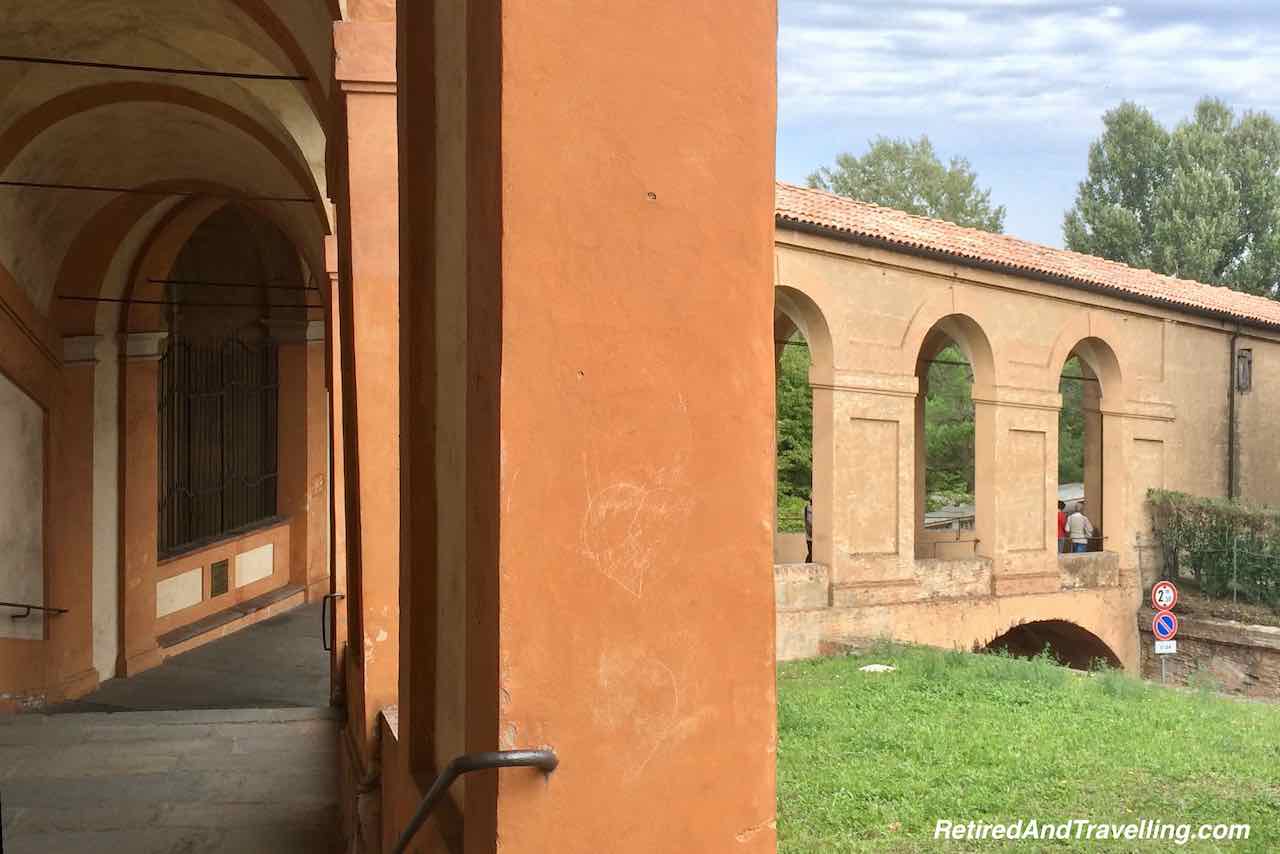 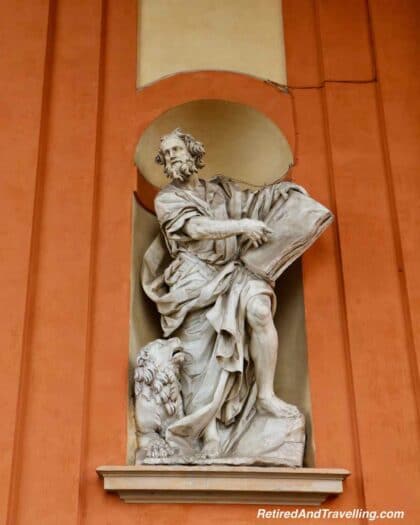 The top 350 San Luca porticos were quite steep.  Stairs were mixed with ramps.  But they flattened out at about Mellancello. This was the point where the #20 bus dropped you off if you wanted to skip part of the walk up.  Or if you wanted to call uncle the bus from here would take us home.

We stopped for a short mid-descent treat at Gelateria Melancello.  We sat with the old guys on their plastic chairs outside. At this point we could have grabbed the Number 2 bus.  But we wanted to see it through for the full walk down. 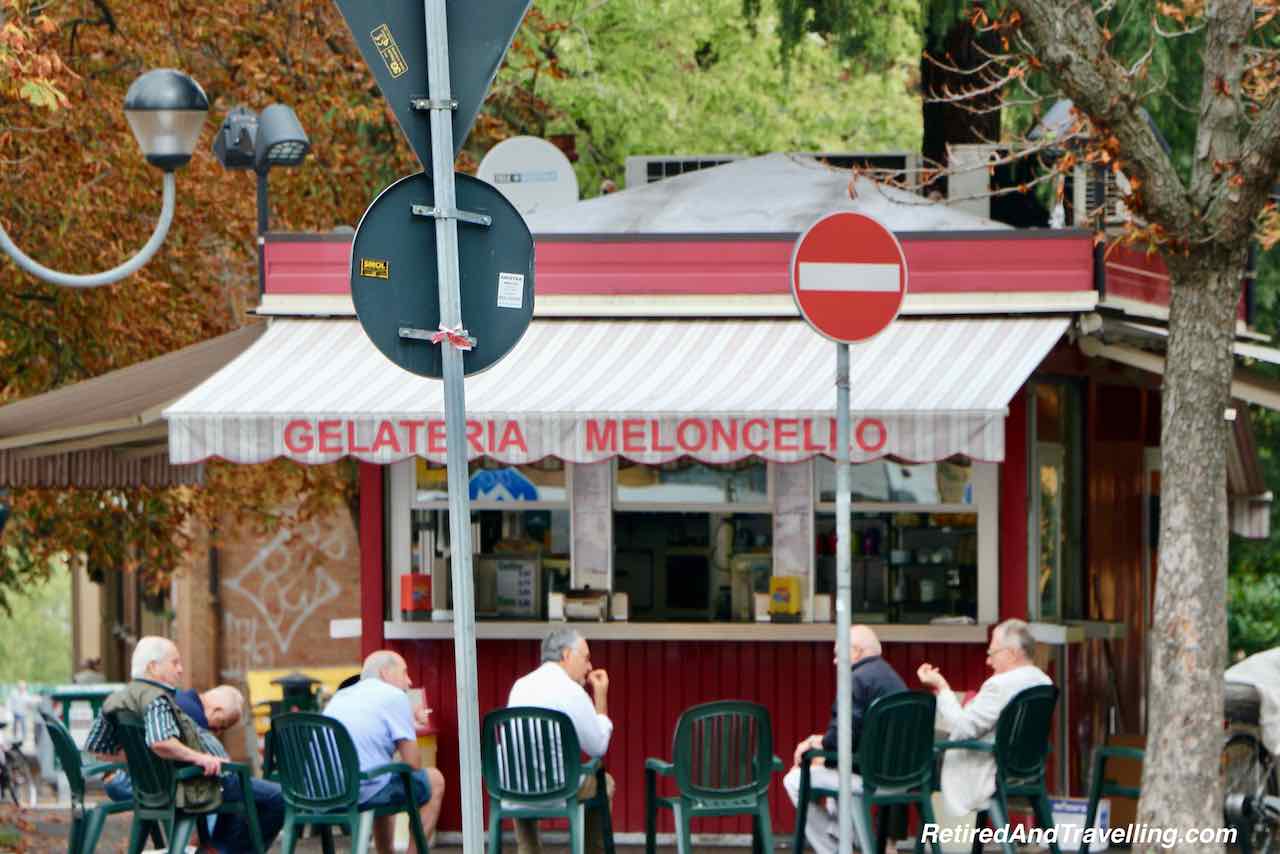 As we walked along the San Luca porticos, several of the arches held statues, remnants of small chapels or paintings. 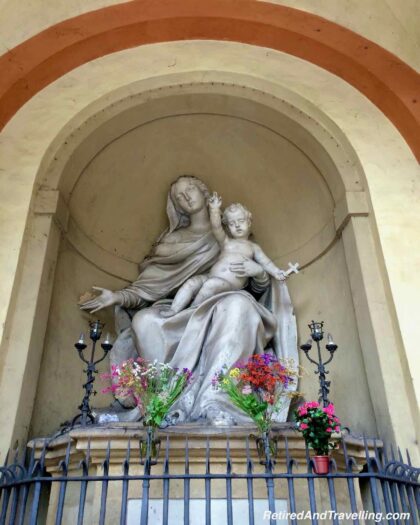 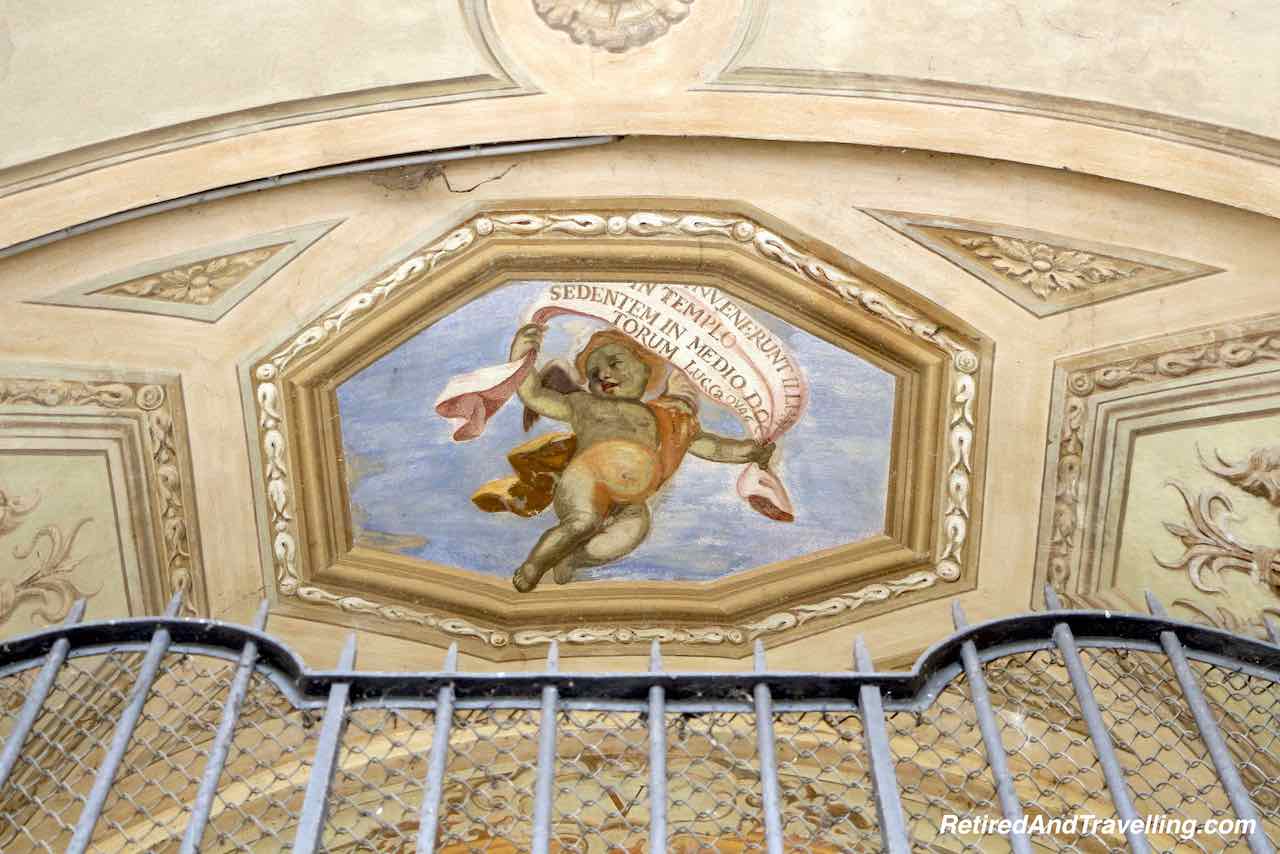 We plodded along steadily while we watched mostly younger folks walk or even jog up.  We were entertained by a basketball player as he did his exercises along the route.  He was was quite amused by the pics we grabbed of his routine. 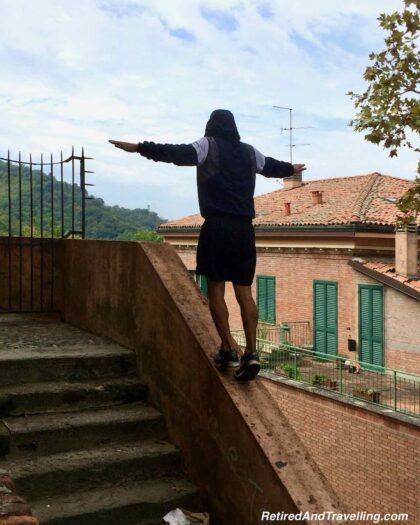 By the time we reached portico #1 at Porto Saragozza, our legs called for a break.  We finished our walk down the 666 San Luca porticos from high above Bologna! 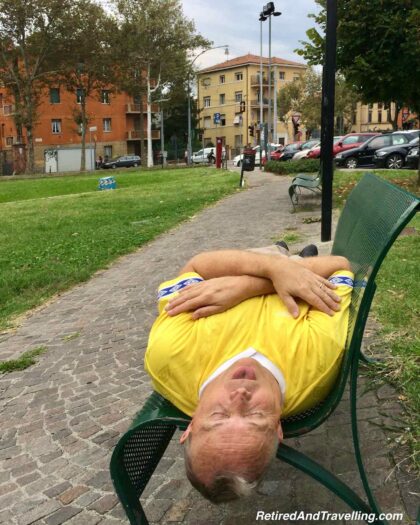 Walking off some of the lactic acid build up, we wandered back as far as Piazza Malpighi. We then hopped the city bus to our hotel. The rain started again as we approached home.  It was a signal that maybe we were done for this day. It would be a Bologna picnic night in!

Did you walk up and down San Luca porticos?  Wasn’t the view of Bologna from on high worth the trip? 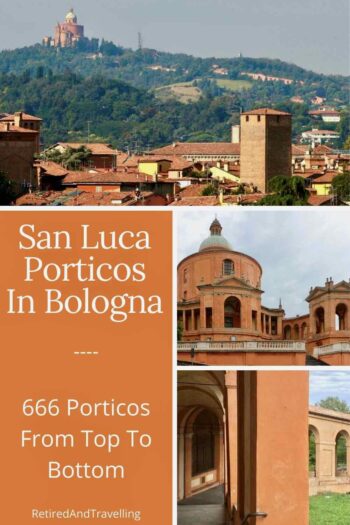 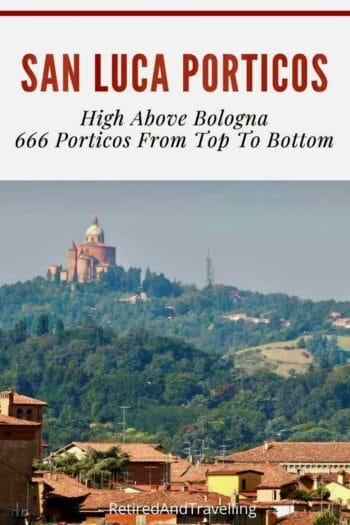