Hike The Skookumchuck Rapids In Egmont On The Sunshine Coast BC

The hike in was a bit challenging. But we sure enjoyed watching the rapids at high tide. The kayakers and surfers had so much fun as we watched. It was worth following the weather and tide schedules to visit at just the right time.

On our last day trip to the Sunshine Coast, we meandered up along the coast to Egmont and discovered the path that led to the Skookumchuck Rapids. It was late in the day when we arrived that day so we did not hike in. But just looked at the views from the marina. 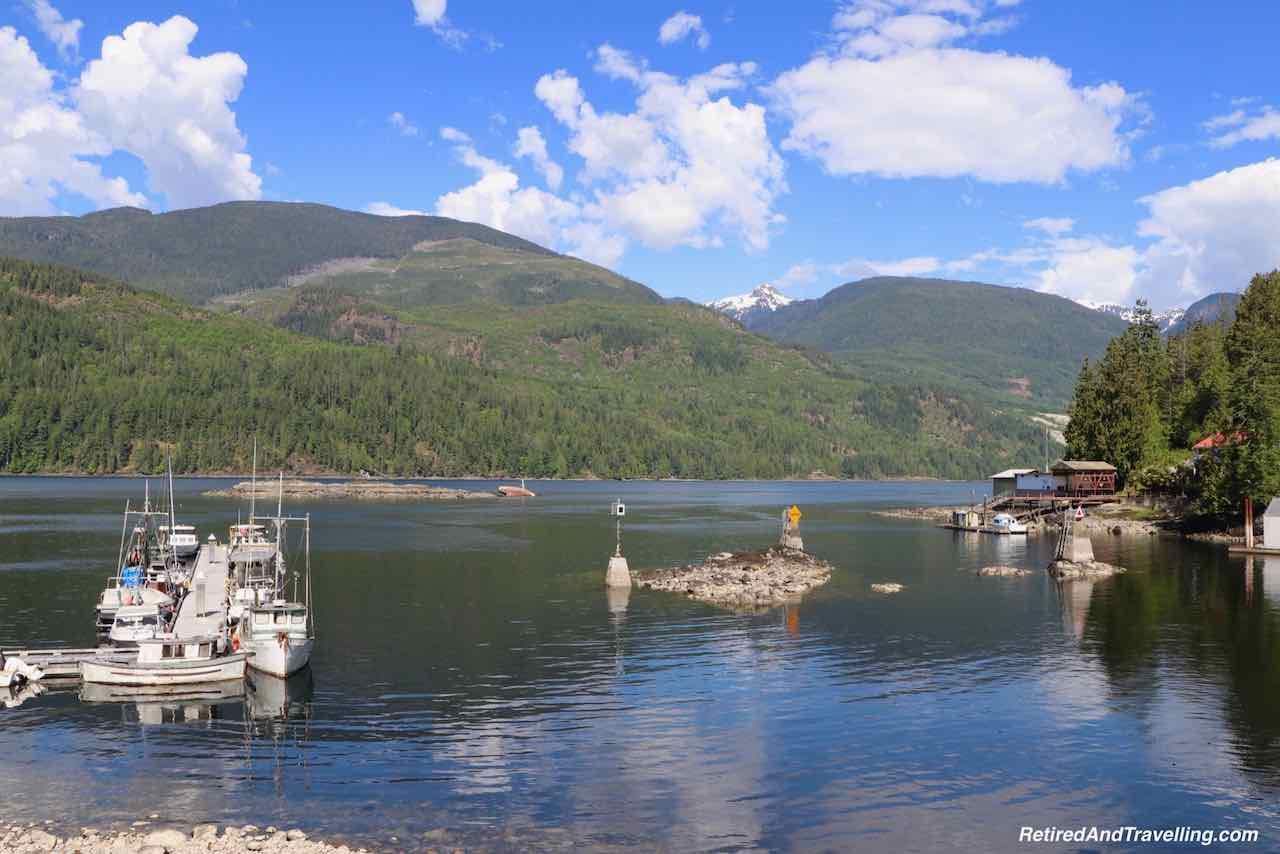 When the sunny day coincided with the highest tide range, we knew what our plan was for that day. The Skookumchuck Rapids were an outdoor adventure on the Sunshine Coast we did not want to miss.

The drive north to Egmont from Sechelt was about an hour. Although when we travelled on the Sunshine Coast Highway, traffic slowed down considerably if we were on the roads at ferry times. We knew the hike in was at least a full hour for us. So we planned our travel with enough time to ensure we hit the rapids at the exact right time.

We parked at the path entrance and headed off. The hike was about 4 km each way. When we did our research, people said it took about 45 minutes to the rapids. We expected part of the path to be rough so we wore hiking boots and I took my hiking poles. We were sure glad we were prepared! 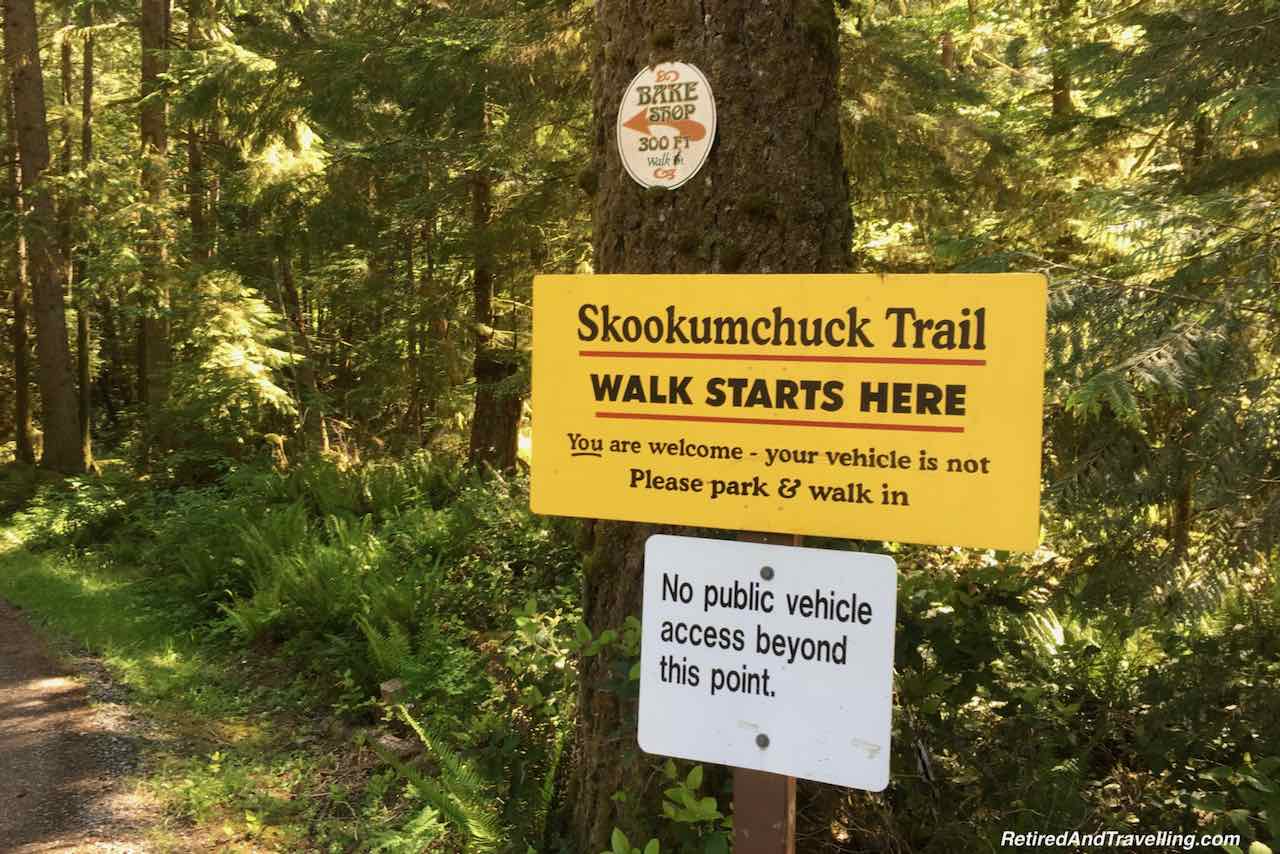 The first part of the walk was along the Doriston Highway dirt road before it went into the forest. Through the trees we saw the Bathgate Marina. We passed the Skookumchuck Bakery and Cafe deep in the woods. And even though the online times suggested it should be open, on this second visit it was again closed. 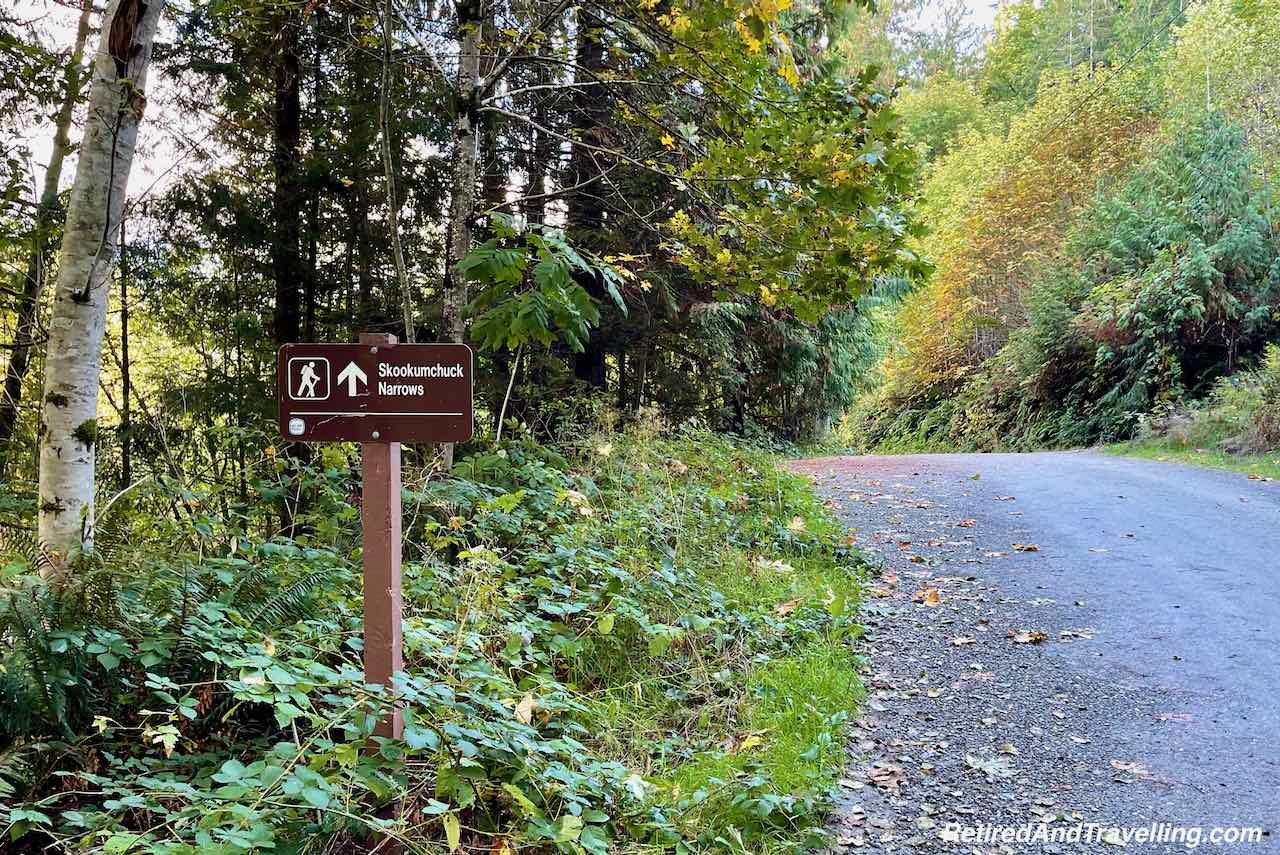 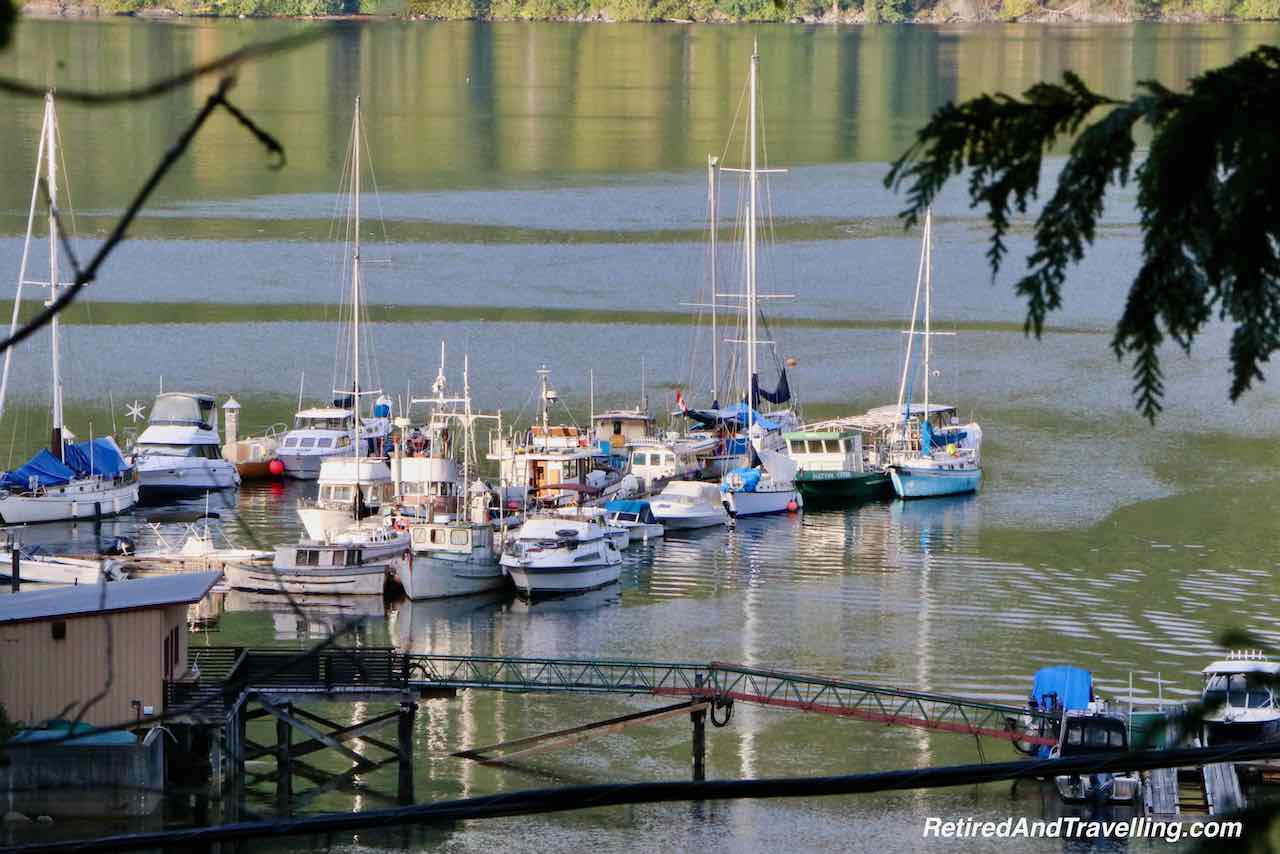 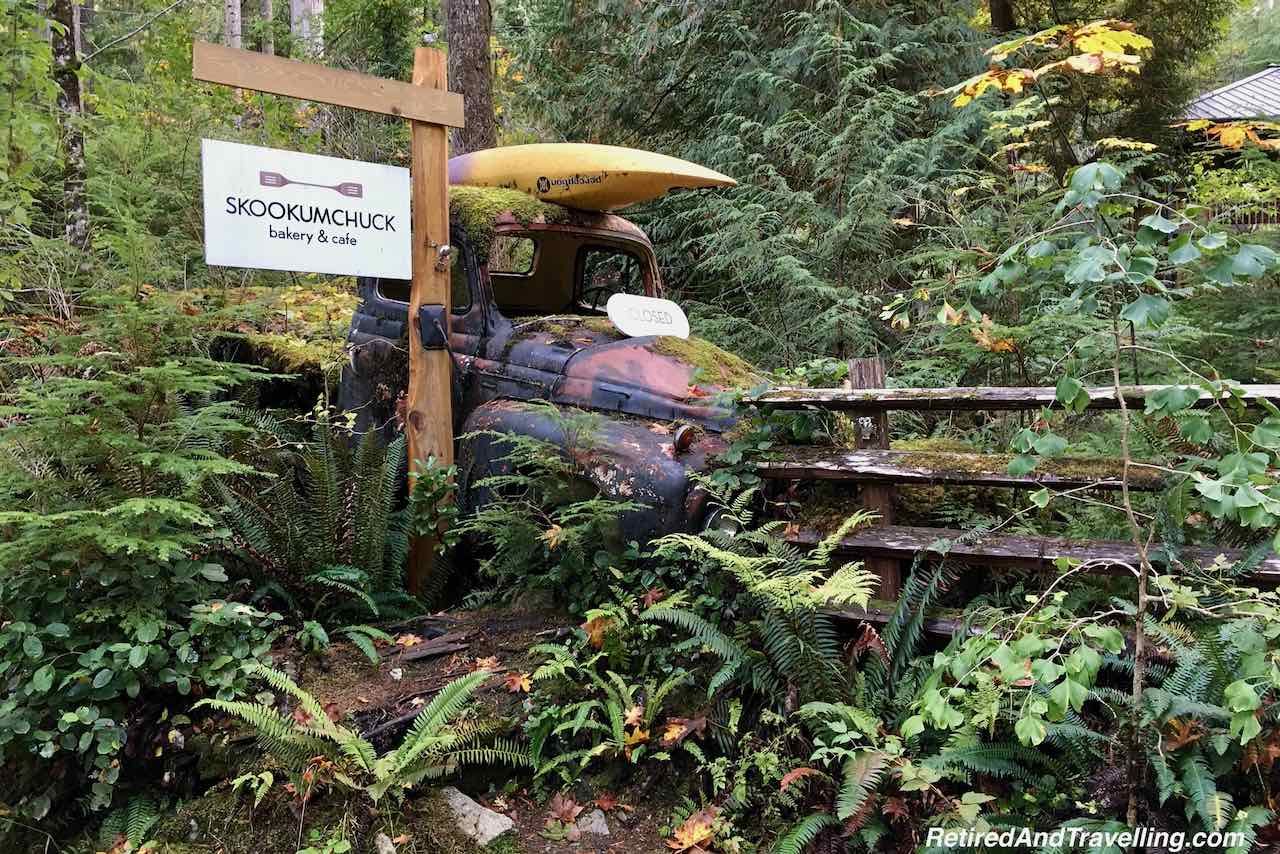 We entered the Skookumchuck Narrows Provincial Park at the end of the road. Slowly the path started to go up and down. Rocks and roots covered the path. It was a quite scenic hike at this point. 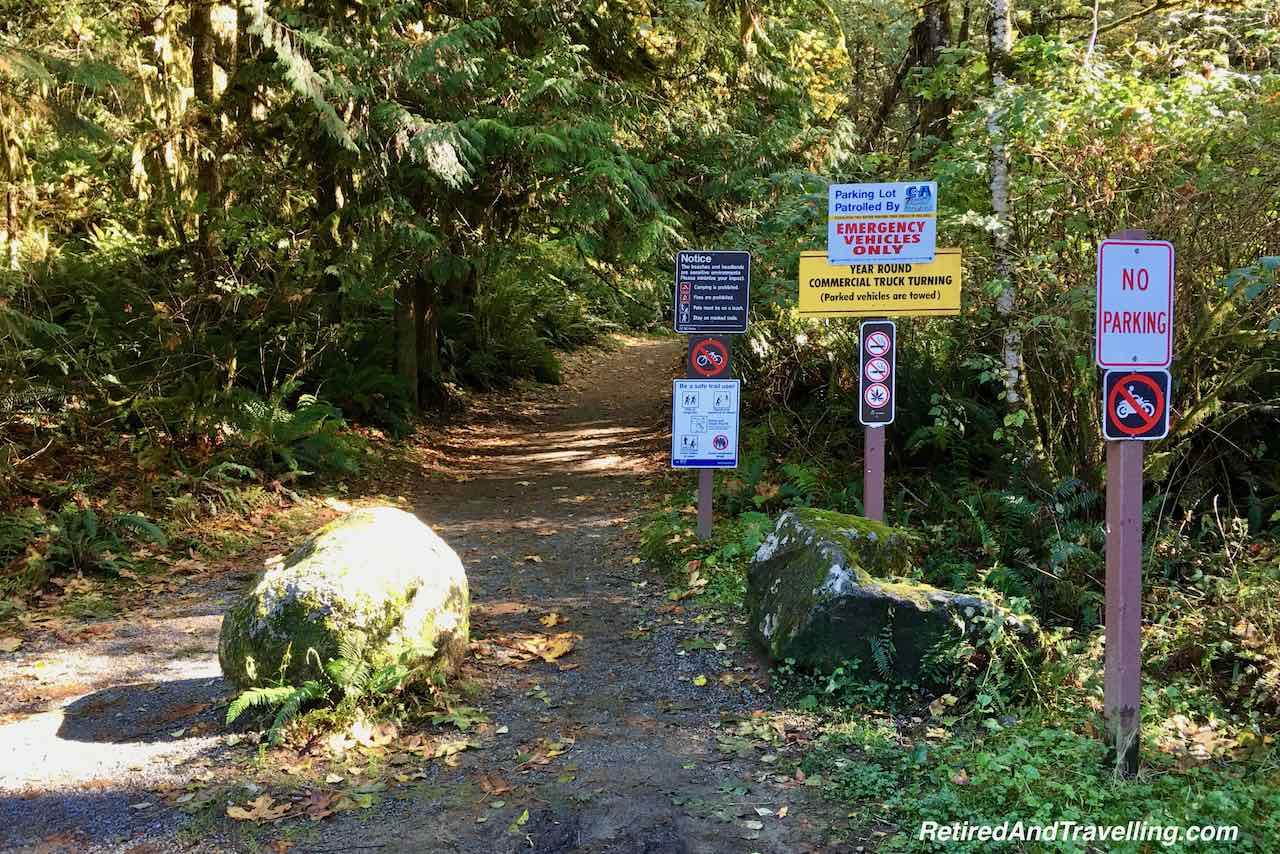 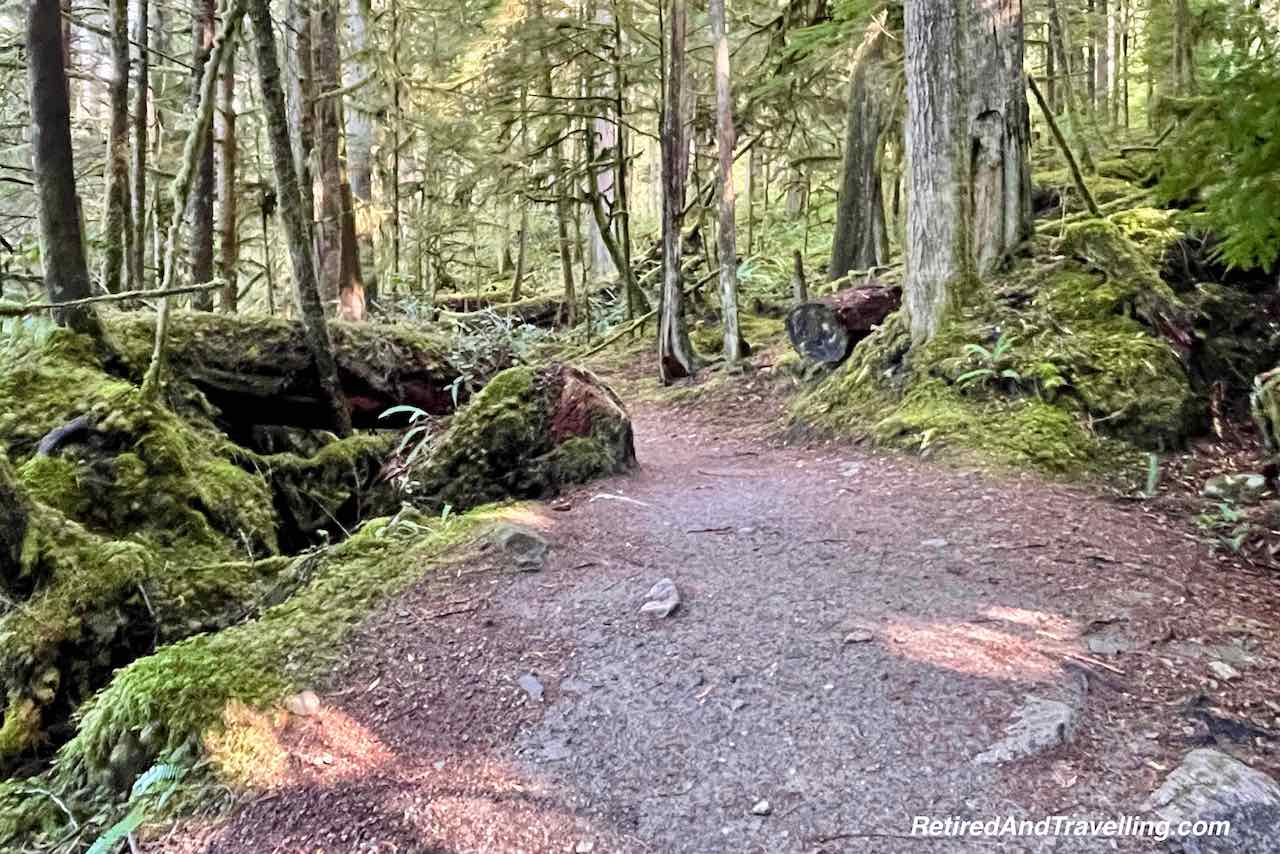 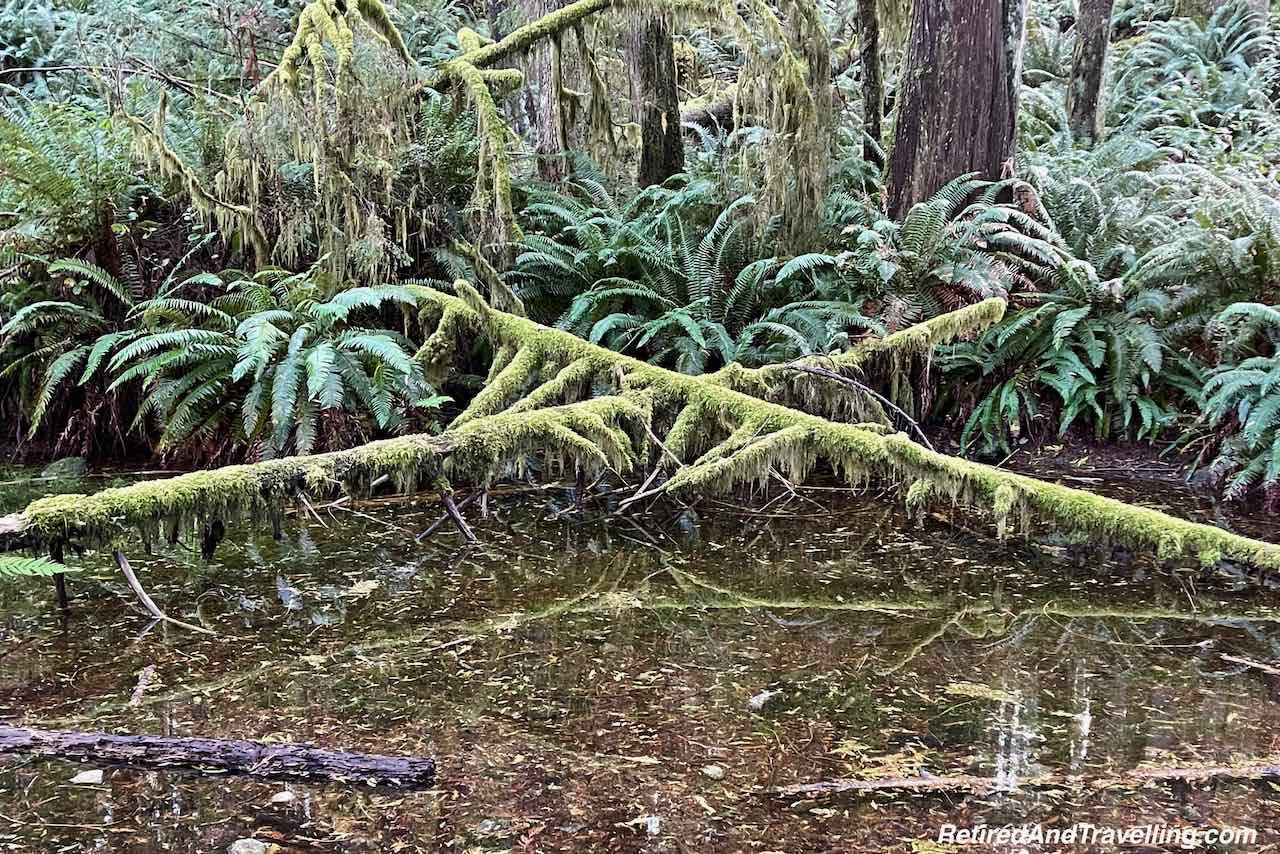 Through the trees we got a view of a tranquil bay of water. And then we came out at Brown Lake. We stopped and enjoyed this peaceful setting before we trudged on. 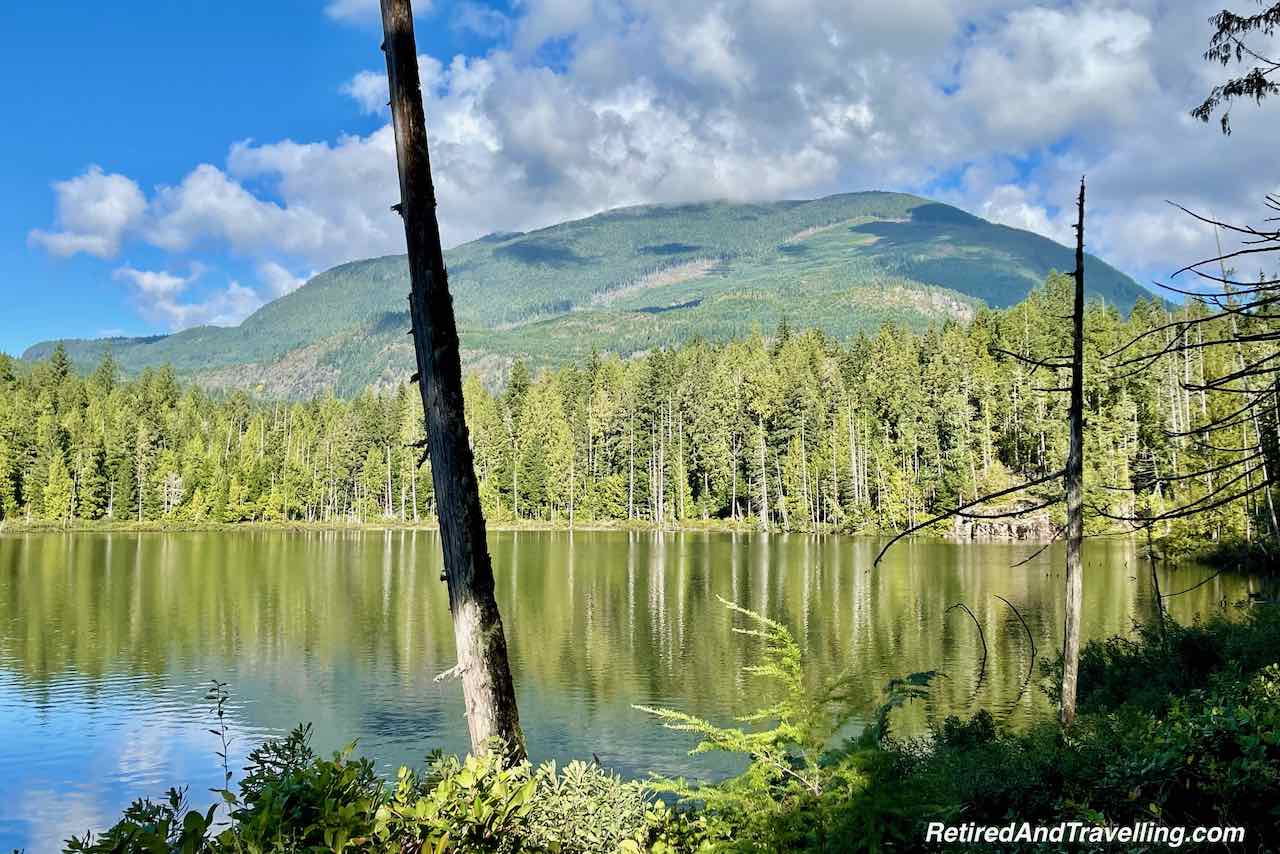 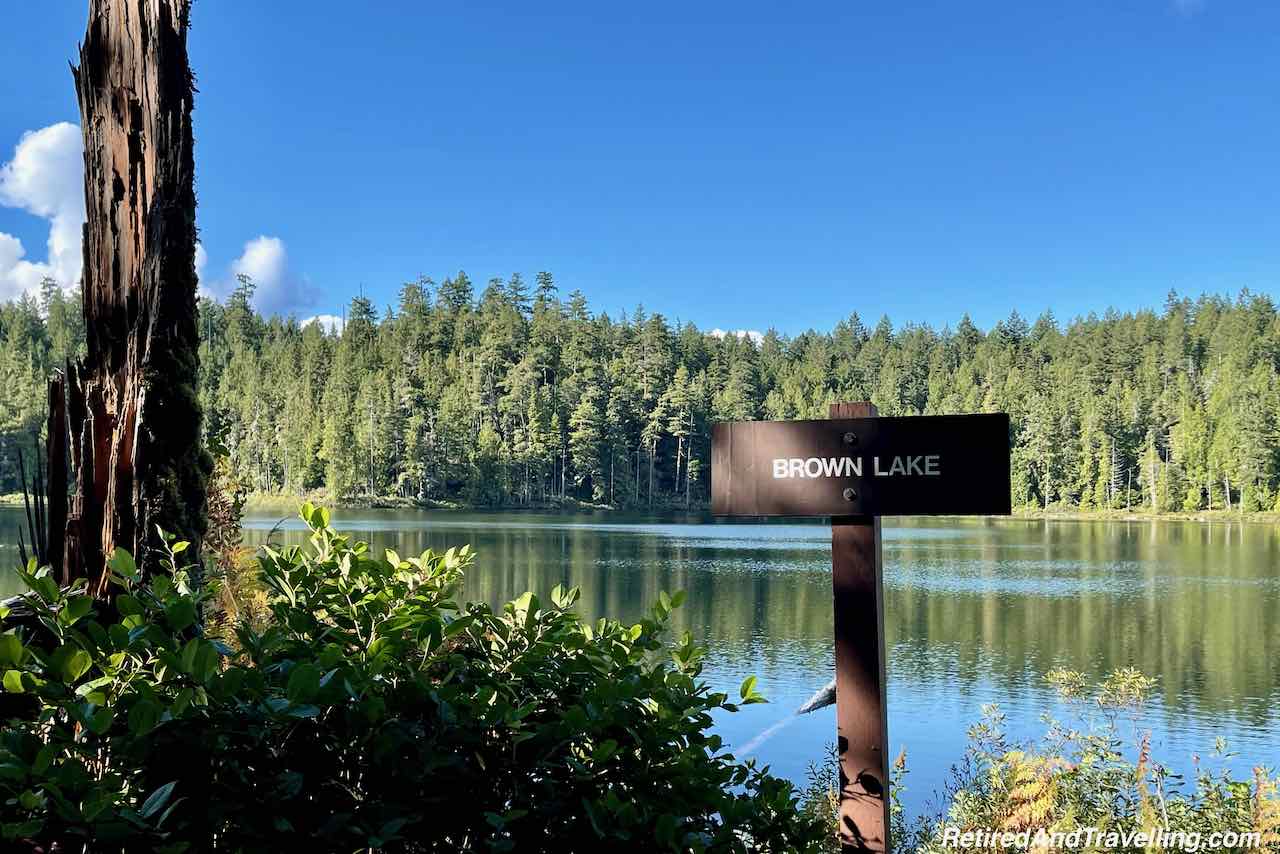 This first part of the Skookumchuck Rapids in Egmont proved to be a bit deceiving. But when we saw the AED Emergency Defibrillator mounted on a pole, we knew it was not easy for everyone! 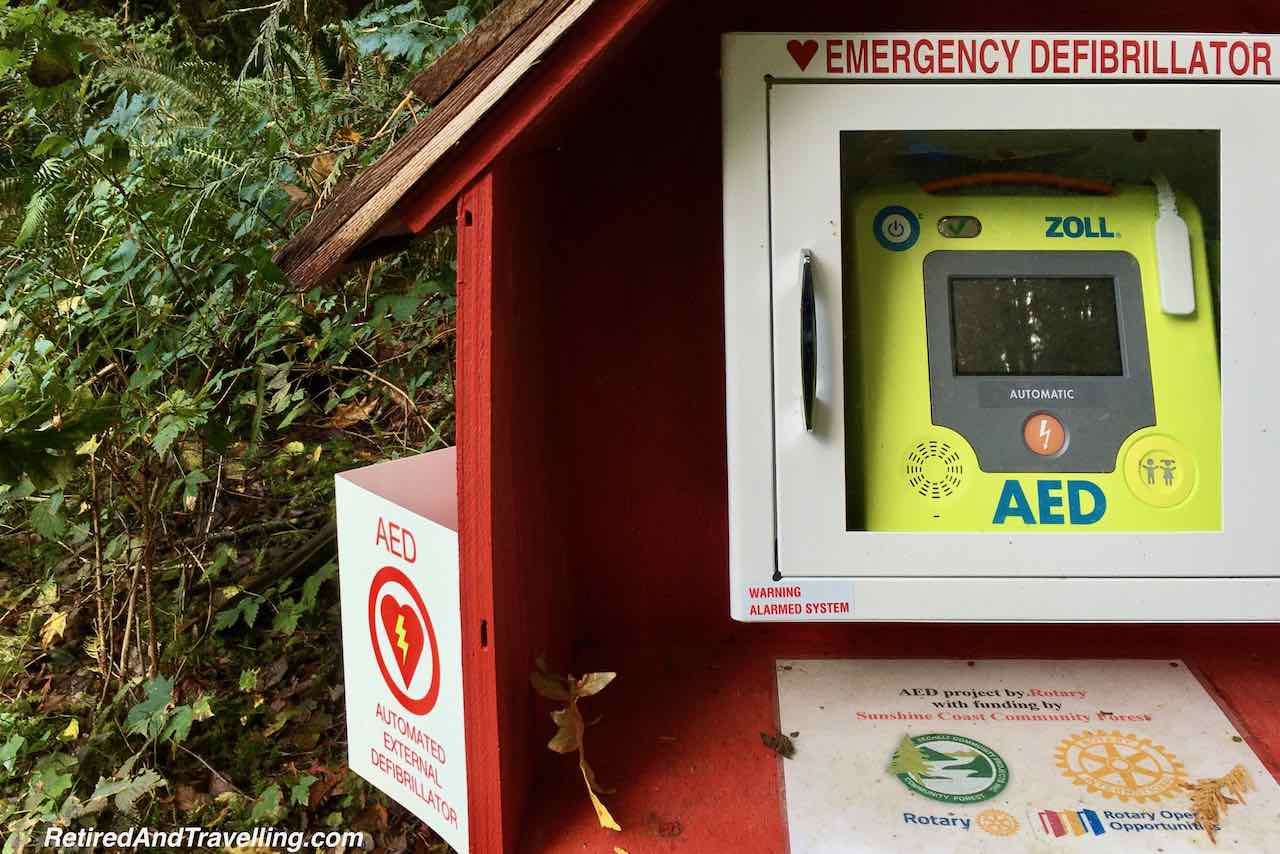 But which viewing point made sense depended on the timing of our visit. When there was a flood tide with high waters, Roland point provided great views. But when there was an ebb tide, North Point is the better selection. The tide charts with timing are all available online. 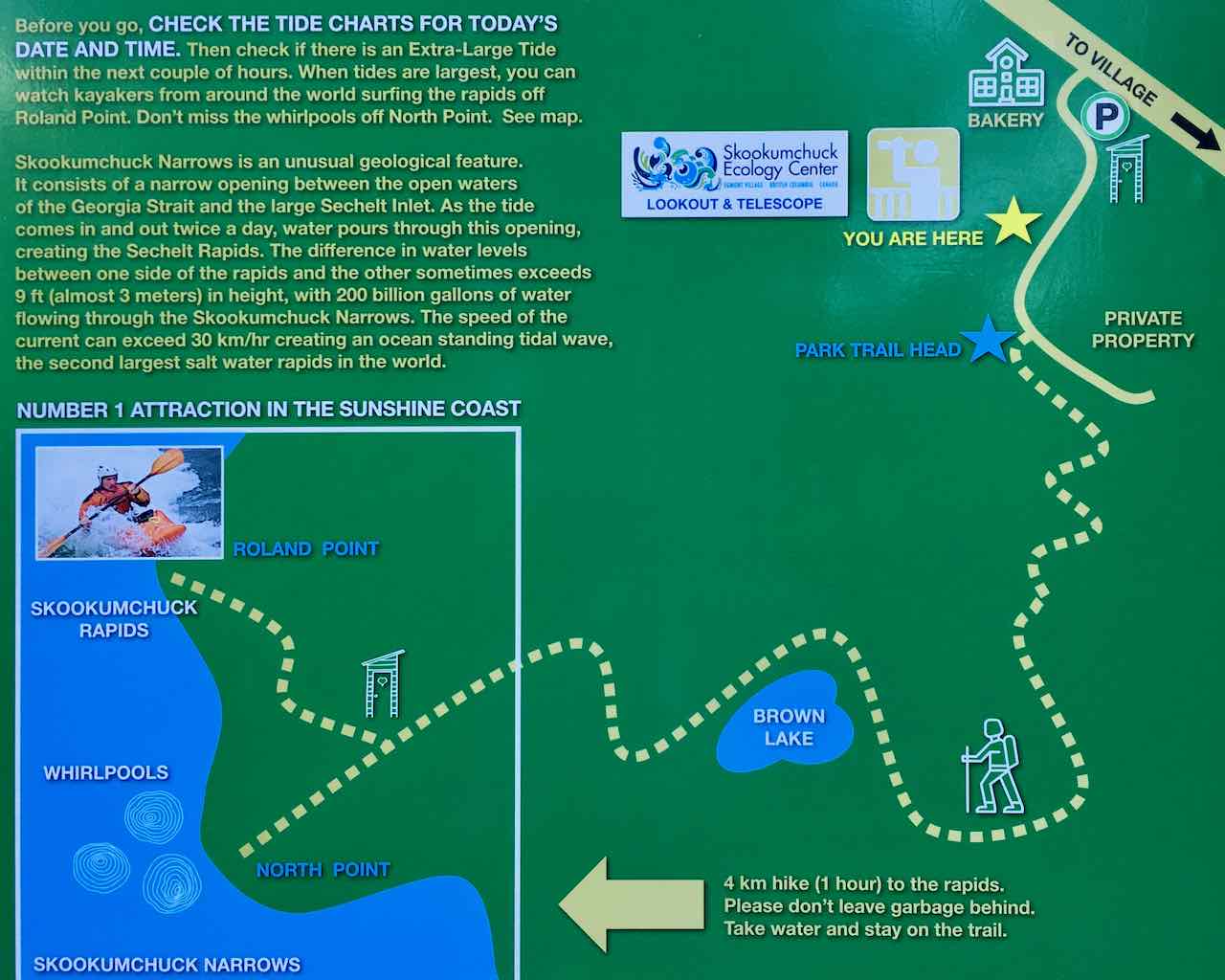 When we reached about the 3km point, the two path options were available. On this hike we timed it for a flood tide so we headed towards Roland Point.

Two of our children hiked to the Skookumchuck Rapids. They admitted it was not a beginner hike. But felt sure we could handle it. From this point on, the going became much tougher, the climbs and drops were steeper and the path much rougher. At this point we sure hoped the effort would be worth it. 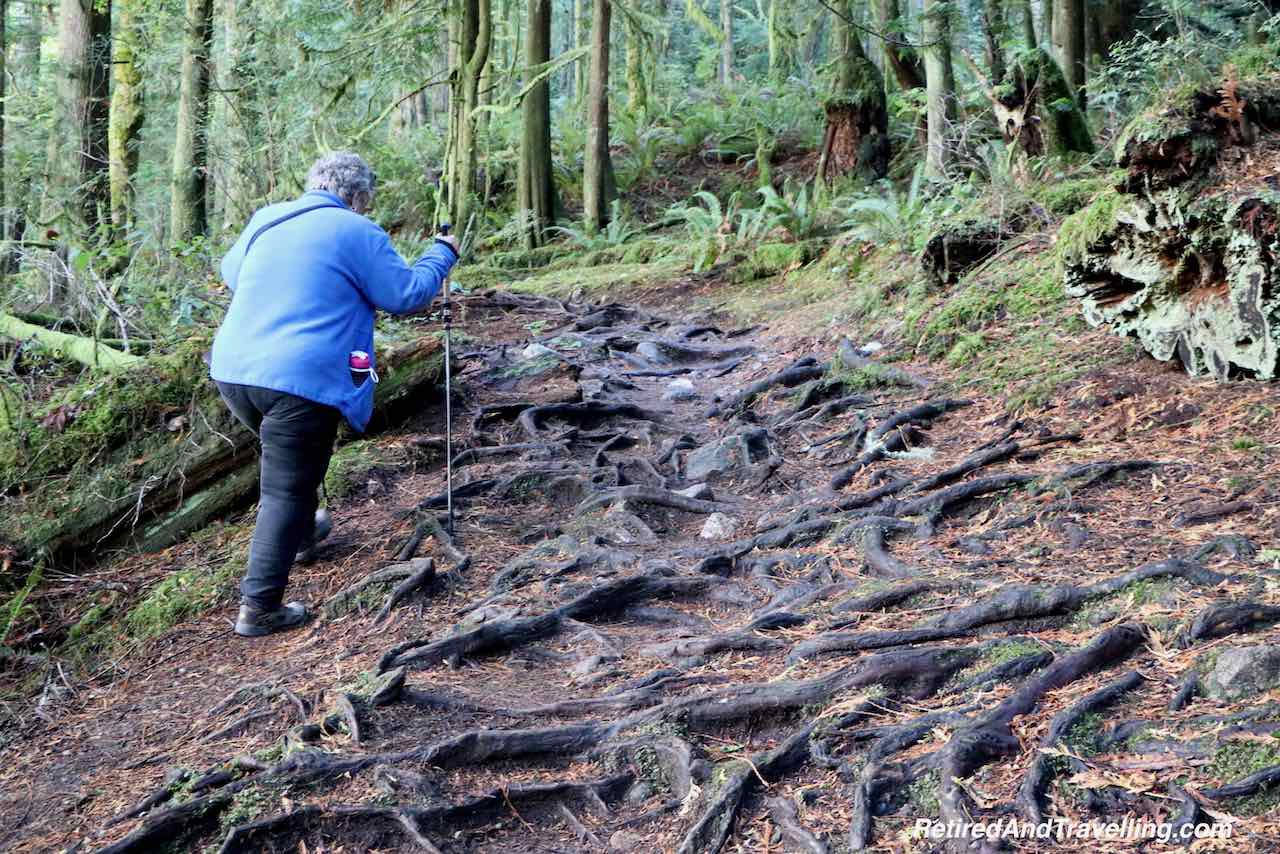 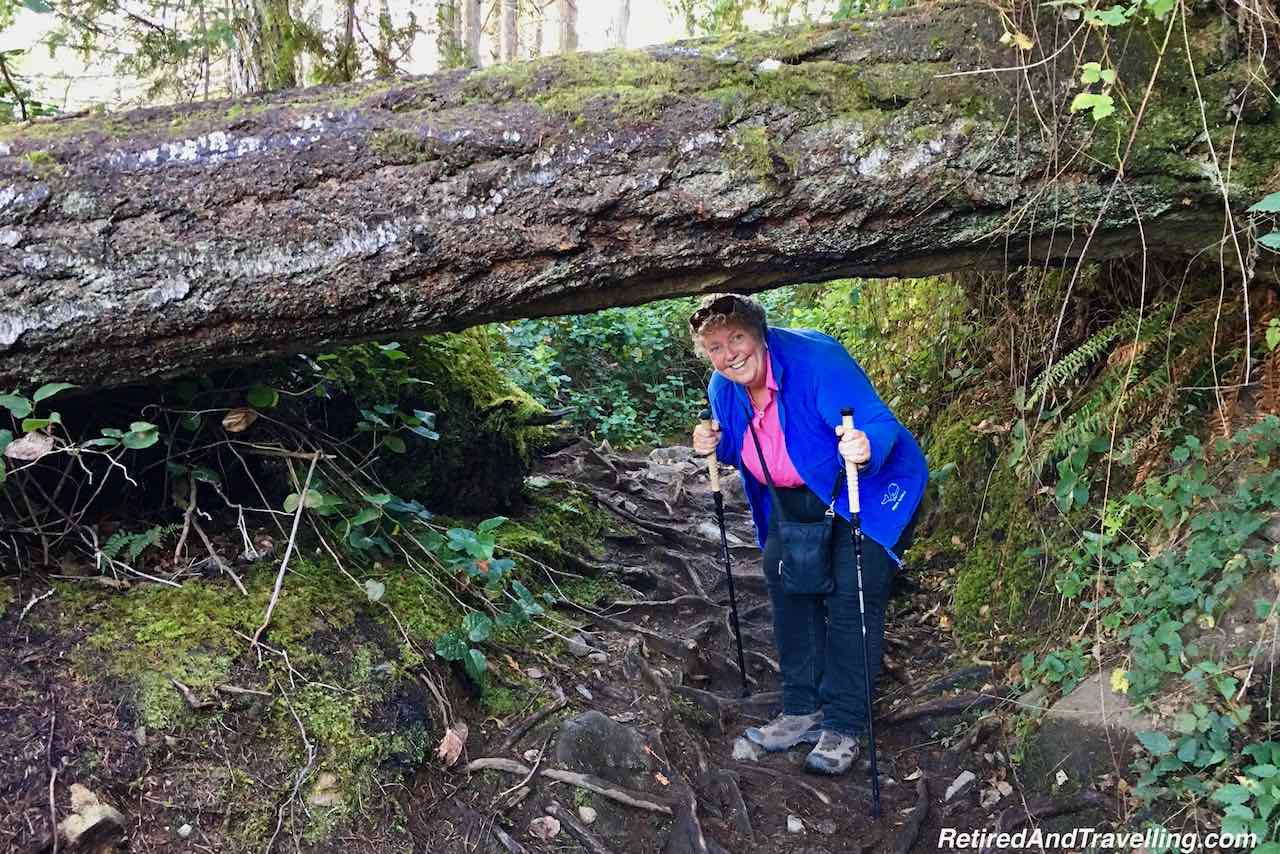 It took us well over one hour. But the path finally came out at a rock outcropping. Right in front of us we saw the high waves at the tide point. 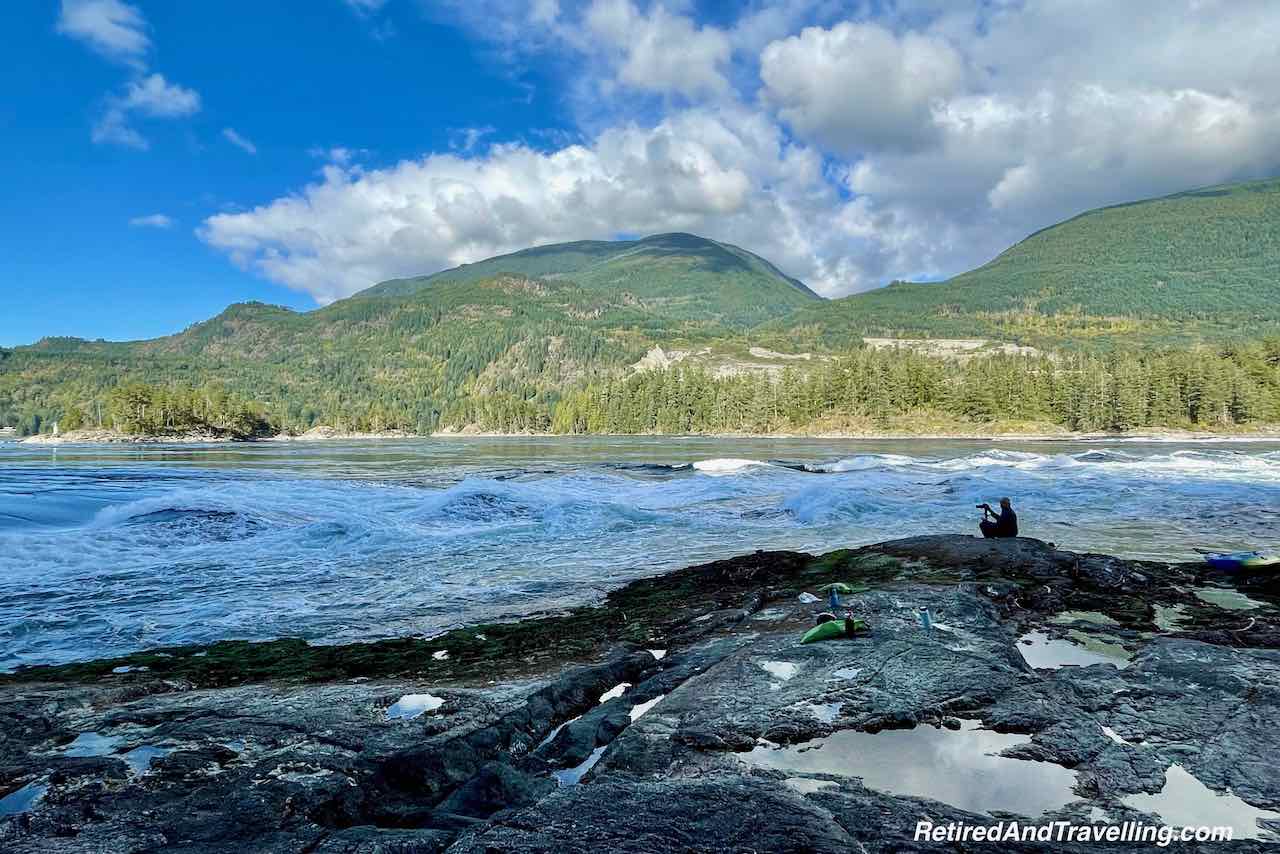 Fun At The Rapids

We settled in to enjoy the view of the rapids. It was obvious where the tidal change in water flow was. We spotted first a surfer and then several kayakers as they rode this wave. 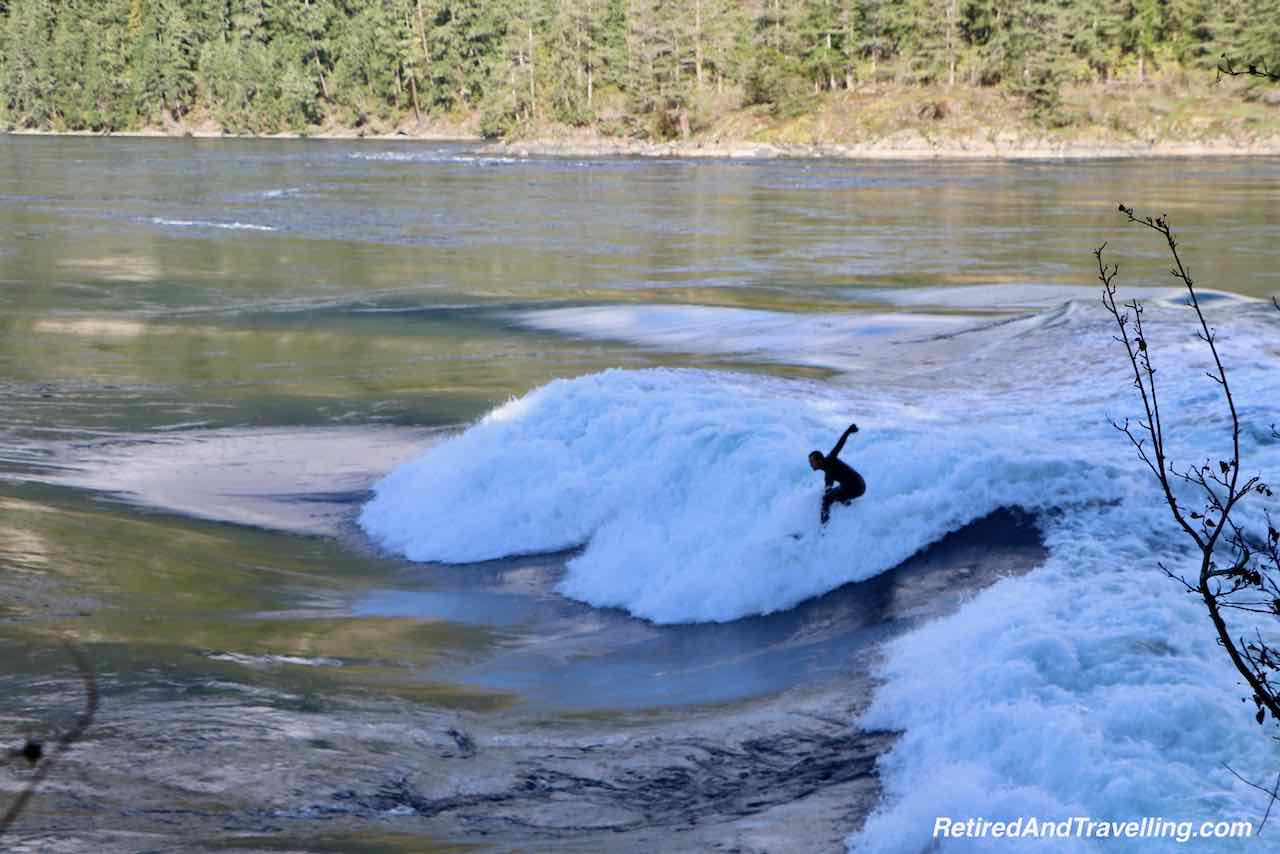 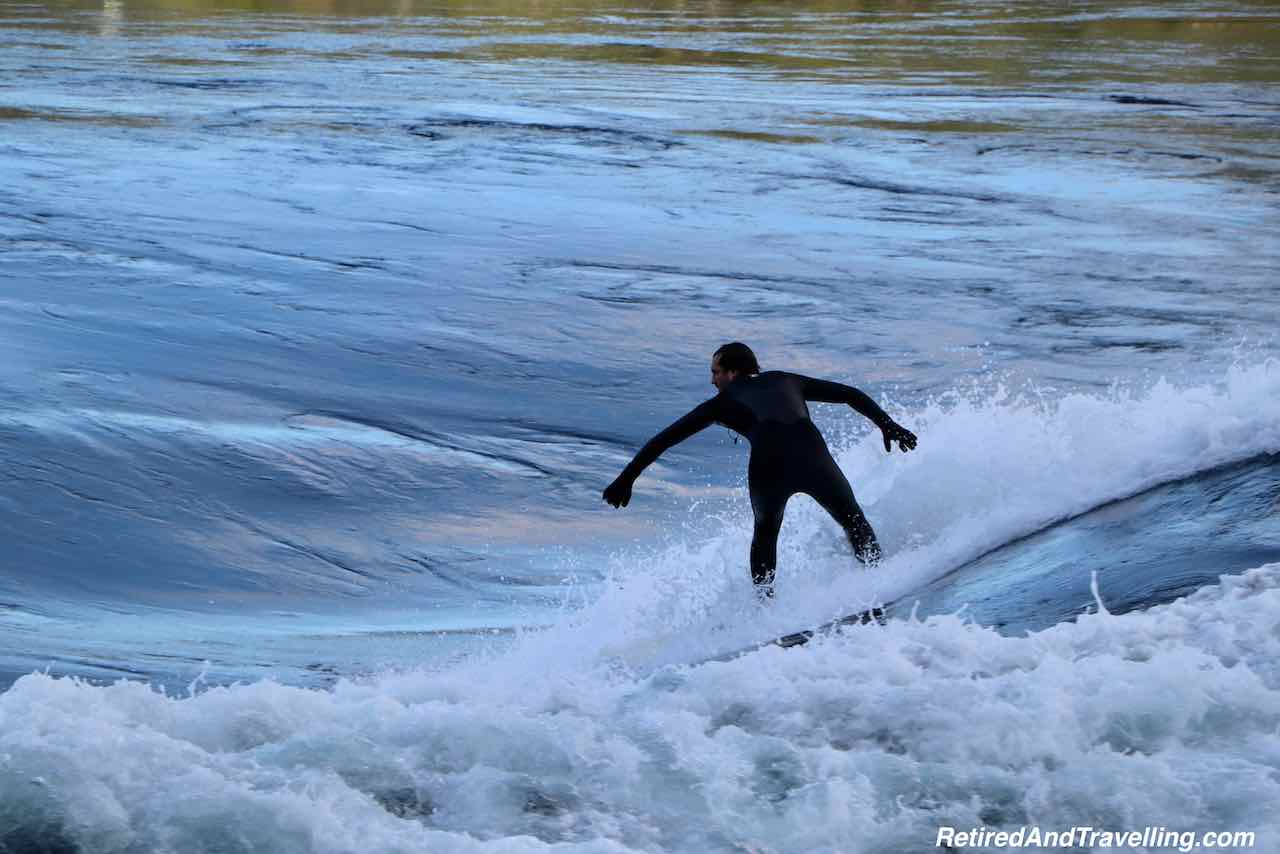 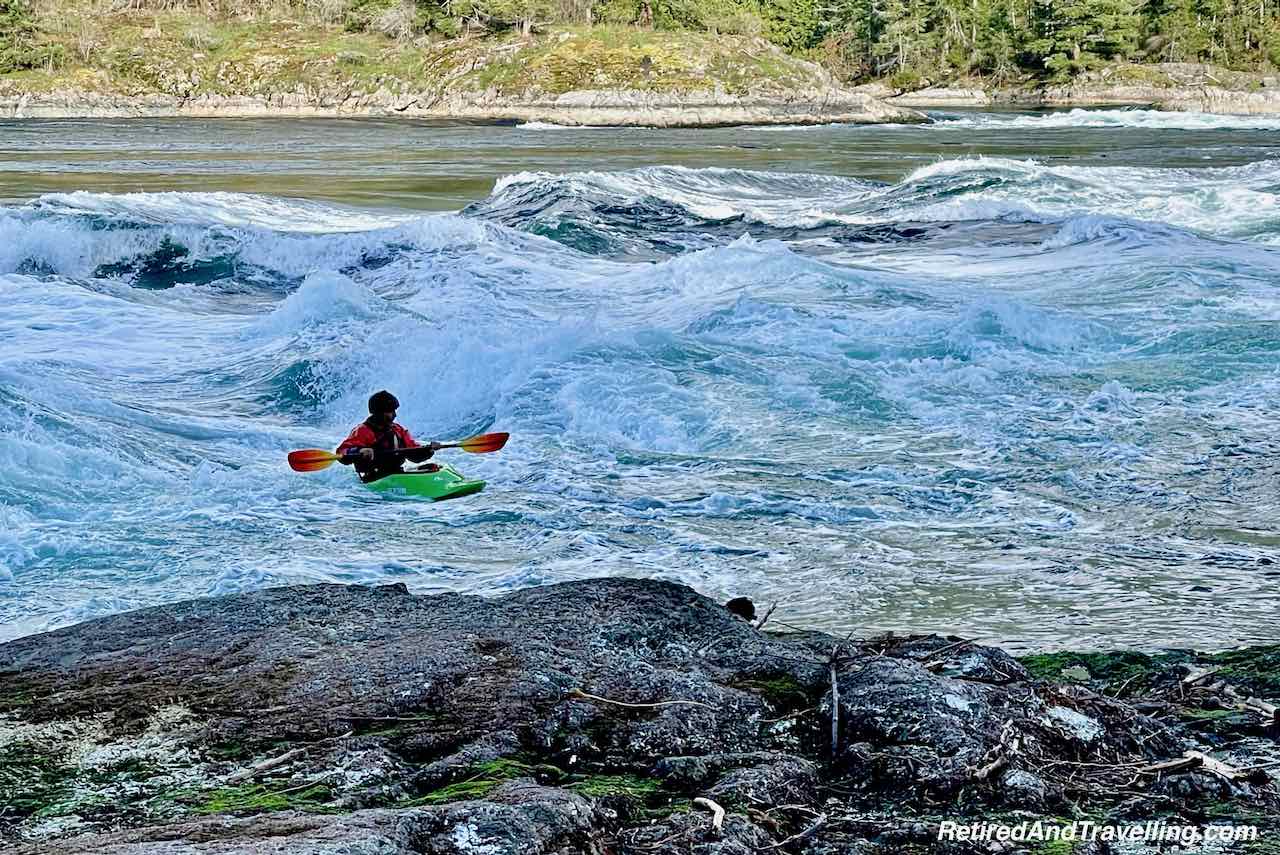 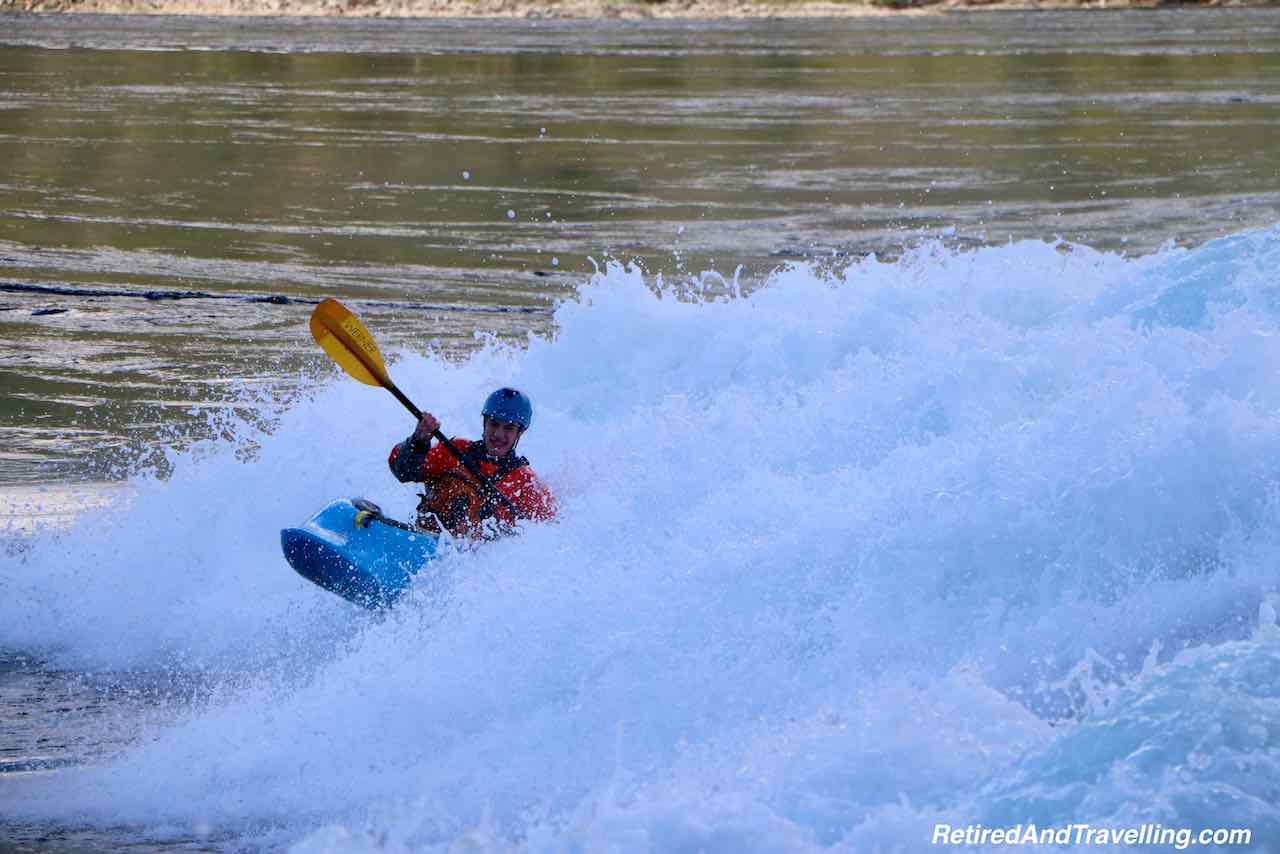 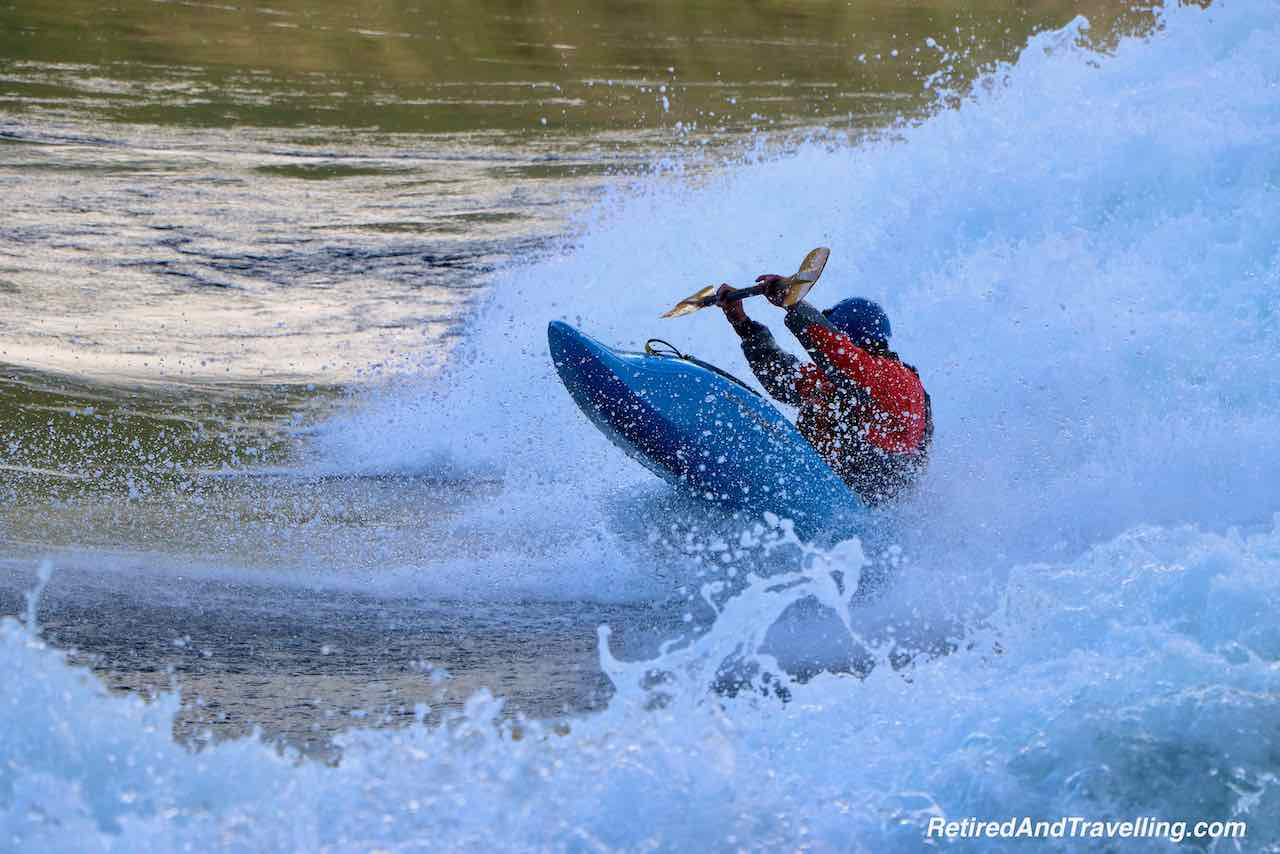 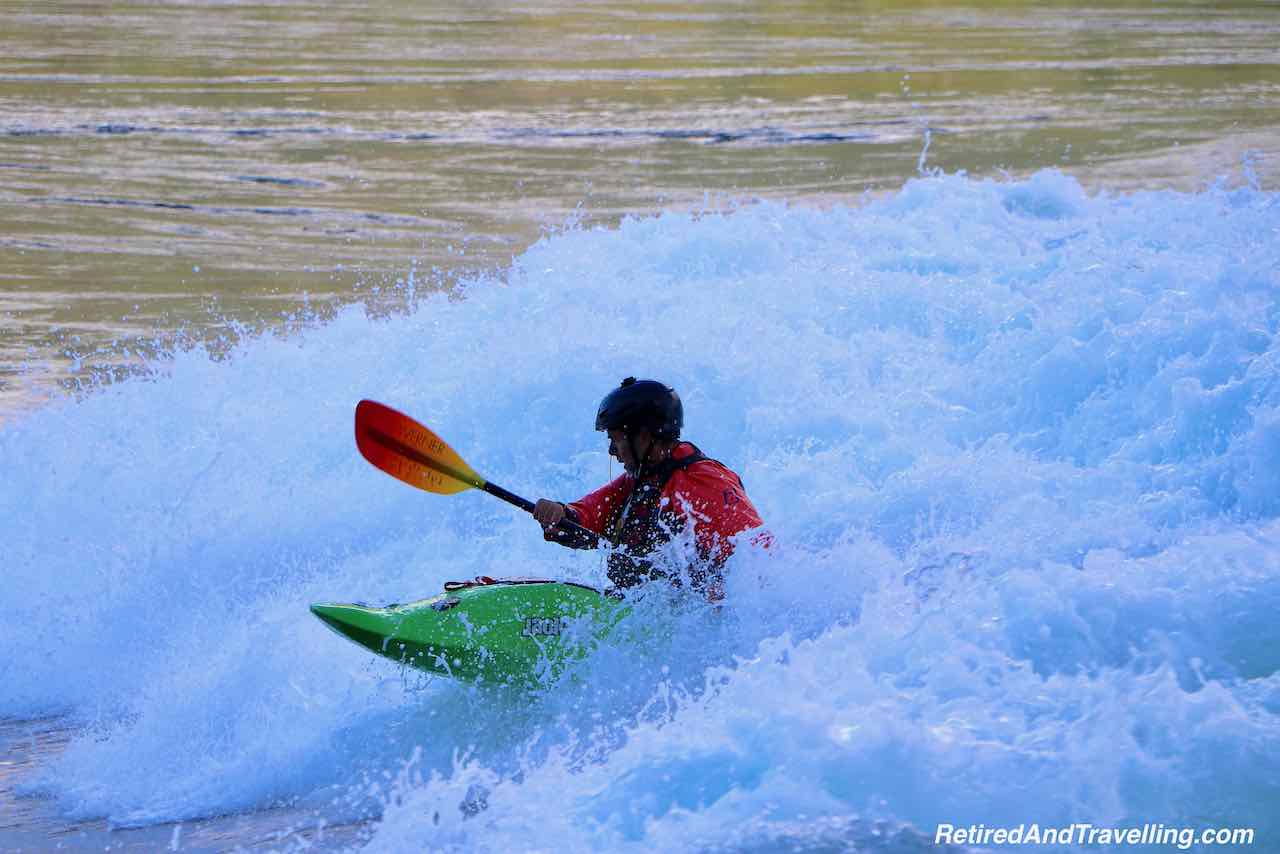 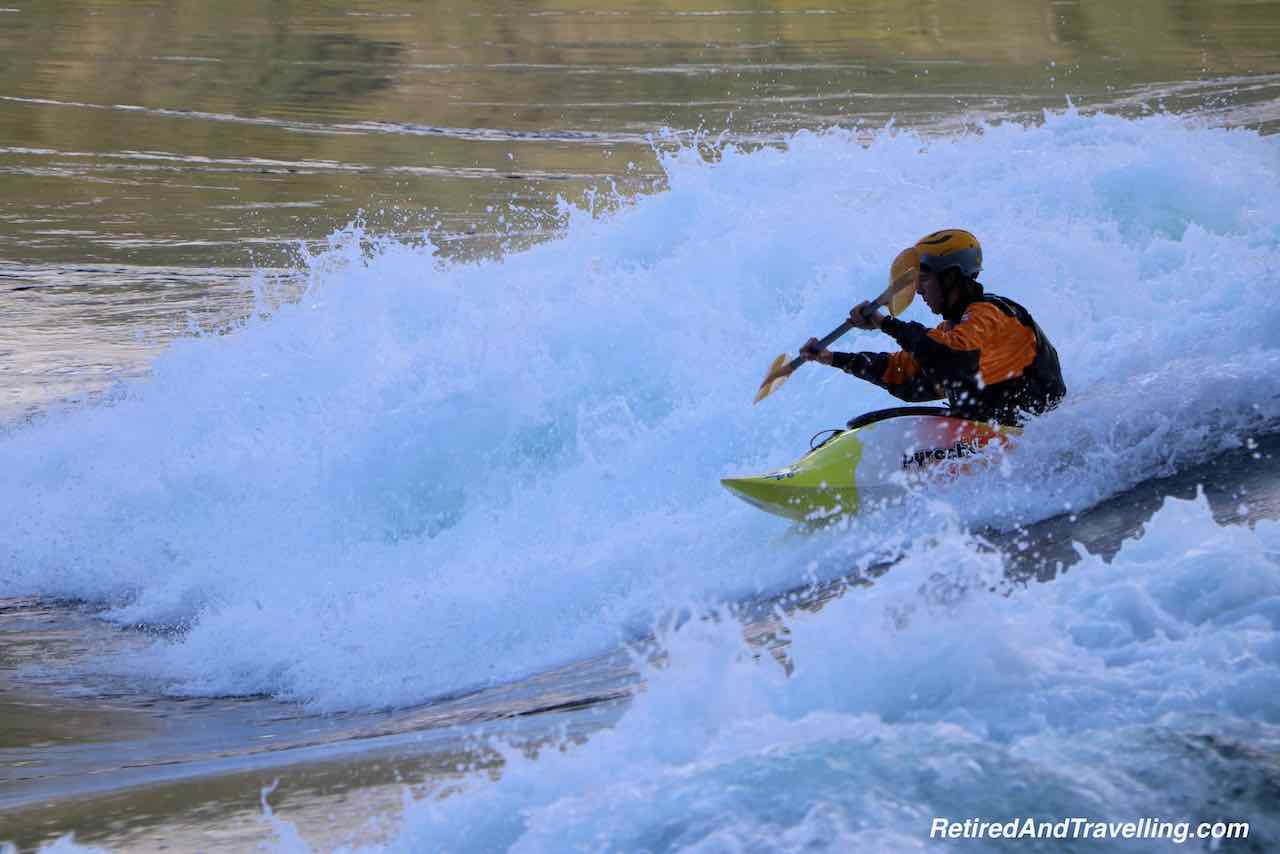 The waters continued past the wave to rapids out in the middle of the river. Several of the kayakers rode the water down to the rapids. We saw boats out on the water taking in the view from another perspective. 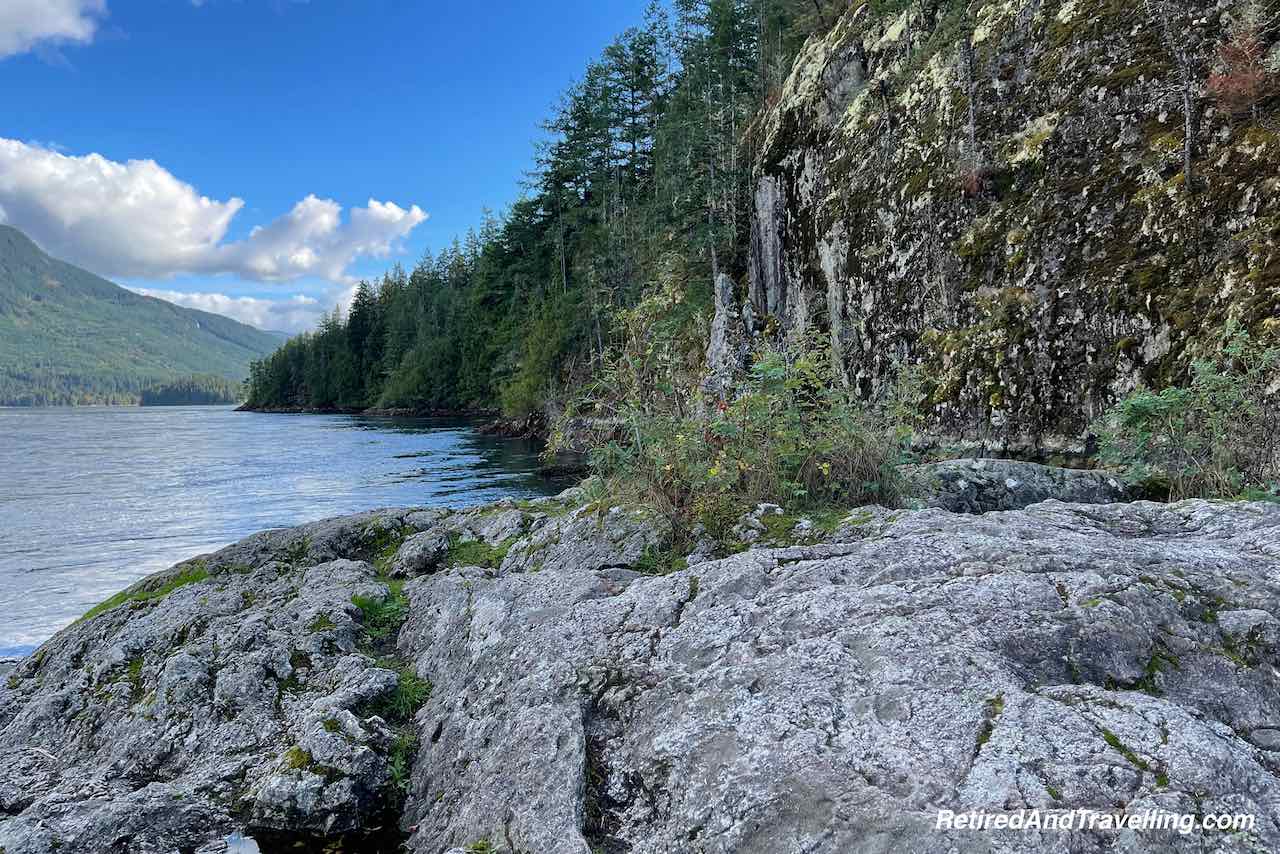 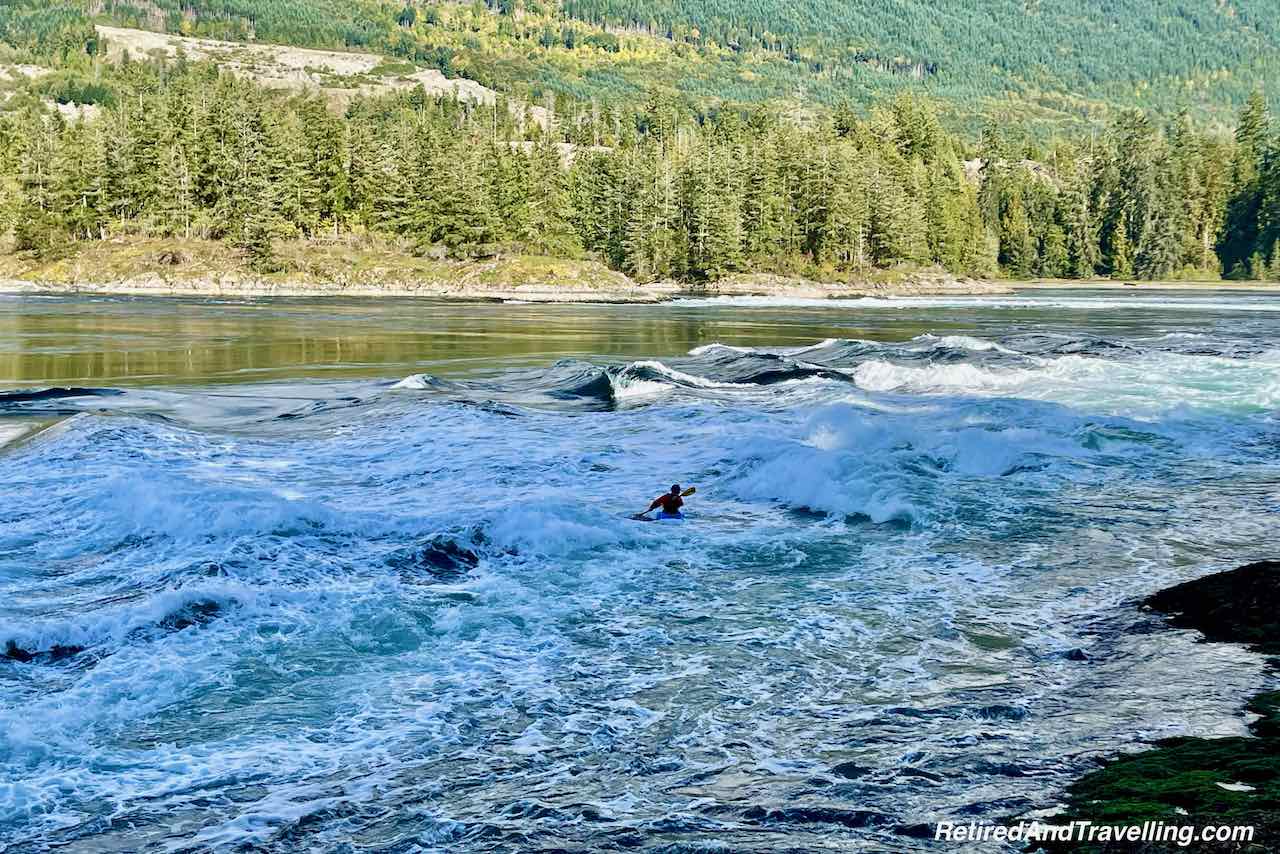 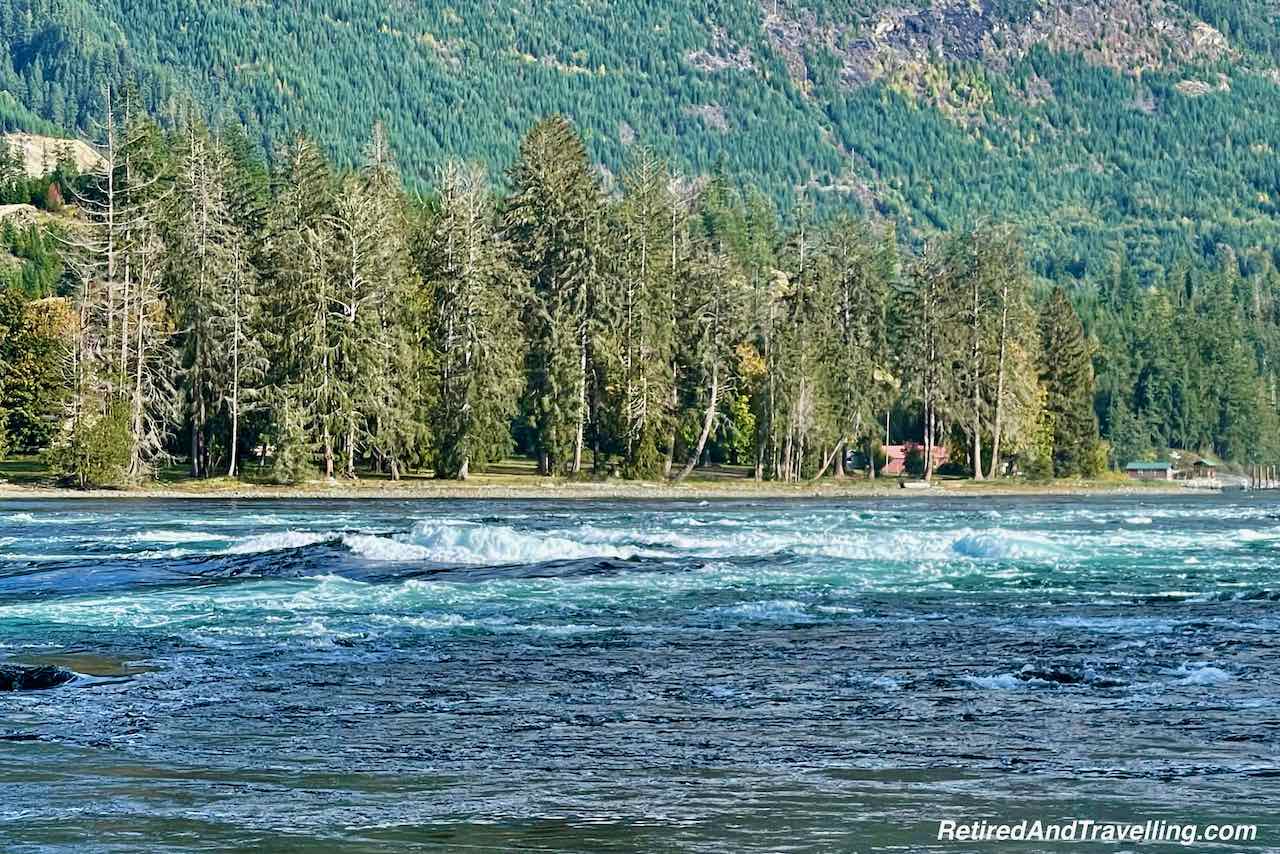 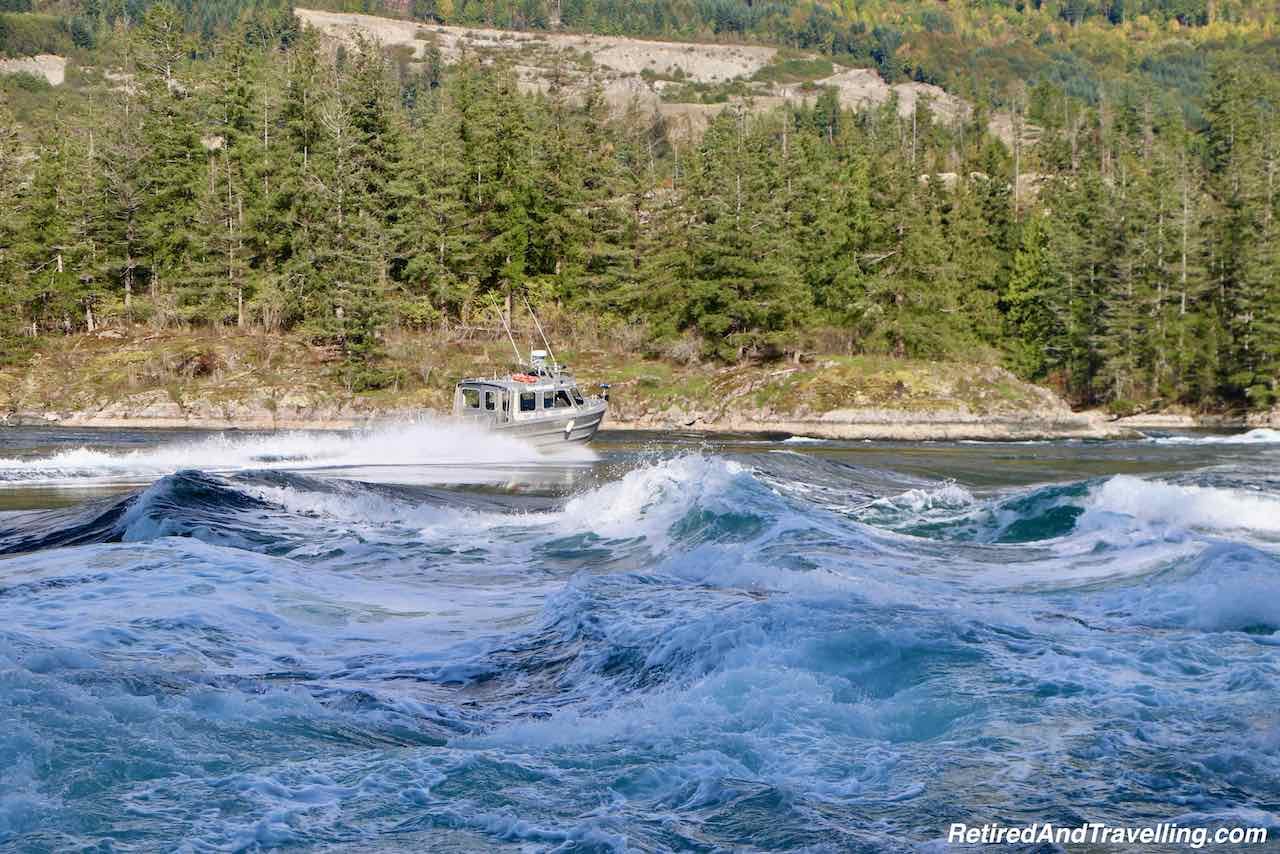 We sat and enjoyed the views of the Skookumchuck Rapids with the other people who hiked the path that day. When the water levels started to drop, we headed back on the path.

It was a harder and slightly slower walk back. We let out a sigh of relief when we hit the dirt road. Our car was not far away!

We were so glad we hiked to the Skookumchuck Rapids in Egmont during our stay on the Sunshine Coast in BC. It was definitely one of the fun outdoor adventures on the Sunshine Coast. Now that we know what to expect, we would definitely plan a return visit and take the path to the North Point viewing area for a different outdoor experience.

Have you visited the Skookumchuck Rapids in Egmont on the Sunshine Coast in BC? Did you plan it at the right time for a great show? 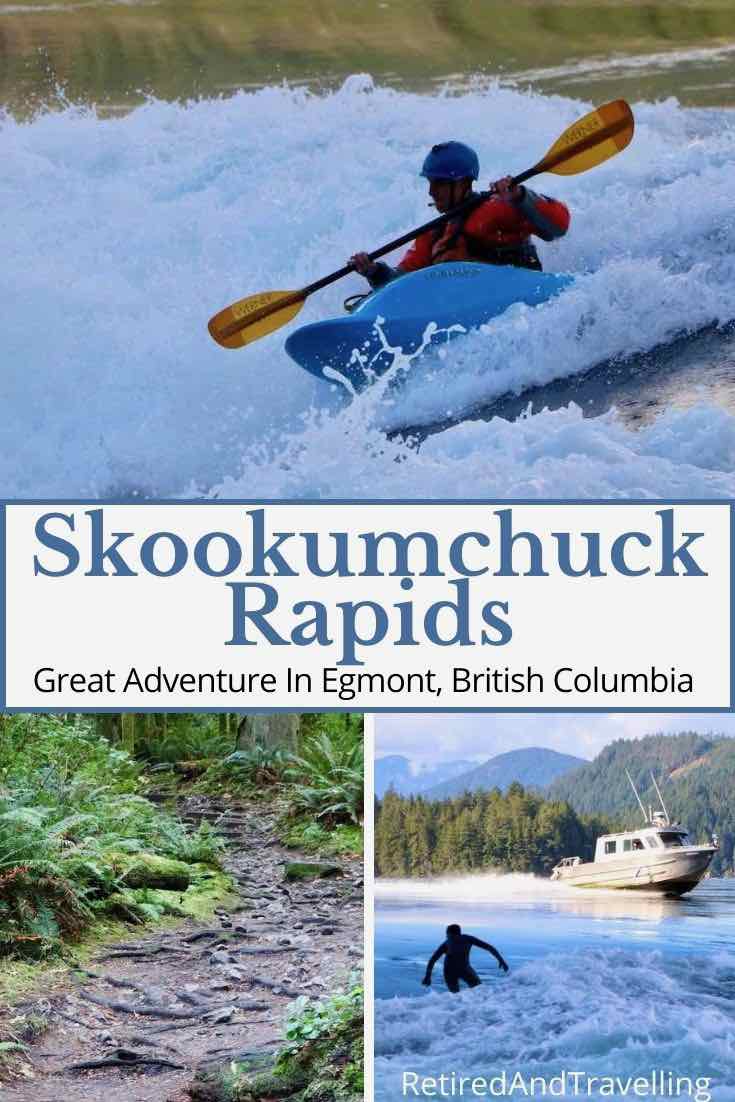 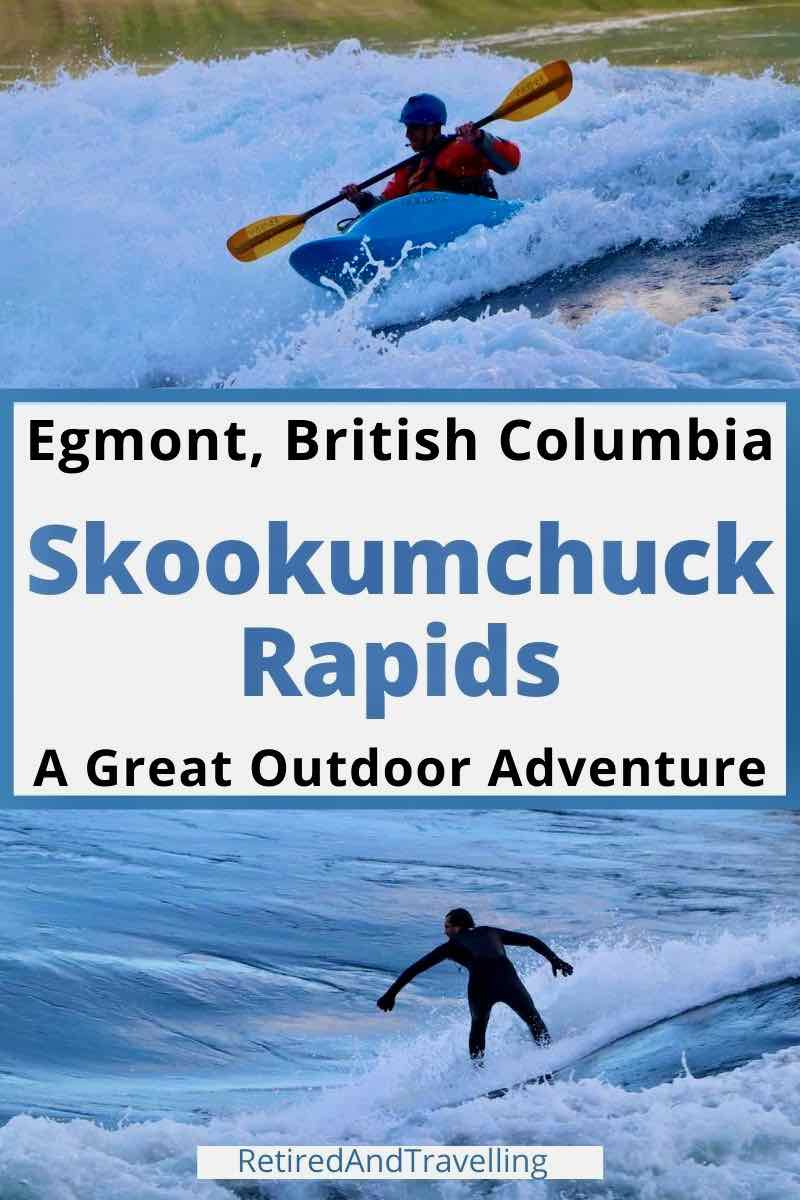 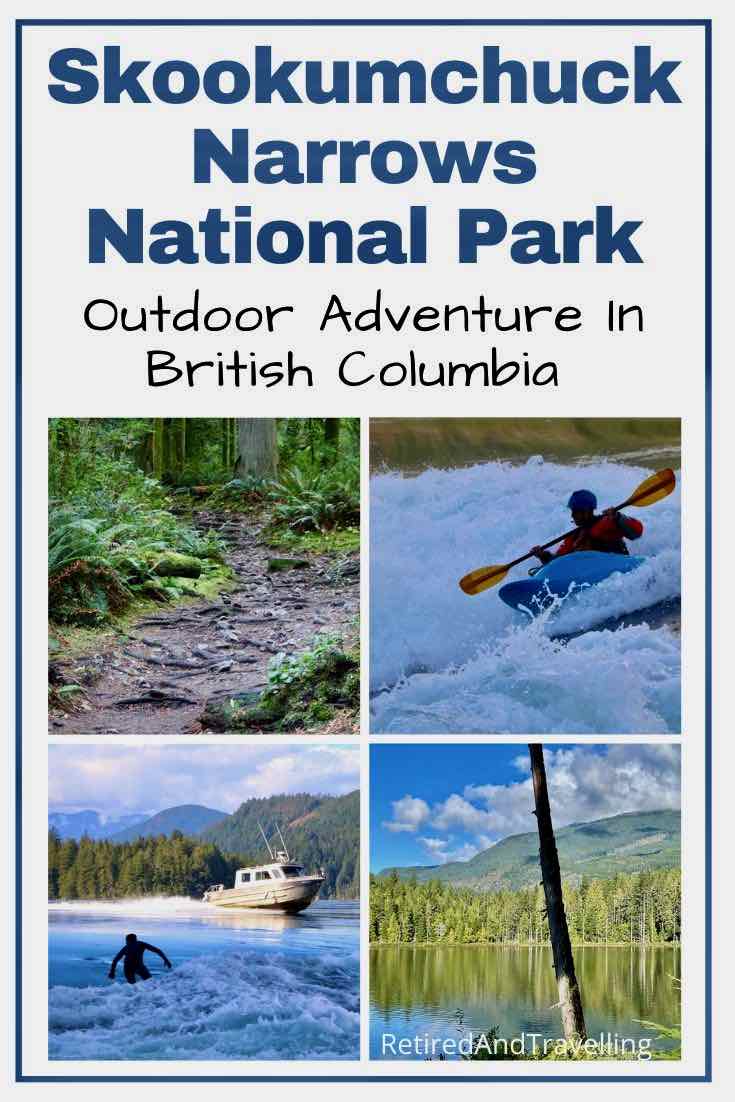 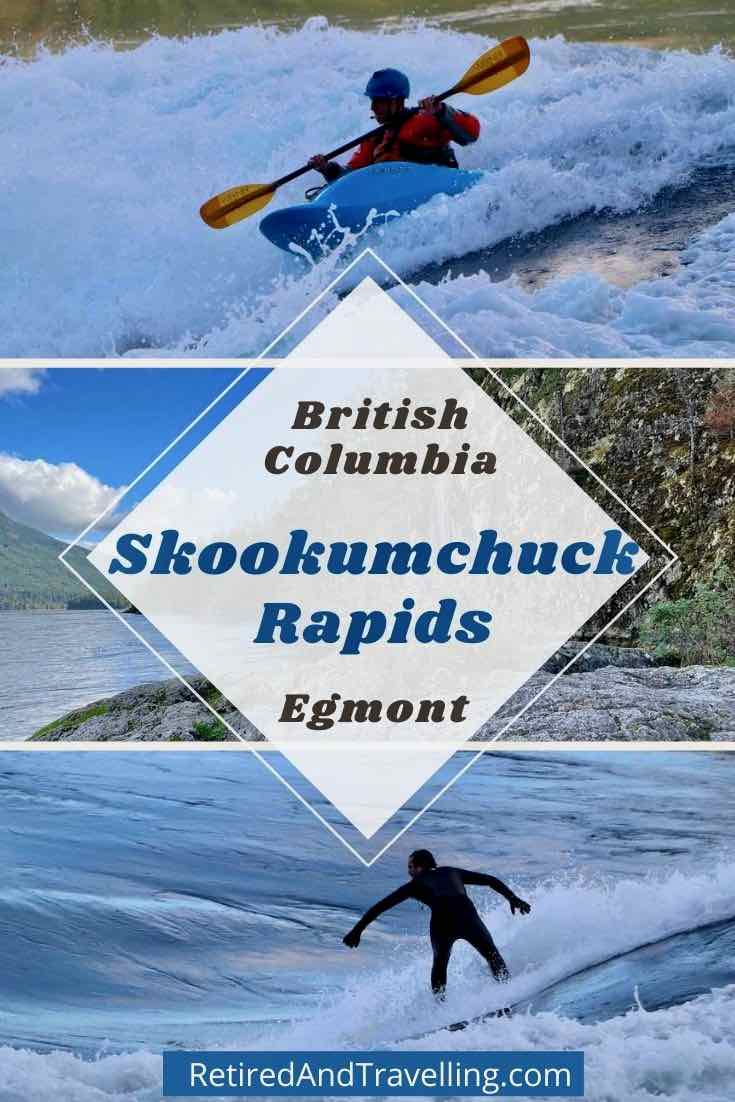