Even before we arrived, we knew we would visit Peggy’s Cove in Nova Scotia.  The iconic image of the lighthouse on the rock was a common stop for visitors to the east coast of Canada.

During our stay in Nova Scotia on this trip we used Halifax as a base.  There was a lot to do in the city.  But on a day trip down the coast towards Lunenburg we did not miss a stop in Peggy’s Cove.

The iconic lighthouse is often the key attraction for a visit to Peggy’s Cove.  But we found more than just the lighthouse!  A local museum provided insight into the “Peggy” behind “Peggy’s Cove”.  We loved the quaint, colourful village and port.  Local art was on display.  And we even visited the SwissAir Memorial site. 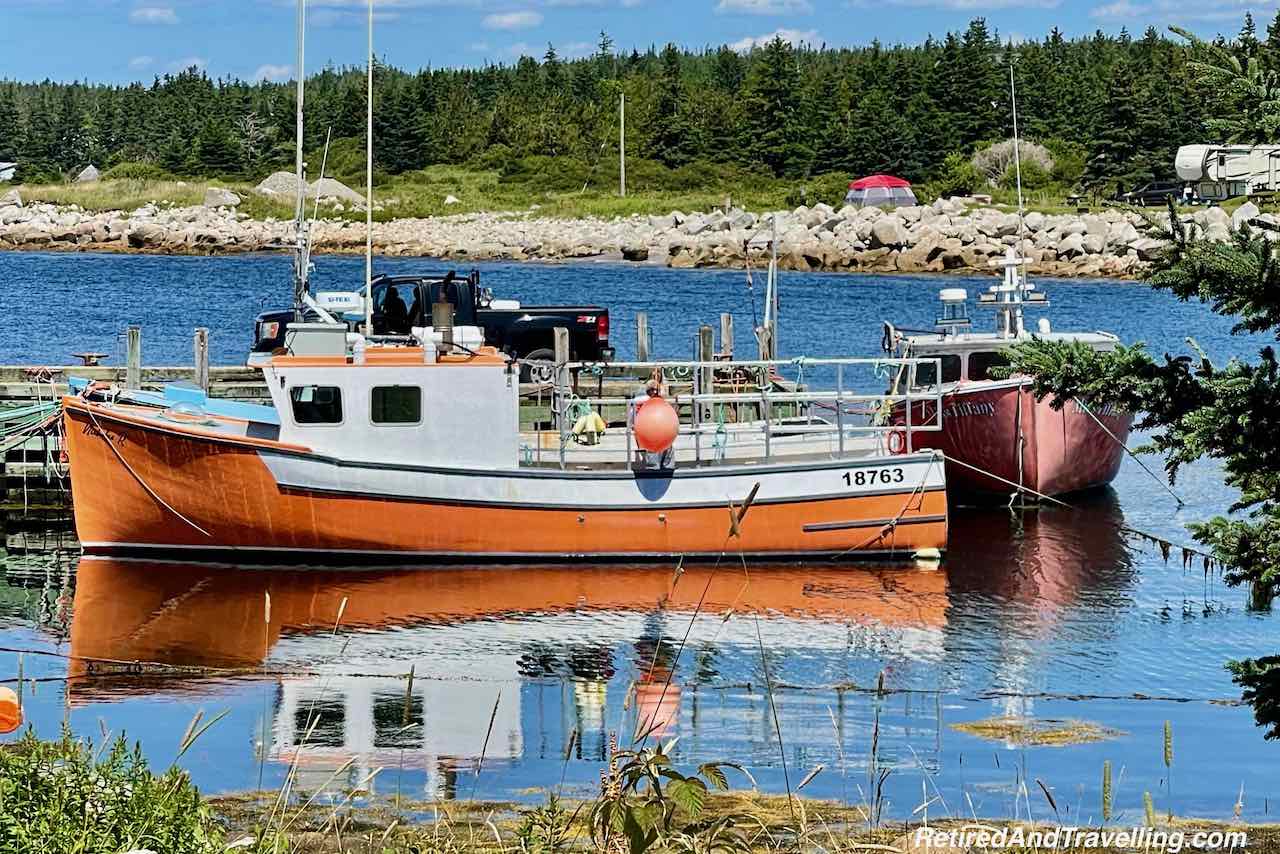 We saw we were on the right route when we saw a small lighthouse in the midst of a colourful rock painting on the side of the road.  As we got closer, we saw a sign that said this was the Peggy Of The Cove Museum. 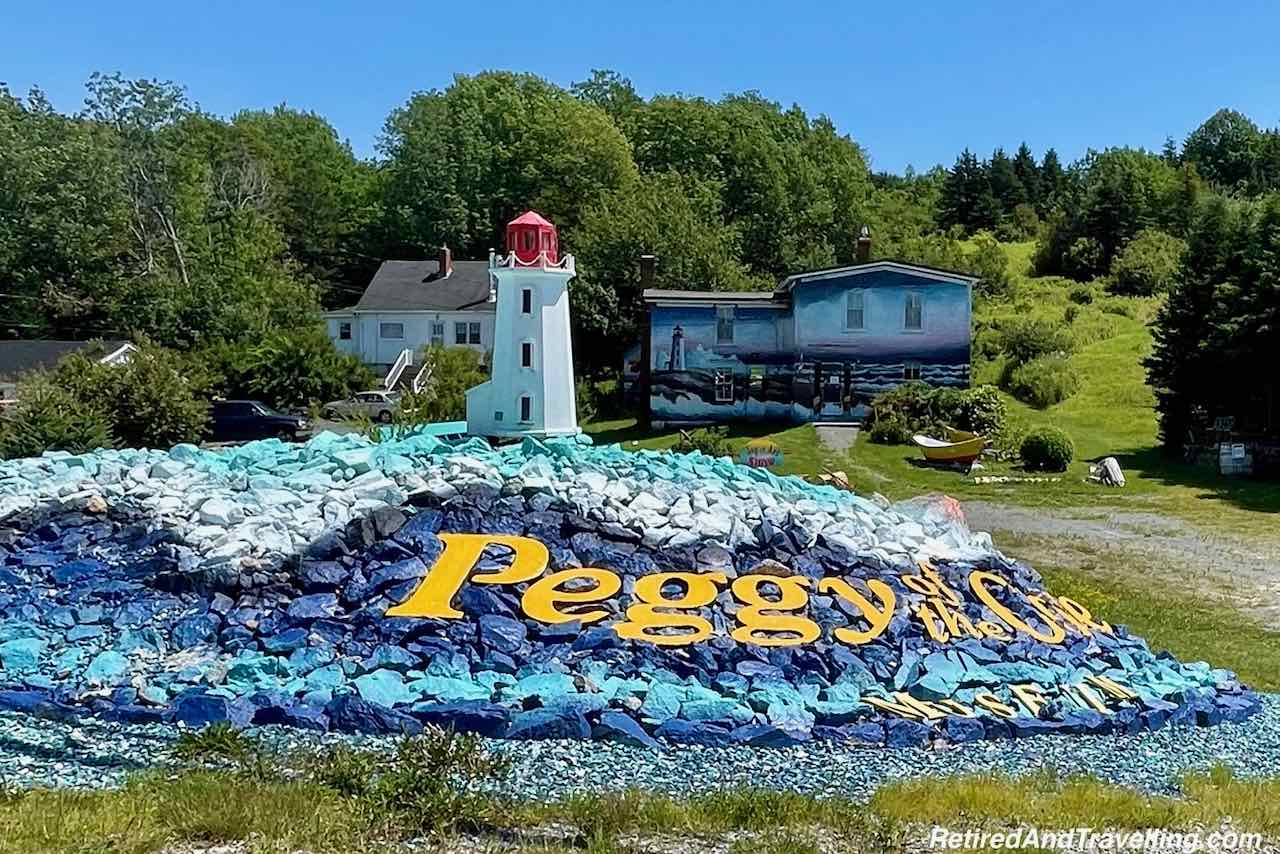 This museum provided more information about the rescue of the sole survivor when a Schooner hit Halibut Rock off Lighthouse Point in the mid-1800’s.  This is the Peggy of Peggy’s Cove.

On this visit to Peggy’s Cove we had lots of stops on our road trip day.  So did not have time to stop at the museum.

As soon as we entered the small town of Peggy’s Cove we knew we would be delighted.  Charming and colourful buildings surrounded us.  A Visitor Information Centre provided more information about the area. 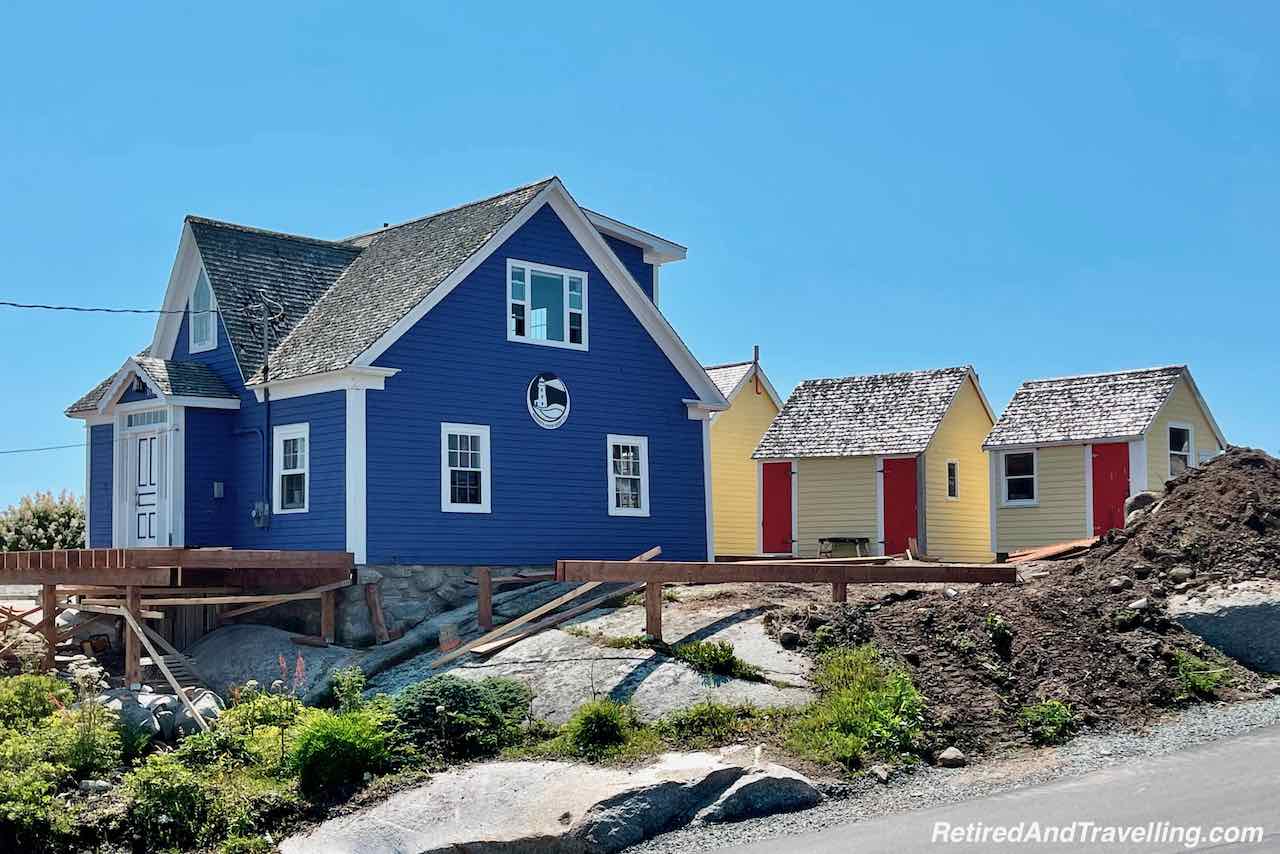 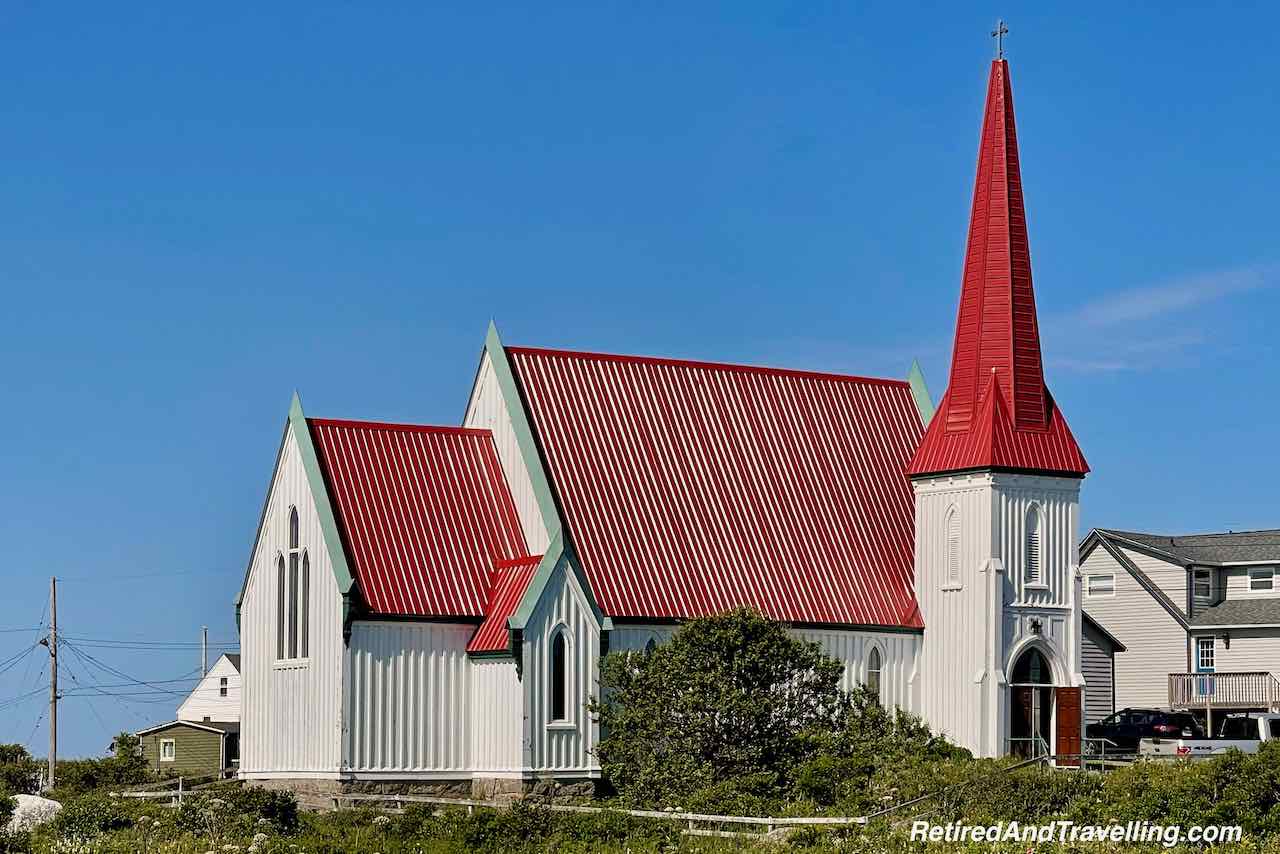 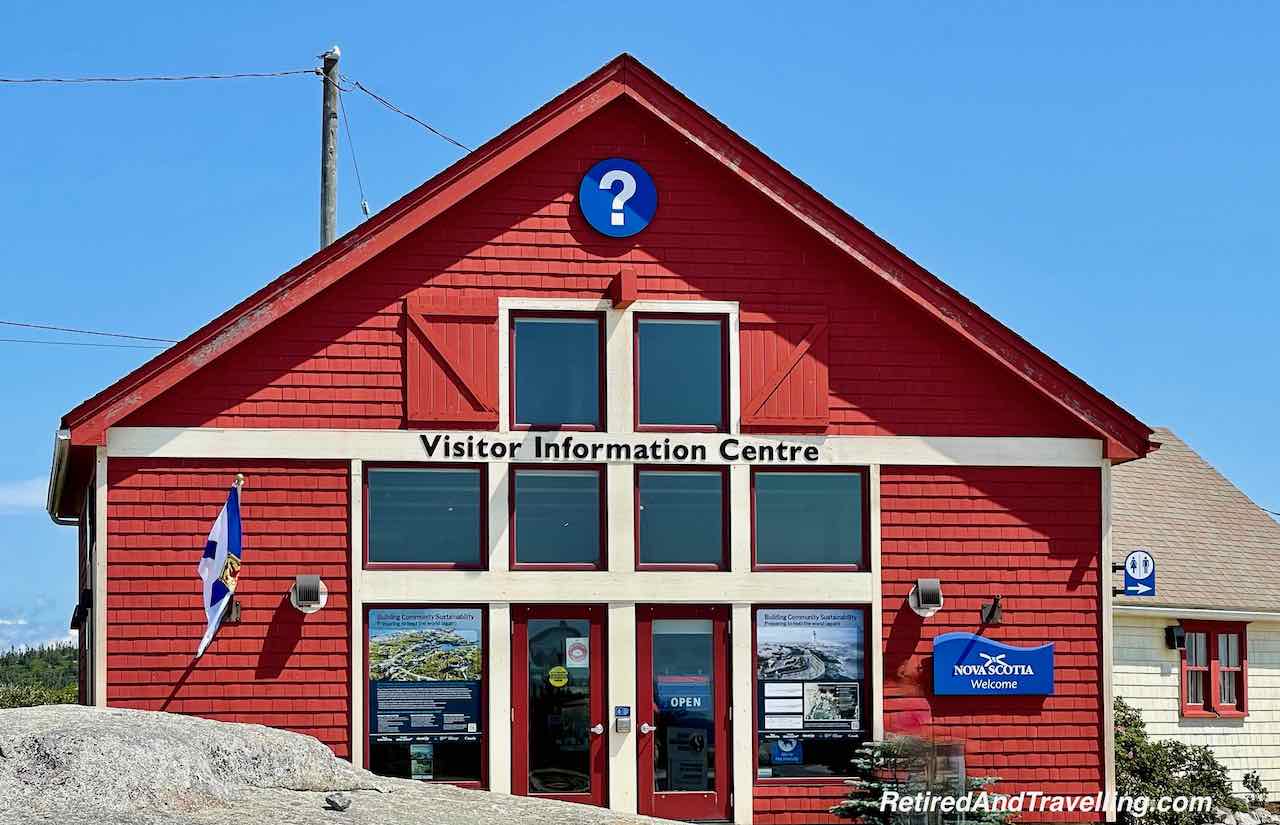 We found the small port and were entranced with the typical fishing village scene we found.   A set of brightly hued chairs were positioned for the perfect view.  Colourful boats lined the harbour.  Fishing floats and lobster traps covered the docks. 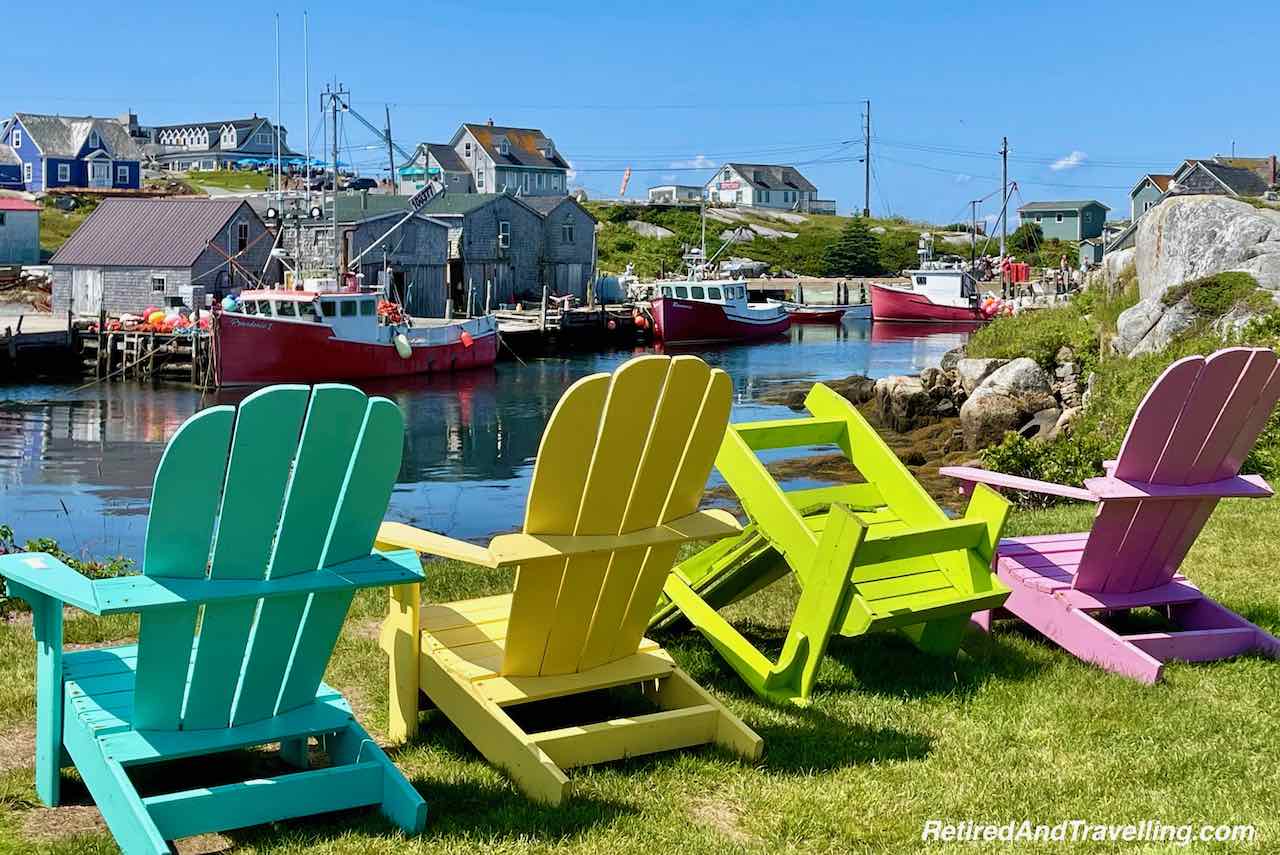 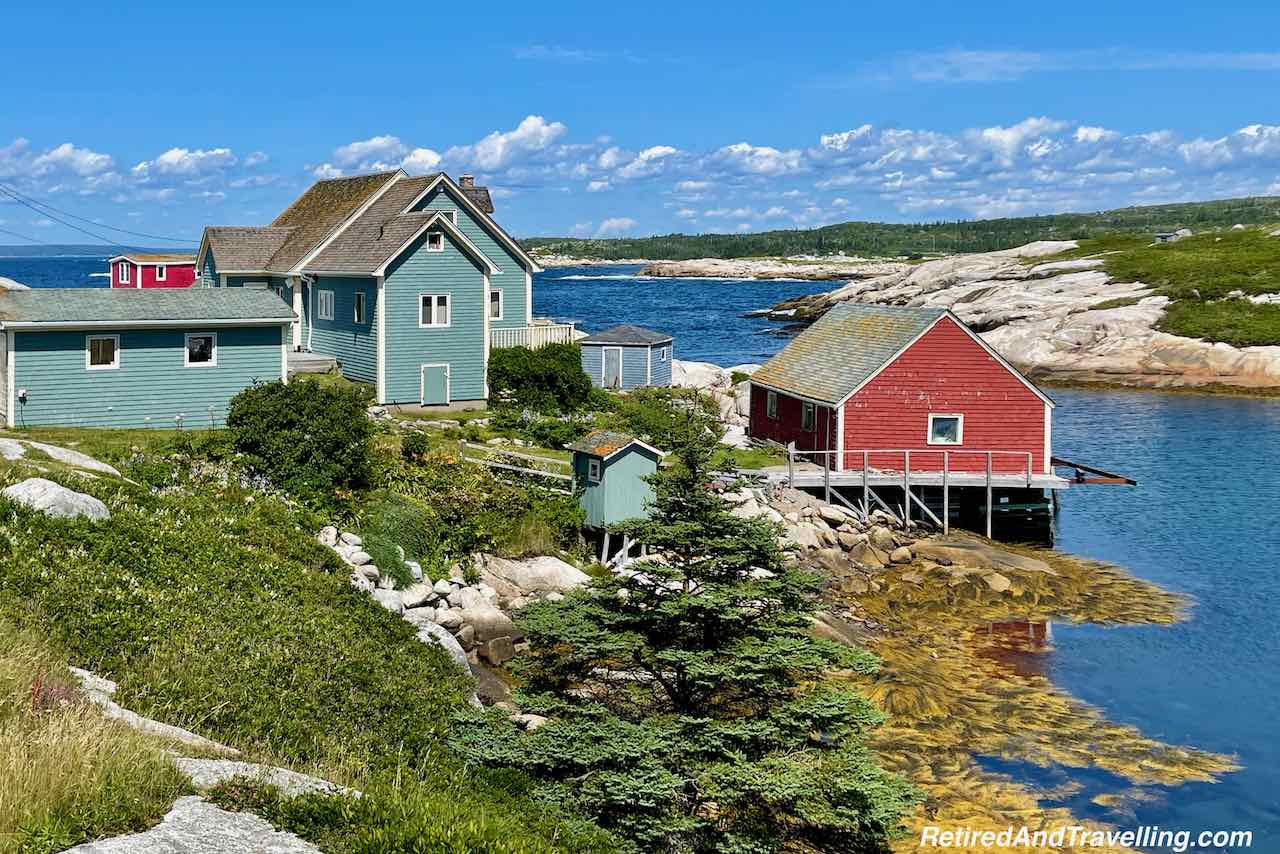 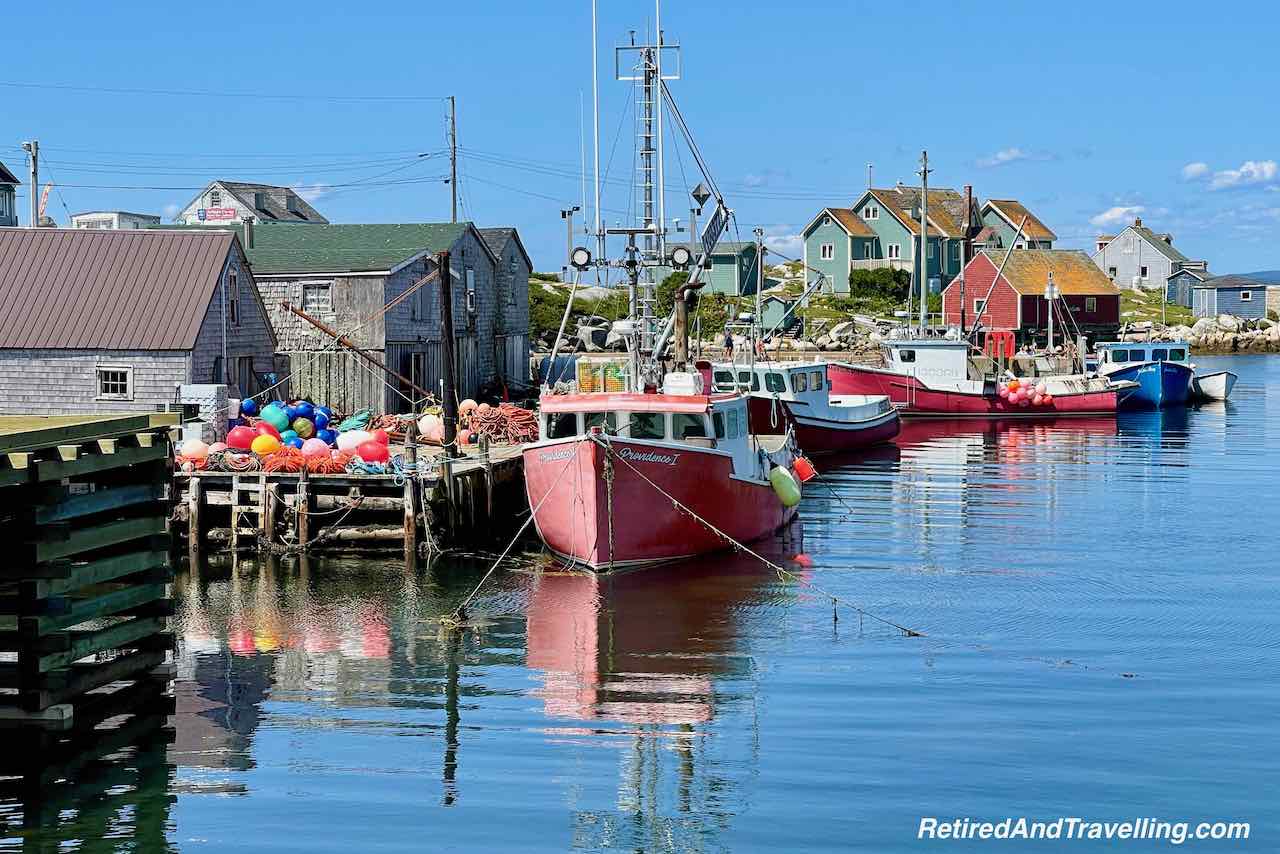 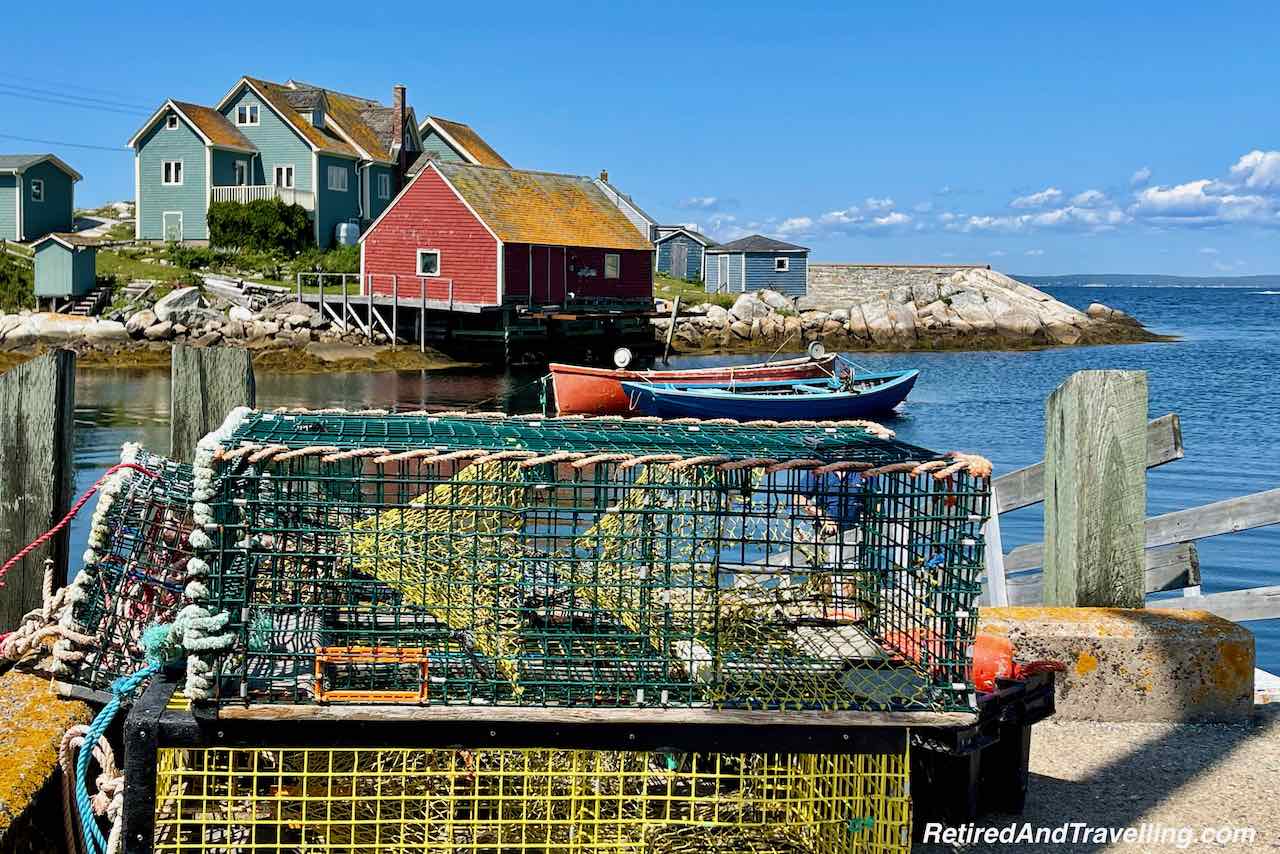 Our first view of Peggy’s Cove in Nova Scotia charmed us.

We headed for the point and soon got our first view of the iconic lighthouse on the rocks.  A path led towards the lighthouse.  But it was soon evident that this visit meant a walk on the rocks.  Signs everywhere warned of the danger. 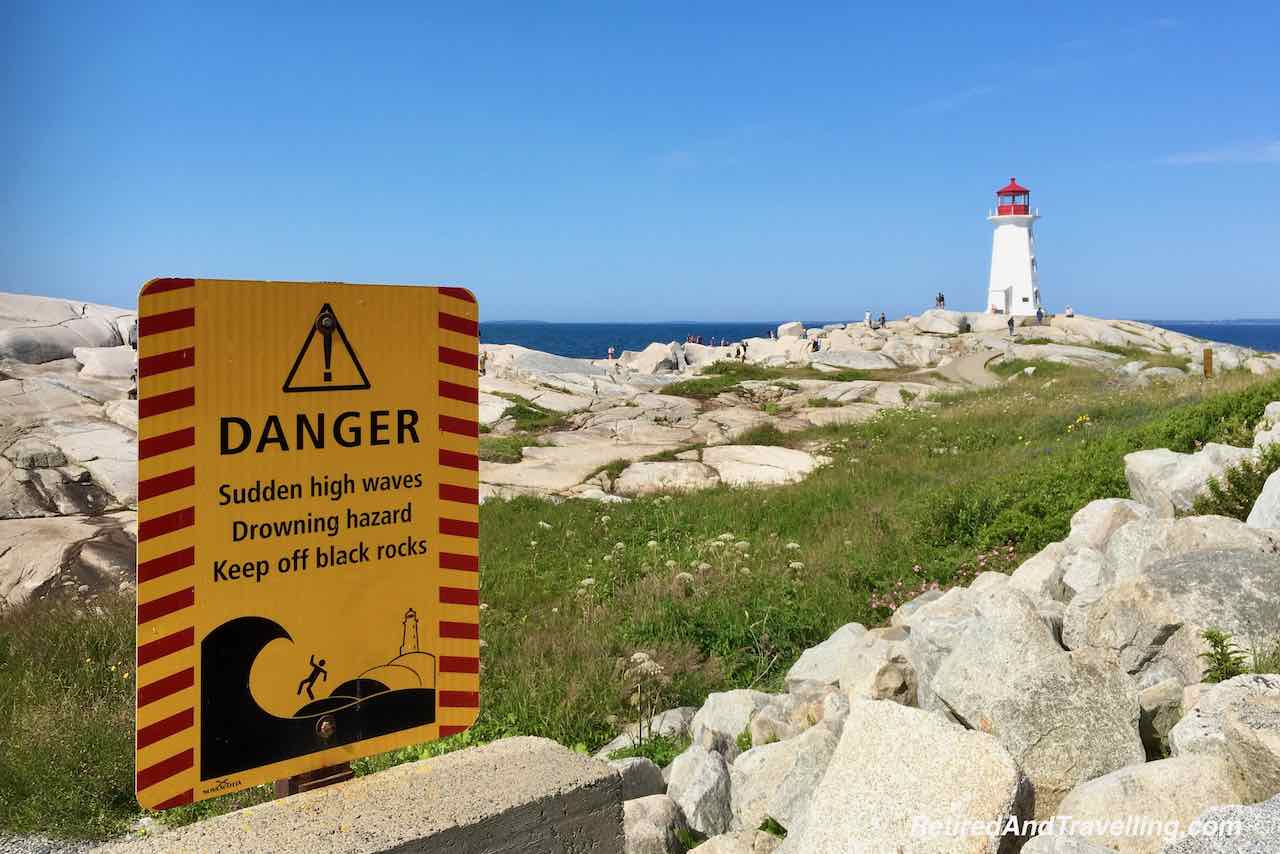 After we enjoyed the view from afar, we walked out on the rocks for a closer view.  We saw the waves as they crashed on the shore. 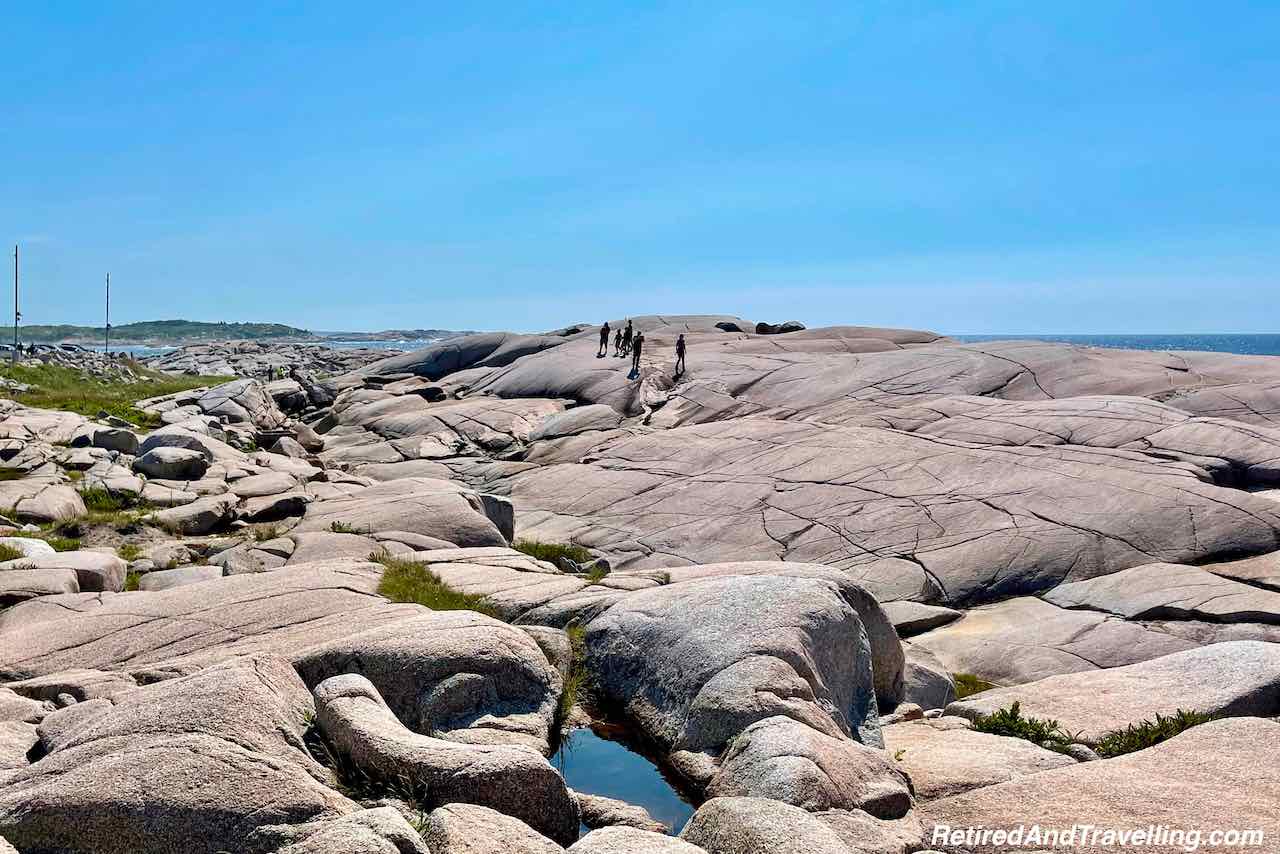 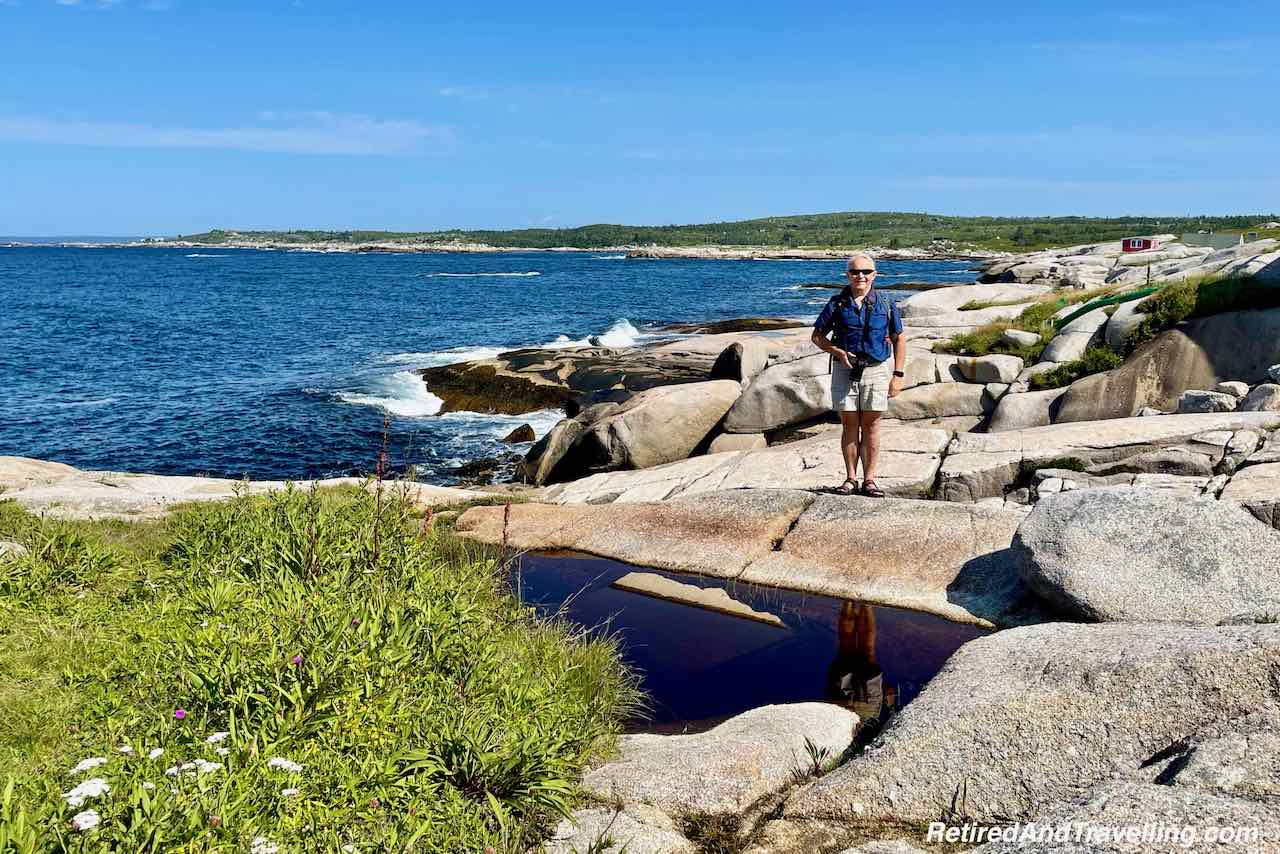 When we got close we heard music.  A woman sat on a chair under the lighthouse and entertained the crowd with accordion music. 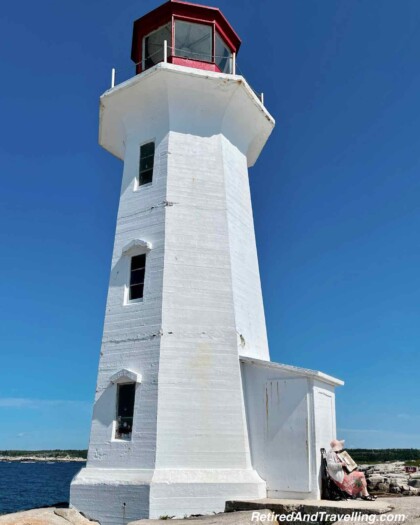 When we walked around we saw a new platform under construction out over the rocks.  This platform provided a new spot for views of the iconic Peggy’s Cove lighthouse without scrambling out on the rocks. 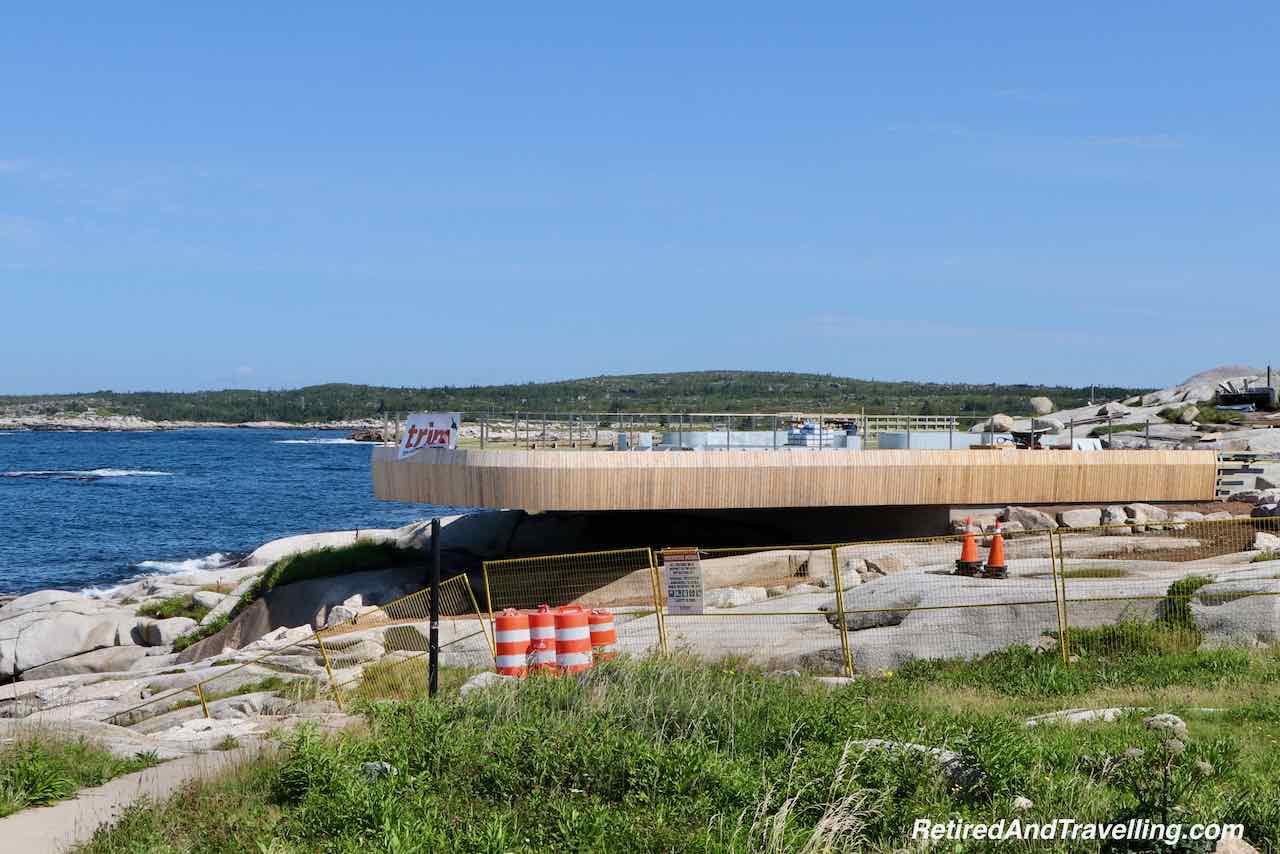 The SouWester Restaurant was located right at the lighthouse.  We grabbed a table outside in the sun and enjoyed our last view. 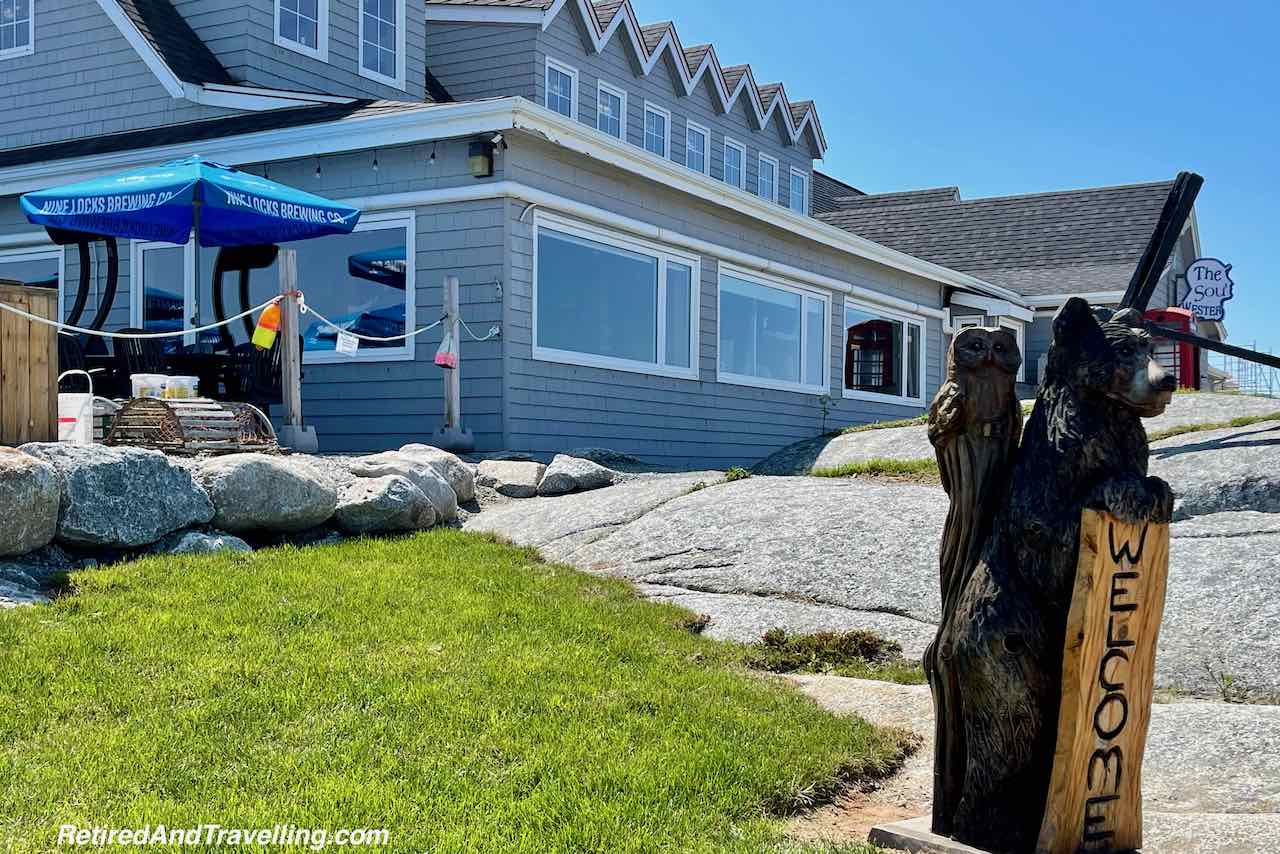 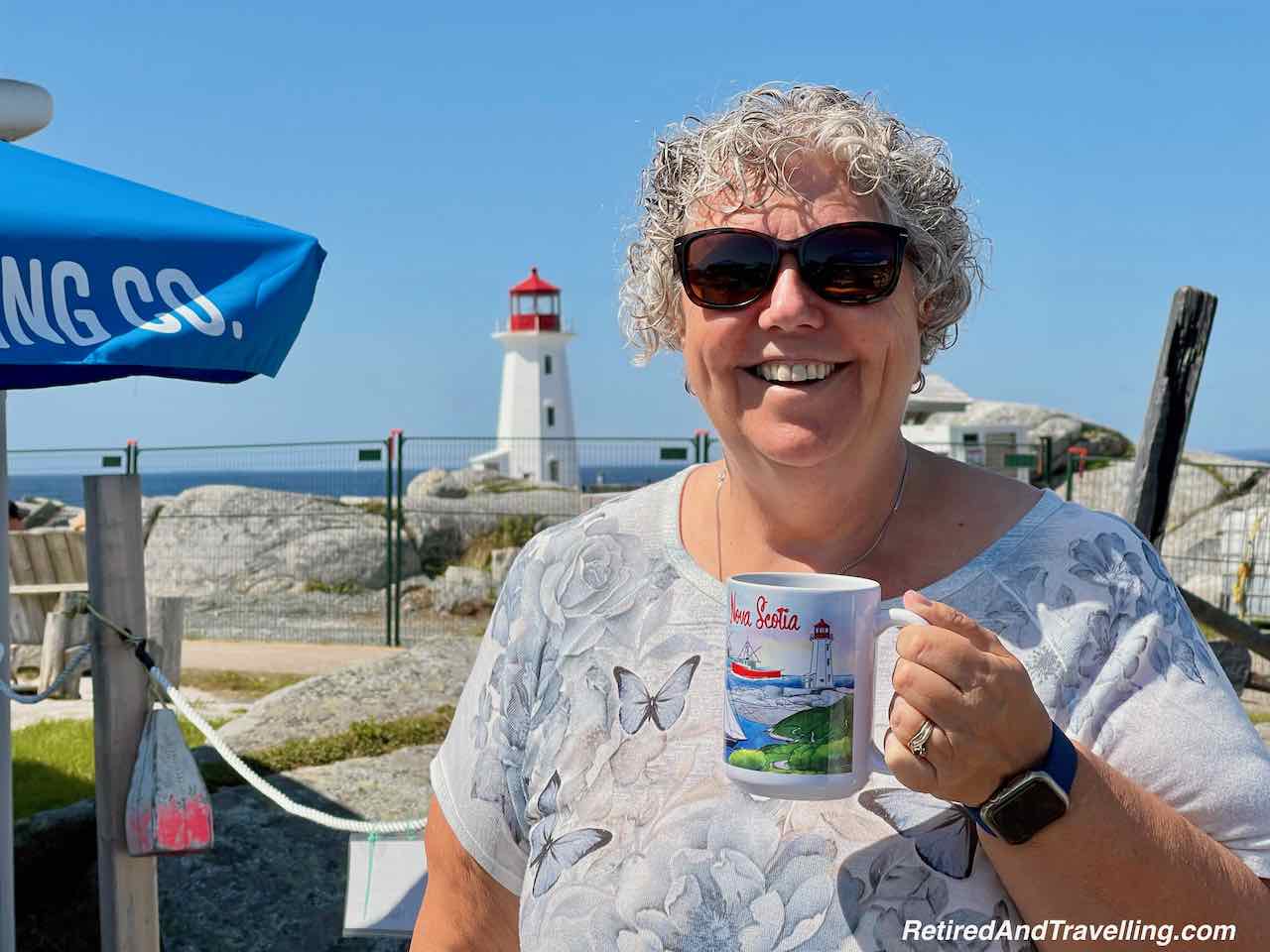 On a visit to Peggy’s Cove in Nova Scotia the view of the lighthouse out on the rocks was the iconic image we could not miss.

An Artistic Stop In Peggy’s Cove In Nova Scotia

There was one more artistic stop in the small town of Peggy’s Cove.  Across from the Visitor Information Centre we saw the William DeGarthe Art Gallery.  We did not have time to wander and see the art inside.  But we did not want to miss the outdoor display. 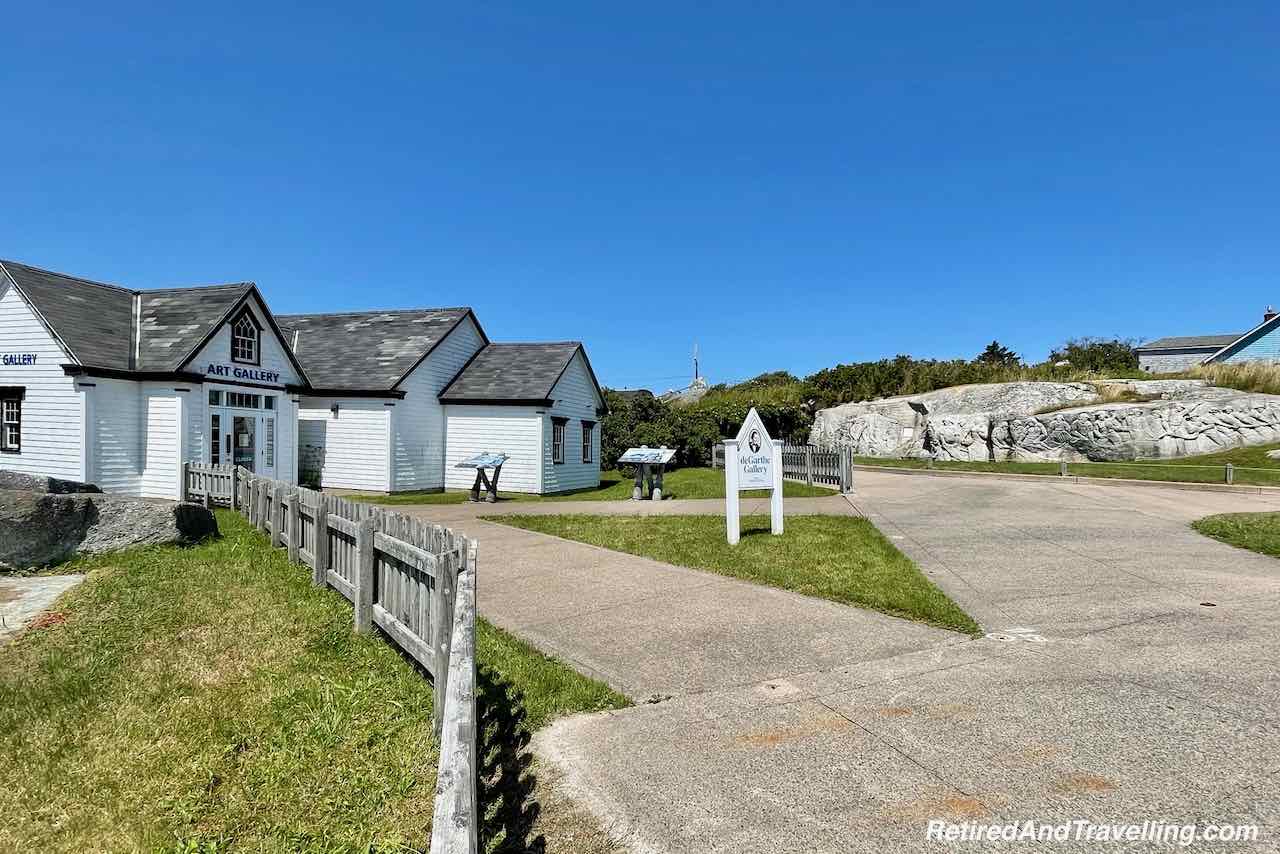 A long 100 foot stone wall was the canvas used to create the Fisherman’s Memorial.   This monument to Nova Scotia fishermen showed 32 fishermen, their wives and children, St. Elmo with wings spread, and the legendary Peggy of Peggy’s Cove. 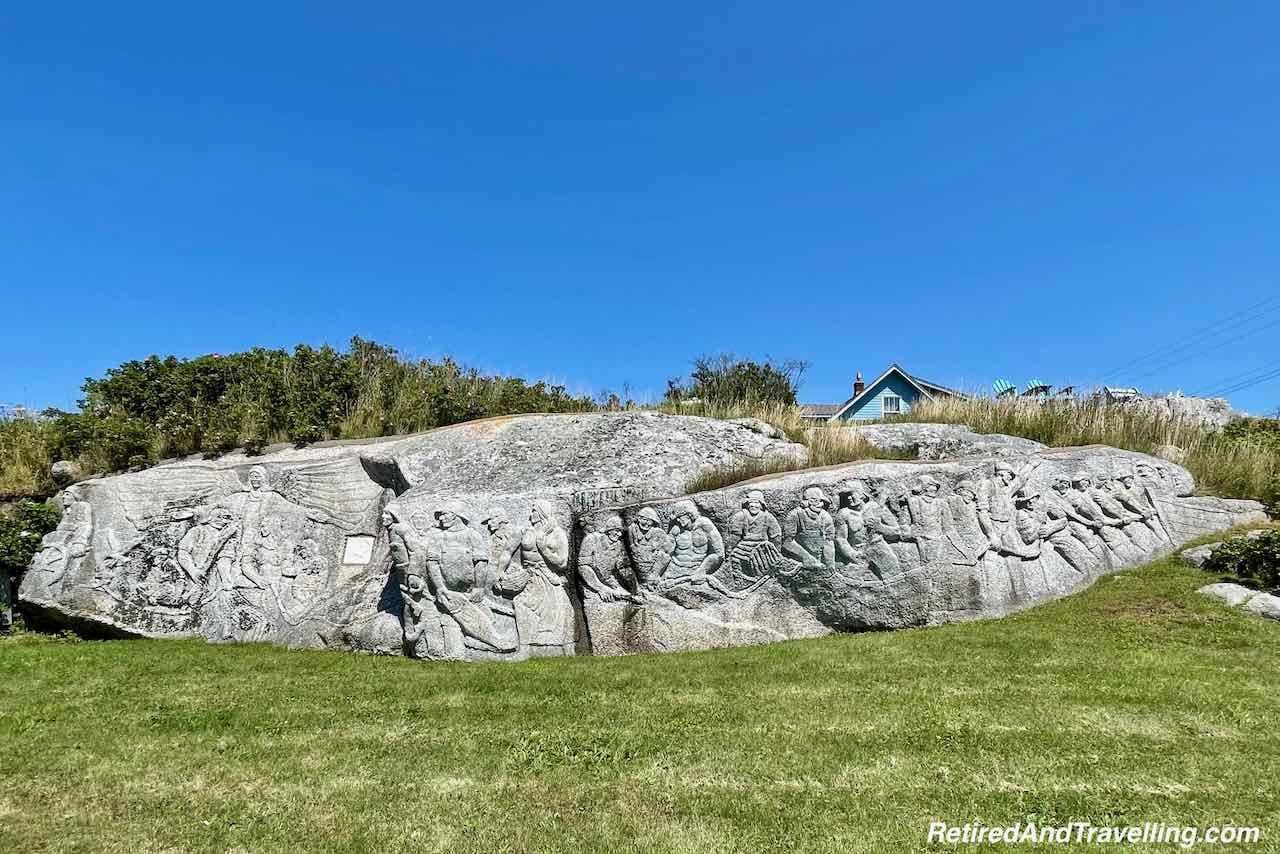 When we visited Peggy’s Cove in Nova Scotia we found so many great things to see.

When we left we headed along the coast.  Off in the distance we was the lighthouse out on the point of rocks. 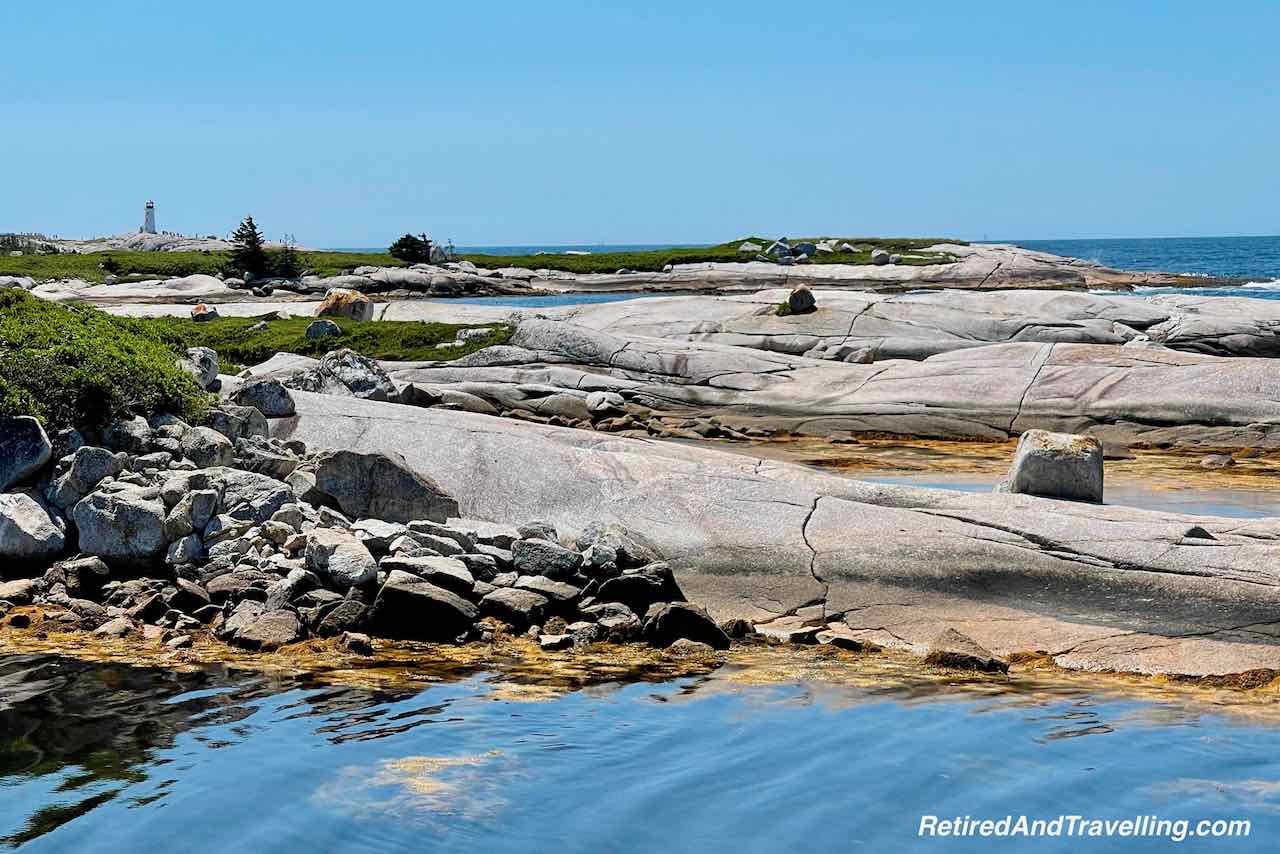 On our way out of Peggy’s Cove we had one more stop to make.  The Swissair Memorial Site commemorated the 229 people on SwissAir flight 111 that crashed into the sea just off the coast of Bayswater near Peggy’s Cove in 1998. 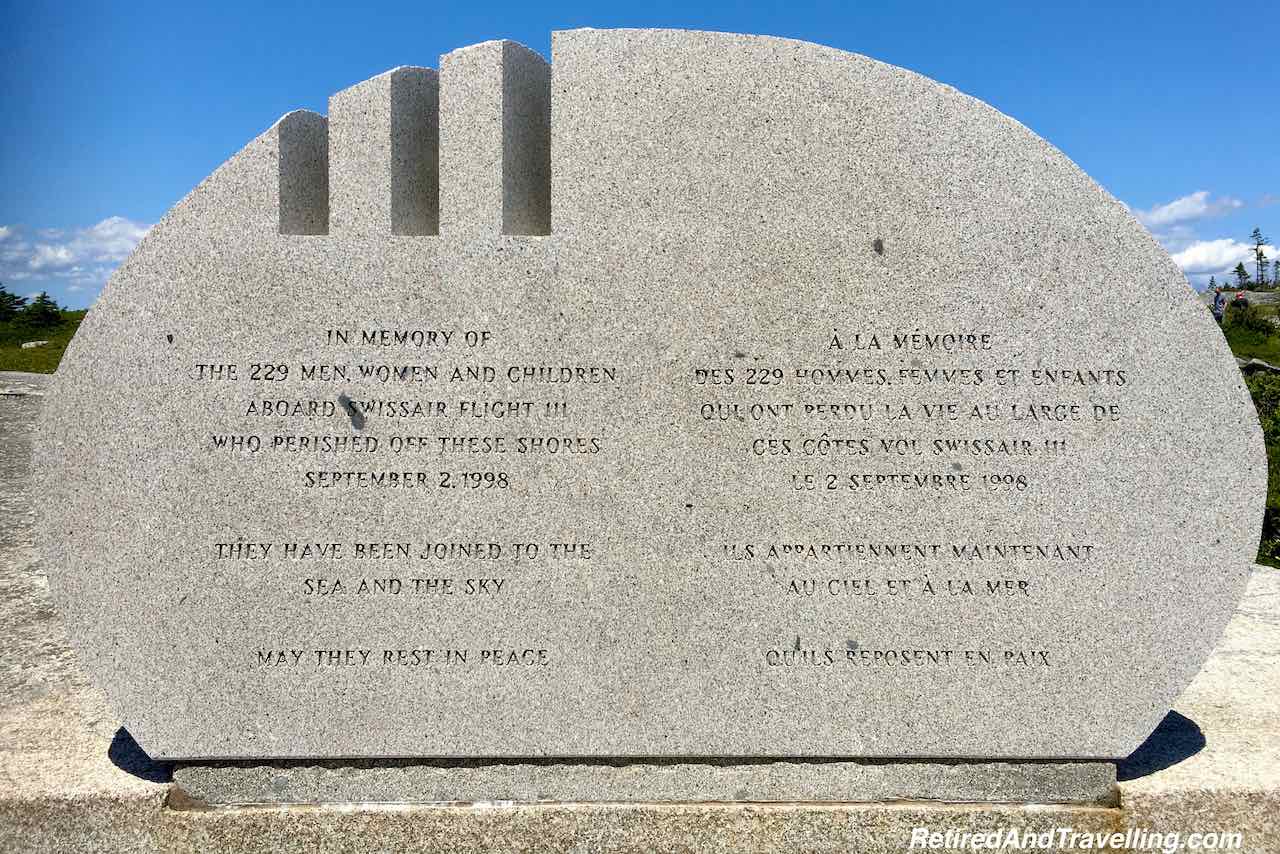 As a Naval Clearance Diving Officer, David was part of the huge military and civilian operation involved in recovering both the victims and the aircraft wreckage from the seafloor.  Many of the vessels involved used Peggy’s Cove Harbour as a berth. So it was fitting that we stopped to remember a time in history that was very personal for David.

On a visit to Peggys Cove in Nova Scotia, we paused for a moment.

A Great Visit To Peggy’s Cove In Nova Scotia

On a day trip from Halifax, we enjoyed a stop at Peggy’s Cove in Nova Scotia.  We saw the iconic lighthouse on the rocky point.

But we found more than just the lighthouse!  We saw the local museum that provided insight into the “Peggy” behind “Peggy’s Cove”.  The quaint, colourful village and port delighted us.  And we even visited the SwissAir Memorial site.

Did you visit Peggy’s Cove in Nova Scotia?  Were you glad you visited this iconic site? 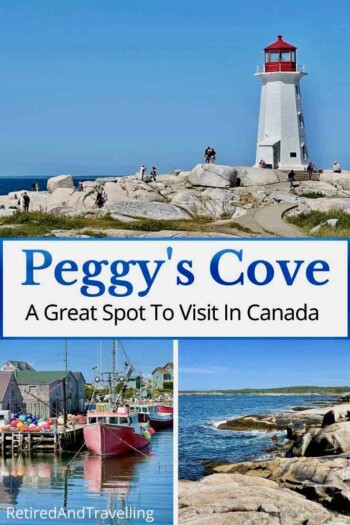 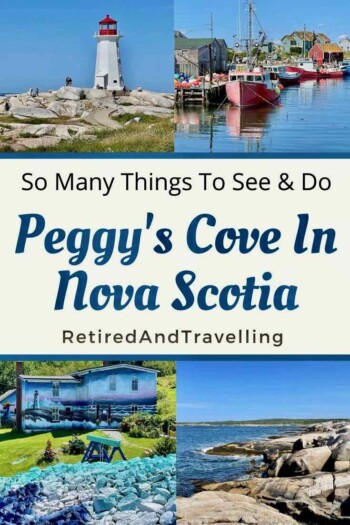 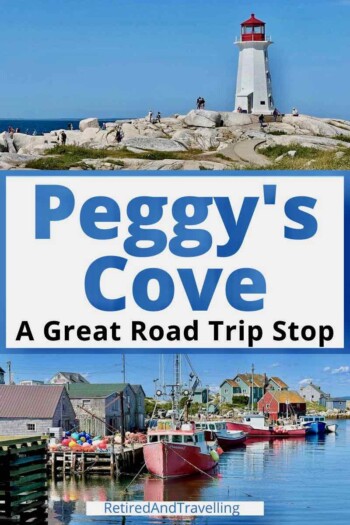 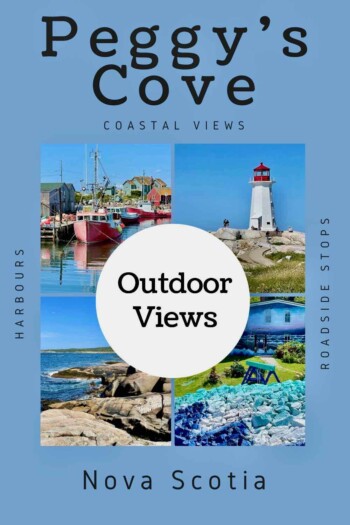